When it comes to eating sashimi in Tokyo, fish is by far the most ubiquitous offer. But it’s not the only one. Restaurants also serve shikasashi (deer), basashi (horse), and — perhaps most hotly debated of all — torisashi (chicken). The name loosely translates to “raw bird,” and it’s exactly what it sounds like: thinly sliced raw chicken breast served with a flavorful salt or sauce.

I never thought I’d order raw chicken sashimi-style. Like most Americans, I grew up deeply terrified of salmonella, to the point that it became a personified monster. As a chef, I learned that undercooked chicken is a cardinal sin (I nearly failed a culinary school exam when I undercooked a chicken by three degrees Fahrenheit). But in Japan, a country with a palate for rawness, it seemed fair to give it a try.

In Japan, eating raw meat, fish, and eggs is just a part of the food culture, which values simplicity and reveres ingredients more than preparation. Tokyo, in particular, is famous for its food scene. The city itself seduced me as soon as I saw it from the plane: an enormous orange sun setting over a city that looked like seven separate New York skylines.

I went to dimly lit tempura bars, ate baby clams floating in a bowl of hot miso, and consumed thick tsukumen ramen (cold noodles dipped in broth) in a room silent except for the slurping. Then there was the cod sperm, sticky nattō (strong-smelling fermented soybeans), and raw eggs cracked over rice. Raw chicken didn’t seem all that strange in context surrounded by Tokyo’s many styles of restaurants. 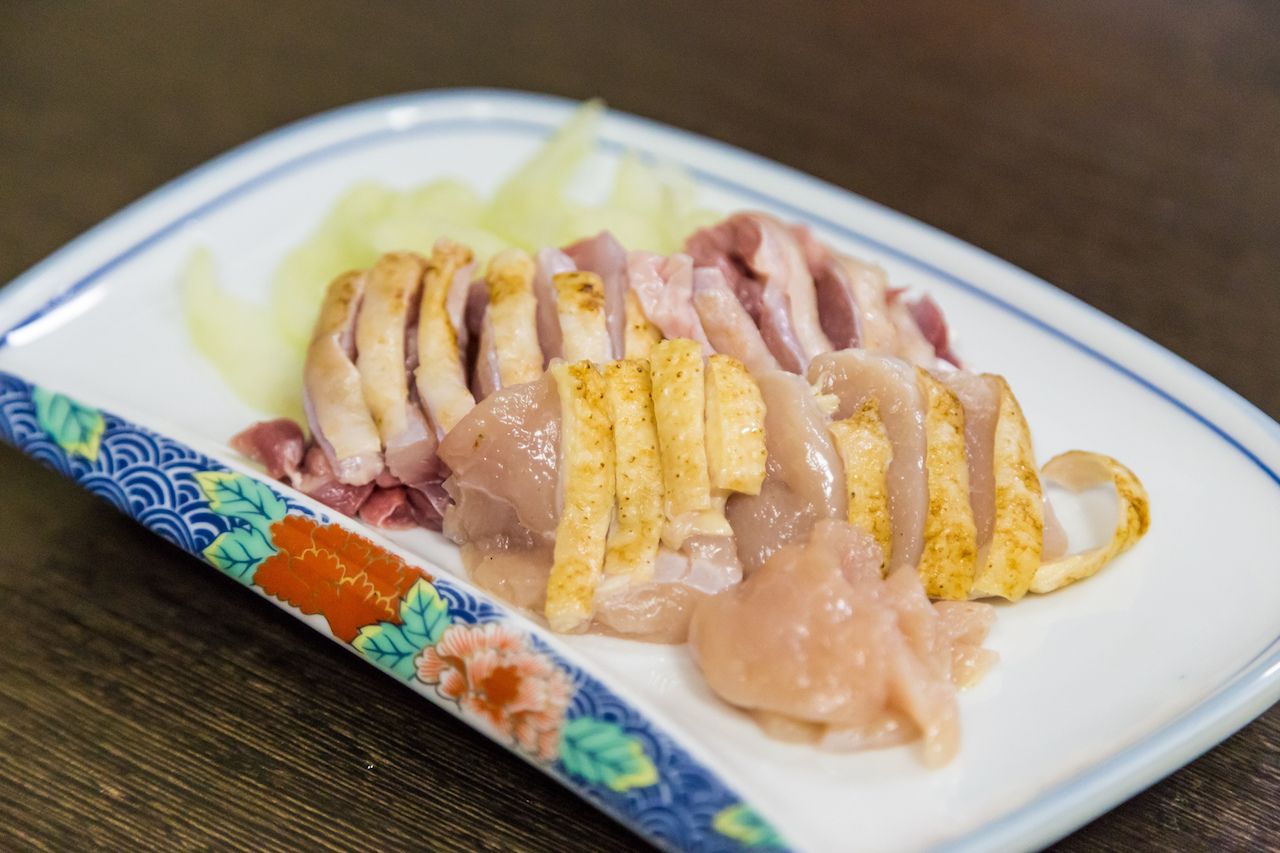 The question of salmonella and campylobacter (another common raw meat bacteria) is a complicated one. Because salmonella lives in a chicken’s intestinal tract, careful slaughter and butchery are hugely beneficial in preventing the spread of salmonella. Still, food poisoning from raw chicken is far from rare. In the US, more than a million people get ill from salmonella annually. Salmonella is prevalent in Japan as well, and campylobacter is responsible for 60 percent of food poisoning cases in the country. High-end yakitori restaurants, however, take special care to source chicken clean enough to eat raw.

In fact, torisashi is a staple at Tokyo’s yakitori restaurants. Yakitoris are famous for skewers (particularly chicken) cooked over open-flame charcoal grills. You’ll find literally every part of the bird — gizzards, spleen, even three types of cartilage — and torisashi is just another way to showcase the meat. On menus, there are three options: torisashi (fully raw), toriwasa (broiled less than 10 seconds), and chicken tartare.

I first gave it a try at Toriyoshi, a basement yakitori joint in Tokyo’s Minato neighborhood. It was sliced thin, fanned out on a cold plate, and topped with grated ginger, shiso, and vinegar. The meat was soft, a bit sweet, and only lightly “chicken-y.” The texture is similar to raw tuna, and the subtle flavor of the meat is largely masked by the ginger. Sitting in a room surrounded by crowds of people slamming beers and sucking on half-cooked chicken thighs helped to soften, if not totally eliminate, my fear.

Torisashi comes from the chicken breast or tenderloin, the muscle furthest from the bird’s intestines, making it least likely to be infected with salmonella. Plus, yakitori chefs are meticulous to find the freshest, highest-quality meat. At most yakitori spots, the chicken is sourced from local farms and slaughtered almost immediately before it’s served. At Toriki, a favorite yakitori spot of the late Anthony Bourdain, chef and owner Kunio Aihara kills his chickens himself the morning before he serves them.

It’s obviously important to avoid eating raw chicken at home or anywhere unreputable. There’s one restaurant in the States that serves it: Ippuku, a highly acclaimed izakaya restaurant in Berkley, California, that serves a chicken tartare with raw quail egg. Other than that, stick to Japan. If you find yourself in Tokyo, these are a couple of spots to try raw chicken for the first time.

Note: A freshly killed and healthy bird that’s been properly processed and handled is much less likely to make you sick, but there are still risks involved. Anyone with a compromised immune system should avoid raw chicken, along with all raw meat, eggs, and fish.

Where to eat raw chicken sashimi in Tokyo

Toriyoshi: This basement spot is a bit hard to find in the northern part of the Minato neighborhood. It’s a decent walk from the Hiro-o subway station but well worth the journey. Climb down a winding staircase and through a curtained door to a warm, crowded room where the chefs will yell “Irasshaimase” in unison and motion you to sit down. Sit at the bar if you can, and order everything. In addition to grilled and raw chicken, try the lotus flower and gingko nuts. There’s a great Japanese beer selection, too.

Toriki: This place was featured on Anthony Bourdain’s No Reservations in 2008, and it’s worth the hype. The chef still kills his own chickens and sources them from farms that raise their birds indoors, keeping the meat tender and helping to prevent disease. He specializes in toriwasa, lightly seared breast meat served with small dollops of wasabi. English menus are available, making it tourist friendly without feeling touristy.

Birdland: This is one of Tokyo’s Michelin-starred yakitori joints, right next door to Sukiyabashi Jiro in the Ginza subway station. It’s typically tasting-menu-only, but if it’s not busy they’ll let you order a la carte. A little on the pricey side but worth it for a splurge.

Food + DrinkWhat It’s Like To Eat the World’s Stinkiest Fruit for the First Time
Tagged
Food + Drink Insider Guides
What did you think of this story?
Meh
Good
Awesome

The Best Places To Eat at Tokyo’s Haneda International Airport

The Most Luxurious Starbucks in the World Just Opened in Tokyo