Blue cheese can be divisive, but there’s no denying that some of the world’s most famous cheeses are blue. From gorgonzola to Stilton to Blue Vinny, the cheese style has a distinctive stinky and tangy quality that makes it popular with cheese fans and cheesemakers across the globe.

But what is it that makes a blue cheese blue? This is the story of how blue mold became the hottest mold in cheese.

Why blue cheese is blue

Before taking a single bite, people eat with their eyes. Then, more often than not, comes the smell. Blue cheese is notable on both fronts.

It’s not exactly clear when people invented the first blue cheese, but it is known that it’s an ancient style. Gorgonzola, for example, is believed to date back to 879 AD. Different countries seem to have come up with methods of creating blue cheese at different times, but each has a story about someone forgetting about some cheese in a cave. One of the more popular stories is that a drunk cheesemaker left a loaf of bread in the cave which attracted mold that spread to the cheese. He tried it, and considered the cheese improved enough to try and purposefully recreate it. For the earliest blue cheeses, the method of just forgetting about it until mold set in isn’t that far off from what works.

Blue cheeses get their color, smell, and taste from veins of Penicillium mold. In the past, the mold likely entered the cheese first accidentally, and then somewhat randomly, in cheese caves that naturally contained specific types of fungi. Today, blocks of cheese are spiked (or “needled”) with steel rods to let oxygen and mold spores settle in. The cheese is then left to mature for three to six months, giving the Penicillium time to grow inside. After it has worked its magic, the cheese is creamier and fuller in flavor.

The Penicillium changing the flavor of your cheese isn’t exactly the same one curing disease. The life-saving one is Penicillium chrysogenum, while the two most common varieties of Penicillium for blue cheeses are Penicillium roqueforti (named after the French town of Roquefort where cheese of the same name is made) and Penicillium glaucum.

Extra moldy cheese has come a long way since its early spontaneous spores and cave-aging days. Different styles are now made with milk from sheep, cows, and goats in nearly all of the great cheesemaking countries, including France, Italy, England, and the US. These are the five best to try. 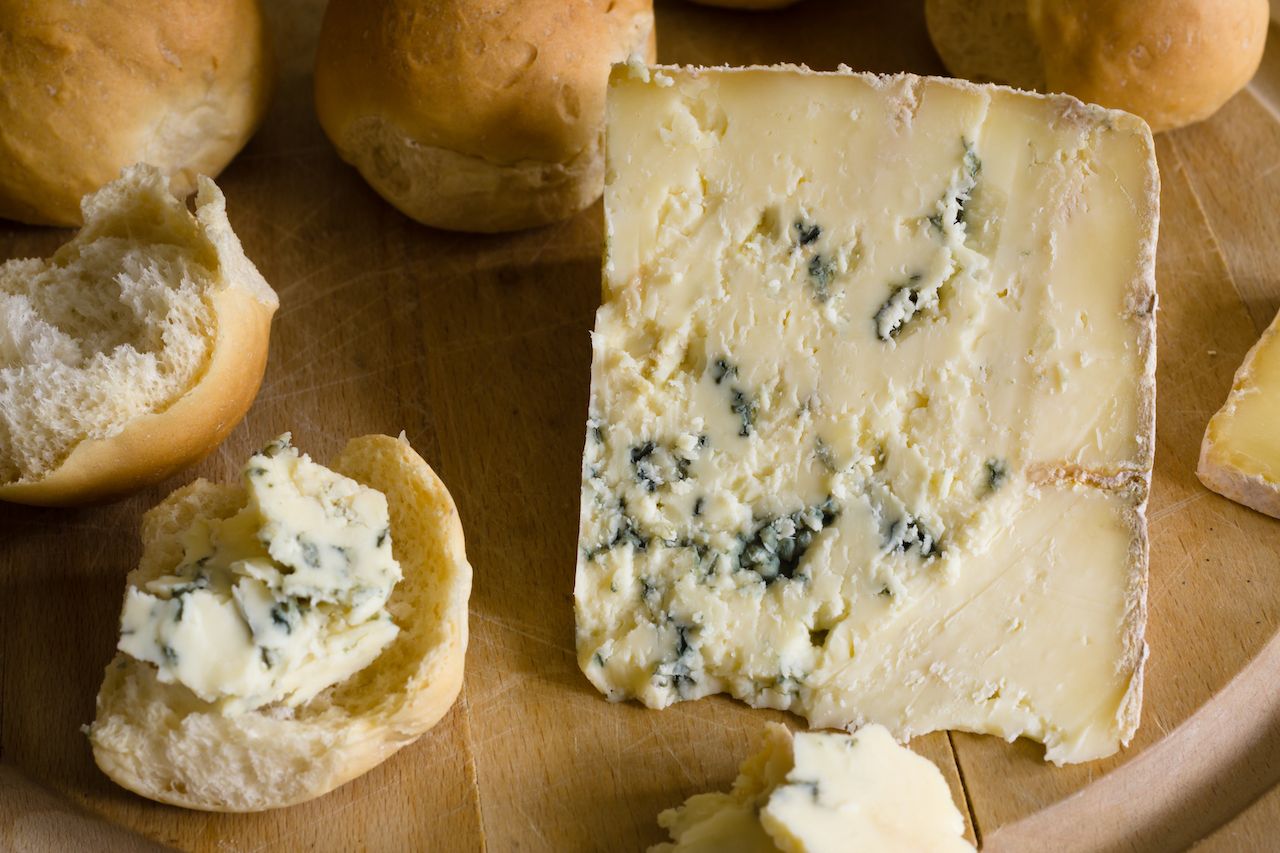 Dorset Blue Vinny: This award-winning British cheese is made from a 300-year-old recipe that was nearly lost around the time of World War II. It’s recently been reintroduced, and now is a protected cheese that, by European Union law, can only be made in the region around Dorset. In the past, many women on the farm made Blue Vinny (vinney is an old English word for mold), and often got the mold in the cheese through some unsavory methods like dirty horse harnesses and slug slime. Thankfully, the methods used today are far more hygienic. The only current producer is Woodbridge Farm, which makes an award-winning cheese with a rich and creamy flavor.

Stilton: A cheese that came from the east of England sometime during the 17th century, Stilton was developed over time into the semi-hard blue cheese it is today. The first known recipe dates back to 1723. The blue mold appears to have happened by accident. In 1724, writer Daniel Defoe of Robinson Crusoe fame tasted the cheese and wrote that he, “pass’d Stilton, a town famous for cheese, which is call’d our English Parmesan, and is brought to table with the mites, or maggots round it, so thick, that they bring a spoon with them for you to eat the mites with, as you do the cheese.” Today, Stilton cheese lacks the mites and maggots, but is famous for its distinctive flavor and blue-veined crumbly appearance.

Gorgonzola: This cheese is produced near Milan, Italy, and is one of the oldest blue cheeses. Legend has it that a young man went off in pursuit of his lover and forgot to drain his cheese curds. The next day, he mixed the curds and tried to save them, but the resulting cheese had the blue-green veins of mold after aging. One thing led to another and he and others ate the cheese anyway. Now gorgonzola is one of the better-known cheeses of Italy and the world. 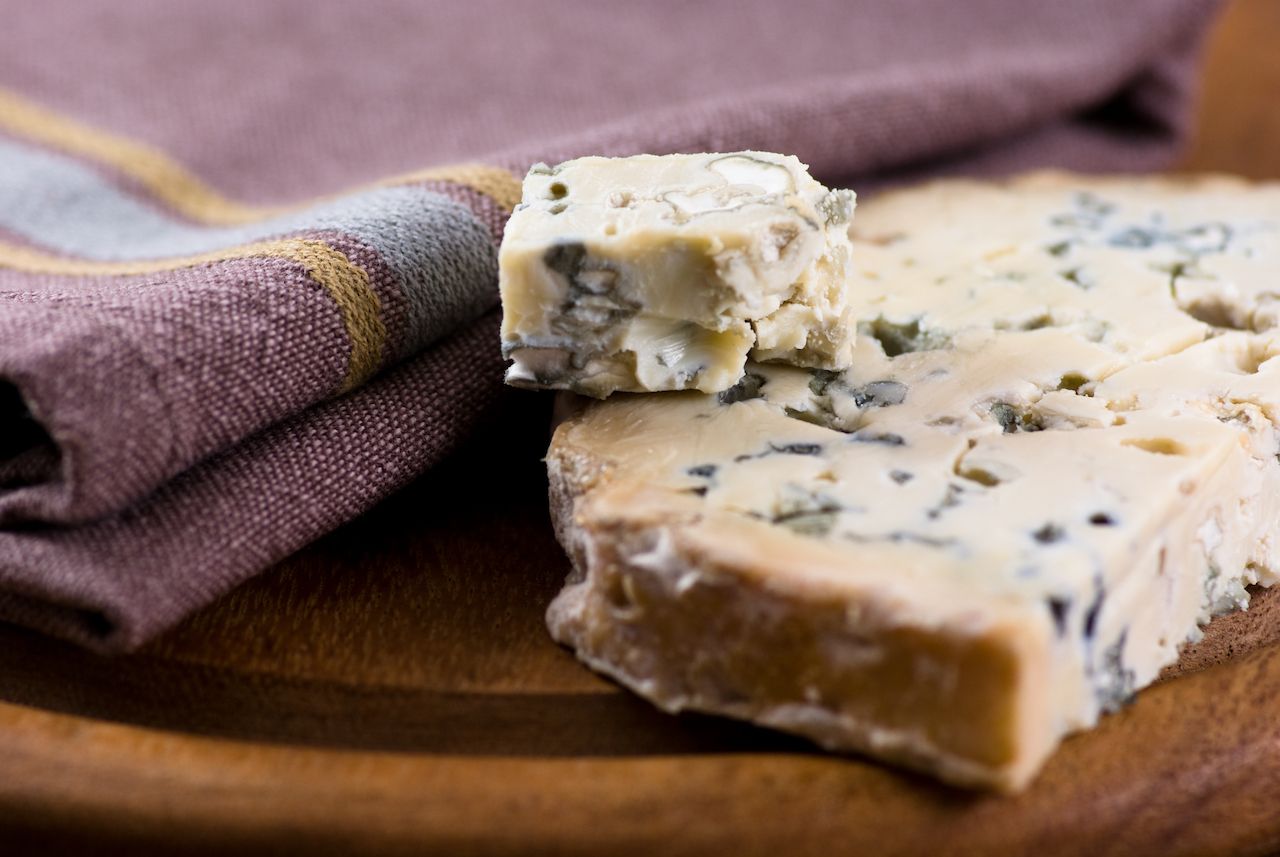 Fourme D’Ambert: Dating back to Roman times, Fourme D’Ambert is one of France’s oldest cheeses. It’s semi-soft, and matures for 40 days before the Ambert cheesemakers store it in caves where the cheeses are aged for two to three months. Along with Penicillium roqueforti spores, the cheese is aged with a sweet white Vouvray wine.

Blue brain cheese: Sometimes it’s the least appetizing foods that taste the best. Blue brain comes from Switzerland and gets its name because it looks like, well, a brain covered in a thick layer of blue mold. It was created by a family in Bern using milk from indigenous Swiss cows. The family formed balls of cheese and left them to mature in a cave like they did many times before, as the story goes, but they forgot about this particular batch while it was aging. When they retrieved it, it had ridges like a brain, and instead of tossing it, they ate it. Now it’s one of the moldiest cheeses you can find in the world.

Food + DrinkThis Norwegian Cheese Is Officially the Best in the World
Tagged
Food + Drink
What did you think of this story?
Meh
Good
Awesome