When Jane Goodall first set foot in Tanzania’s Gombe Stream National Park, neither the park nor the country existed. Tanganyika had not yet gained independence from Great Britain, and the forest on the shores of Lake Tanganyika was then called Gombe Stream Game Reserve.

Goodall arrived in 1960 after accepting an invitation from paleoanthropologist Dr. Louis Leakey to assist him in studying chimpanzees. She was 26 years old and had no relevant degree but possessed a curiosity that Leakey thought could benefit his study. He was, undoubtedly, correct.

During her visit, Goodall made two observations that fundamentally changed the way we view chimpanzees, which in turn opened the door to better understanding human evolution. First, she noticed that they ate insects and other animals, refuting the theory that the great apes were vegetarians. Later, she witnessed one chimpanzee, David Greybeard, make tools to extract termites from a mound, disproving the idea that human beings are the sole toolmakers.

That first year in Gombe paved the way for both Goodall’s future and the future of primatology. Goodall also paved a path through Gombe Stream National Park for intrepid travelers and wildlife enthusiasts. Here’s how adventurers can slip into Goodall’s formidable shoes and follow in the footsteps of the chimpanzees she adores.

Get a Gombe overview at Jane’s Peak.

Gombe Stream National Park is located in northwestern Tanzania, just south of Burundi and across Lake Tanganyika from the Democratic Republic of the Congo. Kigoma is the nearest town. Visitors can fly in from Arusha or Dar es Salaam and take a 10-minute boat ride to the park, which is one of Tanzania’s smallest at roughly 20 square miles.

To take it all in as Goodall did, begin your Gombe tour with a hike to her favorite vantage point, which she referred to as The Peak. In her early days, Goodall retreated to the park’s highest hill to observe its chimpanzees from afar so as not to startle them with her presence. She spent countless patient hours at The Peak with binoculars or a telescope in hand. It was there that she saw David Greybeard rooting around for termites using a twig he’d fashioned into a tool, marking her first major primatological discovery.

Today, Jane’s Peak, which can also be toured virtually on Google Earth, has a small seating area where visitors can enjoy their very own introductions to the park and its great apes.

Get to know the park at the Gombe Stream Research Center.

In 1965, a few years after her initial trip, Goodall founded the Gombe Stream Research Center in the park, where she served as the scientific director from 1967 to 2003. During the latter half of her directorial career, she also served as the director of research on the behavior of the park’s native olive baboon.

Since it opened, the center has welcomed graduate students to assist with the chimpanzee study and gain experience with hands-on primatology fieldwork. Students still rotate through, but the center has grown considerably from a training facility to a fully fledged research center, where Tanzanian field workers and international researchers study chimpanzees and other primates, including the olive baboon, year-round. Goodall still visits the research center and participates annually, though she’s no longer involved in daily operations.

Visitors are welcome at the research center, and visiting is essential to any trip aimed at familiarizing travelers with Goodall’s experience at the park. Before embarking on a chimpanzee safari, stop by the center to get a sense of the work that Goodall pioneered and is still being done.

Get acquainted with the Kasakela chimpanzee community. 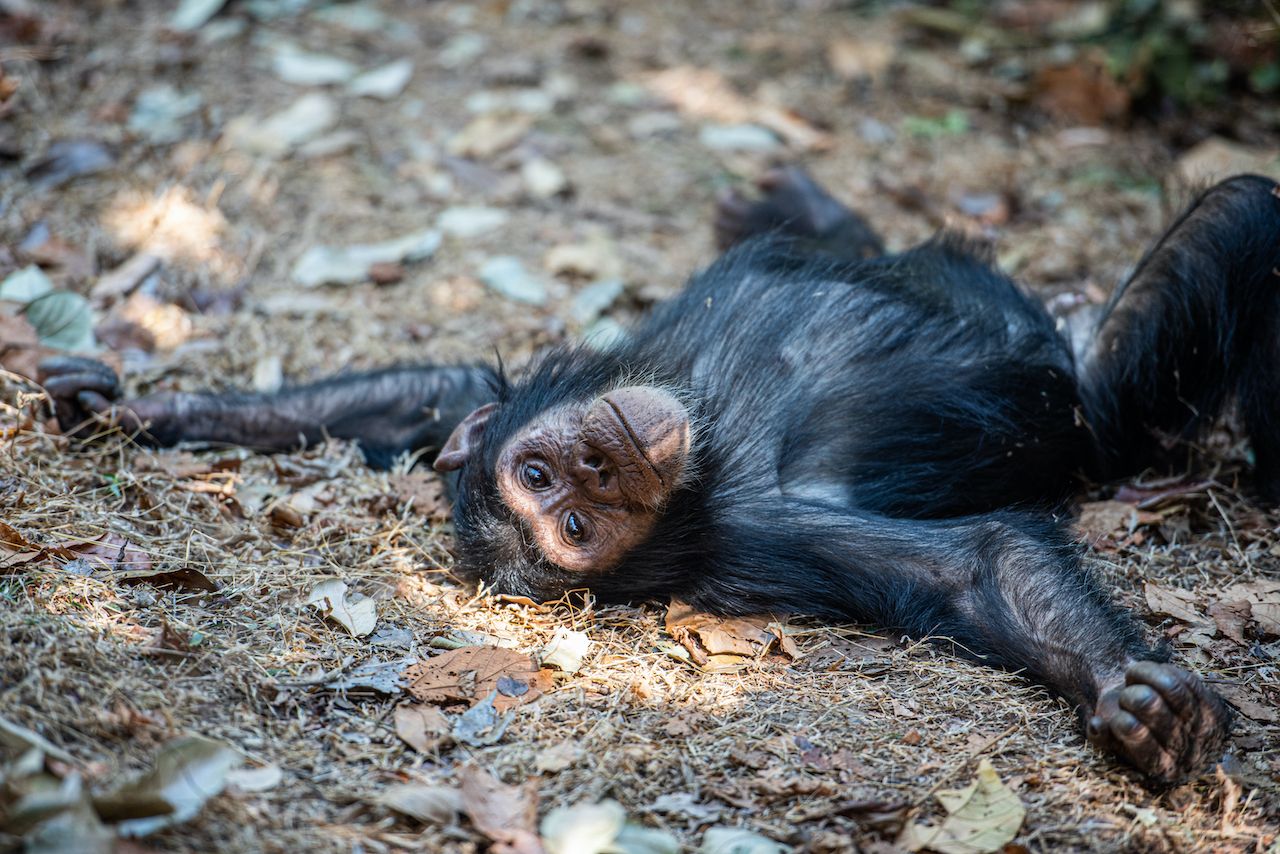 Goodall spent many years living among Gombe’s Kasakela chimpanzee community. Gradually, from her early days at The Peak, she learned to interact with them up close, starting with David Greybeard. Goodall went on to study and establish relationships with other members of the Kasakela chimpanzee community, among them alpha male Goliath and alpha female Flo. She traced lineages within the community through female chimpanzees, giving their offspring names beginning with the same letter as the name she gave them. In the end, Goodall’s research identified F, G, P, S, and T families.

Today’s visitors may encounter members of the G family on a chimpanzee safari in the Kakombe Valley. Though the F family once helmed the chimpanzee community’s hierarchy, the G family now represents roughly one-fifth of the remaining community, with a chimpanzee named Gremlin, born in 1970, serving as the alpha female. Each of Gremlin’s daughters, Gaia and twins Glitter and Golden, have welcomed children of their own in the past decade.

Several tour operators organize chimpanzee treks for visitors to the park. Some are even offered as Airbnb experiences. Expect to pay around $1,000 for a three-day excursion if you book with a company, more if you’re interested in a private tour. At minimum, park entry fees are $100 per person per day, roughly $20 per group for a trekking guide, and another $20 per night for basic lodging. The park is neither easy to access nor easy on the wallet, but if any trip is worth a splurge, it’s one that lets you retrace Jane Goodall’s footsteps.

Get a look at Goodall’s house.

When Goodall first arrived at the park in 1960, she brought her mother, Vanne, and the two shared a tent at a campsite in the forest. As her investment in the park and its chimpanzees increased, she set up a more permanent home right on the edge of Lake Tanganyika, which she still visits to this day. Goodall’s house is located just north of the Gombe Stream Research Center, which is also a stone’s throw from a rest house and a hybrid reception center and casual restaurant. Hike inland from her house and you’ll hit Jane’s Peak.

Travelers to the park can channel either of Goodall’s lodging experiences. The most affordable option is to go rustic at one of the park’s government-owned, self-catering rest houses. Alternatively, visitors can choose between a handful of cushier, and accordingly priced, safari lodges. A popular choice is the Mbali Mbali lodge, which sits right on the lake at the northern end of the park. It has seven private glamping units in total, as well as a host of activities on offer for when you’re not off mingling with the wildlife.

Get familiar with the Rift Valley and Gombe waterfalls. 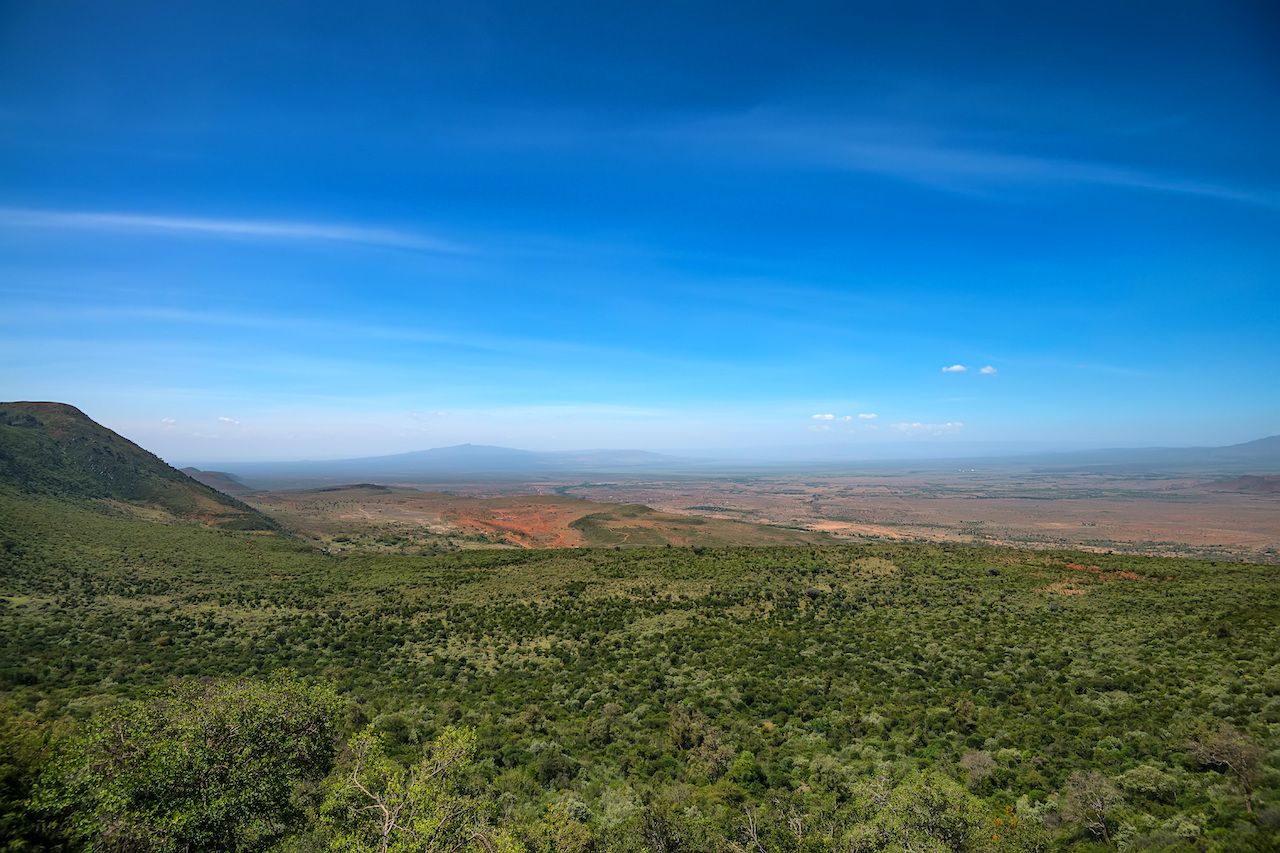 Anyone, even Goodall, would be remiss to visit Gombe Stream National Park without taking the time to appreciate its scenery. While much of the park’s activity centers around Lake Tanganyika, excursions deeper into the forest reveal a network of impressive hikes and waterfalls.

The Kakombe waterfall fits nicely into a Goodall-inspired itinerary. It’s located hiking distance away from Jane’s Peak to the southwest, sticking to the center of the park where the Gombe Stream Research Center and Goodall’s house are also located. Eventually, the Kakombe waterfall leads to the Mkenke Valley where there’s another waterfall worth visiting. At either, visitors have a chance of seeing not only chimpanzees but also other wildlife like colobuses and red-tailed and blue monkeys, as well as some 200 native bird species.

Dedicated birders will have the most success venturing to the Rift Valley escarpment, whose crest forms the park’s eastern boundary. Here, everything from the African fish eagle and Livingston’s turaco to the Kenya rufous sparrow and palm-nut vulture zip around the trees. While the park’s protected forest remains an important habitat for the local wildlife, outside of its bounds, the region has been plagued by deforestation that Goodall has dedicated much of her later years to combating alongside local and international conservationists.

Get involved in the communities around Gombe.

To retrace Goodall’s steps is to not only follow the path she carved but also follow her example. Since the late 1980s, upon witnessing human encroachment threatening Gombe’s chimpanzees and the park itself, Goodall has dedicated the majority of her time to conservation efforts. Beyond collaborating with the Tanzanian and other governments, she travels to villages and schools to educate students on environmentalism and the threat of extinction.

To date, the Jane Goodall Institute has led programs in 130 communities, provided 309 scholarships to young women, and covered 3.4 million acres under conservation action plans. Its Roots & Shoots youth program, which aims to encourage and empower young environmentalists, has launched nearly 6,000 programs around the world. If you’re inspired to be like Goodall, consider supporting her institute’s mission by donating, becoming a chimpanzee guardian, fundraising, or helping lead the cause as part of Jane’s Peak Society.

CultureChannel Your Inner Pioneer With This Lewis and Clark-Inspired Road Trip
Tagged
Parks + Wilderness Travel Wildlife
What did you think of this story?
Meh
Good
Awesome