If you love fresh seafood, you probably already know that New England is a must-visit destination thanks to mouthwatering lobster rolls, fried clam strips, shucked oysters, and other delicacies. But of the six states in the region — Maine, Vermont, New Hampshire, Massachusetts, Connecticut, and Rhode Island — the latter often gets overlooked when it comes to seafood offerings.

Don’t let that deter you from embarking on a seafood crawl through Rhode Island, which is appropriately nicknamed the Ocean State. In fact, our nation’s smallest state is home to some of the best (and freshest!) seafood, including clams, lobster, shrimp, clams, and more.

In Rome, you do as the Romans do; likewise, in Rhode Island, you follow the locals to track down the best seafood dishes in town. From farm-raised oysters and deep-fried clam balls to calamari (the state’s official appetizer), there’s a seafood dish out there that’s sure to appease even the pickiest of eaters.

Here, seafood is more than just a meal. For many residents, it’s quite literally a way of life and a way to make a living. Locally sourced, sustainable seafood and fishing have been a vital part of the economy for decades.

The best way to support the Rhode Island economy? Indulge in decadent seafood. According to Rhode Island’s Department of Environmental Management, the fishing industry brings in millions of dollars per year for the state and its residents, which leads to over $200 million in annual sales. The DEM explains that Rhode Island is also home to over 100 species of fish. Intrigued yet? These are the best seafood staples in Rhode Island, plus where to try them. 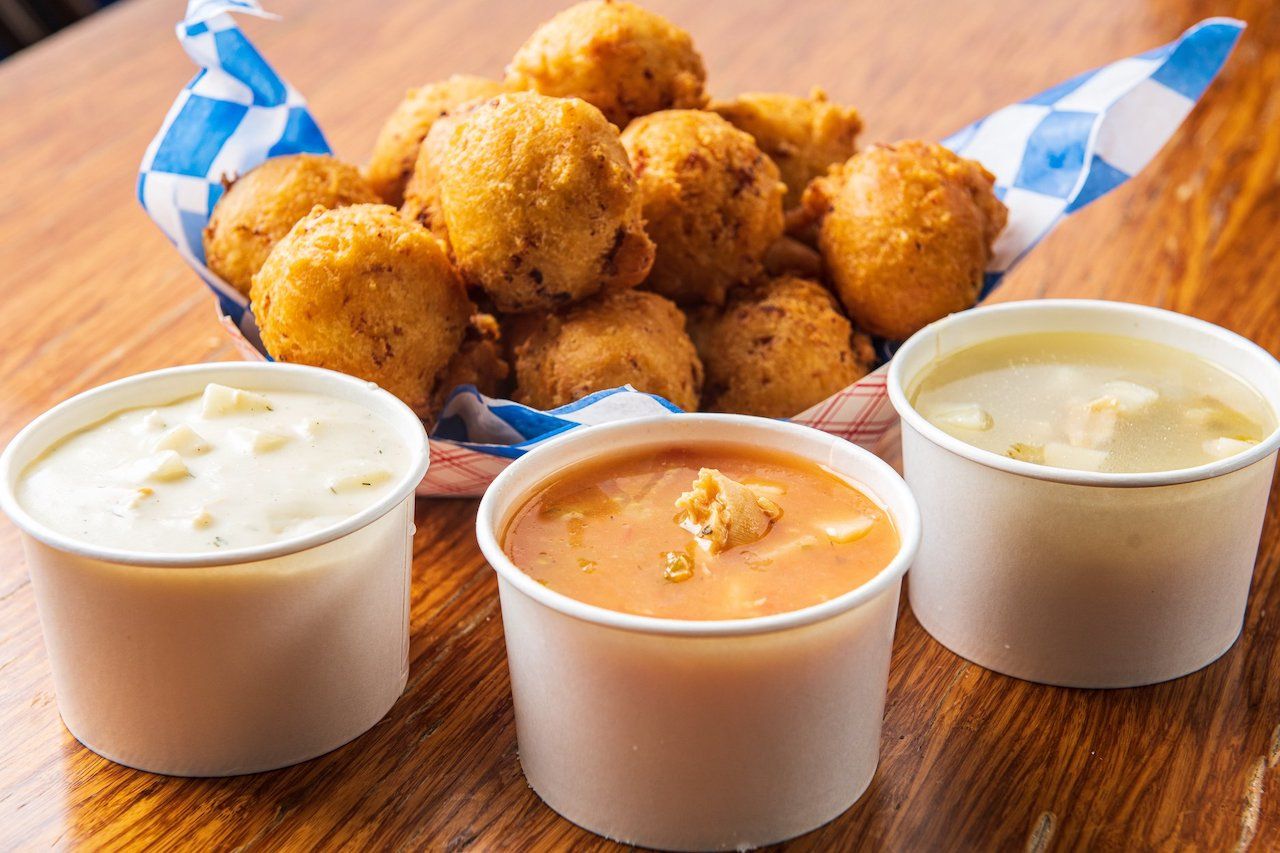 Whether you prefer them fried, grilled, or stuffed, there’s no wrong way to enjoy clams — and with over 200 varieties of clams, you have plenty of options. Ultimately, the best clam dishes are briny and, most importantly, fresh. At Iggy’s Doughboys & Chowder House, diners can choose from an array of indulgent options served casual-style in styrofoam containers. The no-frills mom-and-pop establishment is most famous for its clam cakes. The deep-fried clam balls are a Rhode Island specialty. If you enjoy fried, greasy seafood goodness of any kind, Iggy’s is the spot for you. 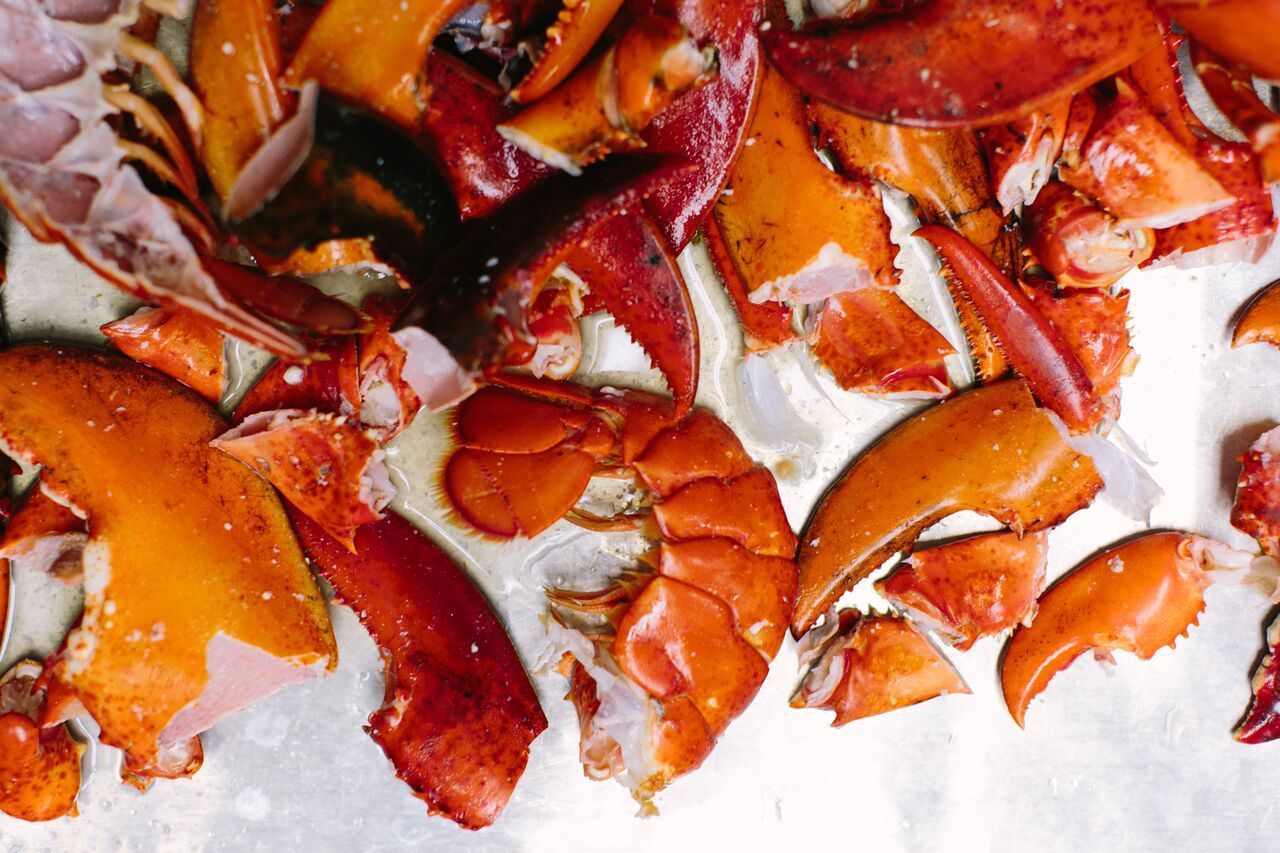 Rhode Island may not be as renowned for its lobster as Maine, but you’ll find that the Ocean State offers its fair share of mouthwatering lobster dishes. There’s creamy lobster bisque, gooey lobster mac and cheese, seafood-stuffed lobster, plain ol’ boiled lobster — best enjoyed with warm butter and fries, of course. For a more upscale dining experience, Hemenway’s in Providence offers some of the best, freshest lobster in the area served in a number of ways, including mac and cheese baked inside a lobster shell. Remember: Sharing is always optional. 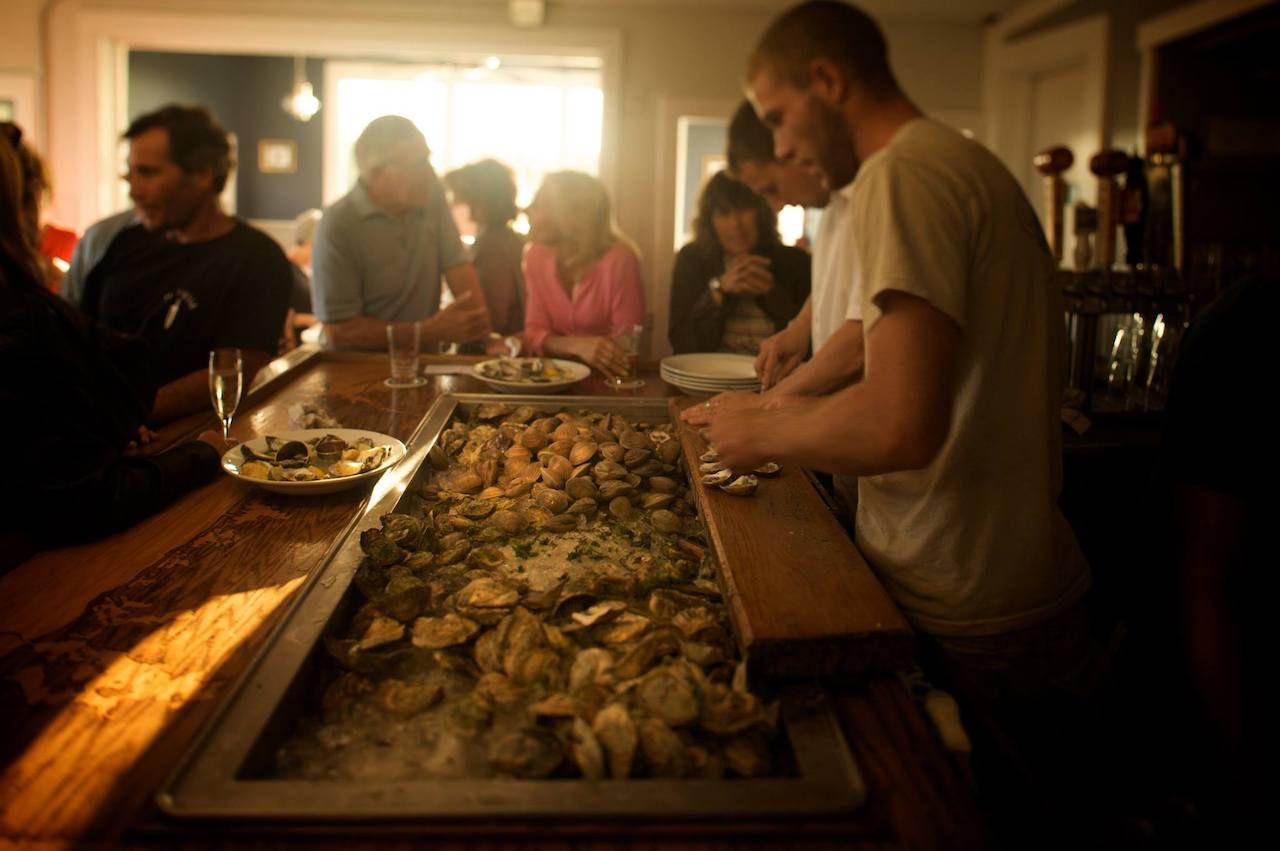 Oysters are an indulgent summertime staple up and down the East Coast, and it should come as no surprise that Rhode Island is home to some of the best in town. The state is home to more than two dozen species of oysters, and the state also has some of the best regions for oysters in the country. For a pond-to-table — or boat-to-table — experience, dine at a restaurant that offers its own farm-raised, freshly shucked oysters. Matunuck Oyster Bar attracts locals and travelers alike and offers about a dozen different types of oysters, all of which are grown and harvested onsite. Some of the dining tables overlook the oyster farm right outside the window, giving guests an intimate look at their dinner — and a beautiful view of the water. 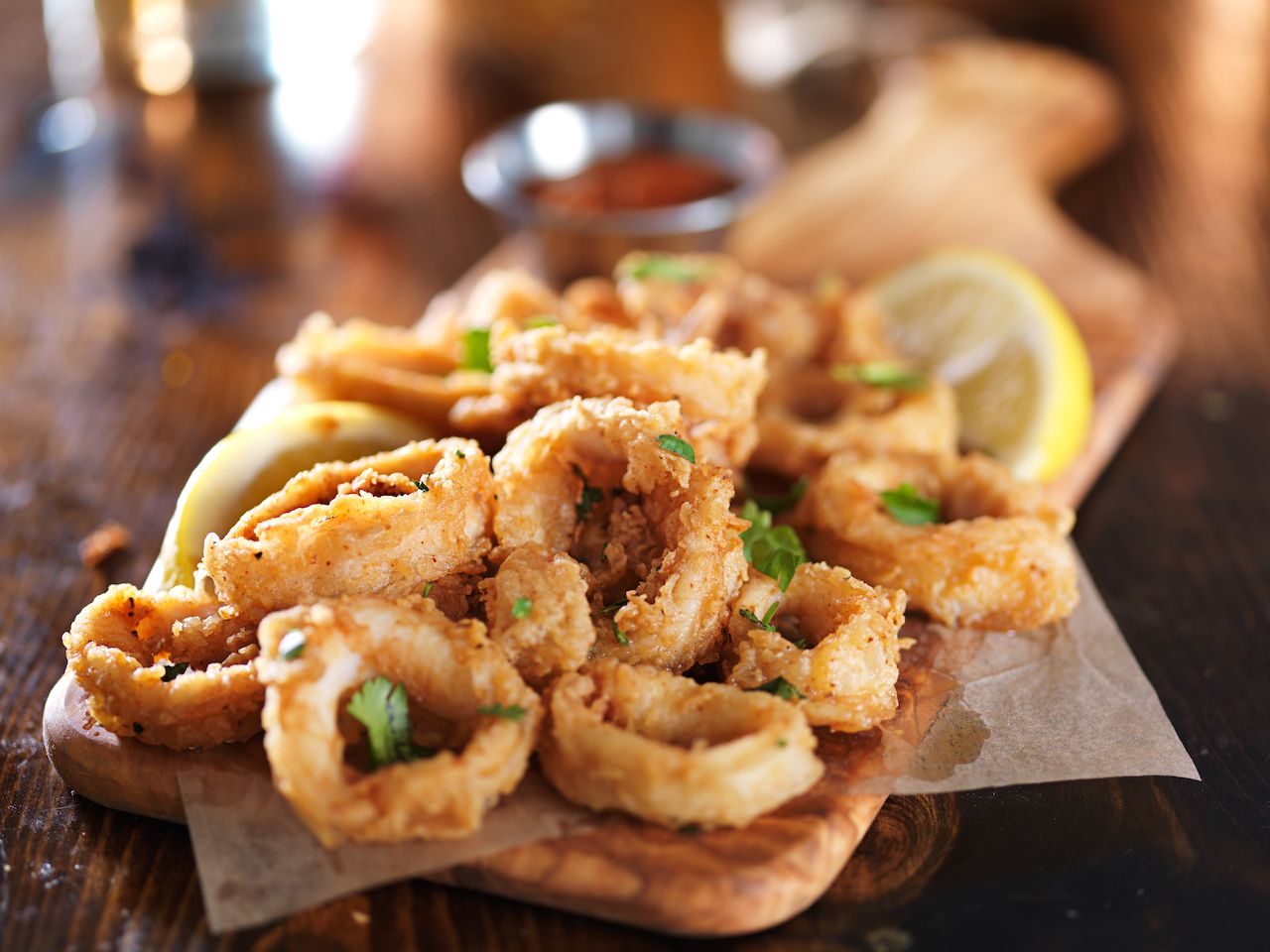 Calamari has been Rhode Island’s official state appetizer since 2014, so you can rest assured there’s no better place to enjoy the popular starter. Calamari is best enjoyed fried (as long as it’s not too oily) and dunked in piping hot marinara sauce. While there are dozens of restaurants across Rhode Island that claim to serve up the best calamari, Simpatico is home to one of the tastiest. Here, the calamari is lightly breaded yet still crispy, so it’s crunchy on the outside and chewy on the inside — exactly the way it should be. The restaurant’s antipasto version is served along with hot peppers, olives, onions, spinach, bell peppers, salami, and capicola. 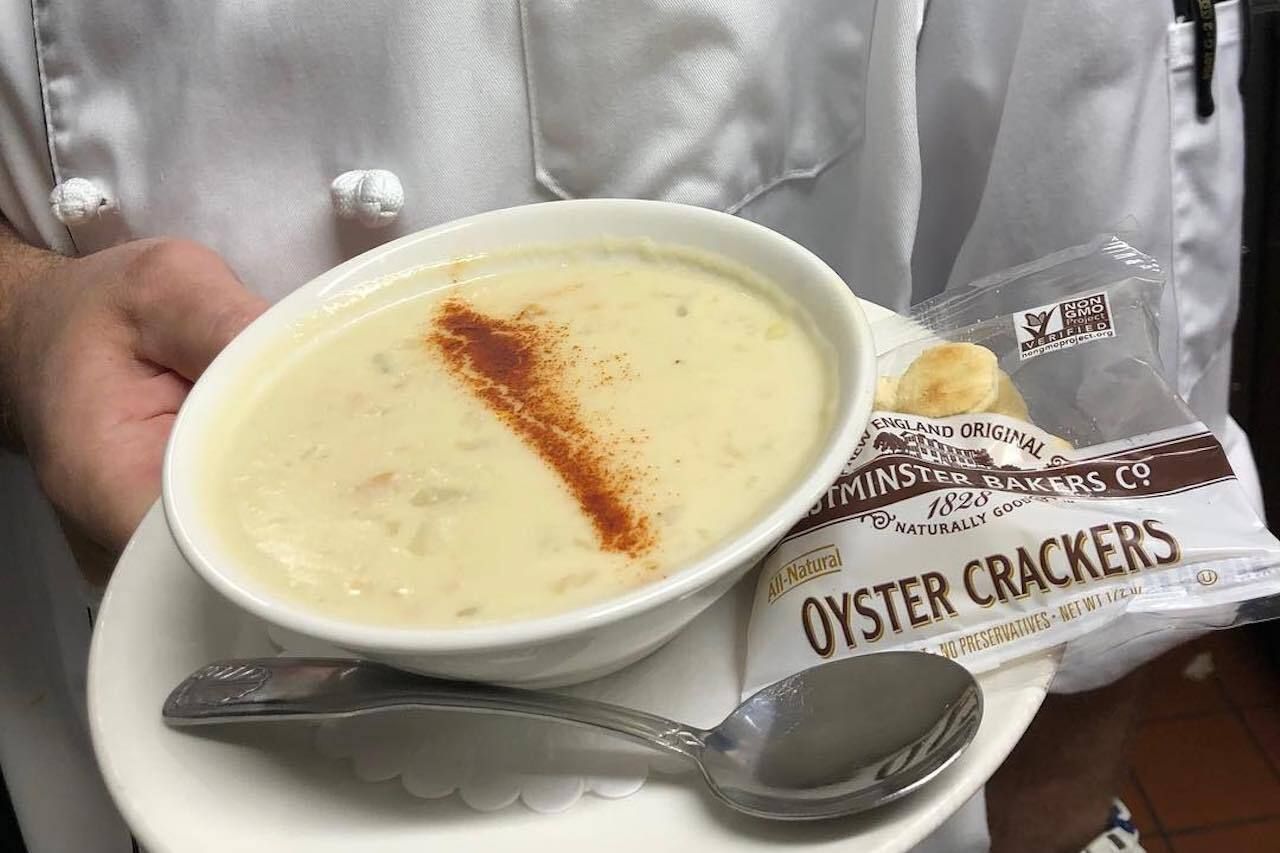 Chowder — or chowda, depending on where you’re from — is associated with restaurants all over New England, and there are four distinct types of chowder. New England-style chowder typically includes clams, potatoes, onions, and, of course, lots of cream and butter. In Rhode Island, several renowned restaurants have taken the staple that is New England chowder to the next level by offering innovative twists on the classic soup. The best versions, however, are all creamy, hearty, and comforting. At The Mooring, diners can savor the signature, award-winning chowder that combines fresh scallops and sweet corn. The unlikely combination of flavors is a delightful mix of textures and briny, saltwater flavors. The dining room overlooks Sayers Wharf, offering pristine views of the water in sunny weather. 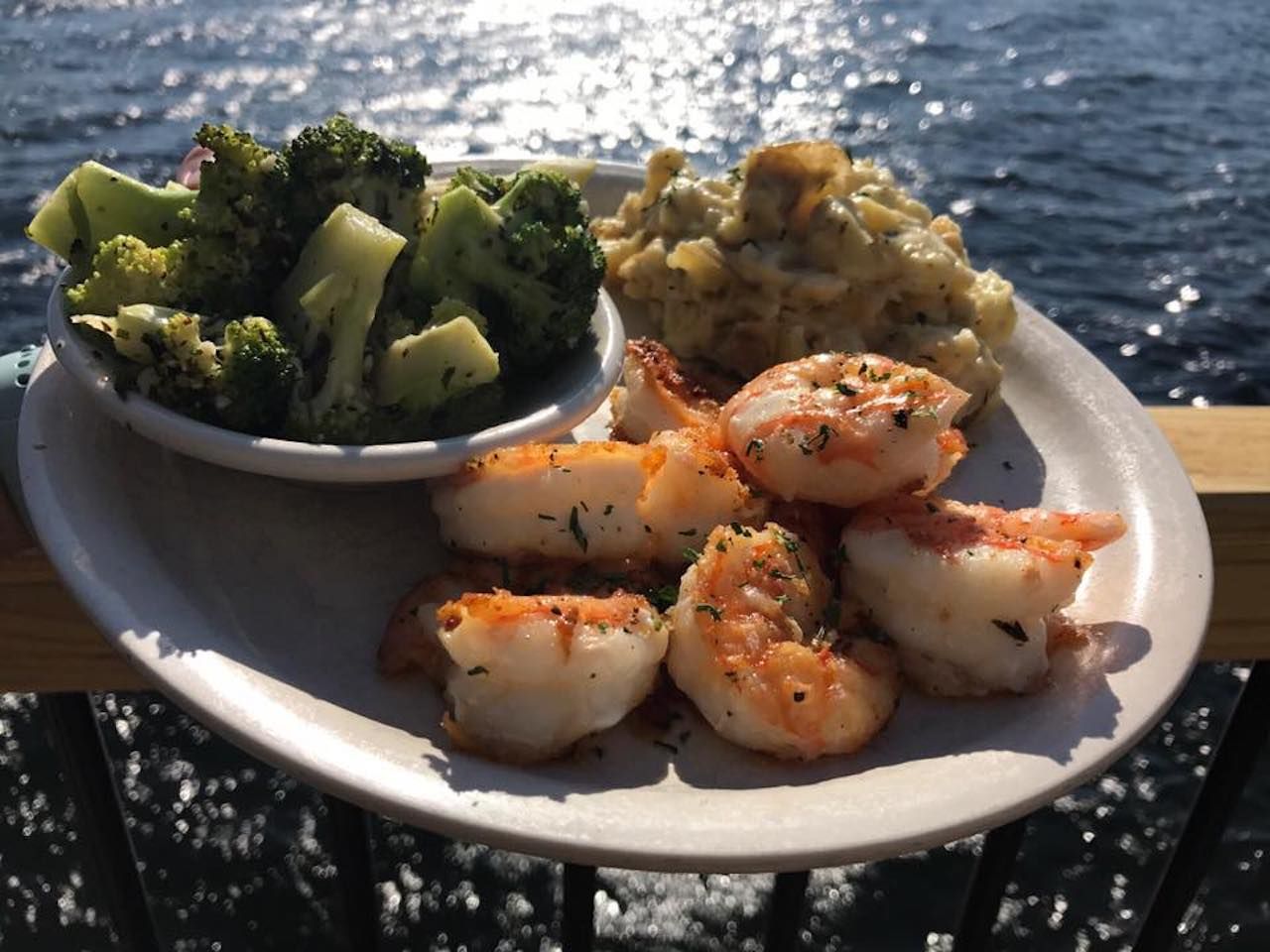 Shrimp is a menu staple throughout Rhode Island, and you’re likely to find it featured at many restaurants. But to try the best shrimp in the state you need to know what to look for. The best shrimp dishes are juicy, tender, and oh-so-subtly sweet. When prepared right, the standard shellfish transforms into an anything-but-basic dish that can easily be dressed up with spices and herbs. Plus, they’re just as delicious fried as they are grilled, broiled, or seared — there’s no need to mask the flavor by dousing shrimp in breadcrumbs and vegetable oil (but there’s nothing wrong with fried shrimp, either). At Quito’s, you can dine on locally sourced shrimp that hit all the right culinary notes.

Why You Need To Visit Providence in Winter

Rhode Island Is Home To the Best Calamari in America. Here’s Where To Try It.

A Tiny Tour of Rhode Island: 12 Perfect Hours in the Nation's Smallest State

In Rhode Island, Summer Vacation Isn’t Complete Without a Visit To a Clam Shack