Diners indulging in seafood across the country might opt for buttery lobster or delicate, briny oysters. In Rhode Island, a bastion of seafood in New England, the marine creature of choice is the humble clam. It’s not just a delicacy featured prominently on restaurant menus. Oh no, the clam is what one writer for the New England Historical Society called “sacred” in the nation’s “smallest and wateriest state.”

For the Narragansett tribe of New England, all parts of the quahog clam were considered sacred — quahog clam shells were fashioned into wampum, ceremonial jewelry used to tell stories among tribes and to honor leaders within Narragansett communities. Quahog clam meat was often featured in soups and stews, while the crushed shells provided nutrients to gardens.

Today, the best known and most popular clam in Rhode Island is still the quahog. (You might already be familiar with the name even if you’ve never set foot in Rhode Island — Quahog is the fictional town in Newport County where Family Guy is set.) Quahog clams didn’t rise to mainstream prominence in the state until around 1938. That year, a massive hurricane decimated Rhode Island’s oyster business. An entrepreneur named F. Nelson Blout (later the founder of the Blount Seafood Corporation and the Steamtown & Northern Railroad) saw an opportunity and began selling the still abundant quahog clam as an oyster alternative.

Rhode Islanders embraced the quahog, and eventually clamming (alongside squid fishing) became one the most prosperous industries in the state. Quahogs became so synonymous with Rhode Island that, in 1987, it became the official “state shell.” Clam digging remains one of the most beloved family traditions in the state, and the activity is easily accessible on Rhode Island beaches.

Every year in late spring, Rhode Island shows off its prized bivalve at Quahog Week, during which restaurants around the state highlight their signature clam dishes. The event makes it easy to try out the many ways that Rhode Island has integrated this seemingly simple ingredient into its cuisine. Outsiders might be surprised to find that the quahog is so versatile.

One reason for the enduring popularity of the quahog might be its signature flavor. Like many oysters from this region, quahog clams are briny and mildly sweet with tender meat. The most desirable variety of quahog is the small but mighty littleneck clam, which is sweeter than other hard shell clams, and delicate in texture.

Quahogs can be fried, breaded, stuffed, and boiled — and that list is just a starting point of the many ways Rhode Islanders transform their precious clams. But there are a few quahog dishes that are considered the most iconic in the state. Here are the best clam dishes you have to try in Rhode Island. 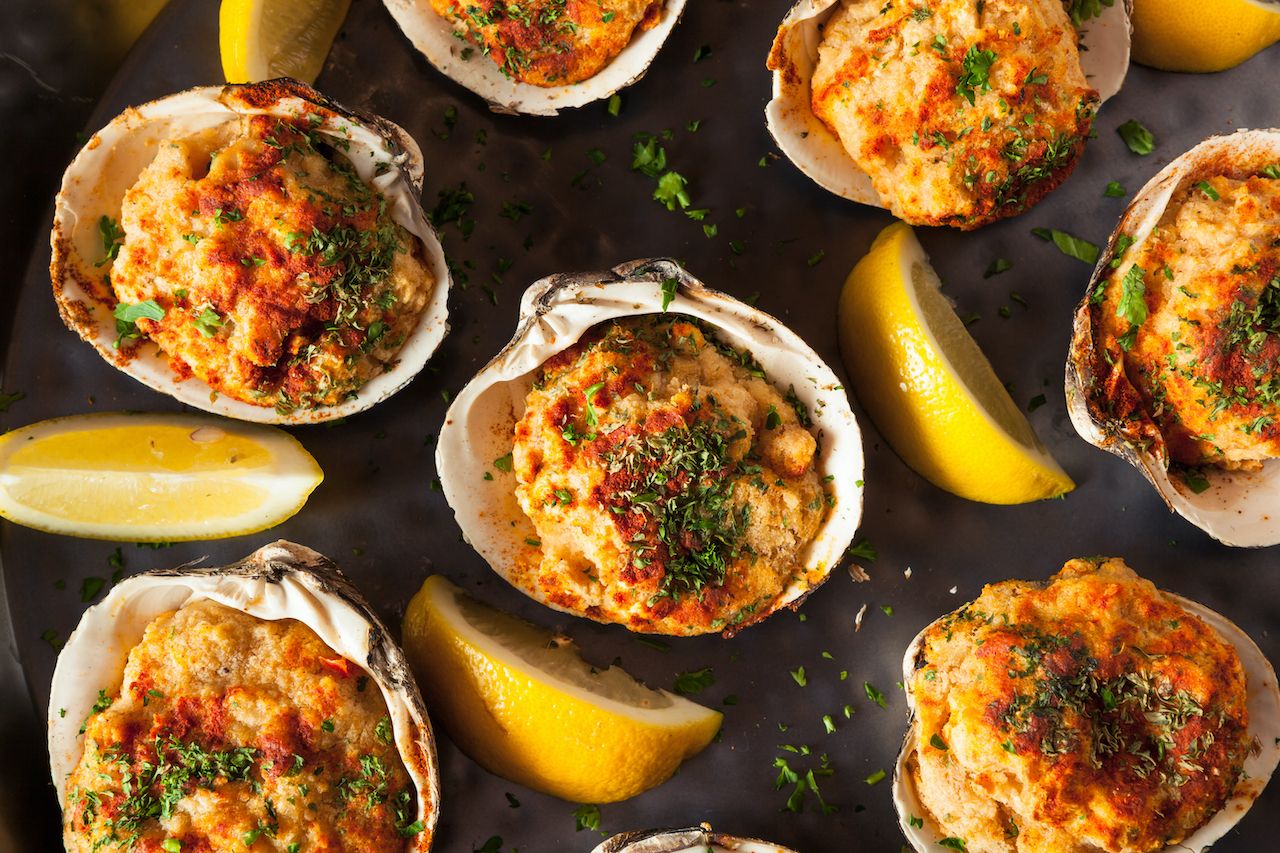 Arguably the most iconic seafood dish to come out of Rhode Island, stuffies (or stuffed quahogs) are a delectable way to enjoy the large, hardshell quahog clam. The chopped clam meat is combined with a mixture of bread crumbs, onion, bell pepper, celery, and herbs, and then baked in a clam shell. Originally a carb heavy treat for the region’s fishermen and farmers, today Rhode Islanders of all stripes have adopted stuffies as their appetizer of choice.

Quahog clams accompany bacon and potatoes in Rhode Island’s distinctive version of clam chowder: The broth is clear, as opposed to the creamy, opaque broth popular in the rest of New England. Rhode Islanders insist that the benefit of clear broth is that it allows the flavor of the clams to shine through. The point, as one Rhode Island food blog put it, is to let “the quahog take center stage.” According to the blog, the result is “intense ocean flavor….Each spoonful blends broth, briny clam essence, sweet onion, tender potato, and crispy pork bits.” 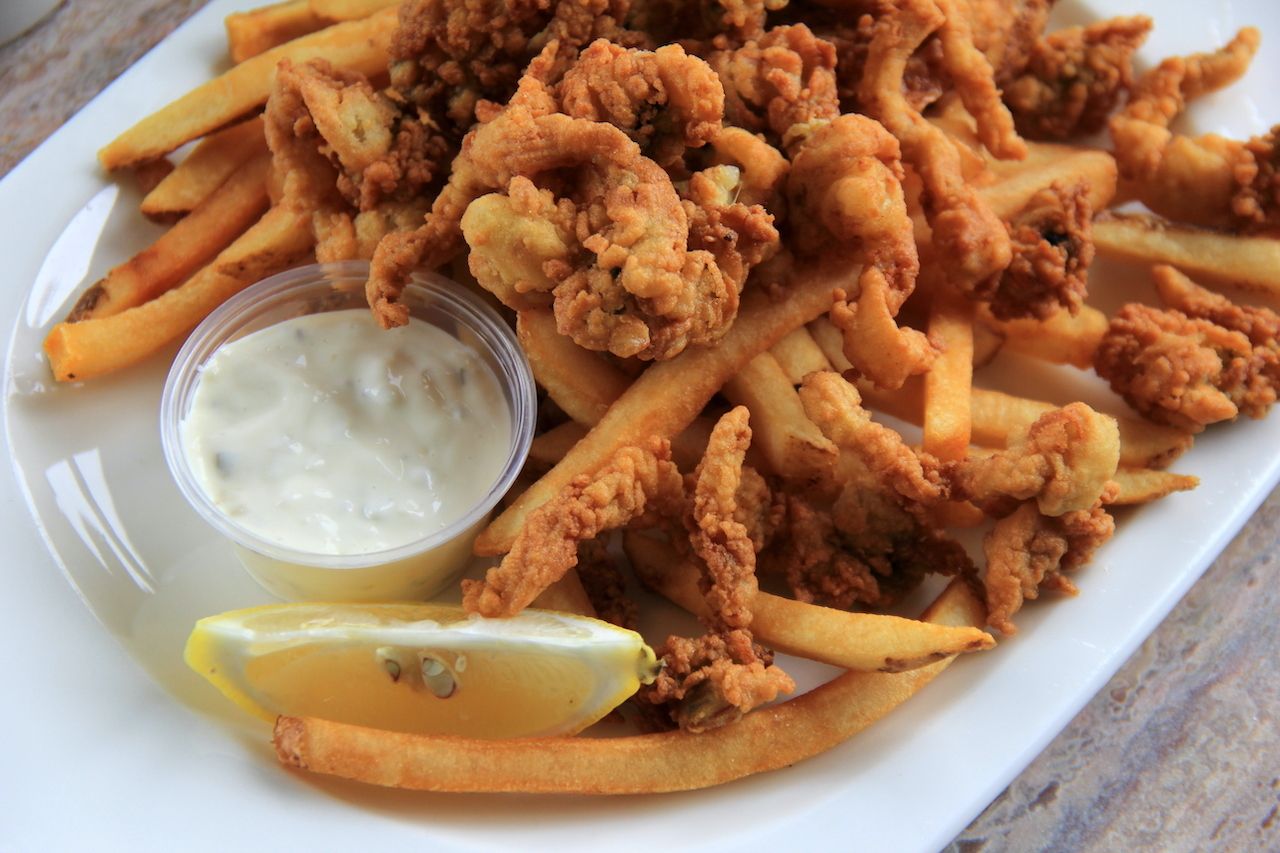 In a 2007 article for The New York Times, David Leite wrote that, “Fried clams are to New England what barbecue is to the South.” Dipped in flour and fried, fried clams are enjoyed at roadside shacks — especially during the summer. The strips of fried clam are crispy and chewy, and made from soft-shell clams rather than the hardshell quahog that’s popular in many other Rhode Island clam dishes.

The clam bake or boil is a widespread tradition throughout New England, but in Rhode Island (and parts of Massachusetts) it takes on a distinctive twist with the addition of Portugese linguiça or chouriço sausage to the mix. Some Rhode Island-based chefs also include lobster in their clam bakes, and red potatoes play an important role, too. Clambakes aren’t all that common on restaurant menus, but there are some Rhode Island institutions that hold clambake events that are open to the public every summer. 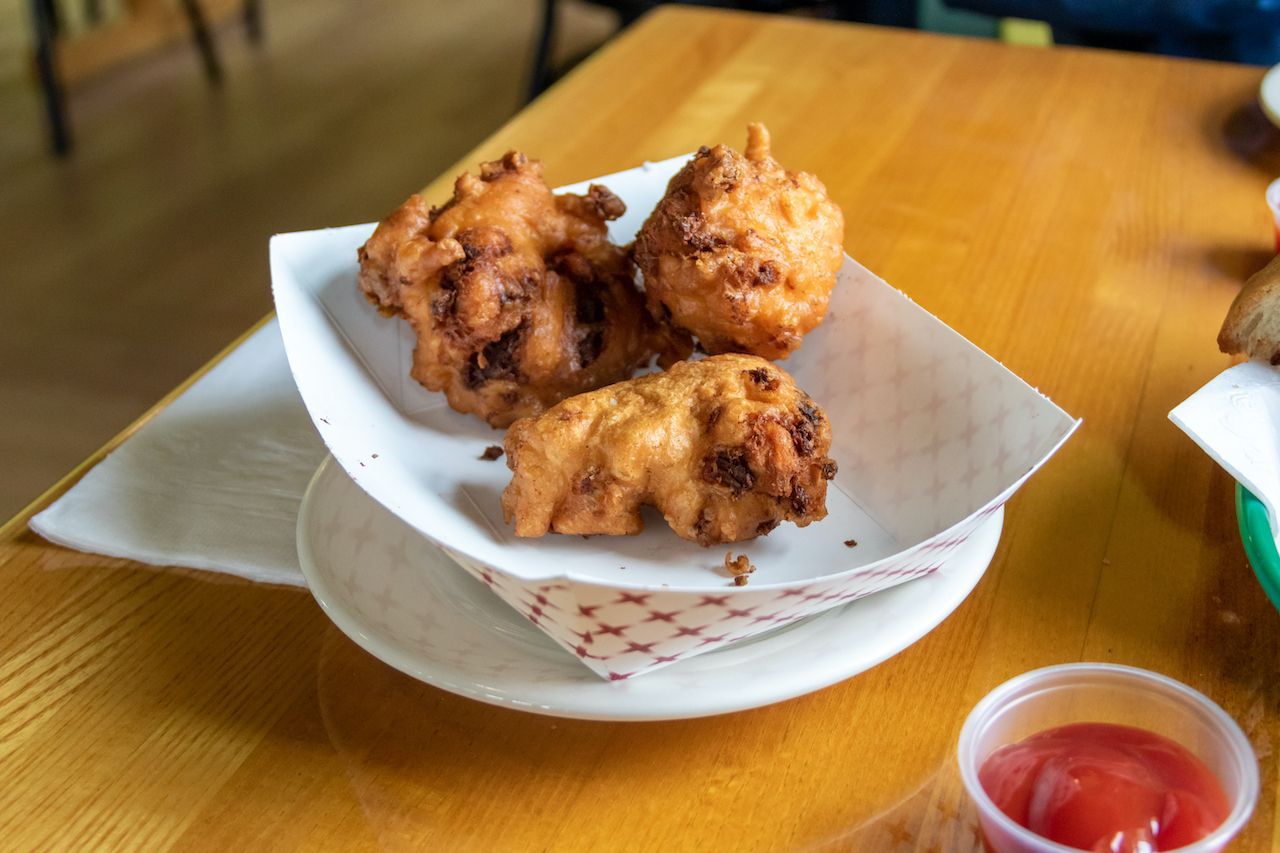 More commonly known as clam cakes, this simple snack is actually a fritter: crispy, golden brown balls of deep-fried clam meat. Yes, the moniker is a little confusing. It bears no relation to a similarly named dish, the crab cake. For one thing, Rhode Island clam cakes are usually never flat. Hank Shaw, a fisherman and James Beard Award-winning author from Block Island, just south of mainland Rhode Island, wrote that clam cakes are basically “clam beignets.” His description of these tasty morsels might make your mouth water: “The slightest aroma of brine surrounds you,” he wrote. “Tiny chunks of clam nestle themselves in the folds of the pillow, offering surprising bites of chewy meatiness as you down one of these little glories after another.”

10 Things You Grew Up Doing in Rhode Island

Every Type of Clam Chowder, Ranked