Road trips have the unique ability to make you feel like you’ve thoroughly explored a region on a Lewis and Clark-esque journey. In reality, even the most extensive road trips leave many stones unturned, especially in states with seemingly limitless natural beauty. New Mexico would probably take months on the road to fully explore. That’s okay. You don’t have to see every inch of New Mexico on one tank of gas, but the state’s famous national monuments are a good place to start.

In fact, only California and Arizona have more national monuments, and we aren’t even counting New Mexico’s national historic parks. Rather than visit all 11 national monuments, we’ve listed our favorites among them, which will give you a feel for what makes this state’s geography so unique and memorable. Whether it’s a volcanic field up north or a white-sand desert down south, New Mexico’s unusual landscapes are just waiting to be visited. Here’s how to plan the perfect New Mexico road trip through its epic national monuments.

From Albuquerque to rock carvings 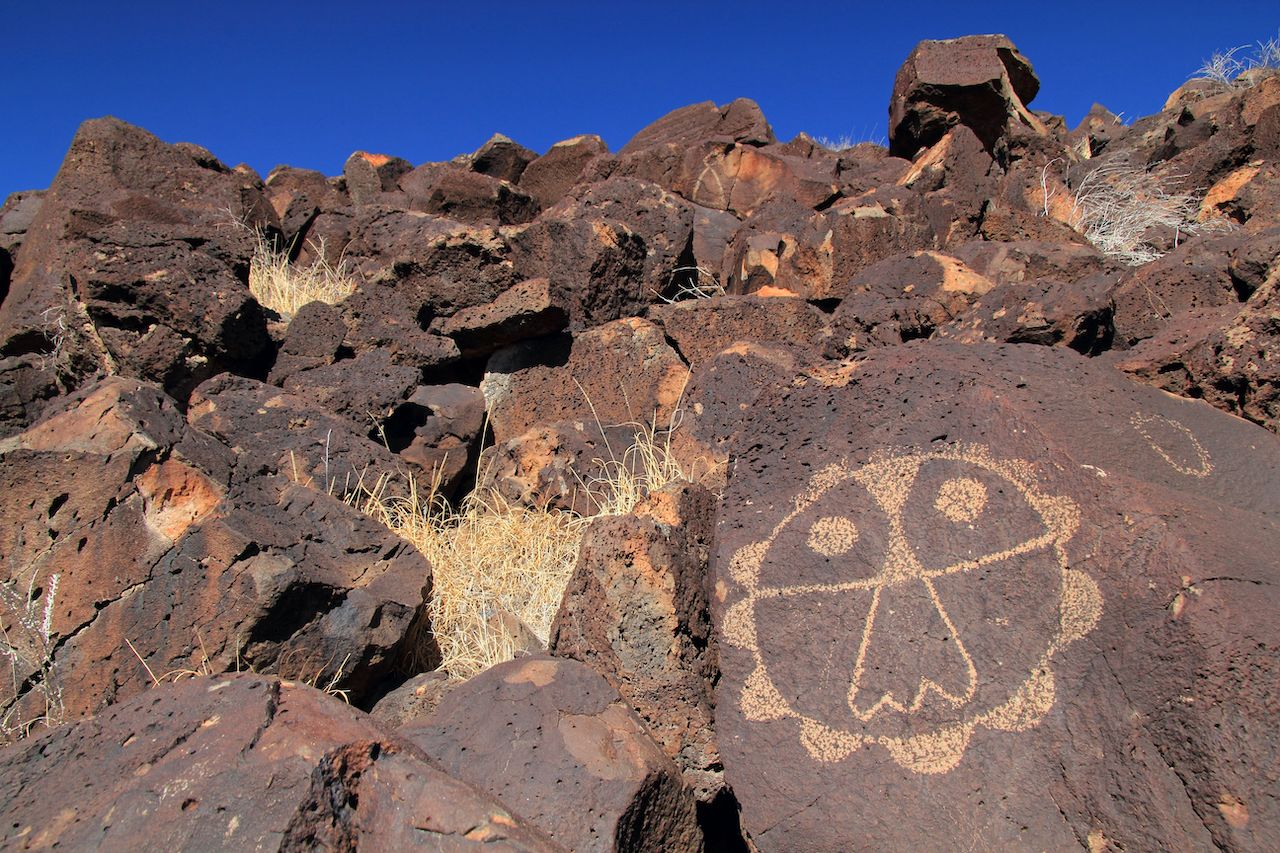 Road trips might be about the journey rather than the destination, but no one wants to wait too long before stopping at their first viewpoint or reaching the first stop on their itinerary. Luckily, when you set out from Albuquerque, you’ll only have to wait about 20 minutes before seeing your first national monument.

Technically located within the city limits of Albuquerque, Petroglyph National Monument stretches 17 miles along Albuquerque’s West Mesa. Petroglyphs are rock carvings, where drawings are made by chiseling on the outer layer of the stone to expose the paler rock underneath. One of the largest petroglyph sites in North America, this area features designs and symbols carved onto volcanic rocks 400 to 700 years ago by Native Americans and Spanish settlers. The symbols give you a window into the life of a centuries-old civilization and serve as a record of cultural expression.

There are also four different hiking trails just a short drive from the information center, ranging in length from one to four miles roundtrip. Three of these trails allow for petroglyph viewing. To see the area more quickly and then continue on your journey, you might prefer mountain biking. Bikes are allowed on the Boca Negra Canyon multi-use path, and on the crusher fine trail. 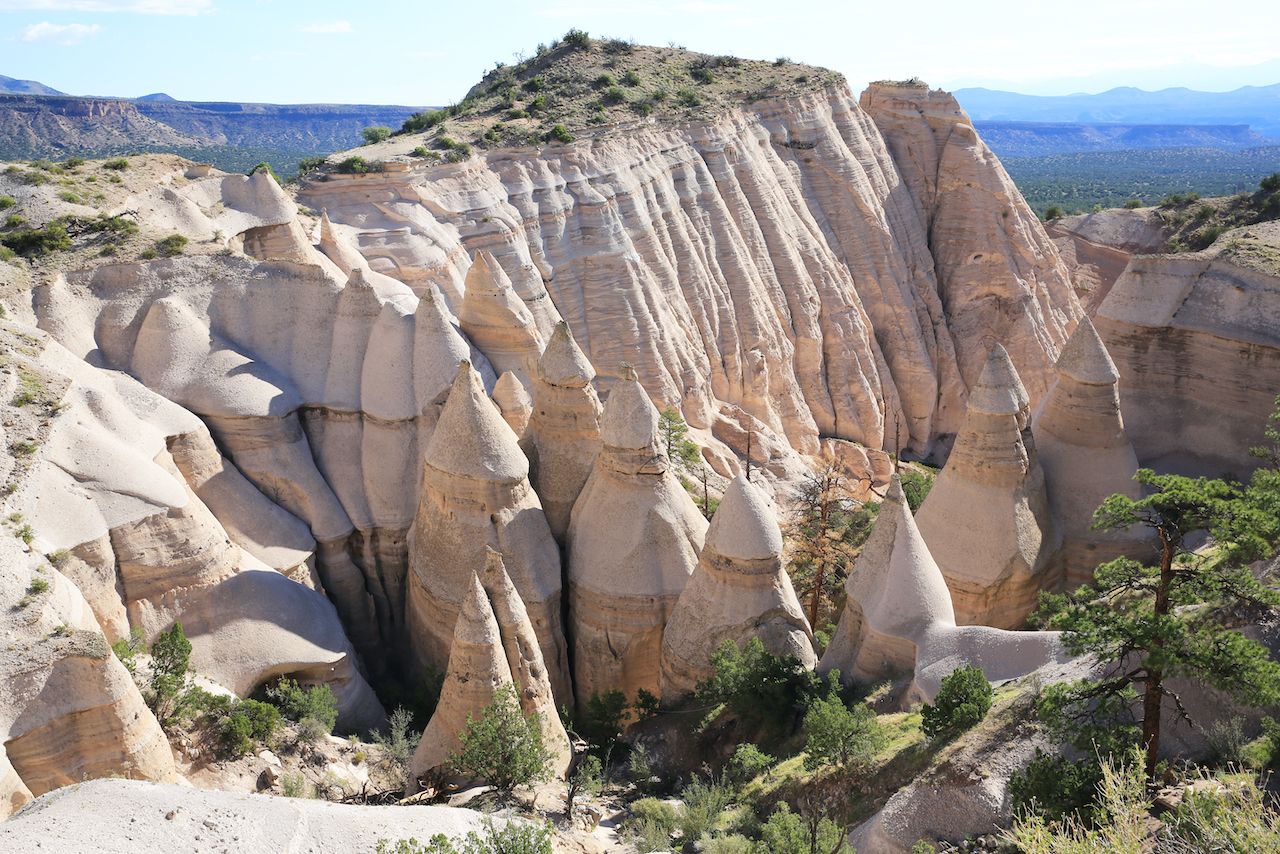 From here, head an hour north on Highway 25 to Kasha-Katuwe Tent Rocks National Monument. Located on the Pajarito Plateau, the monument includes a national recreation trail and is designed for foot travel only. So yes, you’ll have to get out of the car for this one. The most defining features here are the cone-shaped tent rock formations, products of volcanic eruptions from six to seven million years ago. Now, the rocks resemble tents ranging from a few feet to up to 90 feet tall.

In addition to simply marveling at the unique geological formation, the park is great for hiking, birdwatching, and admiring the flora. The Cave Loop Trail is 1.2 miles long while the more difficult Canyon Trail is a one-way trek into a canyon, with a steep climb to the top of the mesa for unparalleled views of the Sangre de Sandia mountains and the Rio Grande Valley. 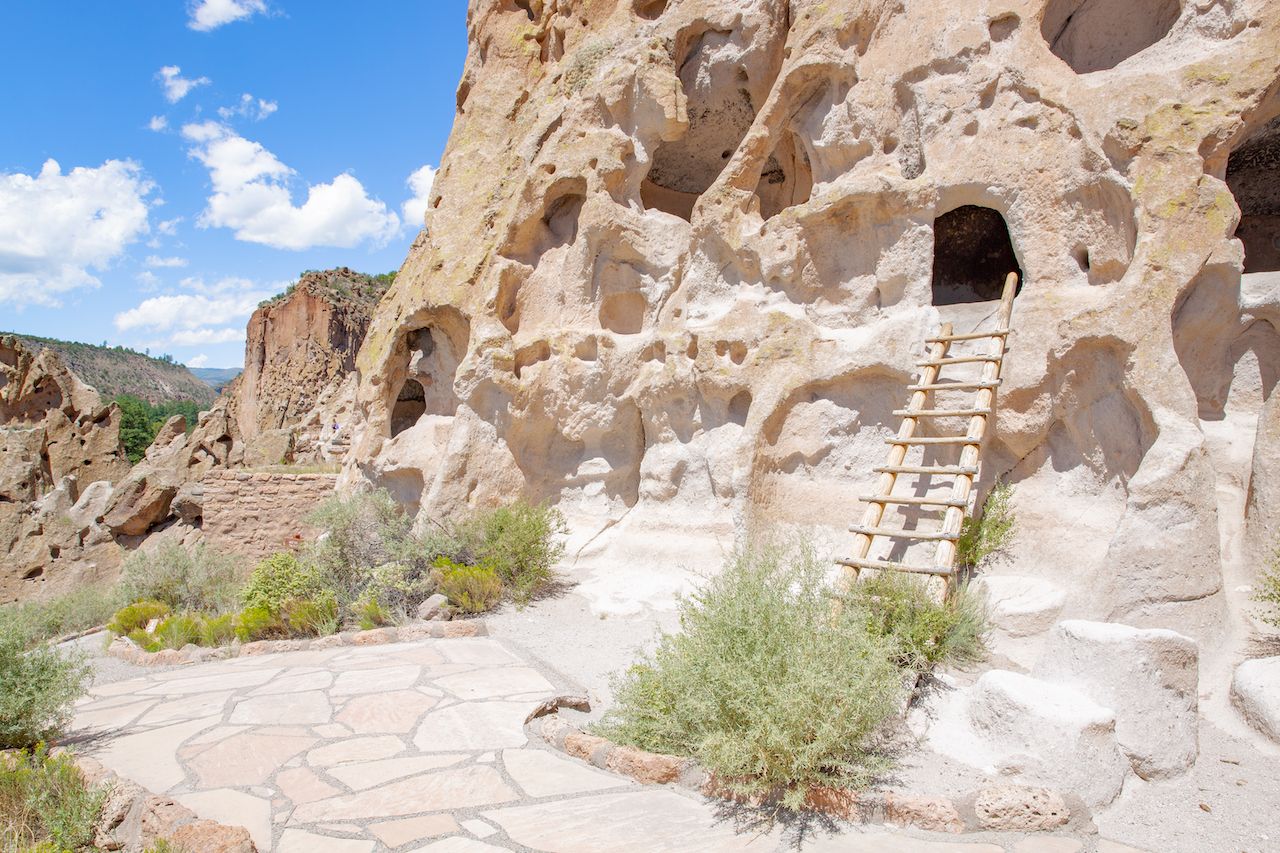 An hour and a half north of the tent rocks, you can continue your geological tour of New Mexico’s history. Take Highway 25 to Route 84 just past Santa Fe, and visit Bandelier National Monument. This monument protects over 33,000 acres of rugged canyon and mesas, as well as some of the oldest ancestral structures in the state. As you might come to expect by now on your New Mexico road trip, you’ll find plenty of petroglyphs here, as well as standing masonry walls and houses carved into the rock cliffs. The entire Bandelier area is also one of our favorite hiking spots in New Mexico. The Cerro Grande trail, for example, is a four-and-a-half-mile loop that takes you 1,200 feet up through conifers to the highest point in the park at over 10,000 feet.

The Tsankawi section of the national monument is perhaps the best known, located on Highway 4 about 12 miles from the main entrance. The best way to see Tsankawi is via a 1.5-mile trail along a mesa, which feels like walking through an archaeological dig site. You’ll see petroglyphs, cavates (cliff dwellings), and the Ancestral Pueblo village of Tsankawi. The Ancestral Pueblo people lived in the area as early as 1150, and marks of their civilization remain.

Lest you think New Mexico is all desert and mesas, right next to Bandelier you’ll find the Santa Fe National Forest, covering over 1.5 million acres, which is perfect for a change of scenery. With peaks topping 13,000 feet, the forest ecosystem supports a diversity of trees, from fir and pinyons varieties to junipers, pines, and oaks, while aspens and grasses populate its meadows.

North to adobe relics of the Santa Fe Trail 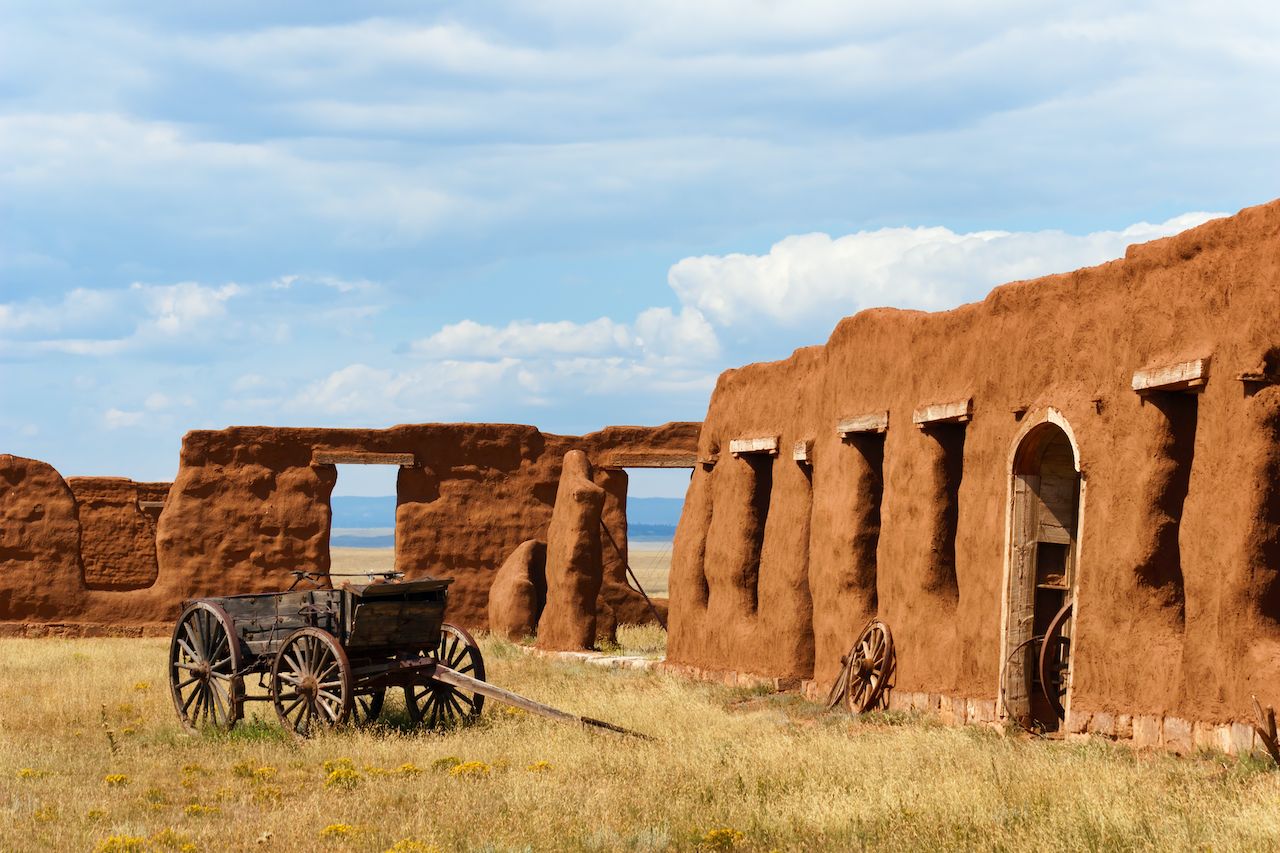 After visiting Bandelier, you can overnight in Santa Fe, a fantastic destination in winter and, really, any time of year. After a good rest, it’s time to really start heading north. Continue northeast on Highway 25 to Fort Union National Monument. Here lies the adobe remains of the region’s largest 19th-century military fort, constructed to oversee the Santa Fe Trail. Built in 1851, Fort Union was the main guardian of the Santa Fe Trail, one of the most important trade routes in North America.

You can take a self-guided interpretive walk around the site, just over a mile long, to learn all about the historical significance of the forts and the Santa Fe Trail. The site is also considered an International Dark Sky Park, making it an ideal place for stargazing. Now get ready to jump from pioneer past to a landscape that looks almost prehistoric. 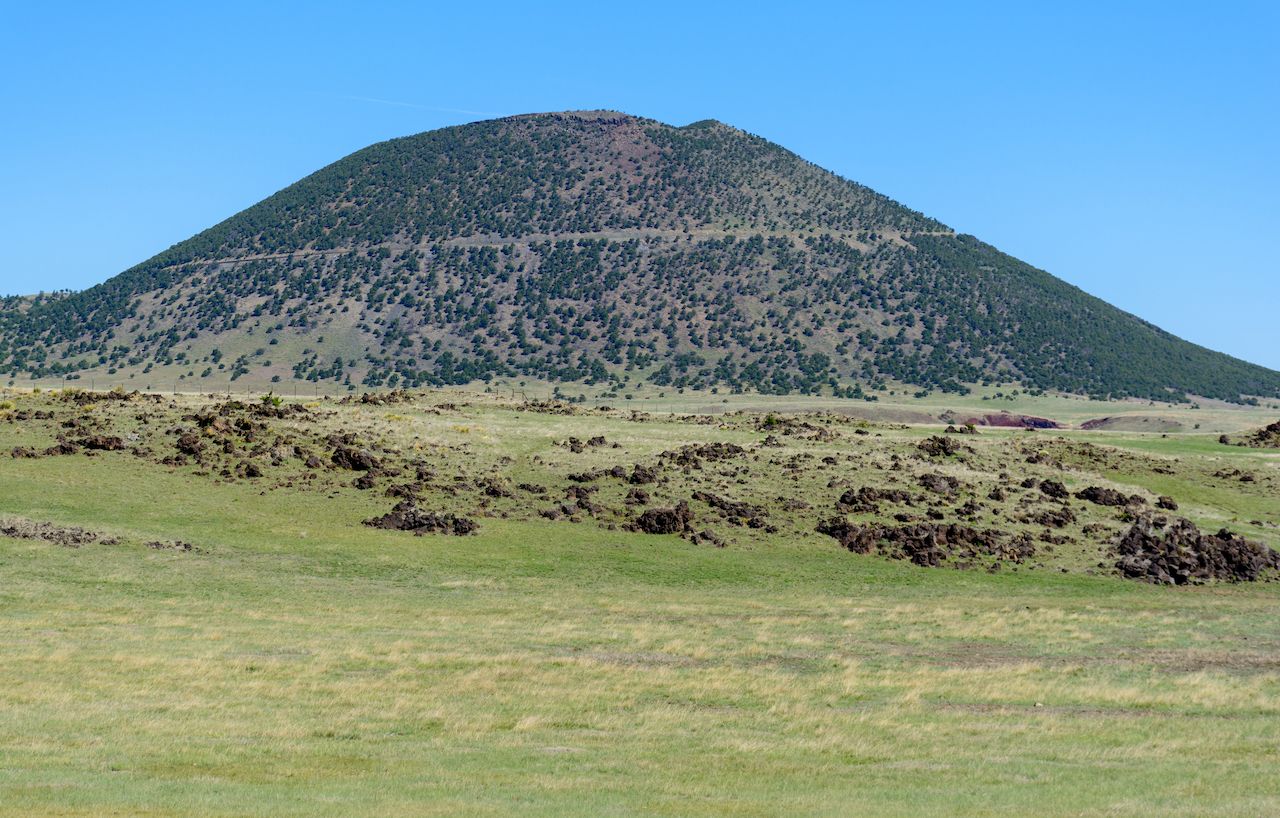 The volcano dates back over a million years and has been playing a significant role in the area’s natural and human evolution ever since. The volcano’s eruptions began 56,000 to 62,000 years ago, covering over 15 miles with lava fields and transforming the New Mexico landscape. Don’t worry, though — that was the volcano’s only eruptive period, and now it’s considered extinct. That’s why it’s perfectly safe to hike the Crater Rim Trail, a one-mile look around the rim of the volcano with stunning views of the surrounding landscape. There’s also the Crater Vent Trail, Lava Flow Trail, and Boca Trail (varying in difficulty) for more ways to explore the volcano.

If you’re lucky, you might also see some animals for which the Capulin area is famous. There are 73 species of birds, as well as mule deer, white elk, black bears, coyotes, and mountain lions roaming the park. Needless to say, if you do encounter a mountain lion, don’t try to get an up-close photo.

Note: If you don’t have time to head all the way to Capulin Volcano, you could explore another national monument an hour west of Albuquerque at the end of your New Mexico road trip instead. El Malpais National Monument is another rough lava landscape so scarred by its volcanic history that “malpaís” in fact means “badland.” While Malpais is certainly worth a visit, if you have the time, we recommend Capulin instead, since its massive volcano is not a sight you’ll soon forget.

South to the white desert 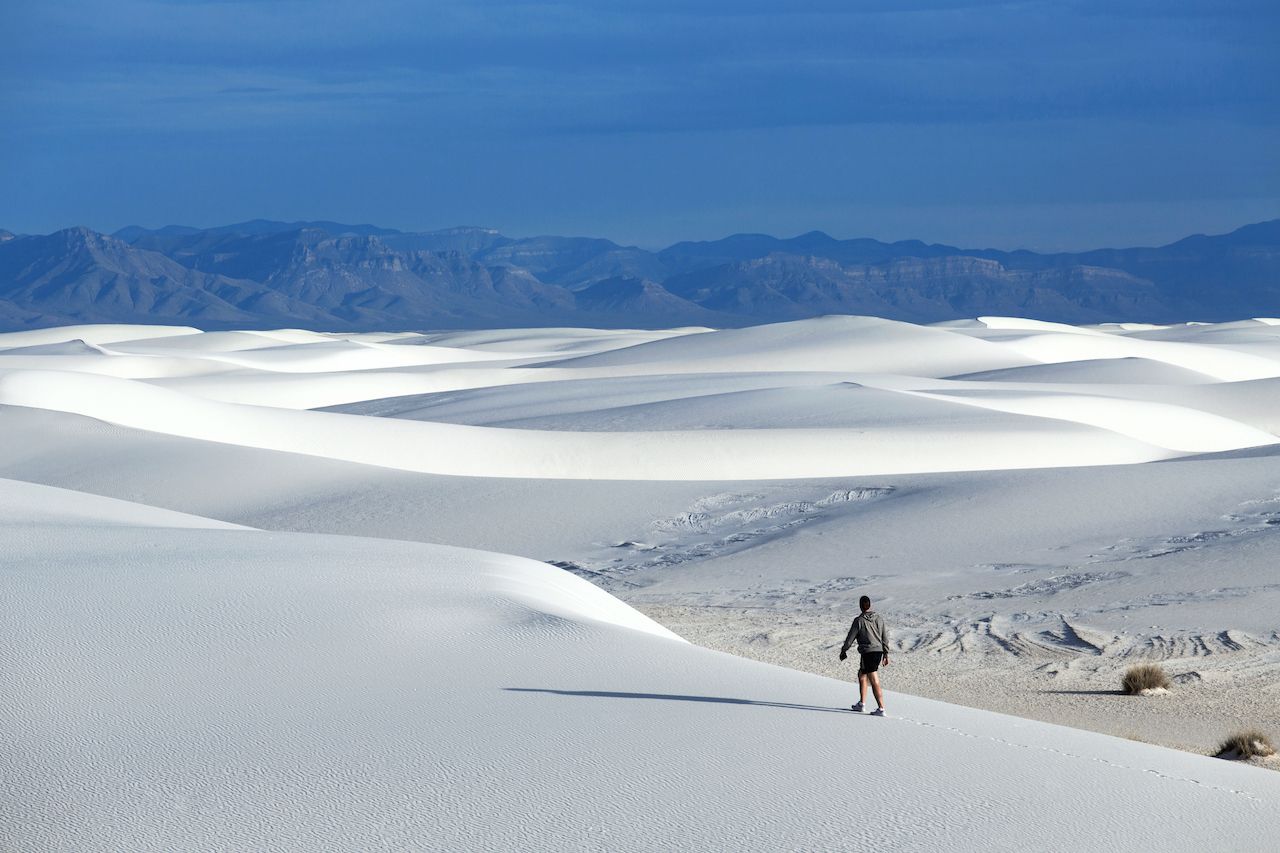 Since you’re basically on the border of Colorado at this point, it’s time to turn around and head south. But we’re not stopping at Albuquerque. We’re passing your starting point by about three-and-a-half-hours to White Sands National Park, taking Highway 25 south to Rt. 380 West, then south again on Rt. 54.

At the end of 2019, White Sands was designated a national park — but it was a national monument for 86 years. It’s on the itinerary because you haven’t really seen the New Mexico desert until you’ve seen White Sands, a remarkable place that looks like the Sahara Desert collided with Aruba. That’s because its sand is made of gypsum, a mineral salt left by a long-lost lake tens of millions of years ago.

Located at the southern edge of a 275-square-mile dune field in the Tularosa Basin, the monument is best explored by the eight-mile Dunes Drive from the visitor center into the heart of the rippled gypsum knolls. In addition to driving the alien terrain, you can also get out and cycle, take advantage of picnic areas, or even camp under the stars. Indeed, backcountry camping sites among the dunes are available on a first-come, first-served basis.

There are five hiking trails through the park, ranging from the half-mile Playa Trail focusing on outdoor educational exhibits to the more strenuous Alkali Flat Trail, a five-mile round trip hike taking you to the edge of Lake Otero. Despite its name, the trail is not flat, taking you over steep dunes and into the heart of the spectacular park.

From wispy dunes to craggy peaks 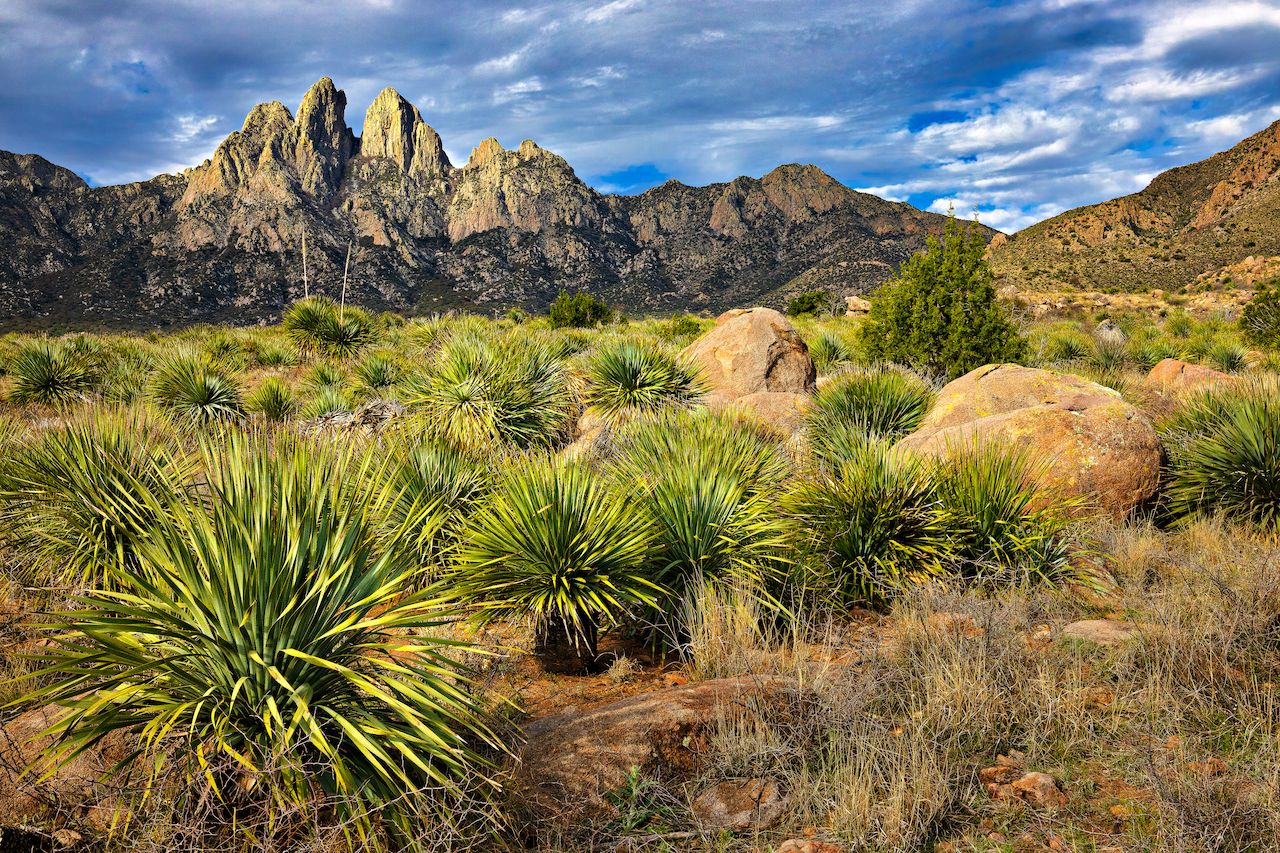 To cap off your New Mexico road trip, venture another hour south to Organ Mountains Desert Peaks National Monument. The theme of this trip has been jumping between incredibly diverse natural and geological environments, and the Organ Mountains are no different. A stark departure from the flat, arid landscape that has defined much of your driving view, this area is home to dramatic ranges with rocky spires, and the park is full of open woodlands with towering ponderosa pines.

The monument includes the Organ Mountains, Doña Ana Mountains, Sierra de las Uvas Mountains Complex, and the Greater Potrillo Mountains. The Organ Mountains are defined by their angular peaks, narrow canyons, and views of the Chihuahuan Desert habitat. It’s popular among horseback riders, mountain bikers, campers, and hikers. The Doña Ana Mountains have an abundance of hiking, horseback riding, and mountain biking trails, as well as rock climbing routes. The more remote Potrillo Mountains are the aesthetic black sheep of the three, comprising a volcanic landscape including lava flows and craters.

Before driving back to Albuquerque, consider spending an evening in Las Cruces and savor the area’s Hatch Valley chilis in one of its tempting Mexican eateries — or even in a sweet frozen custard.

Food + Drink6 Virtual Experiences That Bring the Best of Santa Fe To You
Tagged
National Parks Road Trips New Mexico, United States
What did you think of this story?
Meh
Good
Awesome