“Milkshake IPA” sounds a little like Tabasco sauce ice cream. Maybe you like both parts separately, but together it sounds gross. But, I told myself as I took a hesitant first gulp in the Roc Brewing tap house, “when in Rochester…”

Surprisingly, I liked it. A lot. Much like the city it comes from, the smooth, malty beer was unexpectedly delightful. It has hints of chocolate that cancel out any overt hoppiness, and the kind of creative flavors in beer people go to Asheville, Portland, or Boulder, Colorado, to find. Western New York? Not so much.

But hidden on the Erie Canal between Albany and Buffalo sits the hands-down best beer city in the Northeast. A one-time Kodak industry town that’s combined its spirit of education and creativity with the tradition and history of big business, Rochester has turned itself into a top-tier craft-beer destination.

Rochester, New York, and its 208,000 residents have the most breweries per capita of any city in the Northeast after Portland, Maine. That’s the 21st-most in the country. Monroe County, where Rochester lies, is home to 26 breweries. Extend that out to neighboring Ontario and Livingston Counties, and that number reaches close to 50.

“In New York State, when anyone launches a new beer they launch in New York City or Rochester,” says Chris Spinelli, co-founder of Roc Brewing Co. and a board member on the Association. “We have that kind of market. There’s no beer I can’t get my hands on in Rochester, including the best beers in the world. That’s the kind of culture we have.”

That culture is so strong, Brooklyn’s vaunted Other Half Brewing set up its second location in nearby Bloomfield. A sign, like when Sierra Nevada opened in Asheville, that the city was officially a big-league beer town.

But like so many great things in this part of the country, its rise came from a place of ruin.

A city built on film finds a new way to shine 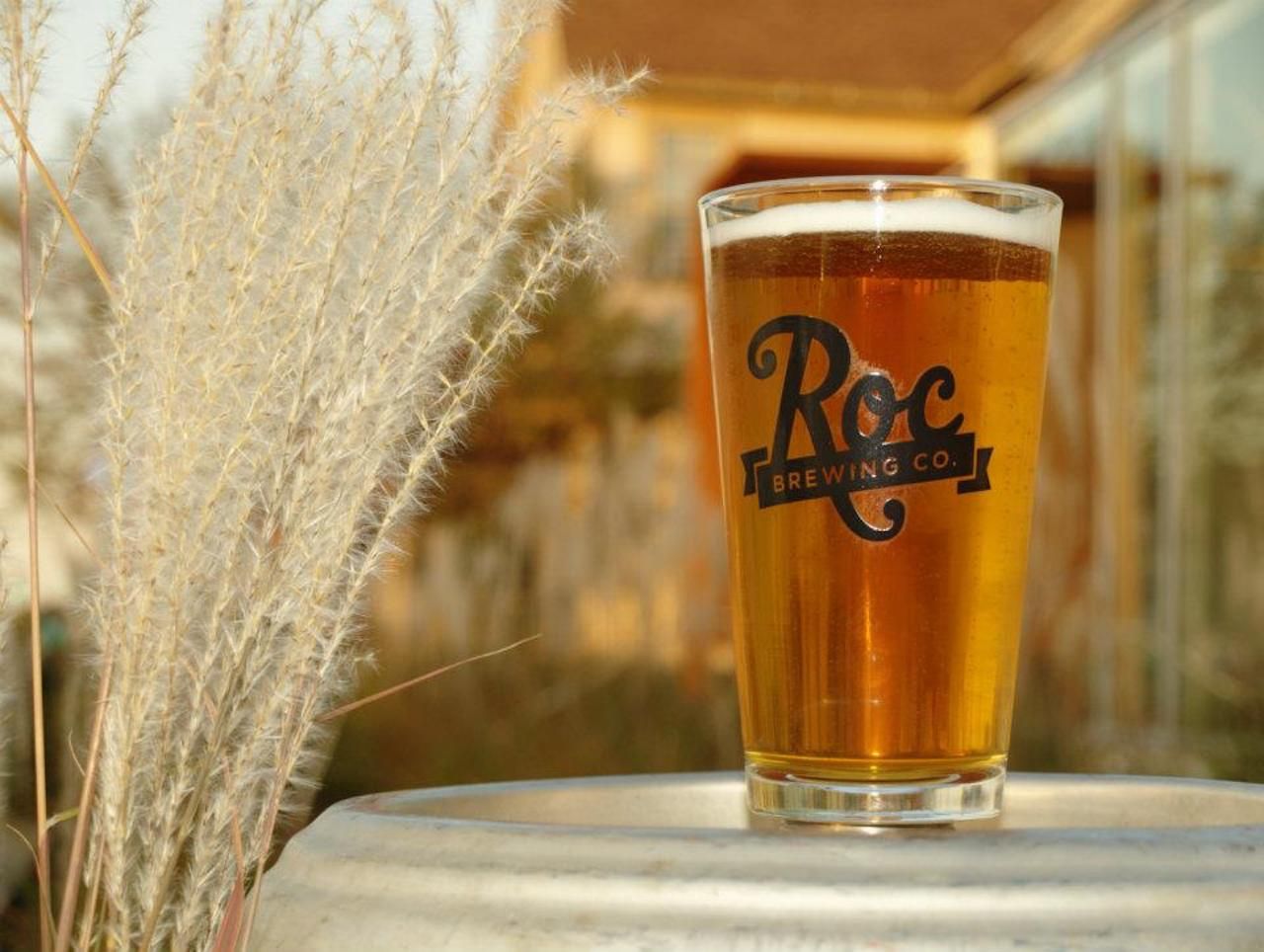 Kodak, once the world’s largest camera and film company, employed nearly 100,000 people at its height. Most of them were in the company’s corporate headquarters in Rochester. Then along came a little thing called the digital camera, and all of a sudden nobody needed film anymore. Kodak cut jobs, and like many cities along the Great Lakes, Rochester had to find new ways to keep people working.

While other rust belt cities looked to tech, healthcare, and smart manufacturing to re-define their cities, Rochester chose to forge its 21st-century identity through beverages.

“We like to call ourselves the front door to the Finger Lakes,” says Rachel Laber Pulivno, the Director of Communications for Visit Rochester. It’s a catchy phrase from a tourism pro, but in this case it’s true. The city is about an hour’s drive from New York’s top wine region, and Rochester’s newly renovated airport is easily the closest.

”You saw Rochester plummet as far as tech was concerned,” says Dean Jones, Brewmaster at Genesee Brewing, the city’s legendary macro-brewer that sits right on the river of the same name. “But the resurgence it’s had has locked on to wine in Finger Lakes as well as beer.”

To wit, the city also boasts a number of urban wineries like Living Roots, which has another tasting room in Australia. Then there’s the new distillery near the massive public market at Black Button.

But nothing has propelled Rochester to the forefront of the national conversation like beer. And much of that is thanks to its biggest player.

A mega-brewery births a micro-brew culture 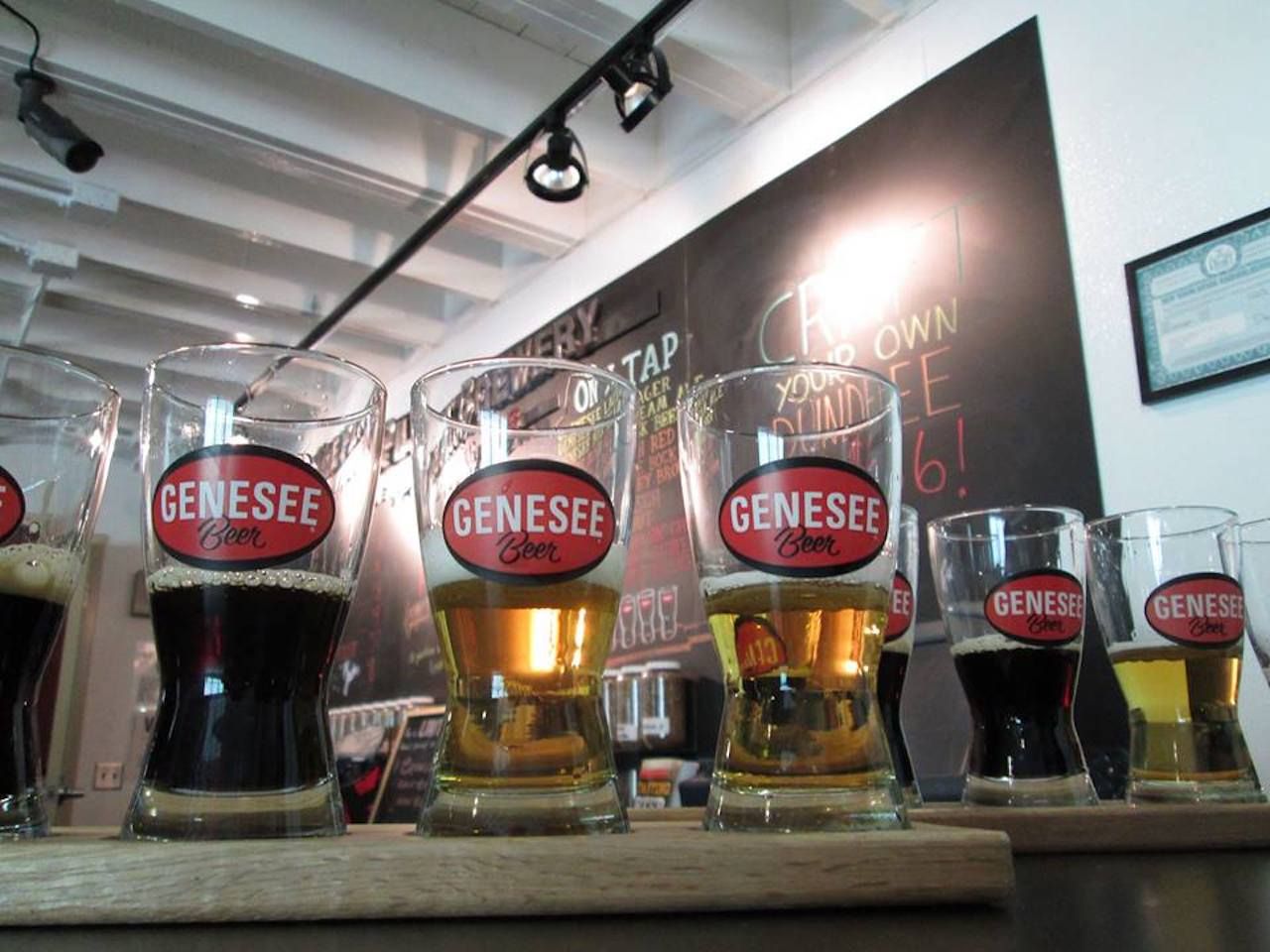 “When I started brewing, there were maybe 30 brewers in America,” Jones says of his early days in beer. “If I had a question, who was I gonna call?”

Knowing how important resources are to a fledgling brewery, Jones and the team at Genesee have opened their doors to smaller, new breweries in a way seldom seen in any industry — even the collaboration-filled beer world.

“Better beer means better things for our city,” says Jones, whose brewery also hosts educational programs for aspiring brewers. “We opened a tasting panel training, we’ve even given yeast to brewers. I try and help them out as much as I can. It’s kinda cool; I love helping these guys. Andy (Cook) from Swiftwater has said he wouldn’t be open if it wasn’t for the Genesee Brewery.”

Genesee’s sparkling new tap house sits right across from High Falls in downtown Rochester, and on a sunny day you can enjoy its iconic Cream Ale or seasonal sensation Grapefruit Kolsch on the patio while listening to the sound of cascading rapids. People lunching on the balcony take pictures of an engraved Genesee glass with the falls behind. If Rochester has an Instagram moment outside the garbage plate, this is it.

But beyond the tourist-friendly setup, Genesee plays a much deeper role in the city’s beer culture. It opens up its labs to brewers to come and experiment with different styles and plays a major role in 585 Brewers Collaboration, where local brewers work together to improve the city’s scene.

Rochester did craft beer before it was cool. 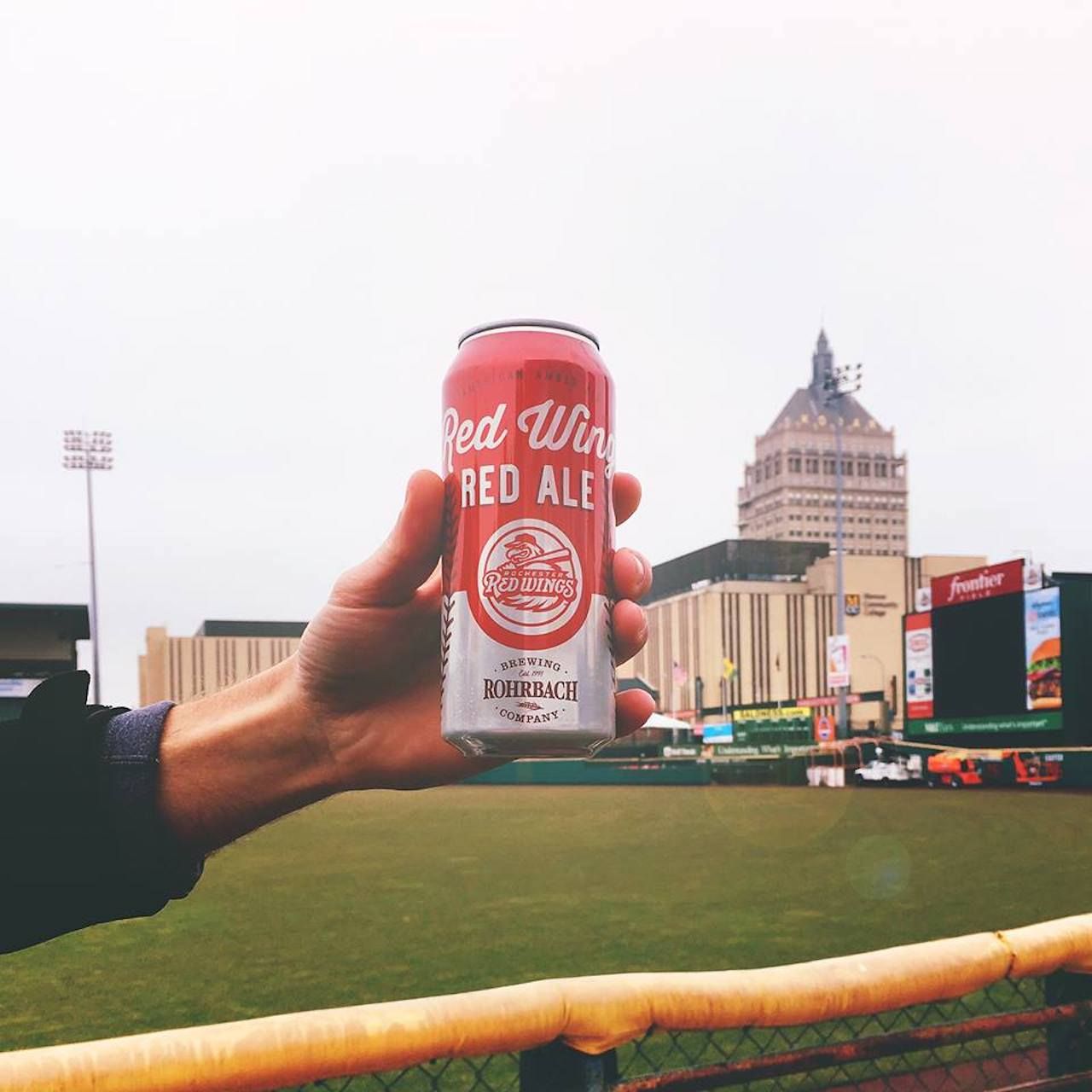 That craft beer scene is a lot older than most American cities’, too. Genesee has been around since 1857. Rohrbach Brewing opened its doors in 1991. CB Craft Brewers in 1997. The last two were started by former Kodak employees. Roc Brewing followed suit in 2011, helmed by Rochester Institute of Technology grad Chris Spinella.

With three solid craft players plus a regional powerhouse in Genesee, the people of Rochester were familiar with craft beer long before it hit the mainstream.

“Frontier Field embraced craft beer 20 years ago,” Rohrbach founder John Urlaub says, speaking of the city’s AAA baseball stadium. “There were national articles that would come out about Rochester saying, ‘Why can’t we get craft beer into pro stadiums?’ A lot of people got to know craft beer because they went to a ball game. And that didn’t happen in other places.”

The population was primed for craft beer, so Rochester was in perfect position to become a craft beer mecca when laws changed to make brewing in New York streamlined.

“The Farm Brewing Law in 2012 made it exponentially easier to get a brewing license,” explains Will Cleveland, beer columnist for the Rochester Democrat and Chronicle. “It requires people to use 60% of their hops and 60% of other ingredients from New York State. That put the impetus onto farmers to grow hops.”

The newly minted “farm breweries” found it much simpler to open their doors and were further bolstered by 2016 legislation that allowed breweries to sell full glasses of beer on premises. The result has been a record number of breweries opening in the state, upwards of 450 at the time of publication. As Rochester already had its feet in the door, so to speak, it was ahead of even New York City when the laws were relaxed. 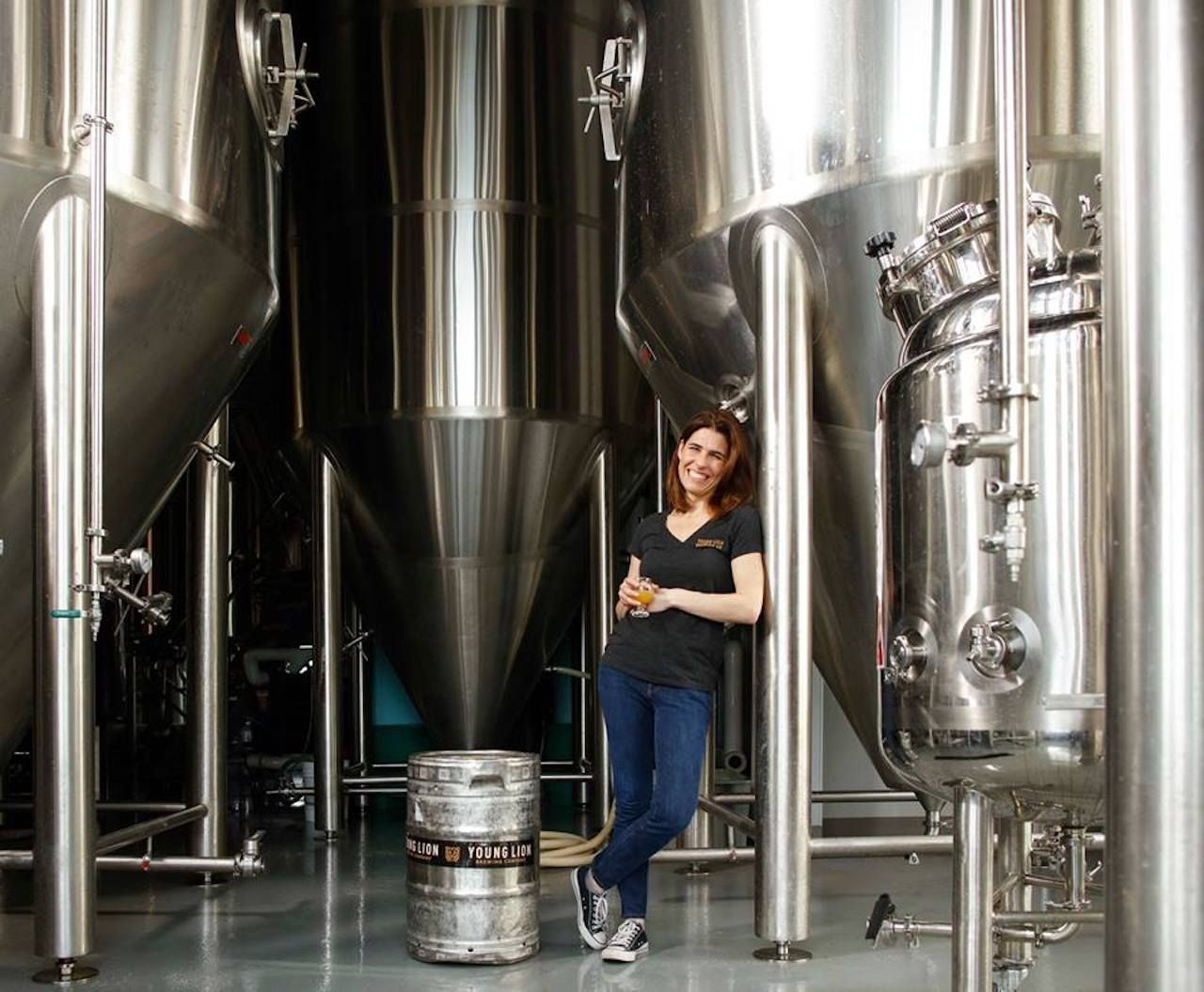 Of course, beer doesn’t make itself, and the people of Rochester are still the biggest reason it’s become a perennial beer A-lister.

“Rochester has a history of activism, with Susan B. Anthony and Frederick Douglass, and philanthropy with George Eastman,” says Jennifer Newman, co-founder and CEO of Young Lion Brewing. She is part of the 3% of the craft beer industry owned by women, and her Canandaigua tap house has an impressive lineup of IPAs. “The community is just very kind and welcoming, and when you layer the beer community on top of that, the two groups fit perfectly together.”

Newman also points out that as an educational center, the city naturally produces the kinds of minds needed for great beer.

“We have an incredibly high per capita secondary education rate. University of Rochester is a huge employer. RIT is here,” she says. “In brewing you have to be a chemist, a botanist, manage operations. That concentration of higher ed helps. We also at one point had a higher per capita of artists than New York City.” 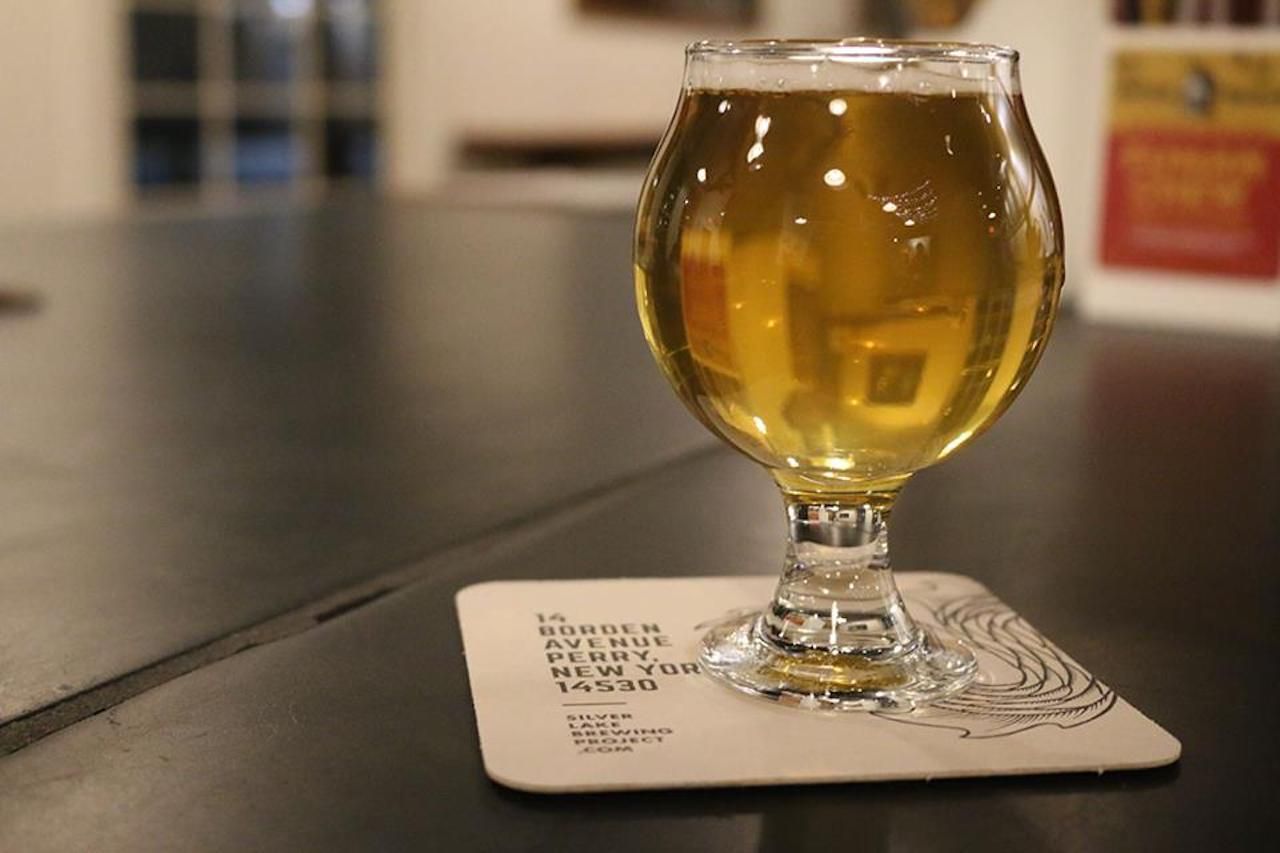 Rochester’s culture of creativity has helped it develop some highly unusual beers too. That Milkshake IPA can be found at a few spots around the city. Stoneyard Brewing makes an Abbot’s Custard chocolate almond custard stout in partnership with an iconic beachside custard stand. I tried an apple pie IPA at Rohrbach, which also makes a Neapolitan ice-cream beer.

“Everyone here is so collaborative and creative,” says Genesee’s Jones. “It’s becoming the North Carolina of the Northeast.”

Somehow, the beer-drinking world hasn’t quite started beating a path to the shores of Lake Ontario. Newman said she’s had visitors from all over the US who’ve stopped in because they love to do beer tours. But Bend, Oregon, it is not.

“We’re a little behind,” says Cleveland of Rochester’s beer tourism. “You’ve seen growth in other destinations, but we’re starting to catch up.”

Sitting along the Erie Canal on a sunny Saturday afternoon at Lock 32, enjoying a Dewitt’s Ditch Belgian Wheat while boats cruise by on the water, it’s hard to imagine a more perfect city to experience through beer. Earlier in the day I’d strolled the massive public market, sampling empanadas, doughnuts, and fresh-pressed juices before saddling up to the bar at Rohrbach. I’d had the requisite lunch on the patio at Genesee and enjoyed an afternoon of hiking the Grand Canyon of the East at Letchworth State Park, followed quickly by a flight at Silver Lake Brewing Project. It might not be the first place you think of as great American beer destinations, but like the Milkshake IPA, Rochester will definitely surprise you.

Food + DrinkThe ‘Garbage Plate’ Might Be New York’s Most Underrated Food
Tagged
Beer
What did you think of this story?
Meh
Good
Awesome

Voters in Rochester, NY Have Found a Better Way To Use Those 'I Voted' Stickers

You Know You Are a Local in Rochester, NY When...