Few cities in the world have a skyline as impressive as Bangkok’s. As such, a rooftop drinking scene has evolved here that’s nearly as memorable as the street food and is far removed from the backpacker scene that crowds the bars and patios of Khao San Road.

Unless you’re willing to pay through the roof for a river-view suite at the Peninsula Hotel, the best way to take in the 360-degree awesomeness that is the Thai capital’s cityscape is to imbibe on a rooftop with a stiff drink in one hand and your phone with its camera at the ready in the other. The city’s rooftops come alive in the evenings as dozens of bars and clubs host happy hours, DJs, and general revelry — though no one will blame you if just stand by the edge, staring at the Mahanakhon with a stupefied look on your face. Just don’t let vertigo grab hold of you — it’s a long way down from those skyscrapers.

There are a few things to know before getting to the best rooftop bars in Bangkok. First, don’t take advice from the casual backpacker at your hostel — that guy in flip flops and a Chang tank top isn’t going anywhere more than a stone’s throw from Khao San Road. It’s not that he can’t hang with the party crowd — his shirt clearly proclaims his worthiness — it’s more that he forgot to stuff a collared shirt and closed-toed shoes into his pack.

There’s a dress code at many of the city’s rooftop establishments, particularly ones in upscale hotels. If you show up looking like you just arrived from the Full Moon Party, you might find yourself sitting on the loser’s bench down at street level, phoning your crew and begging them to come down and join you at the American bistro across the street.

While dress codes vary by location, it’s better to be safe than sorry. Think “smart casual” and dress like you’re going to a coffee meet-up with that person you always had a crush on in high school but never had the chance to impress. In general, this means no shorts, athletic clothes, or open-toed shoes. Also, no tank tops for men.

How to get to Bangkok’s best rooftop bars 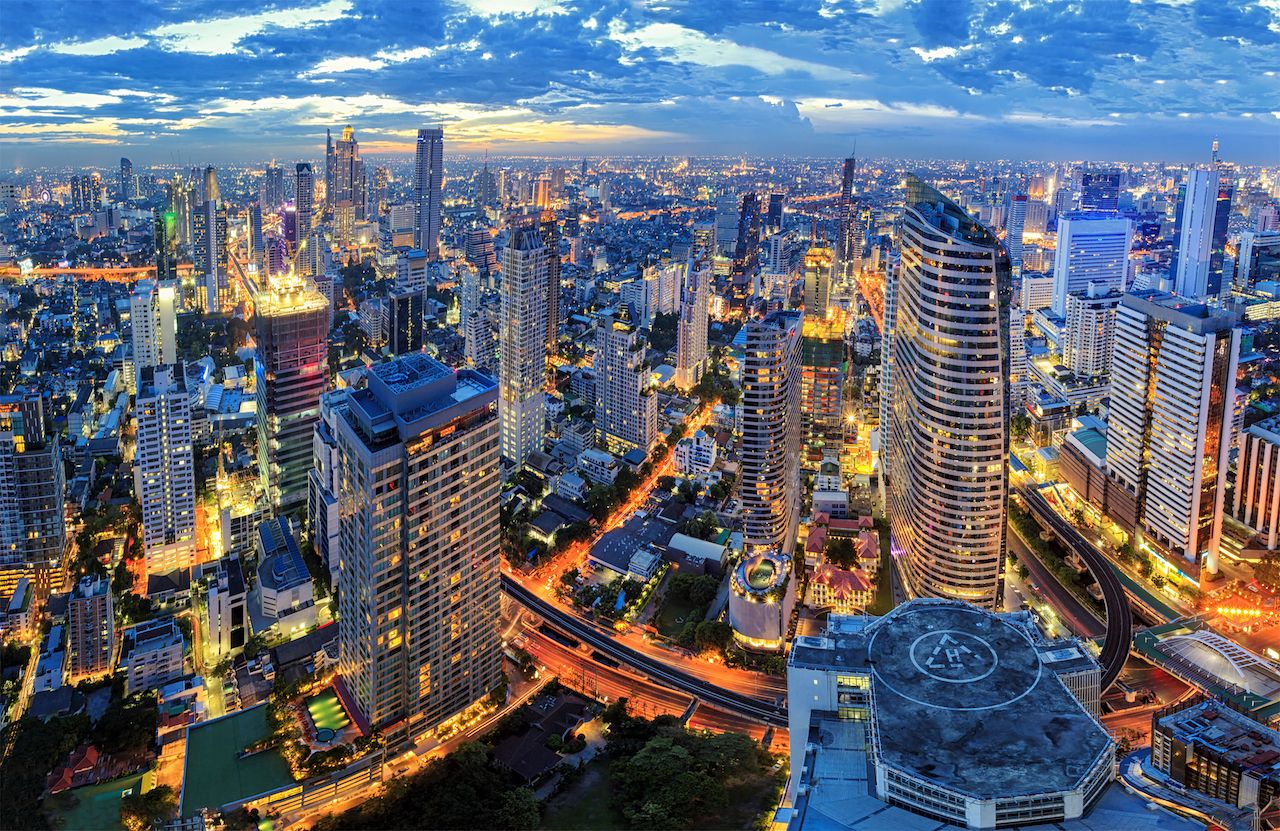 Once you’re properly attired and ready to roll, the next step is battling the horrendous traffic to get where you want to go. Many of the best rooftop options are in the Sukhumvit, Sathorn, and Riverside neighborhoods atop trendy hotels and contemporary office towers. The best ways to get to those areas is either by tuk-tuk or taxi. Tuk-tuks have the benefit of not only being cheaper (as long as you know how to haggle) but also of being able to weave around deadlocked packs of cars. Plus, you can enjoy a roadie on the way, something that won’t fly as easily in a cab.

Technically, bars in Bangkok are supposed to close at 1:00 AM, but it’s normal for bars to work around the law and stay open well into the wee morning hours. This is less common with rooftop bars, however, as the location within high-end hotels and office buildings typically means the bars are going to abide by the law. Most close by 1:00 AM, and those focused more on dining than drinking and dancing may close at midnight. Bangkok is a giant, sprawling city, and its hugeness makes planning a necessity if you want to hit more than one rooftop bar in a night. Start in Sukhumvit, work your over way to Riverside, and, once the buzz is in full effect, hop a tuk-tuk south to Sathorn.

Where to eat after going out in Bangkok 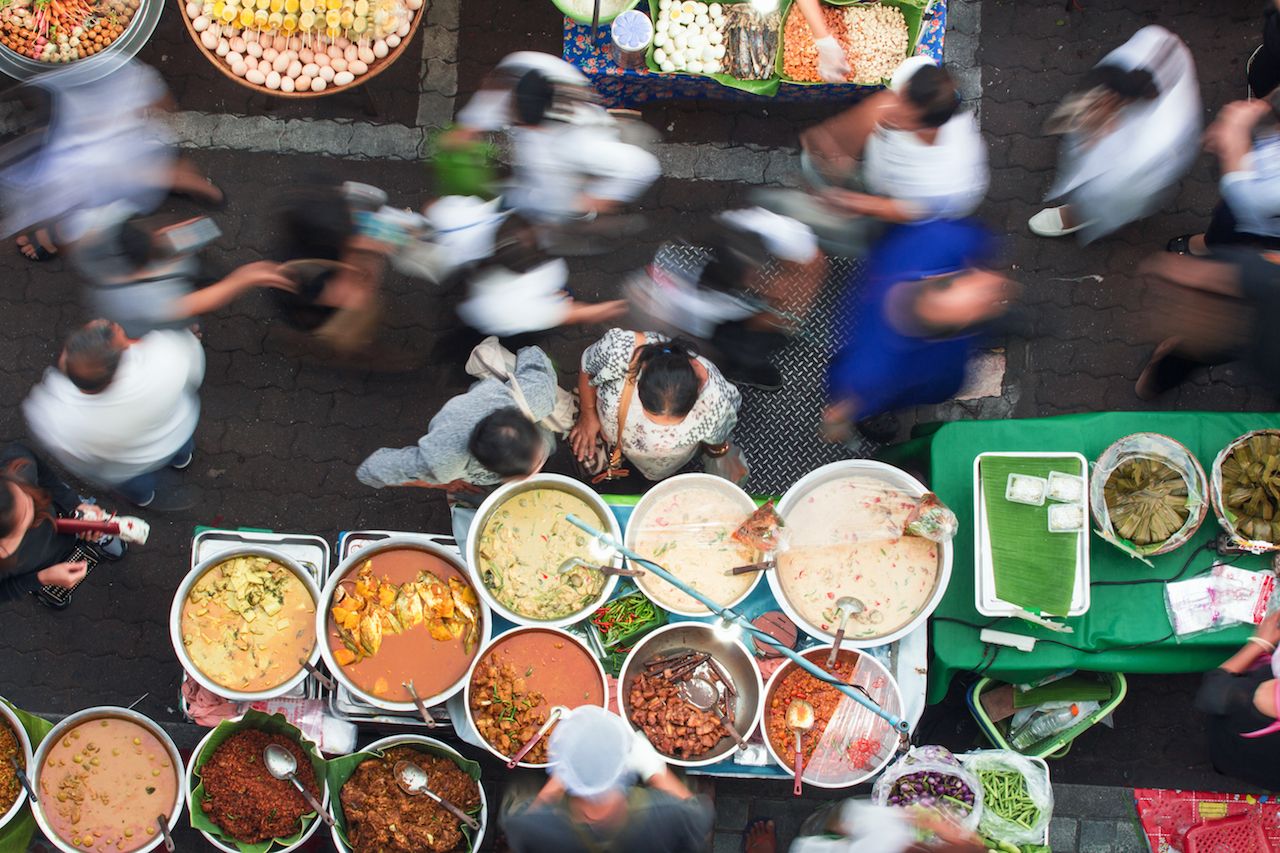 Like all good party towns, Bangkok tends to eat after the evening wraps up. There’s no shortage of street food options anywhere in the central part of the city. There are also plenty of all-night restaurants in case you’re itching for a slice of pizza or a sandwich. But the best option for late-night eats is Foodland, a cozy little hybrid grocery store and cafe that has locations throughout the city.

Expats and locals have long been keen to the concept of huddling in the back of a supermarket and downing a plate of noodles at 2:00 AM, but the secret hasn’t yet made it to the tourist crowd — which means your wait time should be as minimal as the prices. The closest location to many bars in Sukhumvit, Riverside, and Sathron is Foodland Phatphong off the Phatphong 2 Alley. If you have the discipline to tuk-tuk it there without pulling over for street food on the way, you’re in for a sweet reward.

The best rooftop bars in Bangkok

Bangkok has no fewer than 50 rooftop bars. The following nine are the cream of the crop in terms of cocktails, atmosphere, and, of course, the city views.

1. Octave at the Marriott Hotel in Sukhumvit 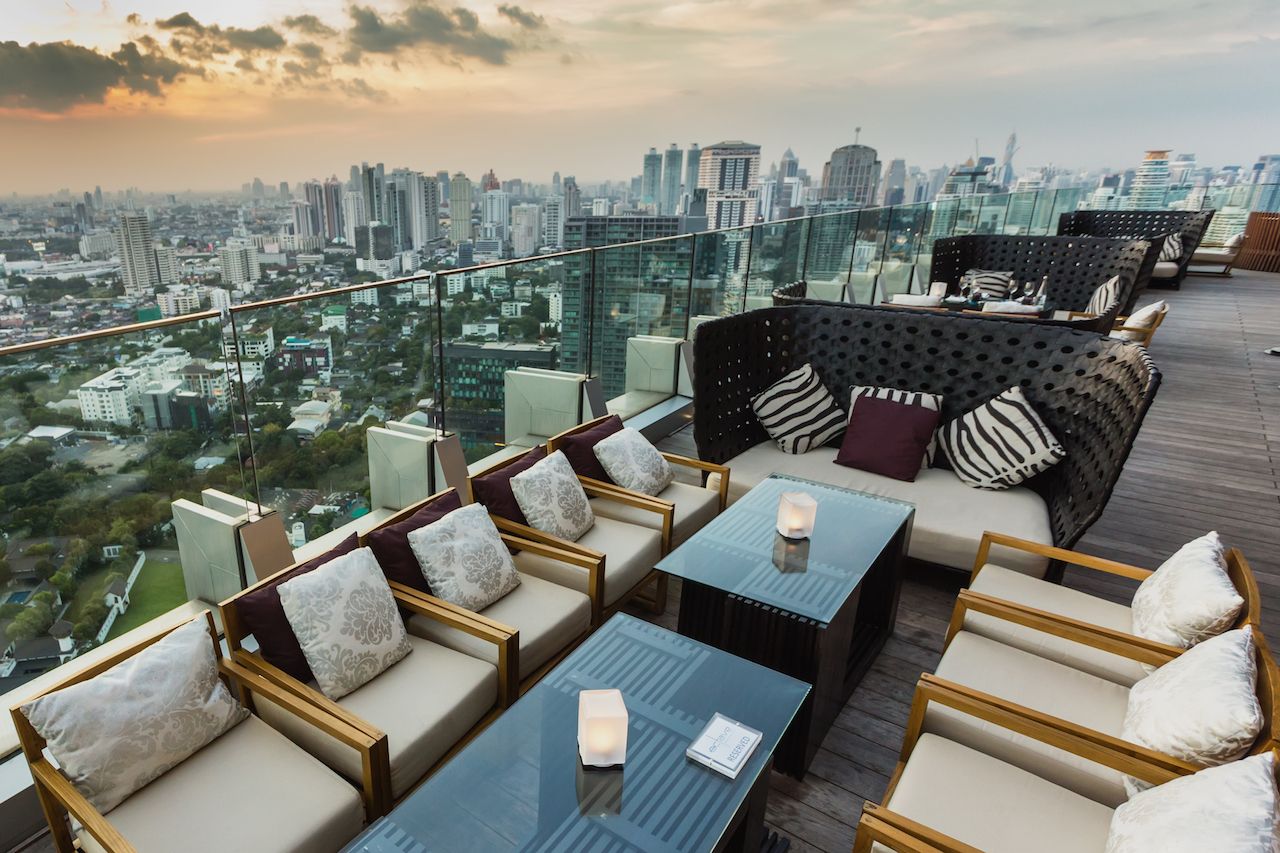 Octave is everything a rooftop bar should be. It’s trendy, offers 360-degree skyline views unburdened by taller buildings across the street, and has a solid cocktail menu. The scene here blends travelers and business folk, often seamlessly enough that it gets tougher to tell the difference as the evening progresses. The bar menu draws on influences from across Thailand, with cocktails like the Chiang Mai (Chivas whisky, apricot brandy, honey, and orange bitters) and the Lamai Beach (Beefeater gin, blue curacao, yuzu and lychee juice, honey, and peach).

2. Above Eleven in Sukhumvit 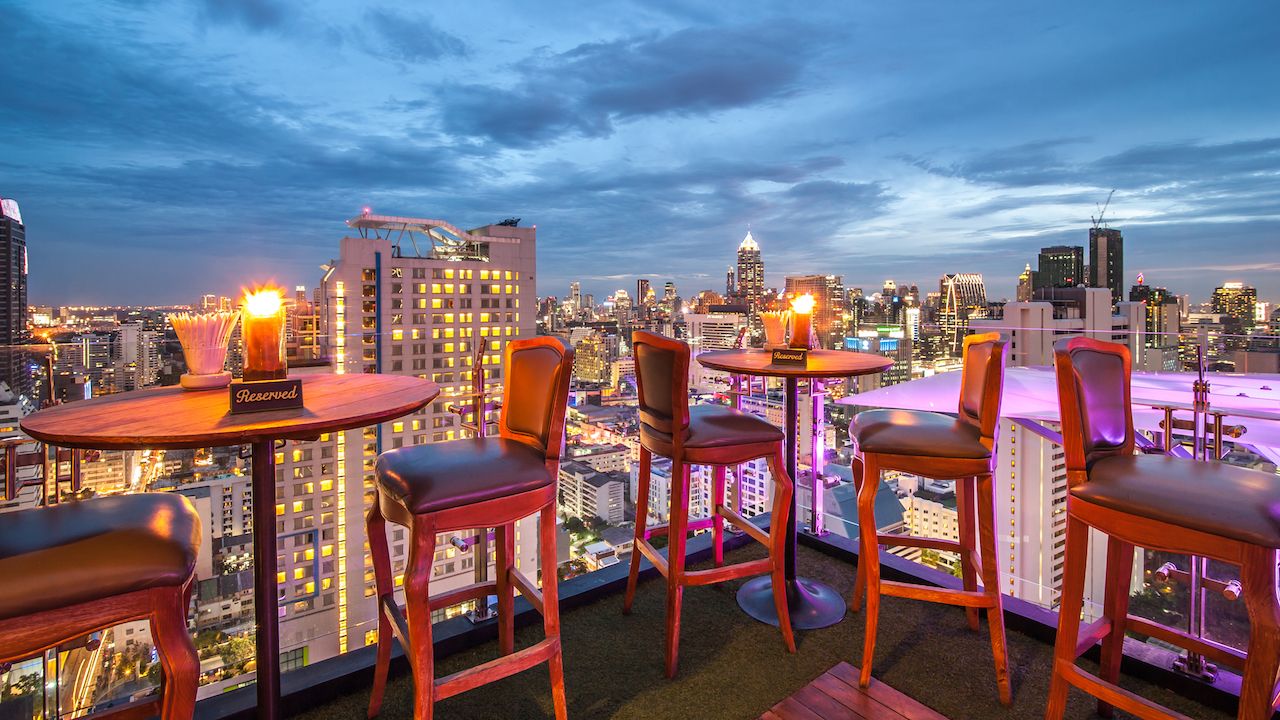 The name undersells the experience here. Above Eleven is 32 floors above Soi 11 in the center of Sukhumvit, a street teeming with nightlife. This is the hub of the Soi 11 scene, and the bar is a staple among the expat crowd and popular with locals and travelers alike. Perhaps that’s because the place is themed after Central Park in New York, right down to the park-bench-inspired couches and imitation green space. Add a Peruvian-Japanese dinner menu and nightly DJs spinning everything from salsa to top 40, and Above Eleven is a slice of the Big Apple in the middle of Bangkok.

3. 342 Bar at the Baan Wanglang Hotel in Thonburi 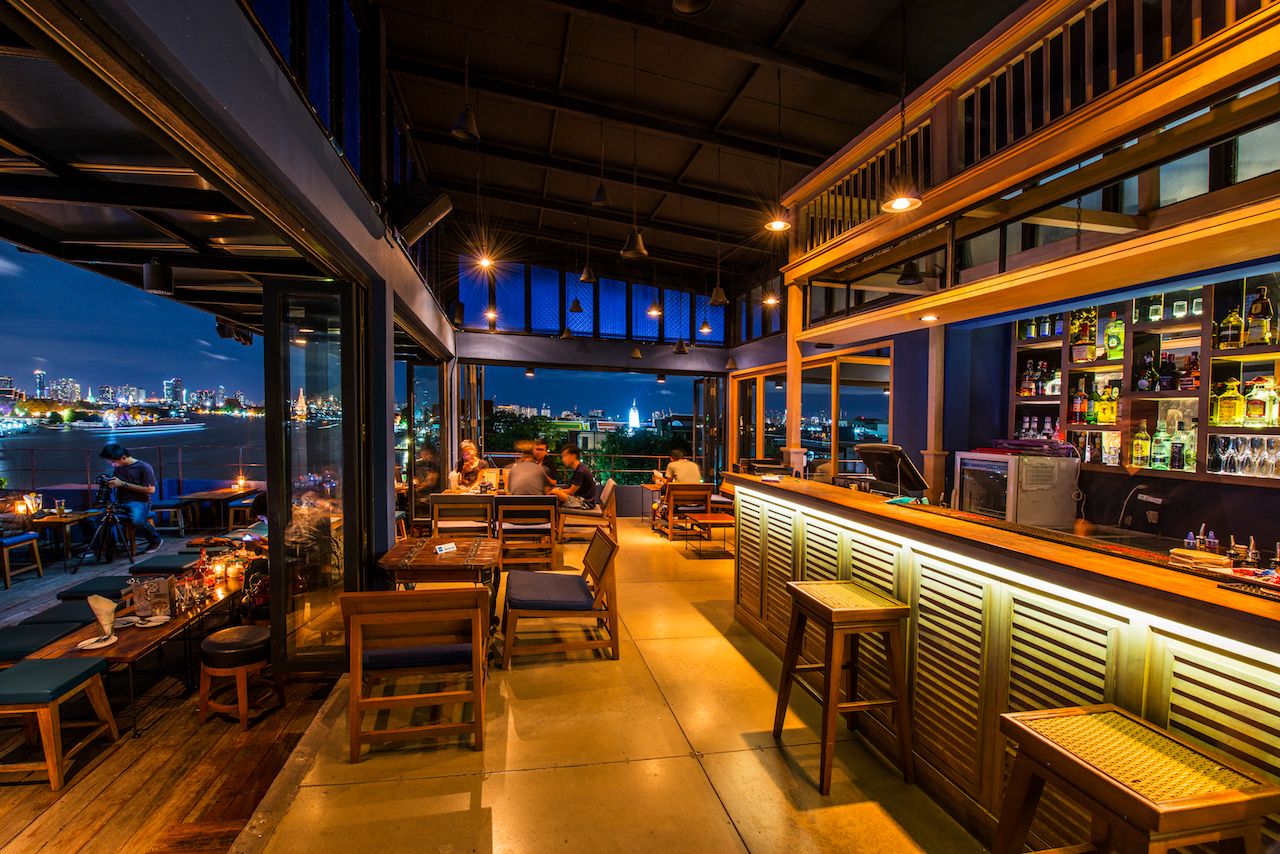 342 Bar has a view of Bangkok that includes most of the other rooftop bars on this list — or at least the building that houses them. Looking east from the rooftop is more dramatic, entertaining, and more addicting than the finale of Game of Thrones. There’s the Grand Palace, the Mahanakhon, and the Baiyoke Tower, all displayed right in front of you in a manner that will make you forget that you’re only on the fifth floor. Grab a riverside table as there’s no better place in town to watch the sunset over the Chao Phraya River.

4. SEEN at the Avani Hotel in Riverside 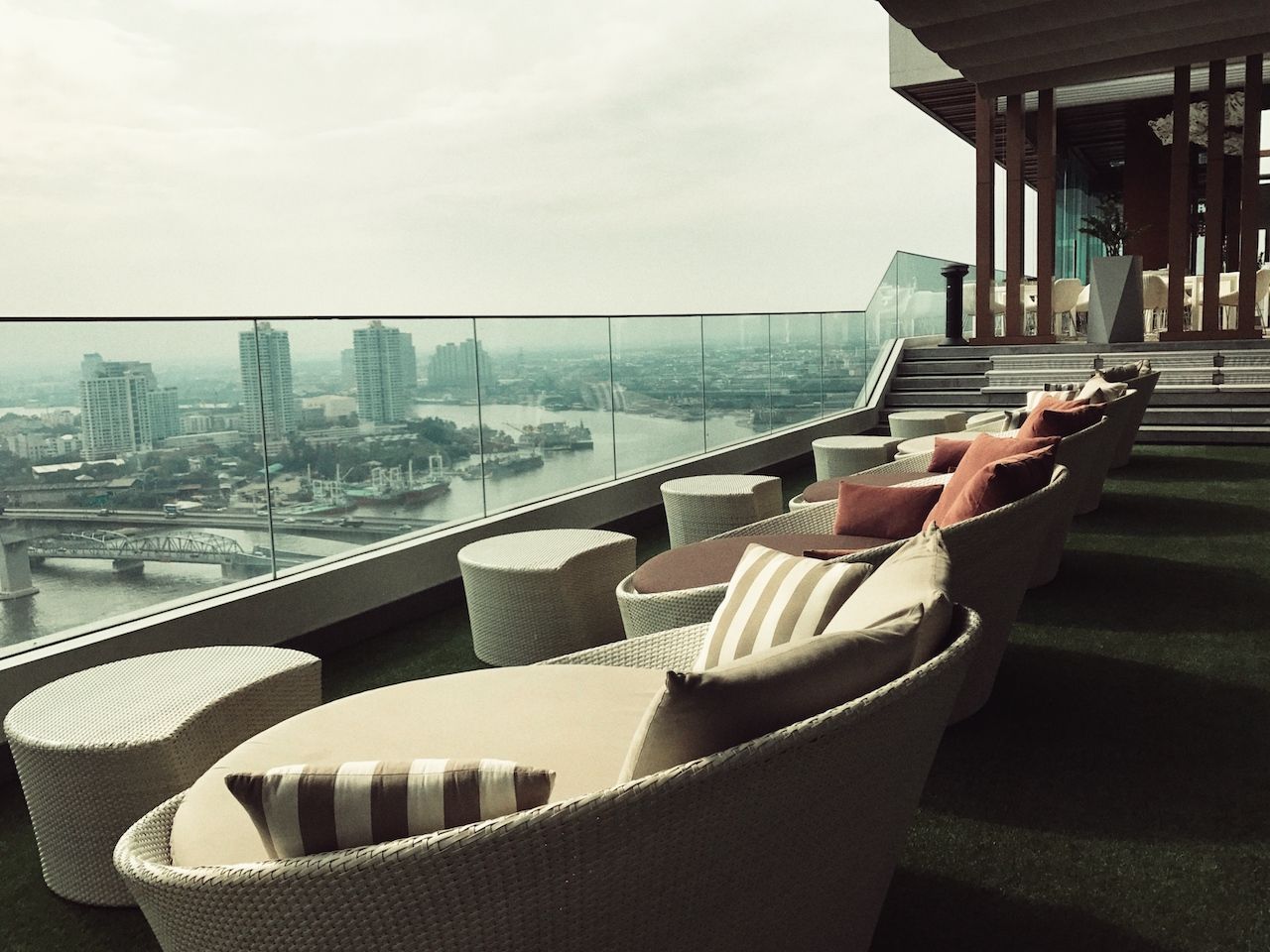 The management of the Avani Hotel was clearly going for a double entendre when they named their rooftop bar SEEN. Formerly the Attitude Rooftop, this is quite a place to see the city and be seen doing so, to the point where you should make a reservation in advance. The 27th-floor patio is as much a garden as it is the drinking wing of chef Olivier de Costa’s global fusion kitchen on the floor below. The drink menu is equally well traveled, with signature cocktails from Thailand, Brazil, and Portugal. One standout is the damn fine Cognac concoction dubbed the Black Diamond. The bar hosts top-name DJs from Bangkok and beyond as part of its Seen Sessions series, which keeps the place bumping until 1:00 AM.

5. Zoom Skybar at the Anantara Sathorn in Sathorn 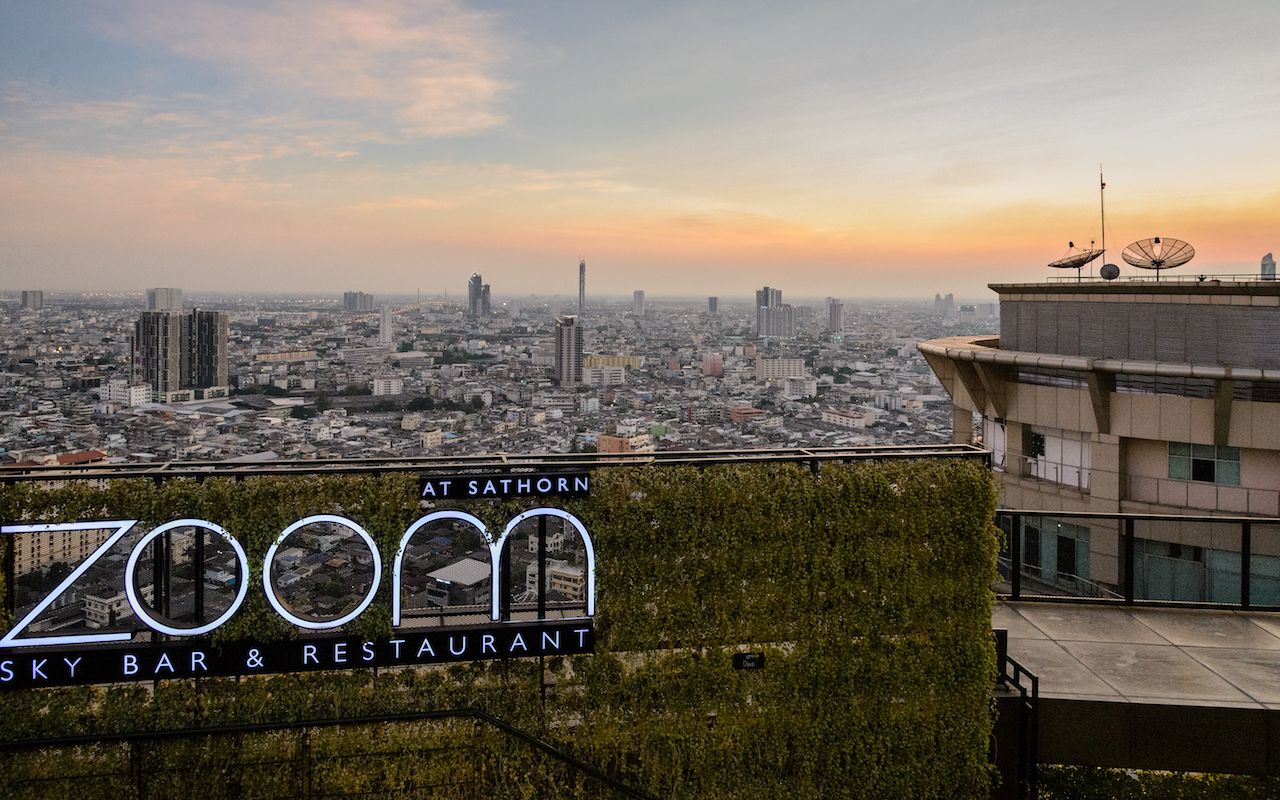 If the perfect gin and tonic is your thing, Zoom Skybar should be the central focus of your evening. The G&T is the bar’s signature drink, and there’s a dedicated section of the drink menu devoted to making this classic as good and as diverse as possible. The bar also serves locally inspired riffs on cocktails like the Manhattan, cosmopolitan, and mojito. The dinner menu features options like Moroccan lamb and fresh seafood as well as a Tom Yum that’s almost half as good as what you’d find on the street — and that’s saying a lot.

6. Distil Rooftop Bar at the Lebua State Tower in Riverside 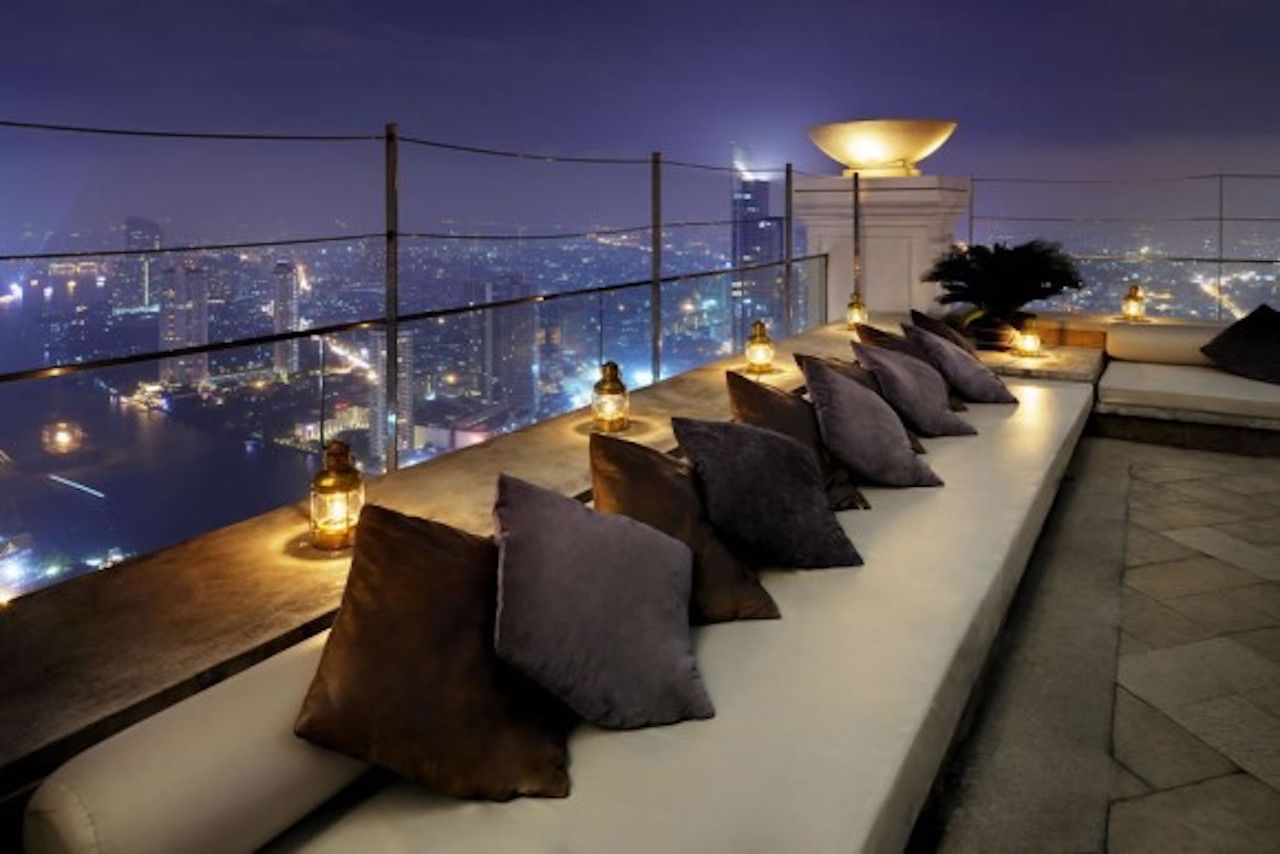 Distil makes this list mostly because of its status as the quiet sibling of its famous neighbor Sky Bar, also located in the Lebua State Tower. While Sky Bar is flanked with drunk tourists pretty much every night, Distil is much more relaxed, and the drinks are made by pro bartenders serving drinks from one of the top cocktail menus in town. Try the signature Thai Lips or Sun Set at the 64th Floor cocktails, and pair it with an order of caviar served on a Himalayan pink salt plate. As you relax over views of the heart of Bangkok, revel in the lack of fist-pumping bros in the general vicinity. Distil also offers a cigar terrace for that stogie you’ve been lugging around since Phuket.

7. Vertigo and Moon Bar at the Banyan Tree Hotel in Sathorn 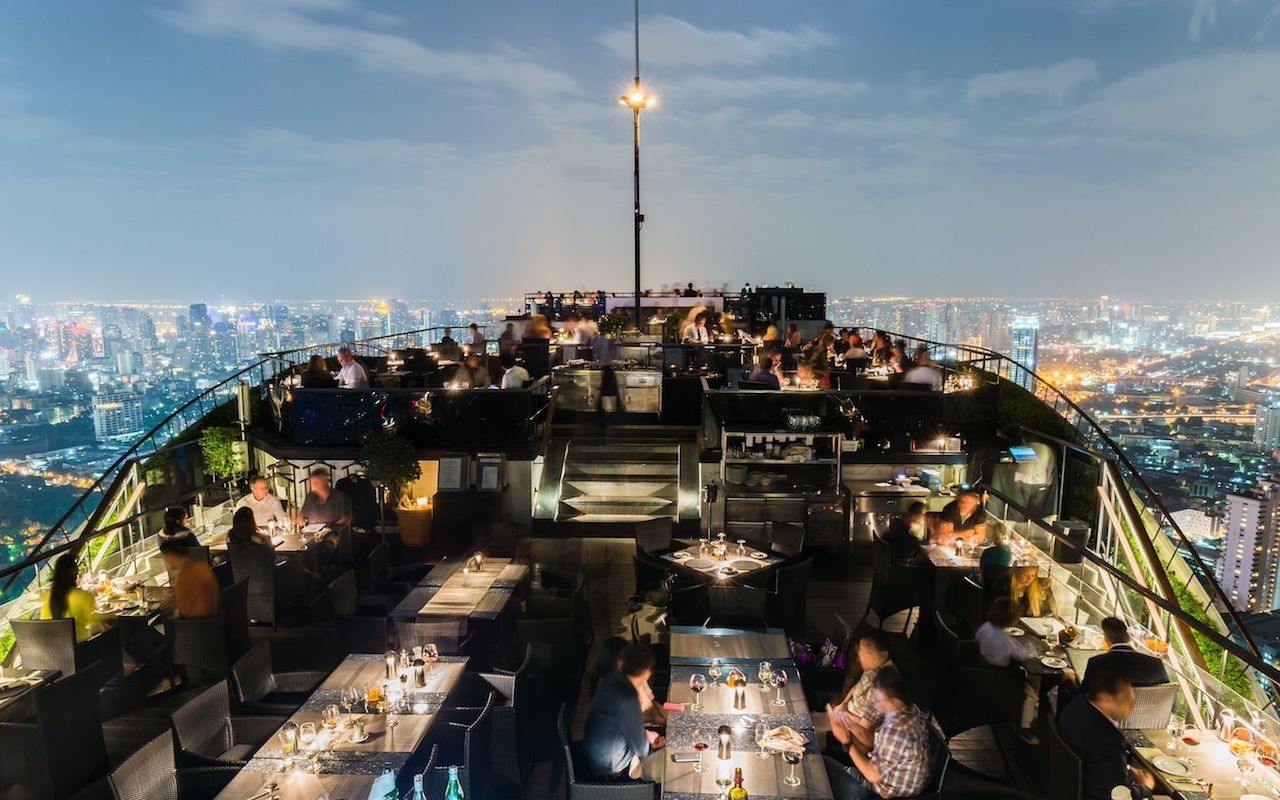 On top of the Banyan Tree Hotel, Vertigo is among Bangkok’s most popular dining establishments. The seafood is on point — think fresh whole lobster that was alive when you walked in. Moon Bar, just above the dining room, is where you’d bring a date to converse over a gin martini or two. Hanging out here puts you in the company of the city’s movers and shakers, or at least those who know how to present themselves as such. Dress to impress, and don’t show up until after the sun goes down. When the bar platform lights up in bright purples, greens, and blues to match the nighttime hue of the city, the mood is set 61 floors up overlooking the vast skyline.

8. CRU Rooftop Champagne Bar at the Centara Grand at Central World in Siam 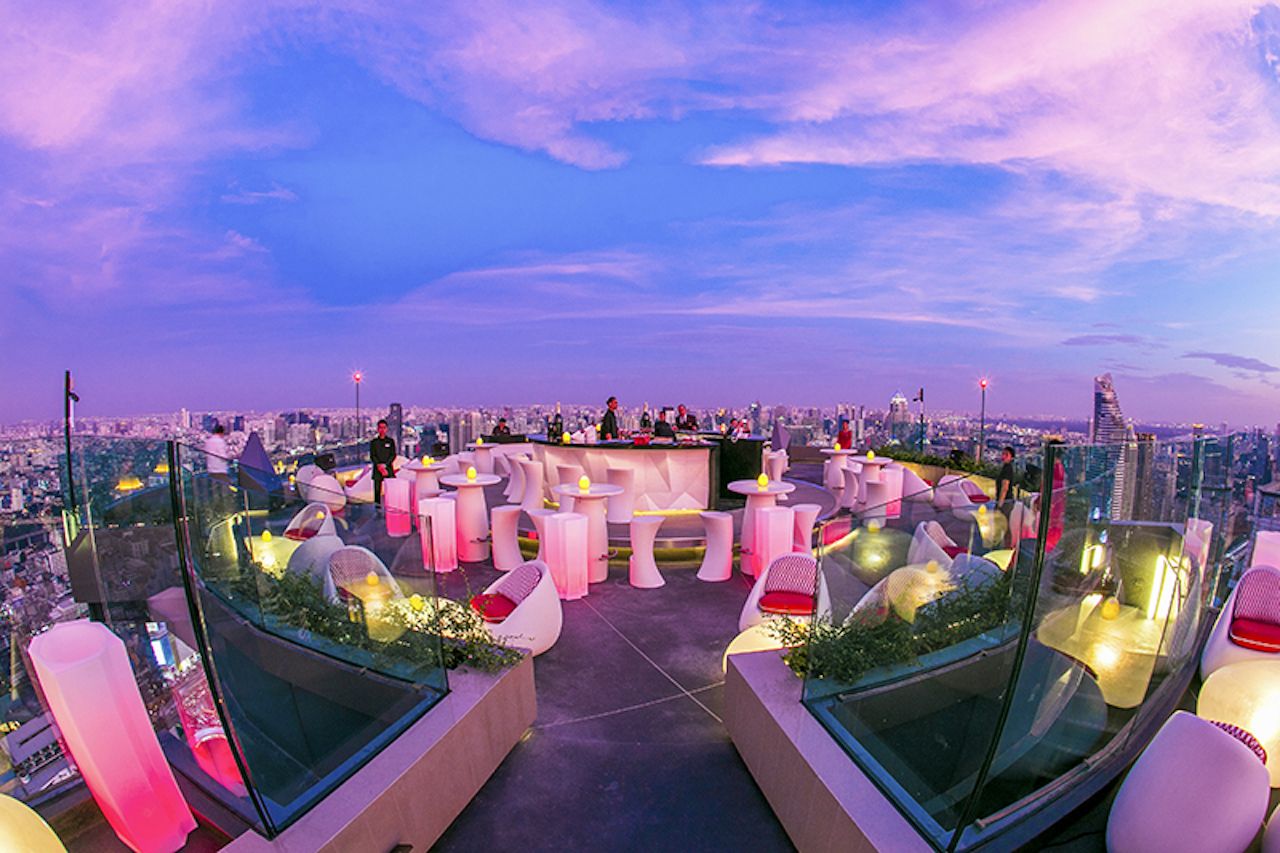 Drinking Champagne with towering buildings all around is a classy affair. CRU Rooftop Champagne Bar is the Thai version of Kuala Lumpur’s famous Heli-Pad Lounge. Full 360-degree views of the city are the signature offer, in addition to a menu built around G.H. Mumm Champagne served chilled or in one of the Champagne cocktails. A few glasses will get you “Sky Dancing” as they put it. Cru is located in the Siam neighborhood in central Bangkok near markets and cultural centers, making it an ideal stop to relax after an afternoon of shopping and meandering.

9. The Speakeasy at the Hotel Muse in Chidlom 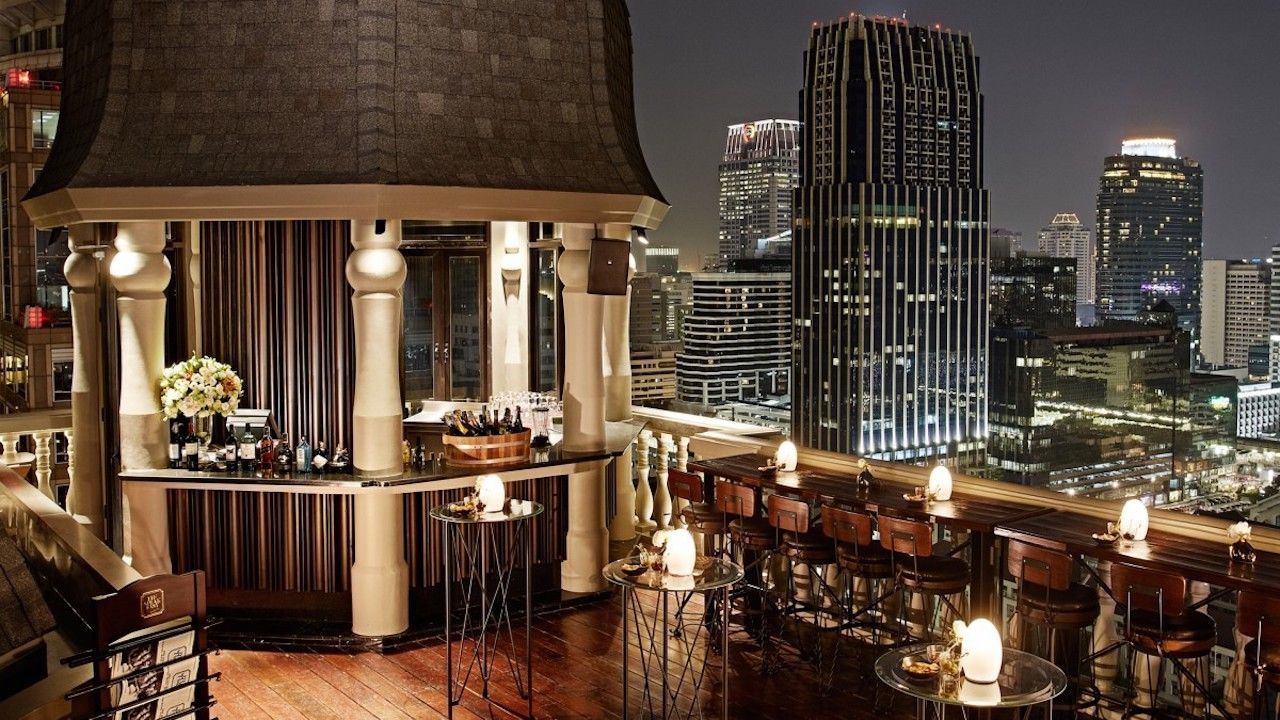 The Speakeasy is Bangkok’s tribute to the people who kept the booze flowing during American Prohibition. Before you quip about how your town already has five speakeasy bars, ask yourself: Are any of them 25 floors above the beating cultural heart of Southeast Asia? Does it serve an authentic Aviation cocktail? The answer is, in all likelihood, a hard no. Find both here at the top of the Hotel Muse, but you should probably make a reservation.