There are a few sounds you don’t want to hear when tent camping. A clap of thunder is one of them. On a recent night in Kiptopeke State Park, Virginia, on the shores of the Chesapeake, my fiance Heather and I heard one and then two, both quickly followed by lightning. At that point, we stopped slowly counting and started quickly throwing our things back into the car.

It was the first night we were testing out the Roofnest Falcon. In a way, the weather was just right. Trial by thunderstorm is about as good of a tent test as there is.

Roofnest is a hardshell rooftop tent company with seven different options ranging from $2,895 to $3,395. The foldable tents are fancier than car camping, plusher than tent camping, and nimbler than hauling a camper around. Plus it’s far closer to nature than hiding out in an RV. And, judging by first-hand experience, it’s a wonderfully dry spot to listen to heavy rain cascade outside.

Camping is primed to have a moment in 2020. It’s among the safest activities in the COVID-19 era, so long as you stay away from crowded spots and follow the Centers For Disease Control guidelines for parks and recreation (something that’s easy to do when your tent can be set up pretty much anywhere your car can park). It’s also looking like 2020 will be the year of the road trip as people avoid claustrophobic airplanes and countries retreat to travel bubbles that Americans aren’t invited to. Driving to where you want to go and sleeping outside isn’t just something to do, it’s close to the only thing that restless souls aching for travel can do. 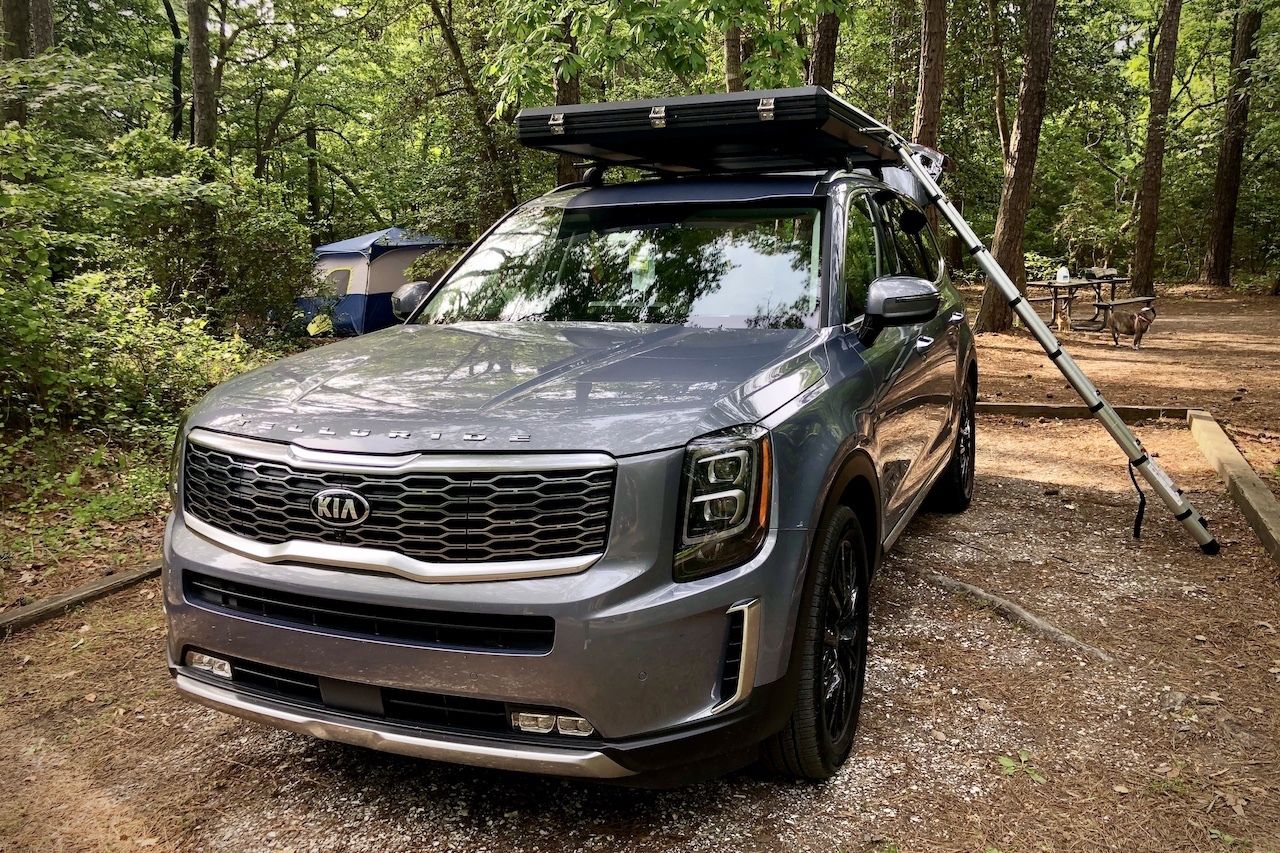 Figuring out how to set up the Roofnest was the first thing on the agenda after checking in at Kiptopeke and driving to our campsite. I had a link to a YouTube video that explained it all — something I put perhaps too much trust in rather than figuring out the tent beforehand. There wasn’t enough service to load the video. Instead of driving back out to download some instructions, we decided to just wing it. There were beaches waiting to be explored and fish to be caught (or, in our case, not be caught).

I climbed on top of the roof and released the two latches holding the Roofnest shut. Then, from the ladder, I pushed it up to fully open. The process took all of three minutes from when I pulled out the ladder to unzipping the door, leaving me wondering if I was missing something or if it really was that simple.

It wasn’t long before the man one camp spot over walked up to ask what we thought about the Roofnest. He liked the look and ease of set-up, and he was thinking about getting one after talking with another person a few spots down who had the larger, three-to-four person Condor Roofnest. We told him he’d be the first to know as soon as we had a chance to figure it out ourselves. This cautious, distanced form of communication — one part curiosity, one part compliment — happened wherever there were people. I lost count of whether the car or the tent got more attention over the weekend. One thing was clear: I had more face-to-distanced-face conversations with strangers about Kia Tellurides and car-top tents than any other topic since March. 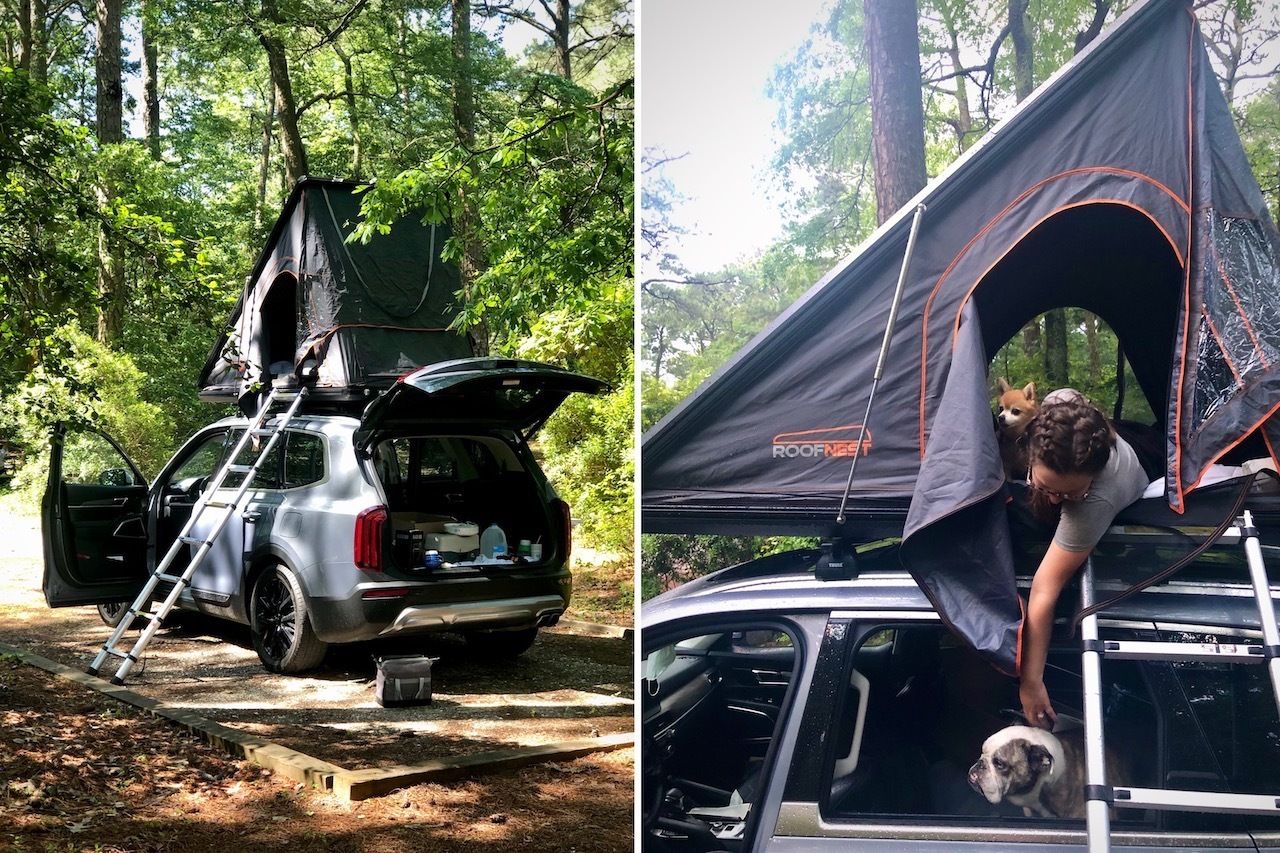 Heather and I didn’t have much time to get the sheets ready and set up before the rain came. The first benefit to sleeping on the roof of the car was clear even before the rain, though: Our campsite neighbors had spent the past hour emptying out their tent by flashlight because the region’s many ground-dwelling spiders had taken up residency.

In our first rush to put the tent up and our second rush to get inside of it, we forgot to extend the awning. Still, there was enough room for the two of us, pillows, a box of wine, and our small Pomeranian-Chihuahua. Our English bulldog slept below in the car, her snores echoing out from the open windows and reaching us in the tent. The three-inch foam bed felt like a nice mattress topper and beat laying on blankets and sleeping bags on the uneven, rocky ground. The exterior kept all of the rain out. While I wouldn’t say I had the luxury of stretching out as wide as possible, there was more than enough space for me, around six feet tall, and Heather, a little over five feet tall, to sleep comfortably without knocking the sides. Really the only downside was how slippery the wet ladder was in the morning.

The campsites around us were taking rain shields off of tents and draping them in the sunlight between tree clusters by the time we got up. Our Roofnest needed a little airing out, but that consisted of leaving it open until we left early that afternoon. 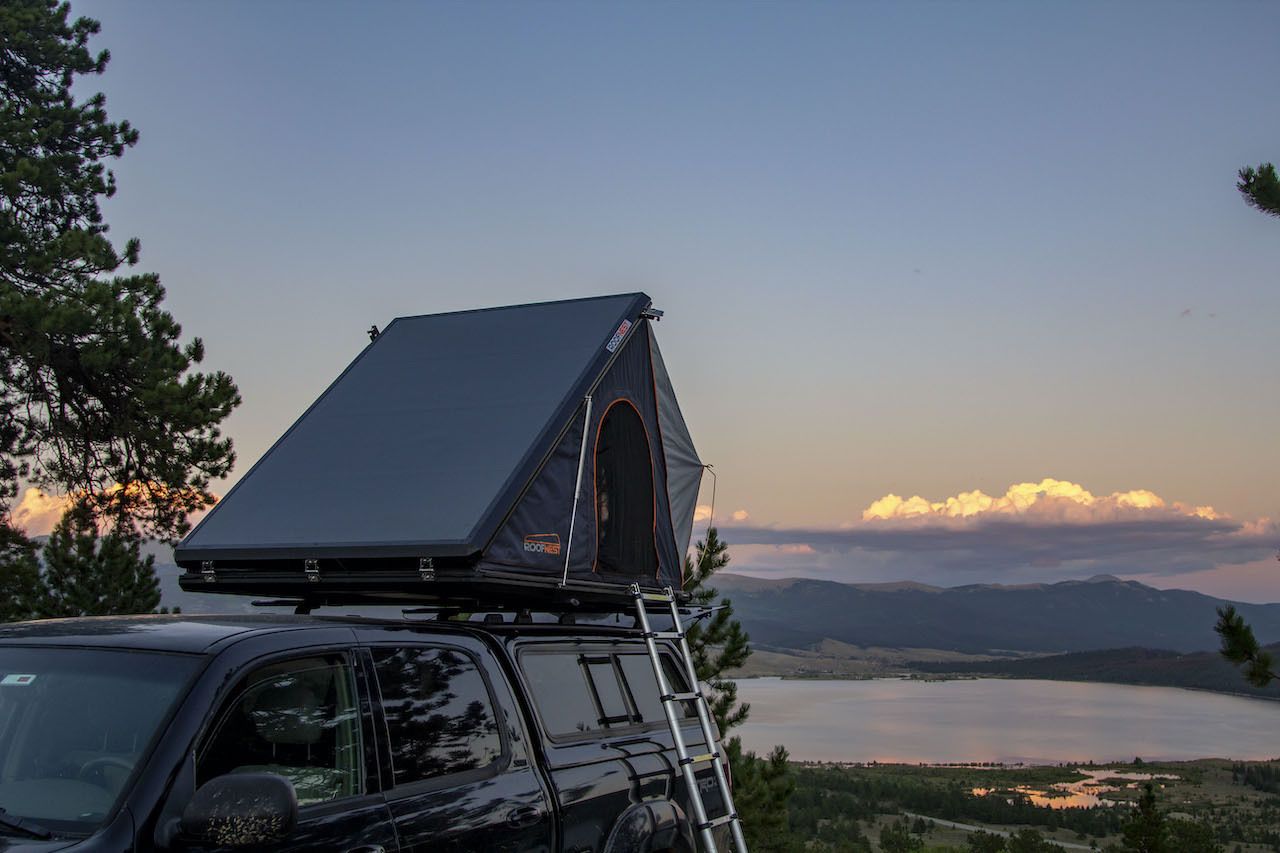 The Roofnest and other tents on top of cars aren’t for everyone. You have to have a capable car, for one, and the price tag is a little too high for someone who only goes camping a couple of times a summer. I didn’t notice an impact on driving performance, though the only car I tested it on was a smooth driving 2020 Kia Telluride, so I’m not sure what it would be like for an older or smaller car. Yet for someone who is looking for a camp-wherever-you-are option, having the Roofnest is an easy way to make last-minute plans happen.

Our campsite neighbor was true to his word. Shortly after we made a fire for breakfast, he walked to the edge of our site and asked how the Roofnest was. Our well-rested answer was simple: If he’s looking for an easy two-person tent, few things are better suited to the era of road trips and COVID camping than a rooftop tent.

CampingFrom Tents To Glampsites, Camping Will Be Our Savior in 2020
Tagged
Camping Road Trips Technology + Gear
What did you think of this story?
Meh
Good
Awesome