For a casual spectator, the scene at the marina in the Azorean village of São Mateus da Calheta looks like a typical summer evening on the water. Kids jump from the dock into the gas-slicked water, raising giant plumes of fuel-scented ocean. Boats crowd around the shore, passing beers and grilled meats. Boys and girls flirt in the summertime sunset while vendors sell ice cream, seafood, and drinks from food trucks lining the street.

Then a firework goes off, and all hell breaks loose.

From around a corner, a massive black bull comes charging down the dock, and the crowd leaps into the water to avoid its path. Boys jump atop the marina’s retaining walls, and what’s left of the crowd bum rushes the far end of the dock, screaming and laughing simultaneously.

The bull changes course, now charging the group of men that has snuck up behind it. It runs the other way down the concrete dock, scattering the men into the water. But they’re not safe there. Irritated by their taunts, the bull jumps off the dock into the water, swimming after them as best it can. It might drown were it not for the ropes around its neck, held by four men dressed in white shirts and hats called pastores.

They drag the bull up the boat ramp where children wait with red capes and soccer balls to taunt it some more. One chucks a ball and hits the bull square in the nose. It then pivots and charges the kid, who might be 10 years old. The boy scurries away, jumping back in the water. 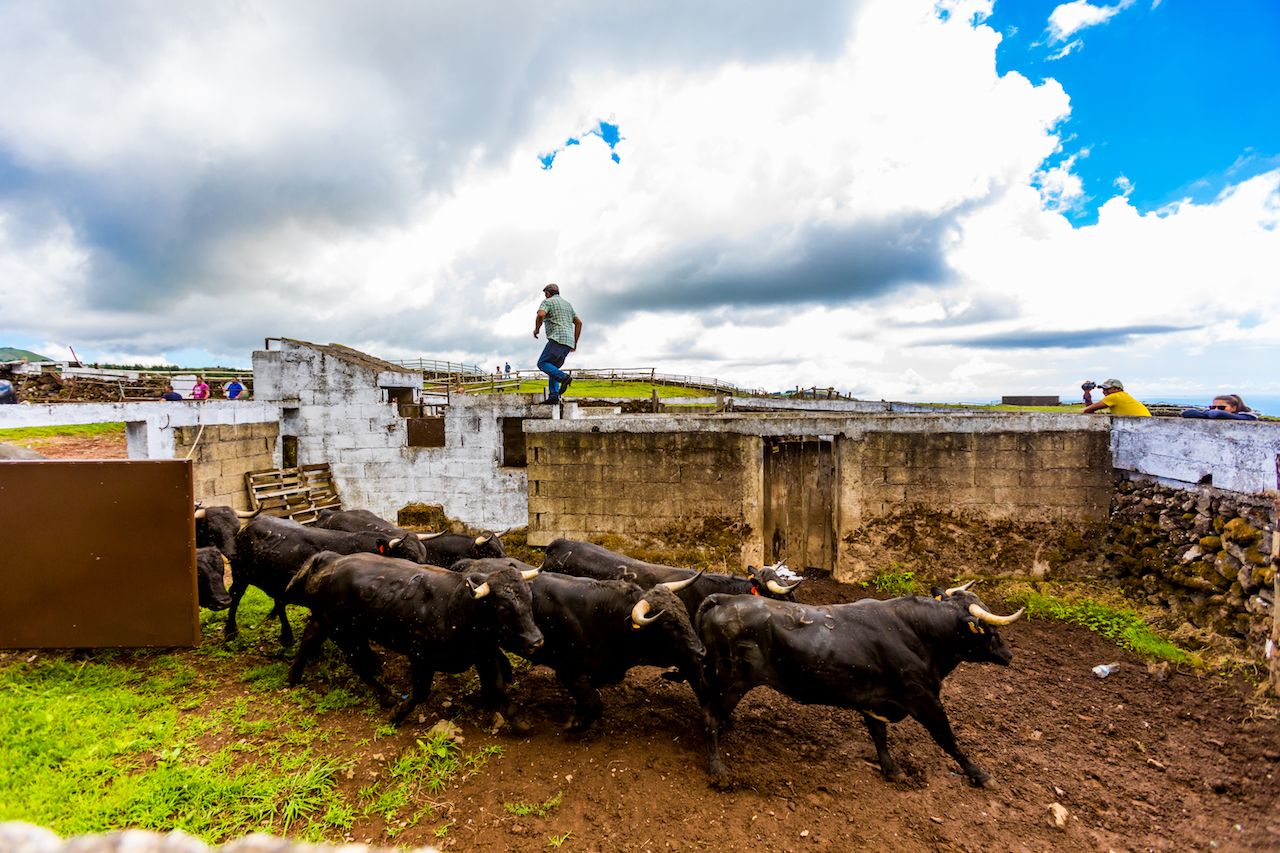 Terceira: An island that loves its bulls.

The scene along the water at Sao Mateus is called touradas a corda — or bull on a rope. It’s a sort of town vs. bull fight where the pastores each hold one rope as the beast is unleashed on the city streets. They’re the highlight of summer street festivals held in villages throughout Terceira in the Azores Islands. Kinda like your neighborhood BurgerFest, except at the end, a big angry bull goes charging down the street.

The island is big on its bulls since they literally defended the Portuguese island from a Spanish invasion during the 16th century. When King Philip sent the Pedro Valdes to Terceira for a diplomatic takeover, its crew was met by 600 angry bulls and subsequently wiped out. The event is immortalized by an unavoidable 33-foot-tall monument at the entrance to the historic city of Angra do Heroismo, which has bulls that are, shall we say, anatomically correct. This makes some visitors a little uncomfortable, but it also opens up endless possibilities for Instagram captions.

Up in the hills around the coastal villages, bulls and cows fill the landscape. Earlier in the day, we stop by a concrete bullpen by the side of the road where kids are climbing the wall to see what’s inside.

“What’re they looking at?” I ask one of their mothers, who like me is standing on a retaining wall across the street to view from a safe distance.

“They’re picking bulls for the fight tonight,” she tells me. “The meanest ones; they run them in the streets.”

The cowboys inside the pen cajole and corral the bulls into different sections, looking to see which ones try to leap over the wall at the child spectators. One charges straight at a fence, crashing into it as the kids in the street jump back.

“They’ll probably pick him,” the mom tells me. 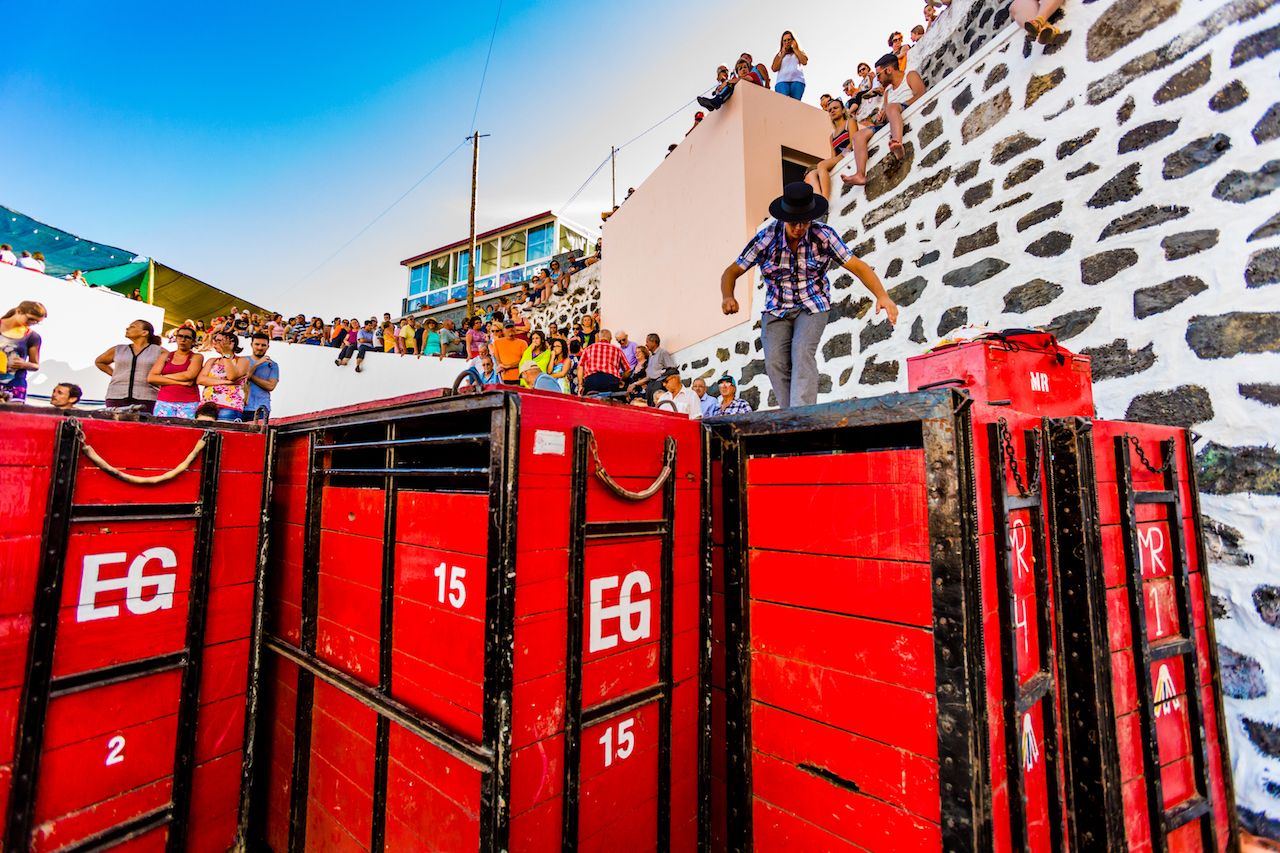 Get video or survive a bull rush? It’s a tough choice.

Back at the marina, the pastores are lining up to bring another bull out onto the streets. They’ll run three bulls tonight, each getting about half an hour to wreak as much havoc as it can before getting herded back into little red transport cages.

I approach a cage that’s ratting like it has a velociraptor that’s trying to escape.

“Bullshit!” Someone yells at me. I look over as one of the pastores — he looks about 21 and a little out of shape to be pulling a bull around — points to the ground. About six inches in front of me is a heaping pile of brown sludge, maybe 18 inches in diameter.

“Bullshit, right,” I say back to him.

He and his fellow pastores wrangle with the bull, each one getting a cord around it so they can exert some control. The ropes provide a bit of a barrier, but people still get hurt all the time.

“Usually, about one person a year dies,” my local guide tells me, as matter of factly as she’d tell me people get speeding tickets. “It’s how the guys prove their manhood.”

This is true. Aside from a couple of curious tourists, there are exactly zero women on the streets when bull number two is released. They all stand somewhat safely on the street above the marina, watching males from five to 50 do what stupid boys do.

After watching the bull lurch towards a lot of people but not actually hit anyone, I’m getting an unfounded sense of safety. I run to the front of the pack where a couple of teenagers in wetsuits are waving at the bull to run their way. Like any good American tourist, I immediately pull out my phone to get some video. Strangely, the locals don’t seem as concerned with documenting their bull run for social media. 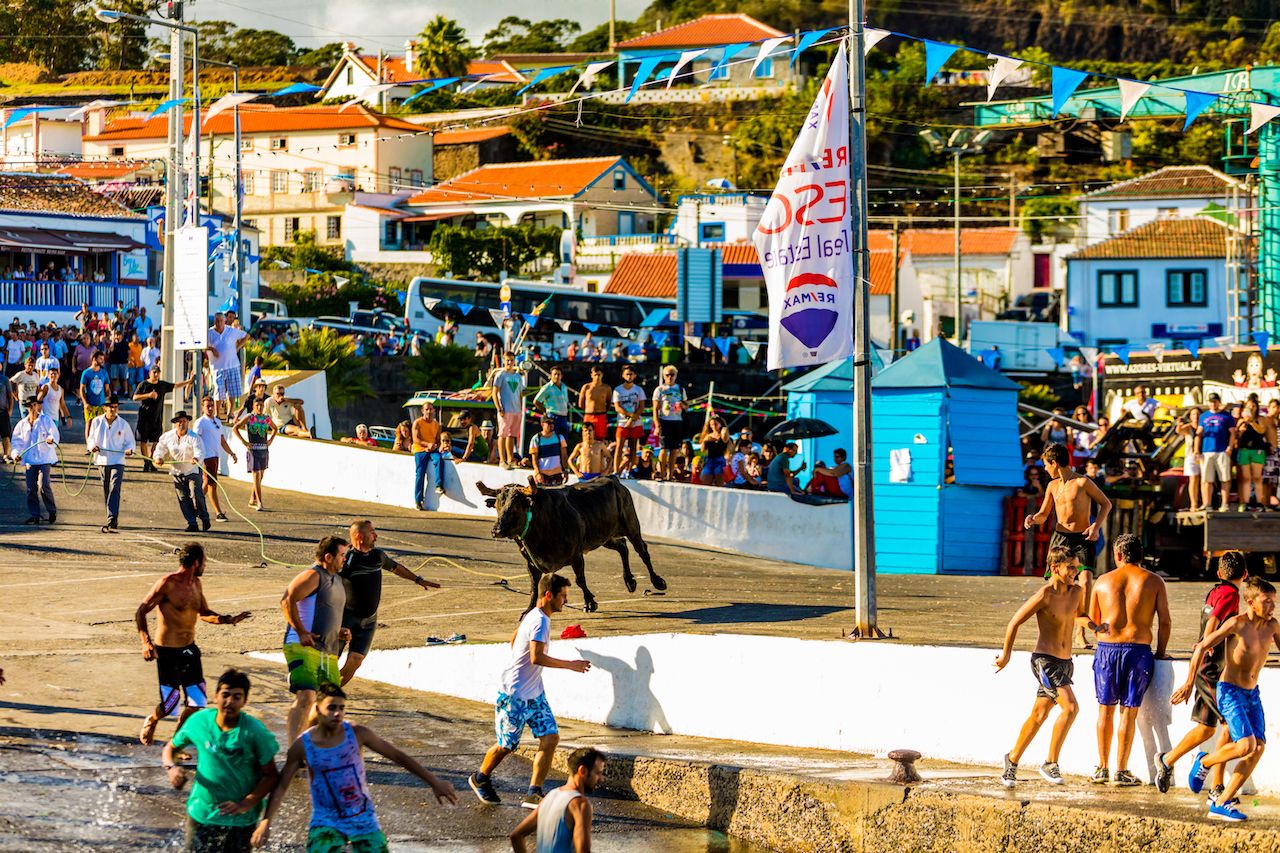 In the wet hot hysteria of a waterside bull running, my Instagram story isn’t opening as seamlessly as I’d hope. I stop and look down at the screen and try to reset it, then feel a mass of people rushing past. This seems like a good cue to pull my head out of my phone and see what all the fuss is about.

You don’t know terror until you look up and see nothing between you and a giant, charging bull. It’s not exactly the feeling of imminent death — more like the feeling that you’d better find your inner Usain Bolt or the night’s not ending well for you.

This would be the rational thought, anyway. The American tourist’s thought, however, is more like, “This video is gonna look BADASS!” 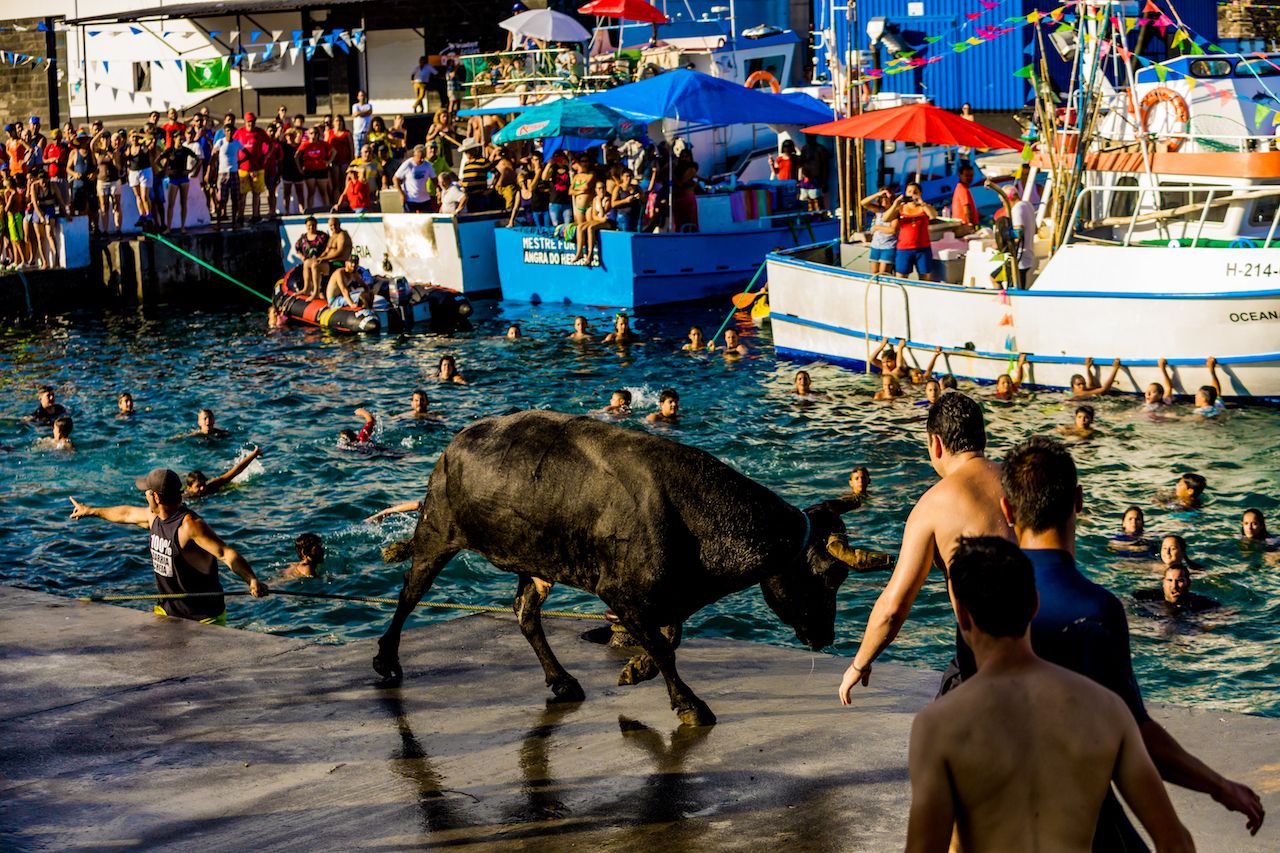 After getting as close as I care to, I opt to hang back and watch the local guys show their machismo by taunting the big, black beast. The bull eventually gets tired and allows itself to be wrangled back into its cage. For today, anyway, nobody gets gored.

“He gets a few weeks off after this,” my guide tells me while enjoying an ice cream cone from a street above the marina. “The stress is a lot; since he was brave they let him rest.”

The street fair carries on. Boys, emboldened by their encounter with the bull, approach the girls sitting on the walls as a sort of summertime courtship. The pastores take a well-deserved break while I head to a food truck for a beer. 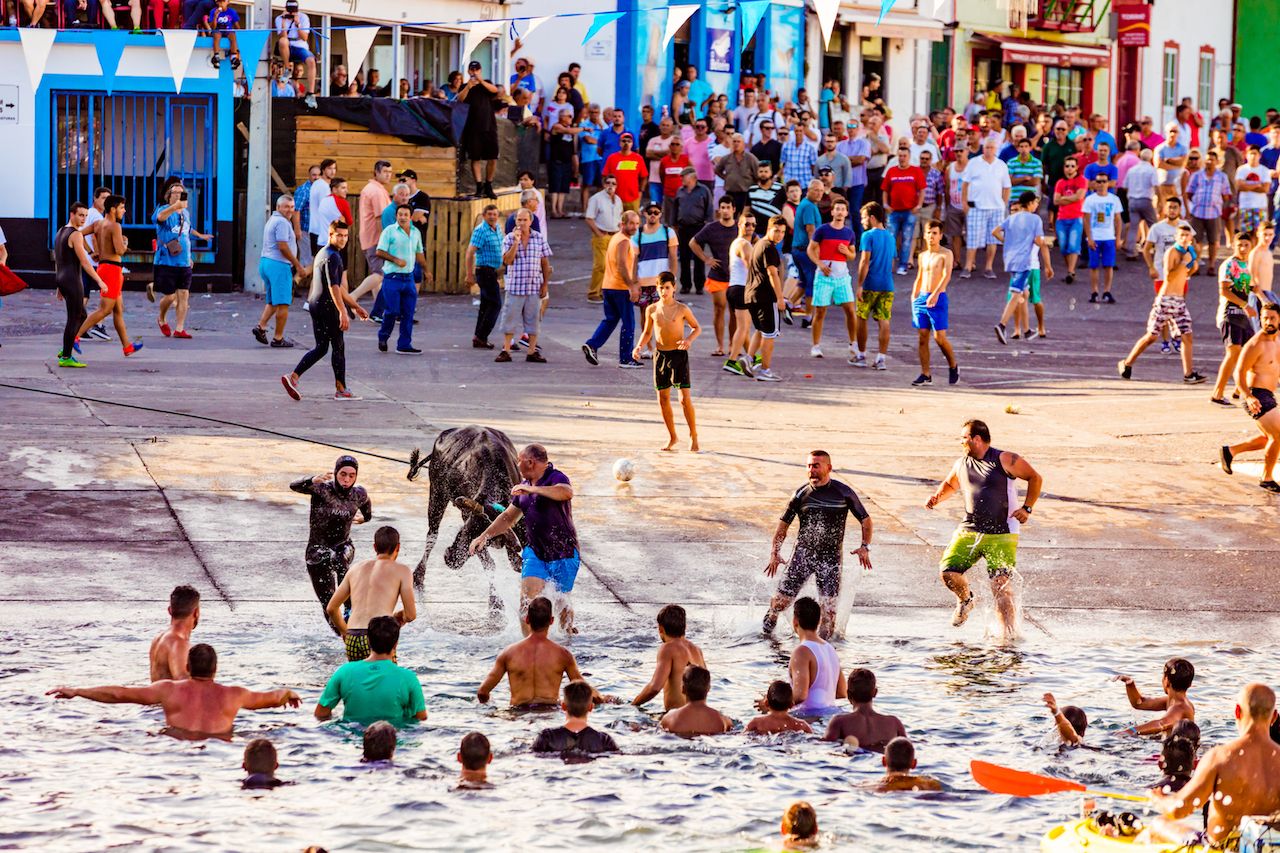 Pamplona it was not, but running through the streets of a small Azorean village with a monstrous bull is still a fierce rush of adrenaline. Though it might not be America’s idea of summer fun — and like all bull-related activities, it’ll likely become controversial if it gains popularity with tourists — it’s a tradition you won’t find anywhere else in the Azores, and one you need to experience on the island. Just maybe leave your camera with someone a safe distance away.

Coffee + TeaIn the Azores Islands, You Can Drink Tea Straight From a Volcano
Tagged
Beaches and Islands Culture Festivals Narrative Azores
What did you think of this story?
Meh
Good
Awesome

Surfing the Azores With Greg and Rusty Long