As one of England’s most beautiful and famous cities, Salisbury is full of amazing things to see and do, yet the city has somehow remained off the itinerary of most visitors to England. Most stop at Stonehenge and bypass the city entirely despite it being a mere 18-minute drive from the monument. The town is also just two hours from London by train, and it’s perfect for a day out or a short break as it’s a city rich in heritage and history and offers a tremendous sense of community. We’d recommend forgoing the lines at Stonehenge altogether and spending your whole day in this welcoming city instead. But if you absolutely must see the ancient pile of rocks, here’s why you should at least add Salisbury to your Stonehenge excursion — we bet it’ll be the part of the day you’ll actually remember for years to come.

Hike across the area’s history at Old Sarum. 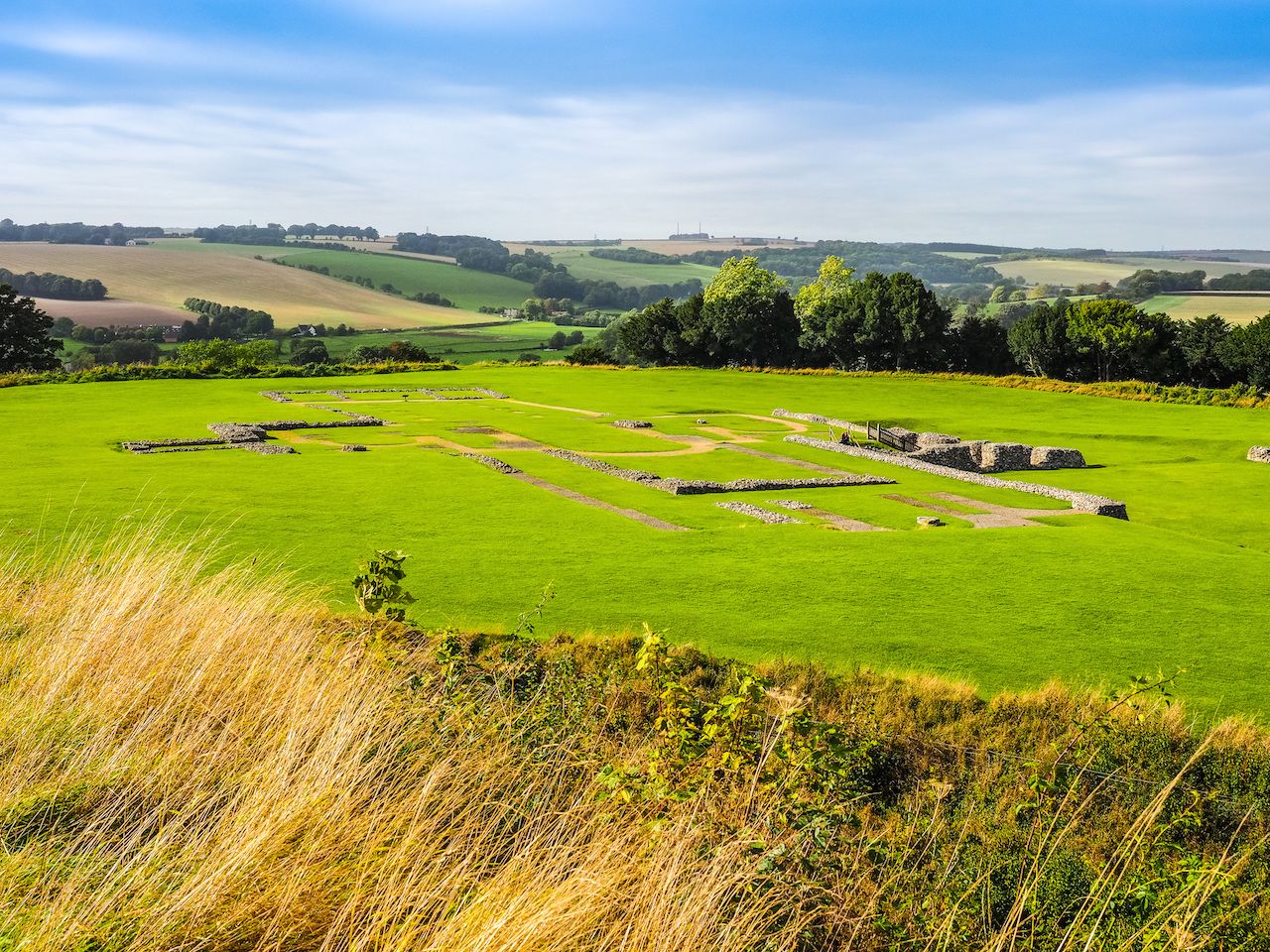 Salisbury was once known as Sarum and was actually located two miles from its current location, originally built around an ancient Iron Age hillfort. It was settled by the Normans who built the first cathedral within its walls in 1020, but with an expanding population, it was decided that the settlement would relocate in the 1200s. To choose the exact location, the bishop got a bow and arrow and shot a deer; where the deer fell marked the foundation of the new city of Salisbury.

While bow hunting on the fringe of town isn’t encouraged these days, you can still visit the ruins of Old Sarum and walk the boundaries of the original settlement. The Iron Age hillfort is easy to spot, with two raised earth banks separated by a massive ditch. You can also visit the remains of a castle built in 1070 by William the Conqueror. The 29 acres of grounds make for a good long walk and an even better picnic — the views across the Wiltshire countryside and the “New Sarum” city skyline are spectacular.

Stroll through medieval streets and an original charter market. 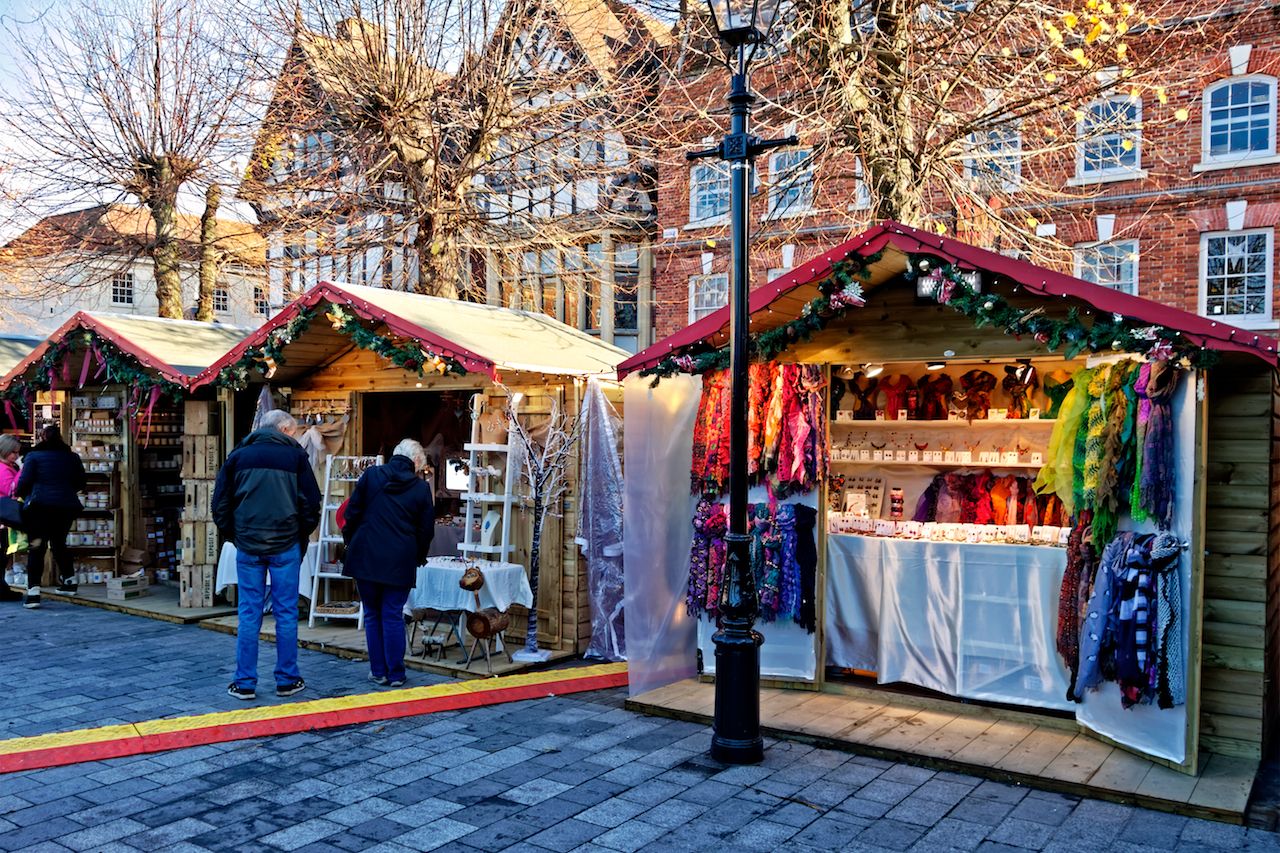 Today, the town center is full of independent shops selling anything from jewelry to crafts, clothing, and household goods. There’s even a candy shop with a fudge-shaped Stonehenge replica, with the added bonus of no random people jumping in front of your photo. With names like Butcher’s Row, echoes of the medieval past live on as you wander the streets of the old city complete with its timbered buildings and 14th-century clocktower. Twice a week in the center of town, you’ll find a charter market — these are similar to normal markets in that they sell fresh regional produce and all manner of items, but they’re unique in that they were started by the issue of a Royal Charter. Charter markets were established in many English towns by royal decree dating back to the Middle Ages. Salisbury’s charter was granted in 1219, making it one of the oldest in England. 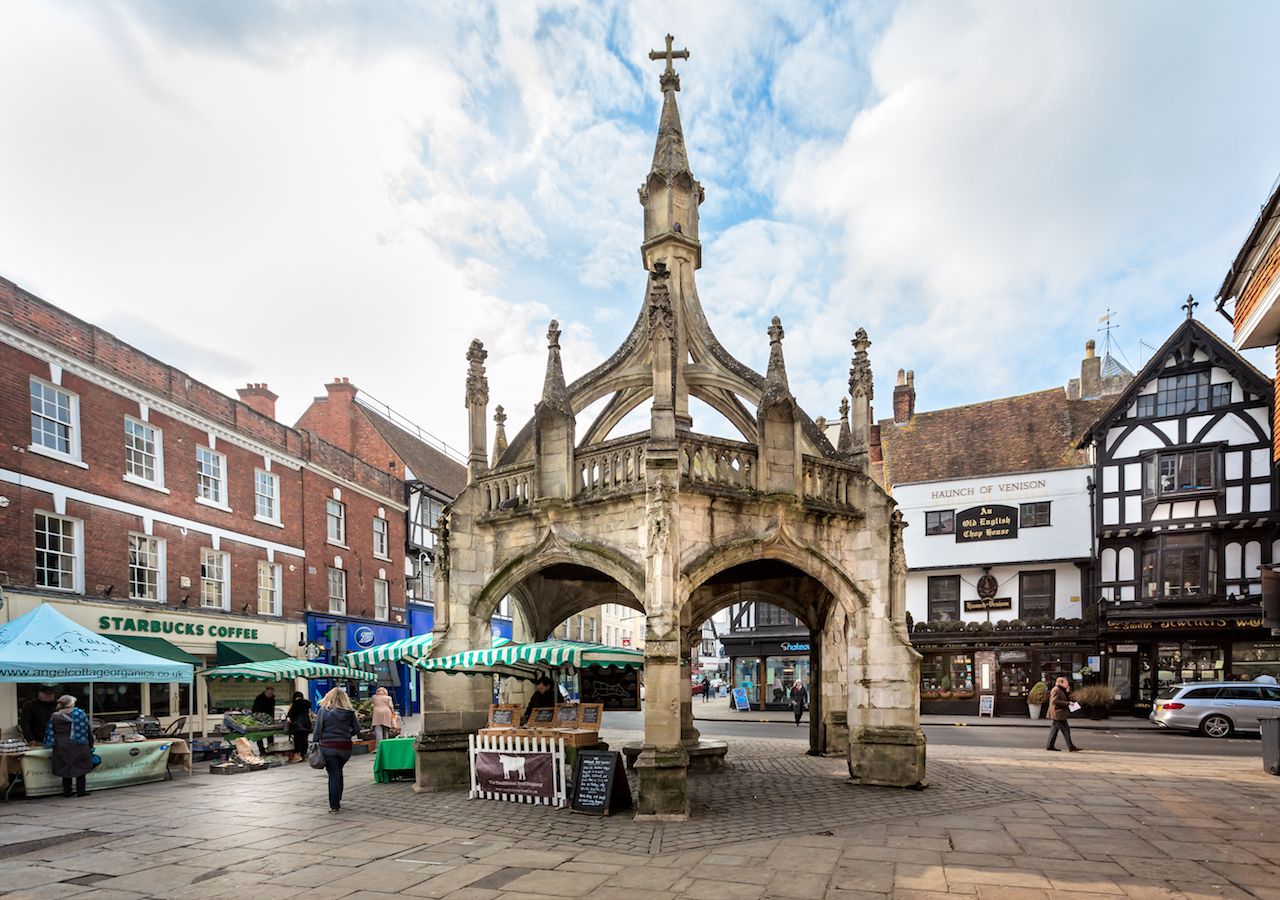 If you fancy a pint after walking through the market, stop by the Haunch of Venison. This is one of the oldest pubs in town, with a heritage dating back 700 years. Its enormous timbers came from old ships, and the pub is full of quirky rooms and spaces with creaking floorboards. Oh, and the beer is pretty good too. 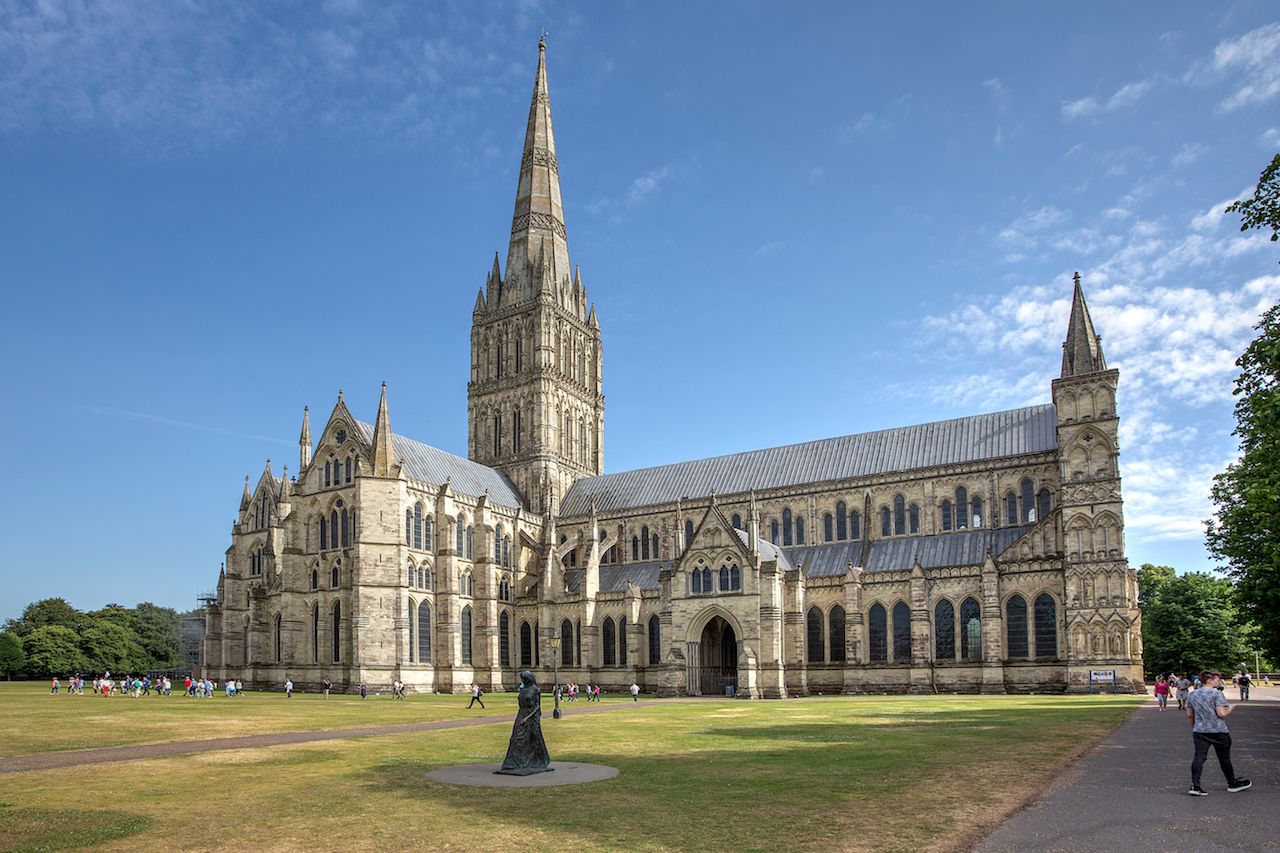 Salisbury Cathedral is the defining landmark of the city, completed in 38 years from 1220 to 1258. It has the tallest spire in England at 404 feet in height. The medieval cloister is stunning to walk around, and the cathedral itself is magnificent even for those who don’t normally frequent churches when they travel. Highlights include the world’s oldest clock and the structure’s beautiful carvings and monuments. The site also hosts regular art exhibitions.

One of the best ways to experience the cathedral is to take a tower tour. This is not for the faint-hearted as it involves a climb of 332 steps, some quite narrow in places, but the experience offers a fascinating insight into the history of the building. These must be booked in advance and include a birds-eye view of the cathedral interior from above and the medieval glasswork, along with the architecture within the roof and views stretching for miles. 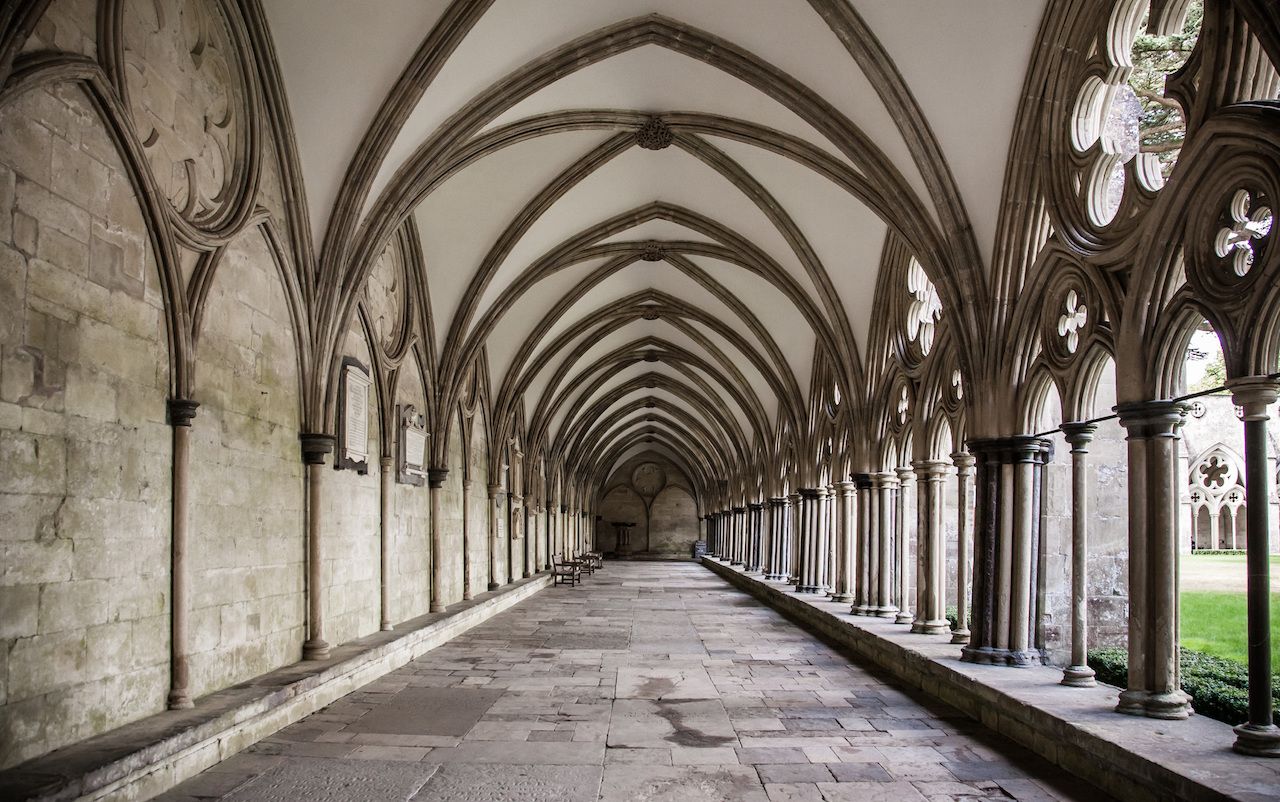 Surrounding the cathedral are the famous water meadows beside the River Avon. Follow the trails here and you’ll see the landscape that inspired the painter John Constable when he visited in 1830. The Cathedral Close is another Salisbury treasure with many historic buildings, and the Salisbury Museum is close by with its collections, including archaeological finds from Old Sarum.

Check out an original copy of the Magna Carta. 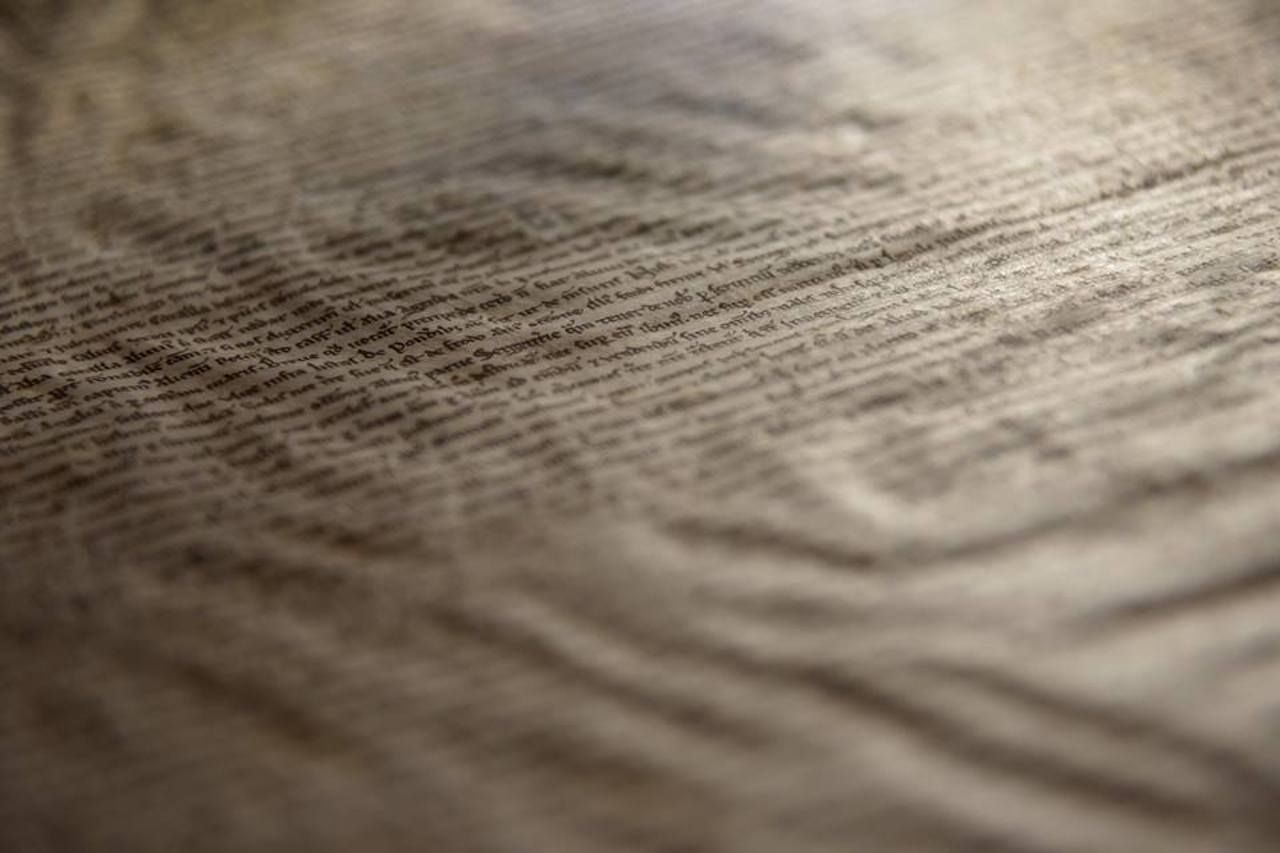 One of the most famous highlights in Salisbury is the Magna Carta, famous as a symbol of justice. The Magna Carta was signed in 1215 by King John at Runnymede as an attempt to stop warring between his barons. The charter was written on parchment and is significant as one of the first formal documents to set out basic rights — including the right to a free trial. Today there are just four original signed copies in the world, and one is in Salisbury. This is displayed within the Chapter House of Salisbury Cathedral and is a must-see for anyone visiting the city.

CultureSkip the Cotswolds — Blackmore Vale Is the Storybook England of Your Dreams
Tagged
Art + Architecture Culture Insider Guides England
What did you think of this story?
Meh
Good
Awesome