Friendly as Californians are, San Francisco isn’t particularly kind to budget travelers. Between hotels that can cost as much per night as a month’s rent in Fort Wayne, Indiana, the most affordable city in the US, and craft-beer lists that seem to reflect dinner-menu prices, a trip to the City by the Bay is almost always a splurge. Much as it is for most who live there.

Whether visiting or scraping by as a resident, it’s comforting to know that not all SF recreation is cost prohibitive. Especially considering one of the city’s most beloved pastimes, urban hiking, doesn’t have to cost you a dime. And now, thanks to the Crosstown Trail, it’s better than ever. Earlier this year, San Francisco unveiled a 17-mile route that runs diagonally across the city, connecting its green spaces between Candlestick Point and Lands End in Golden Gate National Recreation Area. With routes for both walkers and cyclists, the Crosstown Trail can be broken up into five sections to be done all at once or as separate outings.

While you can, and should, visit the website for step-by-step directions and download the OuterSpatial app to track the route in real time, we’ve put together this cheat sheet of highlights, detours worth taking, and where to eat along the way to help you make the most of your trek.

Start backward, moving from the Pacific to the Presidio
Distance: 3.9 miles 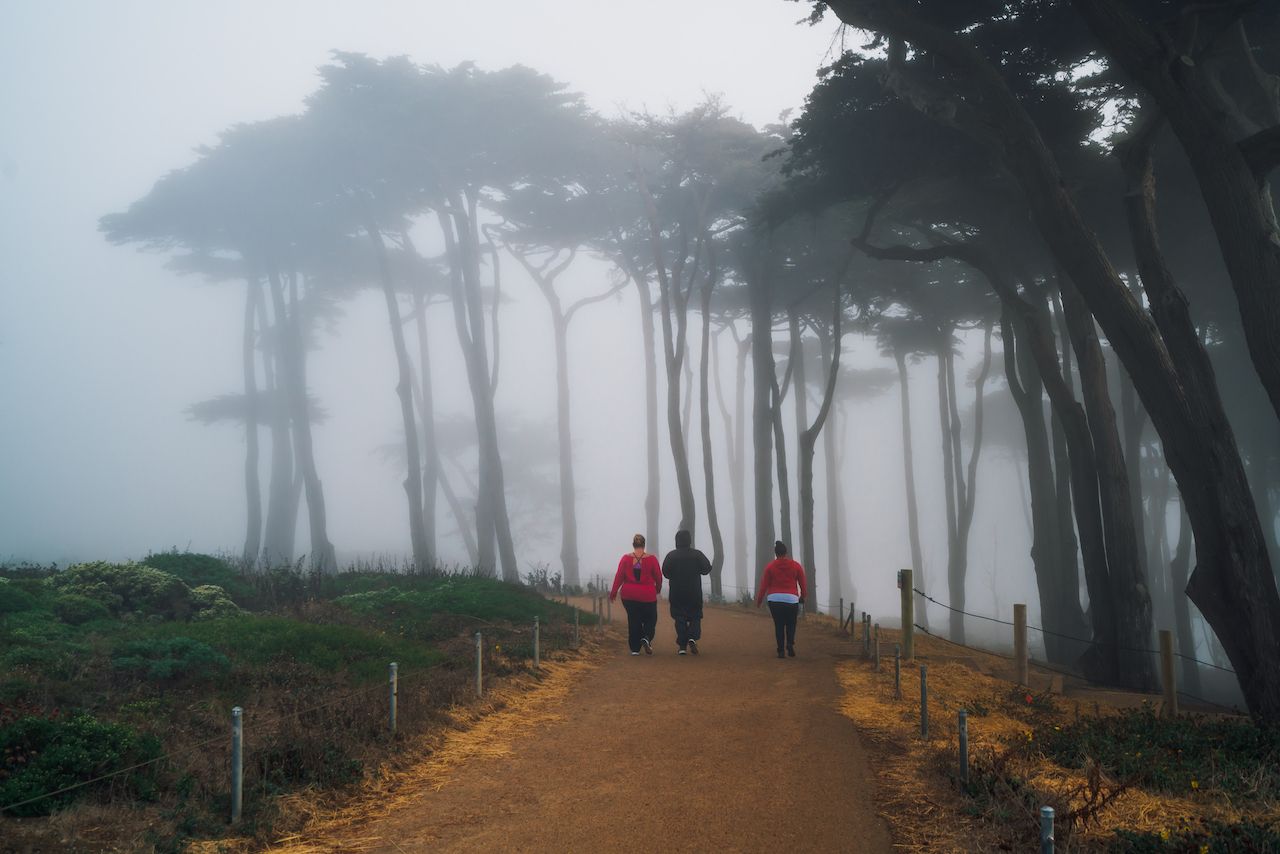 Though the Crosstown Trail technically starts in southeast SF, right on the bay, we recommend kicking things off on the edge of the Pacific Ocean at Lands End. This is the prettier trailhead, and this section incorporates some of the city’s most cherished landmarks. Starting backward guarantees you’ll see the highlights even if you don’t finish the entire route. And, if you were only planning on tackling part of the trail, it’s the obvious choice to prioritize.

From the Lands End Visitor Center, where there’s a cafe to grab a quick bite and fill your water bottle up, take an immediate detour to the Sutro Baths before linking up with the Coastal Trail. A defunct saltwater swimming complex built by long-ago mayor Adolph Sutro, these ruins are fun to explore while admiring the ocean views. They’re also a stone’s throw from the Cliff House restaurant, an iconic spot overlooking Ocean Beach where you should definitely stop for a meal if you decide to do the trail from south to north as it was designed.

Working your way along the Coastal Trail, make time for a second detour to the Lands End Labyrinth, a hidden stone display created by artist Eduardo Aguilera. Here, you can take professional-grade photos of the Golden Gate Bridge and Marin Headlands on the other side. It’s about a mile from the labyrinth to the next trail marker, Eagle’s Point, which borders the residential Seacliff neighborhood where you can gawk at some of the city’s priciest homes.

Tucked away between houses, you’ll find the entrance to Baker Beach, the popular nude beach that famously hosted the first-ever Burning Man. The route skips over China Beach, a sheltered coved nestled between Lands End and Baker Beach, but both are equally scenic with uninterrupted views of the bridge. Take your time wandering up and down the coast and watching the surfers do their thing. When you’re ready to leave, the Lobos Valley Creek Trail will guide you to the Presidio, a military fort turned national park site and important SF destination.

Cut through the Richmond and the city’s biggest park
Distance: 2.3 miles 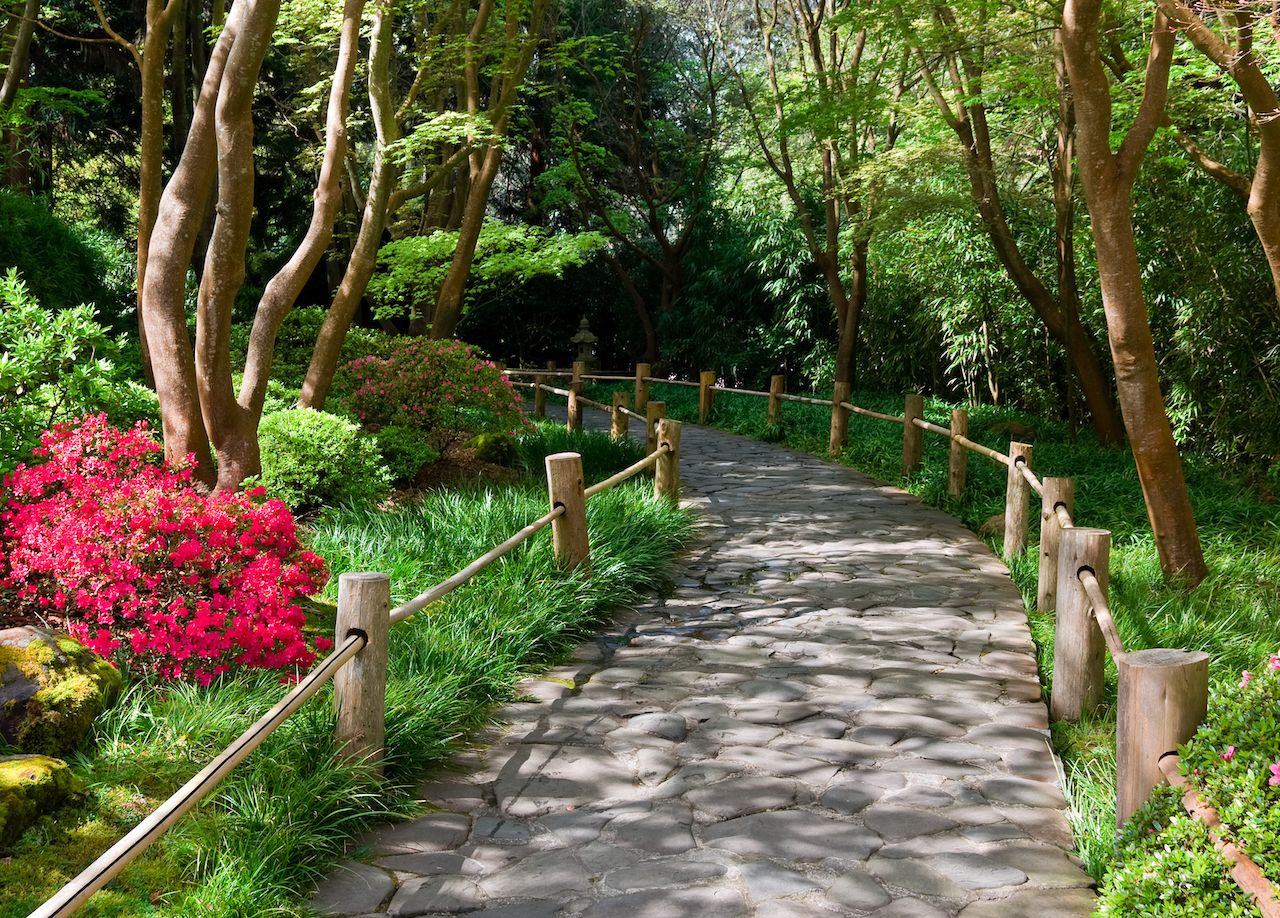 After the first leg of the Crosstown Trail, you’ll be in the heart of the Richmond District, where you can easily refuel at a casual eatery. If you set out before breakfast, stop at the House of Bagels on Geary Boulevard for a mid-morning bite. Once energized, make your way to Golden Gate Park, an expanse of over 1,000 acres that makes NYC’s Central Park feel like a front lawn. Keeping strictly to the trail, you’ll pass through the center of the park by Stow Lake, a charming spot where you’ll see locals boating and paddle boarding by the Chinese Pavilion while walkers and cyclists beeline for Strawberry Hill, an island smack dab in the center of the lake.

If you can, take your time in Golden Gate Park, veering off route to see some of its highlights, which include the Japanese Tea Garden just east of Stow Lake and the San Francisco Botanical Garden farther east. The park also plays host to two of the city’s most famous museums, the de Young for fine arts and the California Academy of Sciences, so it’s easy to turn this section into a general sightseeing tour. (You can check out the de Young’s impressive lobby art, ascend its tower for a 360-degree view, and explore the sculpture garden all for free.) We say go for it if you’re just visiting or feeling a staycation. 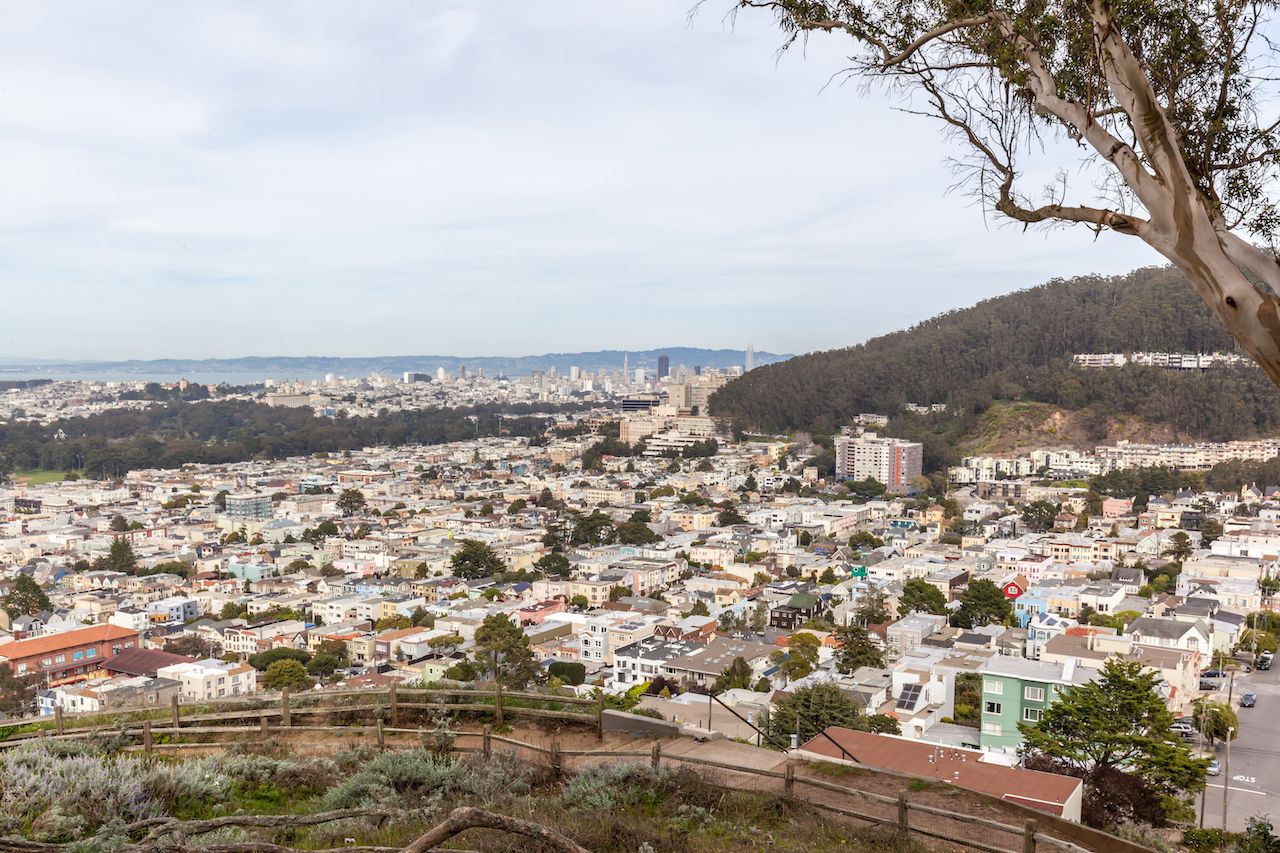 Leaving the park, you’ll enter the Inner Sunset, a busy neighborhood with tons of solid lunch spots if you didn’t stop to eat before. Just across from the park on Irving Street are Chinese staple San Tung, which has some of the best chicken wings in SF and typically a long line of locals willing to testify to that fact, and the Taco Shop at Underdogs for those too hungry to wait. In between, there’s The Corner Spot, a fun dive bar where you can cool off with a beer and maybe even squeeze in a quick game of pool. If you’re willing to stray a bit farther from the trail, try Nopalito for fresh, organic Mexican food, best enjoyed on the outdoor patio.

Back to the task at hand, this second section starts at the corner of Judah Street and 16th Avenue, a block from the Hidden Garden Steps just off Kirkham Street. Here, you’ll climb 148 beautifully tiled steps while admiring the floral, at times psychedelic, pattern only to wind up at a second colorful staircase, the 16th Street Tiled Steps. This 163-stair flight is more well-known, showing off a mosaic design reminiscent of Van Gogh’s Starry Night. Stick around a minute to spot green hairstreak butterflies flitting about, then climb to the top and enter Grandview Park.

Living up to its name, the park offers spectacular vistas of the city and Lake Merced at its summit, where you’ll also see a 140-million-year-old rock formation known as the Franciscan chert. From here, the trail cuts through Rocky Outcrop, a small but pleasant open space that’s easy to navigate despite its lack of designated trails. Continue on past Golden Gate Heights Park, a recreation area that’s not worth stopping at except to see the spineflowers and other plant life that inhabits its dunes, until you hit the Forest Hill Muni Metro Station. 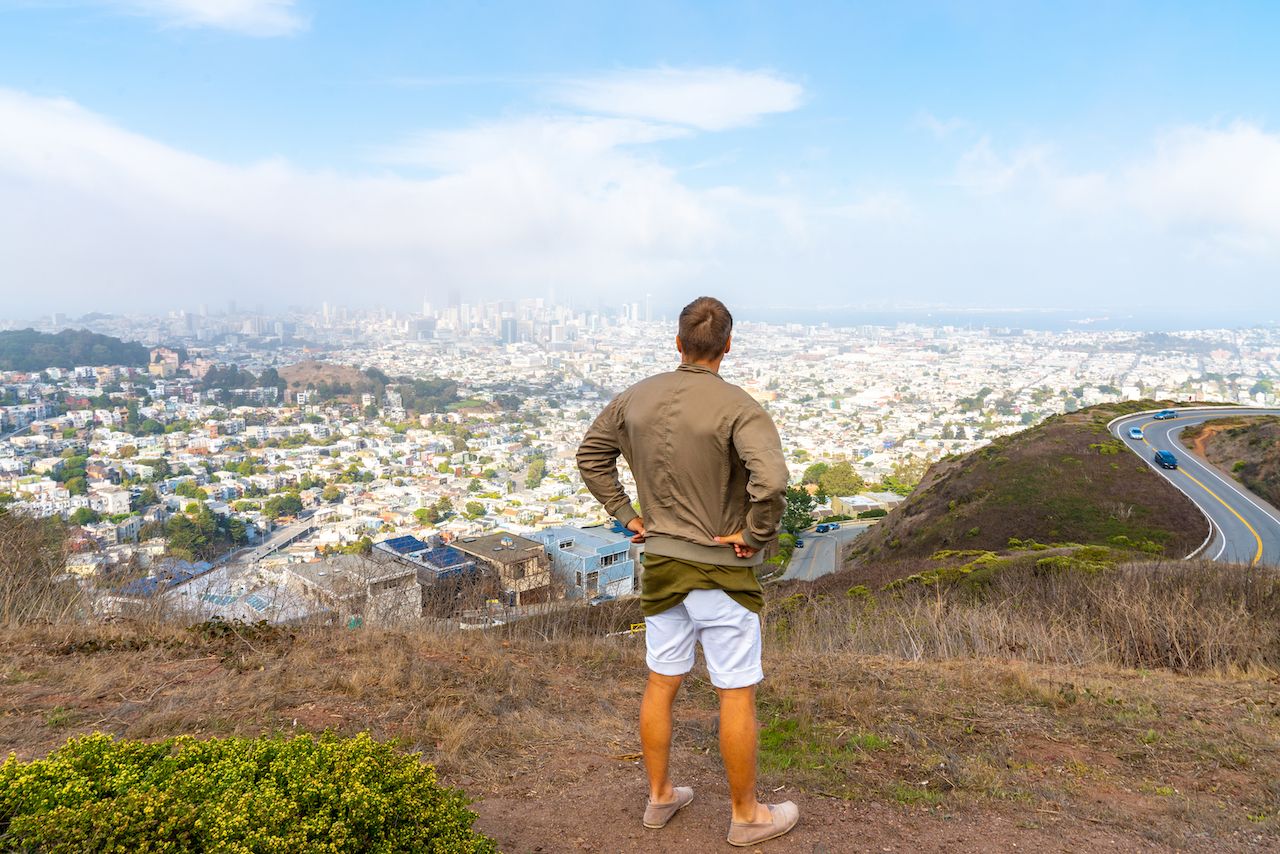 Section four kicks off at Laguna Honda Boulevard, where you’ll take a right at the Laguna Honda Hospital and walk up to a wide open space. There, above the hospital, you’ll find the Virginia Leishman Farm, where you can mingle with goats, pigs, and sheep while getting an eyeful of the Sutro Tower, a broadcasting tower and defining SF landmark.

The next trail highlight is Glen Park Canyon, a 60-acre greenway that takes up a significant chunk of this section. On either side of the designated trail, there are two open spaces worth a detour: Twin Peaks, a pair of tall hills that rise above a residential neighborhood and open to incredible views of the entire Bay Area, and Mount Davidson, the highest peak in SF at 927 feet tall. Mount Davidson is about 20 minutes out of the way on foot, but it’s worth seeing, even if that means hopping in a car or bus to make time for the outing.

At Glen Park Canyon, walkers will follow the Islais Creek and Gum Tree Girls trails while cyclists will ride down O’Shaughnessy Boulevard. As you go, admire green hills and creeks, wildflowers and rock formations, and a variety of wildlife taking refuge from the urban development. If you still haven’t eaten, hit up the deli and bakery at nearby Canyon Market for a better meal than you’d expect a grocery store to supply. If, on the other hand, it’s the promise of a cold brew that’s kept you trekking, take a 15-minute detour to St. Mary’s Pub, a local dive where you can play pool and pinball, or fill up on popcorn if you’re feeling peckish. 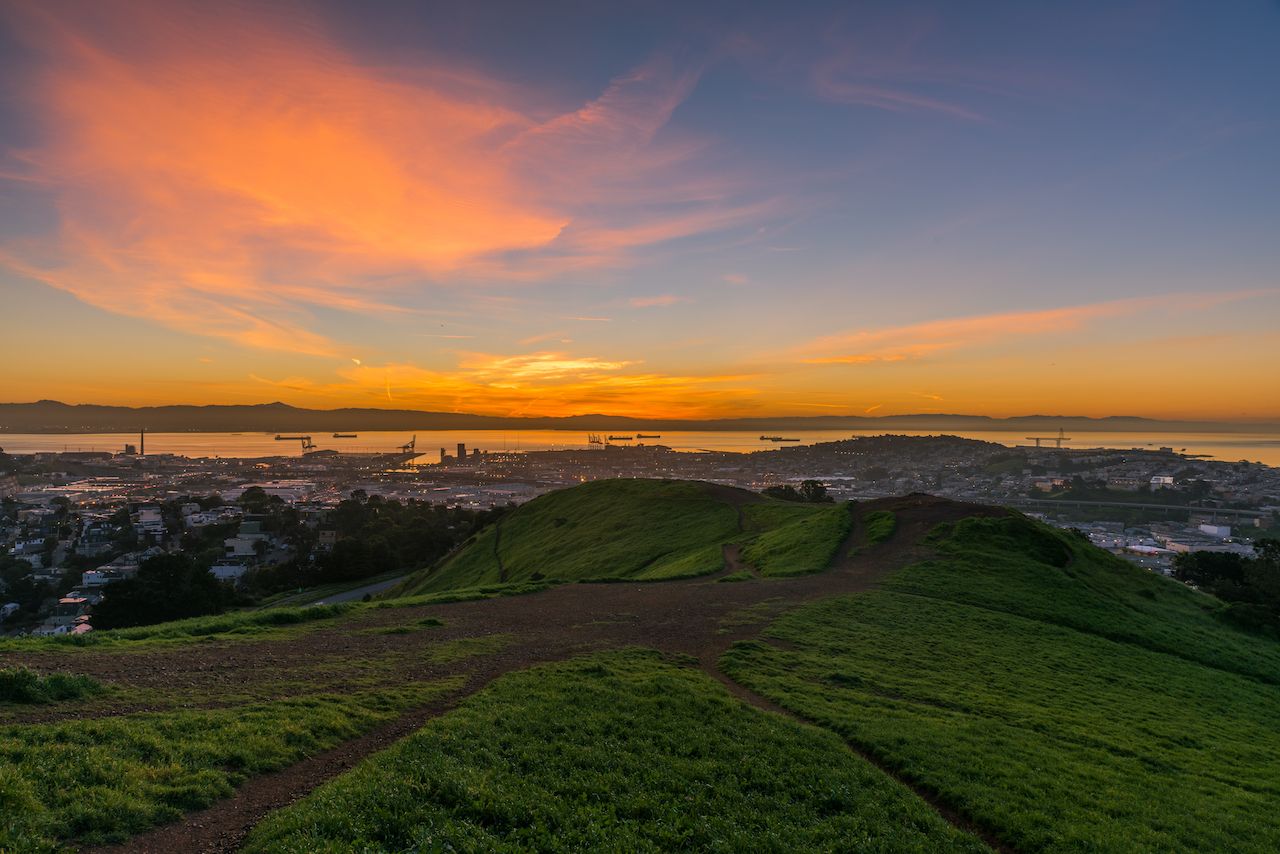 For locals, this last leg, or first if you’re a traditionalist, might just be the favorite — as it’s a part of the city most have neglected to visit ever since the Giants’ ballpark moved in 2000. The first stop you’ll want to spend a little extra time on is Alemany Farm, the largest urban farm in SF, where volunteers can sign up to help in exchange for heaps of fresh produce.

Next up is John McLaren Park, second in size only to Golden Gate Park at an impressive 300-plus acres. Walk down Philosopher’s Way toward the Jerry Garcia Amphitheater, named for the Grateful Dead lead guitarist who once lived nearby. The open-air, Greek-style concert venue hosts music and art festivals throughout the year, which is worth noting if you’ll be in town awhile. When it isn’t filled with concertgoers, this park is ideal for birdwatching and traversing more than seven miles of trails. Another highlight is McNab Lake, a nice spot to enjoy a picnic with the snacks you stocked up on at Canyon Market.

Heading back into a more urban area, you’ll cross through Visitacion Valley — home to its own modest greenway with parks, flower and herb gardens, and sculptures — before crossing through Little Hollywood, a quaint family neighborhood with a misleading moniker. This stretch is a pleasant walk but more of a means to an end, which in this case is Sunrise Point in the Candlestick Point State Recreation Area.

Here, you’ll find campgrounds with all the facilities you might need after a long day, as well as unparalleled views of the SF Bay and the East Bay opposite the city. It’ll feel rougher around the edges than Golden Gate or John McLaren Park, but that’s part of what makes Candlestick Point so special, a little-visited part of a city that often feels overwhelmed with people. If you have the energy, spend the rest of the afternoon fishing, windsurfing, birdwatching, and sea lion spotting — or maybe even organize a BBQ to celebrate finishing the Crosstown Trail.