In 2019, the Kingdom of Saudi Arabia officially opened its doors to international travelers, issuing tourist visas to nationals of 49 countries for the first time in history. Previously, only those traveling to Saudi Arabia for work or Muslim pilgrims were permitted to enter the country. Now, citizens of the United States, Canada, Australia, New Zealand, Japan, China, many European nations, and more can obtain an e-visa to travel to Saudi Arabia.

How to get a visa to visit Saudi Arabia

The e-visa application process can be completed in a matter of minutes online. Tourist visas will cost eligible travelers about 125 USD, including an 80 USD base fee, a 40 USD mandatory health insurance fee, and additional smaller fees for taxes and payment processing. Once obtained, the visa is good for one year from the date of inssuance, allowing multiple entries and up to three months of travel in Saudi Arabia.

It’s possible for nationals from outside the 49 eligible countries to get a tourist visa as well, though they’ll need to apply in person at a Saudi consulate and provide additional information like proof of a round-trip ticket, accommodation while in Saudi Arabia, proof of employment, and a bank statement to prove financial stability.

No matter their country of origin, non-Muslim travelers are still prohibited from entering Mecca and Medina.

Although the two holiest cities in Islam are off limits to non-pilgrims, Saudi Arabia is filled with landscapes and landmarks that any traveler would be lucky to see in person — and many now can. Here are nine of the best.

The best places to see for travelers to Saudi Arabia

1. Edge of the World — outside Riyadh 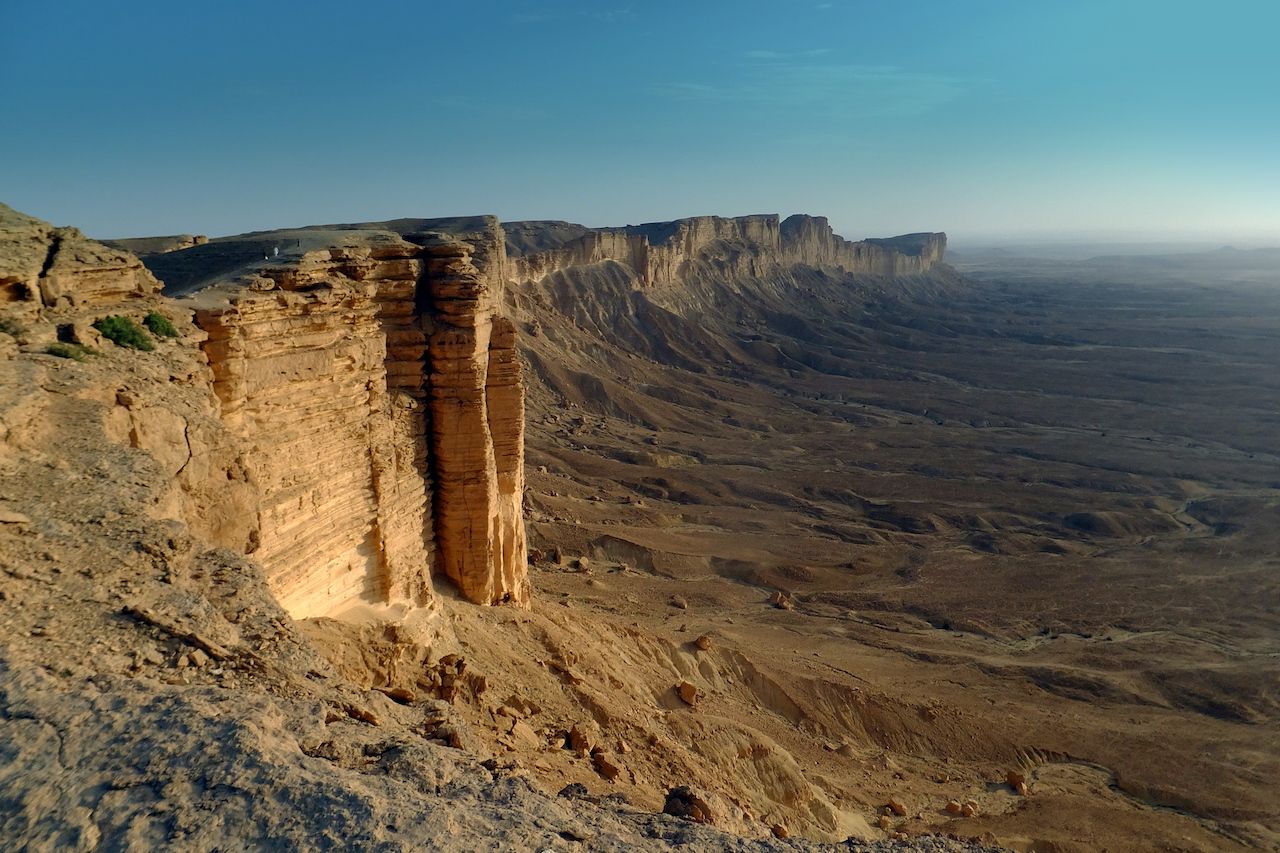 Approximately 60 miles north of Riyadh lies the stunning Edge of the World rock formation and its spectacular views. Budget two hours for the drive there, two hours to hike to the actual rock formation site, and then another two hours to return to Riyadh. A lot of walking and hiking is required, so be sure to bring plenty of water, sunscreen, and ample gear to stay cool in the sun. Additionally, know that a ranger shuts the gate to the Acacia Valley at the end of the day, so unless you want to be stuck in the valley overnight, you’ll want to make your way out by closing time. Private tours can also be arranged by travel agencies. 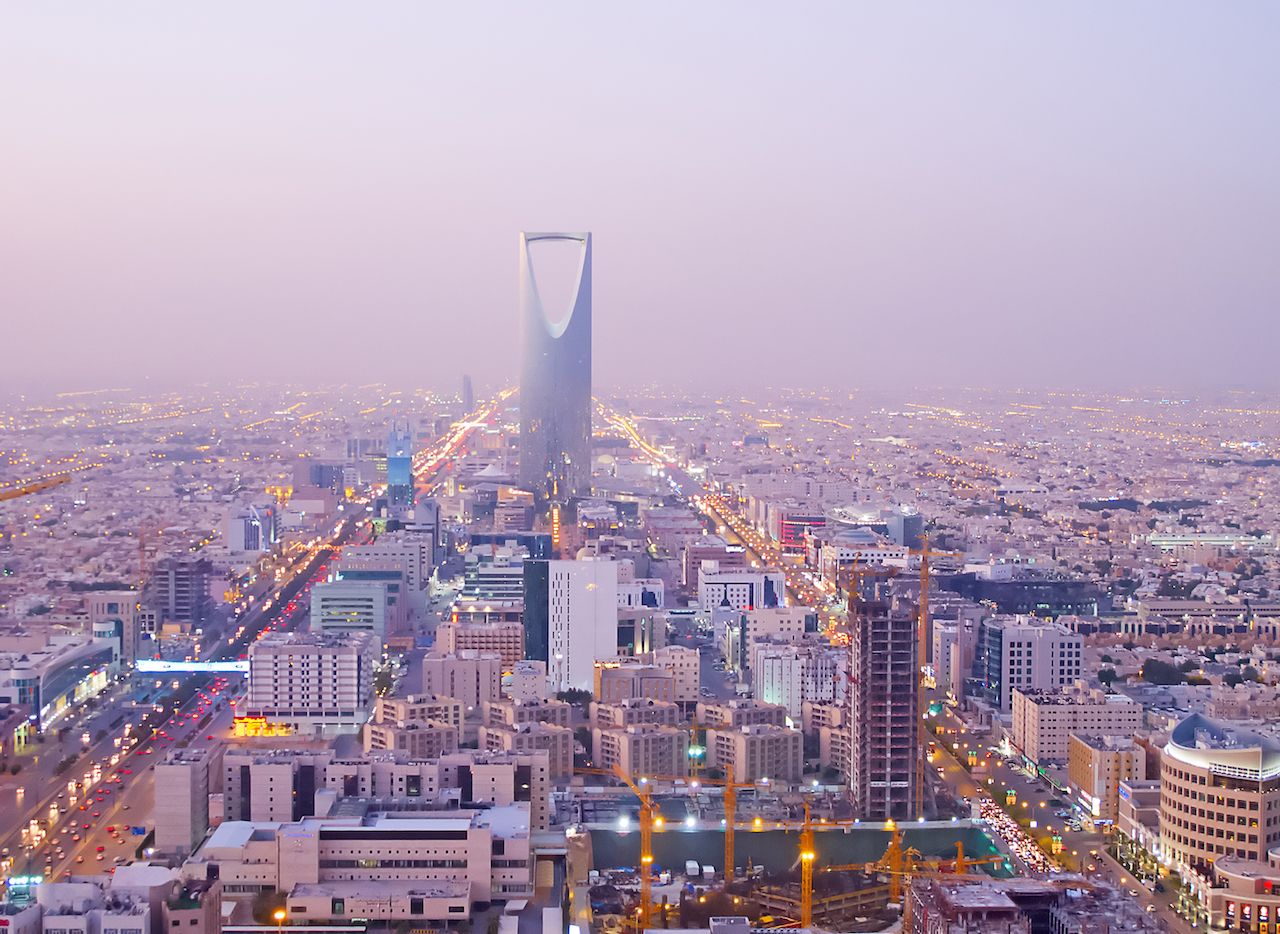 If there is one building that distinguishes Riyadh’s skylines from other cities around the world, it’s the Kingdom Center Tower — the one with the semi-circle-shaped hole near the top. The Sky Bridge, open daily from 9:30 AM to 11 PM and on Fridays from 4:30 PM to 11 PM, is the tippy-top of the tower looking down on the desert capital. For about $18, you’ll speed up two elevators to the top of Riyadh’s most famous landmark. For the best views of the entire city, go a little before sunset to catch daytime colors and night lights. The first three floors of the building consist of a shopping mall. You can find the entrance to the Sky Bridge on the second floor.

The Al-Ahsa Oasis is one of the largest desert oases in the world, thanks to its millions of date palms. The grounds include gardens, archaeological sites, old fortresses, canals, mosques, and other ruins from the Neolithic period to the present. The diversity of rock formations and water systems is complemented by the oldest port in the world, Al-Uqair, and the breathtaking Al-Shu’ba Mountain. The Al-Ahsa Oasis was designated a UNESCO World Heritage site in 2018. 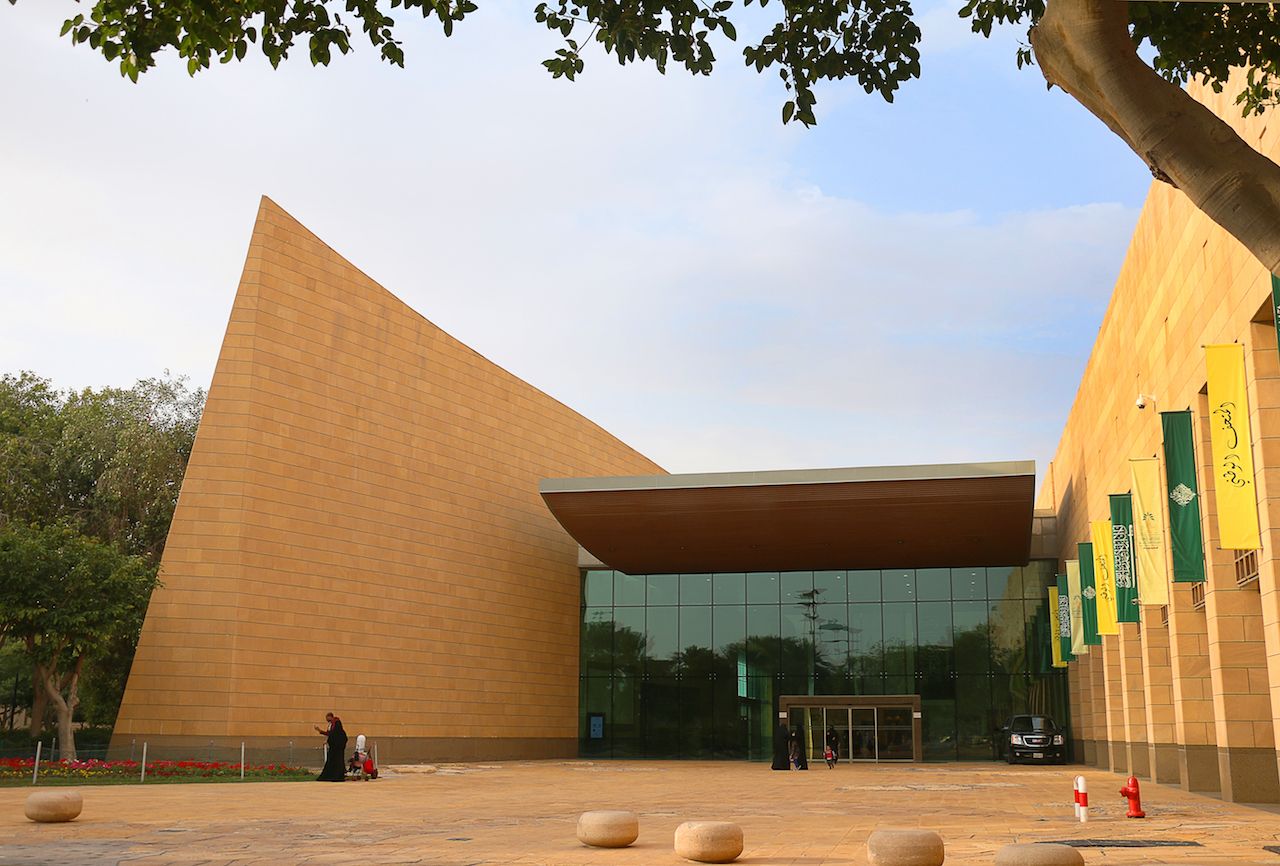 Easily the most renowned museum in the Kingdom, the National Museum is ideal for a rainy day or anytime you are looking to escape the dry heat if you’re visiting outside of winter. Displays and installations incorporate the latest technology, and all descriptions are presented in both Arabic and English. Exhibitions revolve around the Arabian Kingdoms, including the pre-Islamic era, The Hajj, the Two Holy Mosques, the Unification of Saudi Arabia, etc. You’ll be hard-pressed to find a better collection of Saudi artifacts anywhere else. 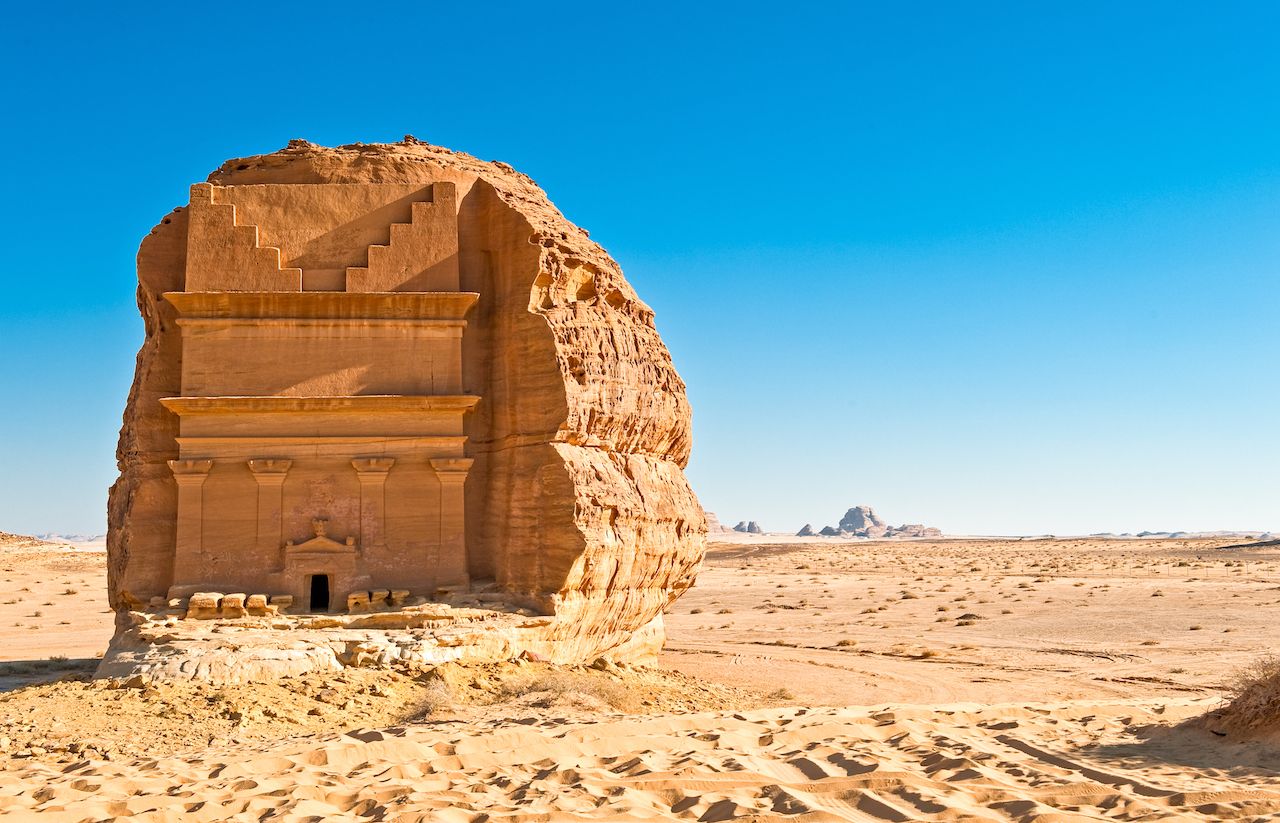 Often referred to as the “Petra of Saudi Arabia,” Mada’in Saleh is a 2,000-year-old site comprised of monuments carved in sandstone rocks. Amazing old forts, ruins, and tombs speckle this area of the Arabian Desert. This archaeological wonder and desert city has been designated a UNESCO World Heritage site and for this reason has been attracting an increasing number of visitors, with even more as KSA’s tourist visa system opens up. 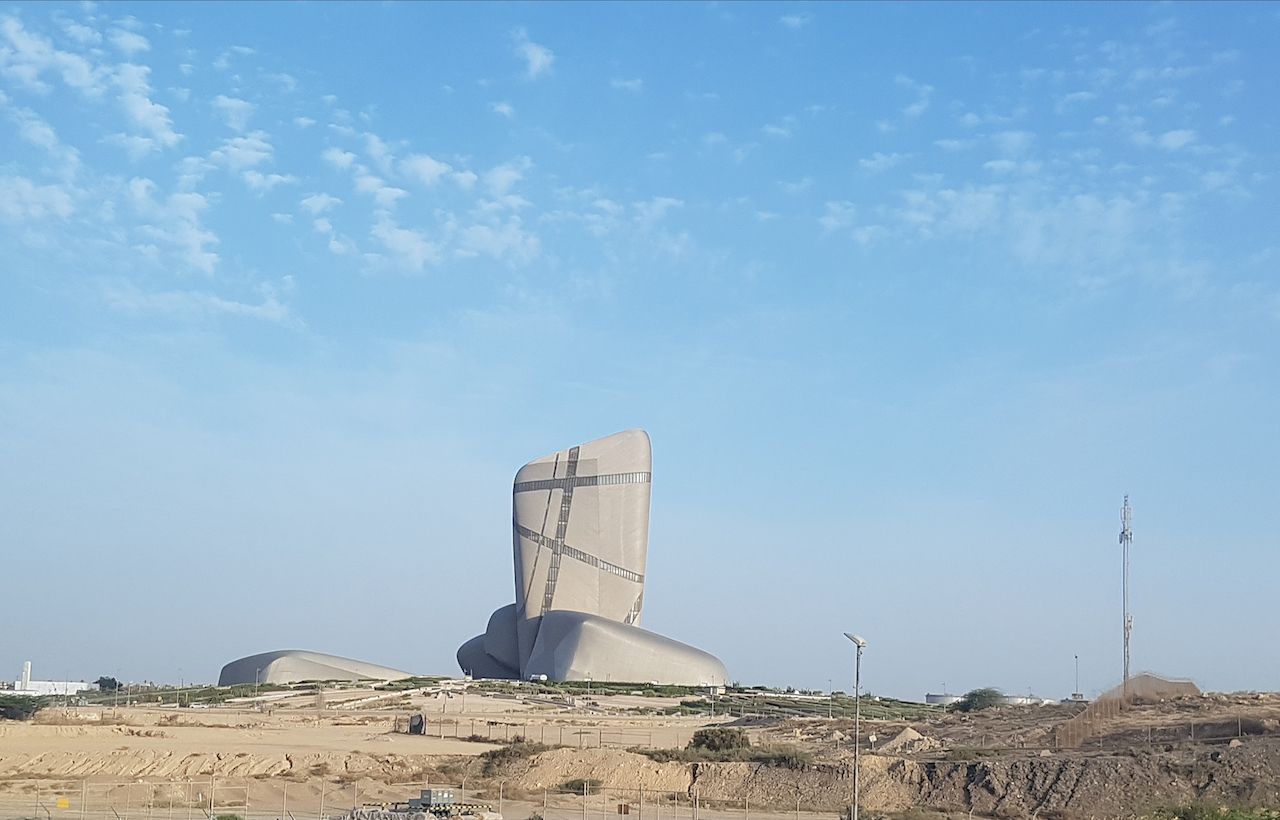 Located next to the larger city of Dammam, Dharan accommodates a world-class center of culture. Saudi Aramco, the country’s massive oil company, runs the King Abdulaziz Center for World Culture, which was completed in 2016 and subsequently made Time Magazine’s list of the World’s 100 Greatest Places in 2018. The center, designed by Norwegian architectural firm Snohetta, holds a library of some 200,000 books, an auditorium, beautiful exhibitions, a museum, and movie theater. 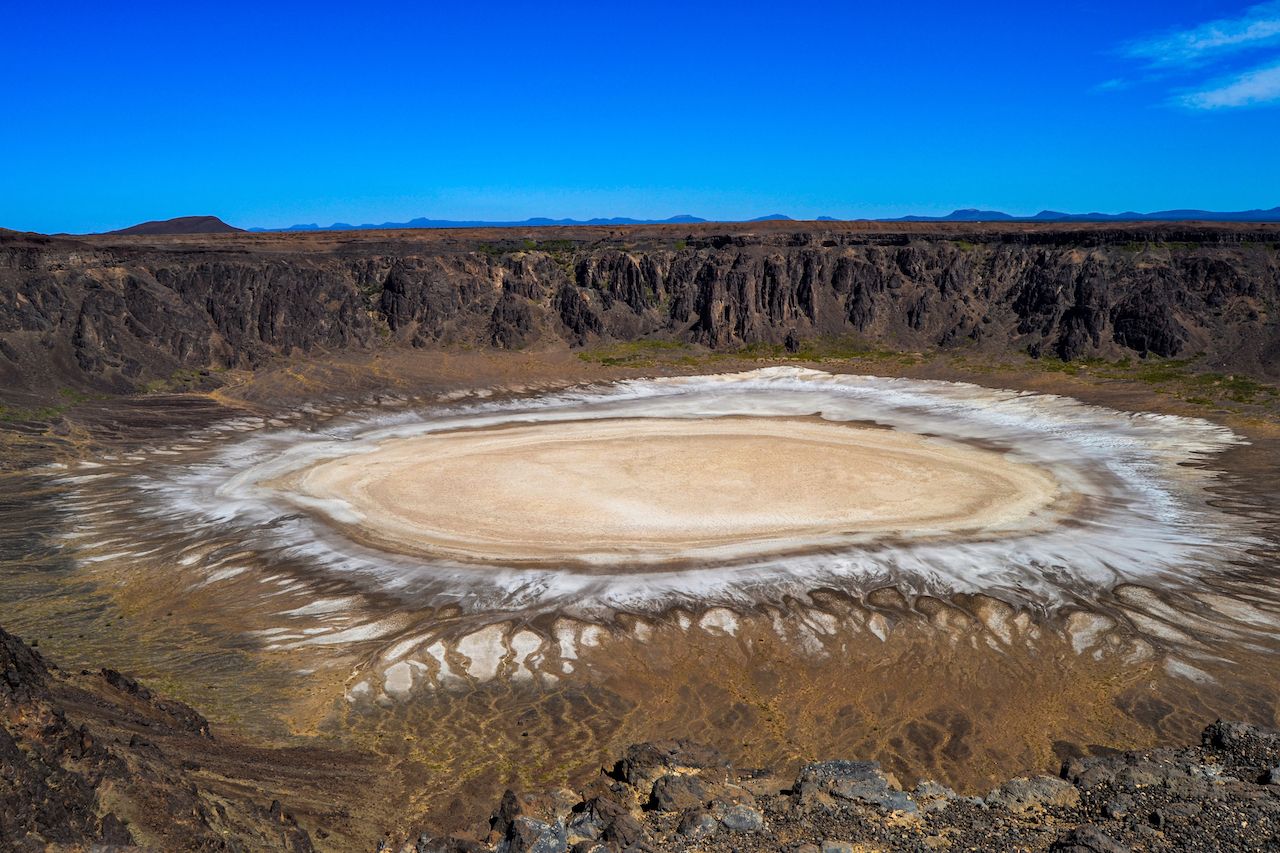 One of the largest volcanic craters on Earth, Al Wahba also features a large salt field near its center that you can hike to. Contrary to the surrounding desert landscape, the crater is home to shrubbery and other plants. Al Wahba is an incredibly unique site to visit, hike around, and even camp at, especially with the recent construction of more roads and access points. Despite these recent developments, ensure that you take proper gear like extra water, hiking boots, and sun protection to withstand the elements. It should take you around 45-60 minutes to reach the bottom of the crater, and due to the crater’s slippery surface, going back up may take even longer. 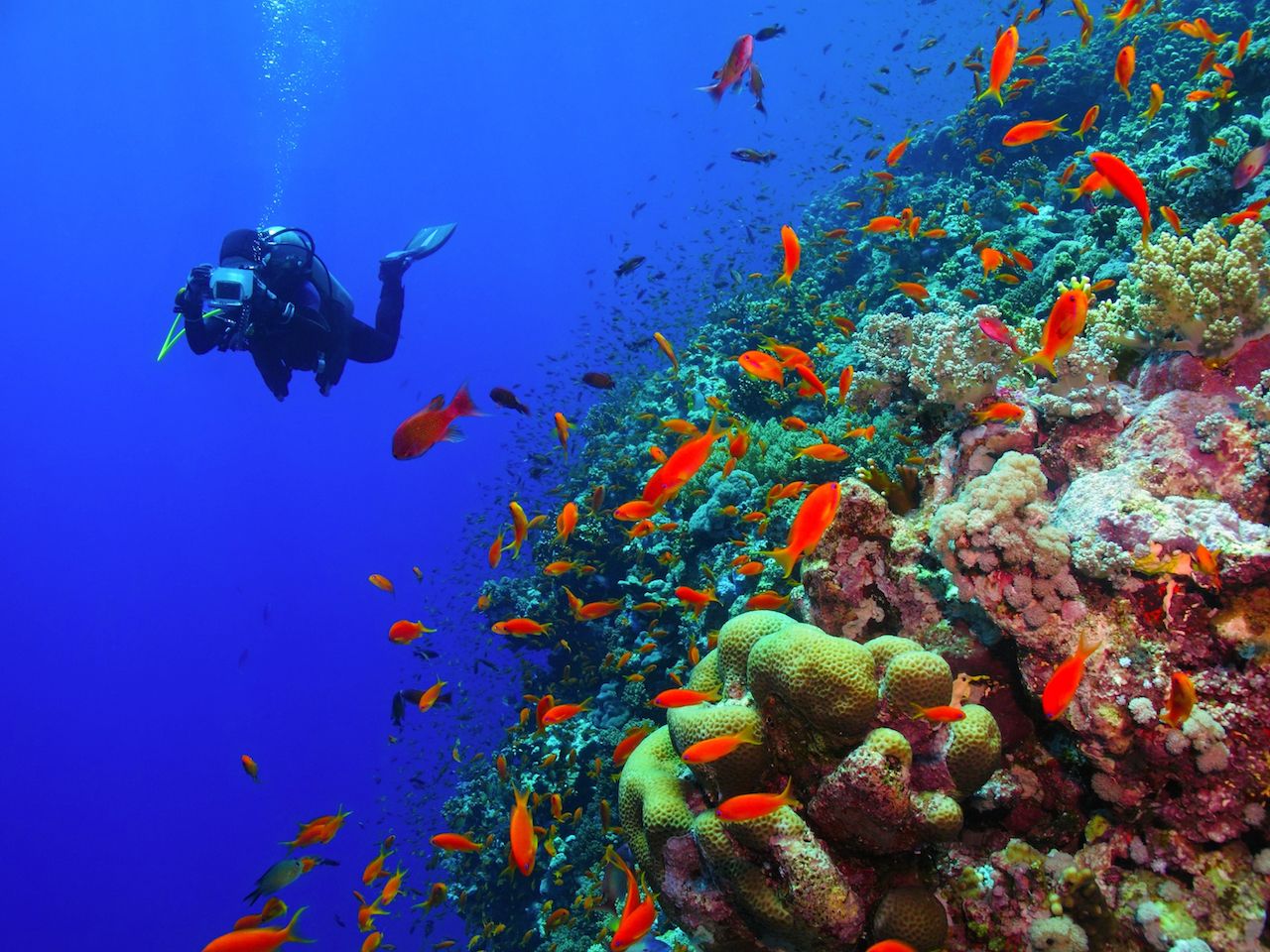 Saudi Arabia is home to the longest coastline of the Red Sea and is famous for its colorful coral reefs, World War II shipwrecks, and biodiversity. Although year-round diving is possible, the best time of year to go is November to January when visibility is better and there’s an increased likelihood of seeing sharks and dolphins. Many scuba agencies and dive shops offer certification and tours with tons based out of Jeddah. 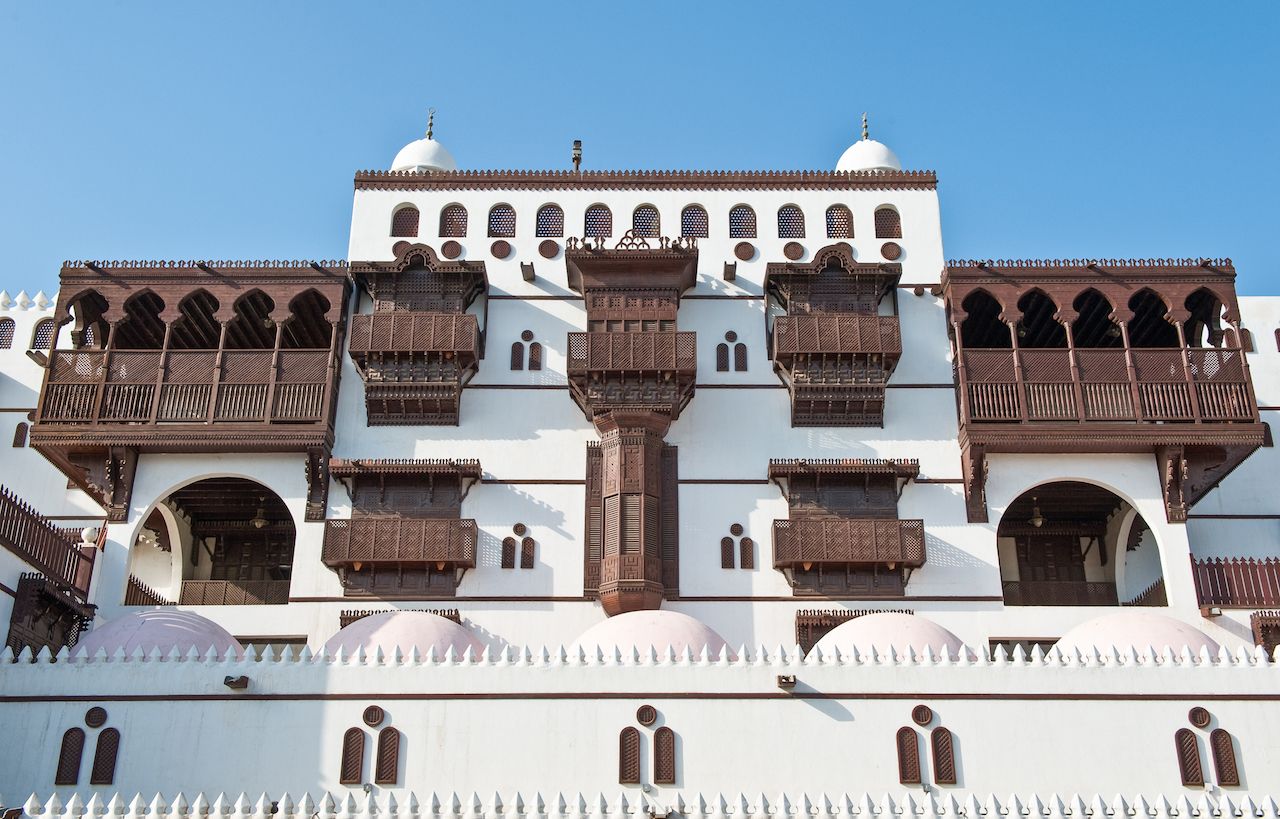 This impressive, sprawling complex with ornate minarets, Moorish wood carvings, and winding passageways is a must-see when in Saudi Arabia. Inside the gates, visitors can find the Abdul Raouf Khalil Museum of Jeddah detailing the city’s history. Small shops and kiosks sell crafts and souvenirs, and you can try some of the local cuisine as you wander outside. Check the Al-Tayebat website (use Google translate as the site is only in Arabic) before you go as there are specific opening hours for single men and families (including single women), and these may vary with the weather. While in Jeddah, check out the beautiful traditional buildings of the UNESCO-listed old town.

NewsWatch: YouTuber Finishes 197-Country World Tour in Saudi Arabia, and It’s Nothing Like You Imagine
Tagged
Travel Saudi Arabia
What did you think of this story?
Meh
Good
Awesome

Watch: YouTuber Finishes 197-Country World Tour in Saudi Arabia, and It's Nothing Like You Imagine

5 Places To Escape the Compound in Riyadh