When the tide goes out twice daily in the Bay of Fundy, it goes out far. As the ocean funnels into, then back out, of the bay between the Atlantic Canadian provinces of Nova Scotia and New Brunswick, it rises, then drops some 50 feet, making it the world’s largest tidal range. That gives Bay of Fundy Adventures a six hour window to host Savour the Sea Caves: An Ocean Floor Culinary Adventure, a dining experience hosted at caves carved into red cliffs by monumental tidal forces.

In the days leading up to our arrival, the Bay of Fundy Adventures team lowers over the cliff the equipment required to pull off this daring dinner. On the high tide preceding the dinner, they land food and drink by boat.

The experience, which is only offered one or twice per year, is open to groups of 24 people. I grabbed one of the last tickets, and followed instructions to gather at the tiny village of St. Martins about 45 minutes from the coastal city of Saint John and three hours north of Maine. The tide goes so far out around this time that the gravelly ocean bottom stretches between the parking lot and the water. With the tide so far out, we had enough time to complete our four-hour dining experience. The congenial group chatted as we waited to be led down into the caves and begin our adventure.

Here’s what it’s like to dine on the ocean floor where the world’s highest tides ebb and flow.

What to expect during the Savour the Sea Caves dining experience

On the trek to the dining room sea cave, the guides take their time, stopping to educate guests about the history of the Bay of Fundy. As we walk and pause, walk and pause, that old saying, “It’s not the destination, it’s the journey,” comes to mind. 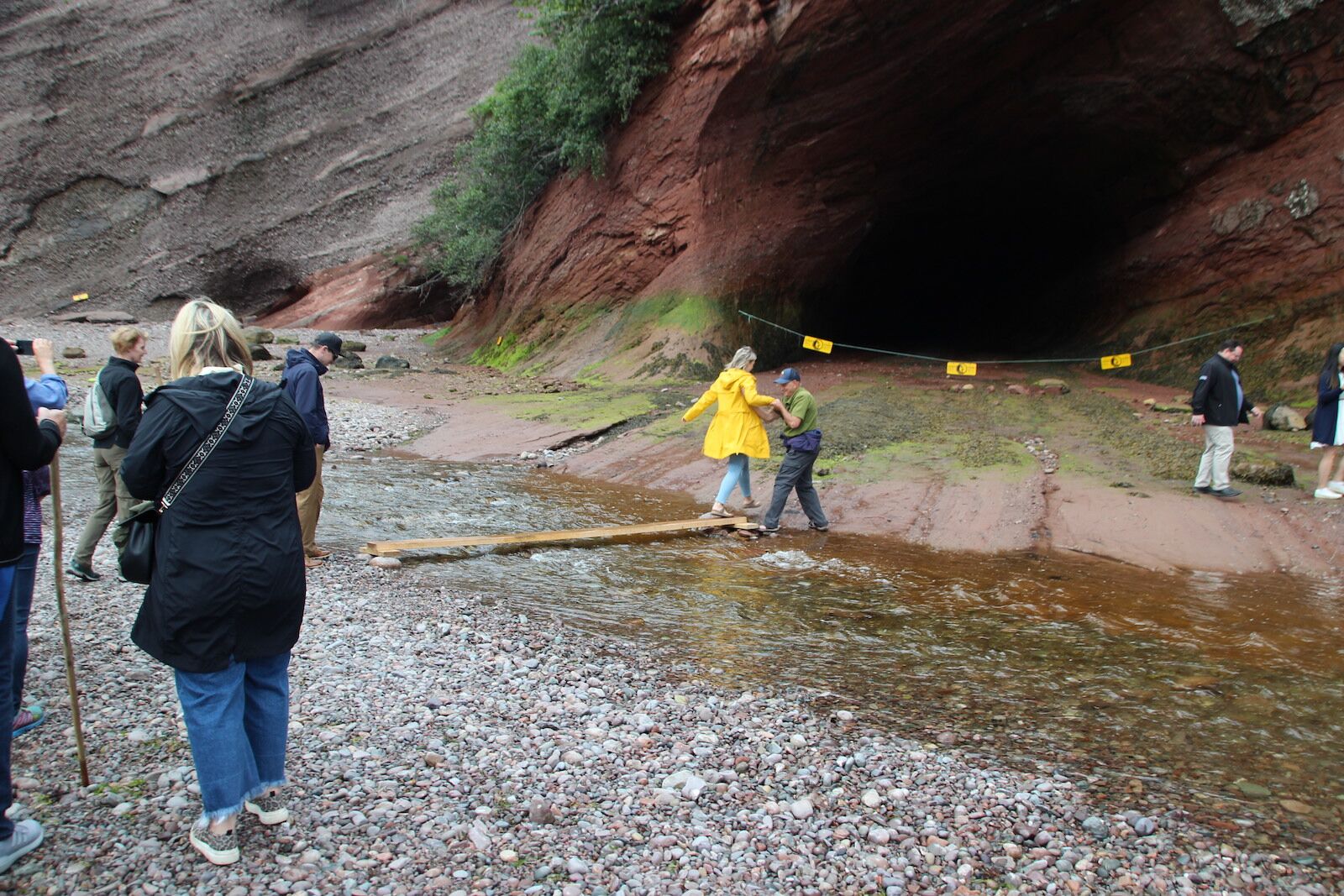 Walking a couple planks across a small stream is the first of many small obstacles diners confront on their way to the sea cave dining room, but it just made the walk more of an adventure. The worst outcome here would be a wet foot. Photo: Darcy Rhyno

Bay of Fundy Adventures guide, Joe Brennan talks science, telling us how these extreme tides happen. The motion of water sloshing back and forth is called a seiche. That’s what happens twice daily as a billion tons of ocean (more than the flow of all the world’s rivers combined) rocks in and out of the bay.

We stopped at the mouth of a shallow cave to snack on appetizers. A natural stone lintel (a beam that typically spans the opening of a fireplace or window) the size of a bus makes this cave a bit too dangerous to enter. 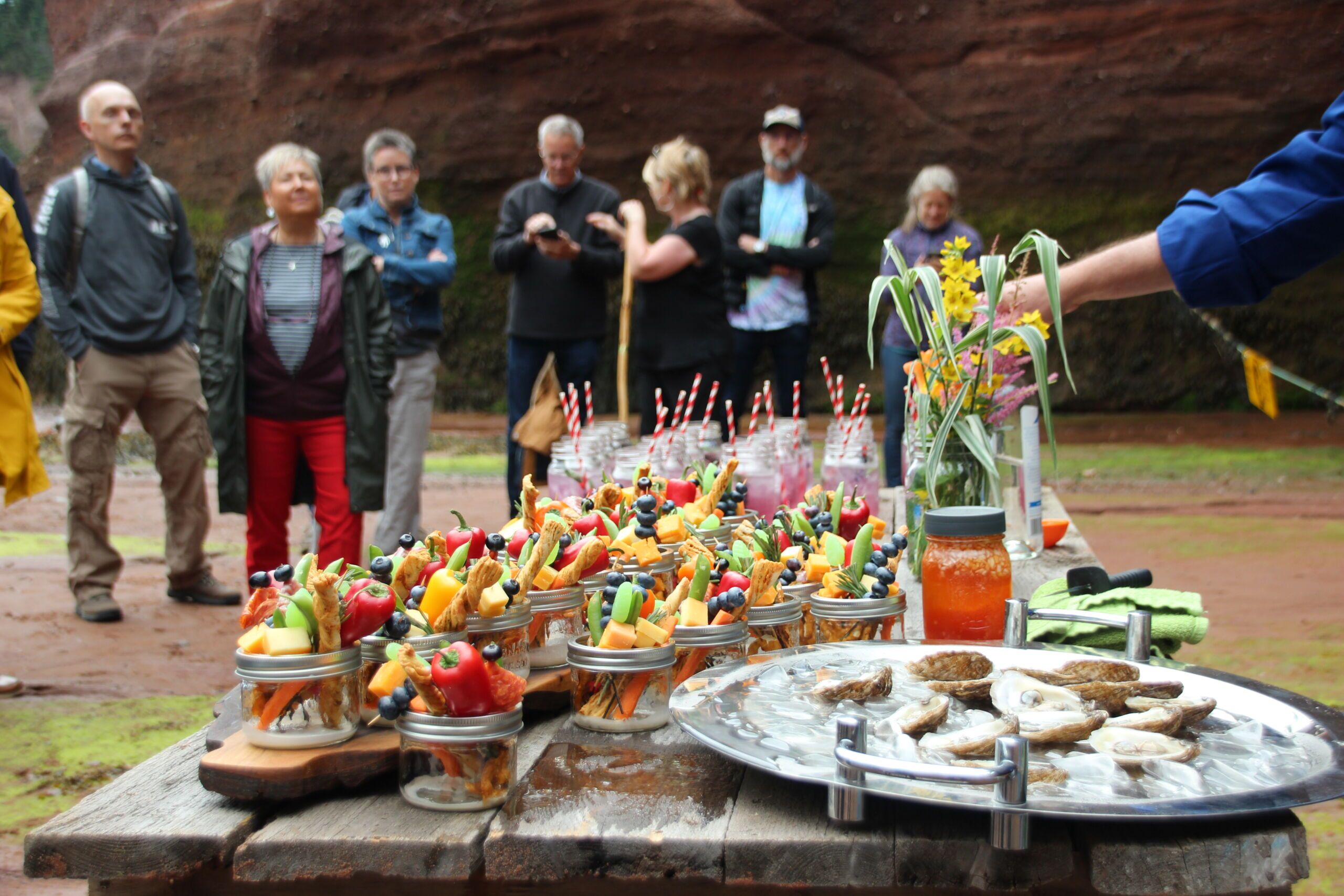 The table of appetizers and drinks is a colorful contrast to the chocolate and coffee shades of the stone walls around us. I grabbed a mason jar of fruit and veg bites—blueberry kabobs, sweet peppers, snap peas, melon, prosciutto, cheese and breadsticks. Photo: Darcy Rhyno 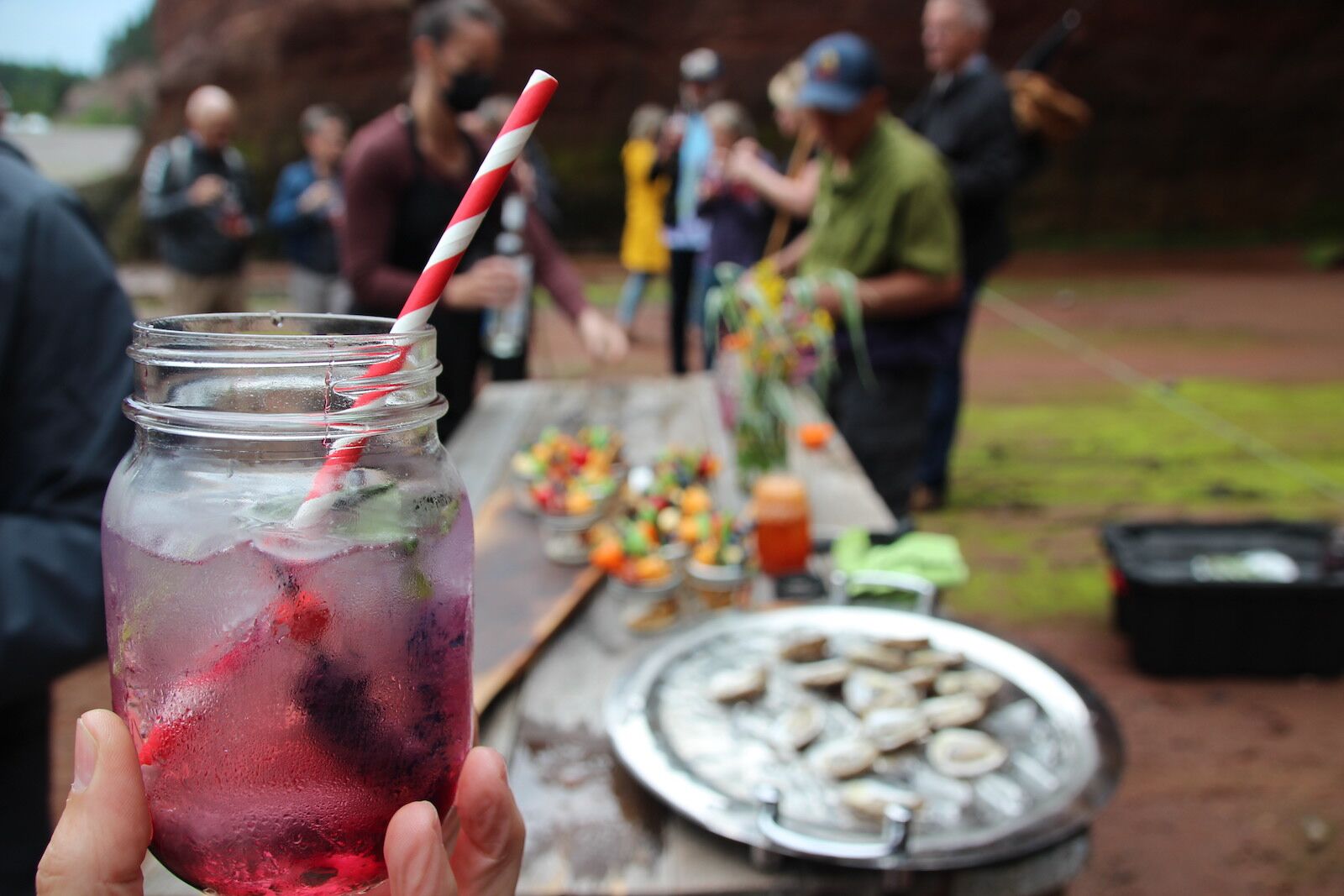 This pink drink is called a Fundy Fizz, the first of many beverages the chef has paired with foods from one end of the Savour the Sea Caves experience to the other. Photo: Darcy Rhyno 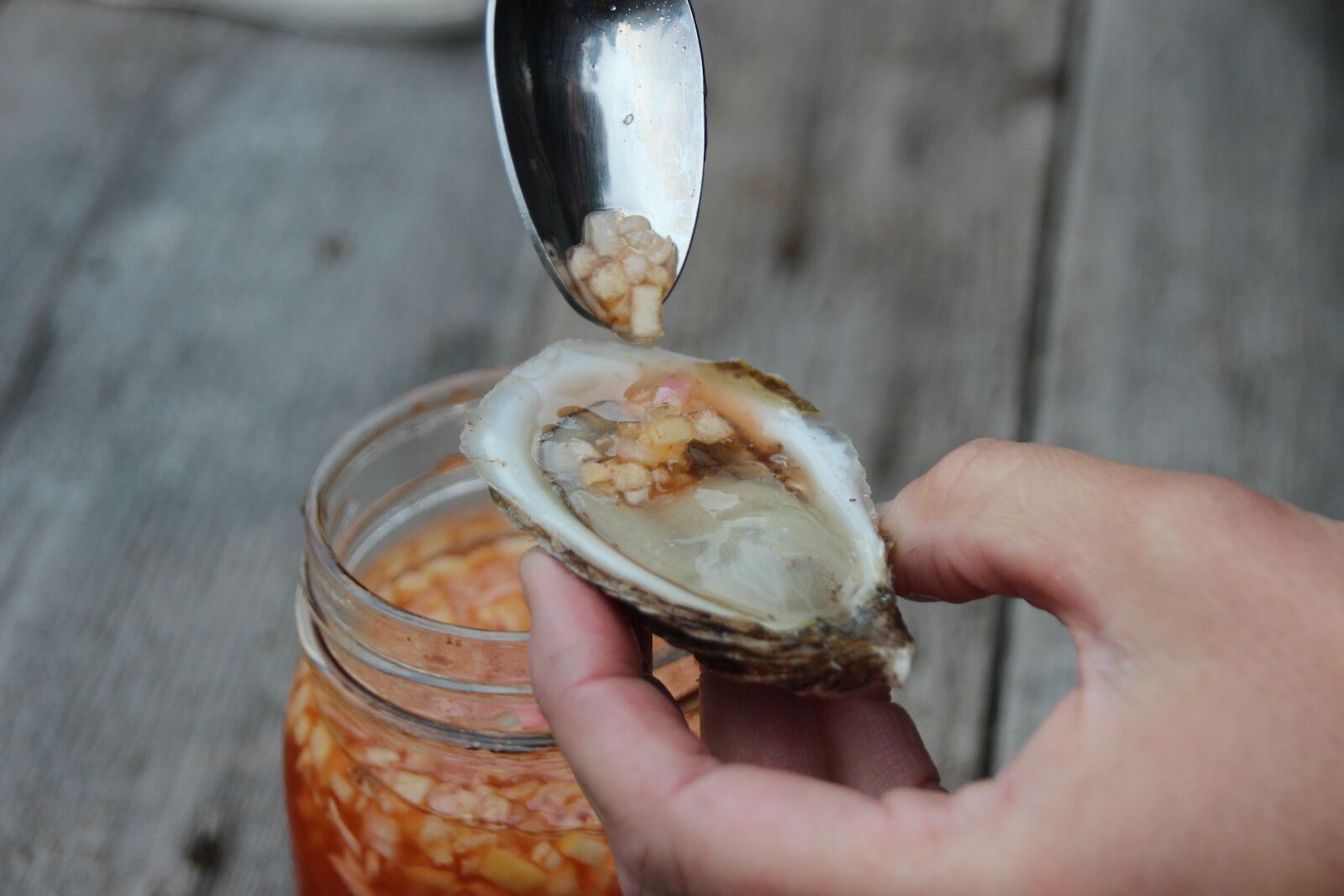 A silver platter of oysters chilling on ice is waiting for guests. I select one and add a dash of mignonette sauce. Photo: Darcy Rhyno

After we enjoy our appetizers, the group embarks on the journey to the larger sea cave, where we’ll be seated for dinner. I feel so small, clambering around on the rocky outcrops covered in thick layers of seaweed. Up and down we go, along a path so far from the bay, it’s hard to believe it’ll all be under water six hours from now. 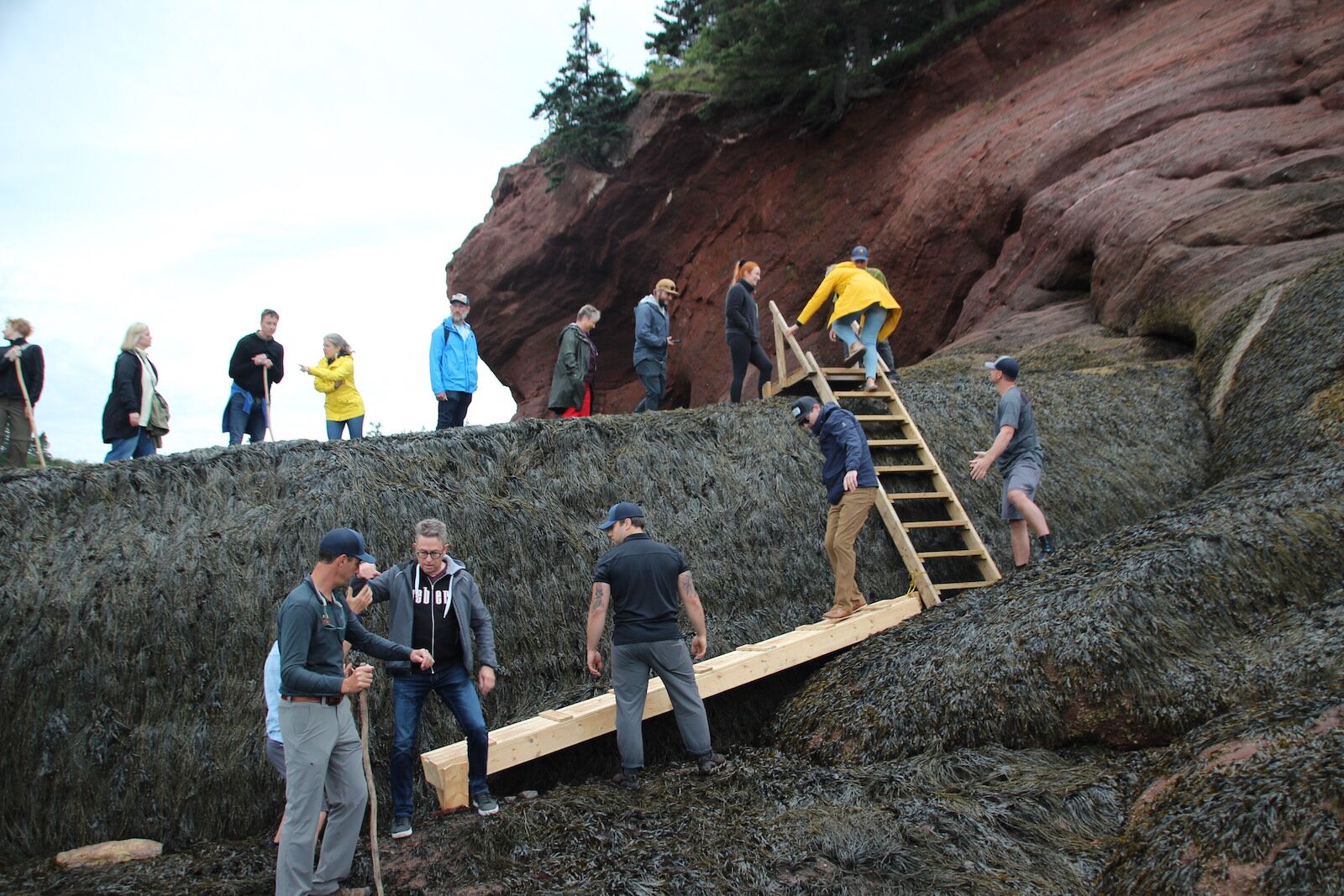 The guides have carefully cleared narrow paths through the slippery seaweed. In one tricky spot, they’ve set up these temporary stairs so that guests can navigate the boulders. Photo: Darcy Rhyno

Up over the last ledge and around a corner, we finally arrive at our destination: A long picnic table is set up at the mouth of the cave. It’s clear there’s no other way to get to this sea cave—much larger than the previous ones—than to hike across the ocean floor at low tide. 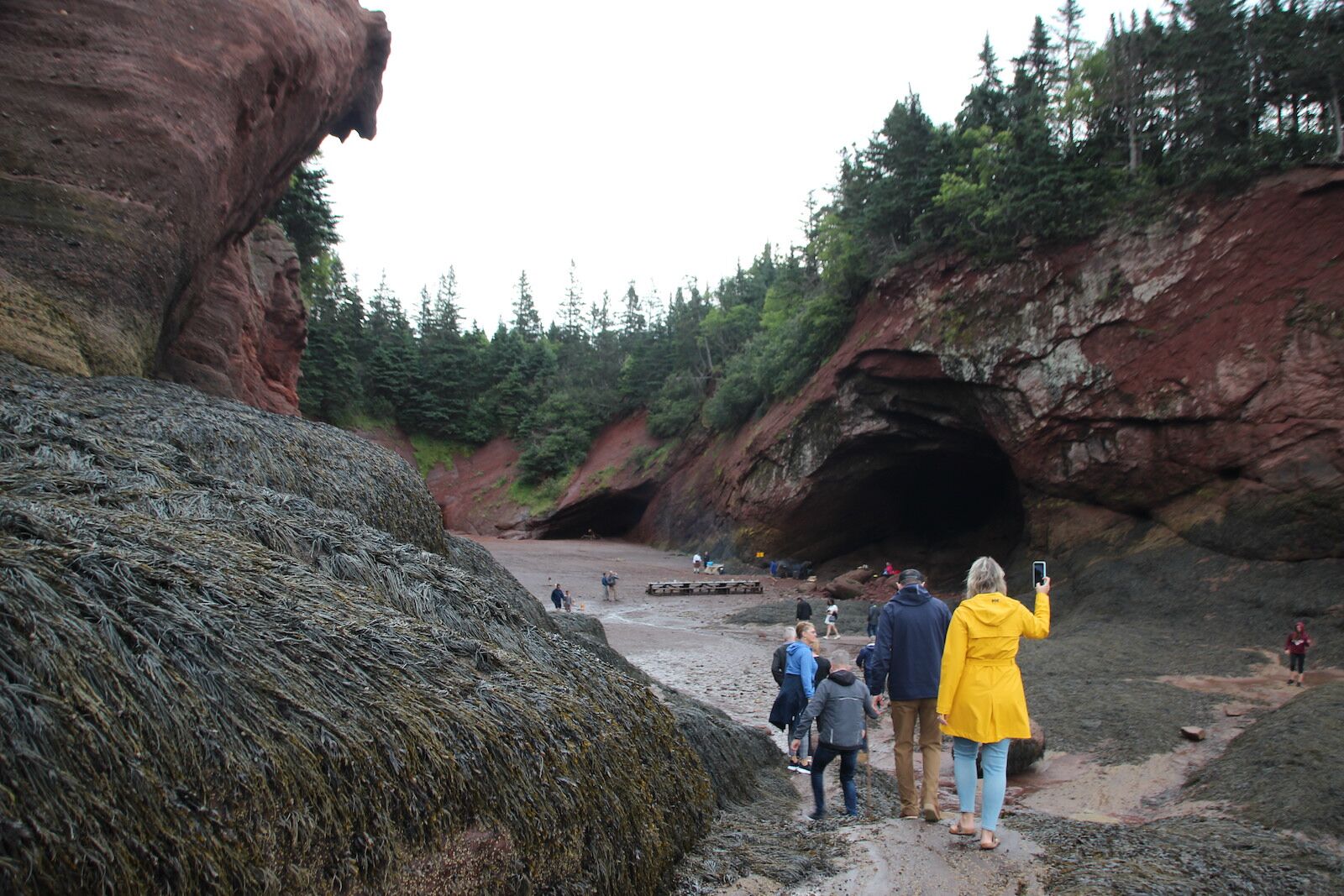 This short gorge was gouged from the landscape by those legendary tides. When we turn the corner, and head down to the ocean floor, we’re greeted by lively, traditional Acadian fiddle music. This is also where the mouth of the sea cave comes into view. Photo: Darcy Rhyno 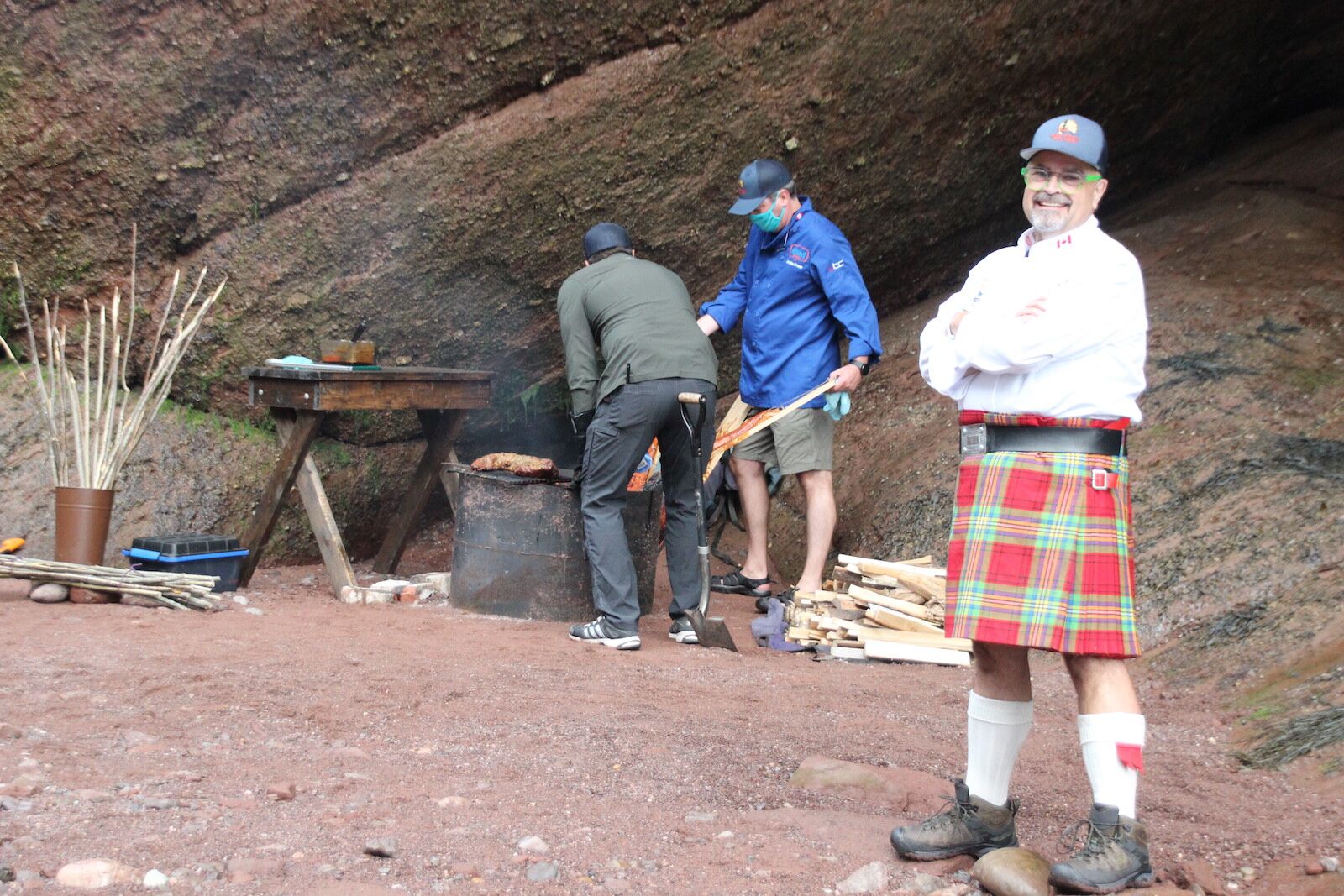 Chef Alain Bossé welcomes us to his kitchen with that spirit of hospitality Canada’s Maritime Provinces are famous for. As is obvious by his attire, he’s known as The Kilted Chef, though his heritage is French Acadian. He’s originally from New Brunswick, which is, surprisingly, the only officially bilingual province in what is generally considered a bilingual country. Photo: Darcy Rhyno

As we arrive and explore the outdoor dining room, Bossé and the Bay of Fundy Adventures team are already getting the first course together. 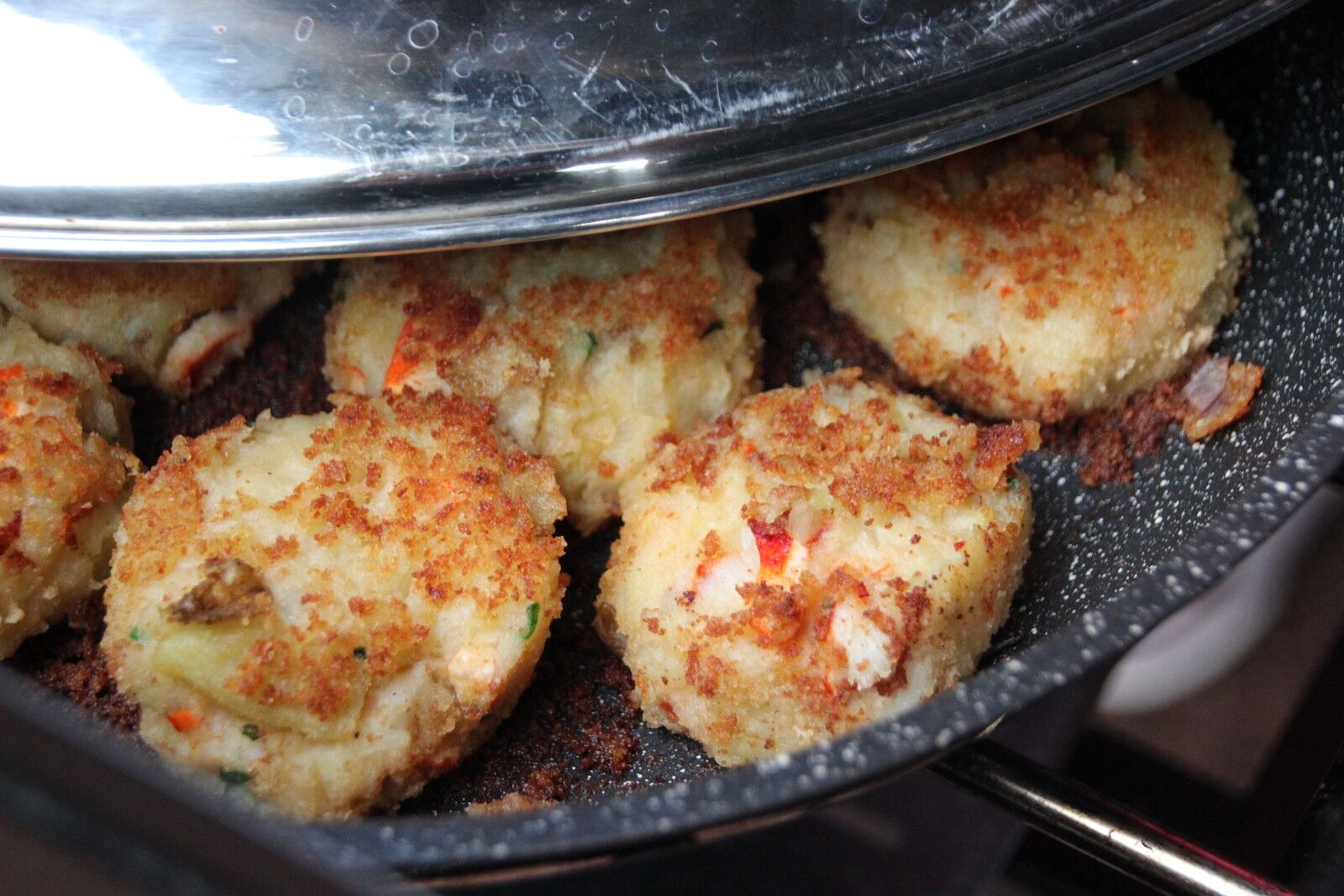 Fresh, local seafood is the focus of this dinner. Peeking out from inside a pan, the first course, lobster cakes, are ready to take center stage. Photo: Darcy Rhyno 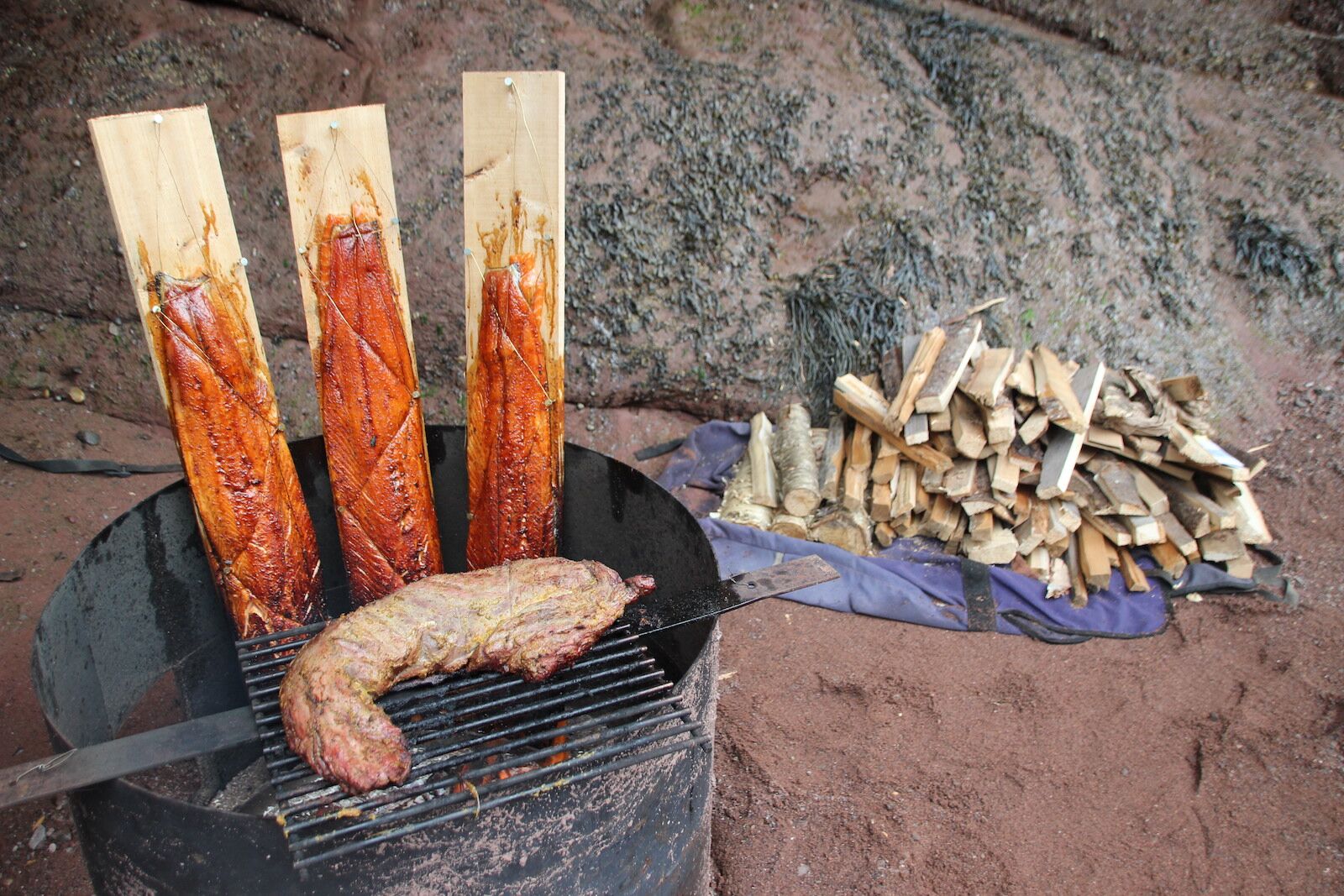 This custom-made cooking barrel works by pulling air in through a hole cut in the side to feed the fire. Chef Bossé is using it to cook salmon tied to planks and grill beef tenderloin. Photo: Darcy Rhyno 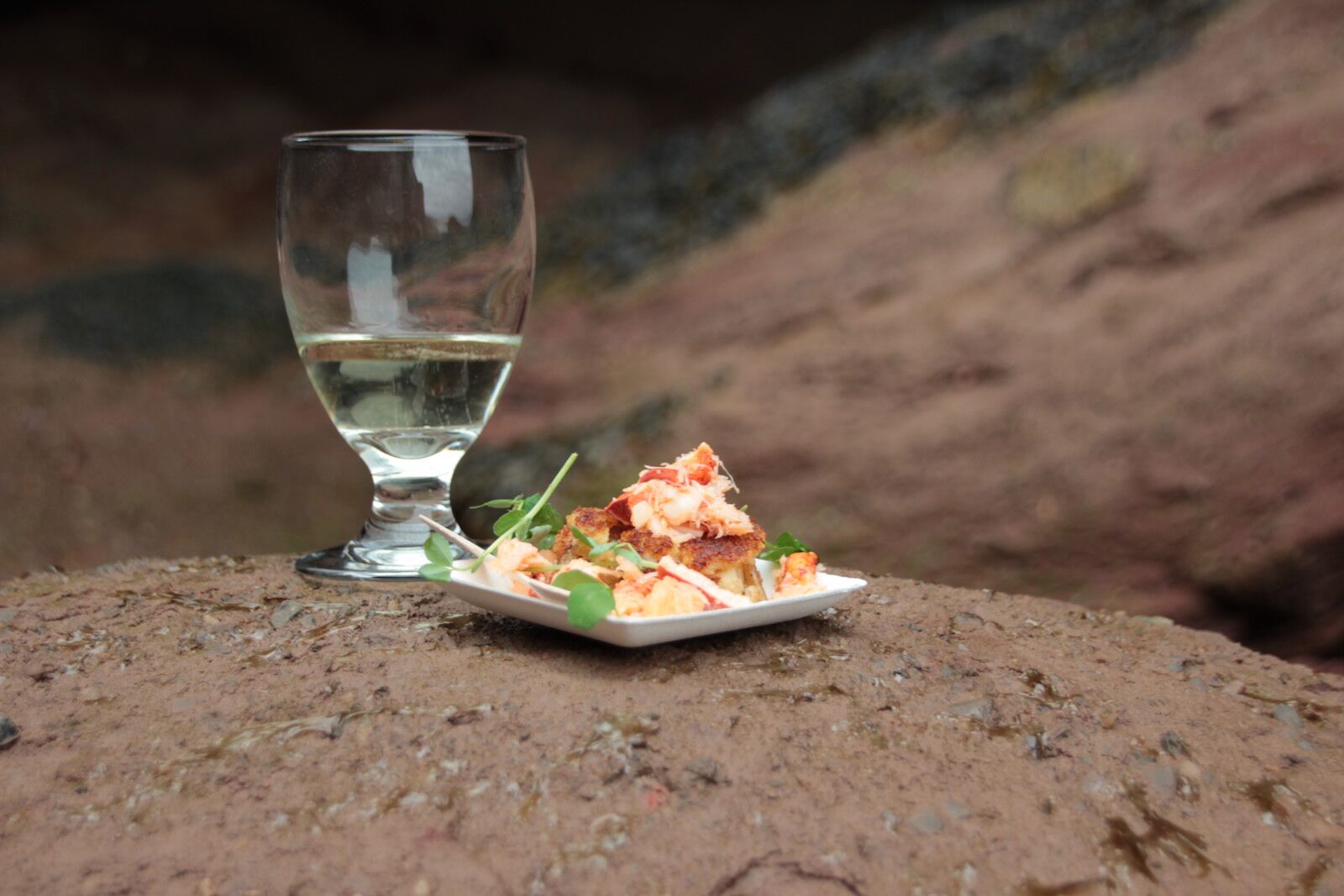 While the main course cooks, the team pops and pours sparkling wine to complement the lobster cakes served on a bed of seaweed remoulade. Bossé tells us he literally chopped the seaweed from the rock to make the remoulade. Photo: Darcy Rhyno

The atmosphere is casual around the communal table where I meet couples, many of whom seem to seek out these kinds of dining experiences as a hobby. We swap stories of memorable meals and road trips, creative chefs and inspiring landscapes. Because our voices echo off the stone walls surrounding us on three sides, the ambiance is one of intimacy, even though we’re outside in such a large space. 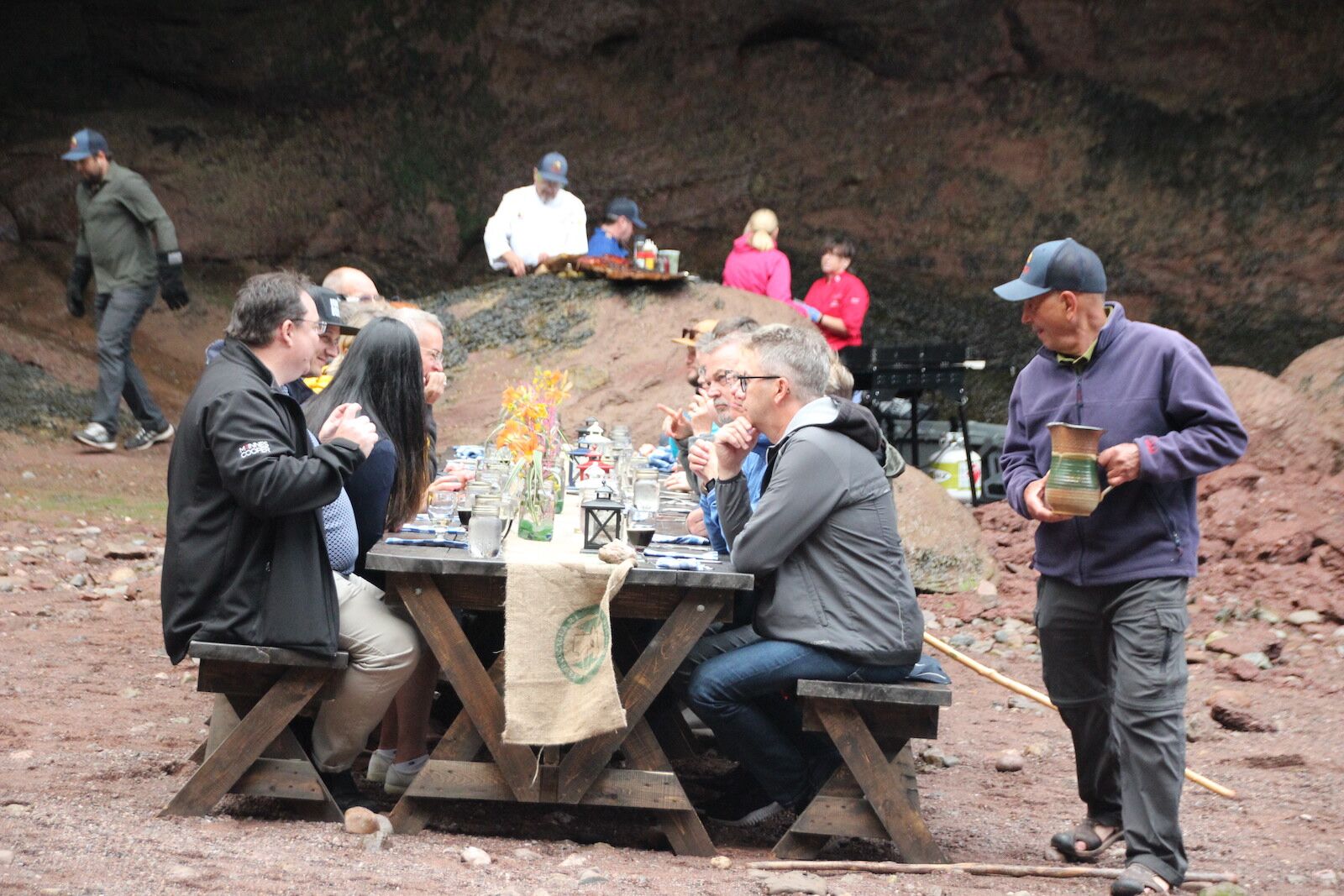 A boulder at the mouth of the sea cave serves as the prep table. Bossé calls it his “chef’s pulpit.” He prepares dinner while guests sit at the long communal dinner table. Photo: Darcy Rhyno 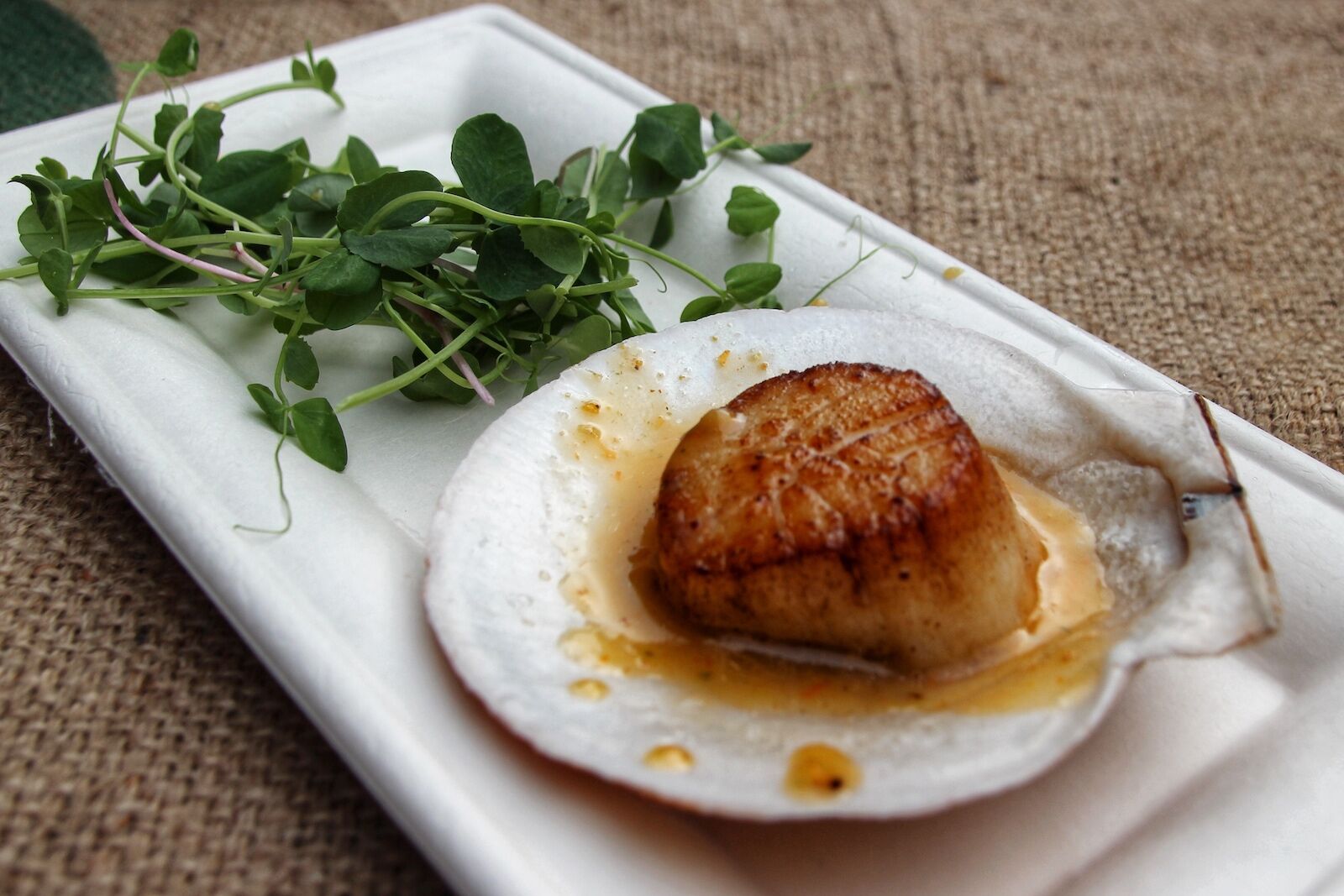 For the next course, a local Fundy scallop the size of a marshmallow arrives on the half shell flavored with sea buckthorn vinaigrette. It seems chef Bossé isn’t just passionate about local seafood. He’s also an avid forager. Photo: Darcy Rhyno 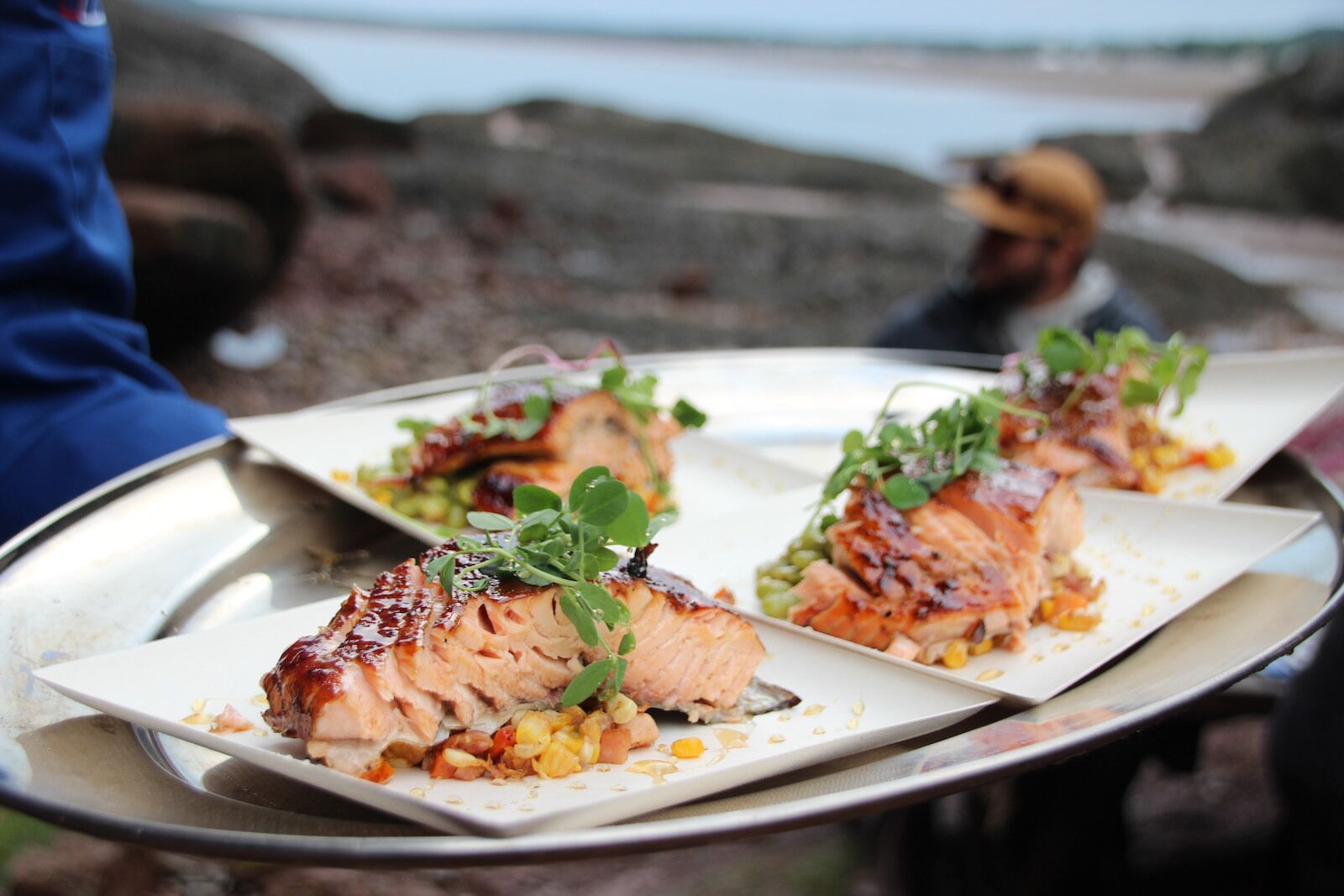 The main course arrives: maple planked salmon on a bed of edamame and succotash. Bossé tells us he planned the meal around this salmon dish because New Brunswick and its rivers are famous for the fish, and with oysters, lobster and scallops on the menu, the theme as of the evening is local seafood. Photo: Darcy Rhyno

The end of meal is nearing. Now it’s time for dessert. Because we’ll be assembling our own dessert, Bossé begins with a demonstration. 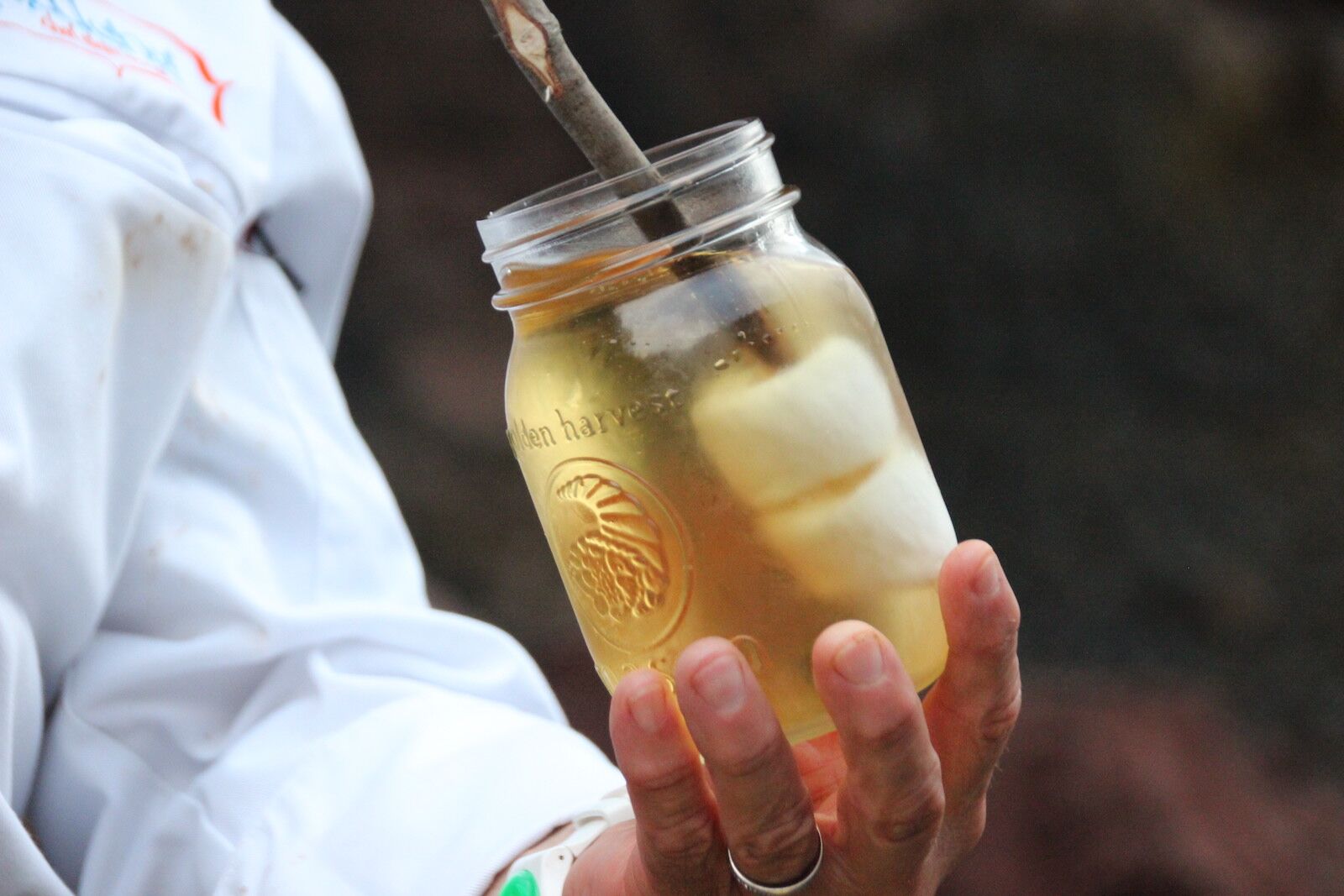 Grown up s’mores begins by dipping marshmallows into a jar of brandy. Photo: Darcy Rhyno 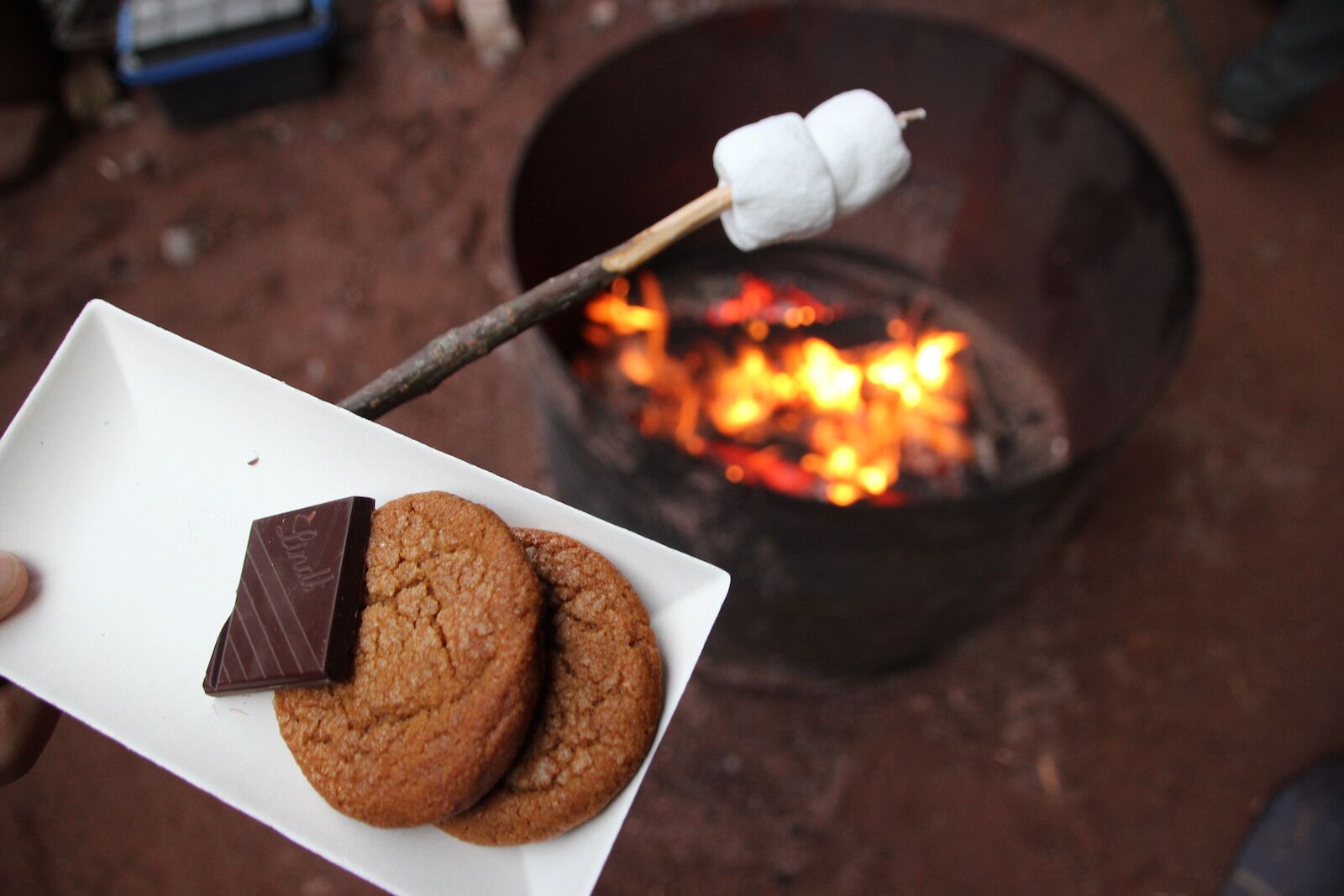 Grabbing a plate with ginger cookies and fine chocolate, I’m ready to head over to the cooking barrel. Even with that brandy, the child inside me is having a great time with s’more ready to assemble and marshmallows to brown over the open fire. Photo: Darcy Rhyno 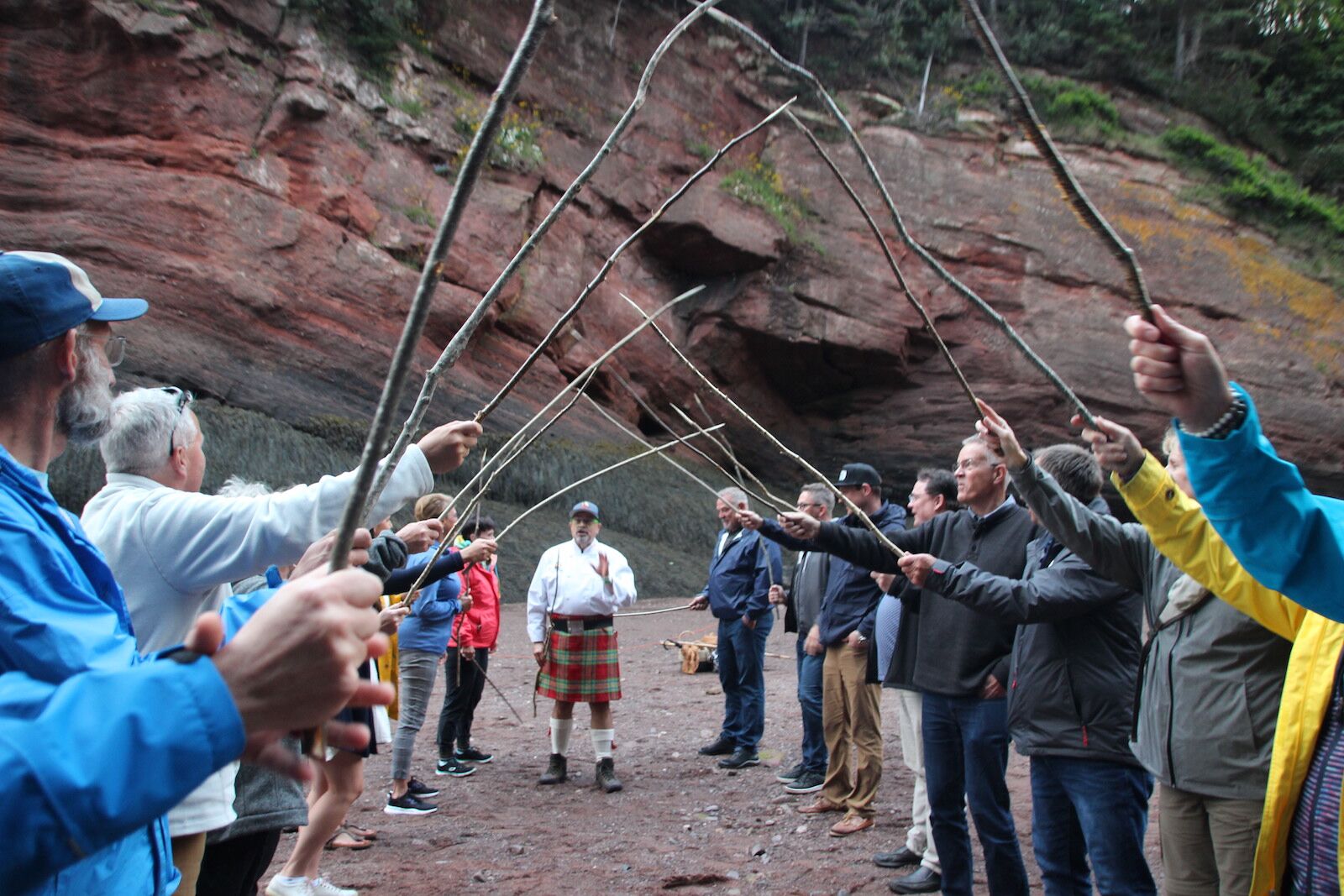 In preparation for departure, our culinary captain leads us in a joyful, country dance before the return of the world’s highest tide. Photo: Darcy Rhyno

Restaurants + Bars6 of the Most Extreme Dining Experiences in the World
Tagged
Food + Drink Canada
What did you think of this story?
Meh
Good
Awesome