At first glance, Wat Mae Kaet Noi, on the outskirts of Chiang Mai, looks just like any other Thai temple, with a few statues of people performing a welcoming wai in front of the ordination hall. Yet if you wander through the archway to the left that leads to a garden shaded by tall trees, you’ll know instantly that you’re in purgatory. 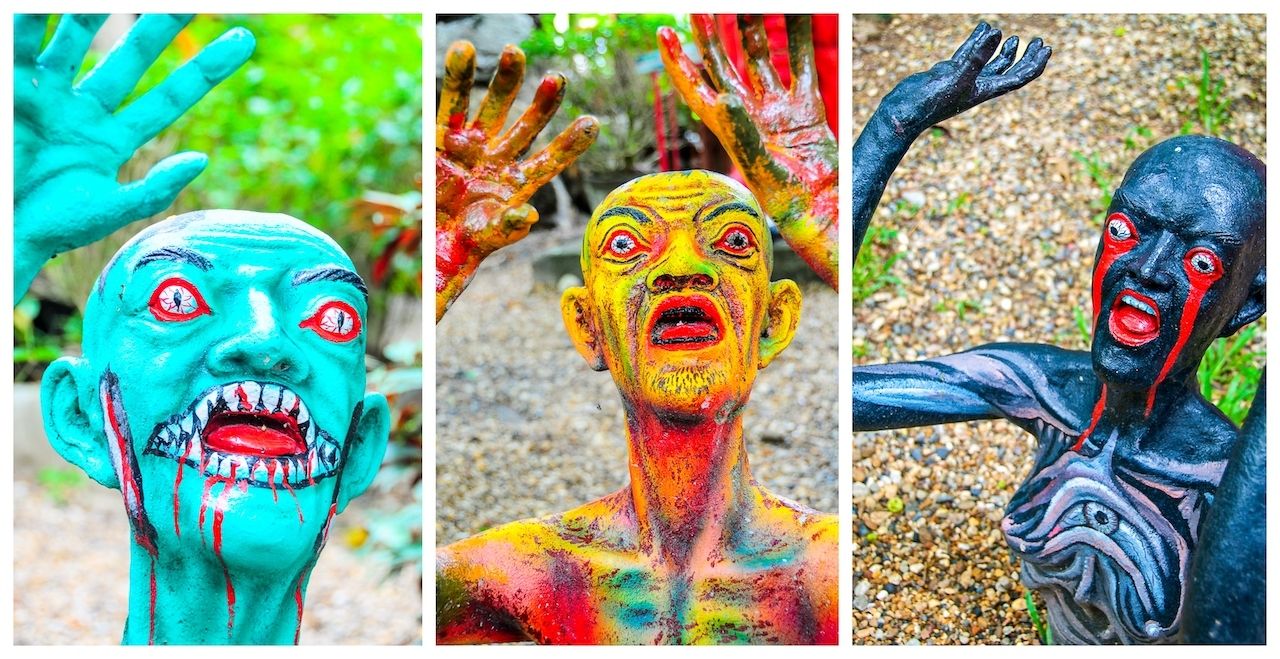 Though the concept of a Christian hell is widespread in the West, you are very unlikely to find graphic statues of people being tortured in a churchyard in Europe or the United States. By contrast, in Thailand, temple complexes feature a Buddhist “Garden of Hell” (narok in Thai), either in the form of statues or murals, as a warning of what awaits sinners in the afterlife. However, few of them feature realistic-looking people or include machines that bring the scenes to life the way Wat Mae Kaet Noi does. Work began on this project in 2015 and is still ongoing; hell is getting bigger day by day. 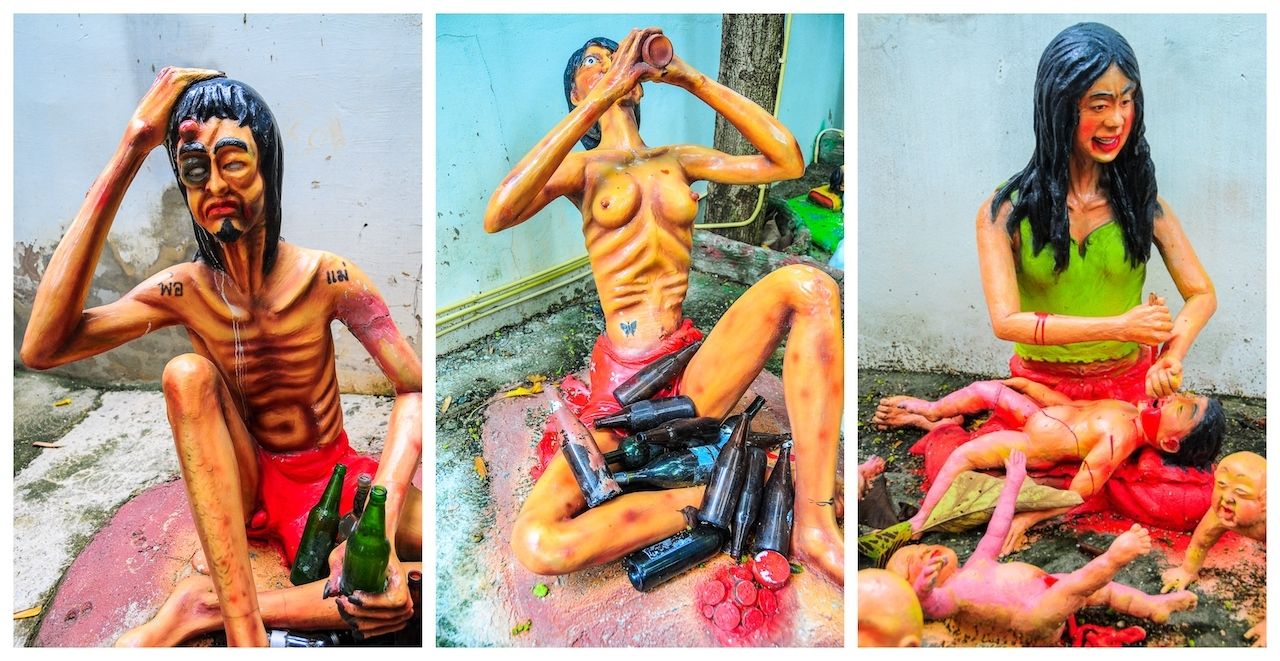 The first scene in purgatory features an emaciated man and woman, each with a bottle in hand and several more at their feet. Excessive consumption of alcohol must be one of our greatest weaknesses as humans, but one look at these drunks should be enough to encourage visitors to lay off the sauce for at least the rest of the day, if not forever.

From here, each scene seems more ghastly than the last. Next up is a warning against abortion, where discarded fetuses and a woman stabbing a baby are straight from a horror movie. 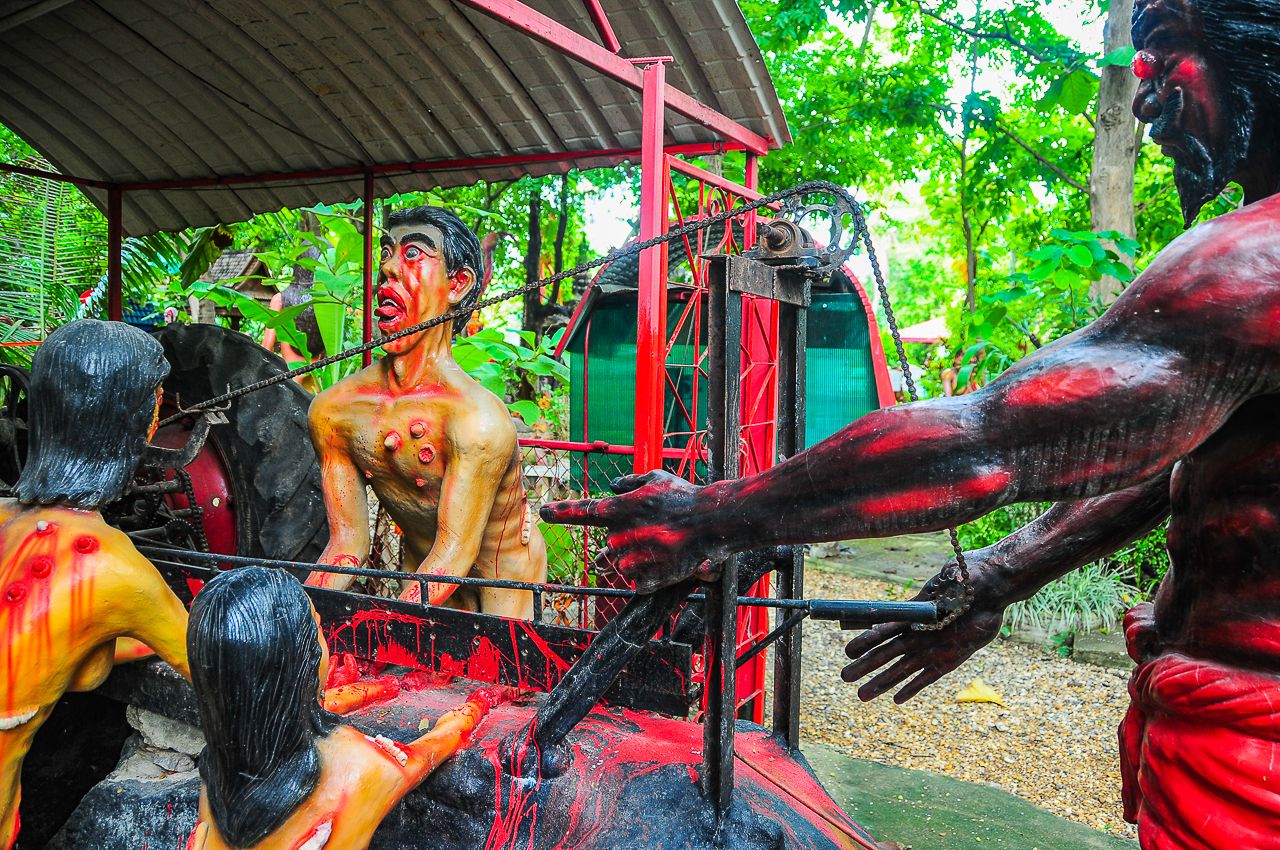 A few steps further into the Garden of Hell, the sound of screaming fills the air. A visitor who has just slipped 10 baht into a machine jumps back in fright as a saw starts grinding back and forth, hacking off the hands of the statues of people who were presumably caught stealing, and shrieks of pain come from the unlucky amputees.

He says that some years ago he had a vivid dream (or nightmare, more likely), from which he awoke with the conviction that he should create such a garden as moral teaching for the villagers who live in this area.

There are several young children walking among the scary statues; Phra Sa’ad says that teachers from local schools often bring their pupils here. Thai temples still function as the hub of communal life, and through his Garden of Hell, Phra Sa’ad is attempting to provide moral guidance to the members of the community. 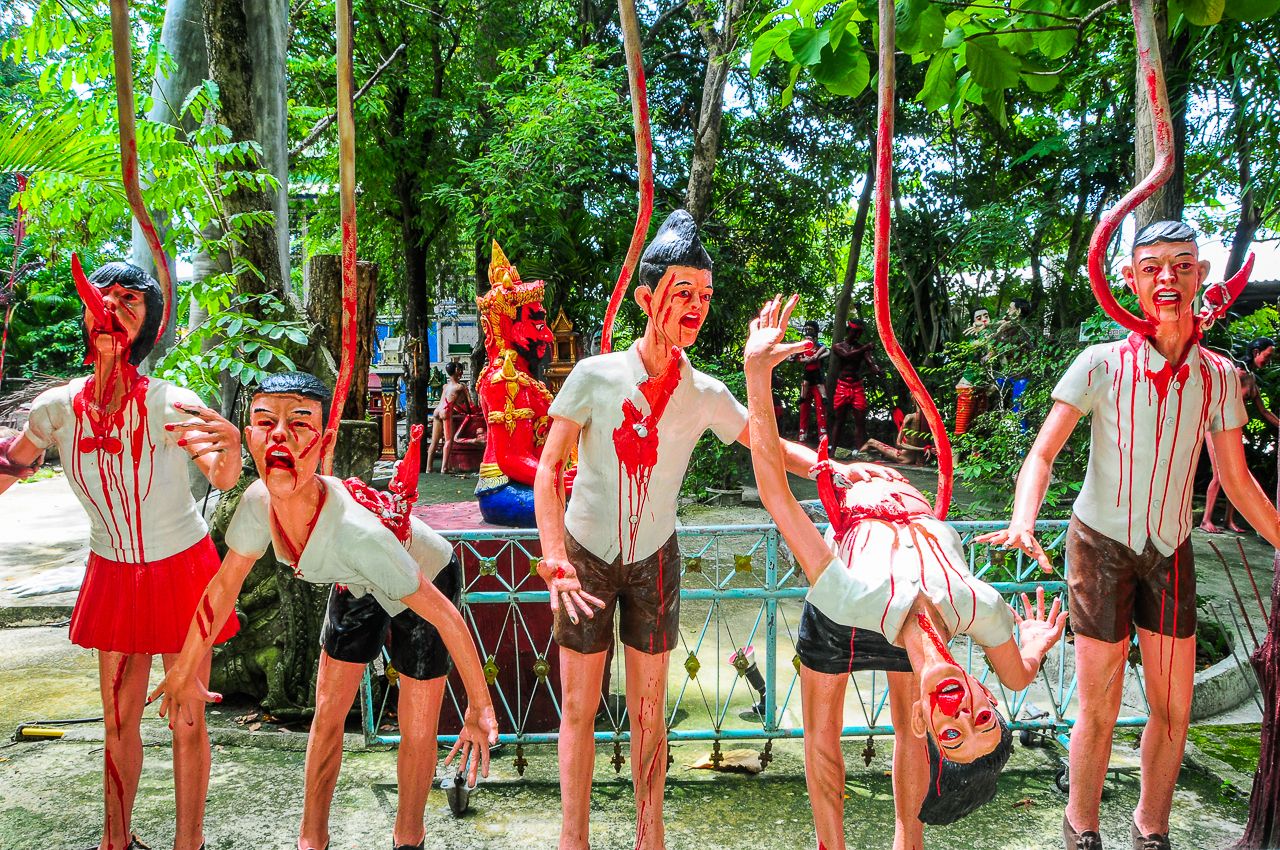 One scene appears to be directly addressed to school children. In the front row are well behaved, respectful students, while behind them are troublemakers and bullies, and finally at the back a graphic portrayal of what happens to badly behaved school kids — they are impaled on giant fish hooks. 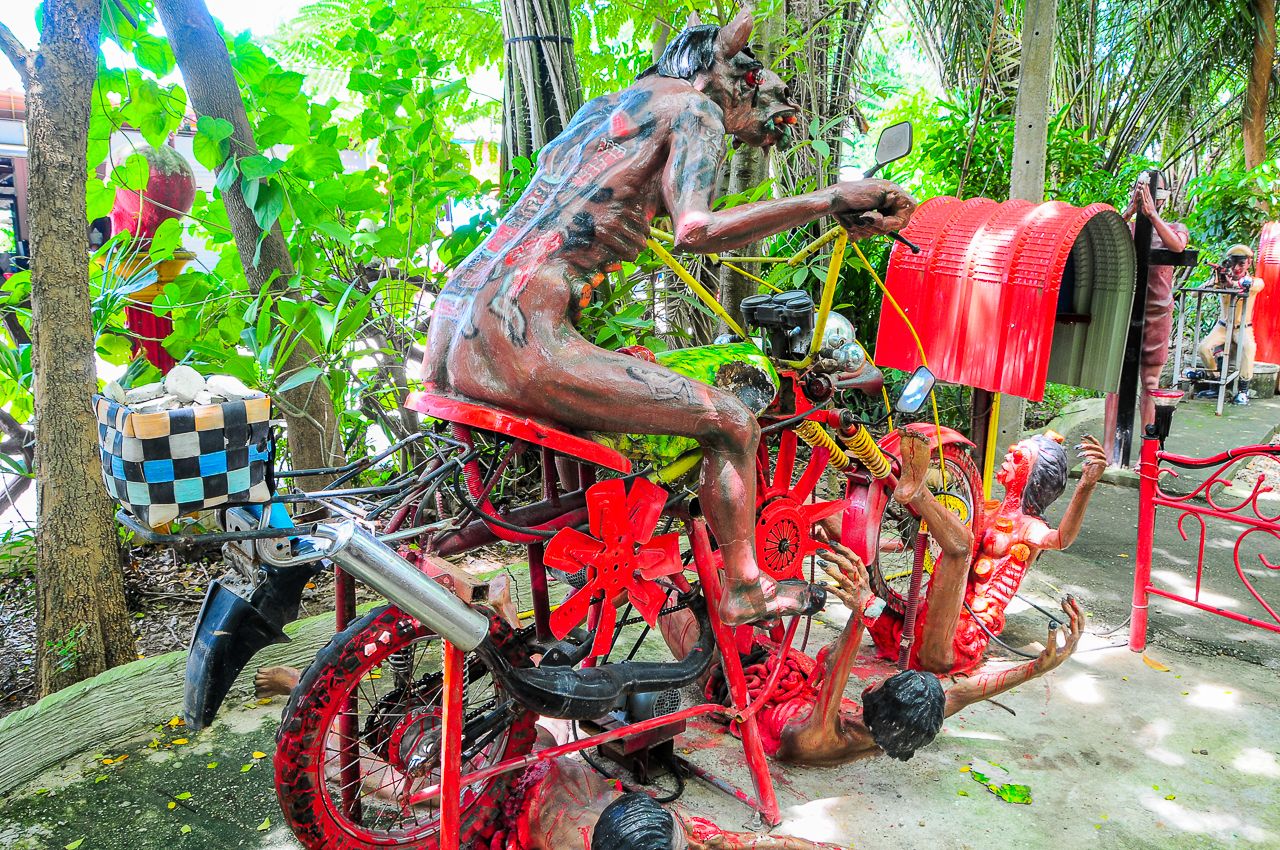 Phra Sa’ad pauses in front of various statues and explains what they represent. One grotesque statue is of a man with a wolf’s head riding a motorbike over several disemboweled people — apparently a warning about the dangers of selling or buying ya ba, or methamphetamines, which are rife among Thai youth these days.

The man with the long tongue being yanked from his mouth, Phra Sa’ad explains, is a judge who has been bribed to proclaim false verdicts and convict the wrong people. 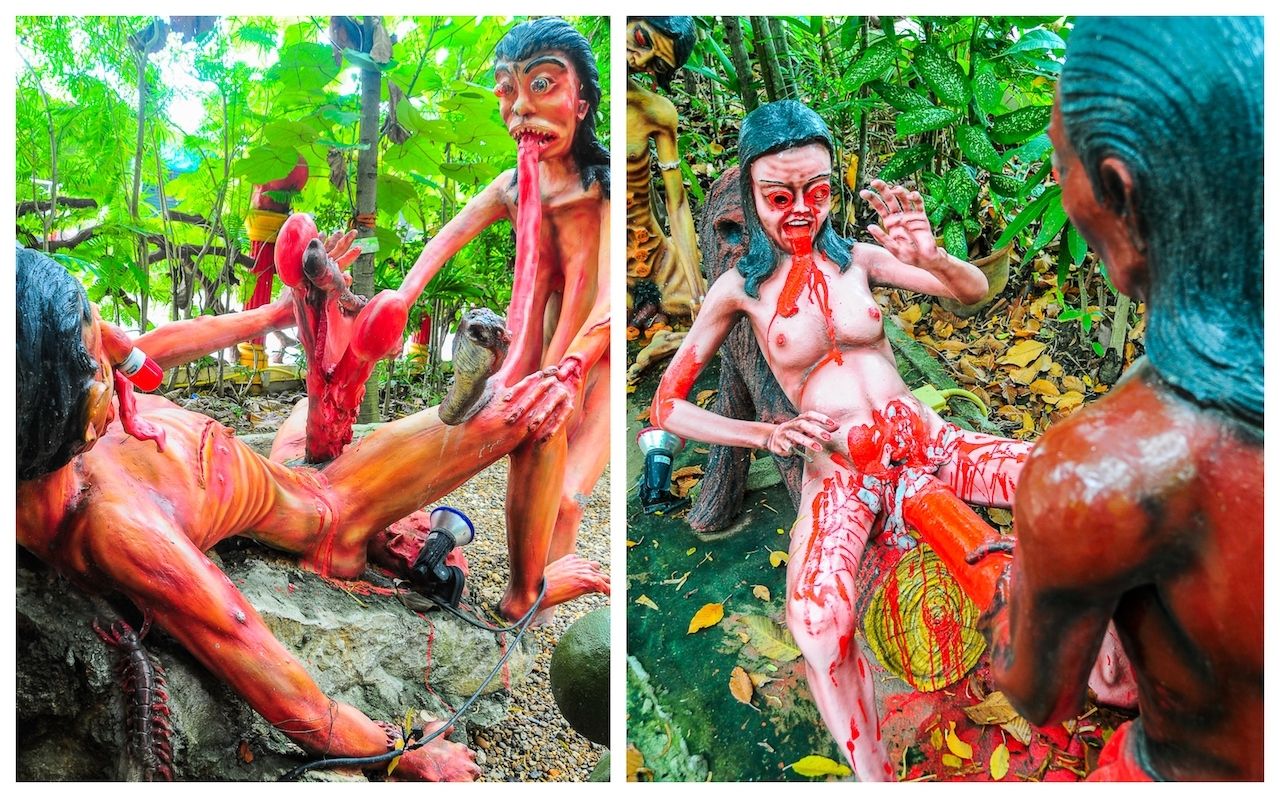 Many scenes are sex-oriented, such as the guy having his penis split lengthwise with an axe and a woman with a pole being thrust between her legs. The abbot explains that this is the retribution adulterers and nymphomaniacs who cheat on their partners should expect. 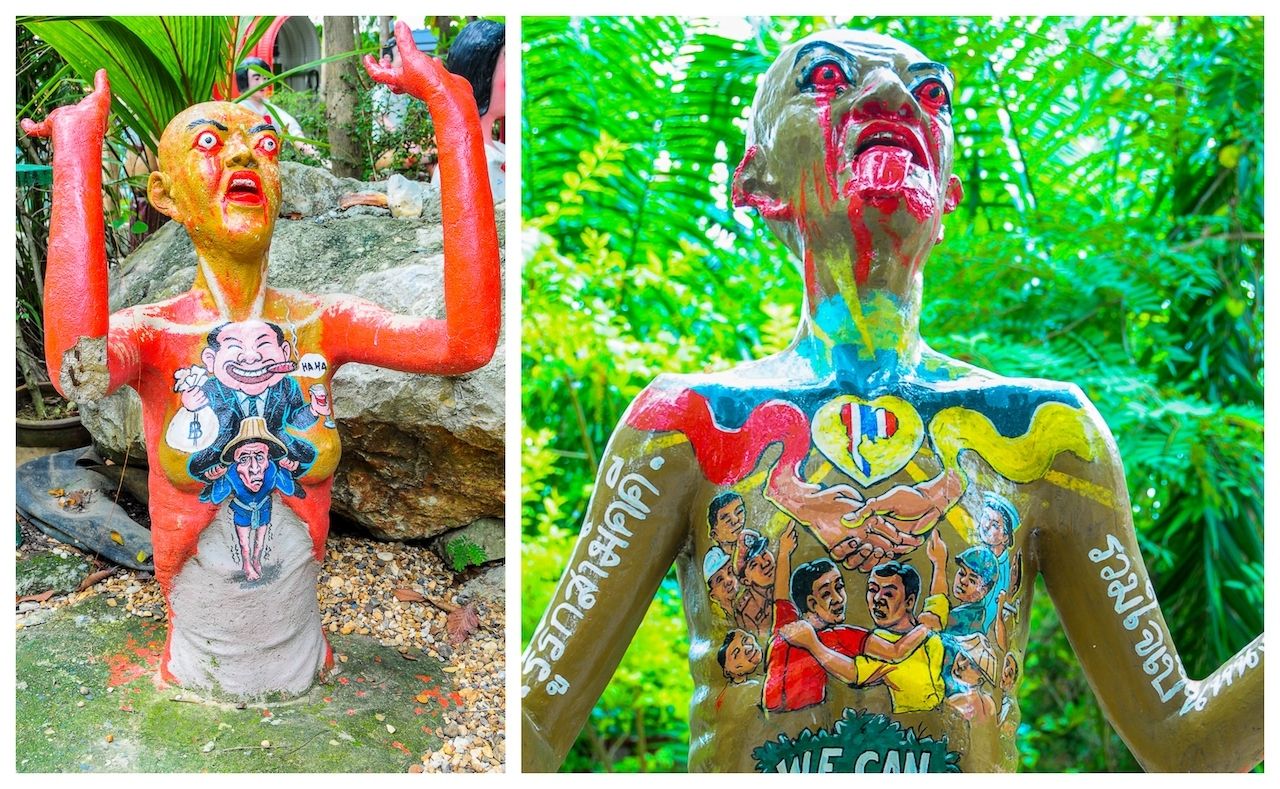 The sculptures were crafted by students from a local university, and Phra Sa’ad points out that several of them bear political and social comments, like the painting of a fat businessman carrying a sack of money and riding on the back of a starved Thai farmer, and the slogan “we can change” accompanying an image of two men, one wearing a red shirt and another wearing a yellow shirt, enemies in recent political protests, reconciled and walking arm-in-arm. 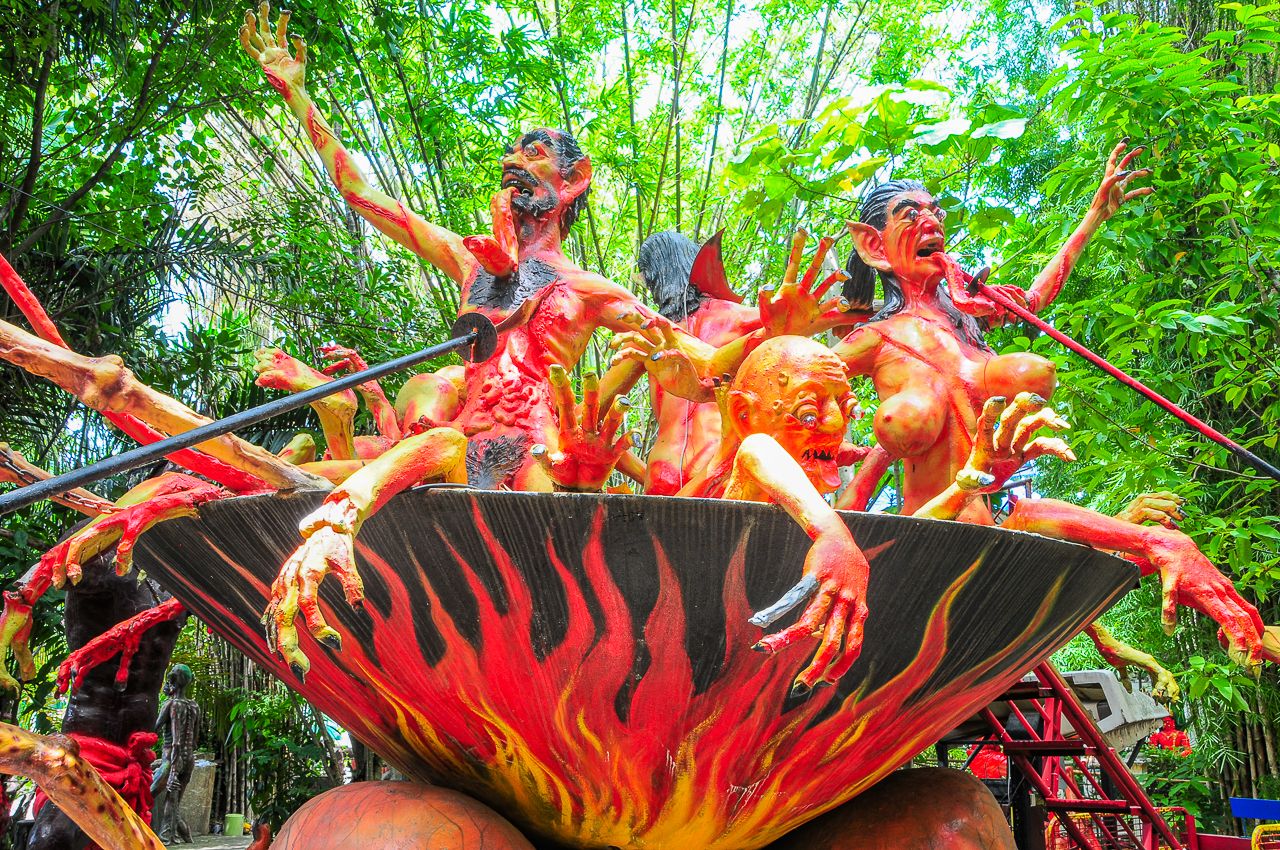 The centerpiece of the Garden of Hell is of sinners boiling in a pot — a common sight in many Thai temple complexes. In this case, the sinners have elongated tongues, pointed ears, and red light bulbs for eyes, which light up when 10 baht goes in the machine. Dark-skinned demons are depicted driving wrongdoers toward it or hurling them into the pot.

The path to goodness

Finally, the pathway leads into a corner of the garden that is clearly intended to represent Buddhist heaven or paradise, where familiar statues depict scenes from the life of Buddha — walking on lotus pads at birth, meditating, and preaching to his disciples.

To get to Wat Mae Kaet Noi (also known as Wat Si Don Chai Pa Tung Ngam), head about 6 miles north out of Chiang Mai on H1001 to Mae Jo, then turn right on to H1367. The temple is on the right after about 1.2 miles. If you don’t have your own car, catch a ride with Grab, Southeast Asia’s most popular ride-hailing app.

If you don’t want to be thrown in the pot yourself, remember to dress respectfully, as at all Thai temples — no sleeveless shirts, miniskirts, or shorts.

Art + ArchitectureThe 7 Most Amazing Temples in Thailand Outside of Bangkok
Tagged
Religion
What did you think of this story?
Meh
Good
Awesome