Beyond the Arctic Circle, the upper regions of Finland, Sweden, and Norway are magical in winter. They’re ideal locations to view the aurora borealis, Earth’s best light show. In the coldest, darkest months, the night sky frequently glows with dancing green, purple, and white lights above the snow-covered landscape.

While this all sounds lovely, for you winter might be more about skiing. In fact, you can actually glimpse the famed Northern Lights and schuss down snowy slopes. Finnish Lapland and the upper reaches of Sweden and Norway offer excellent skiing north of the Arctic Circle, the prime aurora spotting zones. The cold temperatures in these parts also mean these resorts are almost guaranteed to have lots of snow.

One of the coolest things about skiing in Lapland is that you might actually see the northern lights while you’re on the slopes. In other parts of the world, ski resorts close when the sun lowers at around 3:30 or 4:00 PM. But up here, because there’s no sun in the winter, at 3:00 PM it’s already pitch dark, so the slopes have to be lit. Lights stay on so you can ski as late as 5:00 or 7:00 PM, depending on the resort — meaning you might even be able to view the aurora borealis as you speed down the hill. 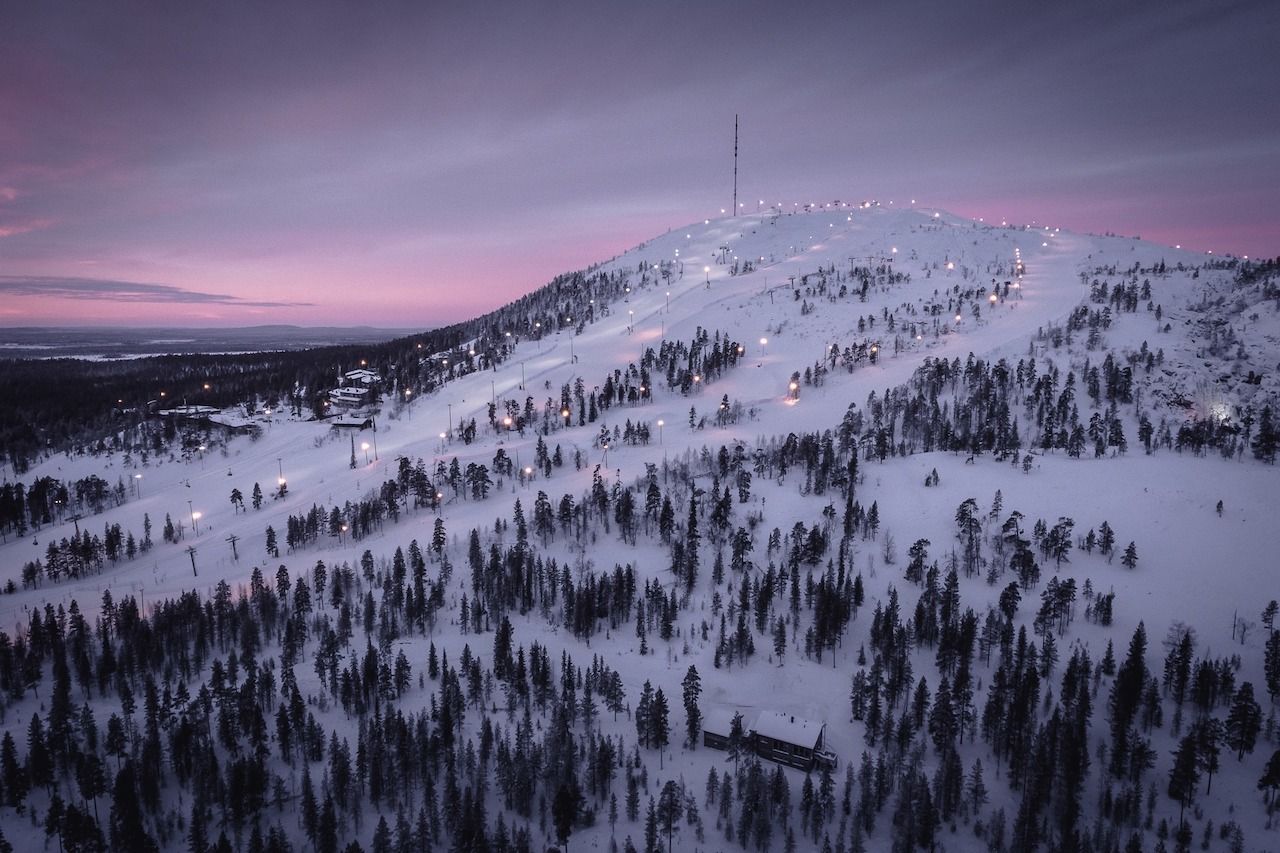 Glass igloos in Finland designed for aurora viewing recently went viral on social media. At Pyhä Tunturi, you can sleep in those famed glass igloos, as well as in aurora huts, or real snow igloos. Wherever you stay in Pyhä Tunturi, you’ll be located close to excellent skiing.

Pyhä Tunturi isn’t a large resort, but it does have nine lifts that offer access to terrain for all levels. It also has an especially impressive amount of free-riding terrain for more advanced skiers. Pyhä Tunturi is divided into seven off-piste areas, made more accessible with a lift pass. Additionally, nearby Pyhä-Luosto National Park is yours to explore. Finland doesn’t have many big peaks, but there are steep runs to be had here. To get the most of the back-country and off-piste skiing, Pyhä Tunturi Ski School leads guided tours.

If you have some non-skiers in your group, or want to take a break for a day, Pyhä Tunturi offers loads of activities. You can go ice-fishing, ride a husky-pulled sled, or go relax in a famous Finnish sauna, just to name a few. Pyhä Tunturi is also only the second place in Finland to offer electric snowmobiling safaris — where you can really appreciate the silence of the Arctic winters.

Getting there: Fly or train to Rovaniemi in Finnish Lapland. From there it’s a one-hour-and-45-minute drive to Pyhä. SkiBus connections are available from Rovaniemi airport and train station. 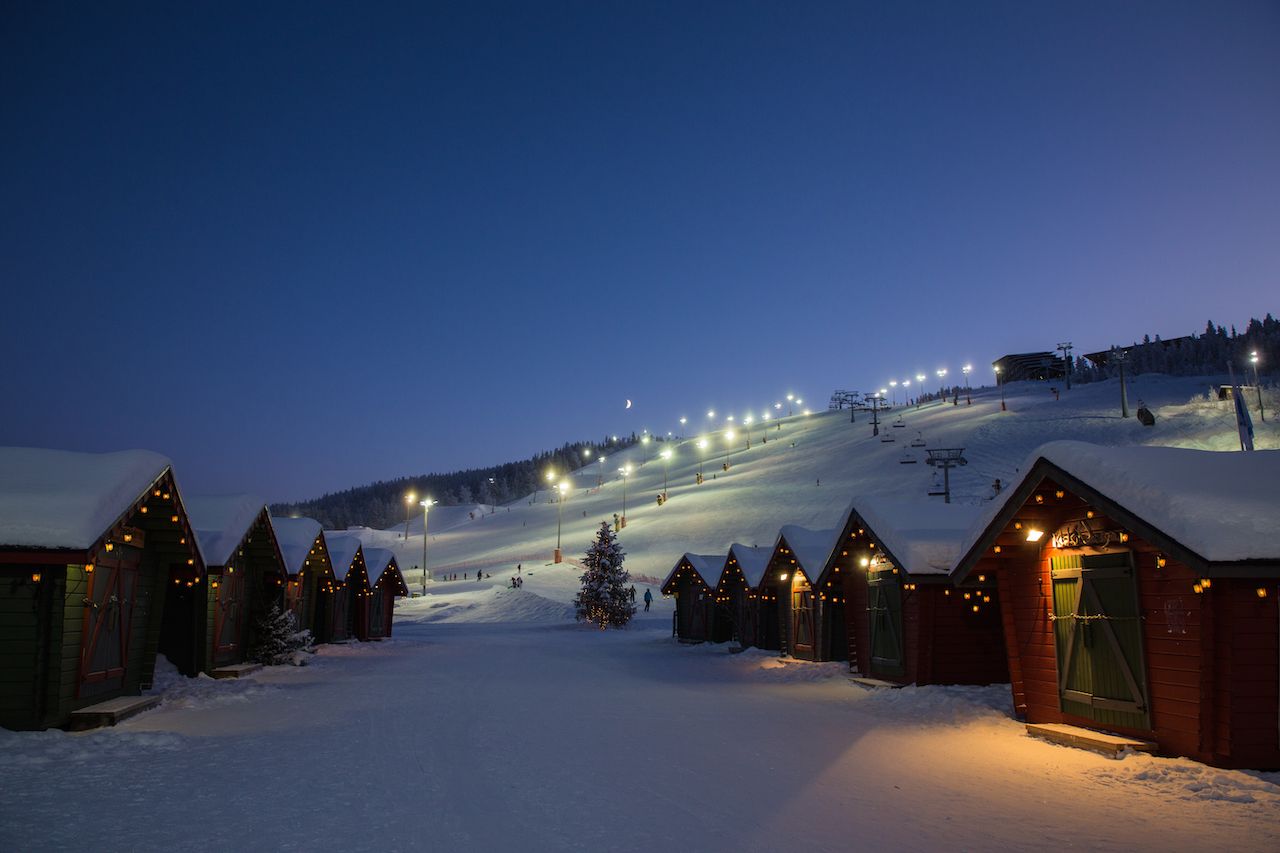 Levi is a very developed, family-friendly resort with excellent skiing and lots of things to do off the mountain. The mountain is big, boasting 27 ski lifts — many of which are modern, high-speed lifts — and diverse terrain for all levels of shredders. I have great memories of racing my sister from the top of the mountain down to one of the seven on-mountain restaurants to warm up from the minus-20-degree (Celsius) chill.

Off the slope, Levi’s got you covered. Levi is a popular destination for both skiers and non-skiers wanting to experience the Lappish winter and northern lights. Here, as elsewhere in the Arctic, the sky is awesome even when the northern lights don’t show themselves. During the few hours of daylight, it glows with pink and orange hues emanating from a sun that’s hidden just below the horizon.

Like Pyhä Tunturi, you can stay in a glass igloo here, but you can also choose from numerous vacation rentals and hotels. Levi’s town is relatively large, so you’ll find plenty of delicious restaurant choices on and off the mountain. And, of course, there are lots of opportunities to explore the Lappish landscape including snowshoeing, cross-country skiing, and fat-biking. If you find it’s too cold to go outside on any given day, the town has indoor activities as well — from bowling to Spa Water World, a massive indoor and outdoor pool system.

Getting there: You can fly from Helsinki or Stockholm direct into Kittila, which is a 15-minute drive from Levi. 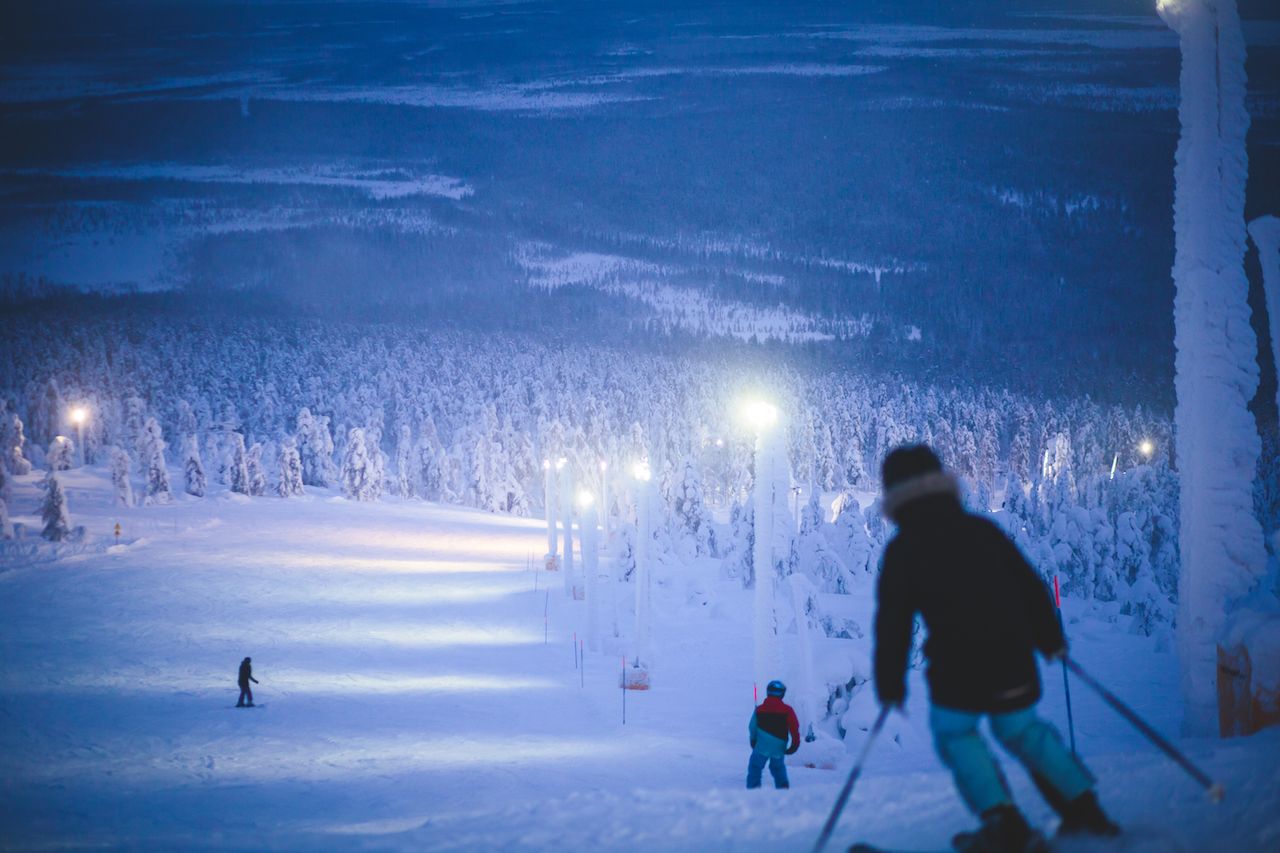 Ylläs is the biggest and highest-altitude ski mountain in Finland, and it’s the ideal place to take in the breathtaking views of Finnish Lapland and see the aurora borealis. Skiing in Ylläs is practically made for its vistas. The wide, uncrossed pistes go from top to bottom in a straight line, so you don’t have to worry about losing your way. As you cruise down the nearly two-mile-long runs, you can be completely undistracted from the view of other snow-covered peaks in Pallas-Ylläs National Park.

Or, when it’s dark out, which it may well be while you’re still skiing, you can admire the star-rich night sky with or without the aurora borealis. Lapland is also famously cold, so Ylläs’s seven-minute gondola that takes you straight to the top of the mountain protected from the elements might prove essential. If you’re super cold, one gondola cabin is actually a sauna.

Ylläs region also offers numerous non-skiing activities, such as snowmobiling and ice-hole swimming. Ylläs is also home to the Snow Village. The Snow Village is a five-acre complex built every year with natural ice by ice artists. It has an ice hotel, bar, chapel, and a vast network of corridors filled with snow and ice art.

Getting there: You can fly from Helsinki or Stockholm direct into Kittila, which is less than an hour’s drive from Ylläs. 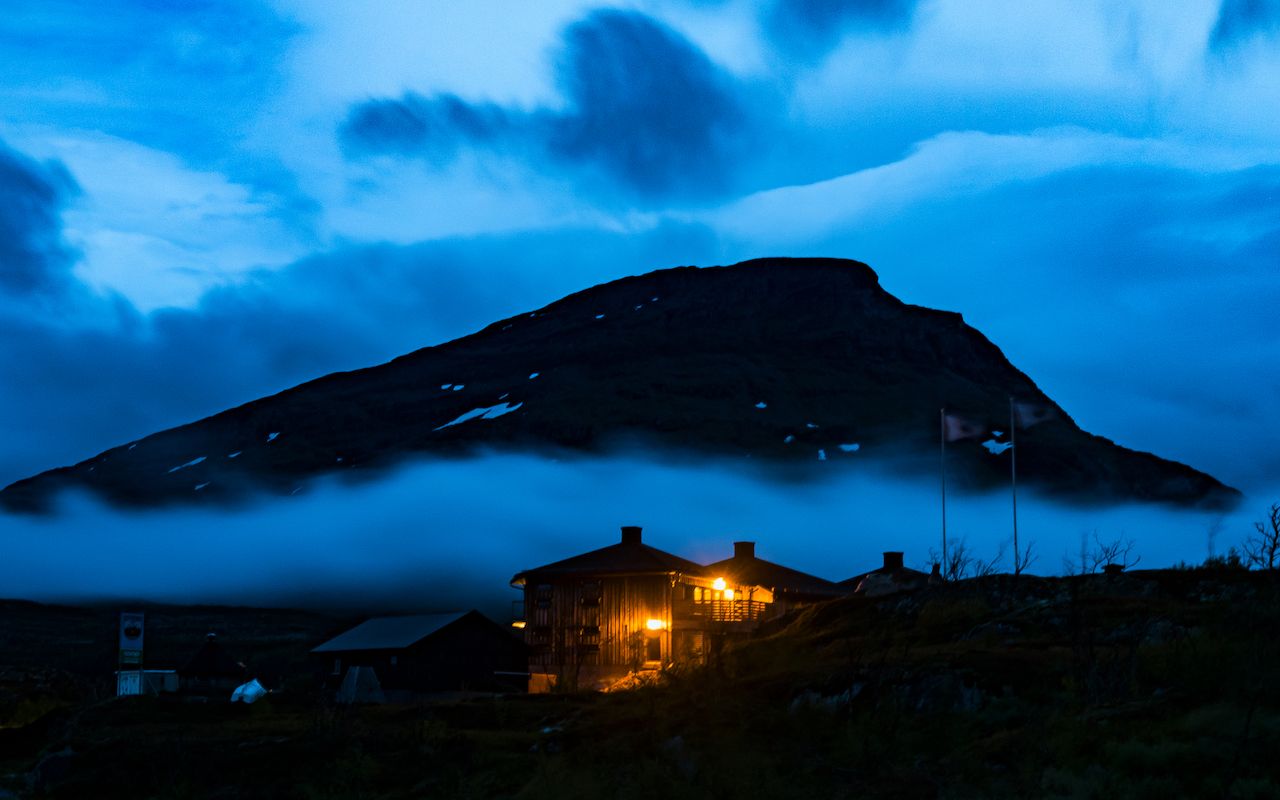 Most of the best Swedish mountains are located further south, outside of the optimal aurora spotting zone. Riksgränsen proves to be an awesome exception. With the most precipitation in all of Sweden, Riksgränsen will deliver the snow goods. Riksgränsen has six lifts and several pistes. Plus, a Riksgränsen lift pass works at Bjorkliden, another 30 minutes away.

If you love to free-ski, Riksgränsen might be the place for you. It’s so famous for its freeskiing that every year in May, Riksgränsen hosts the Scandinavian Big Mountain Championships. You’ll find tons to explore off-piste, and the backcountry is even better. You can also book a guided tour through the ski school and explore Riksgränsen’s renowned backcountry.

Heli-skiing is banned in Norway but not in Sweden. Riksgränsen is right next to the Norwegian border, so you can experience heli-skiing mountains comparable to the Lyngen Alps of Norway. From Riksgränsen there are over 100 mountains you can potentially heli-ski.

The town of Riksgränsen is charming but less developed than other places on this list. It’s pretty small, with three different accommodation choices — which are comfortable but not especially fancy. What you have here are hardcore skiing hard and beautiful views.

If you want to see the northern lights, be aware that the ski season in Riksgransen runs from mid-February to June. Unlike at the Finnish resorts, it’s not equipped for night-skiing. That being said, you will still have a good chance of seeing the aurora borealis if you are there in February or March — just not at the same time as you carving a turn. Instead, you could choose to drive to nearby Abisko National Park. Abisko has stunning, rugged mountains and is a famous place for spotting the northern lights.

Getting there: You can fly into Kiruna and take a bus, train, or car about an hour and a half to Riksgränsen. Alternatively, you can take the 18-hour night train from Stockholm or Gothenburg. 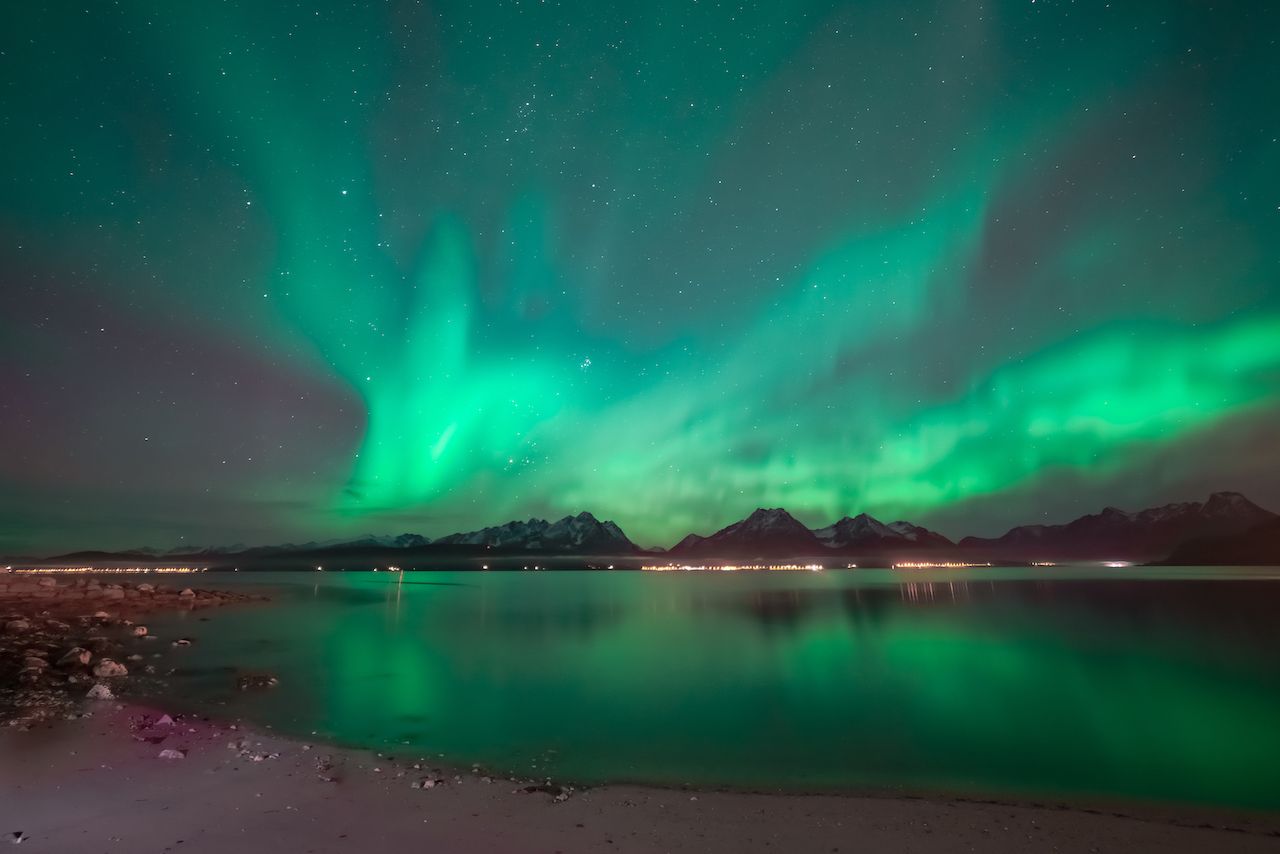 In Norway’s Lyngen Alps, you can take a sailboat to the mountain you want to ski, climb up that mountain, and then schuss down it with views of the sea and fearsome peaks rising up from it. As you hike across through the steep and rugged terrain with your headlamp on, you might get a view of the aurora borealis. Welcome to the life of ski touring the Lyngen Alps, a fjord range in northwestern Norway.

While you may be taking a boat to access certain terrain, that should be up to your guide and where they want to take you. Not only would it be nearly impossible to know where to go without a guide, but backcountry skiing is dangerous.

The region has plenty of hotels and vacation rentals. One standout place is Lyngen Lodge, which offers luxurious, cozy accommodations. Lyngen Lodge’s ski touring guides will introduce you to some of the 60 summits surrounding Lyngen fjord, with altitudes surpassing 4,200 feet. In addition to skiing, Lyngen Lodge offers numerous other wintertime activities, such as dog-sledding, snowmobiling, and cross-country skiing.

The best time for skiing here is from March to April — with plenty of daylight, snow, and milder temperatures — but you can begin skiing here as early as January. At that time of year, you’d be braving wicked cold and dark nights, but the frequently visible northern lights may make up for the weather. By early April, it’s tough to spot the northern lights as there is already too much daylight.

HolidaysFor an Unbeatable Winter Wonderland Holiday, You Need To Go To Finland
Tagged
Astronomy Trip Planning
What did you think of this story?
Meh
Good
Awesome