It’s no stretch to say that sports fans travel from around the world to visit Manchester. For many years, the biggest draw in town was Manchester United, the soccer club that, in the 1990s, cemented an already prestigious history with a decade of Red Devil dominance. It was an era that made icons of players like David Beckham and a destination of the city for football fans the world over. United’s star has waned on the pitch in recent years, but its profile has now been matched by its so-called “noisy neighbours” in blue, Manchester City. Thanks to the investment of a billionaire oil sheikh, City’s success has become a fairytale for fans who once looked on with envy at their red rivals. Nowadays, both clubs remain such giants in world soccer that on any given day you’ll find travelers in shirts of both colors on pilgrimages.

But Manchester is more than just football. England’s third-largest city is also home to world-class sporting venues and teams for games ranging from cricket and rugby league to cycling and ice hockey. If you’re headed to Manchester to catch a fixture for the reds or the blues, or if you’re arriving to pursue a love of something other than the beautiful game, here’s some of the sights, stadiums, and saloons that sports lovers shouldn’t miss.

If you’re going to United 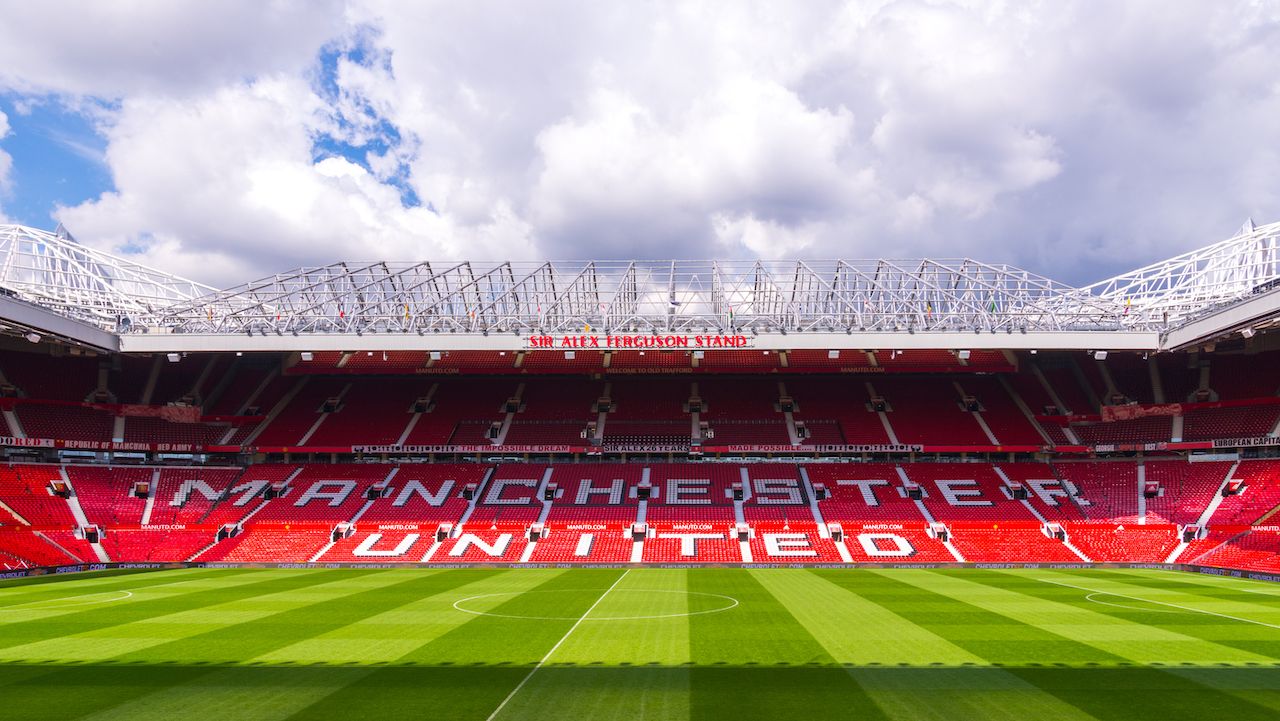 To the true believers, Old Trafford is more a fortress than a sports ground. And, in truth, the Theatre of Dreams is such a big and imposing structure (with a capacity of 76,000) that there’s a reason why it provoked fear in opposing teams for decades. The atmosphere inside when the crowd’s dander is up can be skin-pricklingly exciting; many of the best moments are saved for local derby games and night matches too. If you’re going on a non-match day, the stadium tour takes in the club museum and a wander round the ground. For around $40, you can even add in a spot of lunch at the Red Café. Ahead of games, fans congregate for photos and pre-match chat by the famous statue of the three United Legends: Charlton, Best, and Law.

True fan’s tip: Lou Macari was a favorite player in the 1970s, so it’s fitting that the fish and chip takeaway joint he bought on Chester Road remains a pre-match tradition to this day.

Just a stone’s throw from Old Trafford, the soccer-themed Hotel Football is an upscale spot where it’s possible to stay in sporty rooms and then make your way to the game. Down in Café Football you can also get food that’s a good deal more gourmet than the standard burgers and pies that usually fill soccer bellies. For something a bit more international, try Rock Spice Restaurant & Lounge on Chester Road for Indian specialties.

If you’re going to City 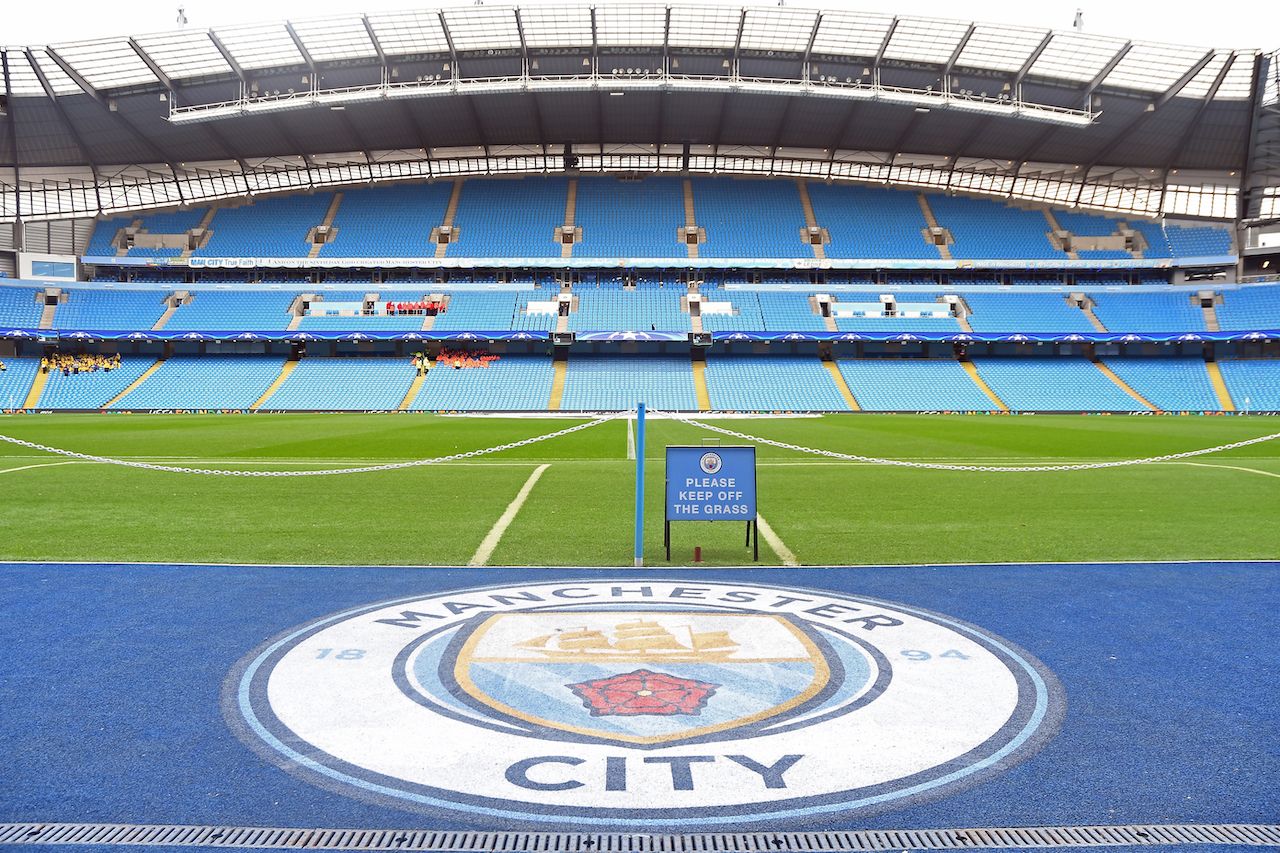 Built for the Commonwealth Games in 2002, City’s stadium is the ultra-modern home the club moved to after its 80-year tenure at the now-demolished Maine Road. If you’re visiting for a tour, plan to spend an hour or so seeing everything from the press room to the pitch for around $30. On matchdays make sure to grab a pre-game drink and mingle with fellow fans at City Square, the designated fan zone outside the ground. There’s always plenty of entertainment on offer before you head inside to watch the action.

True fan’s tip: Just as it is across town, it wouldn’t be matchday for City fans without fish and chips. For the best locally, find your way to Tony’s Stadium Chippy on Grey Mare Lane.

One of the great things about the newly built Etihad is that it’s just a 30-minute walk from the revitalized neighborhood of Ancoats, a place that just can’t stop getting voted as one of the coolest places in the world right now. You’re spoilt for choice when it comes to food and drink options there, but some highlights are the authentic Neapolitan pizza at Rudy’s, the stylish British tapas at Elnecot, and the Asian fusion at Viet Shack. If you’re more in the mood for drinks then The Jane Eyre is a casual neighborhood bar for cocktails while the Crown & Kettle is a traditional, real ale institution.

Other can’t-miss experiences for soccer fans 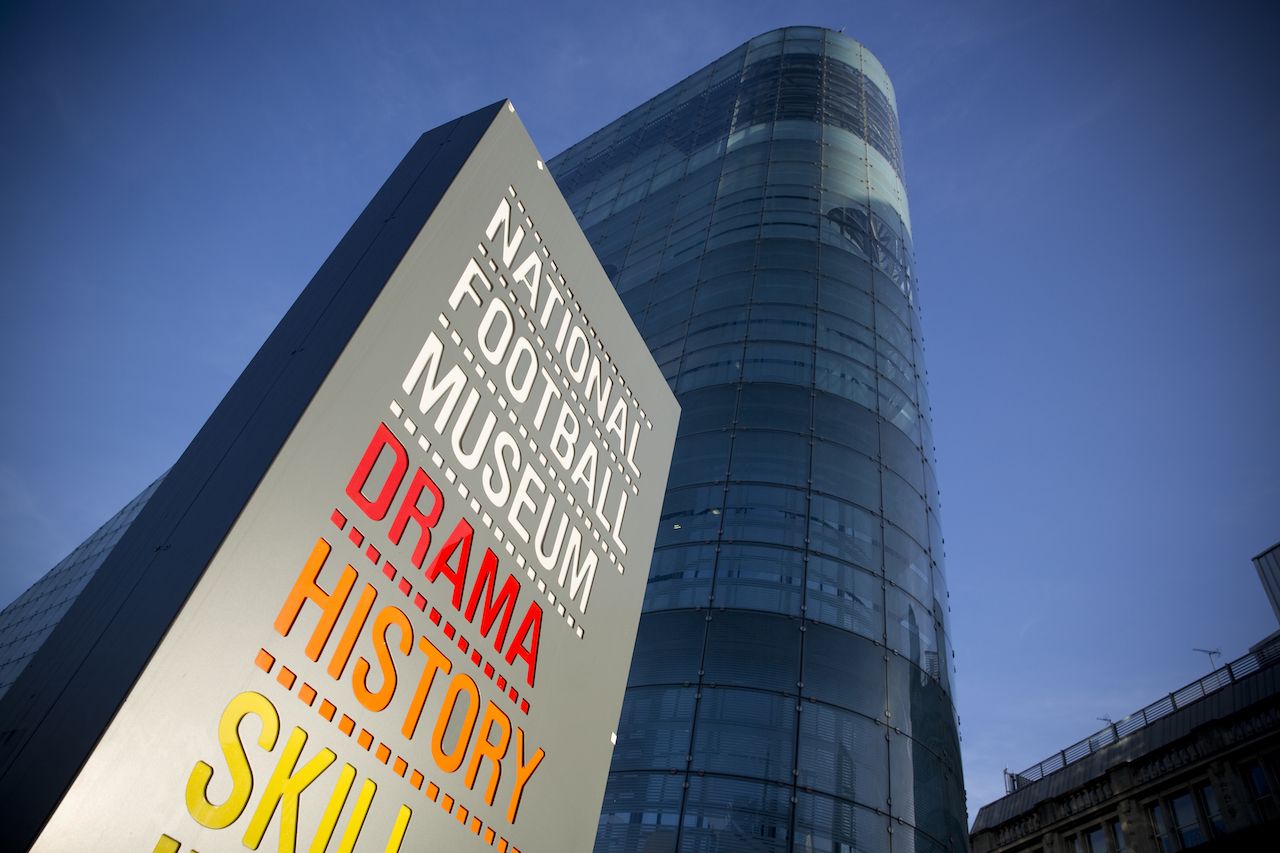 If you want to explore how integral soccer is to the fabric of British life, then the National Football Museum in Manchester city center is the ideal place. You can learn about the history of the game, practice your skills on the interactive exhibitions, and book in for talks and rotating art shows that show different sides of the sport. It’s $12 for adults and $6 for children between five and 15.

The Brotherhood of Pursuits and Pastimes 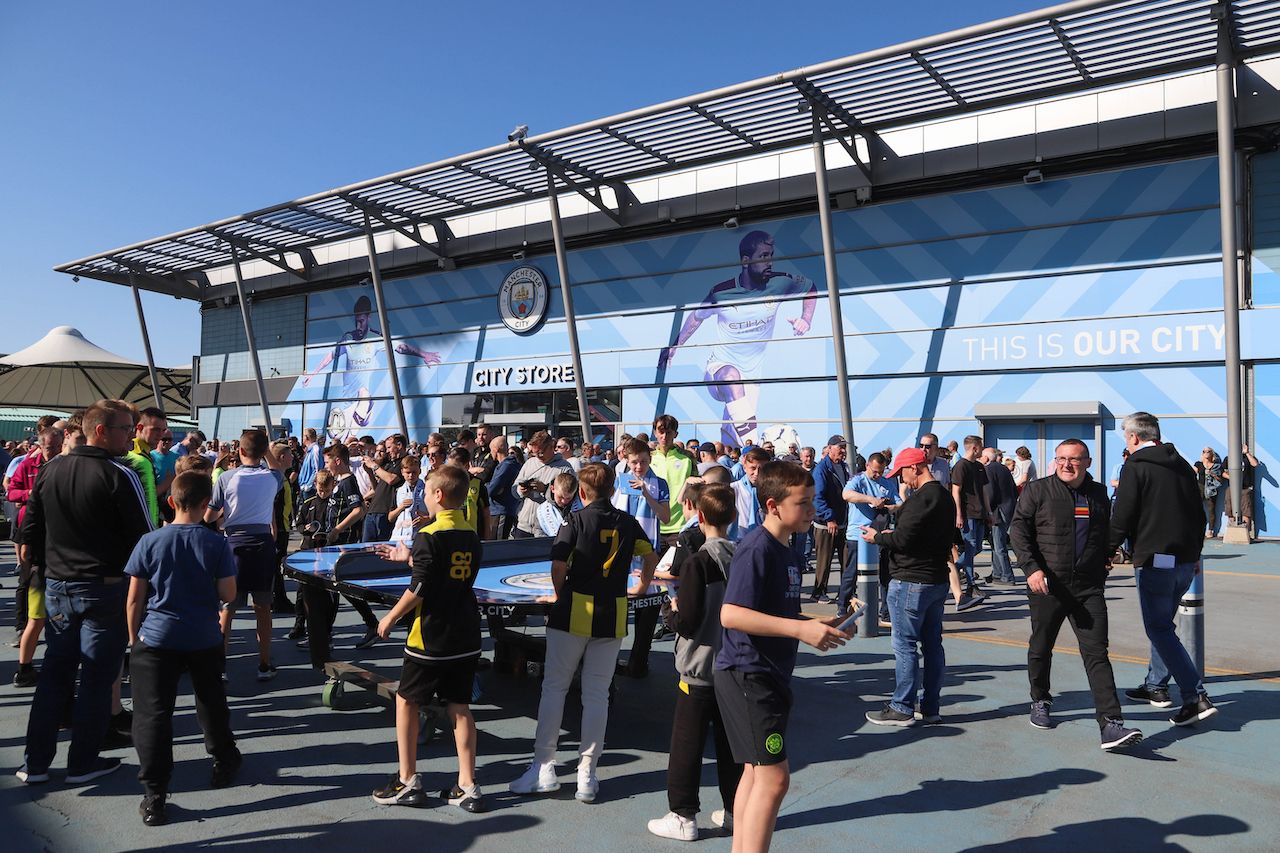 To experience the atmosphere of a game without actually attending one, see the action on the big screen at The Brotherhood near Albert Square. In addition to showing all the live games, this bar plays just about every other sport you can imagine and puts out an American-style menu of burgers and wings. If your team turns out to be a loser then you can regain some pride over bouts of pool, darts, and table tennis. 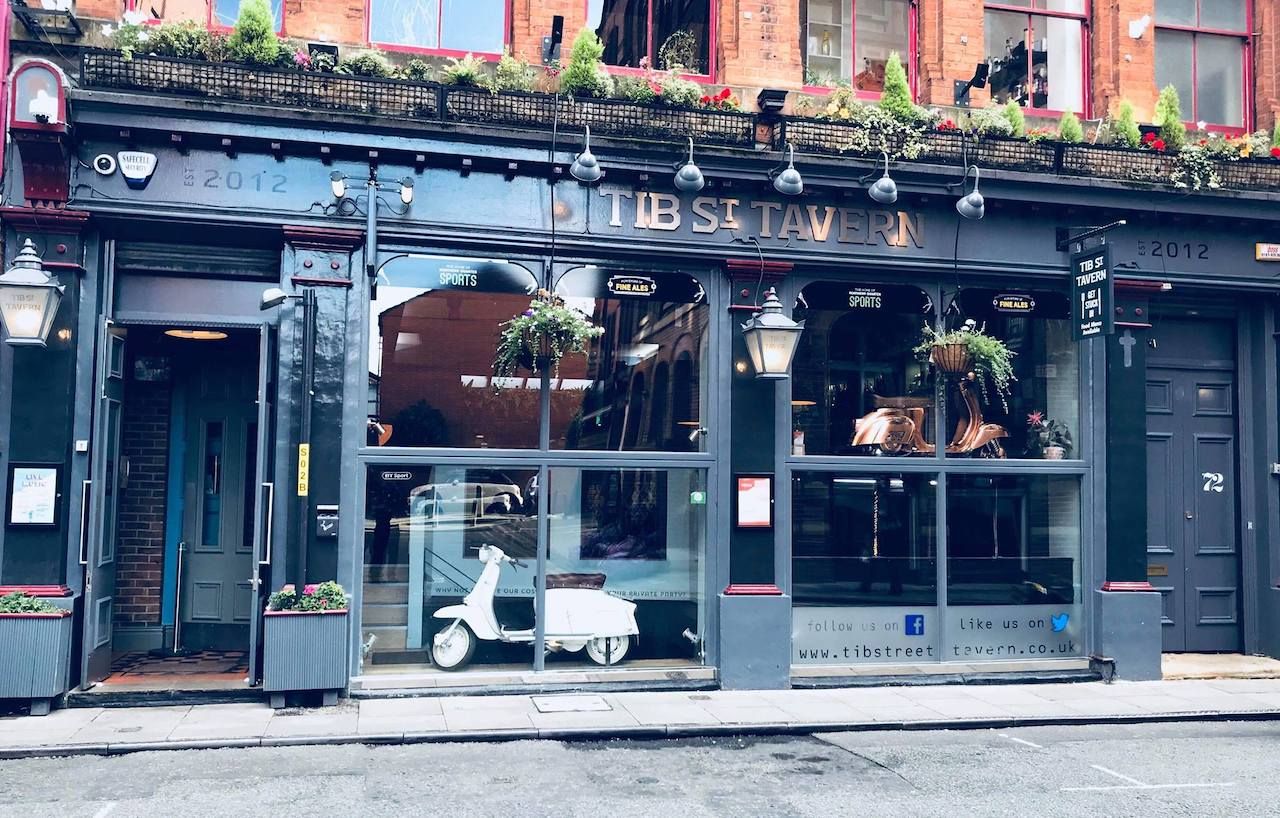 More of a classic English pub than a sports bar, nonetheless, the Tib Street Tavern is known throughout the city as a go-to place for live events. They show a full schedule of matches in a fully restored building that was once a shipping merchants’ office. They specialize in IPAs and global lagers, with an extensive menu of both. Food-wise, you can fill up on sandwiches and bar snacks, or you can bring some buddies and opt for one of the sharing combos.

Beyond the beautiful game 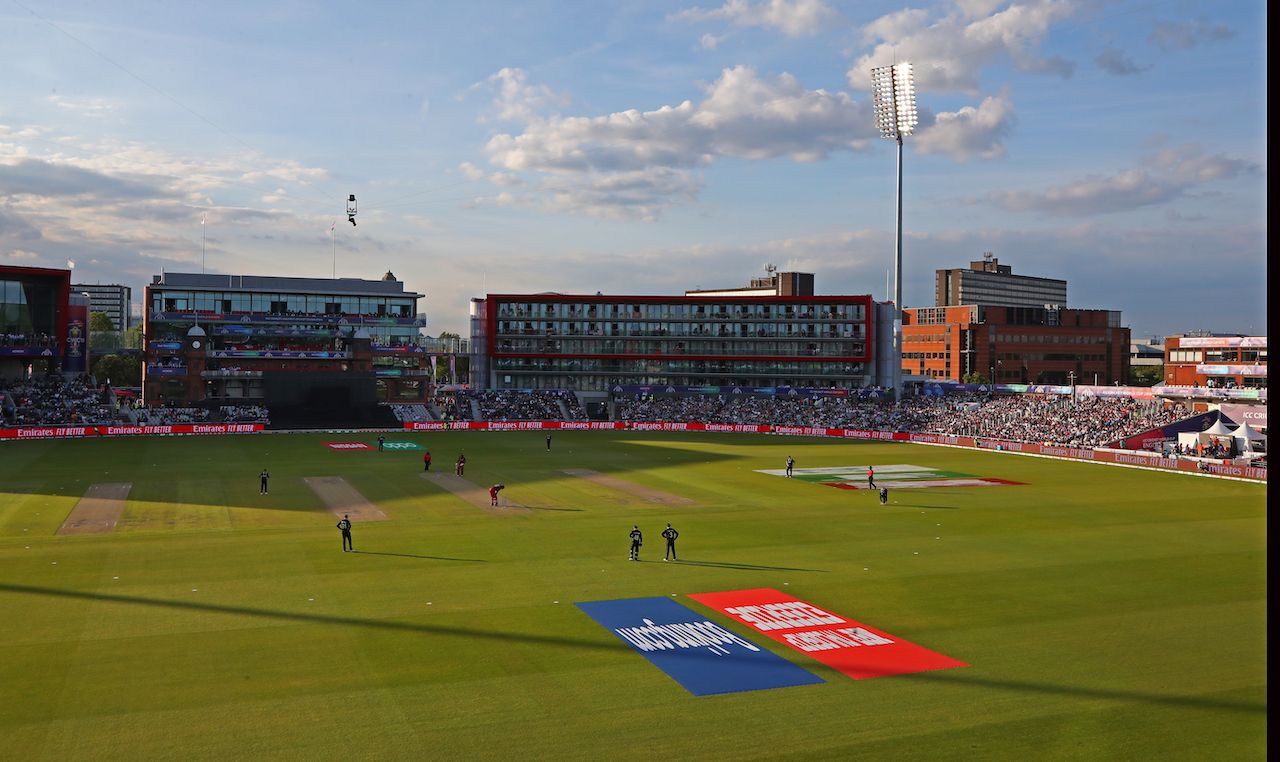 There’s plenty to see for sports fans who want to go further than football, so check out the venues below to see if any of the upcoming events can tempt you to try something different.

A short walk from Manchester United’s home stadium is the famous cricket ground, which is also called Old Trafford. There are a few international games for the England team each year, but they are infrequent and sell out well in advance. Much better for tourists is to aim for the domestic county cricket season (between March and September), when you’ll find regular matches for home county, Lancashire. If you’re a cricket novice then what you need to know is that there are three main forms of the game at this level: three days, one day, and the T20 games, which take around three hours and are probably best for newbies.

If you like your sporting action on wheels rather than feet, the National Cycling Centre, walking distance from City’s Etihad Stadium, may be for you. Originally constructed as a state-of-the-art velodrome in 1994, the complex has now been added to so that it also has links to local BMX and mountain bike facilities and can truly claim to be one of the most important centers for cycling in the world. As the home track for multiple Olympians and Tour de France winners, the velodrome is a great place to go and watch elite cycling events, but if you’re more hands on, you can also book ahead to get an experience of what it’s like to don the lycra and ride the boards.

For something completely different (considering they don’t get much ice in Manchester), try a trip to see the city’s finest slap shot specialists, Manchester Storm. The resident ice hockey team plays its home games out at Planet Ice in Altrincham, which is a 20-minute tram ride on the Metrolink. Although ice hockey isn’t hugely supported in the UK, Manchester teams have historically been among the most popular, and when the club played its games at the Manchester Arena, it broke the British attendance record with over 17,000 fans. The season runs from September to March, and games are most often played on weekend evenings.