St. Augustine, on the coast of northern Florida, is the oldest continuously occupied European settlement in the United States. This town of about 15,000 has a rich and complicated history that’s reflected in its handsome architecture and dining options shaped by the city’s diverse cultures. St. Augustine also offers options for water sports, historic tours, ghost and pirate lore, and exotic animal encounters — all of which make this picturesque city just an hour south of Jacksonville the ideal place for a weekend visit. 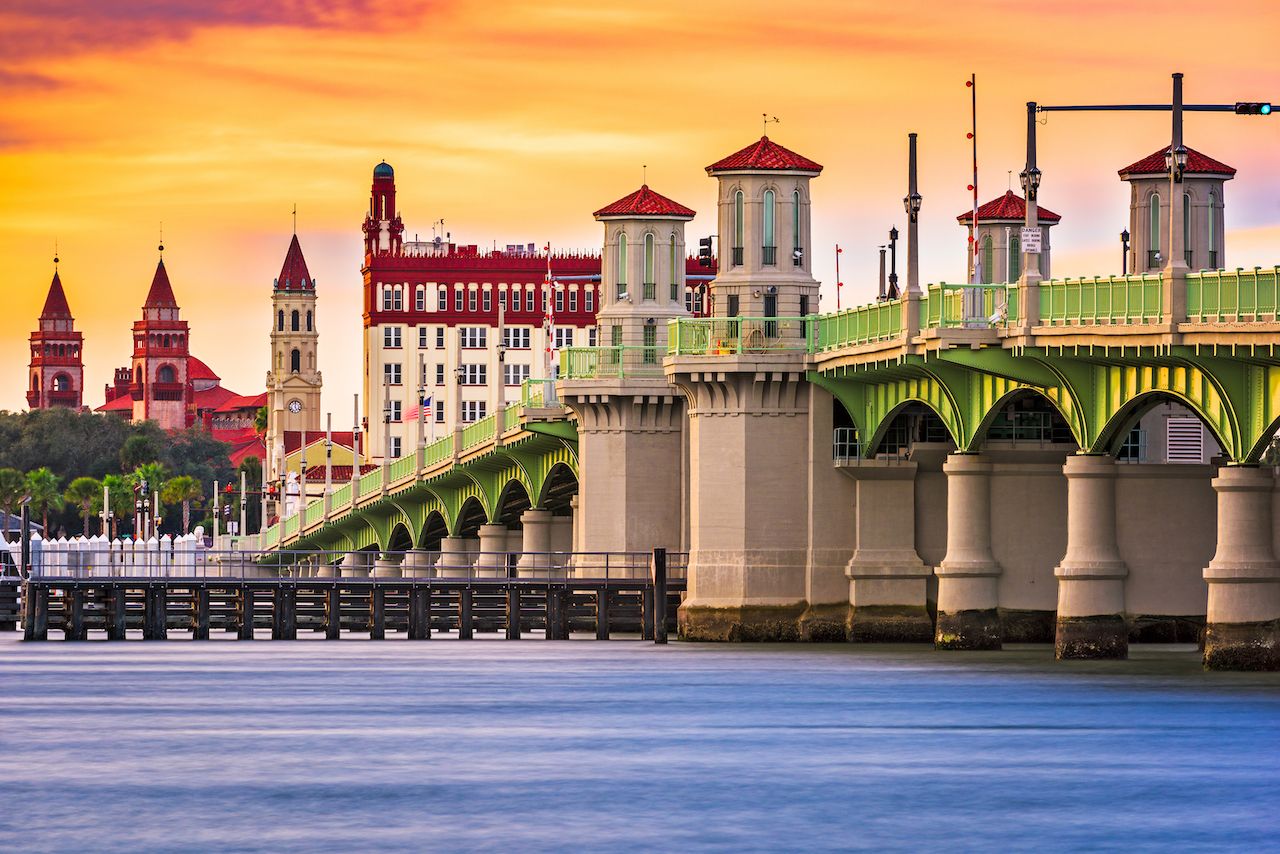 St. Augustine doesn’t have a commercial airport, so if driving from home isn’t an option, you’ll have to fly into Jacksonville or Orlando and rent a car. Jacksonville is the closer of the two cities; Orlando is just under two hours south. We flew into Jacksonville, hopped into a 2020 Chevy Blazer to comfortably stash all of our luggage plus any souvenirs we’d collect along the way, and headed south to St. Augustine. Once in town, it’s necessary to drive or take a rideshare between the beach and historic district. The best course of action is to tackle one area per day, allowing you to walk between the attractions you want to see. If you’re going out bar-hopping in the evening, it’s easy to get a rideshare back to your hotel. 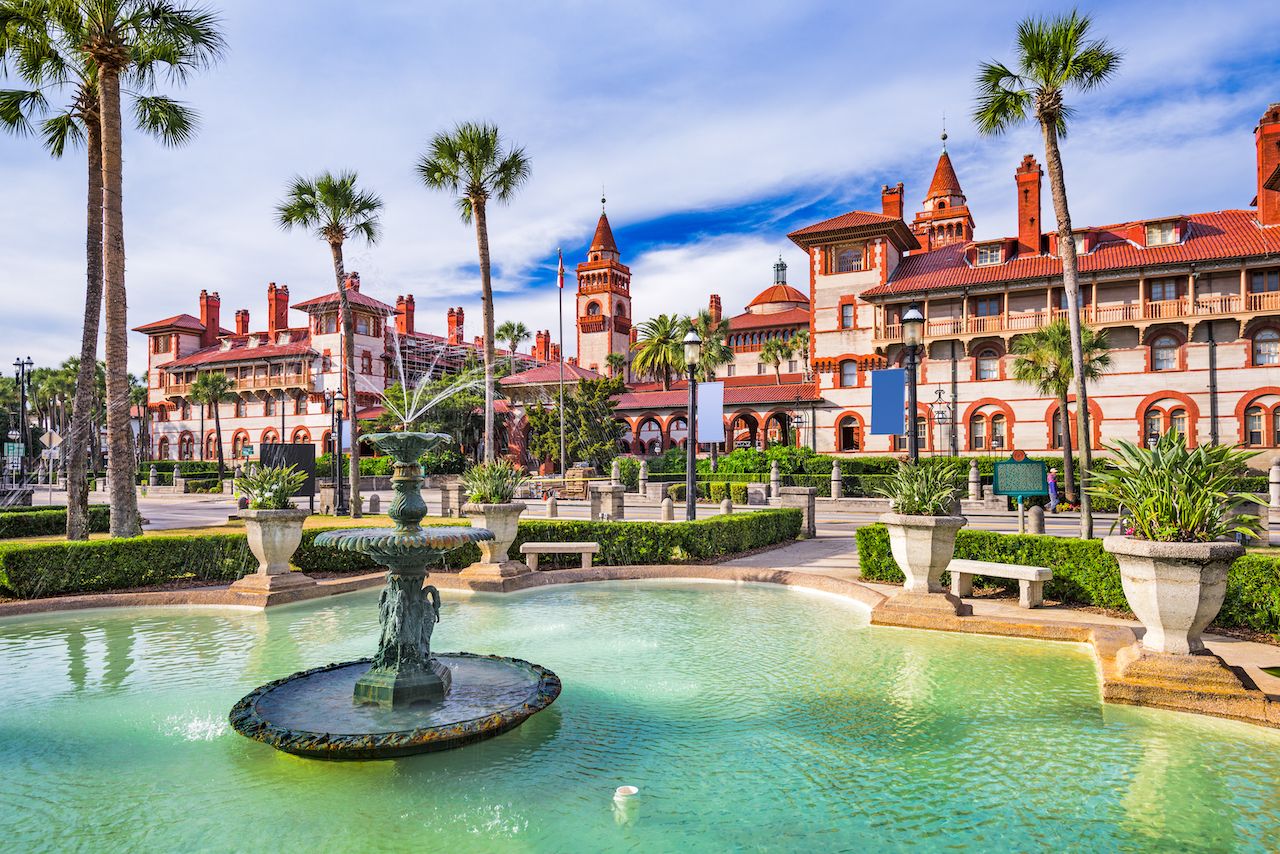 Florida is 5,000 miles from the Mediterranean Sea, but nowhere in the south combines Euro-influenced architecture with beachy, coastal Floridian hospitality quite like St. Augustine. The architecture is as much a part of the show here as the beaches, starting with the Villa Zorayda Museum. Built in 1883 as the winter residence of hardware merchant and author Franklin W. Smith, this magnificent structure is a sight to behold, both inside and out. The Moorish Spanish revival museum includes architectural details borrowed from the Alhambra Palace in Granada, and it was built using Smith’s unique construction method: poured concrete and crushed coquina shells. The gilded, colorful interior is teeming with priceless antiques, including a sacred rug made from cat hair that’s more than 2,400 years old. The self tour of the museum takes about 45 minutes, and you can also reserve a docent-led guided tour in advance.

Another architectural hub is Flagler College, just off King Street across from the Villa Zorayda Museum. This private college boasts one of the most historically beautiful campuses in the country. The structure, planned and designed in part by oil mogul Henry Flagler, was finished in 1888 when it opened as the Hotel Ponce de Leon, an accommodation that was much needed in St. Augustine at the time. The building’s Spanish Renaissance style was, and still is, considered an architectural and engineering marvel.

Tours of the Flagler College campus, which include a comprehensive history of the buildings and grounds, take place every day at 10:00 AM and 2:00 PM. The afternoon tour allows you to do both the museum and college in the same day. Afterwards, sneak across the Bridge of Lions for a drink at Sarbez!, which serves up local craft beer and wine and a huge list of grilled cheese sandwiches. If you go on an evening with live music, expect it to be awesome but very loud.

If you’re a true architecture buff, book your overnight at the Casa Monica Resort & Spa, located in the center of St. Augustine’s Historic District within walking distance of many attractions and restaurants. The decor of the 1888 structure draws on Spanish Baroque Revival and Moroccan styles, although the building served not only as a hotel but also as a county courthouse. Another good place to stay in the bustling Historic District is the DoubleTree by Hilton Hotel, as it has a convenient location and amenities like a shuttle, which is helpful should you need a lift back after an evening on the town. 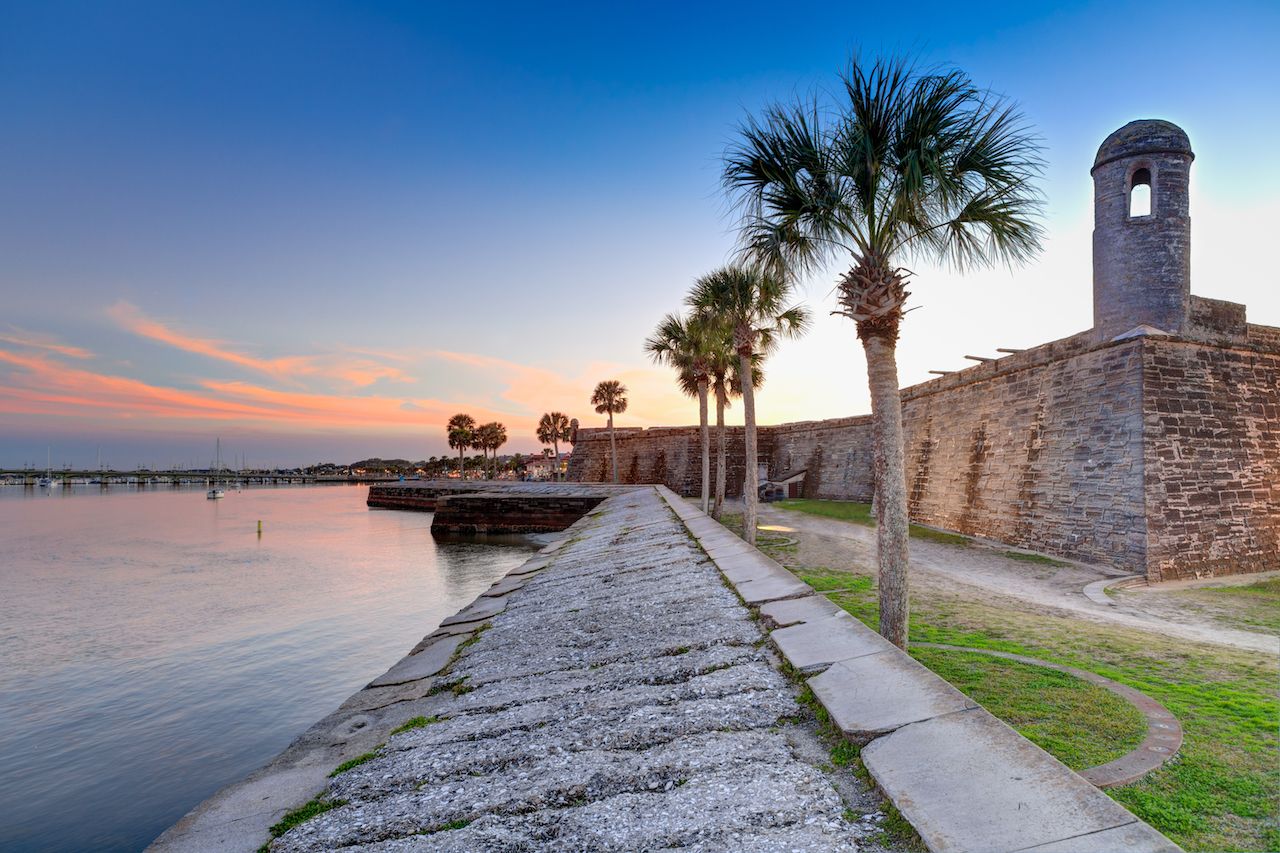 Castillo de San Marcos was finished in 1695, which makes it the oldest masonry fort in the continental United States and the oldest structure in St. Augustine. The fortress was built by the Spanish to protect their claims in the New World, and when it came under fire by British troops for the first time in 1702, enemy forces were unable to penetrate its walls. Today, you can explore the many nooks and crannies of the fort, watch cannon firings, and learn about its long and complicated history from the many experts on site. The roof also offers a great view of the city and the water, so try your best to go on a clear day.

The town’s Colonial Quarter also offers live demonstrations along with plenty of boutique shops to peruse. Located along a stretch of St. George Street, this historic area is lined with storefronts, restaurants, bars, and museums. Along the route, you can catch a concert, watch a live musket demonstration, learn about blacksmithing, and shop wares from a variety of local artisans and businesses. After you’ve worked up an appetite, grab a bite at Columbia, a gorgeous Cuban and Mexican restaurant with a huge menu, or Prohibition Kitchen, a gastropub serving locally sourced fare.

Experience the living, the dead, and the water 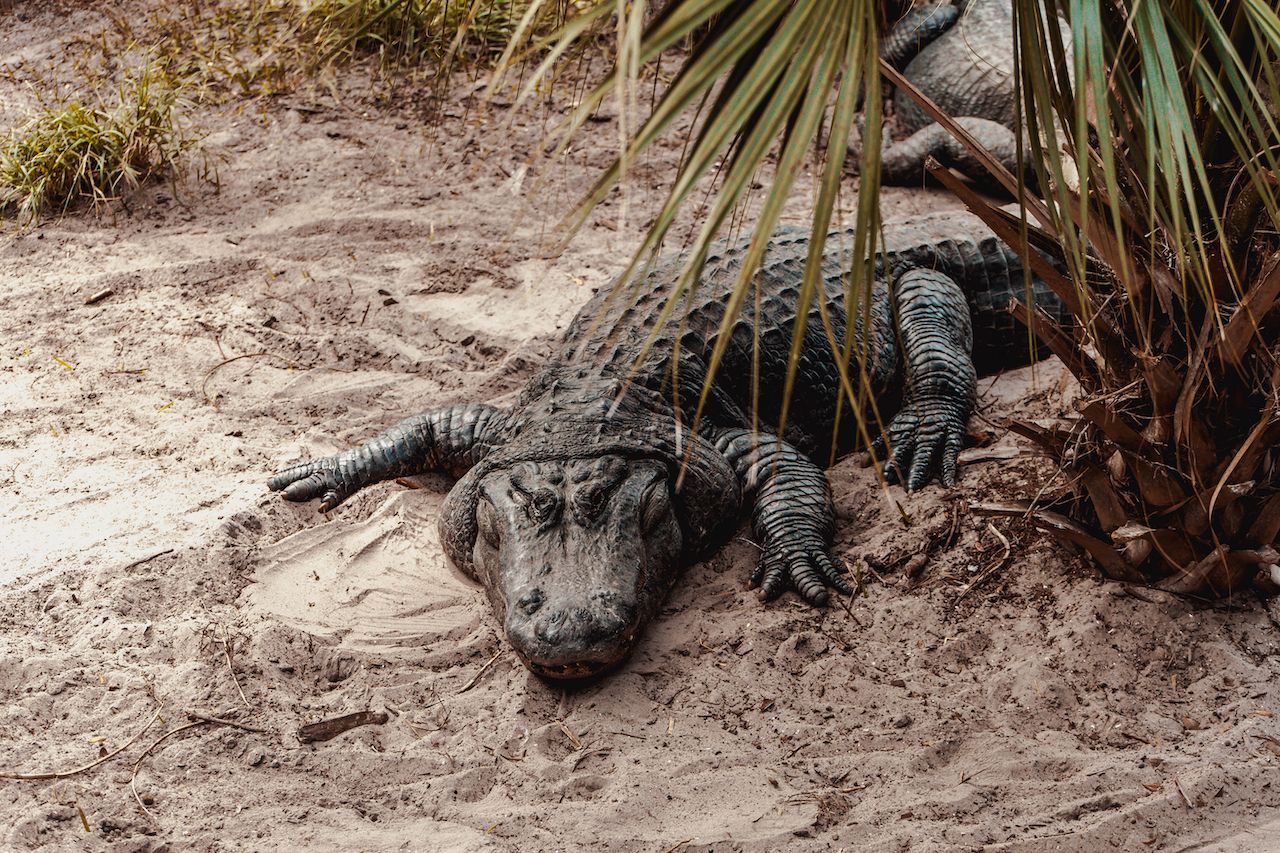 The St. Augustine Alligator Farm Zoological Park has been open for more than 100 years and is a leader in the species’ conservation. Here you can get up close and personal with reptiles, including the critically endangered orinoco crocodile and endangered Malaysian giant pond turtle, along with lemurs, monkeys, and exotic birds like the blue-throated macaw. You can even explore a python cave or zipline over the zoo if you’re looking for an edgier experience.

There’s also the option to take a guided ghost tour. Guided by professional storyteller Dion Moore, this small group walking tour combines the history and legends of the oldest US city into one freaky evening. Moore will take you to several supposedly haunted landmarks like the Oldest Wooden Schoolhouse, the Huguenot, and Tolomato Cemeteries, an old funeral parlor, as well as the ghostly St. George Inn. Whether you believe in the supernatural or not, the tour portrays the spine-tingling history of St. Augustine.

To mellow yourself out after the ghost tour, head over to the Intercoastal Waterway. Here, Raging Water Sports hosts guided water tours from the Matanzas River to the south and Tolomato River to the north. Jump on a jet ski or rent a motorboat to take advantage of bright sunny days where you can tour Guana State Park and the city’s historic bayfront. Expect gorgeous views and some wildlife sightings, like pelicans, ospreys, bottlenose dolphins, and even manatees in the summer months. 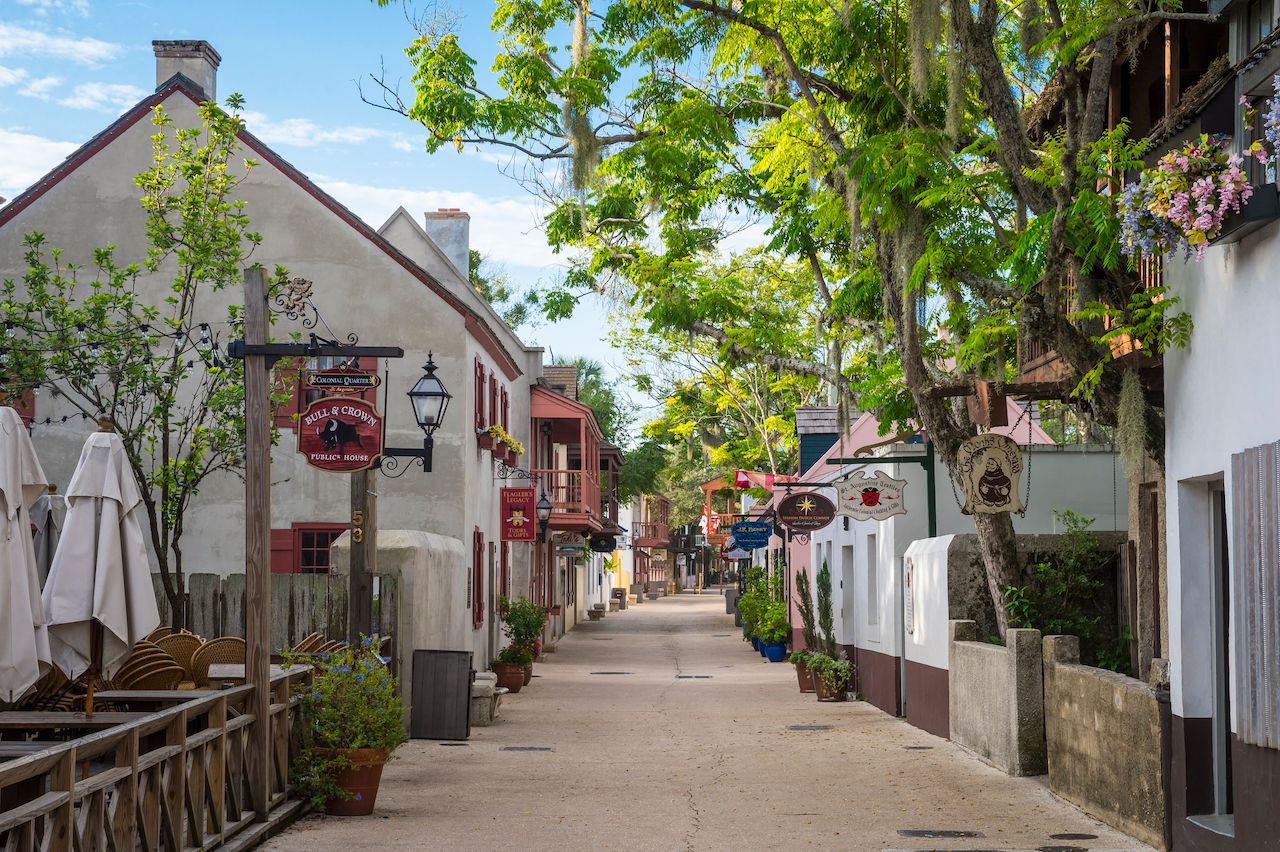 Dining along Florida’s northern coast is about more than barbecue and fried fish. The cuisine of St. Augustine, in particular, has a distinctly European flair to it, led by Costa Brava. Located inside the Casa Monica Resort & Spa, this semi-formal restaurant infuses Mediterranean flavors with Spanish-style tapas plates. Order an expertly made martini or spicy margarita from the bar before diving into the food menu, meant to be shared among large tables. Start with a perfectly cooked plate of Florida white shrimp seasoned with garlic, olive oil, and adobo spice, or try the Hunter’s Board, piled high with Spanish cheese, charcuterie, nuts, and olives.

Another option popular among locals and regular visitors is the Ice Plant Bar. This stunning bar and restaurant is housed in a former ice plant in a building that dates back to 1927. Look up when you enter because you can still see the crane rails above the bar that used to lift huge blocks of ice to be broken down for customers. Now that gorgeous ice is used to chill the establishment’s signature cocktails like the Mazzy Star, which is mixed with vodka, Absentroux (an absinthe liqueur), falernum, grenadine, and lemon. The food here is excellent too, especially the homemade potato chips and Fancy BLT. When you’re done eating and drinking, head downstairs and take a tour or tasting at the connected St. Augustine Distillery.

The town’s best vegetarian meal is found at Sprout Kitchen. Located on a charming side street off the Colonial Quarter, this plant-based cafe and juice bar is a perfect place to stop in for breakfast or lunch. Inside the sunny space, you’ll find a variety of fresh, cold-pressed juices, smoothies, vegan and gluten-free baked goods, and savory dishes like a delicious Caesar salad with crispy chickpeas. Don’t miss the avocado toast topped with killer coconut “bacon,” pink salt, and cayenne pepper.

Beaches and IslandsBiscayne National Park is the perfect day trip from Miami
Tagged
Culture Art + Architecture Trip Planning
What did you think of this story?
Meh
Good
Awesome