St. Patrick’s Day may seem to be fairly limited to Europe and the United States, but Tokyo’s Irish (and Irish-loving) contingent would beg to differ. The St. Patrick’s Day Parade and I Love Ireland Festival that fall side by side over a mid-March weekend in Tokyo every year claim to be the largest collective St. Patrick’s Day celebrations in Asia. Over the past few years, they’ve also gained traction as some of Tokyo’s most popular and indulgent spring fetes. Among Japan’s manifold idiosyncratic behaviors, the seriousness with which it treats festivals is near the top; the St. Patrick’s Day parties are no different, receiving the full kitchen sink of Irish celebratory trimmings and Japan’s irreverent penchant for spectacle. 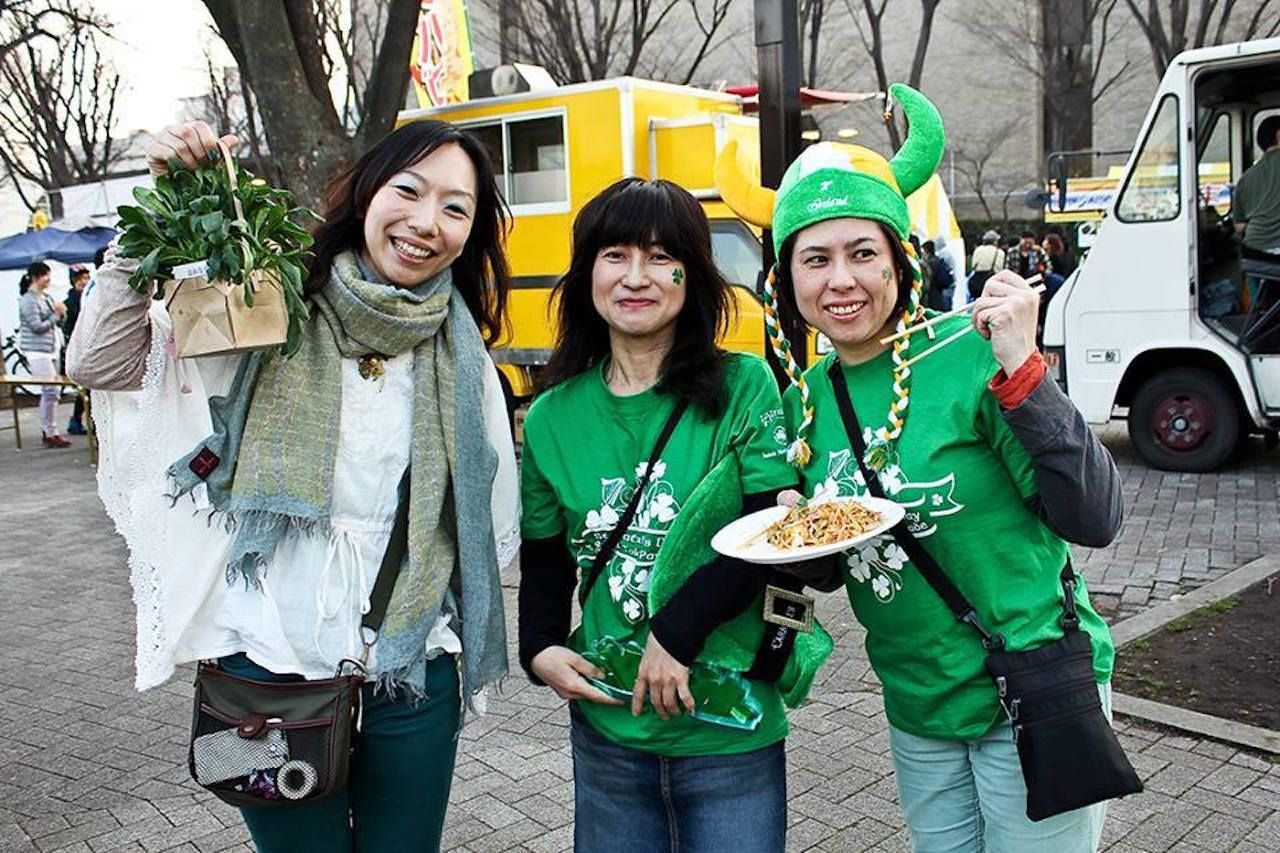 Tokyo’s St. Patrick’s Day celebrations take place over a weekend close to March 17 (it varies each year depending on when the day falls). Saturday and Sunday see the I Love Ireland Festival consume the event square at Yoyogi Park, and the two-hour Sunday St. Patrick’s Day Parade runs along Omotesando’s glamorous high street, just a short stroll away. Well over 100,000 people flock to the events annually, which to me, is a striking curiosity. I hail from Belfast, and the thought of a yearly Japanese celebration attracting crowds in Ireland of such numbers is unimaginable — the disagreeable Northern Irish weather notwithstanding. But in Japan, festivals are treated with near reverential respect, regardless of whom is being honored, and St. Patrick and his trusty band of Tokyo-based followers are the beneficiaries. 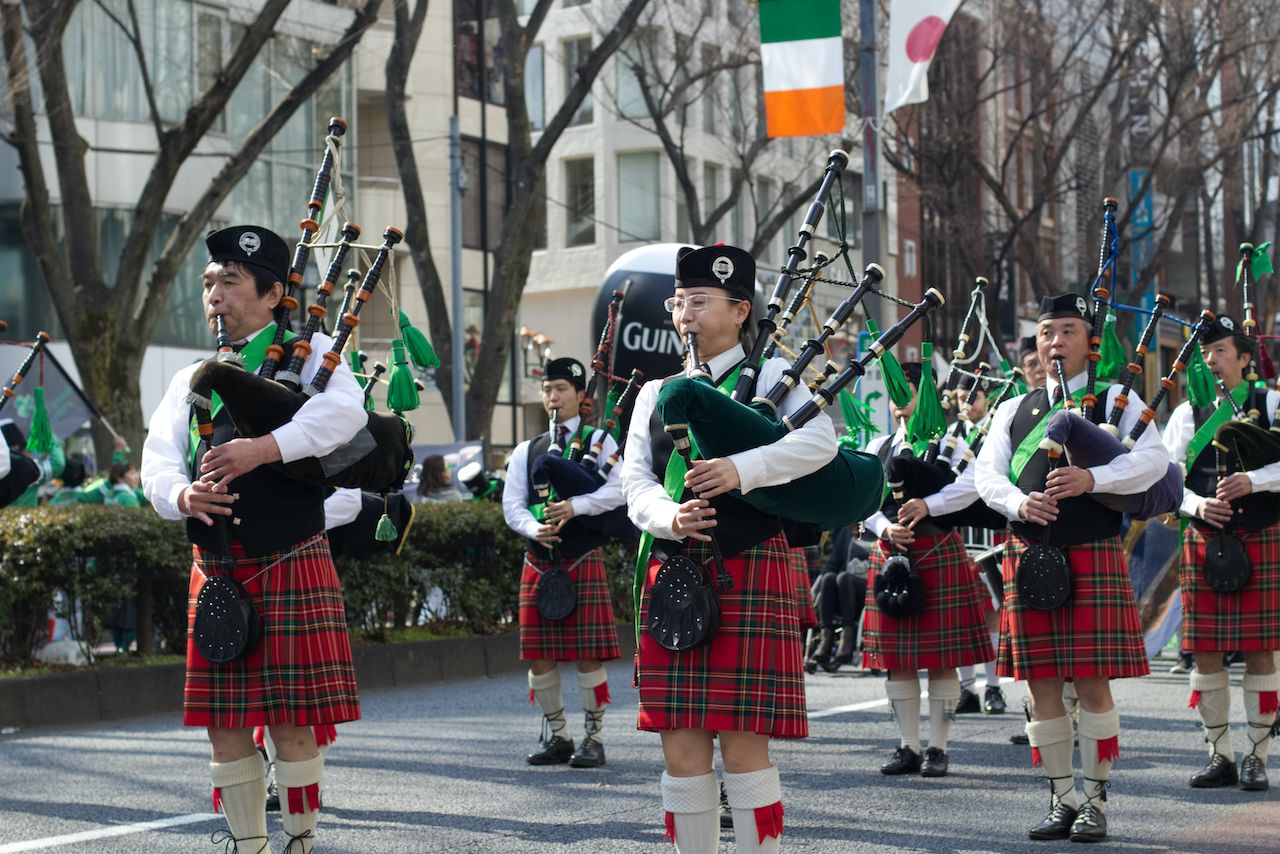 Tokyo’s St. Patrick’s Day Parade, organized by volunteers at the Irish Network Japan, far outweighs the gravitas or attention to detail of commemorative saintly festivals in Ireland. The procession features marching musical troupes, dancers costumed like warrior princesses, Miss World contestants from Ireland and Japan, and the Tokyo Pipe Band belting out an accomplished rendition of the Irish national anthem, “Amhrán na bhFiann” (The Soldiers’ Song). The band delivers its performance clad in kilts and puffing into bagpipes, which, although commonly associated with Scotland, also have historical links to Ireland. 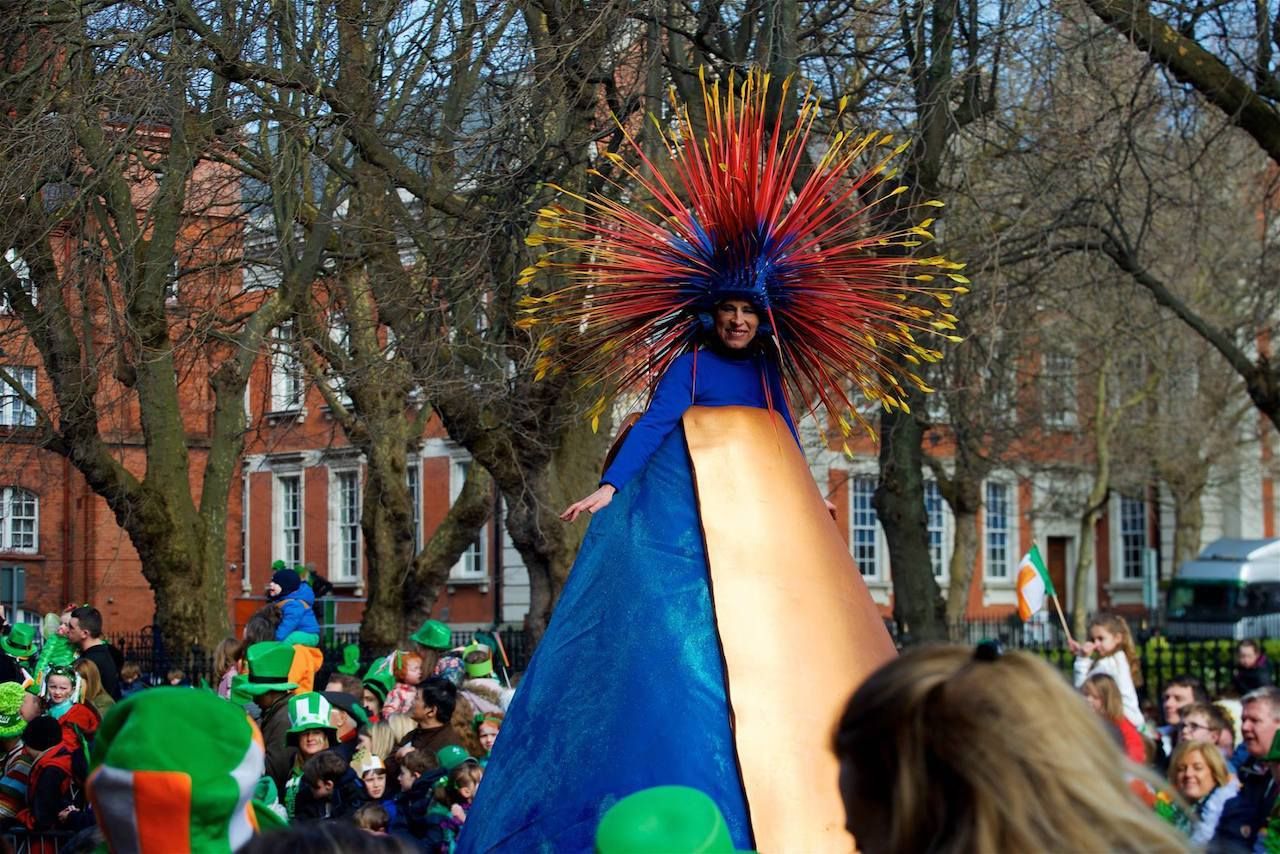 Being Japan, there are elements of wackiness that seep into the parade: a pack of red setters dressed in garish green hats, people wearing blow-up pint costumes standing 20 feet tall, and something that could only be accurately described as improvised Japanese-Irish-samba in high heels. This unique combination of Irish cultural underpinnings with Japanese choreography is arguably the parade’s most endearing quality.

The I Love Ireland Festival 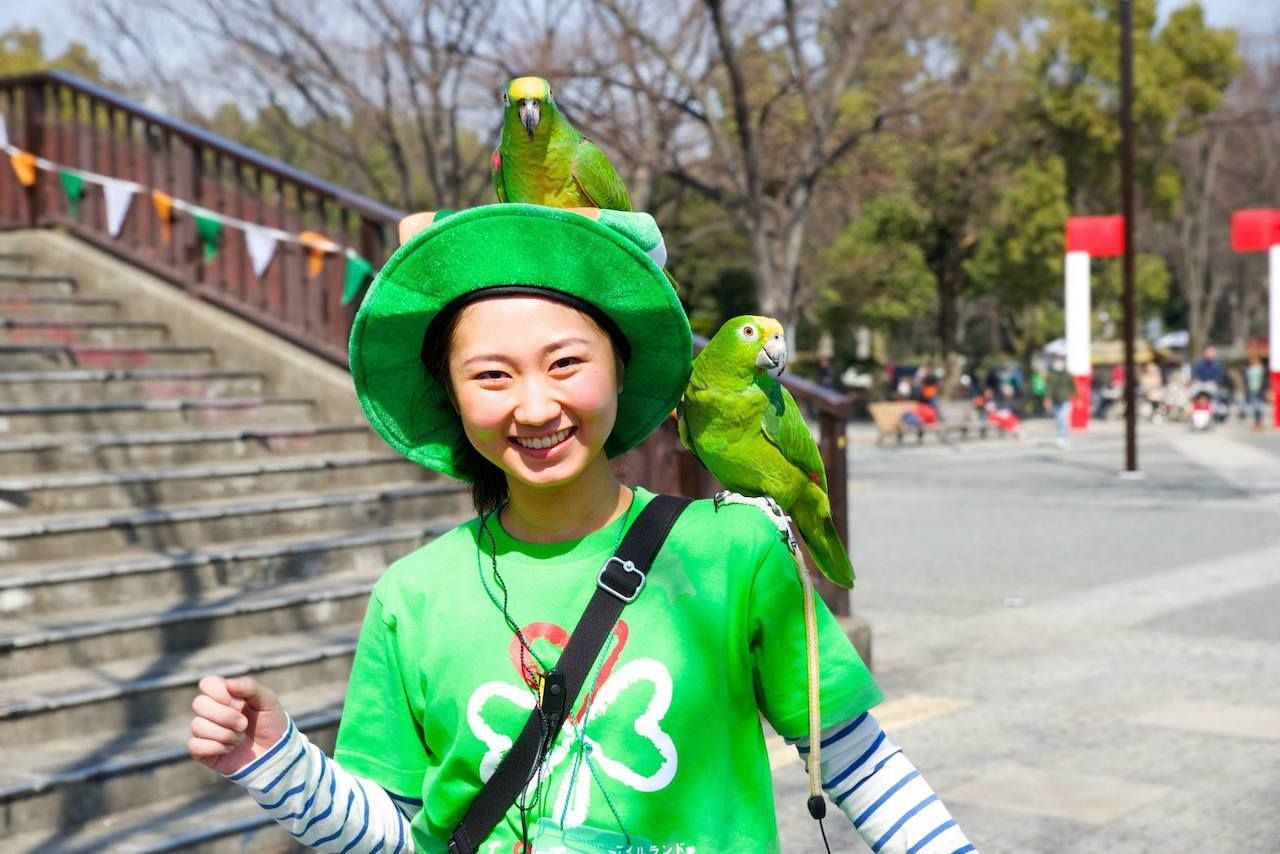 The I Love Ireland Festival, underwritten by the Tokyo-based Irish Chamber of Commerce, is as scrupulous as the parade in its attention to detail. In a plaza surrounded by parkland near Harajuku Station, pop-up pubs pour hearty pints of the “black stuff” (Guinness) and emerald green beer, the meaty smell of Irish grub wafts from a colorful riot of food stalls, a host of traditional instruments fill the air with Celtic folk sound, and there are more ginger-bearded costumes on display than you could shake a shillelagh at. Marquee guest musicians also take to the main stage over the course of the weekend, with past performers including Irish singer-songwriter Mundy and the Lady Chieftains (a Japanese-Irish traditional band).

The festival is also not without its Japanization however, serving as an introduction to some hybrid forms of Japanese-Irish culture. You may be partial to a pint of Guinness, have devoured more than your fair share of stew, maybe you could even say what fairies, bodhrans, and potato bread are, but, have you ever had the pleasure of leprechaun hair food sticks, tri-colored candy floss, or shamrock-printed kimonos?

Always expect the unexpected at the I Love Ireland Festival.

The future is green 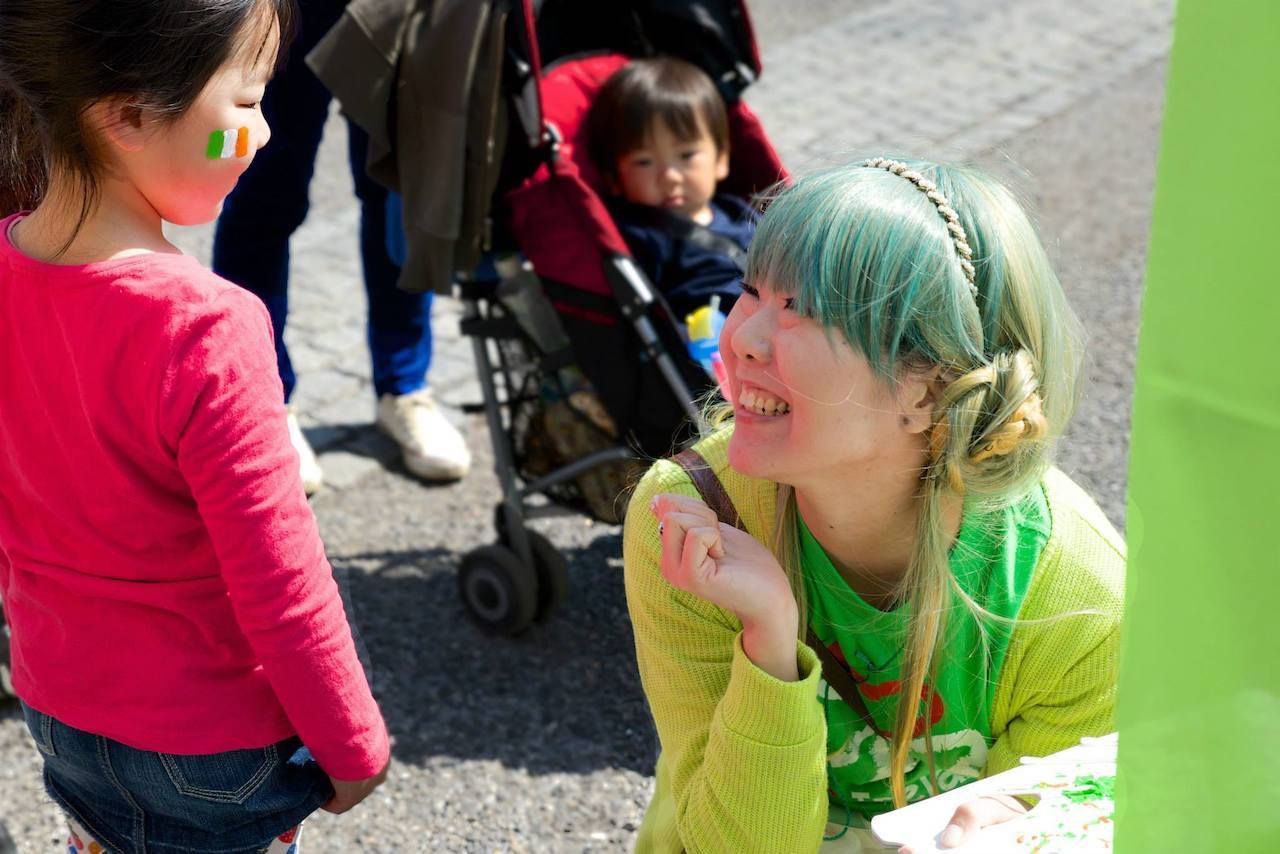 In 2018, then Ambassador of Ireland to Japan, Anne Barrington, said, “From small beginnings, the I Love Ireland Festival has grown to become the biggest forum for Irish and Japanese people to mingle and celebrate everything that is best about Irish music, food, and dance.” Together with the St. Patrick’s Day Parade, it makes Tokyo a highly entertaining place to be in mid-March. And as Tokyo’s tourism numbers and expat population continue to grow, the Irish celebrations are set to do so too.