Tokyo is not an easy place to define. Even “metropolis” sells it a little short. In reality, it’s a megalopolis; a densely packed and towering urban sprawl home to over 38 million people. Yet in spite of Tokyo’s sheer size and scale, the same neighborhoods draw in tourists like the inexorable forces of gravity. While marveling at Shibuya Crossing or exploring the pop-culture towers of Akihabara are worthwhile endeavors, there’s a lot more to the Japanese capital. Venturing into less charted territory you’ll find plenty of equally great neighborhoods which have managed to slip under the radar of Tokyo’s tourism sphere. Here are five of the best. 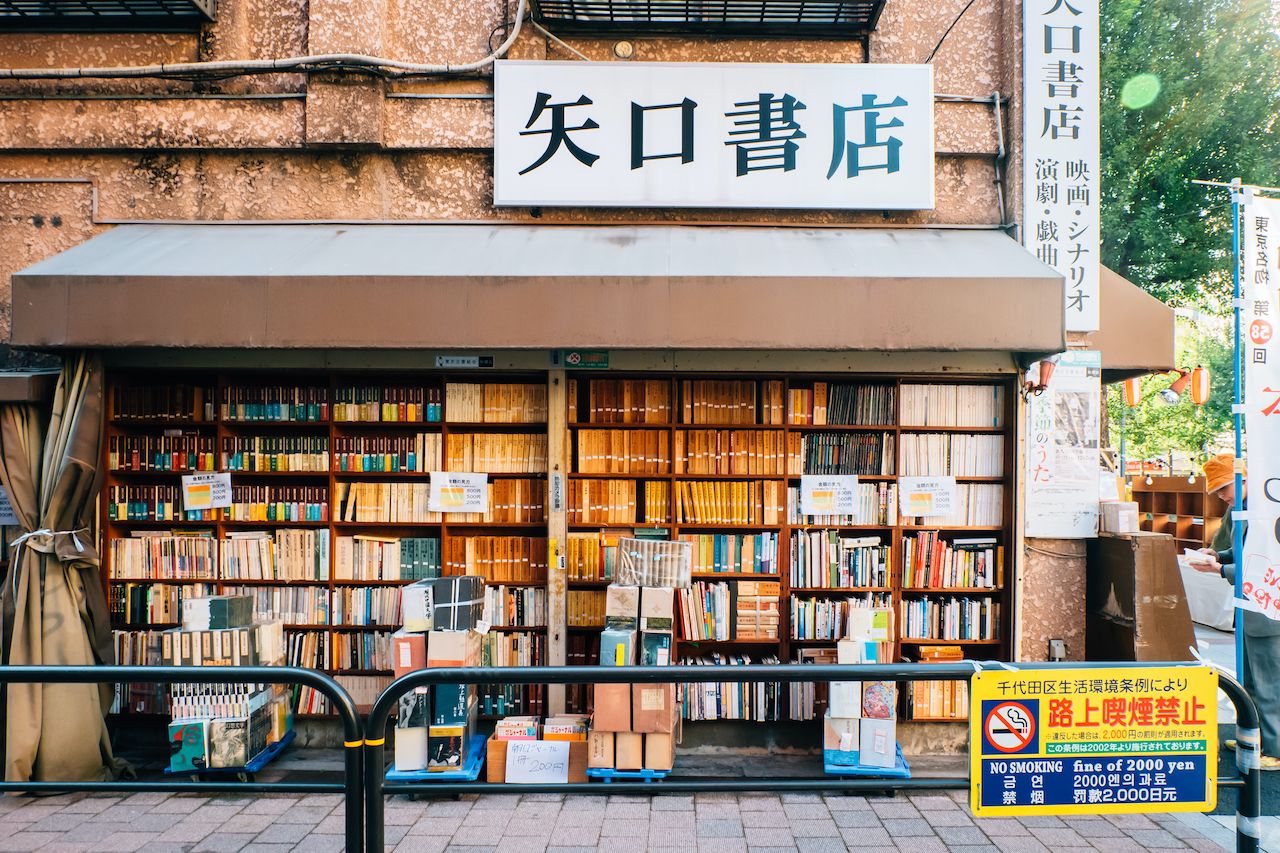 Jimbocho is Tokyo’s town for bibliophiles. The neighborhood, home to the prestigious halls of Meiji University, is famed in local circles for its dedication to preserving the printed word. Pedestrianized streets shooting off from the main thoroughfare, Yasukuni-dori, are lined from top to bottom with old-school book stores (as much as 200 according to some folks), some of which have been in business since the late 19th century. The oldest, Takayama Honten, was established in 1875 and specializes in books on kyogen and noh theater.

Naturally, a lot of the stores are filled with old Japanese academic tomes that are dog-eared, falling apart at the seams, and weighing down the rickety shelves. But while certainly outnumbered, English books have far from dissolved into anonymity.

Kitazawa Shoten is a wonderful establishment in which to peruse the shelves. It’s an antiquarian bookstore selling a host of second-hand books — mostly classic English literature — in its ornate and lofty hall. Accompanying these are rare first editions which you can read under lamplight at varnished, mahogany tables. @Wonder, a graphic novel and magazine store, operates at the opposite end of the spectrum, peddling cheap Marvel, DC, and obscure retro superhero comics from the ‘70s and ‘80s.

The best time of year to visit Jimbocho is during the 10-day Kanda Used Book Festival in late October/early November, where all the shops spill out onto the streets, selling their bountiful wares for reduced prices. 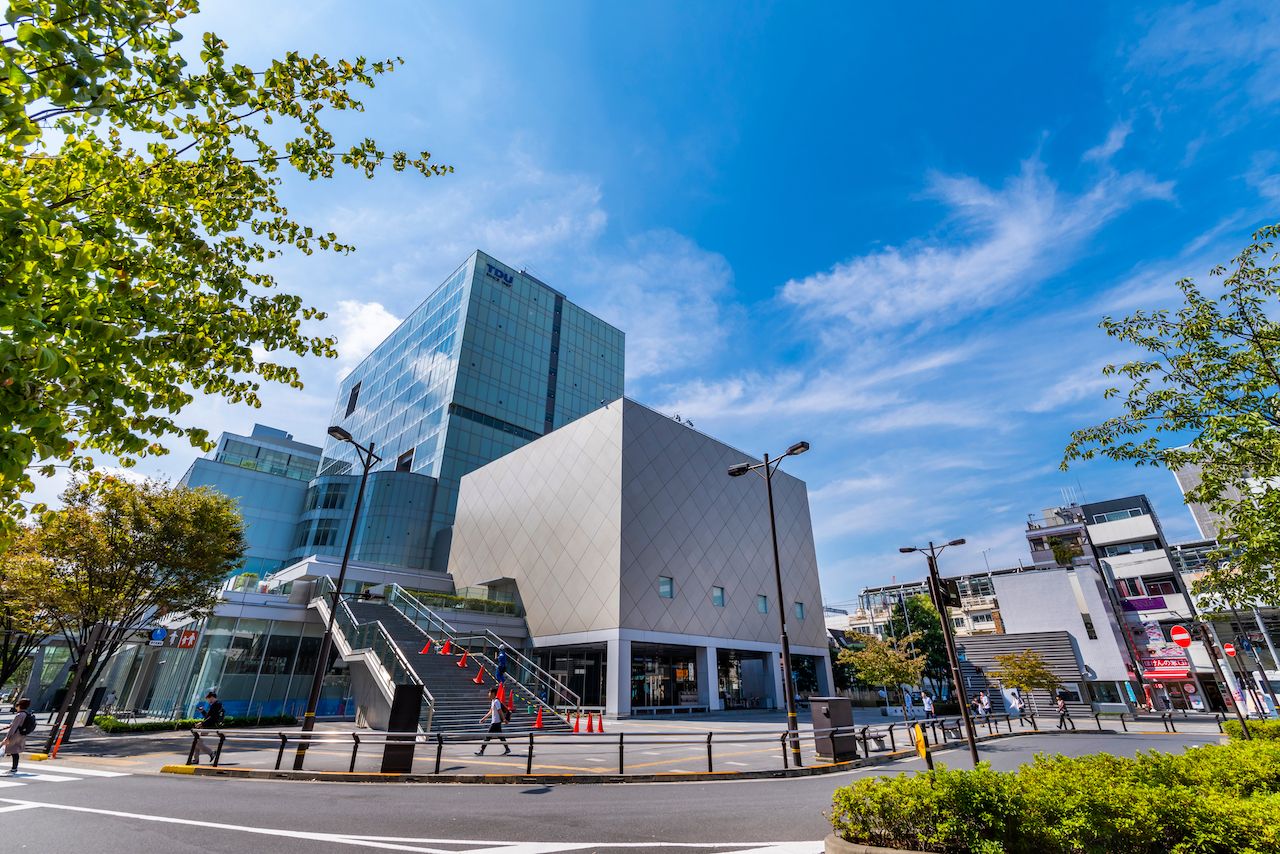 Kita-Senju, a funky and increasingly student-centric district, lies in the otherwise quiet northern Tokyo ward of Adachi. Kita-Senju’s crown jewels are the yokocho (alleyways) snaking away from the train station’s west and east exits. Along the yokocho you will find ramshackle bars fit to seat no more than 10 patrons, sitting shoulder-to-shoulder with izakayas (traditional Japanese pubs) specializing in local finger food and sake. Squeezed in among them are ramen and grilled meat shops billowing steamy, umami aromas into the cramped lantern-lit walkways. It’s similar to Shinjuku’s famous Golden Gai area, but with better food and next to no tourists.

Pari Pari is a classic izakaya serving a range of local dishes and some lovely sake (hot or cold). The restaurant’s name is an onomatopoeic word for crispy, and the crispy-skin chicken is its pièce de résistance. Alternatively, Agalico, a Japanese tapas restaurant with a Mediterranean twist, has delicious sharing plates and a rotating craft beer menu to help you slug it all down. 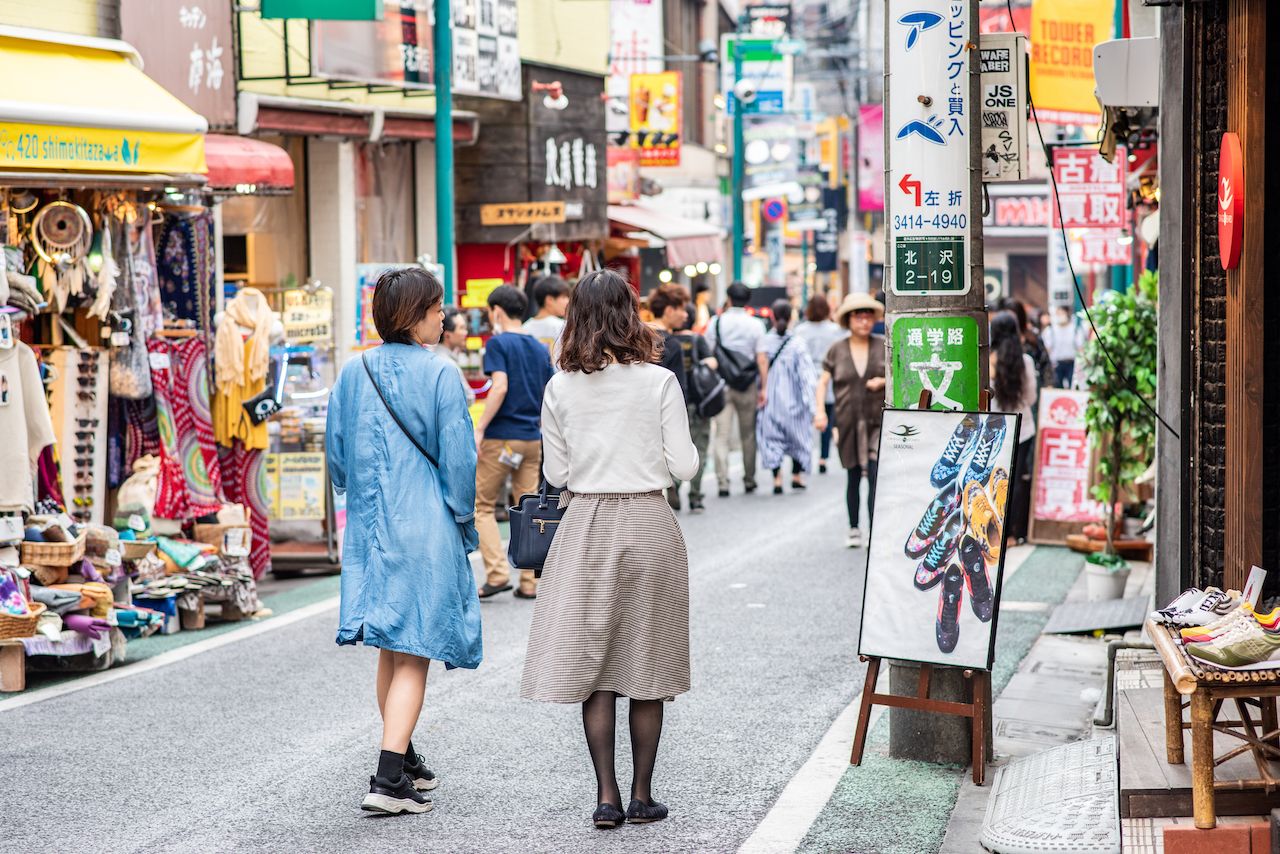 Shimokitazawa, a bohemian neighborhood lying west of Shibuya, is in the thrall of a youthful renaissance, imbuing it with a renewed sense of energy. This new hipster vibe has caused Shimokitazawa to draw frequent parallels with Williamsburg, Brooklyn. And much like Williamsburg, the arts are fundamental to what makes “Shimokita” tick. You can watch live Japanese performing arts at the Honda Theater, catch some stand-up comedy (in English) at Good Heavens, enjoy cheap music gigs at Garage, or check out contemporary art-themed events and culinary markets at Shimokitazawa Cage.

Paradoxically in the 21st century, when you have a neighborhood populated by youths and quirky sub-cultures, themes of retro nostalgia seem to spring forth just as readily. Shimokitazawa is no different. The colorful walkways around the station are lined with vintage clothing stores and vinyl LP shops; if you want to buy records or “wavy” shirts from the days of yesteryear, there is no better place in Tokyo.

Flash Disc Ranch, immediately recognizable due to its doorway shaped like the gaping mouth of an acid-tripped monster, is one of the finest places to sift through a hefty and dusty vinyl record stock. If you’re on the hunt for retro garments however, the chain of MICMO stores in the area are not a bad place to start. Any coffee-lover worth their salt won’t be able to walk past the doors of Moldive without subconsciously drifting in for a cup of fresh roast. 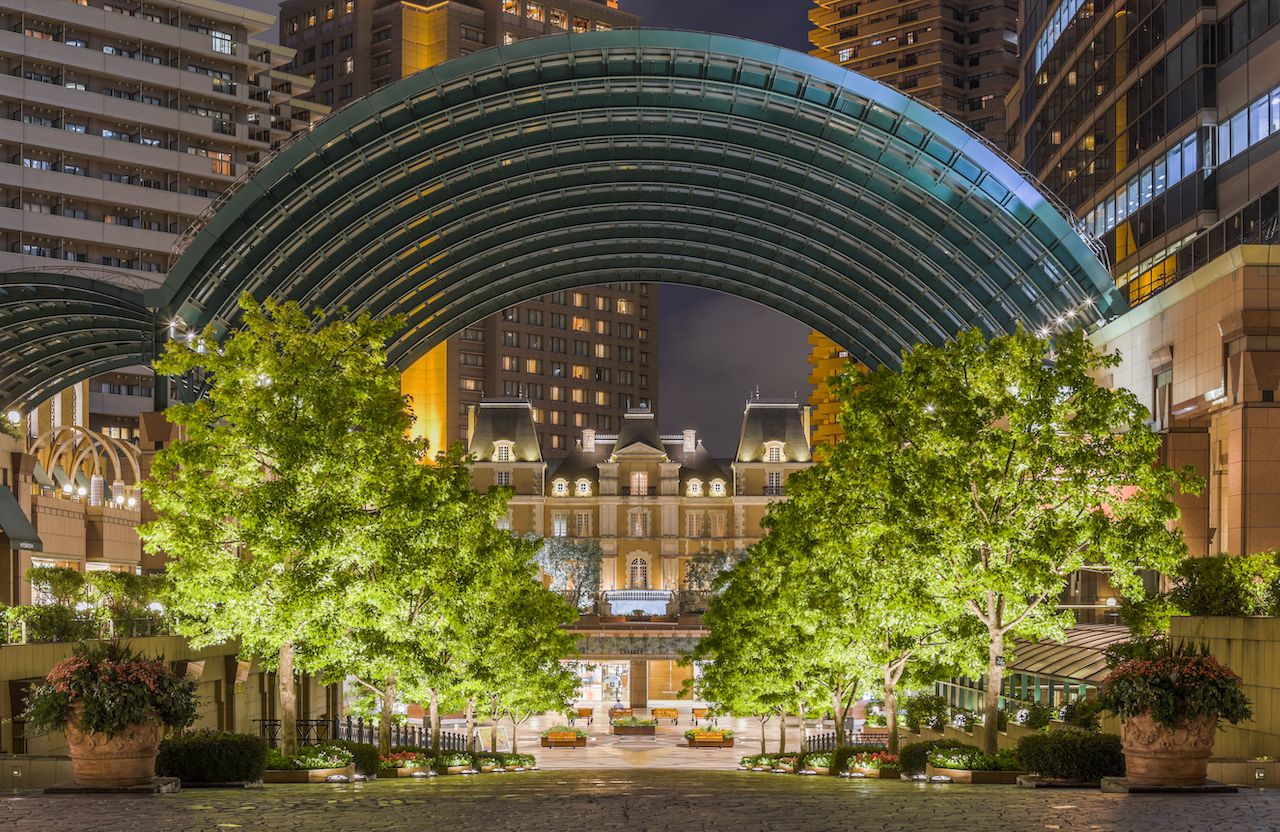 Due to its large expat community, Ebisu is very much cosmopolitan Tokyo but that’s not necessarily to its detriment. At only a stop from Shibuya on the Yamanote Line, it’s right in the heart of Tokyo’s downtown. Ebisu marries the modernity of Western influences in Japan with traditional throwbacks to the old neighborhood which sprung up in the 1920s. It was named after the eponymous Yebisu beer distillery (now in Sapporo) which had been brewing in the area since the late 1800s.

Yebisu Garden Place epitomizes the neighborhood’s metamorphosis. The striking glass-domed complex features an eclectic mix of European and Japanese eateries, alongside a fine-dining Joel Robuchon chateau restaurant. Next door is a tall tower with bars and observation decks displaying panoramic views of Tokyo’s concrete sprawl, marching toward the horizon — on a clear day you can catch sight of Mount Fuji standing sentinel over the capital. You can also watch independent cinema in the small Yebisu Garden theater, or check out one of the many festivals held in the outdoor event space, including a Yebisu beer Oktoberfest.

Conversely, Ebisu Yokocho is as Japanese as they come: a steamy hallway of open kitchens and bars with low seats and tables haphazardly scattered around the floor. If you want to hop from spot to spot sampling the different kinds of cuisine, by all means do so as you won’t be disappointed. Bear in mind, most places will have a small table charge and on the weekends and evenings, salarymen pile in en masse — so it’ll be difficult to get seated in larger groups. 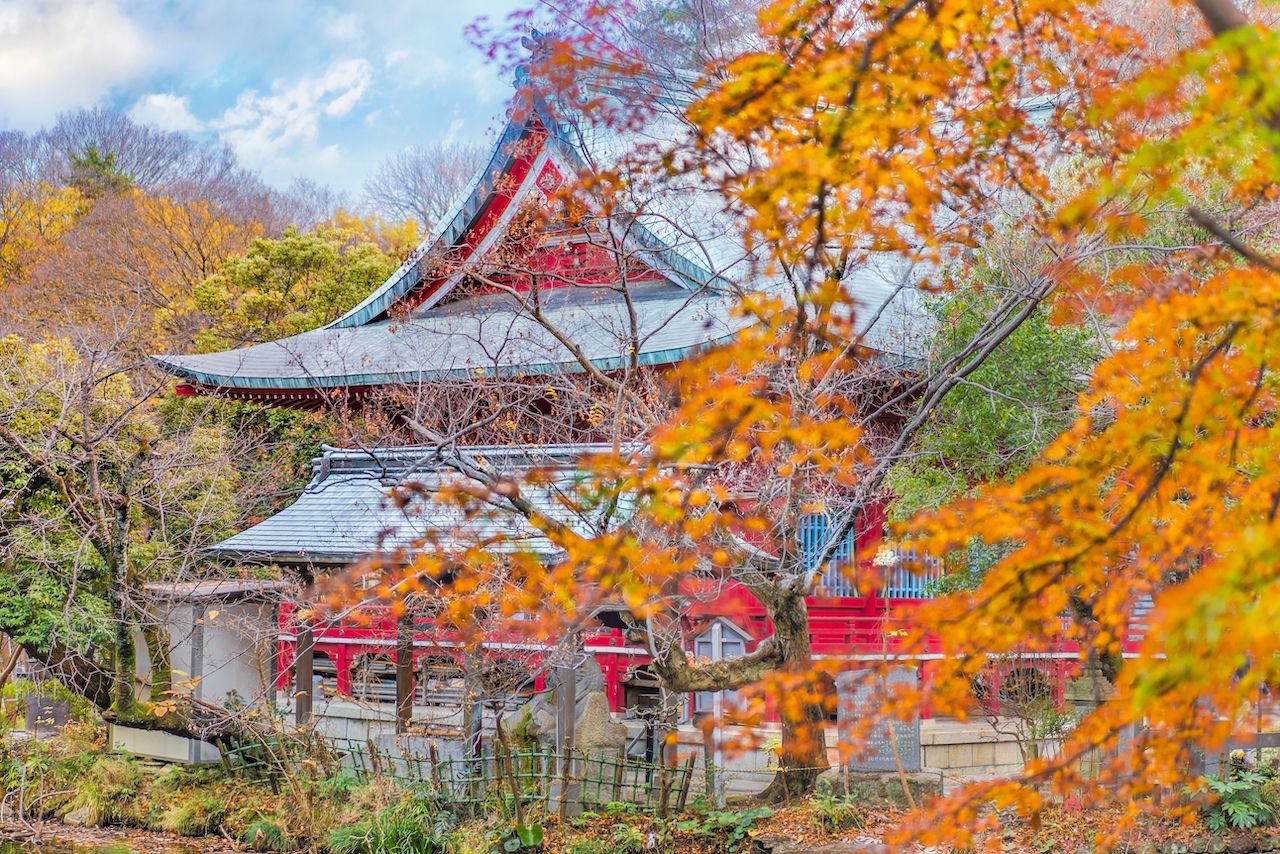 Kichijoji lies in the surprisingly leafy western suburbs of Tokyo and is home to what is certainly one of the finest inner-city green spaces in Japan: Inokashira Park. The park’s centerpiece is a large pond of the deepest green, covered in dense splotches of algal bloom. The paths skirting its perimeter are flanked by overhanging maple and cherry trees and a large outdoor stage and seating area which groups of musicians often take to for practice sessions in the hotter months of the year. The mysterious Benzaiten shrine, built in honor of a vengeful Buddhist goddess, is erected on a boardwalk near the pond’s western banks, while patrons flock to candle-lit restaurants looking out on the pond as dusk settles. It’s a seriously atmospheric setting and never feels as crowded as the over-populated parks in Ueno and Shinjuku.

Pepa Café Forest, a Thai restaurant in Inokashira Park, is a great stop-off point for pad Thai, hot curries, and cold Singha beers. Or if you head to the other side of Kichijoji Station, you’ll find the acclaimed Harmonica Alley. This matrix of covered alleyways used to be part of an old flea market. Now they’re home to food stalls and cheap restaurants specializing in Japanese soul food: sizzling yakitori skewers, regional ramen, gyoza dumplings, and taiyaki, a fish-shaped pastry with filling.

The ultimate travel guide to Tokyo, Japan: Best things to see and do
Tagged
Travel Insider Guides Tokyo, Japan
What did you think of this story?
Meh
Good
Awesome