Best known for its dichotomy between ultra-modern cities and ancient cultural landscapes, Japan has an annual tourism growth rate among the highest in the world. Equally notable is its population of over 89 percent native Japanese people. While there’s been an increase in English-speaking initiatives as the small nation prepares for an influx of visitors for the Olympics in 2020, English is not widely heard or spoken outside of tourist epicenters. Therefore, getting by without knowing the language can be a challenge, but it’s still completely doable. If you’re considering a trip to Japan, here is a helpful beginner’s survival guide offering tips on how to navigate the country without speaking Japanese. 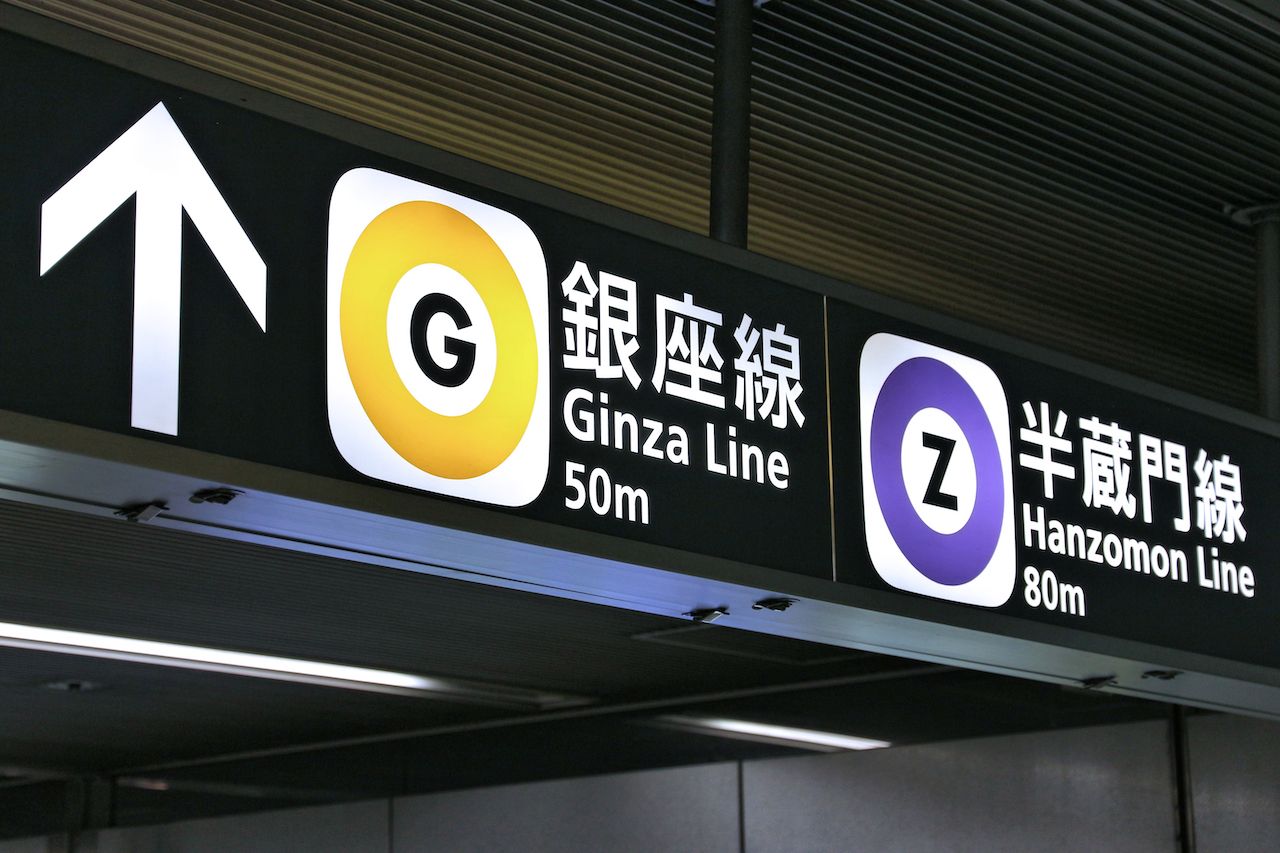 Globally revered for its sophistication, cleanliness, and staggering punctuality, Japan’s railway system is an attraction in and of itself, serving over 20 million people every day in greater Tokyo alone. In the cities, train announcements are repeated in English and signs are written in both Japanese and Romanji — the romanization of Japanese that can be sounded out phonetically and read in alphabetical characters. For example, しんじゅく is followed by its Romanji, “Shinjuku,” which is the busiest train station in the world and located in the heart of Tokyo.

When in doubt, rely on an elementary understanding of colors, numbers, letters, and shapes. Each train line has its own color and abbreviation, and each train stop has its own number, so follow color-coordinated signs inside the station to ensure you’re on the right track — literally. Stop numbers should ascend or descend accordingly depending on the direction you’re going. Subtract the lower number from the higher number to determine how many stops your ride is in total.

To commute like a local, pick up a Suica card and avoid wasted time buying single-ride tickets. The prepaid smart card grants access to most public railways and buses, and it functions as an electronic wallet to make small purchases from vending machines, convenience stores, and select casual restaurants. Suicas cost around $18 up front, split into a $4.60 issuing fee and a $13.80 initial charge. They can be purchased and recharged at most stations and convenience stores. Note: They do not cover high-speed bullet trains (shinkansen) or long-distance buses.

If you’re making more than one long-distance trip, e.g. from Tokyo to Kyoto, the Japan Rail Pass, or JR Pass, is the most cost-effective option. A one-time fee of $300-600, which covers between seven to 21 days, will give you unlimited entry onto major railways, high-speed bullet trains, buses, and ferry boats. To be eligible for a JR Pass, you must be a foreign passport holder and a temporary visitor. JR Passes must be purchased before entering the country.

Maximize independence with these digital must-haves.

Wi-Fi is a must. If switching out your SIM card seems invasive, and mobile carrier options for staying connected while abroad are confusing or expensive, there is a simple answer in pocket Wi-Fi. The small, portable router provides high-speed internet and unlimited data for up to 10 devices including your phone and laptop, relieving the need to hunt down public Wi-Fi or buffer through a spotty connection. Pocket Wi-Fi is priced per day and available for online order, and you can pick one up at kiosks in Japanese airports upon arrival or have it delivered to your hotel.

Plug in the information and Google Maps will lay out exactly which steps to take by foot, car, or train with varied departure and arrival times, so you can choose the route that best fits your schedule. It will tell you when there are delays, how much fares will cost, and which station exit to use that’s closest to your final destination. If you don’t have a data connection, you can save the maps for offline use while you’re still connected to Wi-Fi.

For texts and calls, consider downloading Wi-Fi-based messaging app LINE, the most widely used social platform in Japan. Aside from a buffet of cute stickers and animations to decorate conversations, LINE offers free voice and video calls and does not require exchanging phone numbers to start a chat. An app-generated QR code or username is all you need, which allows for greater privacy and quicker connection to others. 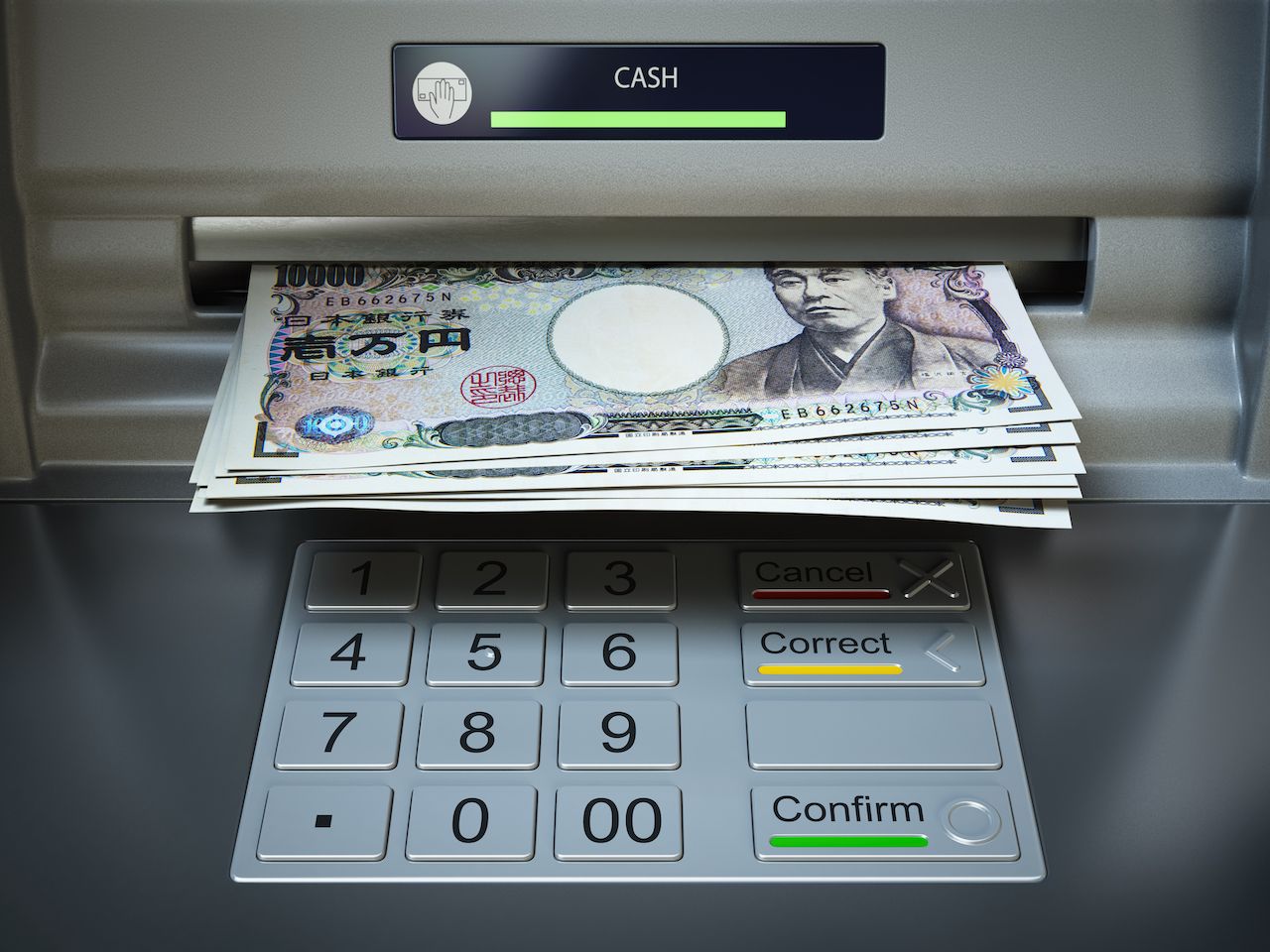 For better or worse, blending in and keeping the peace is important in Japanese society. For travelers, this means not disrupting the natural flow of things and conforming to norms, an important one being having cash.

Credit cards, Apple Pay, and cryptocurrency may hold up in other parts of the world, but in Japan, they won’t go far. The Japanese stick to the basics when it comes to money. Cash is king and the most efficient and common form of payment for daily purchases. Department stores, boutiques, restaurants, and bars in heavily trafficked tourist areas will accept card payment, but if you want to experience lesser-known gems and facilitate fluid transactions, preserving a healthy wad of bills is a priority. ATMs are your best bet, rather than money exchange services, and are available with an English language option in all major convenience stores.

Use convenience stores as one-stop shops for daily needs and a mental reprieve. 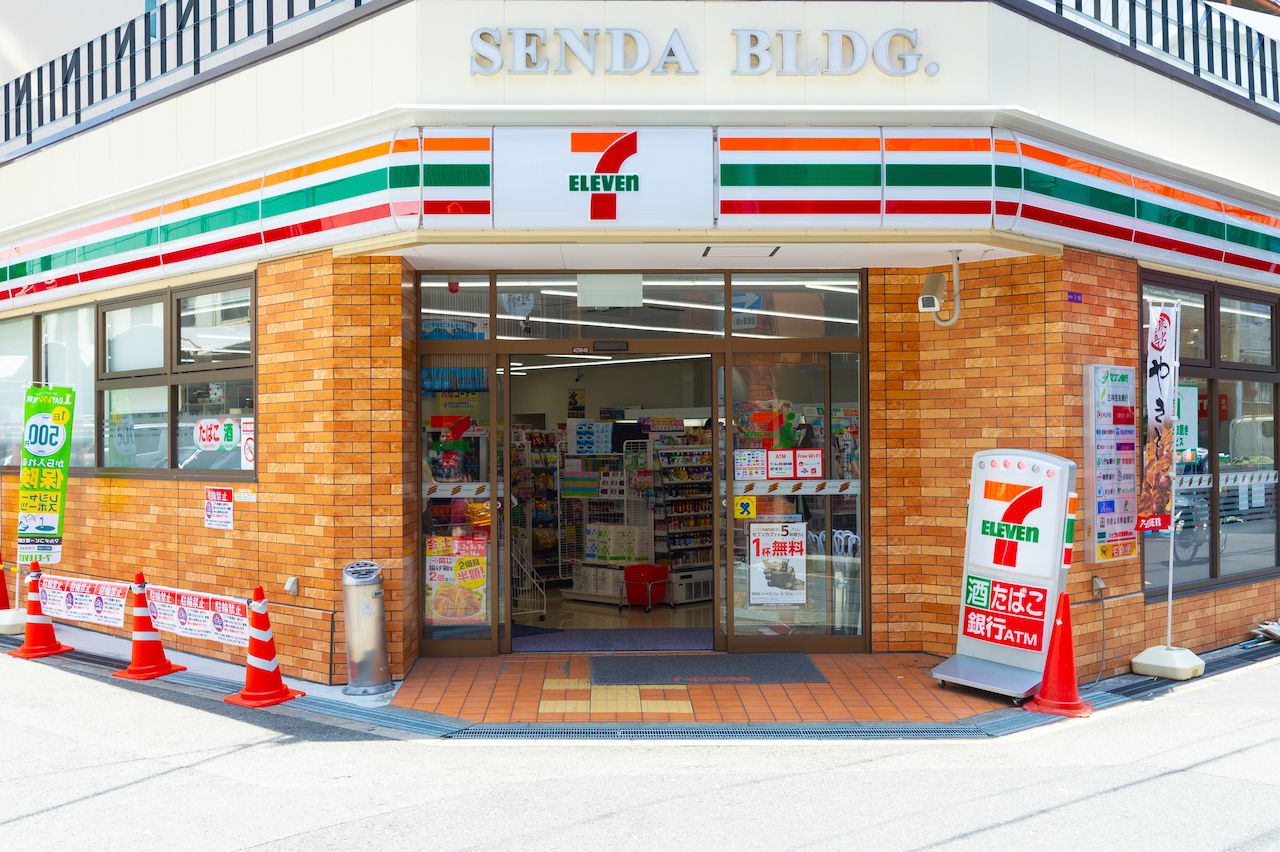 Being “on” all the time while in a foreign setting can be tiring. The simplest tasks back home, like finding a trash bin or restroom can become daunting abroad due to unfamiliar territory and a stark language barrier. For a mental reprieve should filling the nooks and crannies of a jam-packed schedule catch up to you, convenience stores in Japan offer an ideal place to rest.

Unlike in the US, convenience stores in Japan are high-functioning hubs equipped with products and knickknacks to satisfy the needs of your daily minutiae. The Japanese use their 7-Elevens, Family Marts, and Lawsons in the purest sense of their purpose: as a resting stop to grab a quick drink or meal, pick up a necessary item, and even pay bills or pick up a package. Located on every street corner, there may not be an English word in sight, but there will be seats to take a breather and plan out your next move.

Eating out does not require a huge amount of conversation. 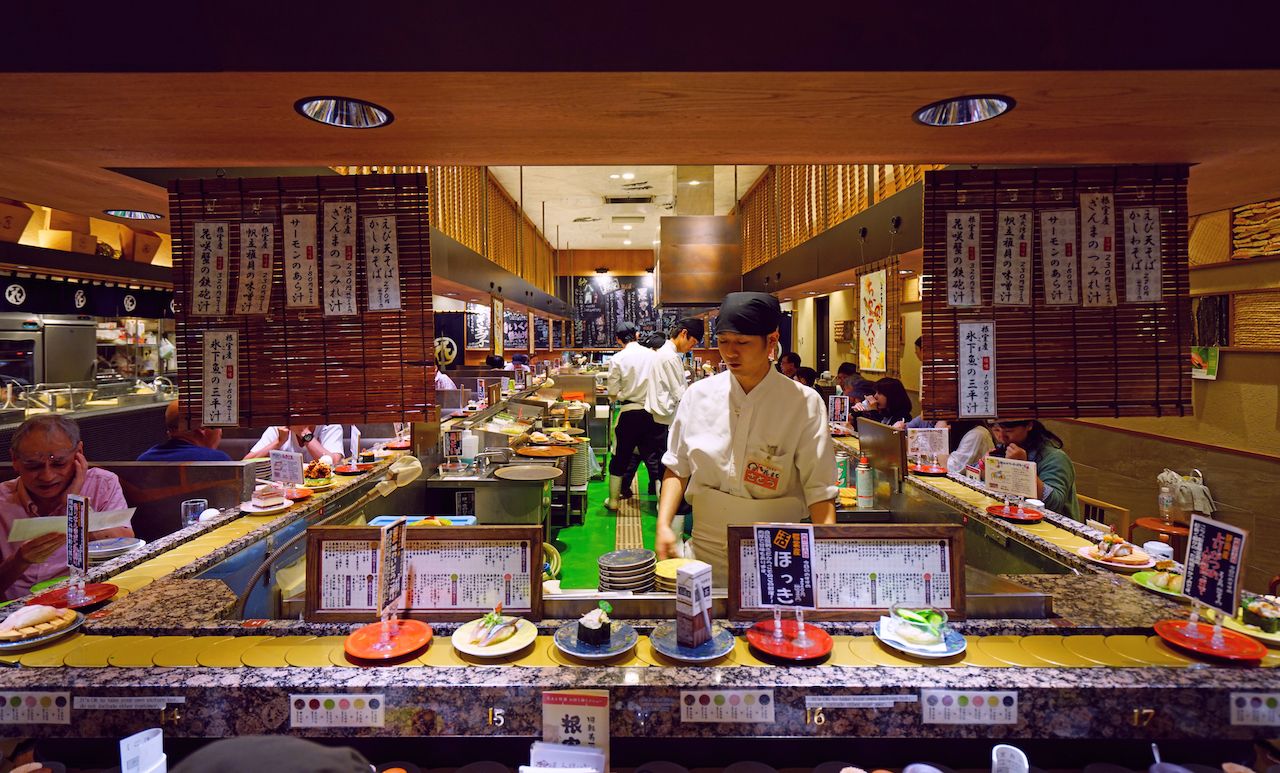 The nature of everyday dining in Japan caters to the lone soldier and those in a hurry. Enjoying a meal alone is not only normalized but favored. Restaurants often have limited seating or a streamlined process with minimal to no human interaction. For those nervous about a language barrier, there are a number of options that will help you out.

Also called kaiten sushi or a sushi train, conveyor belt sushi is the premier choice for hungry travelers with limited Japanese. All it requires is to sit down at an open seat and choose from a revolving parade of sushi, sashimi, and various small dishes. It is the ultimate visual menu where what you see is what you get. If a plate sparks your interest, claim it from the conveyor belt, and bon appetit. Or, itadakimasu, as the Japanese would say. Prices vary by plate color, pattern, and shape — again, surfacing skills acquired in kindergarten — and cost between one to five dollars each, a reasonable demand for sushi in its birthplace. When you’re finished, departing body language will summon a waiter to tally your plate count and guide you to the cashier.

Walk into most fast-casual restaurants and ramen shops, and you’ll be immediately greeted by a ticketed vending machine: a host, menu, and waiter wrapped into one bulky jukebox. Some will have photos, others will have letters or numbers corresponding to a photogenic menu displayed in the front window. Unfortunately, some machines will have only written Japanese, in which case intuition is your best bet for those with an open mind and palate. Insert bills into the machine and receive a paper ticket. Bring the ticket to an open seat, hand it to a waiter, and food will be on its way.

Learn essential, catch-all phrases to use in every interaction. 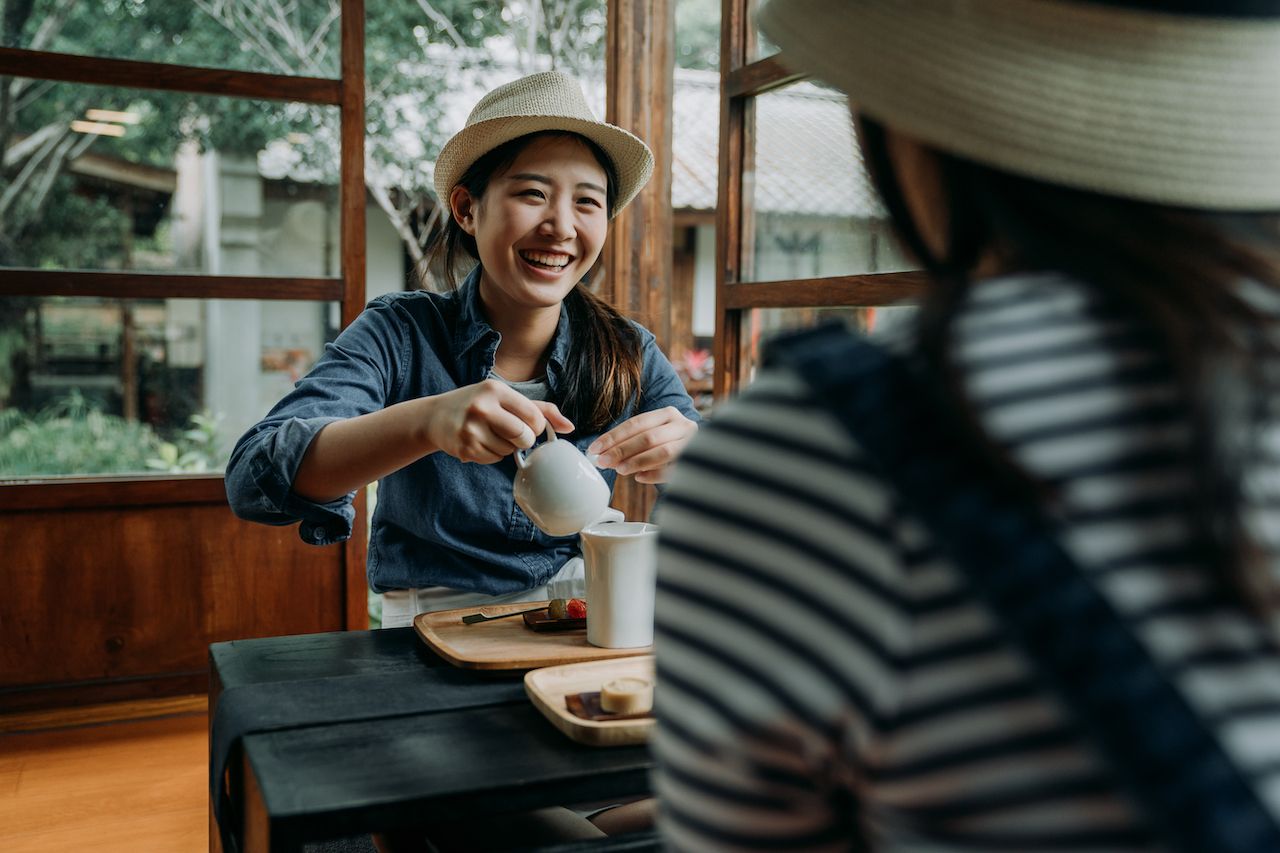 All this being said, the true secret to getting around in Japan is, of course, knowing a little Japanese. These brief phrases will take the edge off and carry you farther than you think:

The most basic verbal gesture of human decency to show your appreciation, nowhere more important than in Japan.

Use this when pardoning yourself on a busy street or train, calling a waiter over to your table, or when you need to ask for something.

This is good to use when speaking to anyone you are asking something of. For example, getting directions or a recommendation. Onegaishimasu can also be thought of as “thanks for helping me” or “thank you for your kindness.”

I’m fine or no thank you: daijoubu desu

You may use this phrase to decline something. Or, if you want to tell someone you are, or something is, okay as is.

When in doubt, say yes!

Let others know you don’t understand what they’re saying, and they will likely switch to their best efforts in English or leave you alone.

For more good-to-know phrases, visit the Japan Travel Centre. If you really want to impress locals, check out our guide to Japanese idioms.

Be mindful of social etiquette. 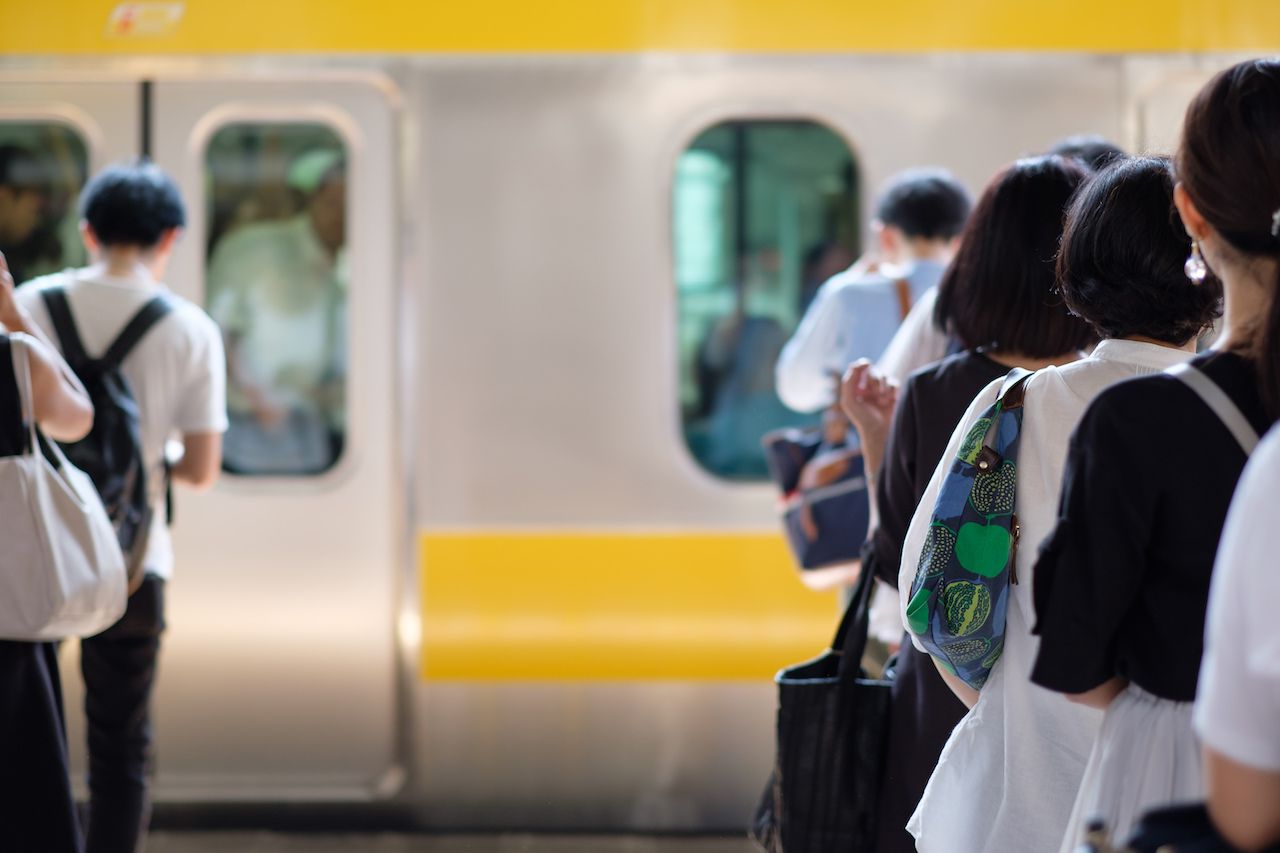 To authentically communicate in Japan is to understand and speak its unofficial language: a fundamental common courtesy. If there is one piece of wisdom to keep in mind as a foreign visitor, it’s be mindful. The Japanese value group needs over individual gain and operate at a more diligent default setting than most around the world to keep a harmonious society. Not speaking on trains, maintaining polite body language, properly disposing of trash, and standing on the correct side of an escalator are all good starting points, but upholding yourself to the same degree of integrity as the Japanese will dismiss any hiccups you may face by not knowing how to speak the language.