One of Russia’s most Instagrammed desserts may remind you of Nicolas Cage on the cover of Adaptation: a broken flower pot, clay splinters, strewn soil, and a crumpled blossom, all clumped together. It’s called “My mother’s favorite flower,” and is made with halva mousse and pepper ice-cream filling, chocolate-brownie earth, a bellflower, and a sprig of mint served atop a real piece of parquet floor.

“I remember sitting by the window on long winter evenings, gazing through the frost-patterned glass…and inside, there was the smell of wet earth from flower pots, carefully tended by my mother’s hands,” says its creator, Cococo chef Igor Grishechkin. “They were silent inhabitants of the room. Almost mystical and sacred.”

Grishechkin, 38, cooks to indulge his inner-child. At Cococo in St. Petersburg, Russia’s imperial capital, the chef’s dishes are as melodramatic as the grandiose museums, theaters, and Orthodox churches that the city is known for. He’s inspired by fairy tales and Russian history: amuse-bouche in Fabergé eggs, prima ballerina Anna Pavlova twirling on plates, and crème brûlée carved like antique brooches. 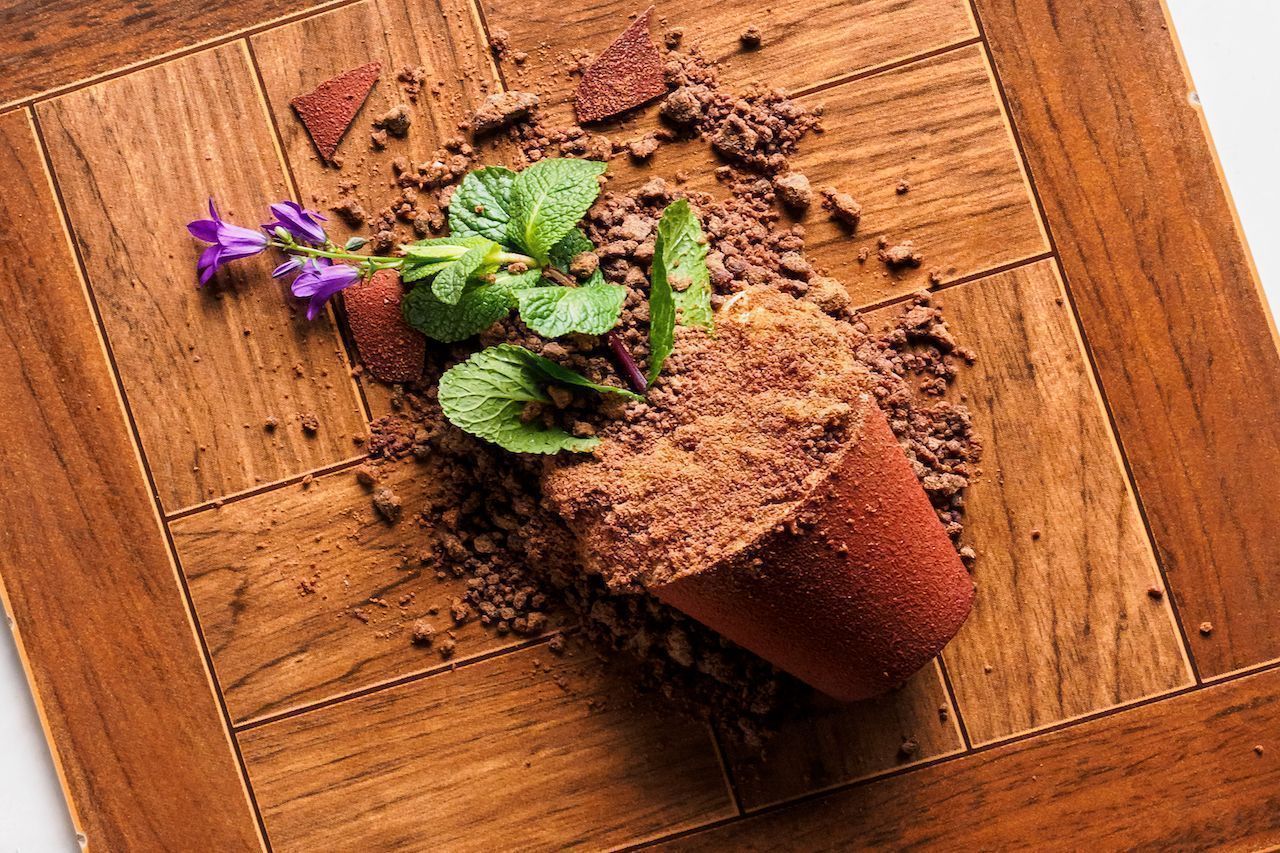 But Grishechkin’s cooking is also controversial. It not only highlights the opulence of tsars and Catherine the Great, but also the Soviet era. White-fish doughnuts with remoulade emulate the fried doughnut-like pyshki of drab Leningrad cafes. “Cococorn” draws inspiration from Soviet-era movie theaters by serving sweet-corn ice cream frozen into popcorn shapes inside tubs reminiscent of those from the time of the Republic.

The approach is in stark contrast to the New Russian Cuisine movement led by the country’s most internationally known chef, Vladimir Mukhin.

“Russians suffered 75 years, two and a half generations of Soviet time, when people were fooled into eating gray urban grub,” Mukhin said in a Chef’s Table episode spotlighting him and his restaurant, White Rabbit, in Moscow. “I really hate that period because it destroyed all Russian cuisine. I will do whatever it takes to bring the genuine Russian taste back to the people.”

Cococo’s menu, from the meat jelly and mustard ice cream to the green buckwheat porridge, is in direct opposition. Grishechkin embraces all of Russia’s historic cuisine, including the dishes from the time period that Mukhin says “destroyed” the country’s “genuine Russian taste.”

“The Soviet past happened,” Grishechkin says. “You can’t just cross it out. Saying that it didn’t mean anything would be lying to ourselves. People growing up in the Soviet Union can’t say there was something disgusting about the food they had as children, because most of them, including me, have light, pleasant, warm memories about it.” 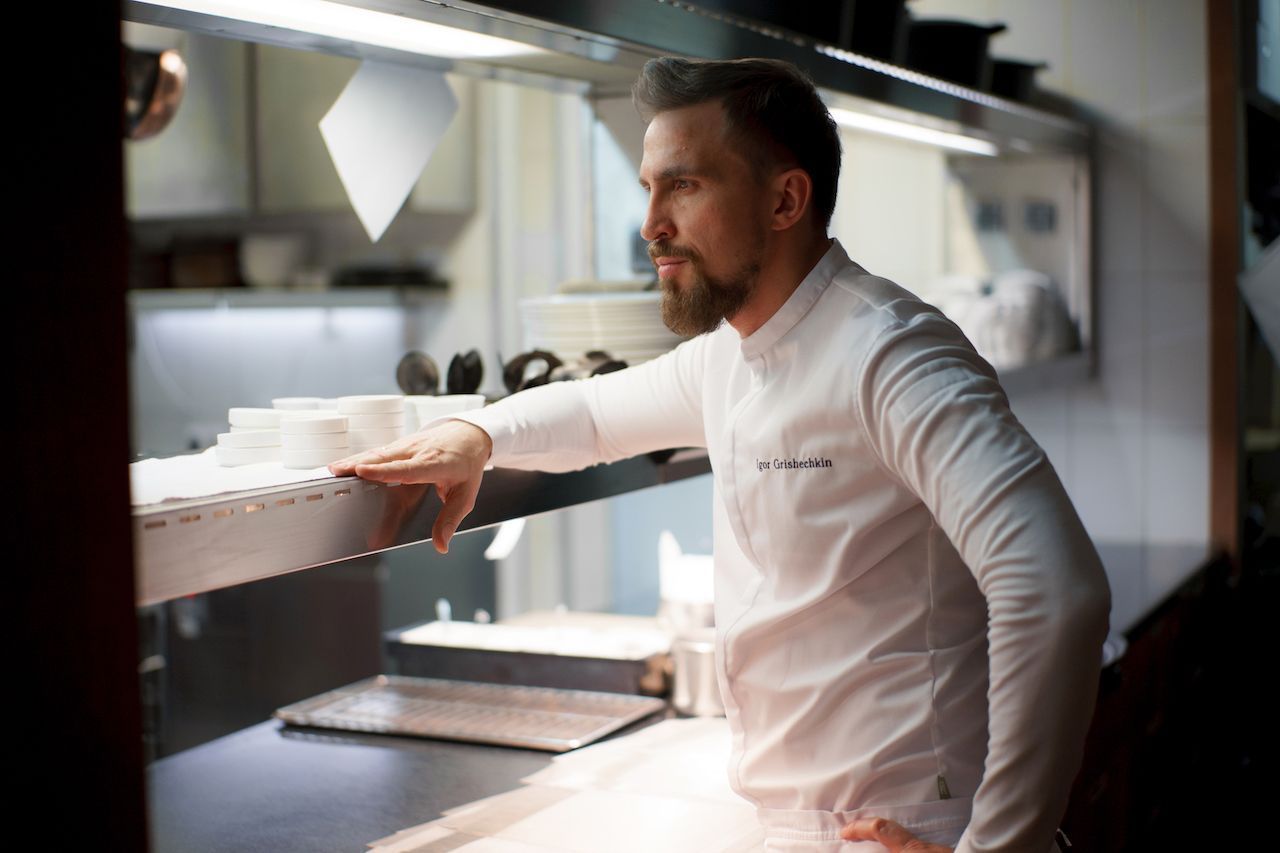 Grishechkin grew up in the 1980s in Smolensk in western Russia, which is next to the Belarus border. The concepts for his cooking started in his mother’s garden. The flower pot dessert, ordered about 2,000 times a month at Cococo, is just one of many dishes that serve as an homage to the mama and babushka who raised him.

Chicken broth, served at the restaurant in an old-style Russian tea glass embossed in brass, is the ultimate hangover cure after a vodka-fueled evening in St. Petersburg. Growing up, it was a belly-warmer cooked over a wood-burning stove.

“Waking up in the morning, when it’s cold in the house, you fire up a little piece of wood and you feel the smell, warmth coming from it and you see the open, dancing flames and it’s an extraordinary feeling,” the chef recalls. “It’s a completely different thing when food is cooked on an open fire like this.”

Another dish, a free-range quail stuffed with baked potatoes and penny-bun mushrooms, is a visual ode to village slaughters. The quail sits pretty on a plate splattered with blood-red beetroot sauce.

“At the end of autumn, the men would butcher a pig, cut off the skin, slice it up, fry the blood, make sausages, salted things,” Grishechkin says. “Those memories are a feeling intact with nature and life and death. That’s what brings me to the food.”

Cococo works exclusively with seasonal ingredients sourced from farmers and producers in the surrounding northwestern Leningrad region. When entrepreneur Matilda Shnurova approached Grishechkin to realize her dream of a slow-food, local-produce restaurant, what’s now Cococo, it was a leap of faith. “Everyone (told me not to do a concept like this),” he says, laughing. “But negative responses are not a reason to stop believing in something.”

In 2014, when many Russian restaurants were forced to stop importing and start buying local due to sanctions, Cococo’s regional sustainable model had already been in place for two years.

“Restaurants are serving (Russian food) with avocado, ponzu, and yuzu sauce, and they think they’re doing something better, but they’re going in circles,” he says. “If you change the ingredients and the dish, it doesn’t mean you’re doing something authentic.” 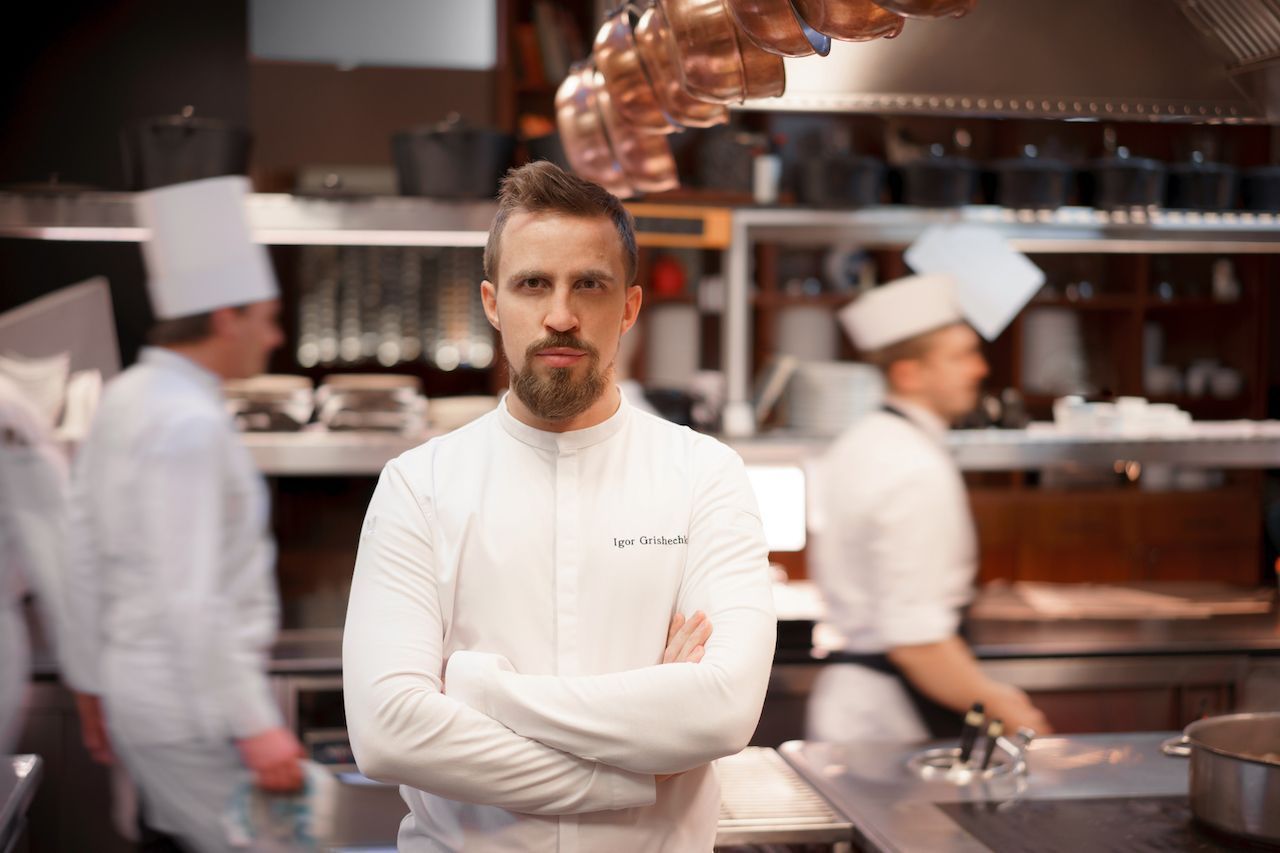 Cococo is now a destination restaurant in St. Petersburg for locals and visitors alike, serving affordable a la carte dishes for under $20 as well as an ambitious 11-course tasting menu ($66) where Grishechkin really shows off his skills.

And although there is debate about what concepts New Russian Cuisine should champion, chefs like Grishechkin and Mukhin are, in a sense, working together to bring back a culture of restaurants and eating out that undeniably disappeared during the Soviet era.

“I don’t think we need a manifesto like New Nordic cuisine, but there should be principles to uphold,” Grishechkin says. “Seasonal and local, an homage to tradition, and third is cultural inheritance. Remembering you’re Russian. Sometimes what’s important as a chef is not what you learned, but what you were born with.”

May 31, 2022 Aryana Azari
✖
travelstoke
Download the mobile app
stoked by