Ah, spring – when snow is melting off mountain peaks and the sun dares to peek out from behind gray winter clouds. For some, it means the start of family vacations and weekends spent hiking or camping. But for others, it’s time to hit the road.

While federal law requires interstate highways to have a maximum grade of six percent, state highways are a different story. Pennsylvania maintains a highway with a 14.5-degree slope, and California is even steeper, with a highway at a whopping 26-degree grade. Highway grades are pretty easy to understand and expressed in 100-unit increments. For example, a highway with a six-percent grade means it gains (or loses) no more than six feet of elevation for every 100 feet of distance.

This year, for a road trip that won’t put you to sleep, choose one of these roads that put you at the edge of your seat – both to see the beauty outside your window and to brace yourself on the steep downhills. Here are seven of the steepest highway grades in the US that have somehow been allowed to exist, plus one through some of the most beautiful scenery in Canada. 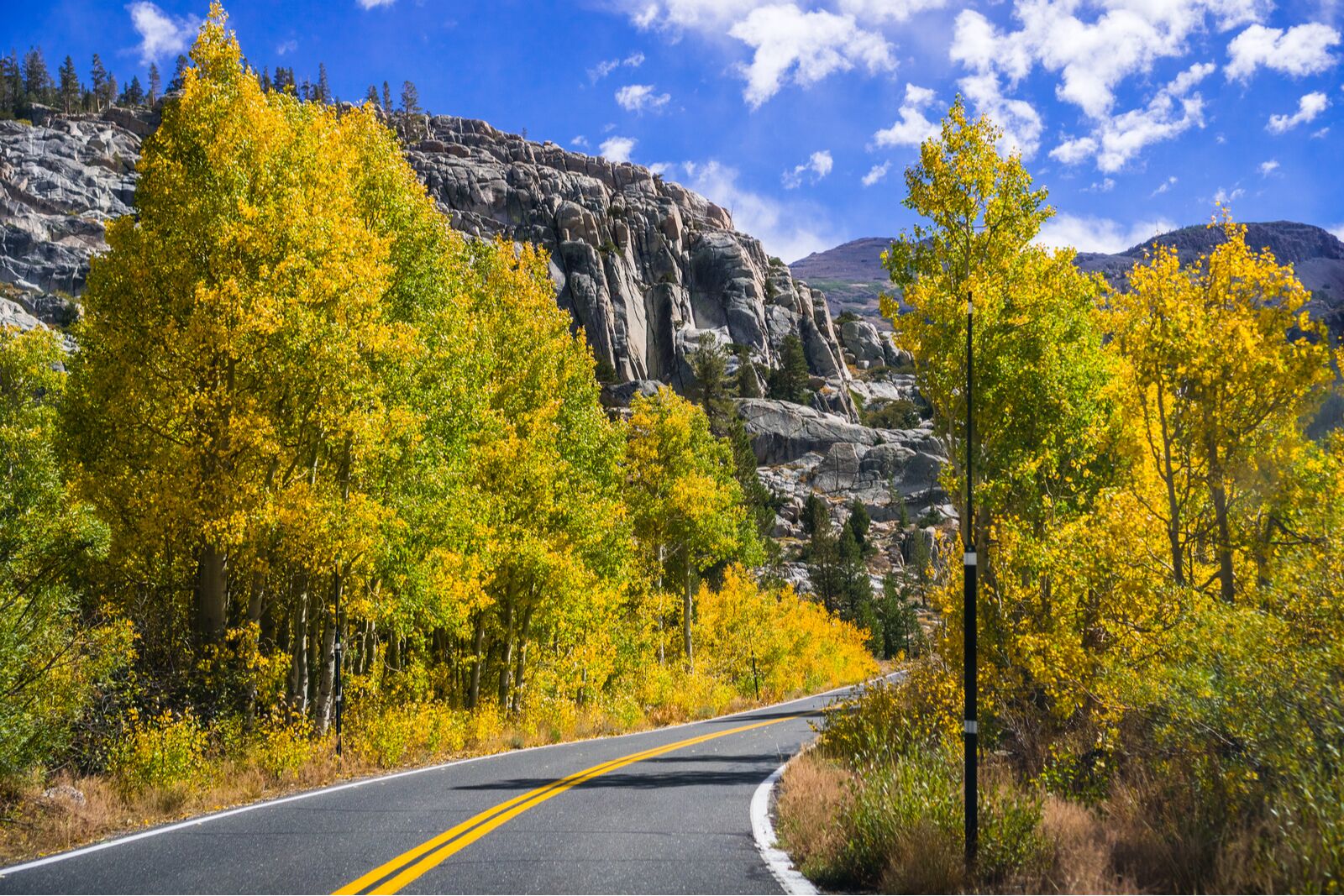 In the 1850s, entrepreneurs built a series of passes through the Sierra Nevada mountain range to help immigrants reach California during the Gold Rush. The narrow routes were first cleared for wagons and later became private toll roads, then state highways. These passes, called the Trans-Sierra roads, cross over some of the country’s most inhospitable terrain. As a result, the roads are winding, narrow, and definitely steep.

There are more than 20 passes throughout the Sierra Nevada, but none as precarious as the Sonora Pass along CA-108. It’s just 90 minutes away from Sacramento, but you’ll know you’re not in the city – the twisting, hairpin turns and slog as you trudge up a mountain road at an incredible 26-percent grade will make it very clear you’re deep into the mountains.

To further underscore the potential danger, know that this highway (along with several other Trans-Sierra roads) closes to the public for the winter. Between roughly November and April, you’ll have to take the long way around. (And, oh, is it long.) And even when the road is open, slick roads and icy conditions still demand well-honed driving skills.

Travelers searching for the utmost beauty on their road trips will want to take a short detour to Stanislaus National Forest. With 78 alpine lakes, towering trees, and plenty of wildlife, nature-lovers will find themselves among some of the nation’s most fascinating natural features without the crowds of Yosemite National Park to the south. 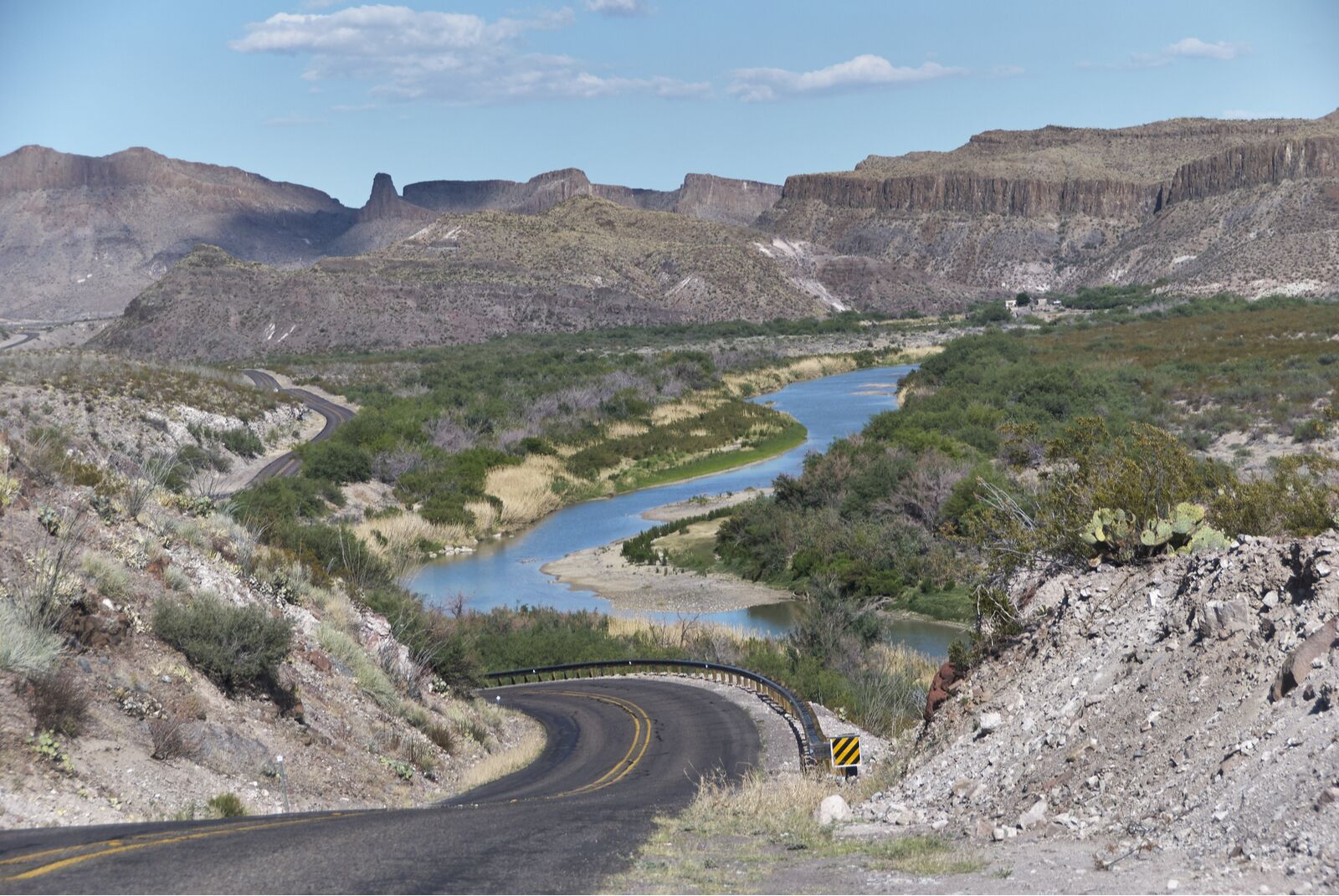 Deep in the southwest corner of Texas, you’ll find this scenic highway that travels along the Rio Grande River. While a select few will recognize the road from the old western movie Contrabando, many will remember the steep, curving climb up what the locals dub “the Big Hill.”

Be careful when roadtripping along this highway. With no easy alternate route to Presidio or Big Bend National Park near the road’s endpoints, travelers have no choice but to drive up and down a 15-percent grade. And it’s reasonably common to have both wildlife and livestock wandering across the roads.

The advice here? Take your time.

As remote as this corner of Texas is (the nearest major city is San Antonio, which is six hours away), road-trippers will find only a spattering of cars along FM 170. Take “the Big Hill” as slowly as needed and enjoy the views from the overlook at the top. You likely won’t have any cell service either, so download a map in advance if you want to stop along the way. Cool nearby detours include the ghost town-turned-artistic hub of Terlingua, Big Bend Ranch State Park itself (not to be confused with Big Bend National Park), and the old movie set from Contrabando, which sits unmarked in a gully along the Rio Grande. 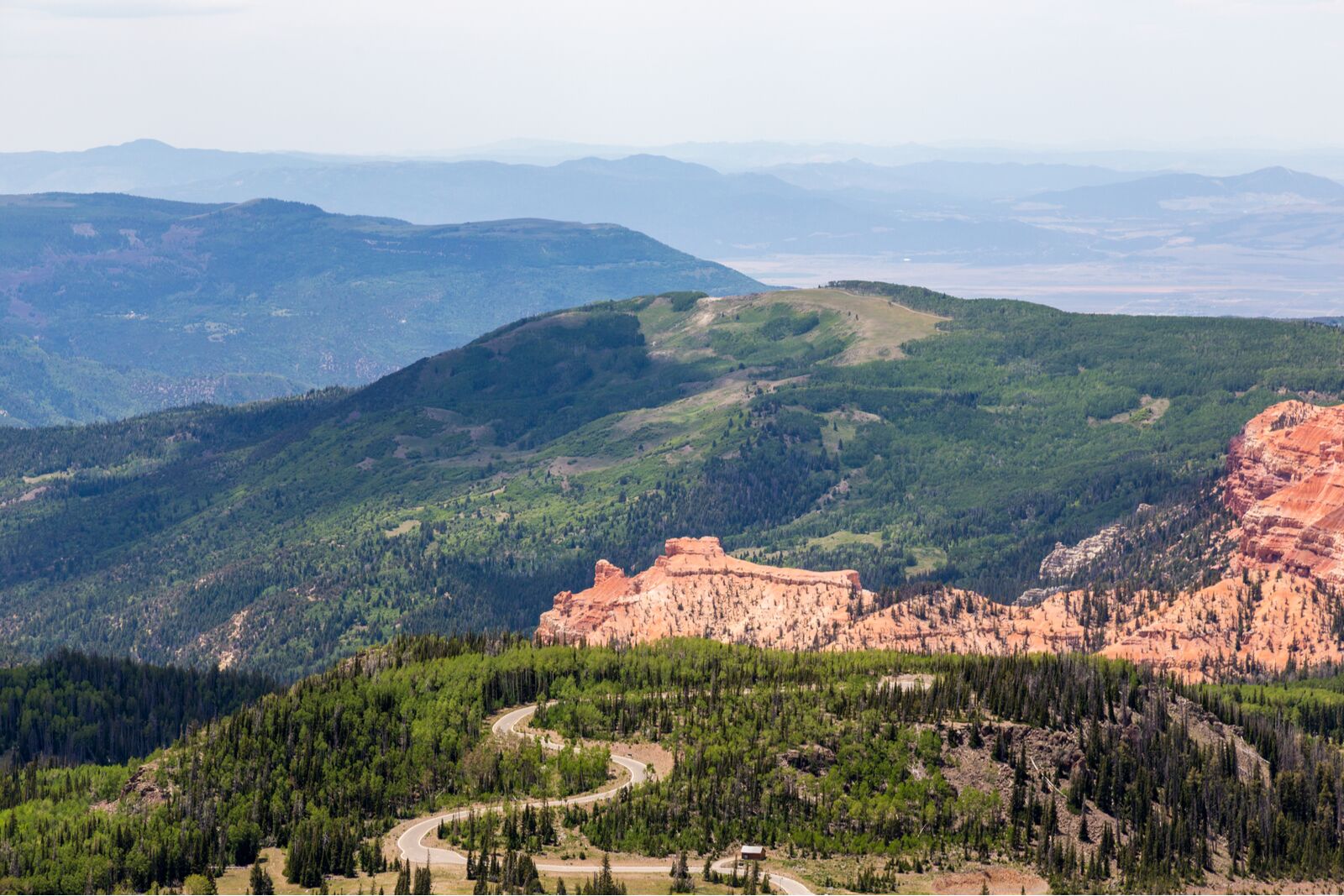 Avid skiers may know this drive well. If you’re heading up to Brian Head ski resort for a long weekend, you’ll find yourself navigating one of the steepest roads in Utah.

Originally an old pioneer road used to transport logging materials, Utah Route 143 winds its way through the Dixie National Forest. The highway can reach grades of over 13 percent as it ascends to the top of the ski resort. As a result, drivers frequently overheat their brakes, and large trucks will try to avoid the byway altogether to keep them from catching fire. Oh, and of course, having fresh snow and ice on the ground really doesn’t help matters. Neither do the out-of-towners with two-wheel-drive cars and no winter driving skills trying to make their way in late at night on Fridays.

Due to sometimes icy conditions, the Utah Department of Transportation regulates the highway’s usage. Utah’s DOT regularly cleans the road and often requires chains in colder months. Because of their efforts, the most challenging aspect of driving this road is sharing it with the influx of skiers about to hit the slopes. If you go during a storm, make sure you have four-wheel-drive and snow tires or have chains in your trunk (and know how to put them on). 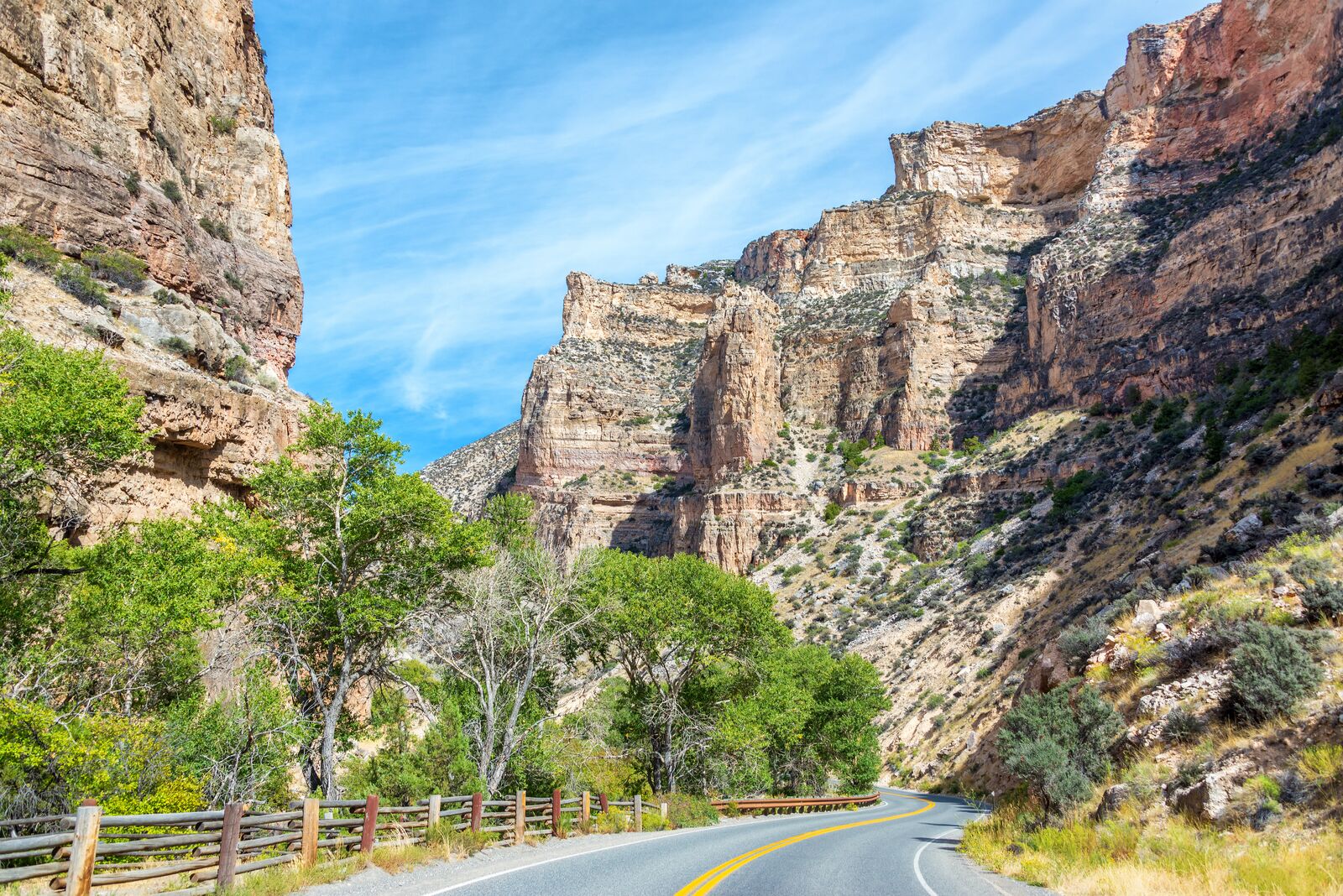 Before the interstate system modernized cross-country travel, Americans relied on US highways like Route 66. One such highway, built in 1926, runs from Chicago, Illinois, to Yellowstone National Park in Wyoming. But just a few hours from the park, the road starts to get a little sketchy.

US-14 enters Big Horn National Forest about an hour outside of Buffalo, Wyoming. But the bighorn sheep aren’t the only big thing in the forest. The highway traverses near Black Mountain and Sibley Lake while steadily climbing at an average grade of 10 percent. If you thought that was tough, wait until you start to climb up the 13.5-percent grade breaking point.

Needless to say, RVs face an uphill (or, rather, downhill) battle the entire way, and semis avoid the highway altogether.

The road ascends precariously high at a max elevation of 9,430 feet, and the state of Wyoming shuts it down to the public for the winter. In spring and fall, the obvious place to stop along this scenic drive is Yellowstone National Park, though Devil’s Tower (from Close Encounters of the Third Kind fame) and Cody, a historical western town founded by Buffalo Bill, are just a short drive off the main drag. 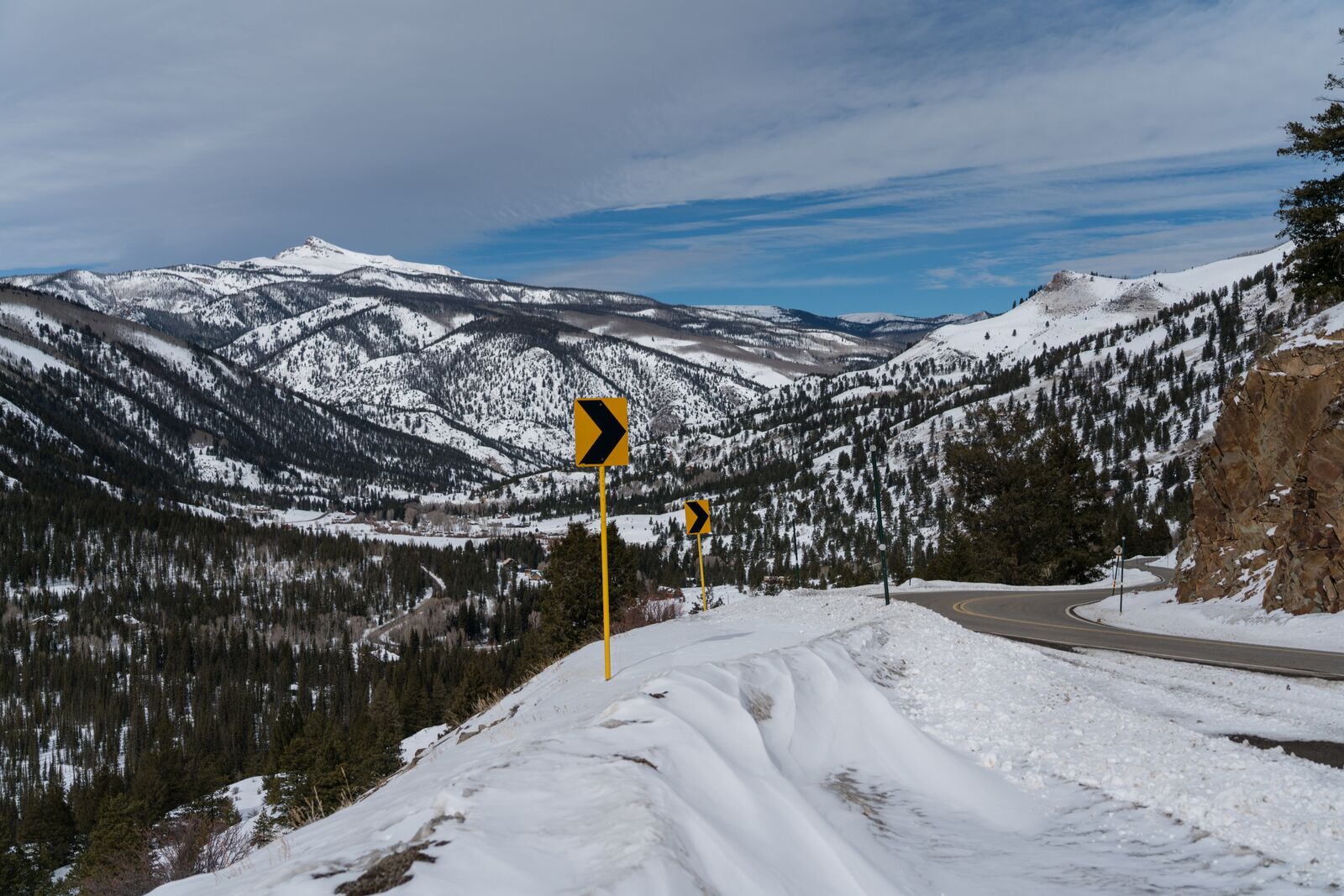 The highway cuts through the middle of the national forest and travelers could spot deer, elk, moose, and bighorn sheep in their natural habitats – the fact that it’s one of the steepest highway grades in the US doesn’t bother them one bit. While navigating the highway for rogue wildlife, adventurers may also want to make a stop at Lake San Cristobal, about a three mile detour). It’s the state’s second-largest natural lake at around 9,000 feet.

The byway was built over an old mining road once used to transport ores and supplies to the San Juan Mountains. Even experienced road-trippers will likely find the driving conditions challenging. Drivers who would like to bypass the bypass (get it?), can take Highway 285, which circumvents the national forest in a more leisurely, albeit longer, drive. 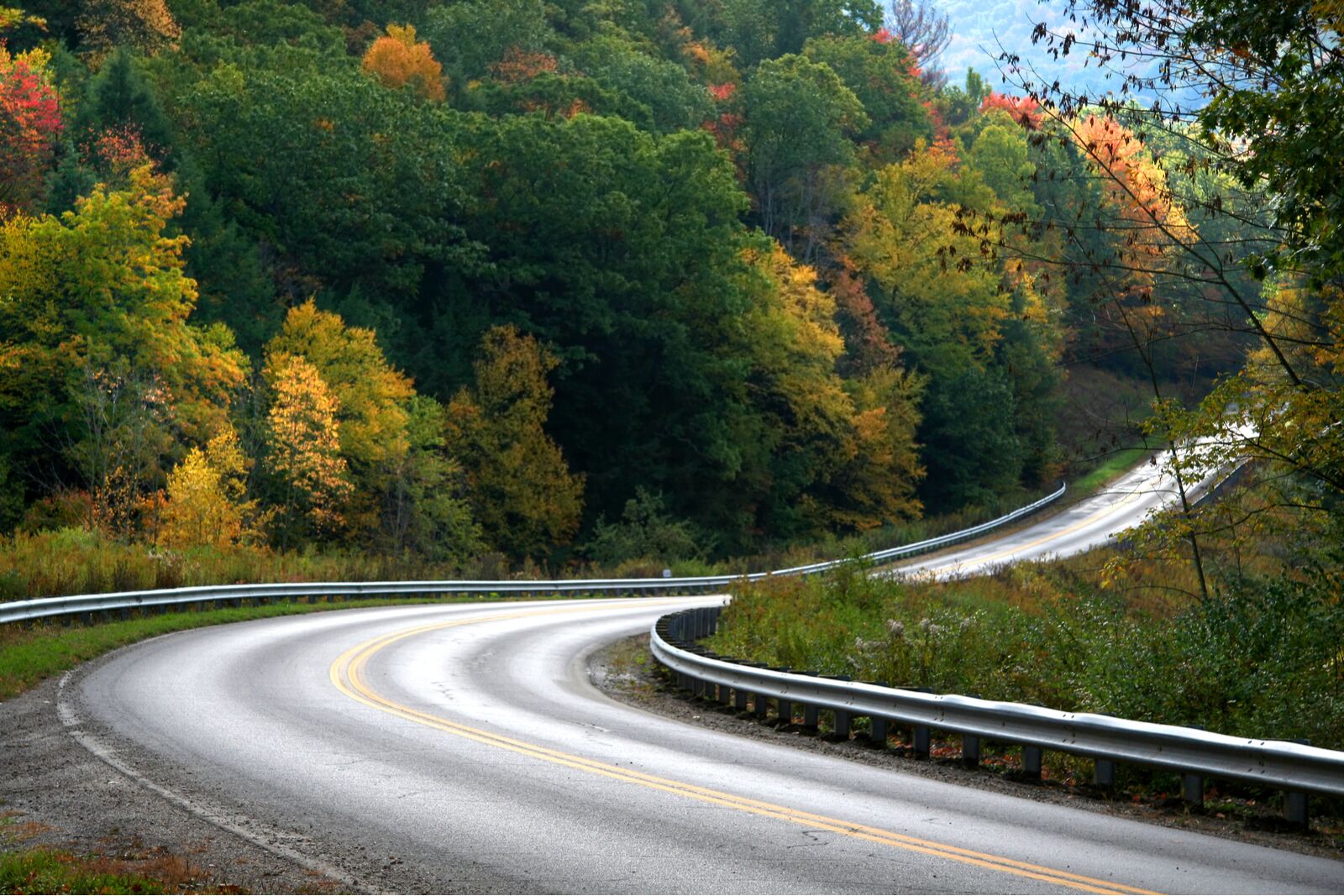 Travelers coming from Harrisburg, Pennsylvania, might be able to attest to the difficulties of driving along Route 487 once they get about two hours south of the city.

The highway snakes through the Allegheny Mountain range, where treacherous switchbacks and grades well over 10 percent are sure to have even the most avid drivers riding the brakes. At one point, the highway gains altitude at a 12.5-percent grade, and at its steepest, road-trippers will find themselves struggling up a 14.5-percent grade.

Route 487 is the most scenic drive to Ricketts Glen State Park, a park renowned for its waterfalls, including 94-foot-tall Ganoga Falls. So despite having one of the steepest highway grades in the US (or perhaps because of that), it’s worth the drive. Be sure to pay close attention to the road, however. Cyclists also love to explore this road, so be mindful of your speed as you hit these steep downhill grades. 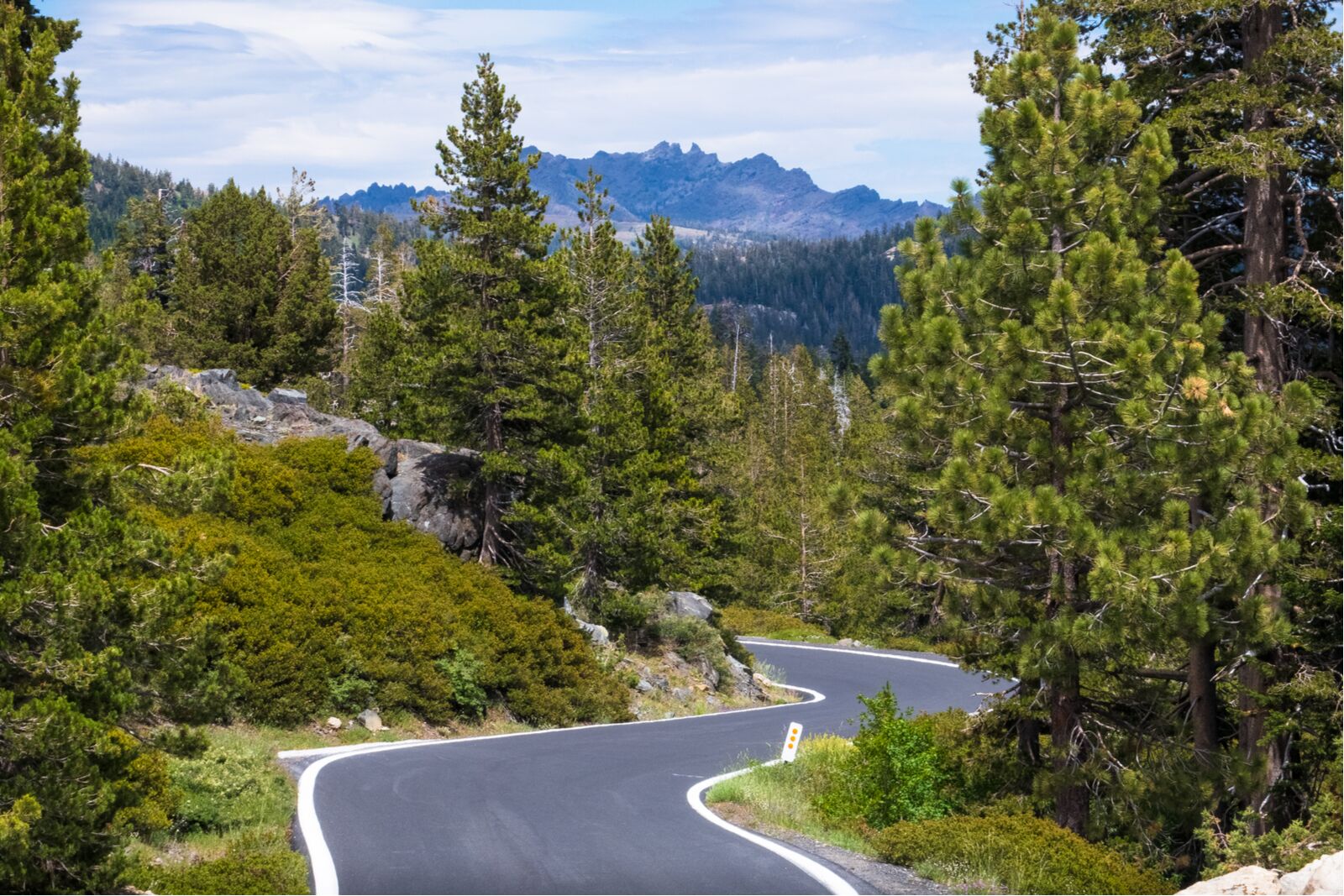 Ebbetts Pass Scenic Byway is a sister of the Sonora Pass along CA-108. Many Trans-Sierra passes are tough to navigate, but these two take the cake. While Sonora Pass has the steepest highway in California, this one is pretty close — and the narrow lanes and sloping shoulders with steep drop-offs certainly won’t inspire confidence in most drivers.

Route 4 winds for 61 miles through Stanislaus National Forest north of the Sonora Pass. The highway peaks at 8,700 feet and climbs portions of the range at 24-percent grades. Like Sonora Pass, Ebbetts Pass closes to the public for the winter. But come on: it’s one of the steepest highway grades in the US. You wouldn’t want to be caught on this insane road in the snow, anyway.

Those looking for an unforgettable road trip will love the scenery as the highway traverses through meadows and past reservoirs surrounded by pines. Travelers should take a moment to enjoy the beauty of the forest at Lake Alpine, and there’s a quick half-hike, half-scramble visitors can take to Ebbetts Peak. It’s only about half a mile long, though it gains about 450 feet of elevation.

As beautiful as it is, if you don’t want to take such an aggressive pass, opt for Highway 120, also known as Tioga Pass Road. It crosses the Sierra Nevada Mountain Range but is more evenly graded and maintained, though it also closes from roughly November to May. Of course, this will take you right through Yosemite National Park, so you won’t sacrifice too much beauty by skipping Stanislaus National Forest. 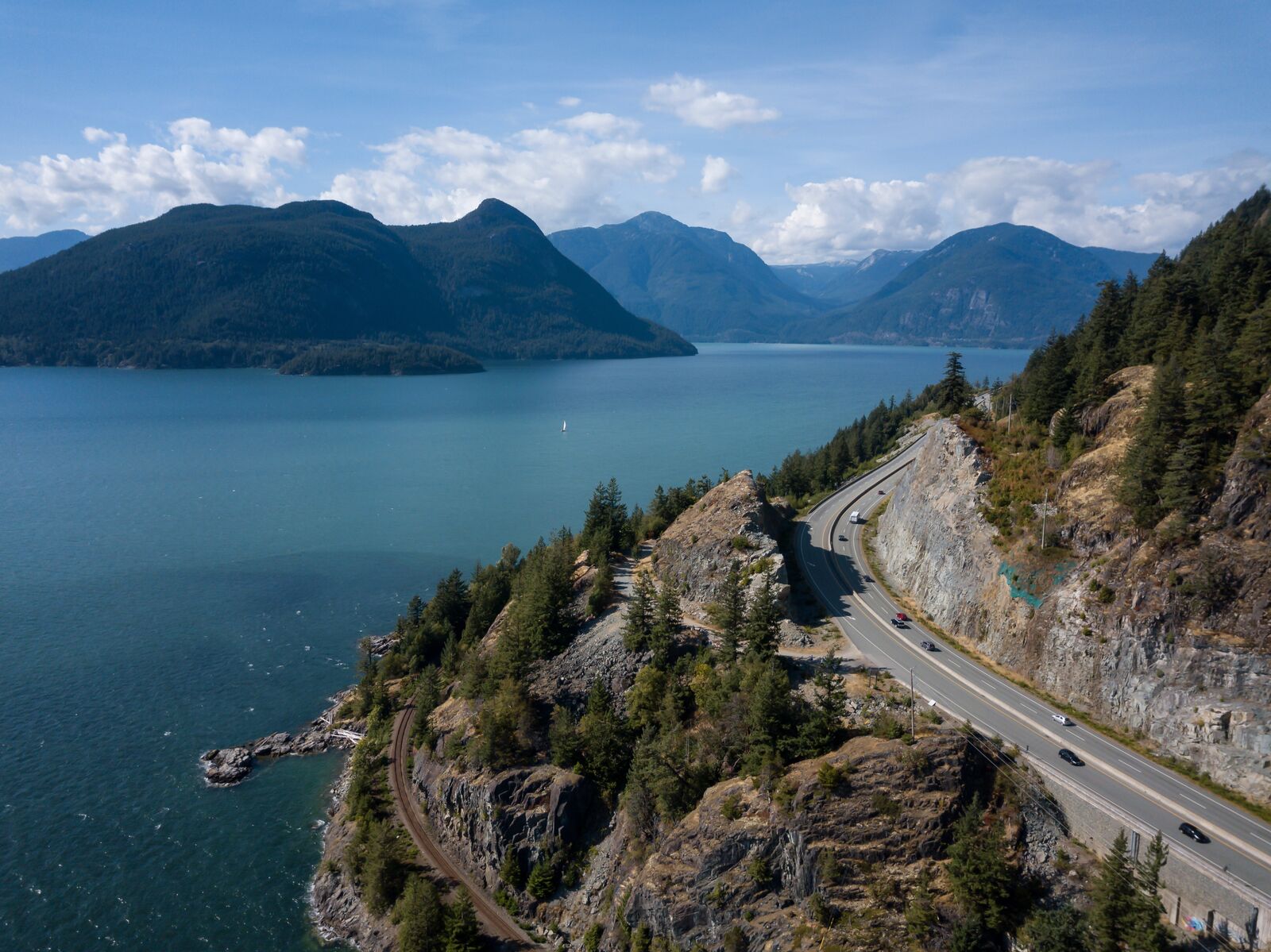 There aren’t many Canadian highways that match the steepness of the US, and that’s for a good reason. With more snow, colder winters, and taller mountains than their neighbors to the south, the mountains in British Columbia are no joke to traverse, even in the best of conditions. As such, there are limited options to travel through parts of the country.

However, there is one notable route through the mountains: Highway 99. It connects Vancouver to the other side of the mountains near the Alberta border, crossing north of Whistler in the process. And it’s not without its trials.

The highway is constantly under inclement weather warnings for rain and snow. Now pin on an 11-percent grade near the peak, and it’s no surprise the locals have nicknamed this road the “Highway of Death” and the “Ski-And-Die Highway.” However, travelers willing to drive the stretch can stop at Garibaldi Provincial Park and hike to the famous lake’s narrow cliff edges, which offer breathtaking views. The road is considered one of Canada’s steepest, but also one of Canada’s most beautiful.

TravelThe Optimal Itinerary for a US National Park Road Trip, Mapped
Tagged
Outdoor Road Trips
What did you think of this story?
Meh
Good
Awesome