Americans have always had a fascination with the Wild West. The gunfights, rodeos, tumbleweeds, and dusty saloons of America’s untamed frontier might sound like cinematic tropes, but they’re also a very real part of the country’s history. The Wild West represents a unique period in the growth of the US, when borders were being expanded and new lands discovered during the late 19th century.

Sure, Hollywood has dramatized the Wild West and turned it into a cinematic cliche, but that doesn’t detract from the period’s historic significance or how its cowboys, crooks, and gamblers have captured our imaginations. The days of Wyatt Earpp and Billy the Kid may be over, but there are still several towns throughout the US that evoke that old fashioned Wild West spirit. Here are the ones you can visit. 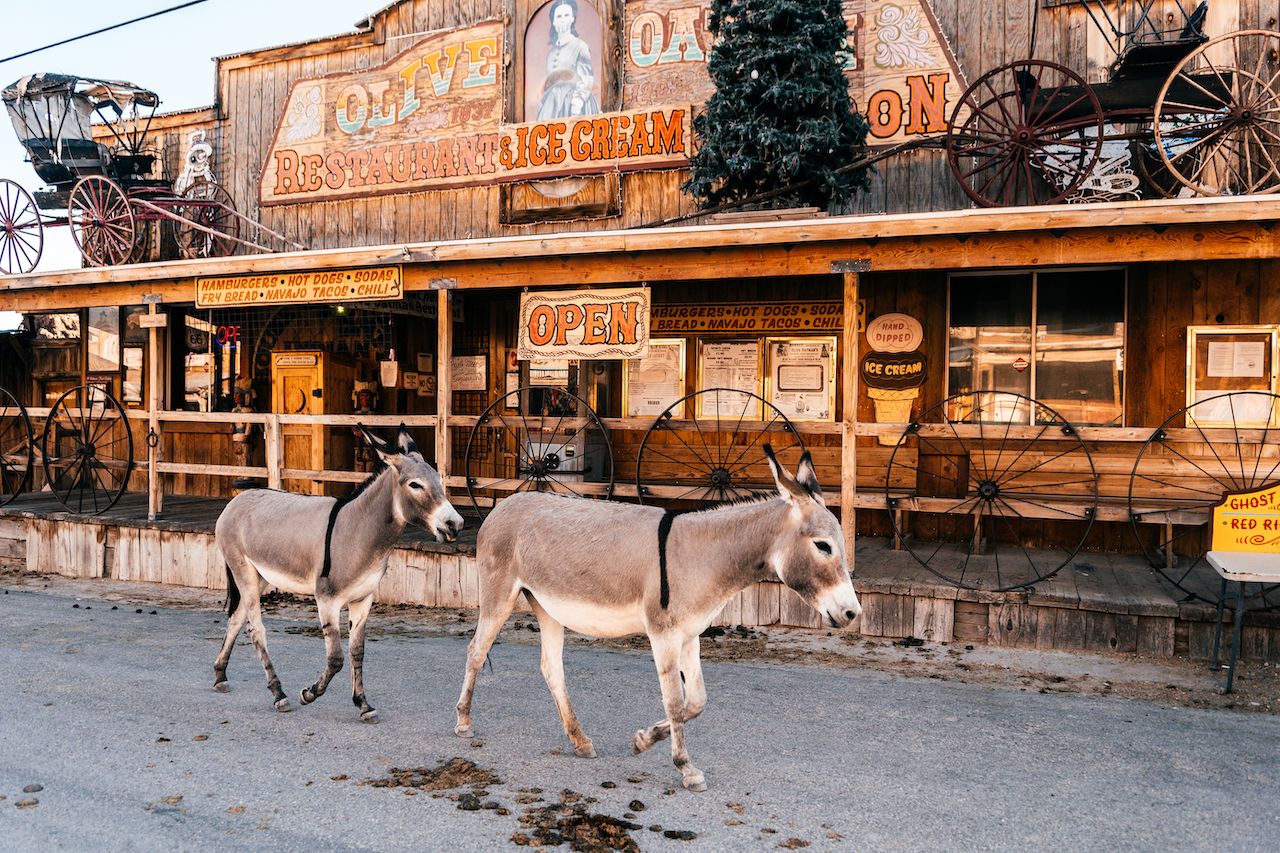 Like many towns that boomed during the late 1800s, Oatman rose to prominence as a gold mining town. The mines in Oatman were some of the largest in the West, and even after those mines dried up, the town became a popular pit stop for visitors traveling along Route 66. The town was named after a woman named Olive Oatman, who was kidnapped by an Apache tribe and then sold as a slave to Mohave indians. The story does have a happy ending, however, as Oatman eventually gained her freedom.

Now, it doesn’t take a huge stretch of the imagination to picture the town in its Wild West days. Oatman is filled with wild donkeys roaming the streets, dusty roads, and shops with old wooden porches. You can visit the Oatman Jail and Museum to view the town’s old holding pens and sheriff’s office, or check out the several local shops selling classic Americana. Also be sure to catch the Ghost Rider Gunfighters show in the town center, which takes place daily at 1:30 PM and 3:30 PM. 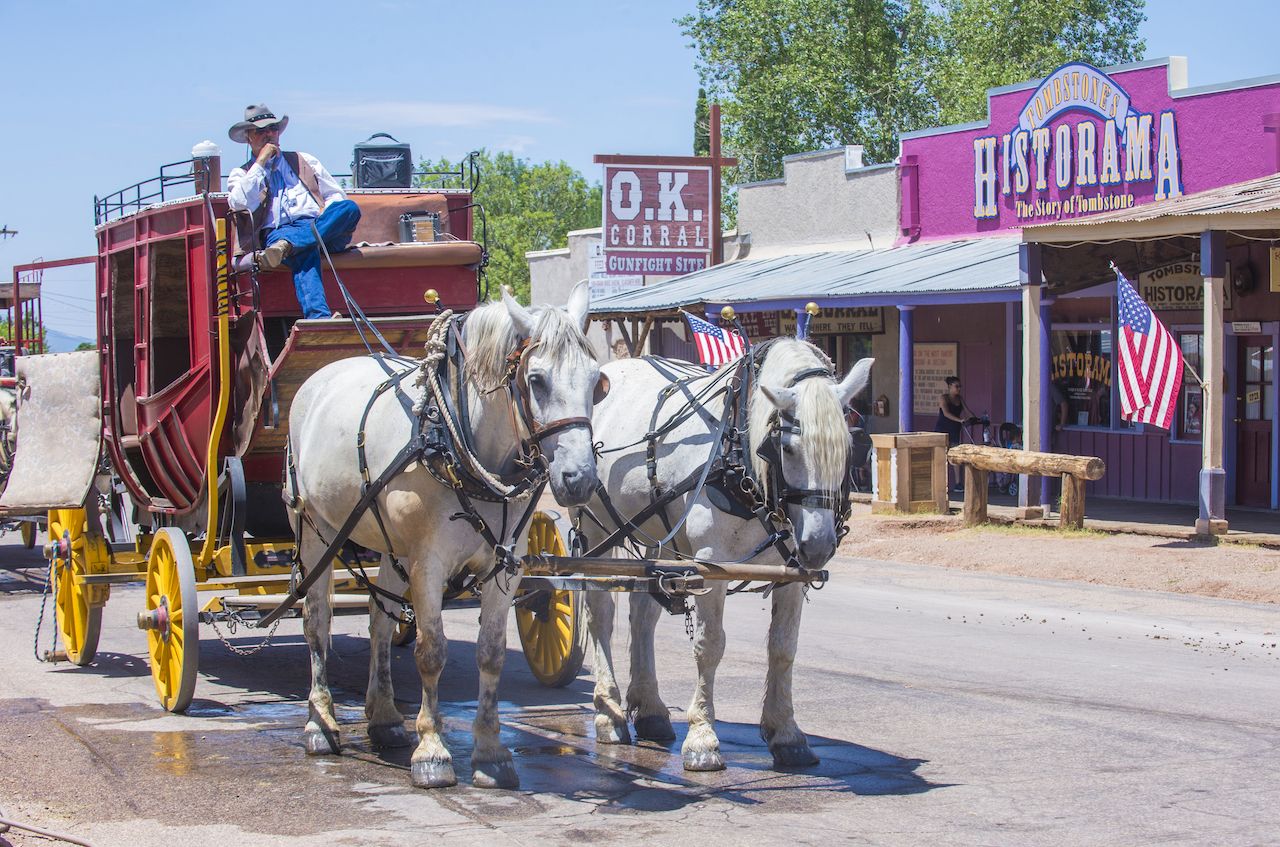 The entire town of Tombstone was awarded National Landmark District status in 1961, as “one of the best preserved specimens of the rugged frontier of the 1870s and 1880s.” If that’s not enough incentive to visit, it’s also nicknamed “The Town Too Tough to Die,” which is the most Wild West moniker you could possibly imagine. Founded in 1877 by prospector Ed Schiefflein, who discovered silver in the area, Tombstone was the setting of perhaps the most legendary event in Wild West history: the Gunfight at the O.K. Corral.

The shootout pitted Wyatt, Virgil, and Morgan Earpp and Doc Holliday against Ike and Billy Clanton, Billy Claiborne, and Tom and Frank McLaury. The shootout only last 30 seconds, but it resulted in the deaths of Billy Clanton and the McLaury brothers. Fittingly, Schieffelin called the town “Tombstone” because he was initially told he would find nothing there but his own tombstone.

You can still visit the O.K. Corral and view reenactments of the famous gunfight, or even spend the day at the Tombstone Wild West Theme Park where there are daily gunfight shows (no, you don’t have to participate). For a break from the shootouts, take a ghost tour at the Bird Cage Theater, which was a popular 1880s drinking, gambling, and performance venue in which 26 people were reportedly killed. Slightly less-grim options include the Rose Tree Museum & Bookstore, home of the world’s largest Rose Tree; the Tombstone Epitaph newspaper building; and the Tombstone Courthouse State Historic Park. 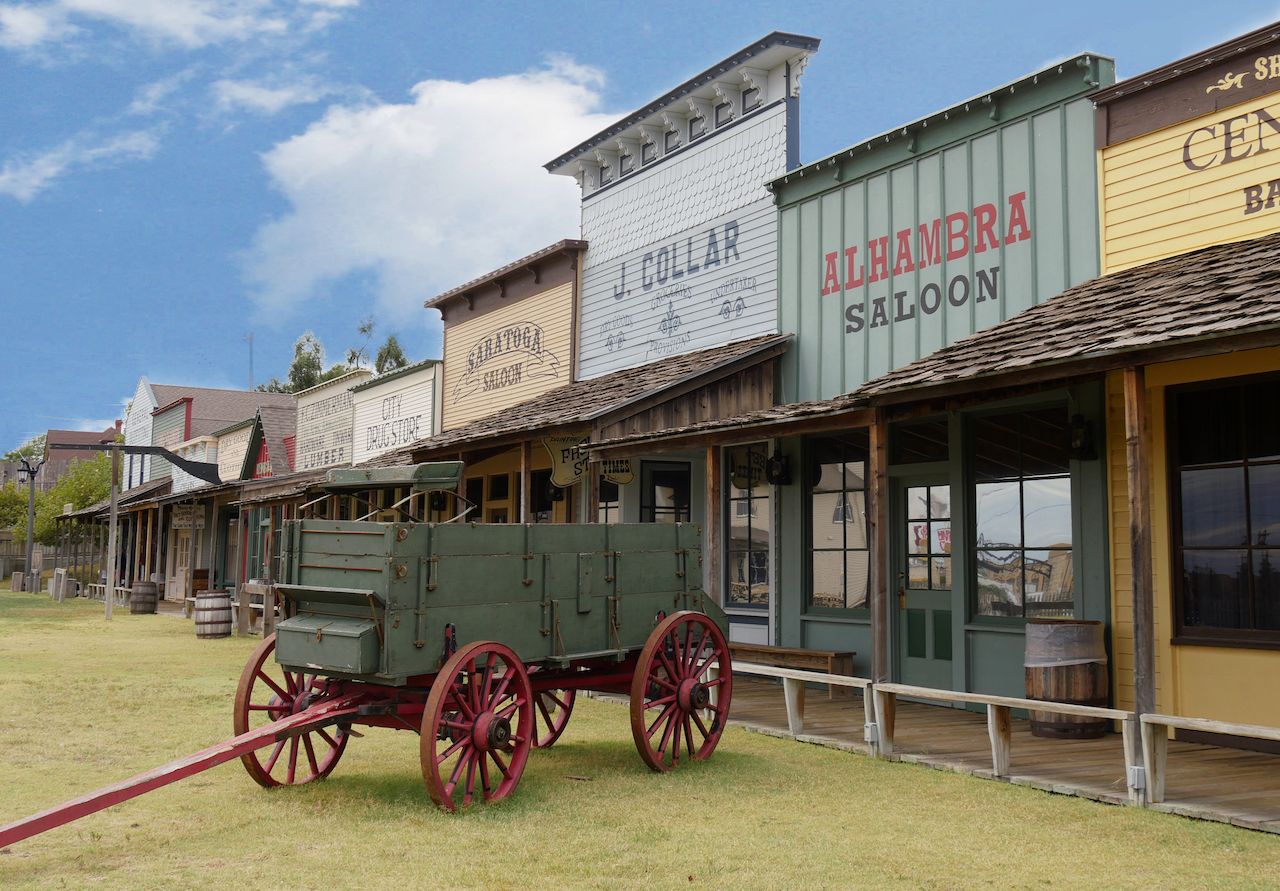 Everyone knows the expression “get the hell out of Dodge,” but in reality, you should probably get the hell to Dodge. Dodge was nicknamed the “Queen of the Cowtowns” due to the herds of longhorns shipped there, but it’s probably better known for its abundance of gunfighters and brothels. It earned a reputation as one of the most sinful towns in the West by the end of the 1800s.

Nowadays the town has shed its gunfighting reputation and leaned into its cattle history. A hub for the meatpacking industry, Dodge hosts the Dodge City Days annual festival — a 10-day festival featuring a longhorn cattle drive and the Dodge City Roundup Rodeo. Remnants of Doge’s days of infamy are alive and well, however, with the Longbranch Saloon and Gospel Hill accessible via trolley ride. You can also take a walking tour along the Dodge City Trail of Fame, which commemorates the famous Wild West residents of Dodge, or kick back at Miss Kitty’s Long Branch Saloon just like the gunslingers used to do. 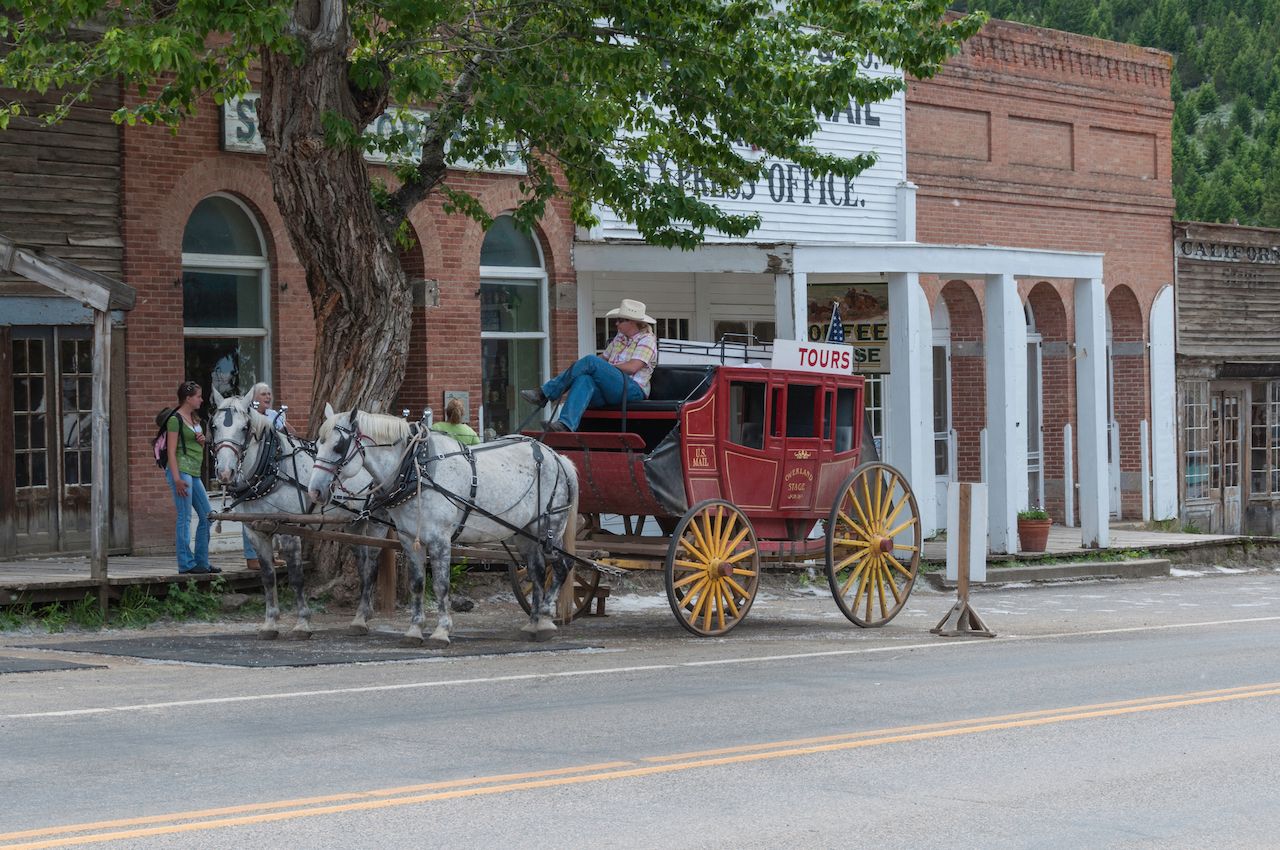 Before Las Vegas and Reno, Virginia City was Nevada’s premier destination. A booming mining town established in 1859 during the discovery of a major silver deposit called the Comstock Lode, the town was named after Virginia miner James “Old Virginny” Finney. Virginia City was a major hub for gold and silver barons throughout the 1860s and ‘70s but now serves as a monument to its former glory days. Wooden boardwalks lead you alongside restored 19th-century buildings, including historic saloons, and plenty of museums.

Like many Wild West towns, Virginia City has a trolley tour that brings you through the major landmarks. There are a whopping 17 museums, among them the mining and blacksmithing Way It Was Museum, Courthouse Slammer & County Museum, and the Comstock Gold Mill. You also have to stop in at the Ponderosa Saloon, a quirky bar that’s as Wild West as it gets. It has a walk-in bank vault from 1964, as well as an abandoned gold mine underneath the bar. A half-hour guided tour will bring you through the mine shaft, which has proven to be one of the town’s most popular tourist draws. 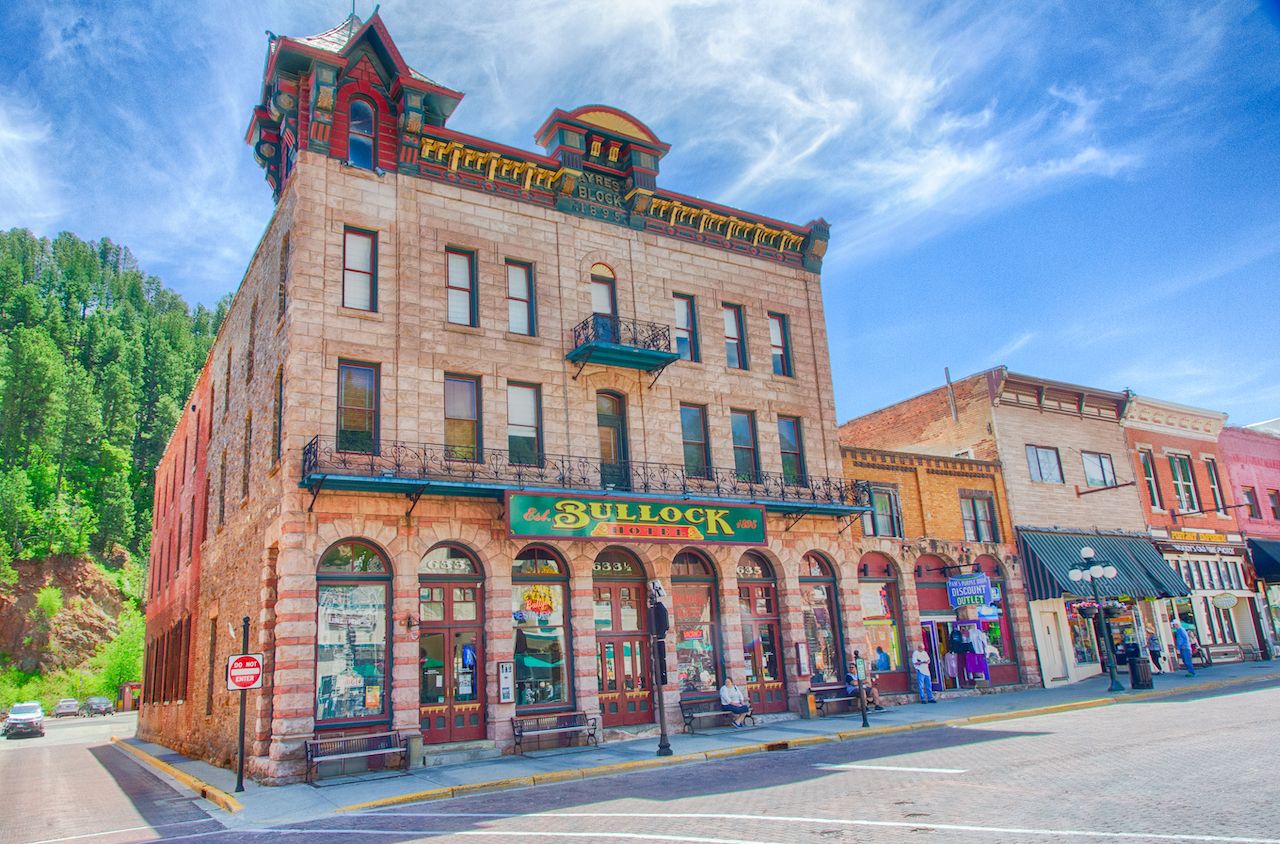 One of the most famous Wild West towns in the country is Deadwood, South Dakota. After gold was discovered in the Black Hills in 1874, people flocked to the Deadwood area to make their fortune. The promise of wealth lured outlaws, gamblers, and gunslingers who transformed the town into a vibrant and often dangerous place. You’ve probably heard of some of Deadwood’s most famous residents, like Calamity Jane and Wild Bill Hickock. Hickock was shot and killed in Deadwood while holding the infamous Dead Man’s Hand (aces and eights) during a poker game. Perhaps most well-known as the setting of HBO’s popular Deadwood series, the town is now a National Historic Landmark with a wealth of preserved history.

For true history buffs, you can actually visit the graves of Wild Bill Hickock and Calamity Jane at Mount Moriah Cemetery. If you’d prefer something a little less morbid, there are plenty of period museums like the Days of 76 Museum and the Adams Museum. You can even pan for gold at the Lost Boot Mine, but don’t expect to strike it rich.

Speaking of not quitting your day job, gambling is still alive and well in Deadwood, though it’s evolved somewhat from backroom poker games to more modern establishments. You’ll probably still lose, but at least you don’t have to keep your head on a swivel for gunslingers. 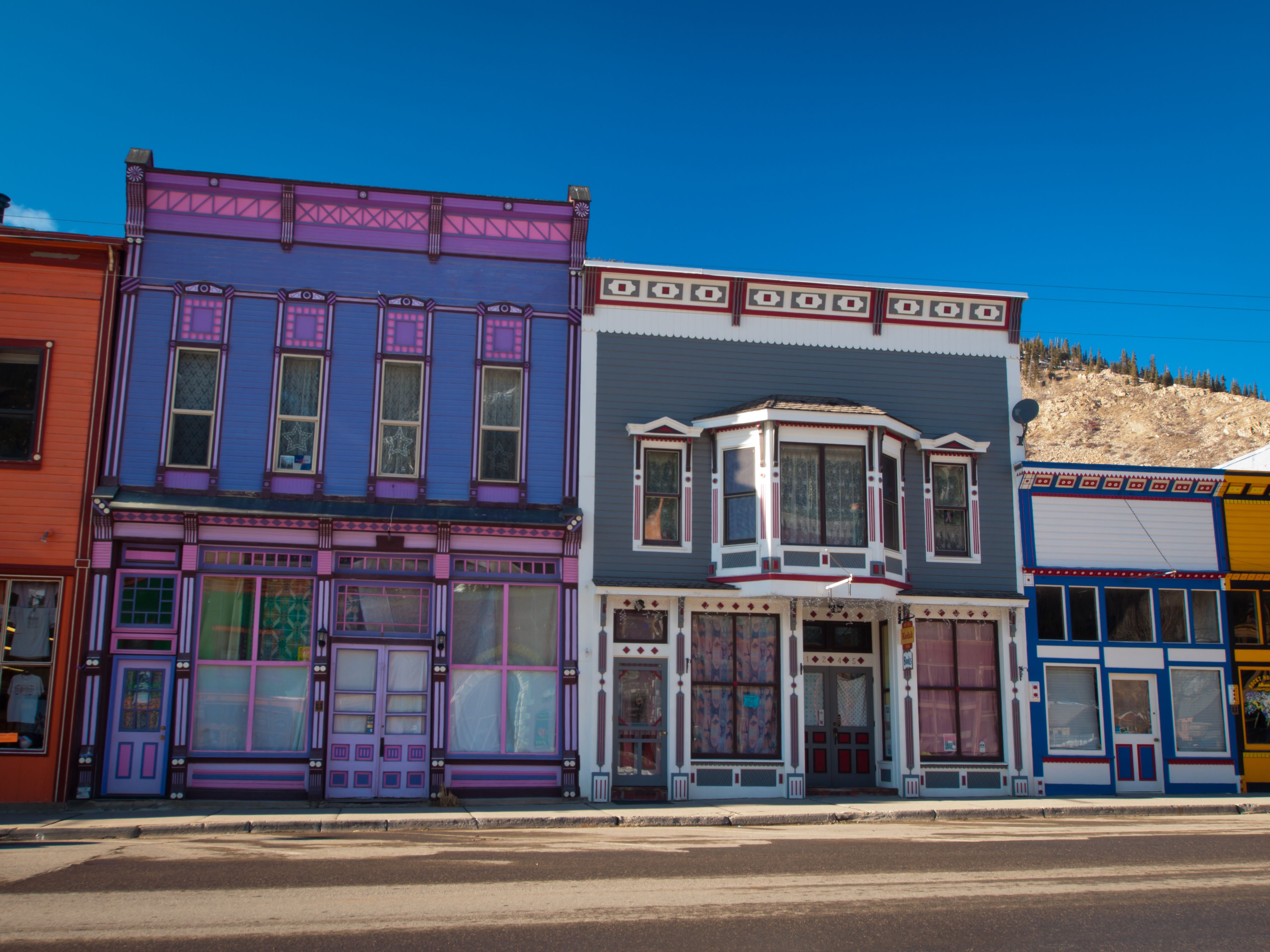 Silverton might be the highest Wild West town in the country — and no, that’s not a swipe at Denver. At an elevation of 9,180 feet, situated between two San Juan Mountain passes, Silverton was dubbed the “Mining Town That Never Quit.” It started booming around 1873, with settlers pouring into Silverton seeking gold and silver around the creeks and rivers. Soon it became the lynchpin for several small towns sprouting up around the area’s largest mines. Its biggest claim to fame wasn’t precious metal, however, but its red light district, which featured dance halls, saloons, and bordellos.

These days Silverton is a little more respectable. Instead of housing drunkards and crooks, the old Silverton jail is home to the San Juan County Historical Society Mining Heritage Center. And while the gold mine might be all dried up, you can still take the Old Hundred Gold Mine Tour, which lets you ride an electric mine train into the Galena Mountain, and watch immersive mining demos that use authentic machines dating back nearly 100 years. The Silverton experience wouldn’t be complete, however, without riding on the Durango & Silverton Narrow Gauge Railroad, a historic coal-fired, steam-powered locomotive that travels through canyons and forest between Durango and Silverton. 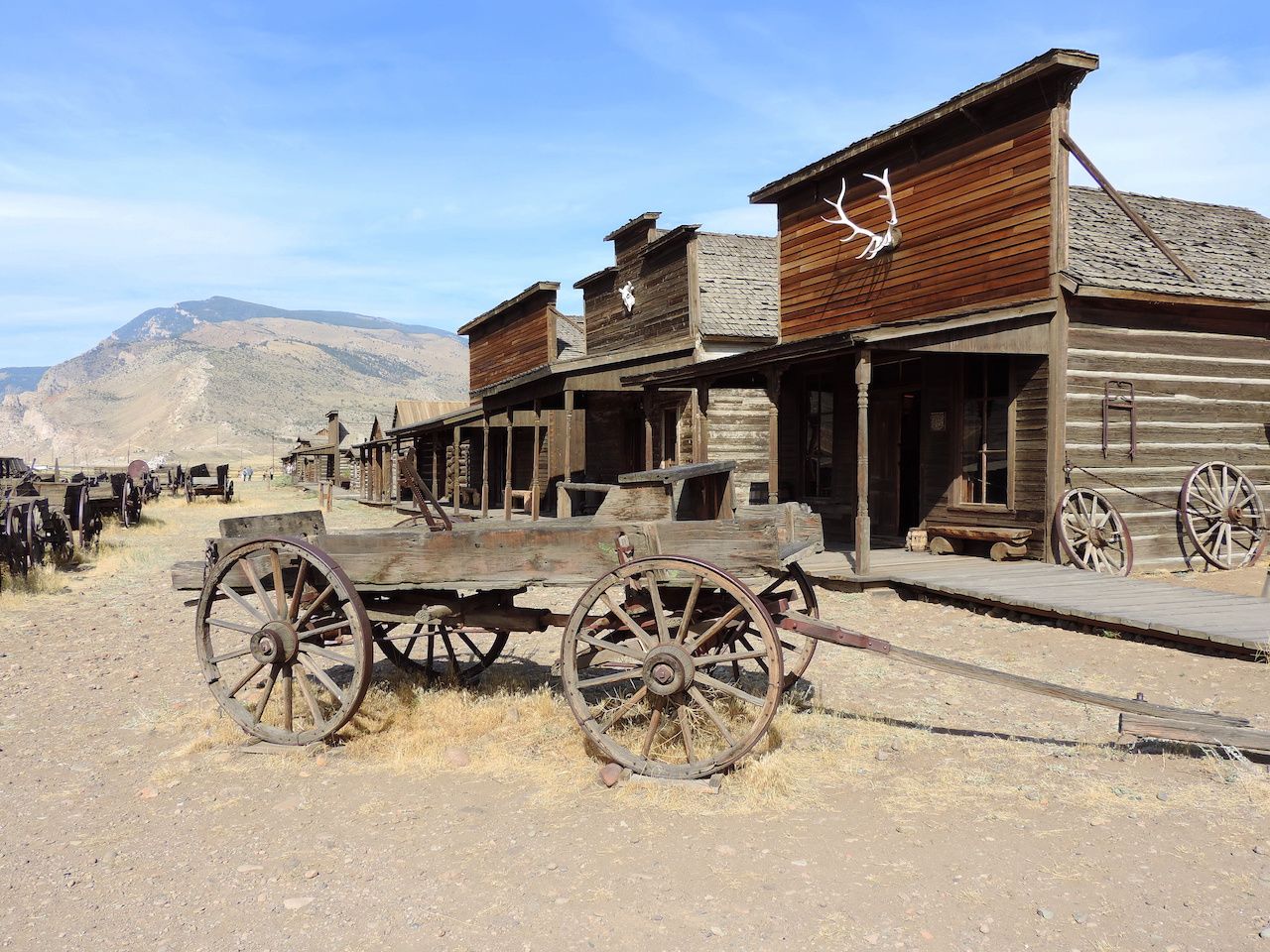 Anywhere that calls itself the “Rodeo Capital of the World” should probably be on your Wild West bucket list. Cody is the home of Buffalo Bill, the showman famous for his “Buffalo Bill’s Wild West” shows, which are credited with the popularization and proliferation of rodeos. There are an abundance of monuments of the Wild West in Cody, most notably the Old Trail Town, which includes Wild West artifacts like Butch Cassidy’s cabin, the grave of mountain man John Johnson, a saloon frequented by the famous outlaw Hole-in-the-Wall Gang, and the home of Curley, the Indian scout who survived the Battle of the Little Big Horn.

In addition to the trail, you can check out the Buffalo Bill Museum, Plains Indians Museum, Whitney Western Art Museum, Draper Natural History Museum, and the Cody Firearms Museum. You can even book a ranch tour and learn how to shoot a rifle. And if you happen to be visiting the “Rodeo Capital of the World” between June 1 and August 31, you’d be doing yourself a disservice if you didn’t see a rodeo. The Cody Nite Rodeo takes place every night and is truly one of the most unique rodeo experiences you’ll get in the West.

CultureDeadwood Is a Real Place You Can Visit, and It’s the Best Wild West Reenactment in the World
Tagged
Culture Family Travel United States
What did you think of this story?
Meh
Good
Awesome