Usually, when gunshots ring out in the middle of the street, it’s not the sign of a good vacation.

That was my first thought, at least, when my evening stroll to happy hour was interrupted by an enormously loud “BANG” that made me jump straight up in the air.

“Guuuuuuuun fiiiiiiiiiiight!!!!” a young man in a cowboy hat yelled as he stood in the middle of the street, pistol in the air. Normally, I’d call the nearest embassy and suggest a travel advisory.

“Is that a real gun?” a kid who looked about five-years-old asked his older brother, who was walking about 10 feet behind me.

He was, thankfully, joking with his little brother. Because, also thankfully, we were not in a war zone but rather in Deadwood, South Dakota, where “gunfights” are just part of the daily entertainment.

The live-action shootouts are part of why people come to this little town in the Black Hills of South Dakota. A place where the Wild West still lives in the brick streets and aging saloons, and it’s turned a violent past into a family attraction.

The “wickedest place on Earth” was wild long before HBO 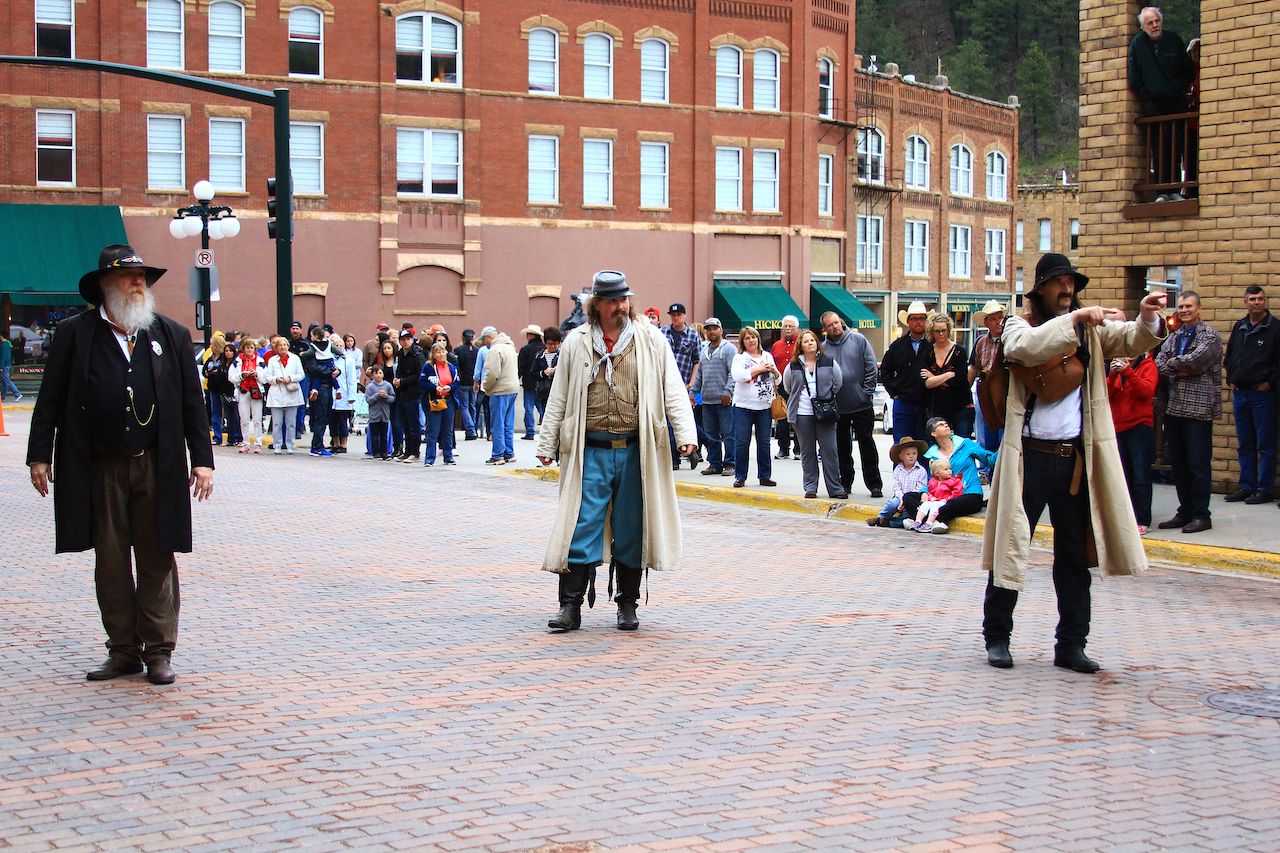 If you’re a fan of the Deadwood TV show — and the corresponding movie that premiered last week — you might assume Deadwood is a sort of TV theme town created to capitalize on the show’s success. The pristine old-West facades and campy shoot-em-ups in the historic downtown certainly feel a little like a Universal Studios backlot. But rest assured, it is quite the reverse.

The TV show is a not-completely-accurate depiction of life in Deadwood in and around its gold rush of the 1870s. It kicked off in 1875 when prospectors found gold in this barren little gulch. Within a year, over 5,000 miners had come in search of a quick fortune. And cramming 5,000 dirty, desperate men between two tall mountains is never a recipe for peace and quiet.

Along with the miners came plenty of people trying to separate them from their gold, from prostitutes to saloon owners to gamblers. Law enforcement was about as common as showers. And in its heyday, the city saw nearly a death a day from crime, suicide, or disease.

In just a year, it became known as “the wickedest place on Earth.” 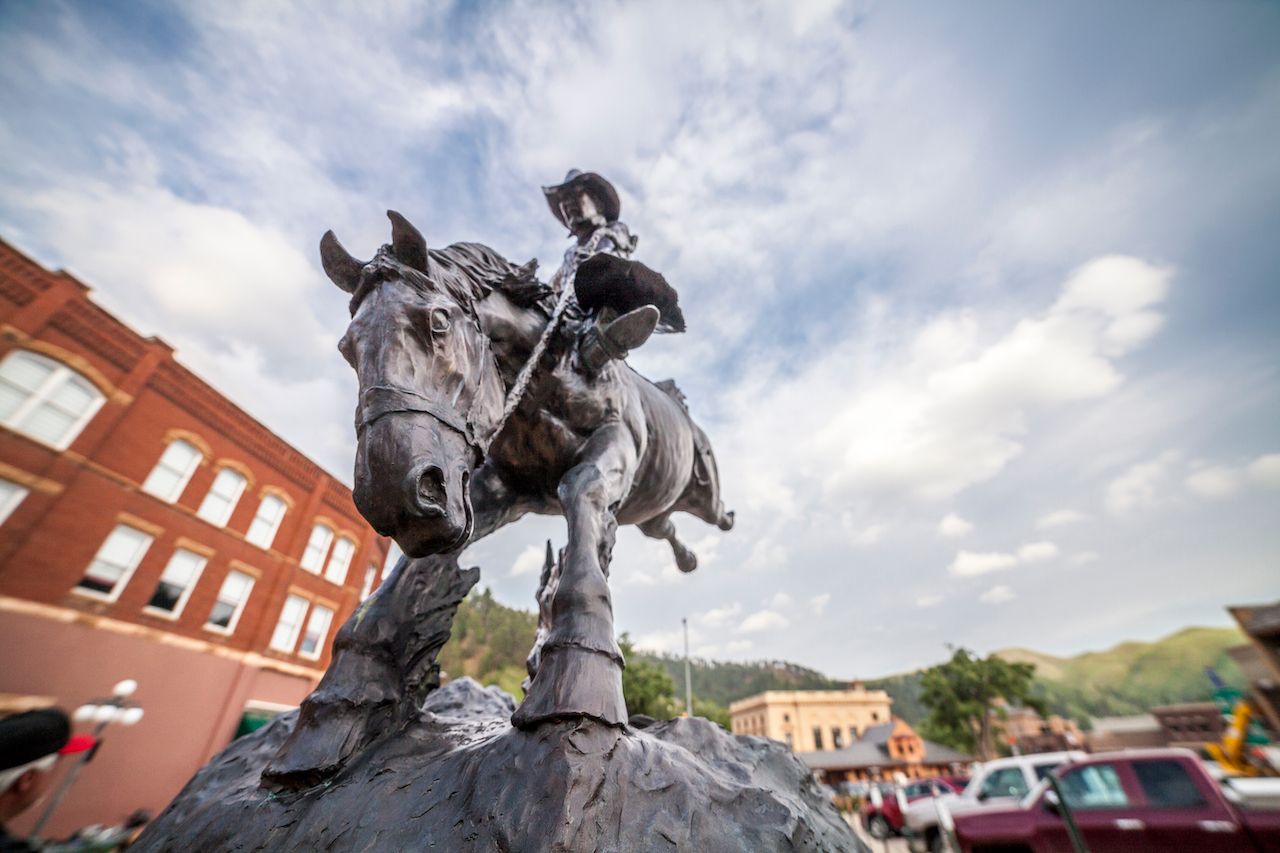 This den of sin and riches brought all the characters of the Wild West, from “Wild Bill” Hickock to Calamity Jane, and others with names like Potato Creek Johnnie and Deadwood Dick. Hickock lasted only a couple of months before getting shot during a poker game. Shortly after, notorious lawman Seth Bullock finally brought some semblance of order.

Eventually, the gold boom ended. And a series of fires, floods, and other disasters emptied the city of its violent reputation. It then turned to tourism to keep the economy going, and prostitution was legal here until the early 1980s.

“We used to get thousands of men coming here for deer hunting every year,” Andy “Cookie” Mosher tells me as we stand near the spot where Wild Bill was shot. He is my tour guide, dressed in period costume as Con Stapleton, Deadwood’s only Federal Marshall. “Only thing is, you seen the deer around here, right? They ain’t very big. They were all coming here for this.”

He motions to the upper floors of the saloons across the street. The buildings date back to the 1880s and were once home to numerous brothels marked by colored doors. Those brothels were Deadwood’s biggest tourist attraction until a federal raid in 1980. Cookie says the upstairs has sat untouched ever since. Talk of a brothel museum is bubbling.

Despite being designated a National Historic Landmark, Deadwood fell into disrepair. That changed in 1989 when the state allowed it to become the only place outside Las Vegas and Atlantic City with legalized gambling. With one vice gone, another one filled the void. And Deadwood, once again, became a destination for people looking to do things they wouldn’t dare at home.

A haunted past leads to a family-friendly present 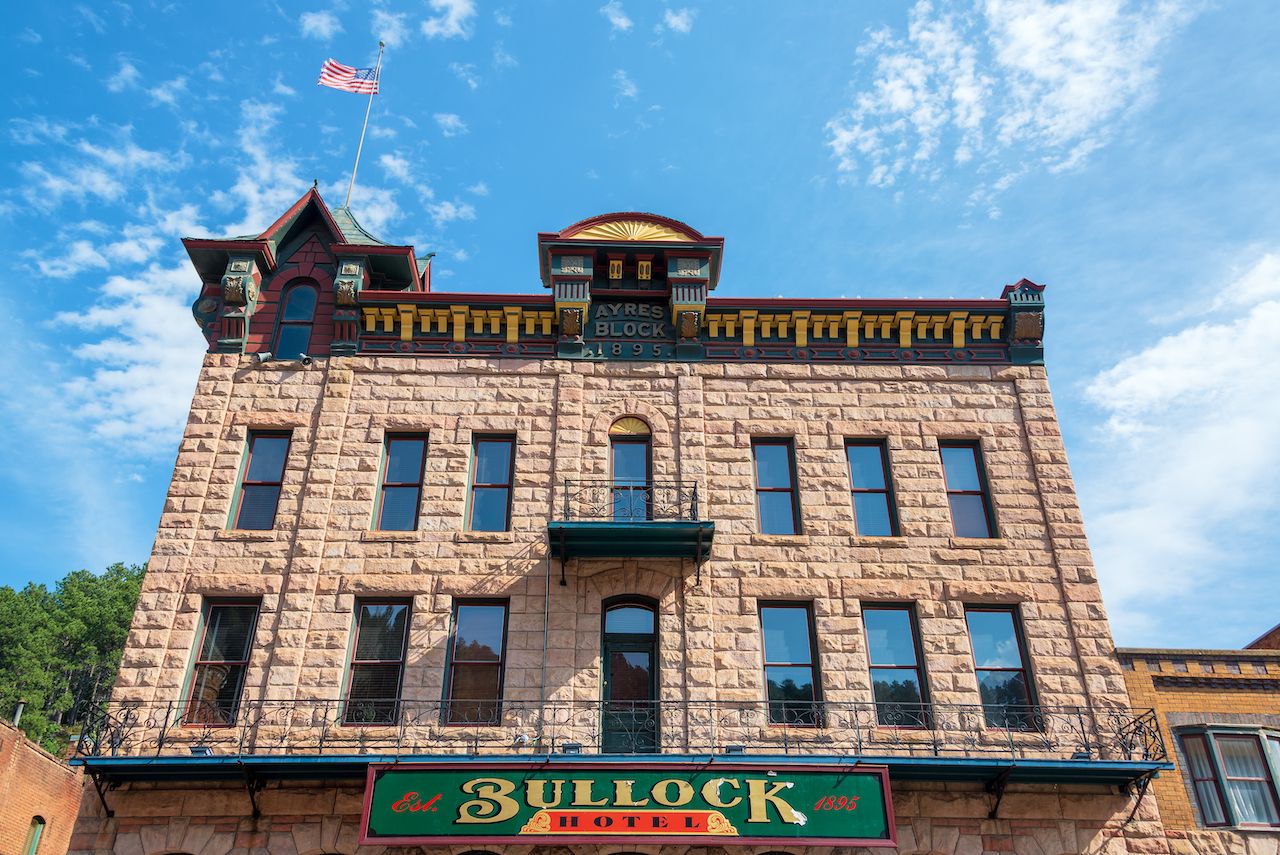 The tour group looked very confused when I walked out of my hotel room. Almost as confused as I was that an entire group of tourists was standing outside my front door.

“Y’all waiting for me?” I asked them. They laughed. “I’m the ghost of Seth Bullock. What, you never seen a sheriff in a Hawaiian shirt? I was Don Ho before Don Ho was Don Ho.”

Unbeknownst to me, my room in the Bullock Hotel on Main Street sat right next to a mirror rumored to be a portal to the great beyond. As far as I could tell, the only thing on the other side of that mirror was my bathroom, which didn’t even have a mysteriously leaky faucet. But the tour group seemed enamored, so I stuck around to hear the story.

“It wasn’t uncommon for Deadwood to see a murder a day,” the guide continued. “That’s why Deadwood is known as the City of Ghosts. Not just the gunfights and suicides, we had cholera and smallpox, and hundreds of children died in this very hotel.”

That was a little unsettling. As was the rest of the tour where he showed photographs of a creepy little girl mysteriously appearing in the frame. The Bullock Hotel, built by the famous lawman as the pinnacle of late-19th-century luxury, is but one of many haunted buildings in Deadwood, which trades in its ghostly past almost as much as it does its slot machines.

After the tour, I continued to the bar at the Franklin Hotel, which gave me a birds-eye view to the afternoon gunfight. Before the fight, Cookie Mosher swore in a bunch of little kids as his deputies, who helped him apprehend the “weasel” he eventually shot. 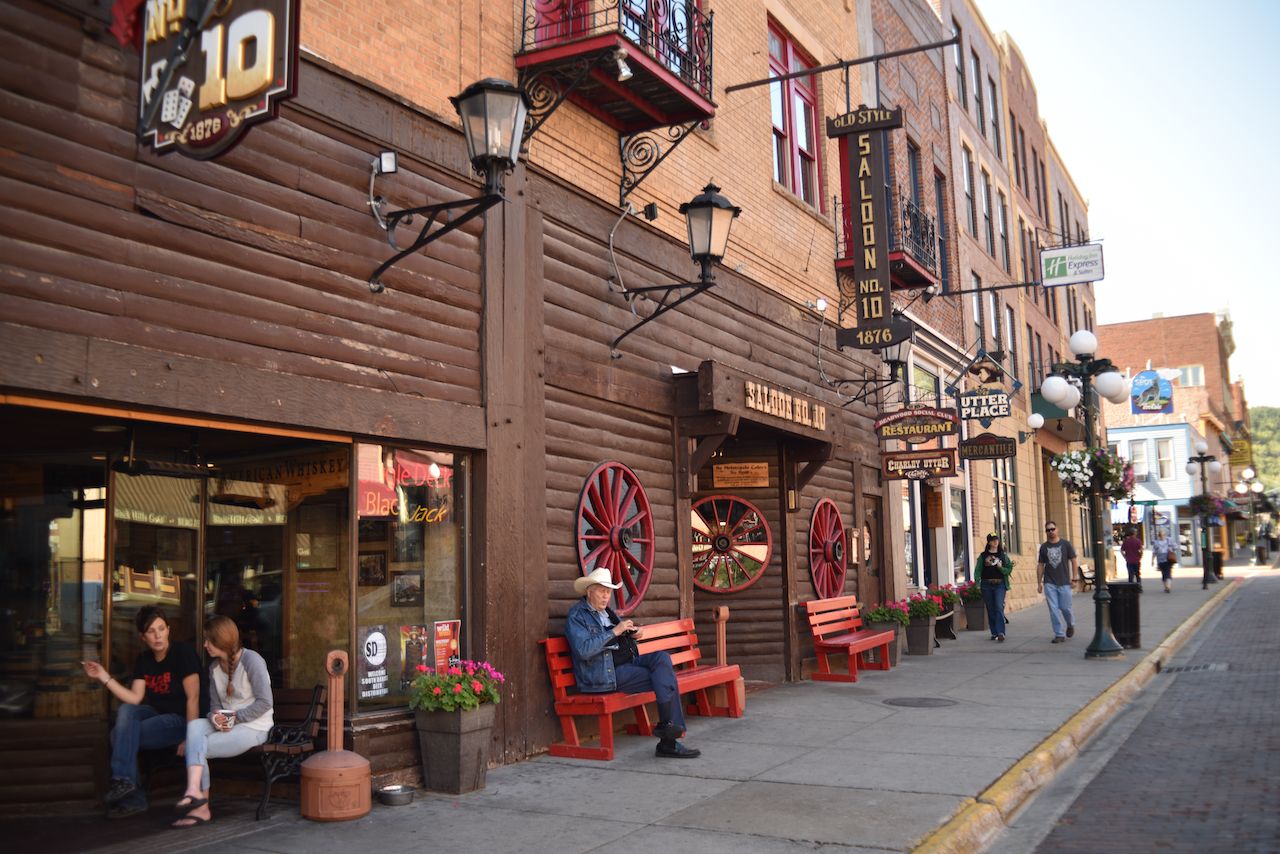 After that, I walked down to Saloon No. 10, which, though it shared a name with the saloon where Wild Bill Hickock was shot, is not the same place. This minor detail is overlooked, as Wild Bill’s assassination is re-enacted four times a day.

He begins the re-enactment next to a poker table set up in the back of the sawdust-floored saloon. He tells the story of how Wild Bill ended up in Deadwood, and how he made his money not mining for gold, but mining the miners during poker games.

“August first, I cleaned up,” he said. “August second, they had to clean me up.”

He asks for child volunteers from the audience, who portray his poker buddies during that fateful game. At one point, an actor playing Jack McCall strolls in, has some words with Wild Bill, and eventually shoots him in the back of the head. The kids playing poker in oversized hats laugh hysterically.

After the re-enacted assassination, you can walk out into the street to see a re-enactment of the capture of Jack McCall, then follow him on a sort of perp walk down Main Street to the Masonic Temple for a re-enactment of his one-day trial. 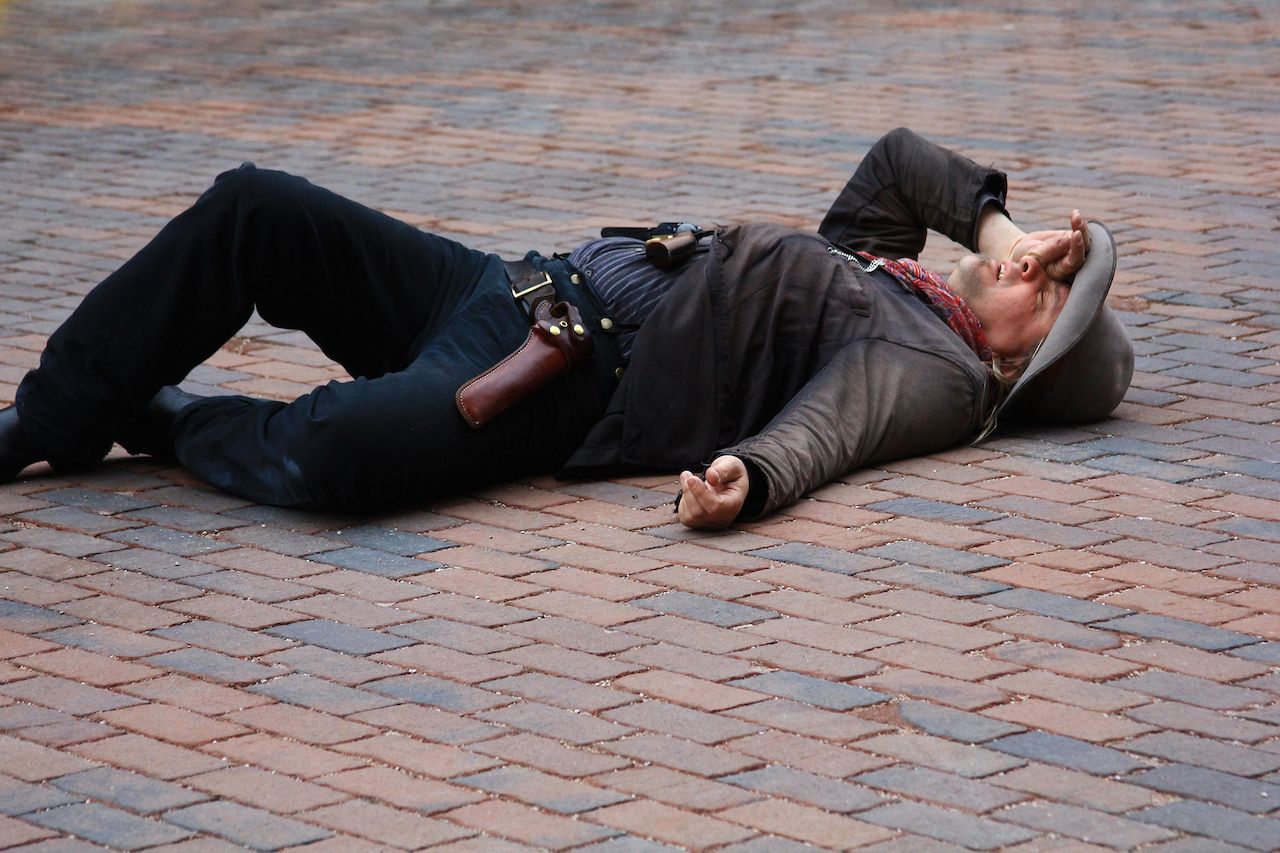 The re-enactment of The Trail of Jack McCall is the longest running stage play in America, and though it’s not winning any Tony Awards it does take its script almost word for word from newspaper stories of the time. The trial includes members of the audience called up as witnesses and a jury made up of children. Or, as the judge cleverly says, a jury of minors.

It ends with a fast acquittal, just like the real trial. And from there, it’s on to frequenting the same saloons as our heroes of the Wild West. Just now, they have craft beer.

The immersion into the Wild West doesn’t get old, and even though the city is chock full of tacky souvenir shops (which also sell drinks) and bad pizza, it’s a chance to experience what life was like during a time of complete lawlessness, cleaned up for family consumption.

Somehow, Deadwood has turned murder, prostitution, and degenerate drunkenness into a sort of South Dakota Disneyland, where pristine brick streets have immaculate stagecoach rides on the half hour. And the one time houses of ill repute sell coffee and ice cream.

You won’t find much of the HBO show here, beyond some autographed posters and names that ring a bell. But you will find a town that does the Wild West better than anyone. Just don’t be scared if just before happy hour you hear a barrage of gunshots.

TravelSouth Dakota Is the Most Underrated State in America. Here’s Why.
Tagged
Culture Entertainment Trip Planning TV South Dakota, United States
What did you think of this story?
Meh
Good
Awesome

South Dakota Is the Most Underrated State in America. Here’s Why.