Long musical chimes resonate among the chaotic taxi honks and revving motorcycles. A thick layer of smoke from hundreds of burning incense sticks envelops the corner of Ratchadamri Road and Phloen Chit Road in the district of Pathum Wan in Bangkok. Hidden behind the smoke sits a cross-legged golden statue inside a glittering, mosaic pavilion surrounded by stacks of bright marigold leis. Locals call it the four-faced Buddha (Phra Phrom) or Brahma, and it may just be the most famous religious legacy in Thailand.

Who is the four-faced Buddha and what’s it doing at a busy intersection? 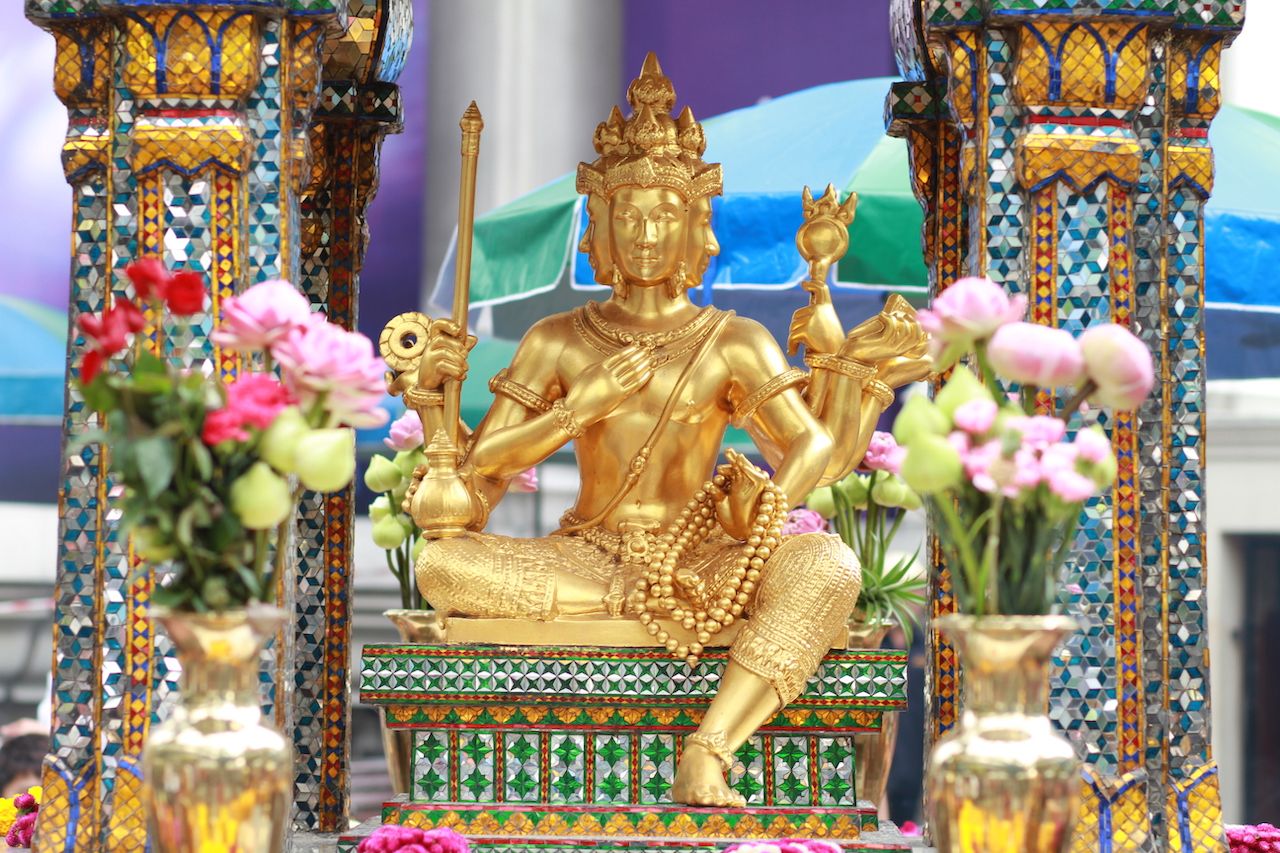 It was only a few decades ago that the Thai people created their own version of the Hindu god of creation, Brahma, at the Erawan Shrine. The initial idea was to ward off the curses and spirits that plagued the grounds of the Erawan Hotel next door. After a series of injuries to the workers and a sunken shipment of the hotel’s expensive marble stones, the shrine was erected, giving the rest of the hotel’s days a smooth sailing. Today, the Erawan Hotel no longer exists and has been replaced by the Grand Hyatt Erawan Hotel.

Locals and tourists now frequent the shrine for good luck and blessings as it’s known to grant whatever is wished. The shrine receives so much traffic that workers remove the offered flowers and incense sticks every few minutes.

Around the world, including cities like Vancouver, Taipei, and Hong Kong, replica shrines have been built by devotees to honor this divine guardian. 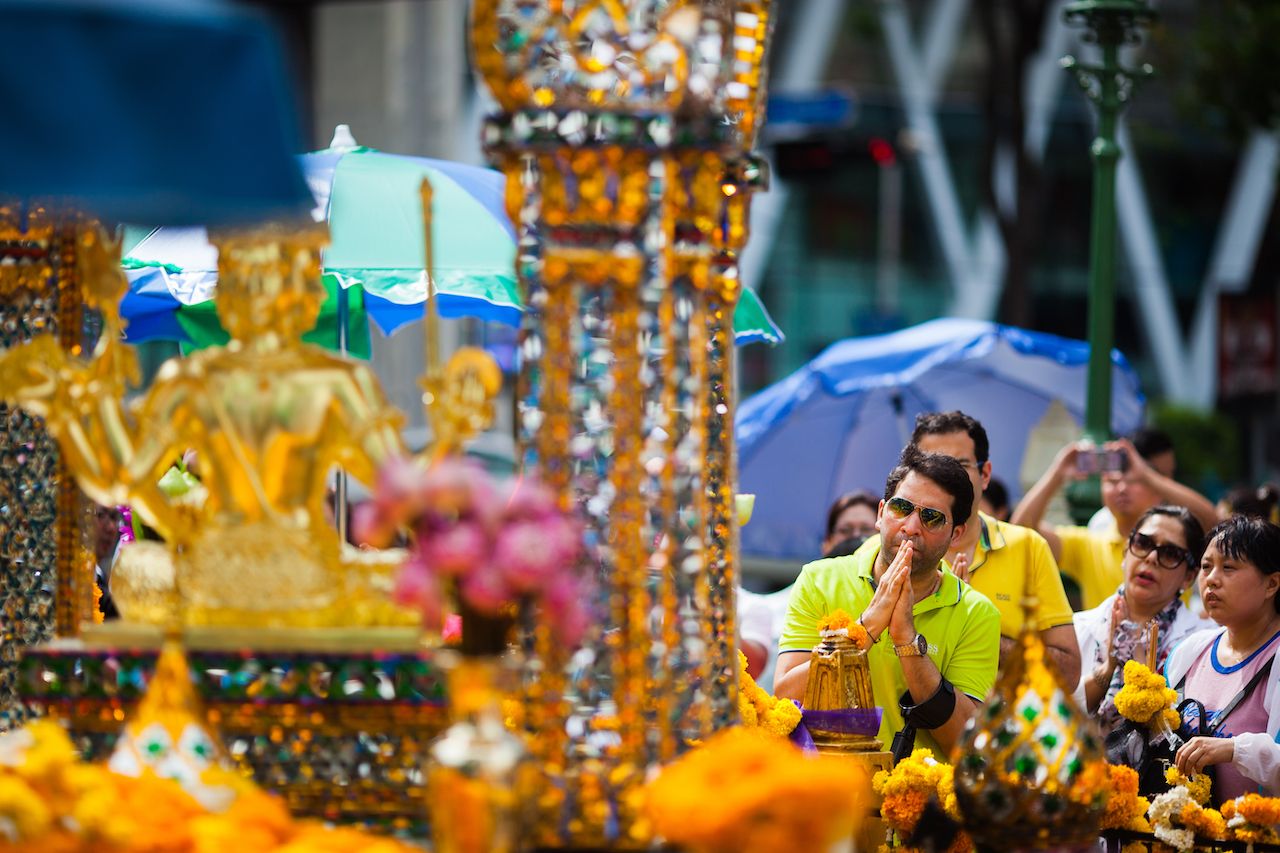 Like the original Hindu Brahma, the Buddha at Erawan Shrine has four faces. Facing the shrine’s entrance, the front face represents career and life. Continuing clockwise, the second is symbolic of relationship and family, the third is for wealth, and the last for wisdom and health. Locals believe that walking around the figure anti-clockwise is only recommended for those who partake in illegal businesses.

The Buddha has eight arms and hands, all of which carry significant meaning:

Hills of chained fresh marigold blooms, crown flowers, and jasmine buds dangle around the pavilion. Called phuang malai, chained flowers are offered for their bright yellow color, which symbolizes good luck and the everlasting mother nature. Visitors can buy garlands, incense, and worshipping items like wooden elephants, dancing figurines, and fresh, drinkable coconuts at a small booth at the back of the shrine. For $1.50, worshippers get a set that comes with four small phuang malai, four candles to drive away darkness, and a small pack of incense.

Along the left wall of the shrine, a fleet of large wooden elephants are decorated with squared gold flakes, which visitors can buy and stick onto the carvings for good luck. Devotees know to aim for the trunk for a showering of good fortune. Gold flakes cost $2 for five pieces. 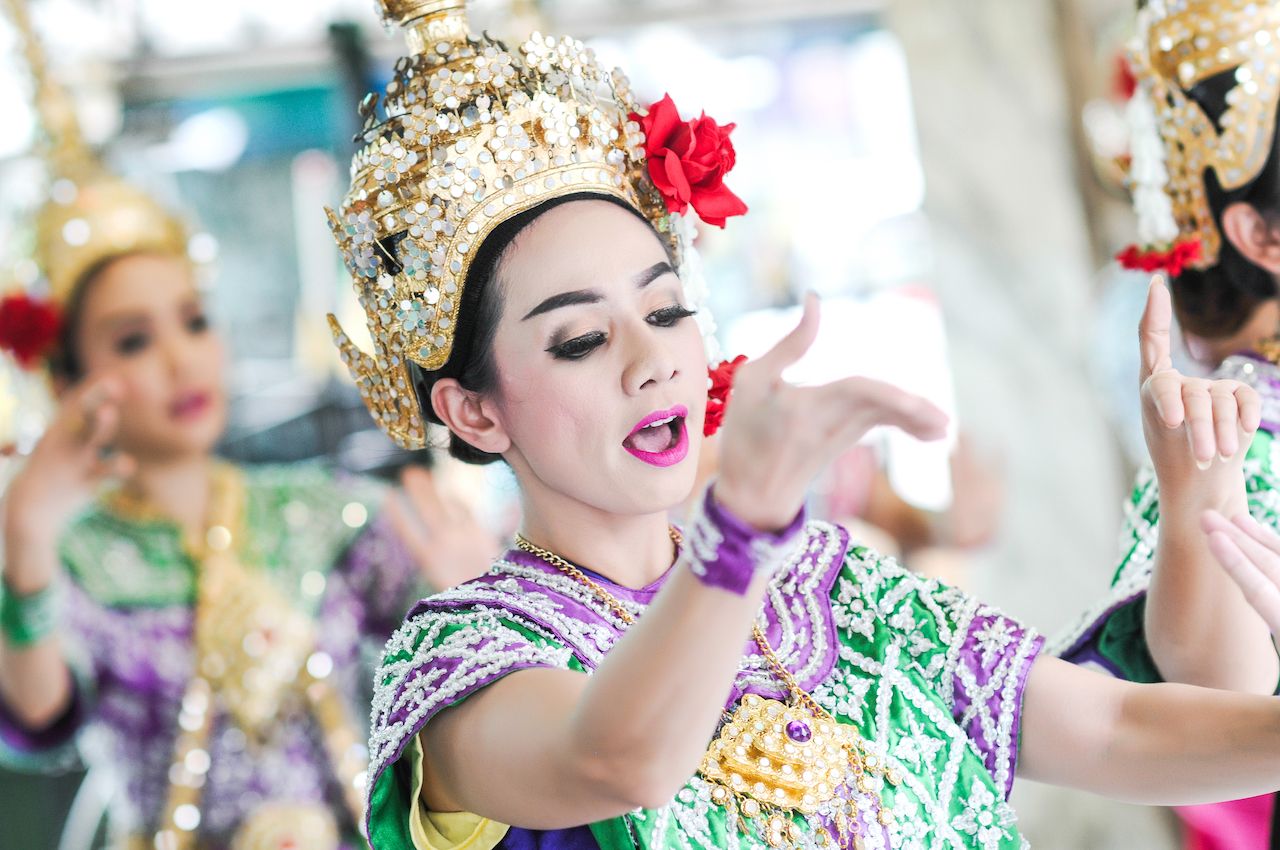 At the stage at the rear of the shrine, a group of dancers in silk costumes adorned with gold and silver sequins and tiered headdresses await their turns. Do not mistake their four-minute routines as performances for tourists — they dance for the Buddha. Devotees whose wishes are granted will hire the dancers to perform to thank the deity. Their counterparts, dancing figurines, are also placed on the Buddha’s offering tables after a granted wish. Dancing performances cost anywhere from $15 to $80 and can be arranged at a registration desk beside the stage.

Brahma is said to be born from a lotus, so devotees at the Erawan Shrine will ask for a lotus flower from staff at the pavilion. They dip the tip of the bloom in sacred water stored in a basin at the left corner of the shrine and sprinkle it onto themselves to get rid of bad luck. Visitors are welcomed to use the water to wash away bad luck, even without a lotus flower.

For those looking to carry the power of the deity with them everywhere they go, staff at the pavilion sell a small amulet where the Buddha is encased in glass for $8. Large ones cost from $16 to $25.

To pray, head to the front of the Buddha and bow three times. Then place the incense and candle into the sandpit and the garland onto the fence around the pavilion. Make sure to walk clockwise to all four faces. You may make a wish, but if you do, remember to state how you plan to thank the Buddha when it comes true.

Rules and tips to know before visiting the Erawan Shrine 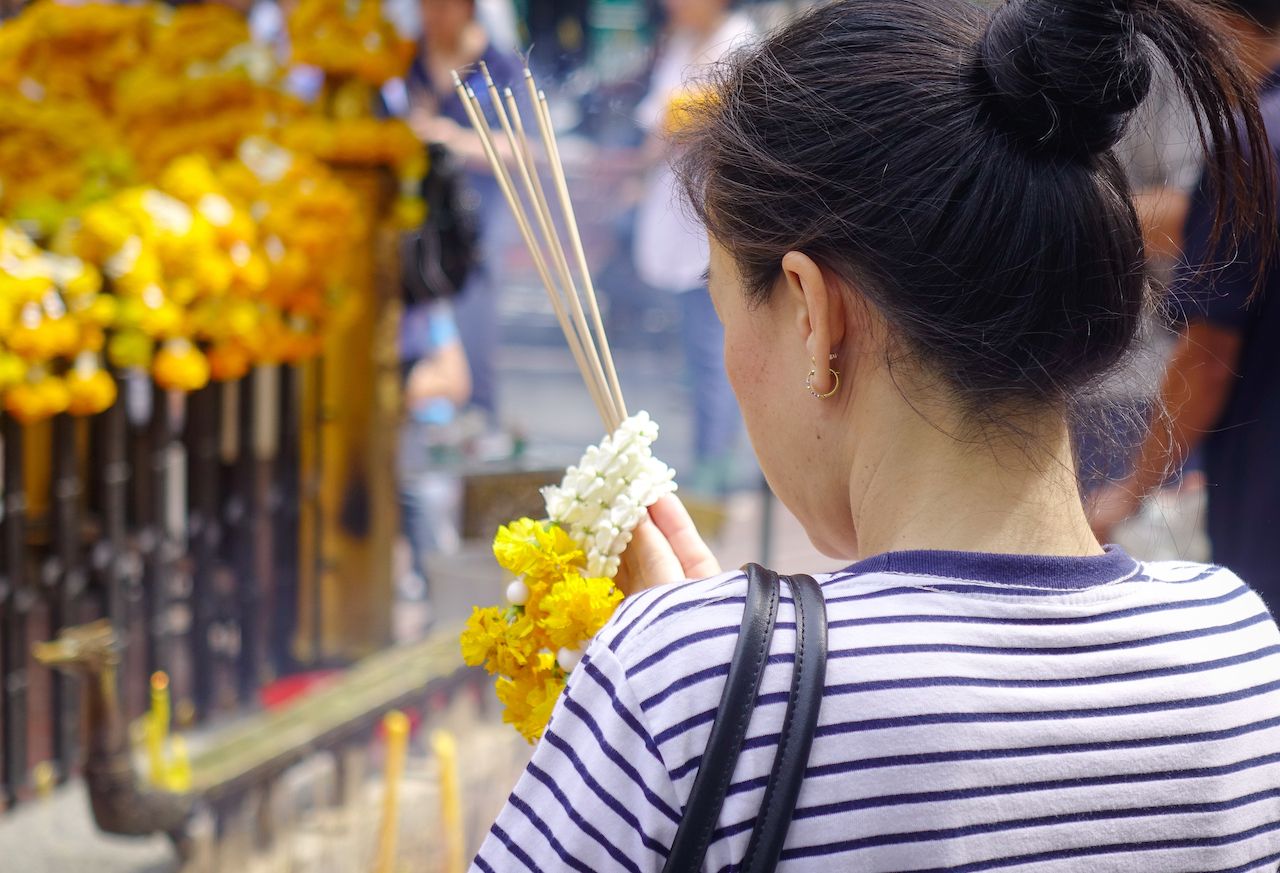 Avoid talking loudly as many may be praying around you. For women, avoid wearing spaghetti straps, cover your thighs, and avoid praying when you are on your period as that is considered disrespectful in Thai culture. Make sure you buy offering items inside the shrine, since prices at the booths by the entrance are three to four times more expensive.

Art + ArchitectureThe 7 Most Amazing Temples in Thailand Outside of Bangkok
Tagged
Religion
What did you think of this story?
Meh
Good
Awesome

Bangkok Could Be Underwater by 2030