There’s good reason why this rugged, beautiful landscape in the far northwest of England is on UNESCO’s World Heritage List, and why it’s inspired poets and artists for hundreds of years. In fact, there are many reasons to visit this place, which can appear starkly dramatic one second and pastorally idyllic the next.

For a start, there are 16 stately lakes, along with countless other placid meres, rushing rivers, and glacial tarns. There are more than 200 hills and mountains, which draw 19 million visitors a year. There are 26 miles of unspoiled coast. And then there are the many pretty towns and villages which dot the valleys. The towns are lovely, and here are five of the best ones in which to base yourself when you visit the Lakes District. 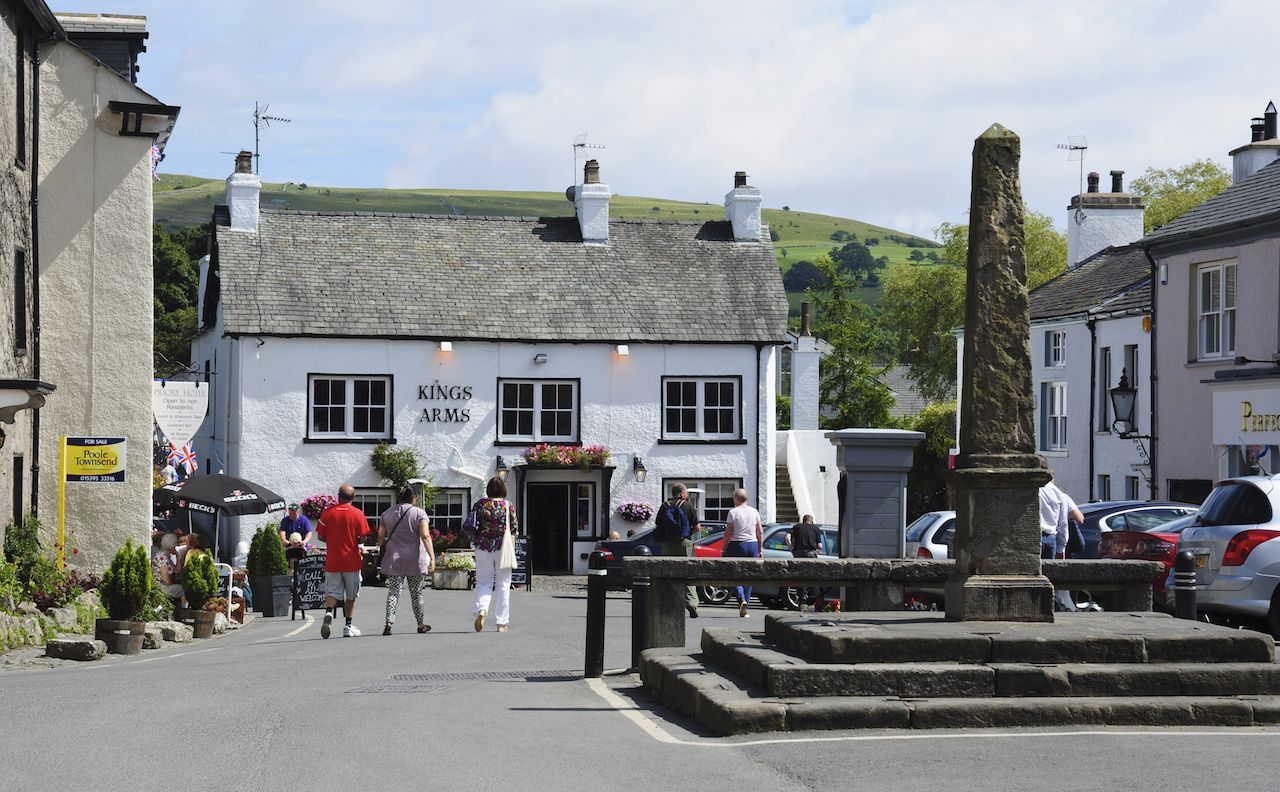 Just outside the Lake District National Park, Cartmel is a medieval village 15 minutes’ drive south of Windermere. It’s on the southern end of the area, just over three hours by train from Manchester. As with many places in the Lakes, Cartmel is filled with traditional lime-washed stone buildings that give the town a relaxed, timeless atmosphere.

That said, the reputation that Cartmel has built as a center for high-end gastronomy is singular. Many people who visit Cartmel do so expressly to visit the iconic, double-Michelin-starred restaurant L’Enclume. If you can’t afford the steep prices, though, there’s still plenty to draw you to this charming place, including a wealth of inns and pubs such as The Cavendish Arms and The Pig & Whistle. You can also stock up on Cartmel’s best-known invention, sticky toffee pudding, at the Cartmel Village Shop.

There are lots of other attractions nearby, including Cartmel Priory, a popular 12th century church unparalleled in the region for its grand, imposing architecture. A short drive to Newby Bridge takes you to the departure point for boat cruises on Windermere, England’s largest lake. If you’d rather see the landscape on foot, then the walk up Hampsfell is a local favorite. It’s only a small hill, but its location makes for sweeping views of Morecambe Bay to the south and the mountains further north. 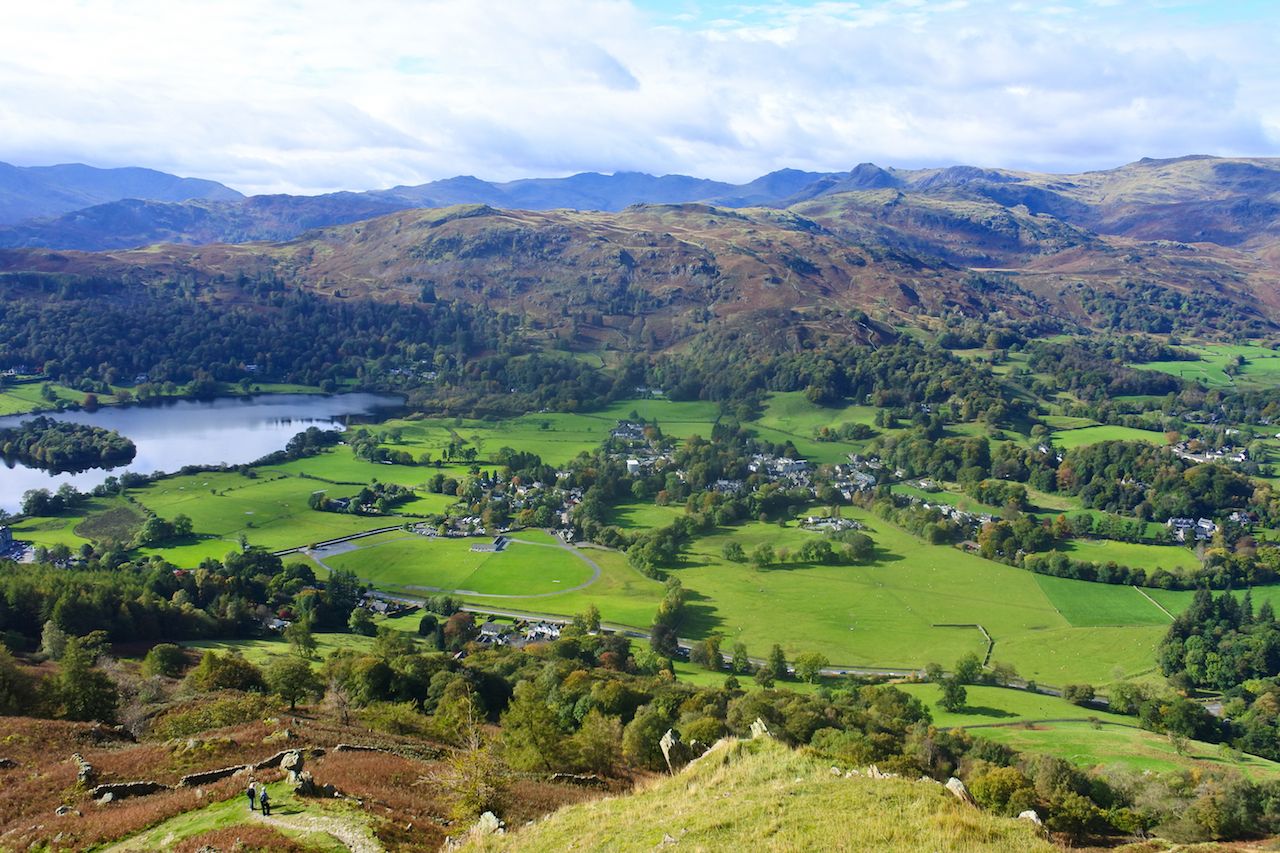 Perhaps you’ve already met the Lake District without even realizing it. If you’ve ever read William Wordsworth’s poem “I Wandered Lonely as a Cloud,” then you already know about the twinkling flowers that light up these parts. What you might not have heard from the poet, however, is his proclamation that the village of Grasmere is “the loveliest spot that man hath ever found.”

Wordsworth lived at Dove Cottage in Grasmere for 14 years, and for around $8 you can also enjoy the house, gardens, and Wordsworth museum. Elsewhere in this pretty village are numerous historic buildings such as St Oswald’s Church, where Wordsworth is buried, and the Scandi-styled Heaton Cooper Studio, a gallery space for local art. Foodwise, there’s Sarah Nelson’s famous gingerbread shop, a specialist bakery that’s been offering chewy Grasmere gingerbread since the 19th century.

Just a short walk from the town is Faeryland café, where you can rent a boat and take off across the waters for a leisurely row. If you’re keen to start exploring the nearby hikes then there are two particularly good ones of varying difficulty. On the shorter end there’s Helm Crag, which is also known locally as the Lion and the Lamb. This is a four-mile, round-trip hike from Grasmere that boasts spectacular views and a set of craggy rock outcroppings that are fun for children to explore too.

For more experienced hikers, Helvellyn is one of the best walks in the area. At over 3,100 feet, it’s the third highest peak in England, and certainly one of the most popular. There are routes up from Grasmere, but if you really want a special experience then drive 40 minutes to the village of Glenridding. From there, you can ascend the summit via the daunting route along Striding Edge, one of the most loved routes in the UK — although it can be treacherous and should be treated with caution. Assuming you’ve got the fitness and fine weather, this scramble along the razor-sharp ridge overlooking the scenery is exhilarating. 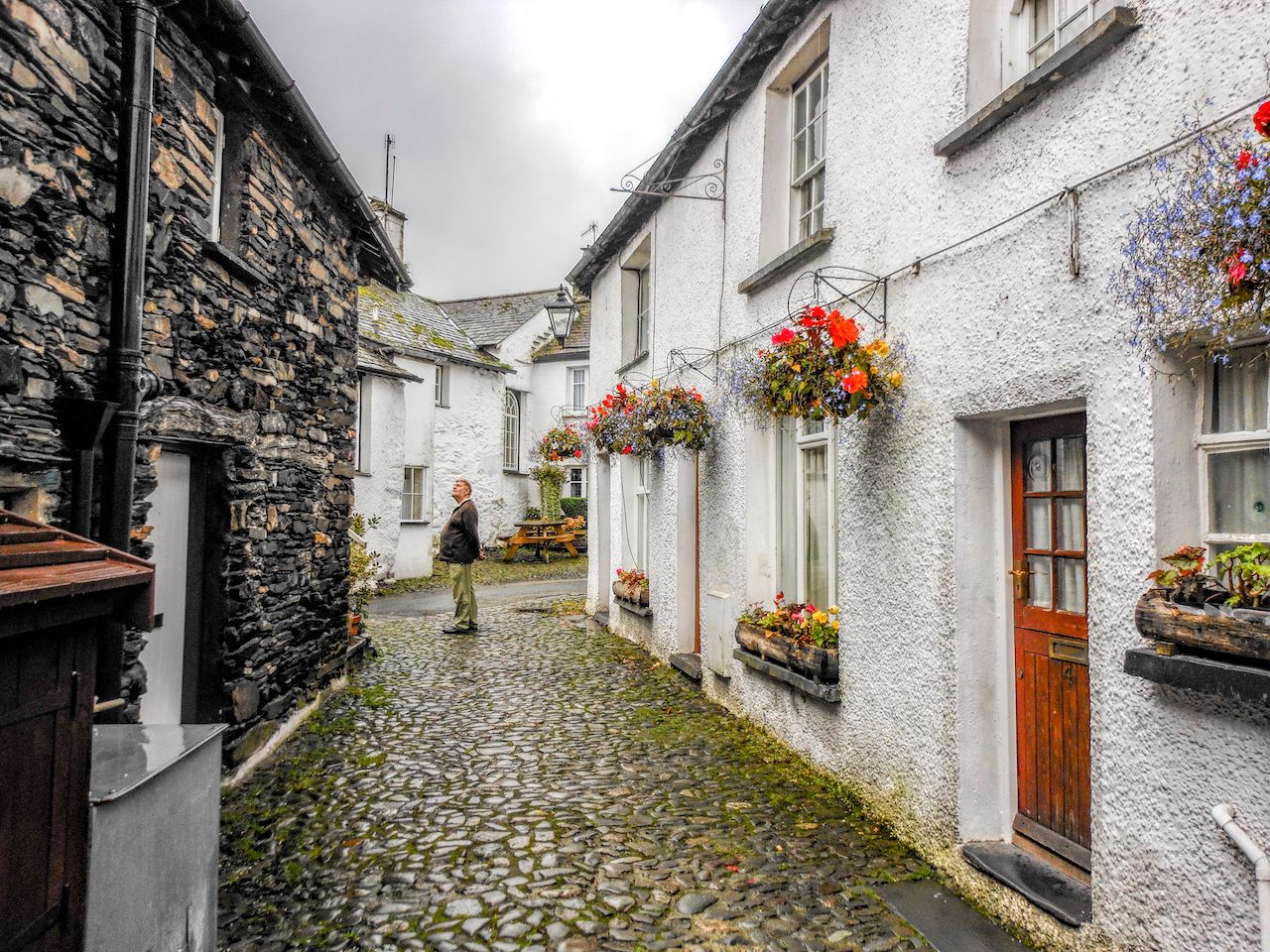 Halfway between Windermere and Coniston, Hawkshead village is a good place from which to explore both lakes and a host of other activities. In contrast to many of the towns and villages in the Lakes, which have become incredibly — overly, some say — popular with day-trippers, Hawkshead retains much of the village charm it’s had since the 16th century.

The center is closed to cars, which makes for a lovely stroll around the quaint pubs and shops. The Sun Inn and the Queens Head are village pubs that offer hearty food in classic English pub settings. Hawkshead is also home to the legacy of another British cultural icon, Beatrix Potter. The wildly popular author and illustrator made her home in the region and a great deal of her original artwork is now displayed at the Beatrix Potter Gallery; admission is $10.

The circular walk around the pine-scented paths of Tarn Hows is one of the most peaceful short walks in the southern end of the Lakes. It’s 10 minutes from Hawkshead by car, or around an hour on foot. For the more active, the Old Man of Coniston is the highest fell in the area and makes for an excellent two-hour walk. Start from Coniston village near Hawkshead and make the ascent up the Old Man through a blasted landscape of slate quarries before reaching the impressive panorama at the 803-meter summit.

Also popular for visitors to Hawkshead is Grizedale Forest, which is around 10 minutes by car. Within this large woodland, the range of activities includes mountain biking courses and the outdoor adventure park Go Ape, where you can clamber about in the high trees and fly around on zip lines like an aerial daredevil. 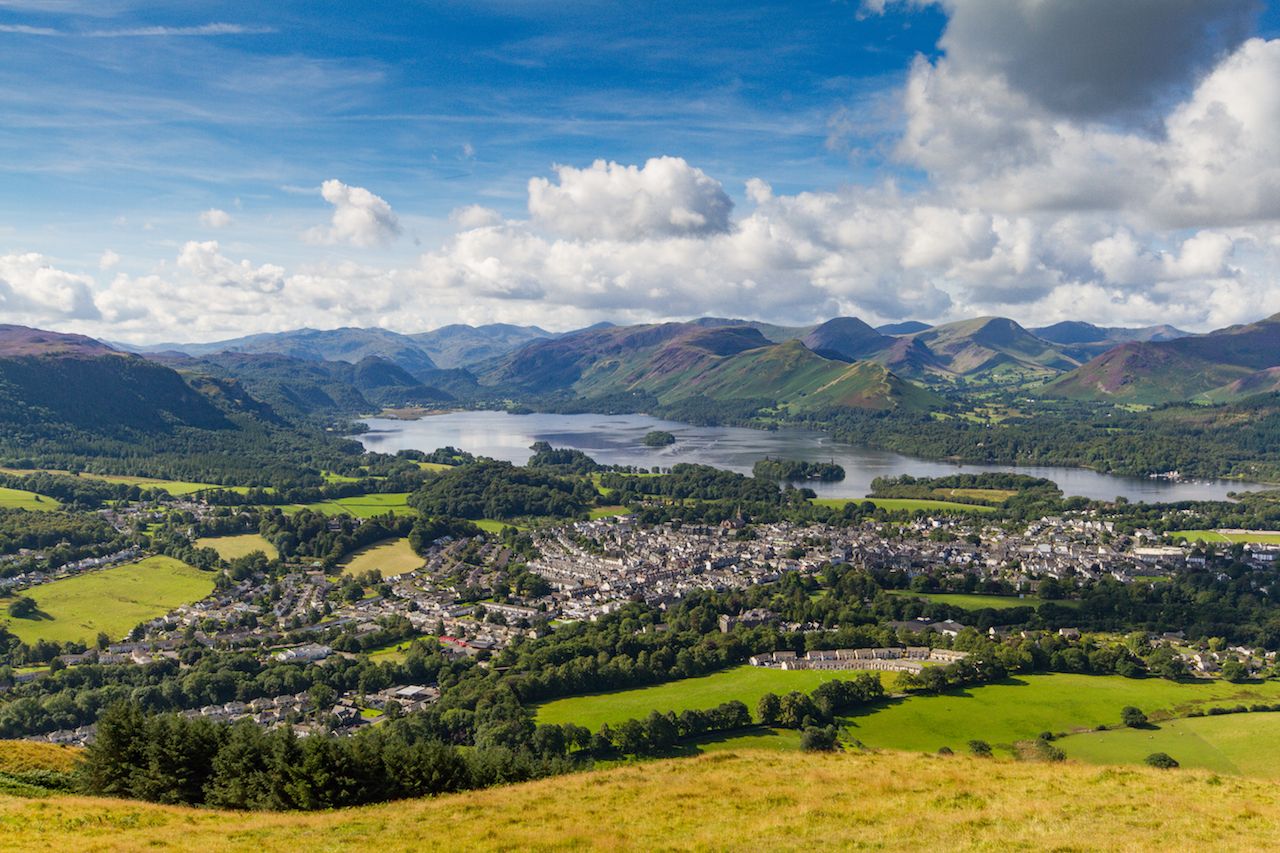 At the northern end of the Lakes is the bustling market town of Keswick. It’s the major center in this part of the world, with plenty of amenities for everyone. The outdoor market on Thursdays and Saturdays is at the heart of town life, while the surrounding streets are also filled with small galleries and independent shops. For sweet treats there’s Ye Olde Friars, which has been offering luxury chocolates and local goods since 1927. A place with real local character is Thornthwaite Galleries, a 200-year-old Cumbrian barn converted into an exhibition space, handicrafts store, and tea room.

The dining options in Keswick are numerous, but tables can be scarce so booking ahead of time is wise during busy periods. Fellpack serves up coffee and hearty, healthy food for walkers during the day, and then turns into a cozy restaurant in the evening. Also popular with walkers in need of sustenance, the traditional Wainwright pub offers good beer and locally sourced food in convivial surroundings.

Nearby Derwentwater is the lake worth seeing, especially for water-sports enthusiasts. At the Derwentwater Marina you can try sailing, windsurfing, and kayaking. One popular and fun activity that can also be arranged at the marina is ghyll scrambling, which involves suiting up in safety gear and waterproof attire and then scrambling through the slides and jumps of nearby mountain streams.

Hikers can tackle the sixth-highest mountain in England, Skiddaw. Although Skiddaw’s relatively straightforward topography means that it’s not the most difficult ascent in the Lakes, what it lacks in scrambles it makes up for in views. As it’s the highest peak in the area, once you do reach the summit the stunning view of the patchwork greens and blues below are clearer than from many of the other fells in the region. 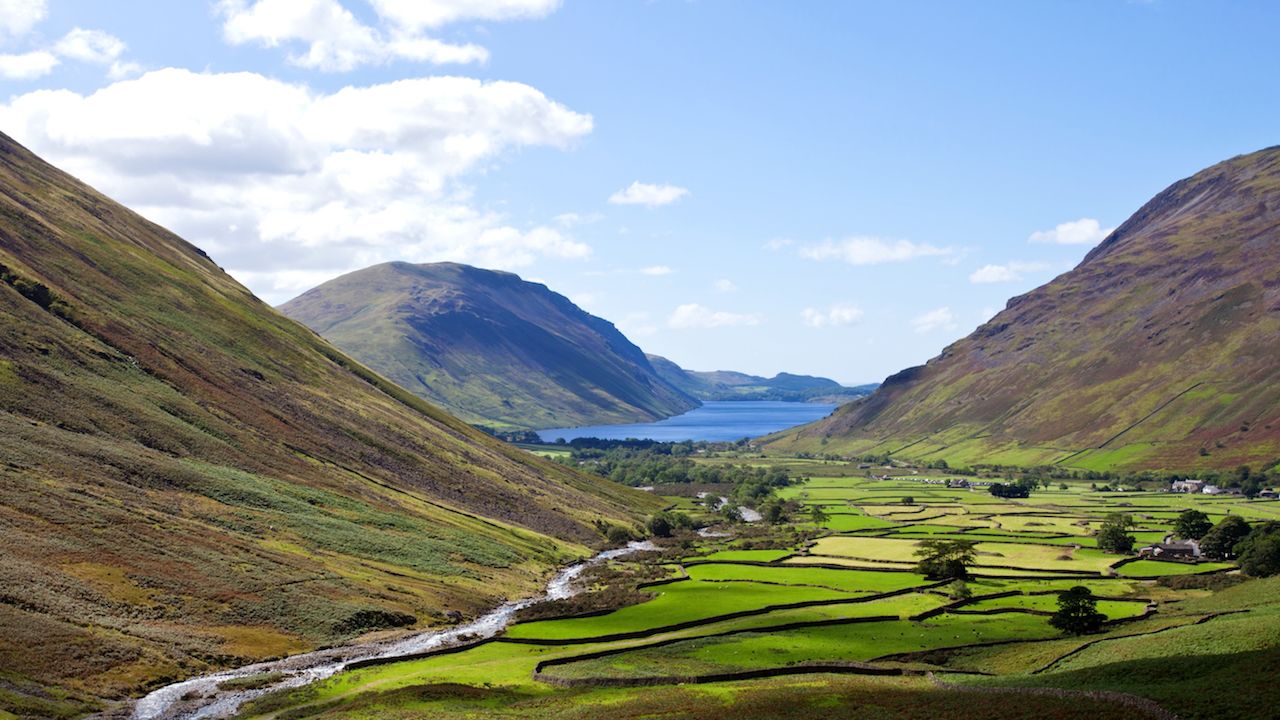 There’s probably only one reason most people come to the Wasdale area, but it’s a good one: Scafell Pike. The tiny hamlets of Nether Wasdale and Wasdale Head sit at the foot of England’s highest mountain and both offer access to the mountain and England’s deepest lake, Wastwater. Amenities are thin up here, and you’ll certainly need a car, but the sense of remoteness that fills the beautiful landscape of the Borrowdale Valley is worth disconnecting with the outside world for a while.

The Strands Inn & Brewery in Nether Wasdale offers well-priced rooms and food in a cozy, homely setting. Even nearer to Scafell Pike is the Wasdale Head Inn, which is a simple but comfortable place where you’ll find a warm welcome and good companionship among people also making the area’s vaunted climbs. If you’re a camper, then the Wasdale Campsite also has campsites, a shop, and other facilities.

The mountain, Scafell Pike can be a strenuous climb, but on a clear day the views of Scotland, Wales, and Ireland that can be glimpsed are ample reward. Scafell Pike is one of the UK’s famous “Three Peaks” — along with Snowdon in Wales and Ben Nevis in Scotland — so it’s popular with walkers. Get there early in the day, though, and there’s a good chance you won’t have to share the scenery with too many others.

Hiking7 Epic Long Walks in the UK You Can Plan Yourself
Tagged
Outdoor Trip Planning England
What did you think of this story?
Meh
Good
Awesome