According to a legend of the Thao people, one of Taiwan’s indigenous peoples still living in the country today, their ancestors followed a white deer to a misty alpine lake in the central mountains while hunting. The lake was full of shrimp and fish, and the Thao people decided to settle there. Today, they still call what is now known as Sun Moon Lake their home.

Located in Taiwan’s Yuchi Township, Nantou County, Sun Moon Lake is the largest lake in Taiwan. The name of the lake comes from how it’s divided by Lalu Island at its center: one side resembles a crescent moon, while the other looks like a sun. Best known today as a stunning recreational area, it’s home to attractions such as Shuishe Great Mountain, Shuanglong Waterfall, Mingtan Reservoir, and Shuili River. Perhaps one of its most treasured attractions is the Shuishang Bikeway, a 1,300-foot-long path situated directly on the water that allows visitors to experience the splendor of the lake up close.

From late January to mid-March, Sun Moon Lake hosts the largest cherry blossom festival in Taiwan, showcasing over 5,000 cherry blossom trees. In April through May, the air around the lake is filled with glittering fireflies, and later in the year, visitors can join activities like a swimming carnival, fireworks, and bike races. Shuttles and tour buses are available to help tourists get around the lake. 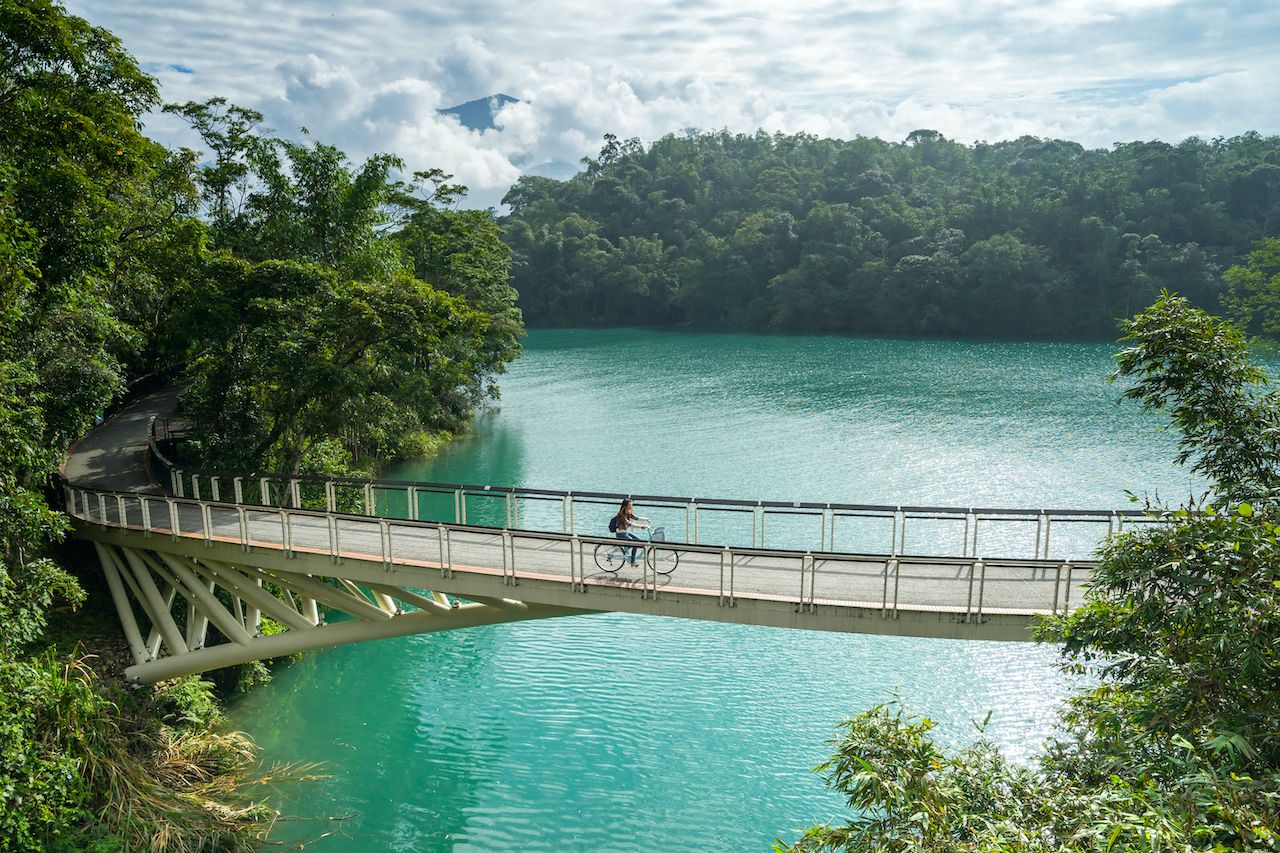 One of the easiest ways to get around the lake is by a ferry, which drops visitors off at popular destinations like Shuishe, Xuanguang Temple, and Ita Thao (also known as Barawbaw in the Thao language). Barawbaw, according to the Taiwan Tourism Bureau, “is the last residence of the Thao people,” and it’s also where most food stalls and restaurants can be found. You’ll likely also spot souvenir shops selling owl figurines in many shapes; the owl is a guardian deity considered lucky in Taiwan.

All around Sun Moon Lake, you’ll find pit stops to rest your feet and feed your appetite — which will no doubt surge after a long day of adventuring outside. The area has noodle restaurants, coffee and ice cream shops, traditional food markets, and tea houses. Visitors are spoiled for choice when it comes to the meals over at the lake, and you’ll surely want to try every morsel you spot. When it comes to planning your itinerary for the day, here are six Taiwanese foods you should be sure to sample at Sun Moon Lake. 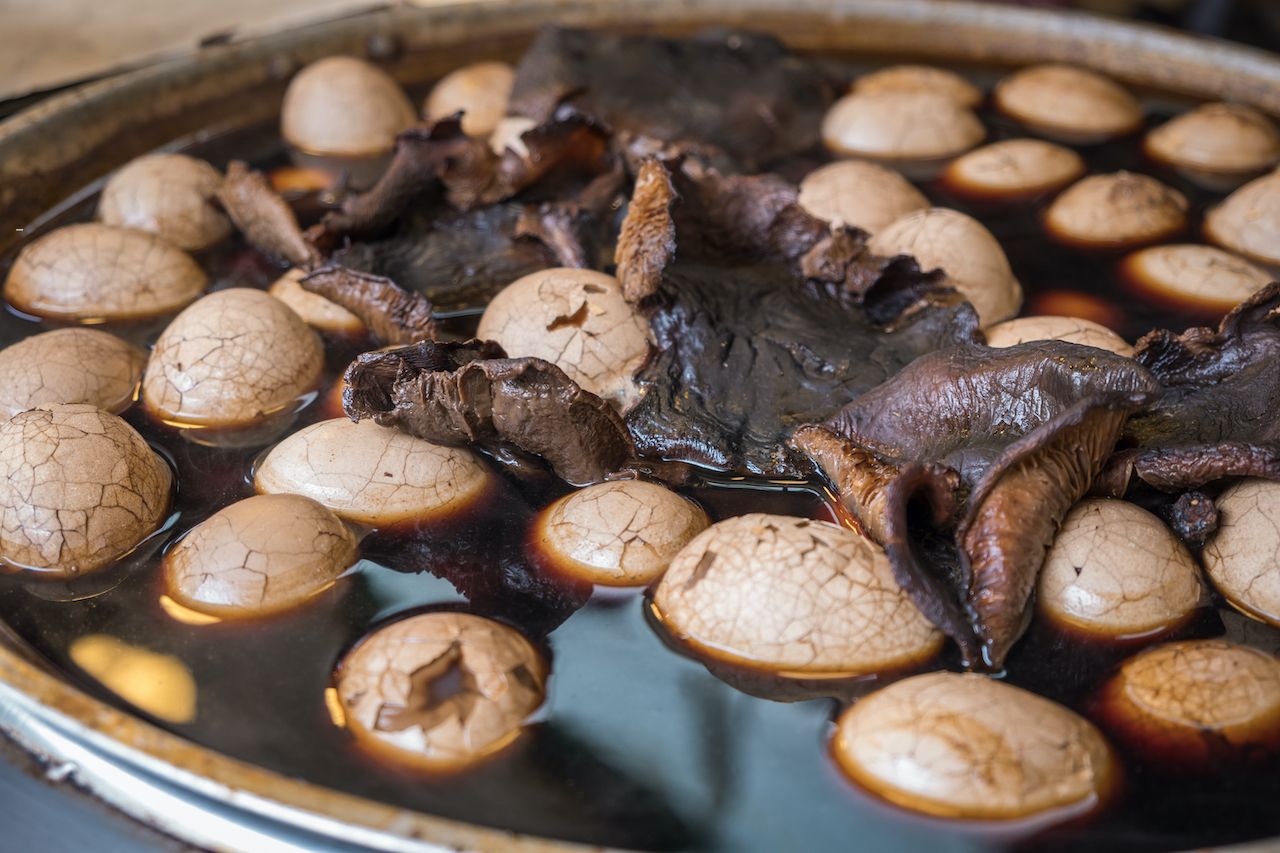 Black tea eggs can be found near Xuanguang Temple, which is one stop along the ferry route. These eggs are boiled twice. Right before the second boil, they’re cracked and then dropped in a mixture of local specialties like tea, shiitake mushroom, and spices. This process results in a marbled look to the egg. According to WelcomeTW.com, the Grandma (or Ah Ma) who runs the tea egg stand at Sun Moon Lake, has been making these tea eggs since 1949. The eggs take more than six hours to make, and about 6,000 are sold daily at Sun Moon Lake. 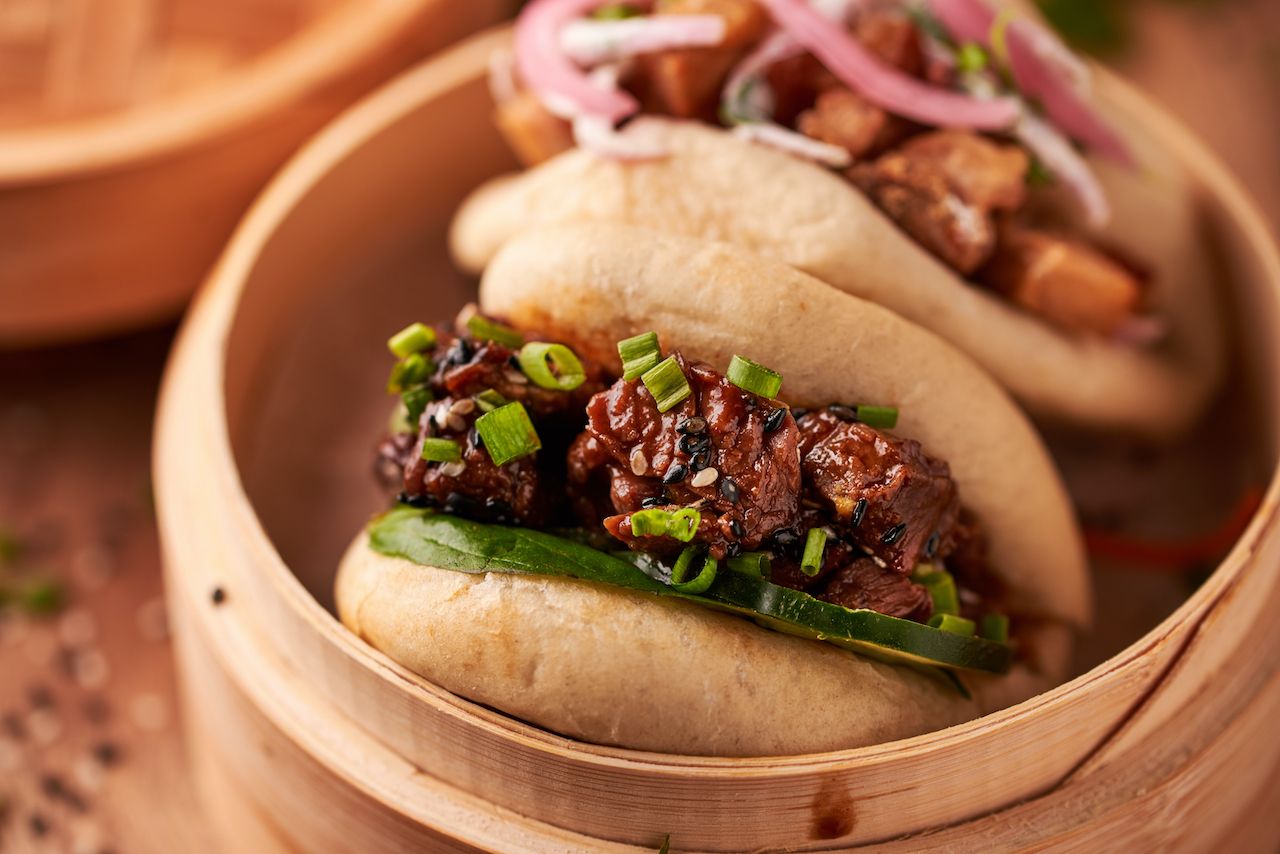 Wild mountain boar is another popular dish around Sun Moon Lake. It often appears smoked, in sausage and stir fries, and in gua bao. Gua bao is similar to an open-face pork bun. It’s made with a steamed sweet bread sometimes known as a lotus bun that’s stuffed with meat and vegetables. At Sun Moon Lake, one signature gua bao variety is made with pumpkin, giving the lotus bun an orange hue.

One of the beverages you’re likely to encounter over and over at Sun Moon Lake is black tea. Black tea became popular in Taiwan during the Japanese occupation of the island from 1895 to 1945. Due to the climate and elevation around Sun Moon lake, a version of Assam tea leaves thrive, and the black tea grown here helps put Taiwan on the list of the major tea regions in Asia to know. The signature honey and wintergreen flavors have helped it retain a loyal fanbase.

The most popular of these black teas are often referred to as red or ruby teas and are often labeled numerically. Look out for Hong Yu or #18 and Hong Yun or #21 at tea shops. You can try them as black tea, milk tea, or in soft-serve ice cream either on its own or swirled with chocolate. Tickets to the ferry sometimes include coupons for black tea egg rolls which are like rolled wafer cookies. 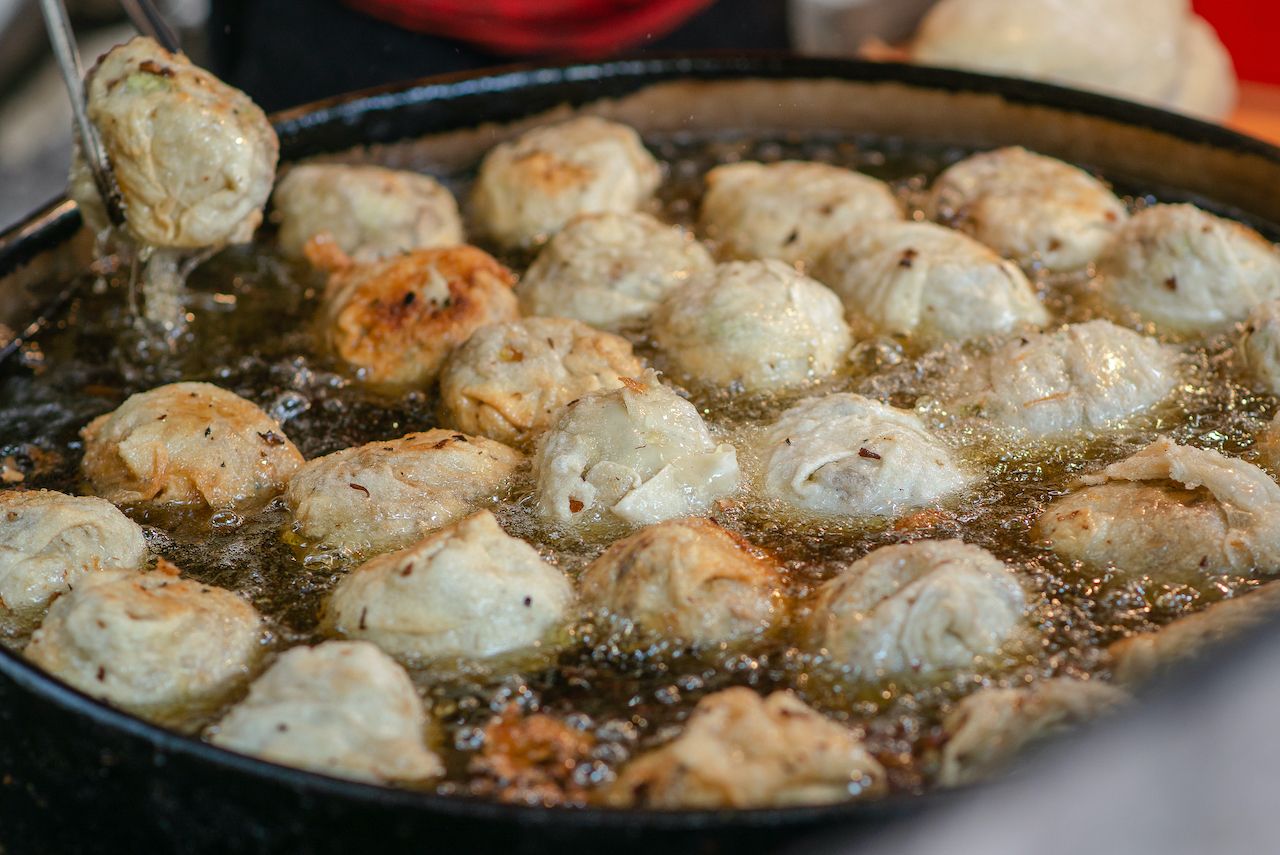 For vegetarian options that are satisfying and filling, try cabbage buns — a deep-fried, baseball-sized treat. These buns are stuffed with a mixture of cabbage, local mushrooms, and glass noodles wrapped in a dumpling skin and deep fried. For the buns that contain mushrooms, look for xiānggū bāo, while those without mushrooms will appear as gāolí cài bāo on the menu. A sweet chili sauce is usually available for dipping. 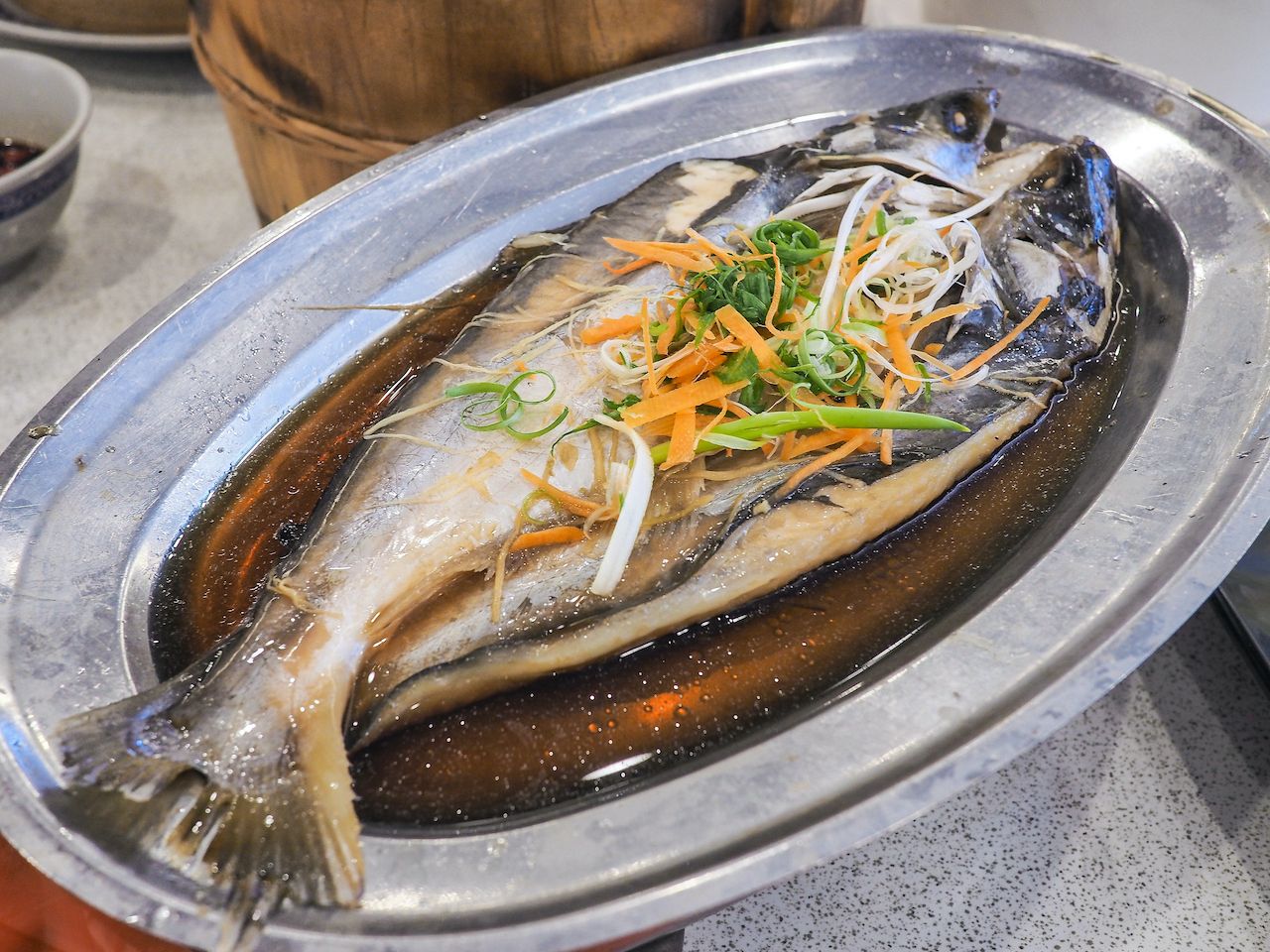 Also known as aruzay or president fish because it was a favorite of China’s former president, President Chiang Kai-shek, grass carp is one type of freshwater fish found in Sun Moon Lake. More importantly, it’s a staple food in the indigenous Thao cuisine. The president fish is served fried or steamed whole with green onions, ginger, and coriander.

Mochi, like black tea, is another holdover from the era of Japanese occupation of Taiwan. It’s still popular today and is made with sweet glutinous rice flour. The Taiwanese people have adapted mochi to suit their own tastes with a type of the dessert called baiman. Baiman is also considered a speciality of the Thao people, and it’s usually only eaten during religious ceremonies like the traditional new year ancestor worship ceremony. There are other flavors of mochi available around Ita Thao Village.