With flora, fauna, and landscapes to rival the world’s most famous rainforests, the Riberia Valley in Brazil’s Atlantic Forest is an emerging destination that rewards travelers up for a real adventure.

While the Atlantic Forests’ neighbor to the west — i.e. the Amazon — tends to get the most attention, the Atlantic Forest is well-worth a dedicated trip. It’s in the southeast part of Brazil, covering coastal areas around the towns of São Paulo, Curitiba, and Criciúma. The Brazil Atlantic Forest (or Mata Atlântica, as it’s known in Portuguese) is the second-largest rainforest in Central and South America after the Amazon. It covers 34,750 square miles along a 1,158 miles stretch of coast through 17 different Brazilian states. 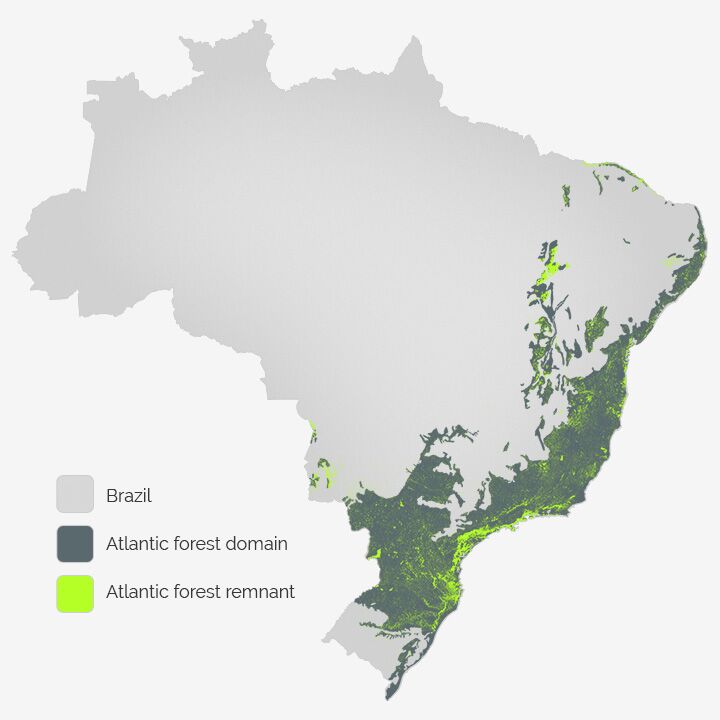 Unfortunately, only about 10 percent of the original forest remains today. Owing to early colonization by Europeans and roughly 500 years of settlements and development, the landscape looks quite different from how it would have in the 14th and 15th centuries. But thanks to sustainable tourism operators and local and national conservation efforts, the remaining portions of the Atlantic Forest are healthy and welcoming to travelers keen on environmentally sustainable tourism who want their tourism money to support conservation efforts.

In the state of São Paulo, eight state parks (entrance fees R$32.00, or $5.78 USD for foreigners) and numerous private biological reserves connect a network of sustainable travel opportunities and adventures for visitors interested in conservation, community-based tourism, and native culture. If you’re dreaming of visiting Brazil’s Atlantic Forest, read on to check out the most sustainable ways to explore the forest’s best sights. The wet, wild, and immersive adventures are generally grouped into three sections of the forest: the caves of Caverna do Diablo State Park, trails around PETAR, and the coastal area around Lagamar de Cananéia State Park.

The state parks that protect the Atlantic Forest were established primarily to protect the environment, not for visitor enjoyment — and that’s exactly the case with Caverna do Diabo (Devil’s Cave) State Park. Though it’s home to an extensive network of more than 400 caves, only a few are accessible to protect the fragile environments from foot traffic. The open caves are designed to be an educational tool to build appreciation for the need to protect the area. Some of the best cave guides are not only native Quilombolas people (and excellent bird watchers!) but also indigenous locals. And visiting the cave system with local guides means you’re supporting a non-extractive economy, supporting guide education, and directly supporting conservation efforts. 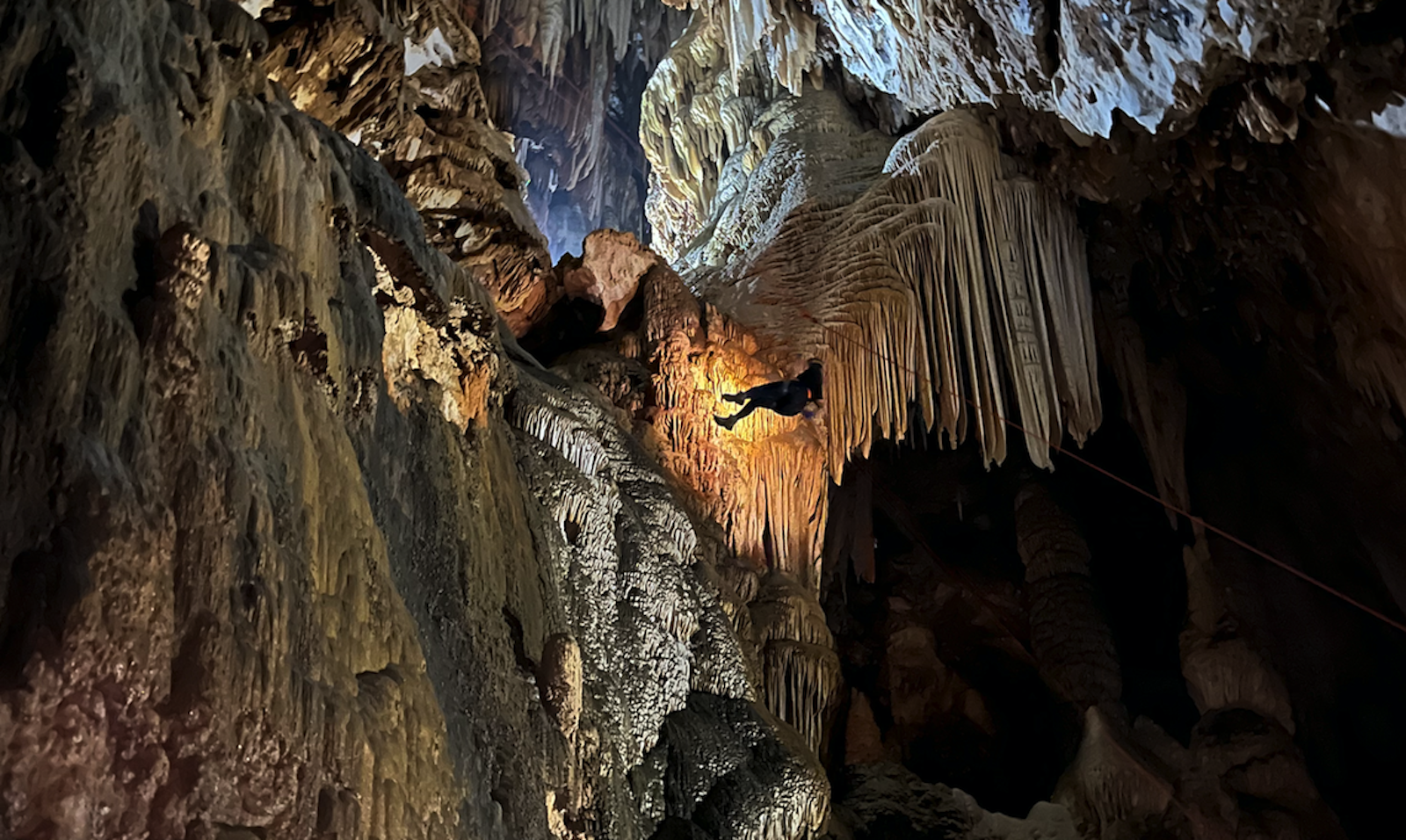 Having visited countless cave systems on four continents myself, I’ve come to know a thing or two about stalactites, stalagmites, and the joys of subterranean adventure. And unlike many of the cave systems I’ve seen in Central America or Southeast Asia, the caves of Caverna do Diabo are in immaculate condition.

I spent the most time in the main Caverna do Diabo cave. This dramatic system has cathedral-sized amphitheaters sprinkled with stalactites and stalagmites soaring nearly five stories high, and they’re in pristine, undisturbed condition. While exploring with my guide Francielle “Fran” Dos Santos Satiro of Caverna do Diabo Aventura (who happens to be the first female guide in the cave system), I learned she meant it when she said “you’re going to get wet.”

The real adventure began after walking through the accessible and well-lit part of the cave. With only a headlamp to illuminate the path beyond that point, we descended into the depths of the cave via a 131-foot long, Indiana Jones-like rappel past towering formations. In this part of the cave, there’s a constant sound of rushing water. Normally, it’s generally recommended to stay away from rushing water — but in this case, moving water means the cave goes even deeper, and I had an expert guide. By gripping a hanging rope and wading through waist- and shoulder-deep water, we arrived at a 16-foot waterfall, fully drenching the few dry body parts we had left. Fortunately, there’s a sauna at the nearby Pousada das Cavernas Lodge to warm up when the adventure is done. 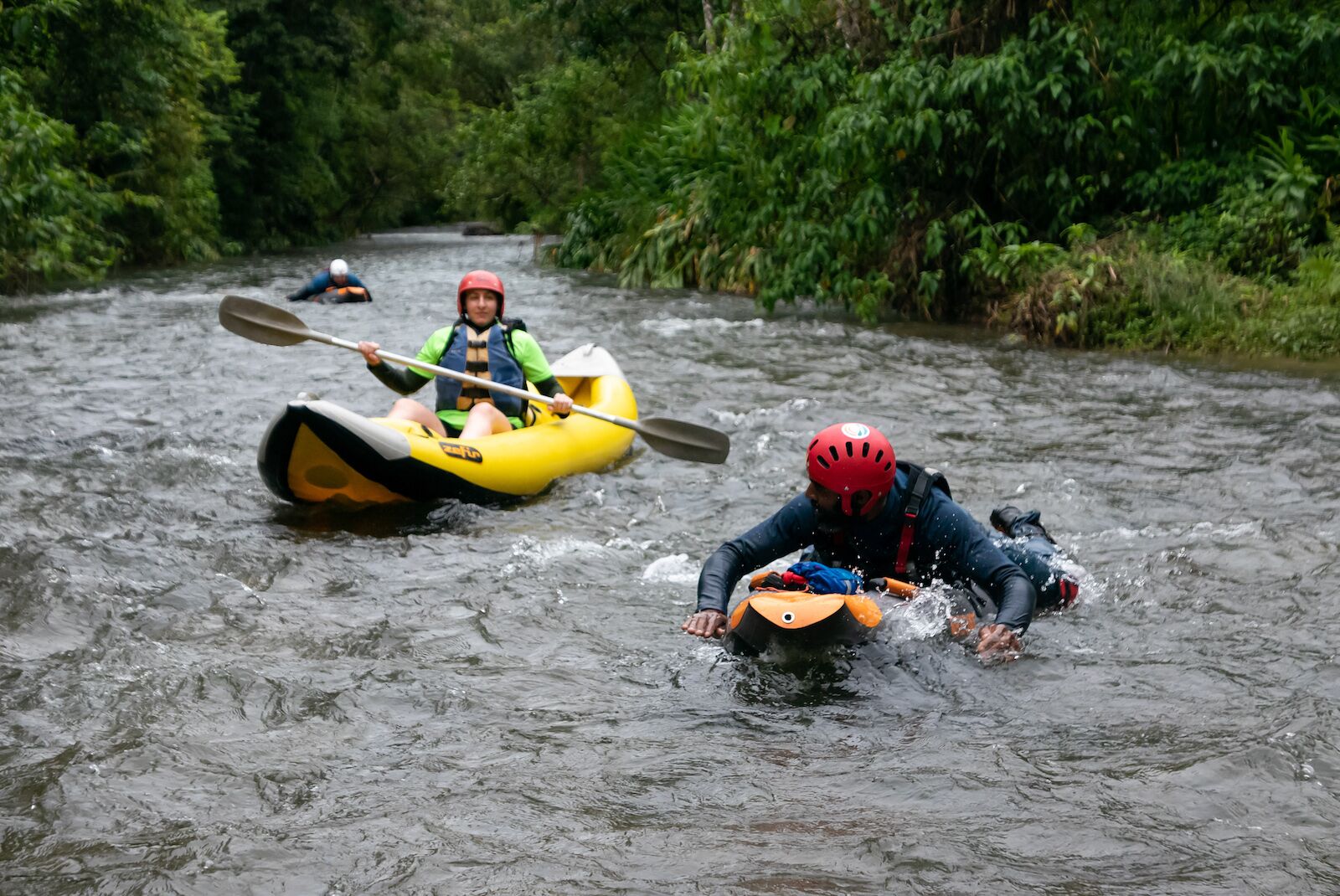 In the PETAR (Parque Estadual Turíistico Alta Ribeira) region near Caverna do Diabo, extensive trail networks, river adventures, and more caves attract travelers keen on exploring the area and taking in some of the forest’s most beautiful landscapes. Trails wind through valleys and past rivers, leading to huge waterfalls. The rivers themselves have carved their own routes through the forest over time, and they’re best enjoyed via a raft or ‘duck’ — an inflatable, kayak-type raft.

My guide for these trails was Angela Carla Aguiar de Matos of Parque Aventuras. Aguiar de Matos followed in the footsteps of her grandfather who discovered some of the cave systems in PETAR. While hiking in the rainforest with Coutu Waterfall waiting at the end, I was humbled to learn that I was among the first people she’d ever spoken English with; like many in tourism, Aguiar de Matos was unemployed during the start of the pandemic. She used her downtime to learn English to eventually welcome back American tourists. The PETAR hiking trails Aguiar de Matos guided me along ford rivers through dense jungle, go through caves and past waterfalls, and can take as long as three days to finish. Not surprisingly, most tourists opt for the full- or half-day hikes. 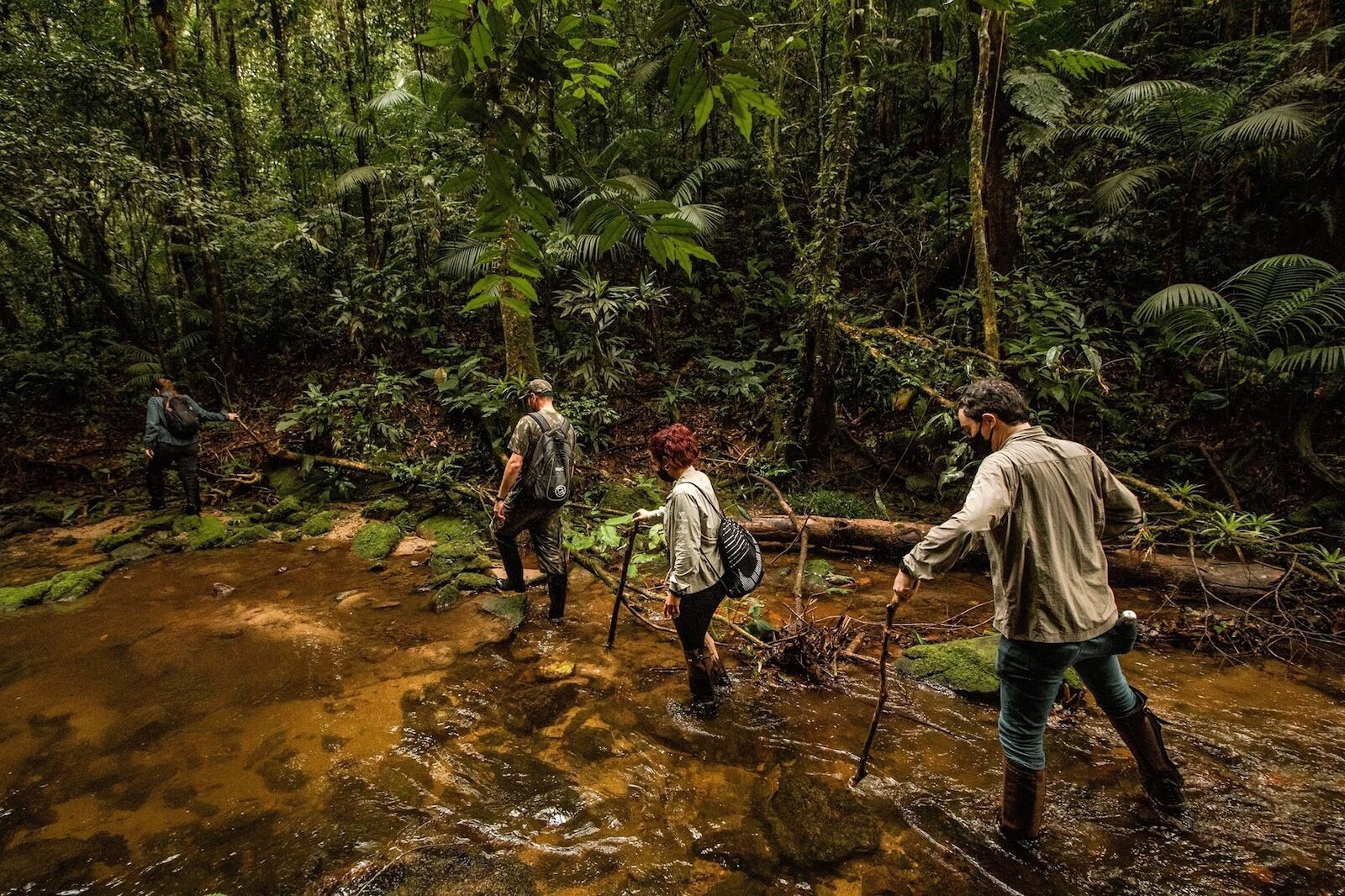 In addition to state parks, Brazil granted environmental protection status to many native communities that have traditional knowledge of the environment and how to sustainably cultivate it. Ensuring the communities are sustainable ensures the land stays under their protection. And in the traditional communities of the Quilombolas — people descended from escaped slaves and the group to which Aguiar de Matos belongs — residents care for the land through the use of traditional agricultural methods. This form of community-based tourism helps visitors understand the many different cultures in Brazil through immersive activities.

In the Quilombolas community, visitors learn about Quilombolas history, go hunting and fishing, hike, and take cooking workshops, all of which all support the well-being and economy of this small community. And by extension, it supports their eco-friendly stewardship of the land. Due to accessibility and language barriers, it’s best to visit through one of the local tour operators like Parque Adventures or Planeta Thrilha. 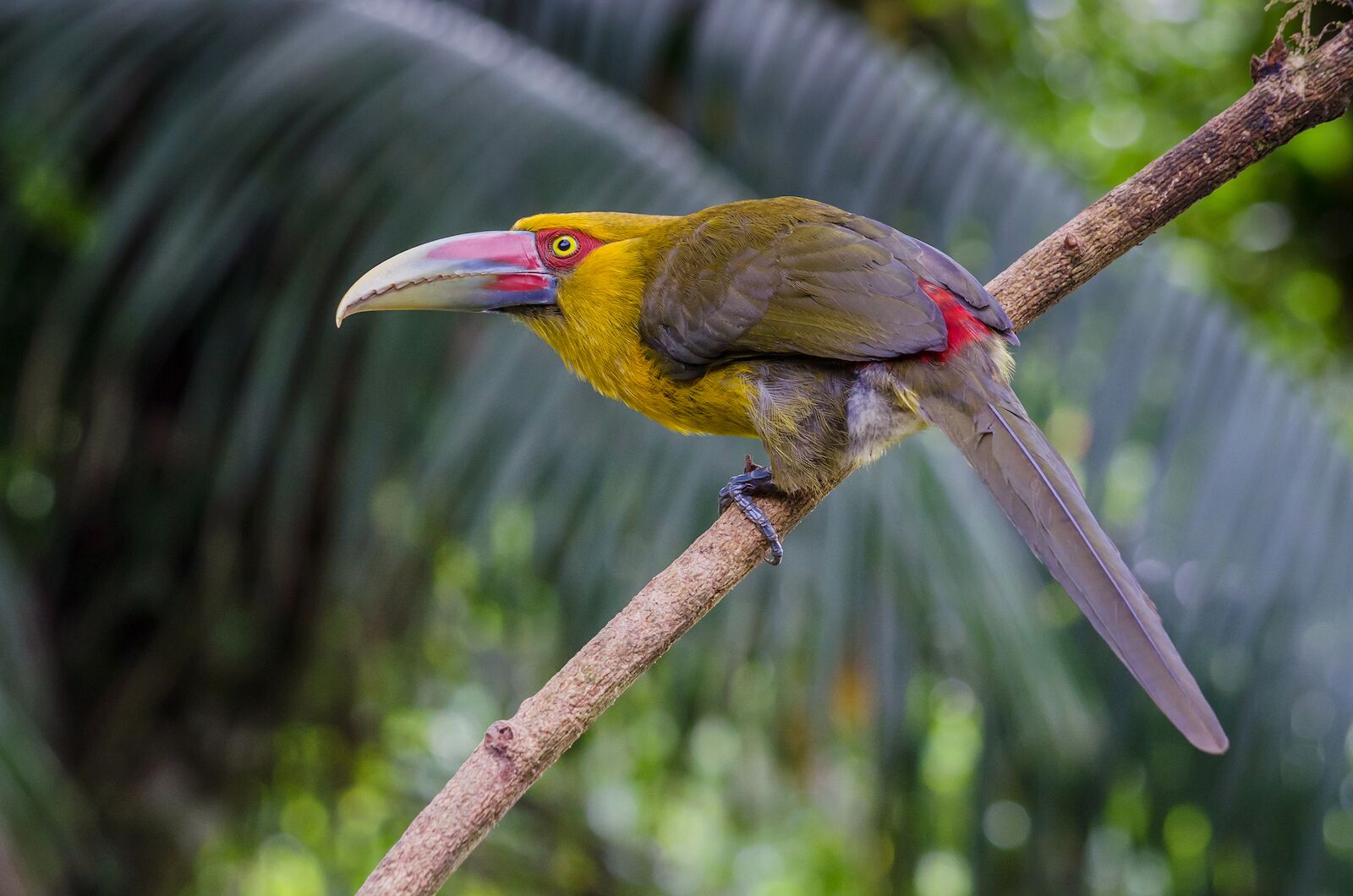 At Legado das Àguas, a private, 120-square-mile nature reserve, a multi-pronged business approach blends conservation, reforestation, and sustainable tourism. Legado das Àguas has a sizable nursery program that plants native species where they’re most needed in Brazil’s Atlantic Forest. In 2020, they planted more than 17,000 endangered juçara palms. It’s the largest private reserve in the Atlantic Forest and is a popular place for lake kayaking, mountain biking, bird watching, and hiking through a network of boardwalks and trails in the dense forest.

Visitors can spend their time learning about the reforestation efforts, looking for flora and fauna, going bird-watching with a guide, and take one of several site tours explaining the organization’s conservation efforts. However, it’s remote, so you likely need to contact the lodge directly or travel via one of their sustainable tourism partners (recommendations below).

The section of Brazil’s Atlantic Forest along the coast includes well-known destinations like the popular vacation island of Florianopolis and others more off-the-radar, like São Paulo’s Lagamar de Cananéia State Park.

Lagamar de Cananéia is a stunner of a state park and one where I counted more dolphins jumping leaping from the water than I did tourists. It’s the core zone of the UNESCO Atlantic Forest Biosphere Reserve and is one of the largest breeding grounds for South Atlantic marine species. It teems with wildlife, and dolphin sightings are almost guaranteed. Along the shorelines, mangrove trees store 10 times more carbon per acre than terrestrial forests, making them vitally important in the fight against climate change. 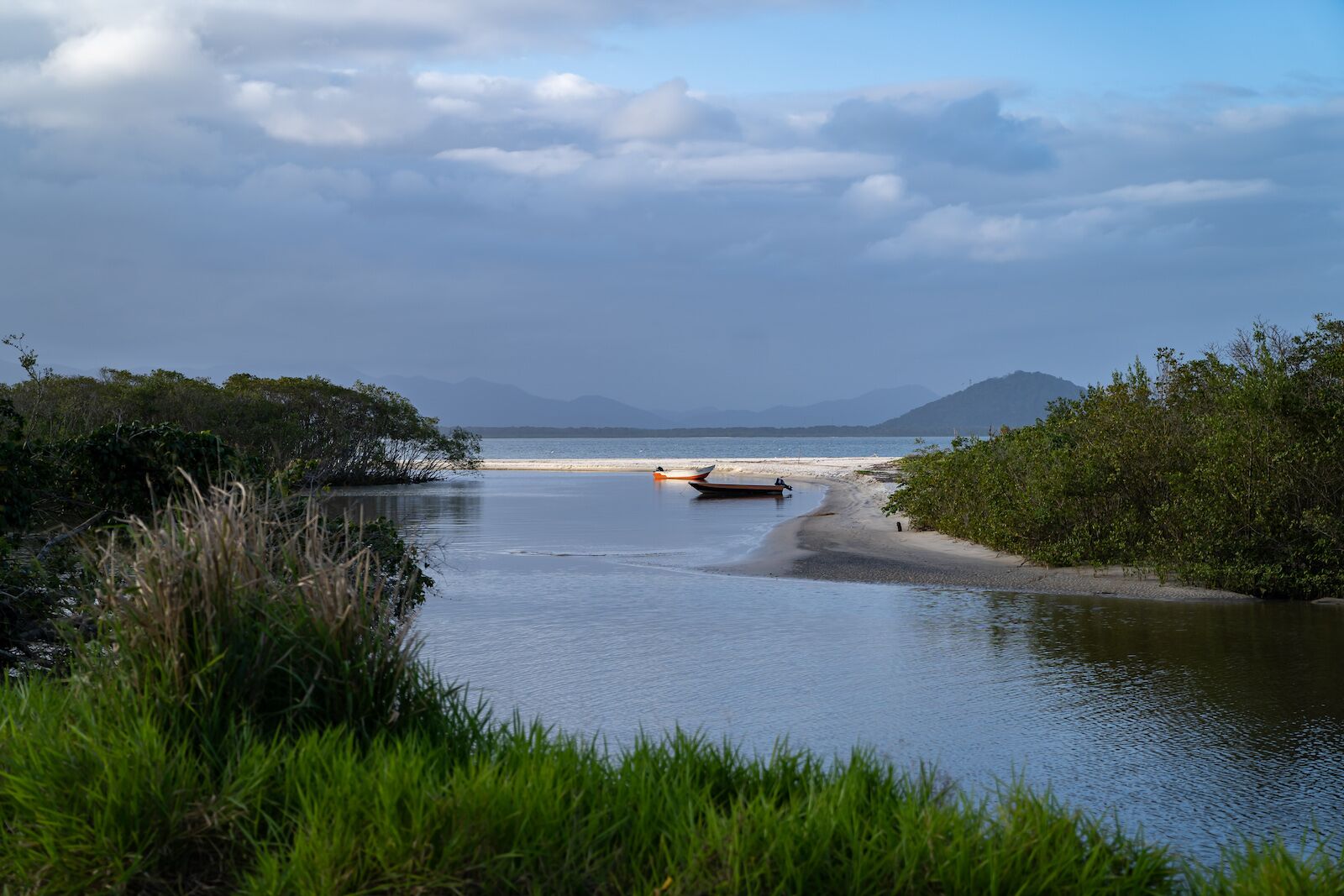 In Lagamar de Cananéia, visitors can learn about these important trees without harming the ecosystem by taking a walk along a raised boardwalk. The stunning beaches, picture-perfect palm trees, and unscarred rainforested mountains make it a must-visit destination.

This coastline is also home to three native communities of the Caiçara people, one of which welcomes visitors to learn about and experience their culture through responsible and culturally immersive tours. In the Takuari-ty village, just north of the state park and near the city of Cananéia, visitors can learn traditional song and dance in the main oca (a traditional home), try native foods, or learn to make (and buy) handicrafts from the women and children of the village.

If you’re planning to visit, do so with Matimpererê Experiences. It’s a local ecotourism operator that offers trips to see and hear dolphins and tours to respectfully observe and participate in activities with the native community. It has more than 25 years of experience working in the area, and its work helps native communities be less dependent on outside resources while maintaining traditional living in protected lands.

Getting around São Paulo’s Atlantic Forest

Public transportation is widely available throughout São Paulo state, but you’ll find it’s general easier to reach the Atlantic Forest with a tour operator. Maioba is based in São Paulo city and has many years of experience guiding trips throughout Brazil. Ekoways is a zero-waste, female-owned-and-led regenerative travel tour operator that follows the United Nations sustainable development goals in its work, and Matimpererê Experiences offers additional guided outdoor adventures and tours.

Conservation and stewardship of Brazil’s Atlantic Forest is a team effort between traditional communities, private enterprises, and governments to establish and protect state parks. But some area accommodations play an equally important role in land stewardship and conveying to guests the importance of conservation.

If you’ve ever heard the term regenerative travel, then you’ll know what to expect from the reforestation program at Pousada das Cavernas (Inn of the Cave). It’s a great example of regenerative tourism: using tourism to leave a place better than you found it. Upon arrival, each guest is welcomed to their room with an endangered baby juçara palm. After planting it, guests can track its growth via a QR code. Juçara palms (Euterpe edulis) are crucial to healthy ecosystems as they provide fruit for many animals throughout the year. They are now protected throughout Brazil and being replanted in droves through programs like this. The hotel is near PETAR and offers a sauna, an oasis-like swimming pool, and massages.

If you’d prefer to be more connected to the land, book a room or tent at Legado das Águas, which also runs a voluntourism operation. Meals are included, and you don’t have to participate in the voluntourism efforts to stay there. If you’re staying on the coast, the oceanfront Hotel Marazul in Cananéia makes for an excellent basecamp for easily reaching coastal adventures and native communities.

Spirits + CocktailsThis Rainforest-Protecting Brazilian Distillery Is a Model for Sustainability
Tagged
Outdoor National Parks Sustainability Brazil
What did you think of this story?
Meh
Good
Awesome