If you made a list of your top 50 excursions for your next trip to Sweden, a visit to a junkyard probably wouldn’t be on it. Unless you’re a car enthusiast who can spend hours happily peering under the hoods of various rusty, out-of-use cars, the prospect of dedicating a day to visiting an old auto-parts shop isn’t very appealing. Unless, of course, that abandoned junkyard is the Båstnäs Car Cemetery. Located deep in the forest of Värmland, on the Swedish border with Norway, the Båstnäs Car Cemetery looks like an old horror film set the production crew forgot to disassemble. 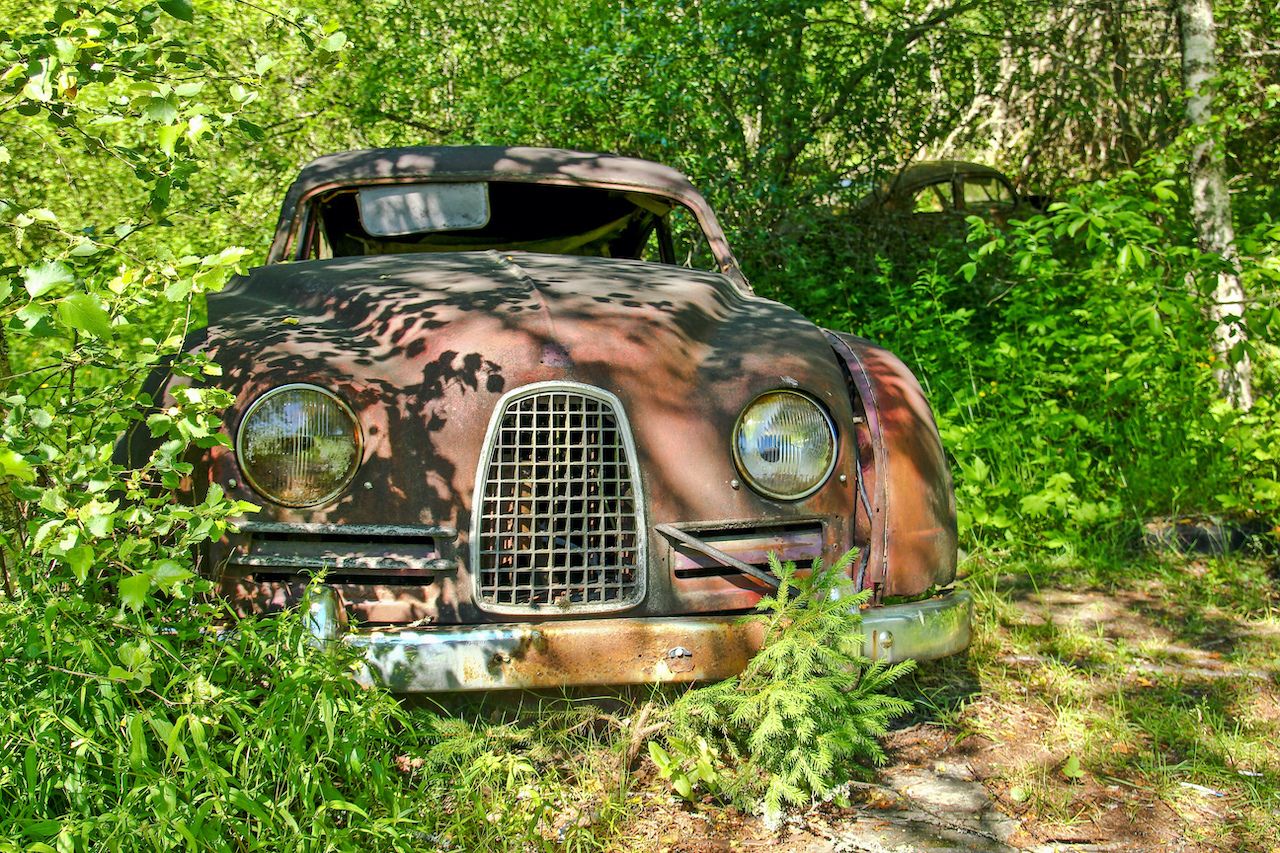 The junkyard was initially started by two reclusive brothers in the 1950s, who collected old, abandoned cars. They ran the business from a house built in a field, in the middle of the forest. The broken automobiles sat in the field in front of the house — a front lawn looking like the manifestation of Stephen King’s imagination.

The brothers kept on collecting Saabs, Volvos, Fords, Sunbeams, Buicks, Volkswagens, Opels, Fiats, and cars of various other makes from the ‘40s, ‘50s, and ‘60s for decades. 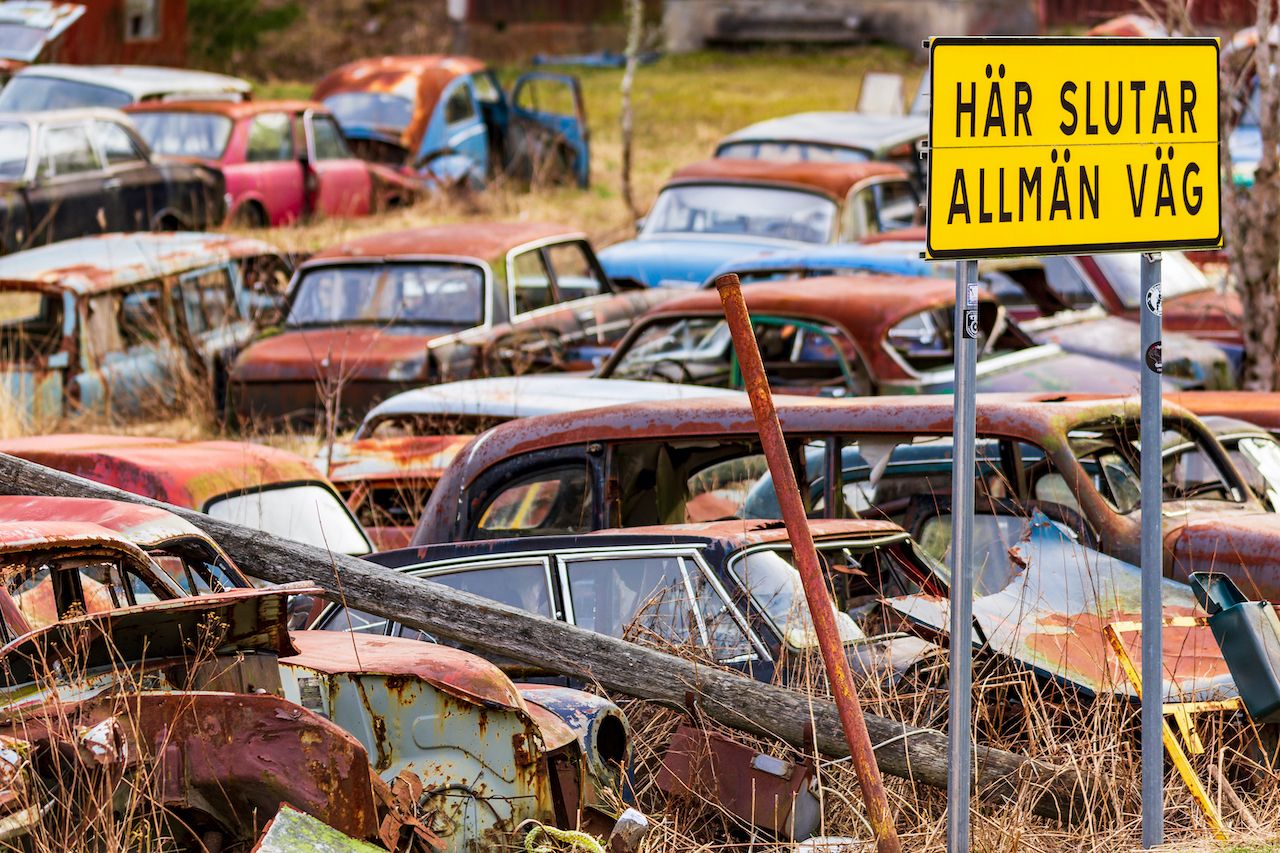 Unfortunately, the dense forest proved difficult to tame. The trees and foliage slowly overtook the cars, and after 40 years the brothers were forced to accept the junkyard’s inevitable fate. One brother left the area in the early ‘90s, while the other remained, trying to sell cars either for parts or for their vintage value.

Visiting the cemetery now is like stepping through the wardrobe into Narnia, but instead of a friendly fawn, you’ll find a scrap yard filled with hundreds of abandoned vintage cars. There’s moss growing on the hoods and tree branches reaching through the windows. Rather than encroaching on nature, the cars look like they’re slowly becoming one with the green forest. It might not fit your expectation of the Swedish countryside — with cottages sitting on tranquil lakes — but it’s certainly one of the country’s most unique attractions, and one worth taking a day to visit. 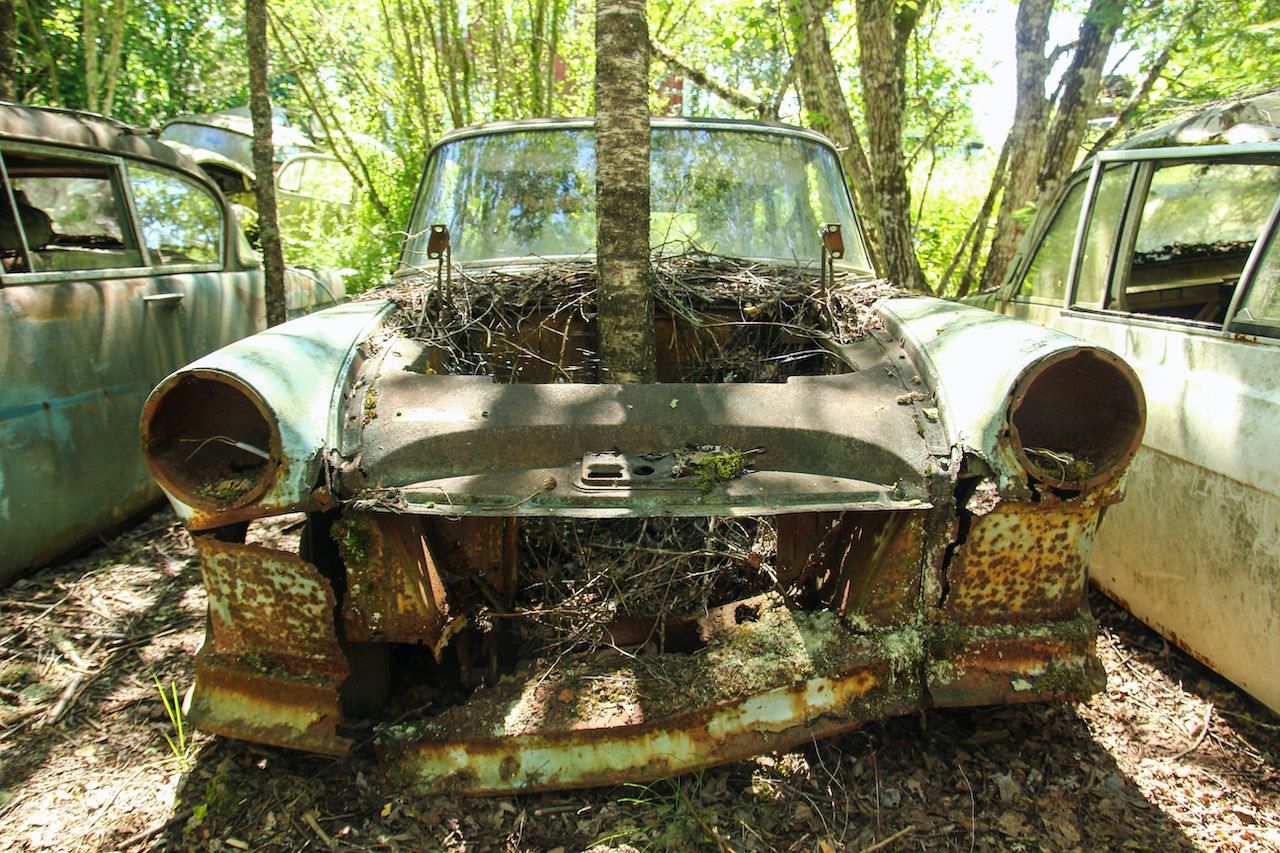 One of the brothers reportedly still lives on the property but doesn’t mind visitors coming to take pictures. He kindly asks, though, that you refrain from stealing car parts or damaging any of the vehicles. According to Atlas Obscura, a handwritten note nailed to one of the buildings reads:

“This car cemetery is private property. You may still look, take pictures but DO NOT take away parts. Do not destroy or in any other way disrupt this place. If you open a car door, please shut it again so the next visitor can get the same experience as you did!! For info: after about 30 burglaries this year I’m fed up with it! I’ve made traps in the buildings so if you get hurt or die, I DON’T CARE! Remember in this place no one can hear you scream…”

The Båstnäs Car Cemetery is located about 12 miles south of the town of Töcksfors. No public transportation runs from Töcksfors to the cemetery, so you’ll have to drive, bike, or hike. Oddly enough, despite its remote location and the reclusive nature of its owners, you can find the place easily just by entering Båstnäs Car Cemetery into Google Maps.

CultureThe 8 Coolest Places in Sweden Worth Visiting Outside of Stockholm
Tagged
Culture Sweden
What did you think of this story?
Meh
Good
Awesome

Why You See so Many Babies In Denmark Sleeping Outside and Alone in Strollers
The 20 Happiest Countries in the World, 2022
13 of the Most Underrated UNESCO Sites You Need To Visit