While American distillers indeed make singular spirits, there’s no denying that the history of American whiskey is inextricably linked to Ireland. The two countries are, after all, the ones that put the “e” in whiskey while most of the rest of the world follows Scotland’s “whisky.”

Yet it’s almost impossible to find American versions of one of the most classic styles of Irish whiskey: single pot still. Almost, but not entirely, thanks to Talnua Distillery in Arvada, Colorado, near Denver, which is the first American single pot still distillery making Irish-style pot still whiskey – a style that uses liquor from one distillery’s pot stills rather than the more common column stills.

Talnua opened to the public on St. Patrick’s Day weekend in 2019. It was close to a decade in the making. Co-founders Meagan and Patrick Miller first tasted Redbreast in 2011 on their honeymoon in a pub in Galway while watching the Ireland vs. USA Rugby World Cup game. A bartender working that day told the story and history of single pot still whiskey, and the two fell in love with the style. That first taste was an inspiration to start the first, and at this point only, US distillery dedicated to making single pot still whiskey. 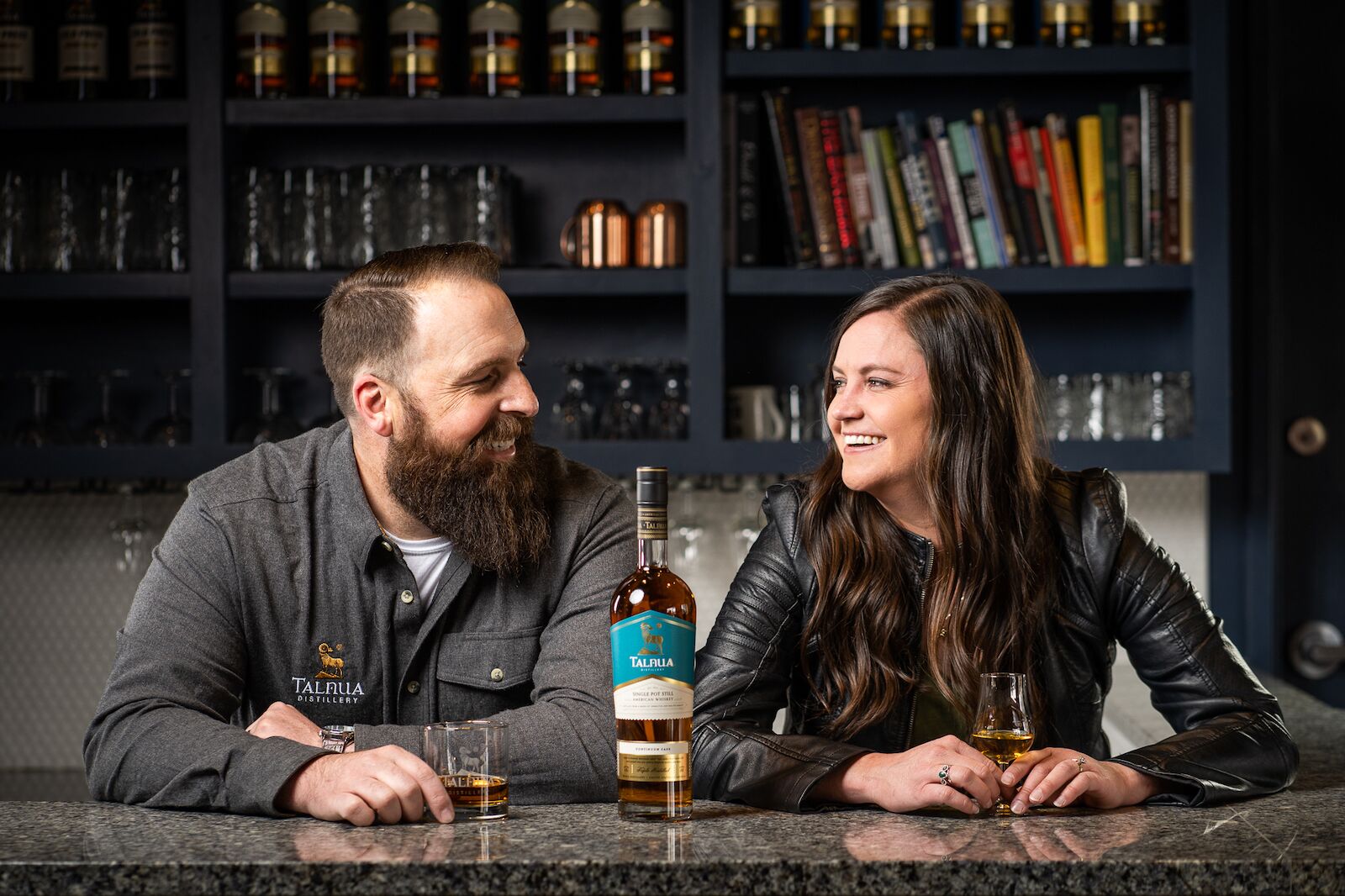 The St. Patrick’s Day opening was “a little bit intentional and a little bit of that luck of the Irish,” Talnua’s general manager Maya Oren tells me. The original opening date was in December of 2018, but that was pushed to February of 2019. The team decided to wait until St. Patrick’s Day for the grand opening, however, which allowed for some more time to plan the opening weekend festivities.

“The reception has been overwhelmingly positive and we are discovering the diversity of palates that enjoy single pot still whiskey,” Patrick Miller says. “Though there is often an educational hurdle in helping people understand this new style, it opens up amazing conversation and the excitement of being some of the first people to try this style of whiskey.”

It’s been equally well received in the home of single pot whiskey, too.

“Our reception in Ireland has been fantastic,” Miller says. “We are still a few years away from being able to distribute there, but we have already done a 2021 collaboration with Boann Distillery and there are more to look forward to on the horizon. It has been amazing to see the enthusiasm across the Atlantic in the ancestral homeland of single pot still whiskey.” 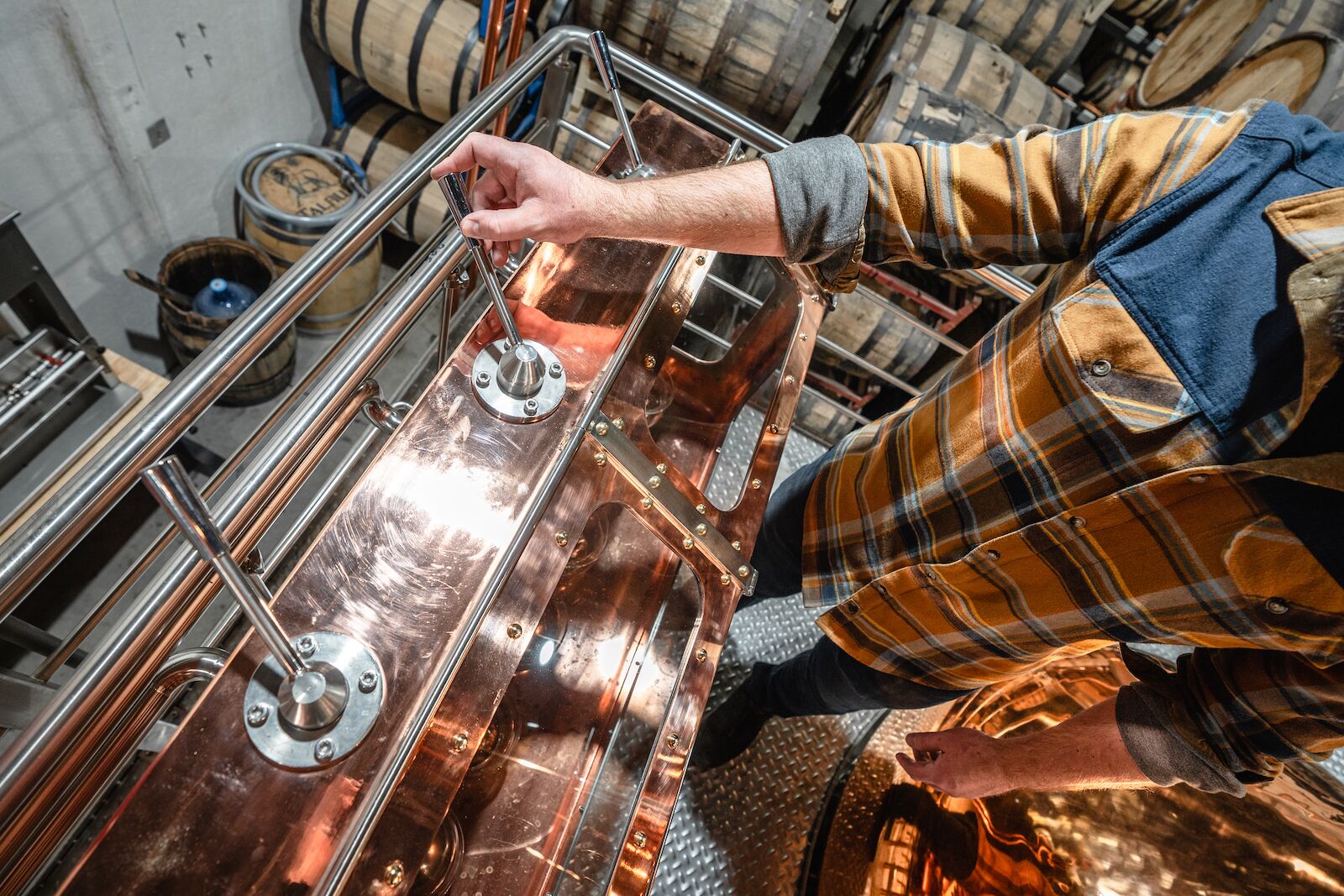 Though the style isn’t common to the Americas, the people who first created it have long influenced the American whiskey of today. About 250,000 Scots-Irish immigrants from Northern Ireland, known as Ulstermen, came to the US in the 18th century. Many went to what was at the time the Wild West and is now the western parts of Pennsylvania, Maryland, Virginia, and North and South Carolina. These immigrants laid the foundation for what would become the American whiskey industry, according to the Distilled Spirits Council.

Talnua comes from the Irish-Gaelic word for land (talamh) and new (nua). Together, it’s a reference to Irish style whiskey being made in a new land. The logo connects the American distillery to Ireland as well: A bighorn sheep with its massive, curling horns (the state animal of Colorado) stands on the Flatirons of the Front Range and looks back at a triskele (a swirling triangle that’s one of the oldest Irish-Celtic symbols). Talnua’s motto is the Irish-Gaelic phrase “faugh a ballagh,” which means “clear the way.”

Colorado’s high-quality barley and water, as well as the wide temperature swings that encourage whiskey barrels to quickly impart flavor, make the state a great place for a single pot still whiskey, Oren says. The strong appreciation that Coloradans have for locally made beer and spirits — plus a culture of grabbing a drink after a day outdoors — helps, too.

The spirits that Talnua makes is unlike anything else that Colorado’s rapidly growing distilling community produces. And it’s all about style.

“Single” is used to describe any style of whiskey that’s made in one facility, versus a blend of whiskeys from various production centers. So a single pot still whiskey is one that’s made by a single distillery using pot stills. The Irish Technical File mandates that pot still whiskey must be made with at least 30 percent unmalted barley, 30 percent malted barley, and can include five percent other grains, like oats, corn, rye, or wheat. The flavor difference between unmalted and malted barley can be thought of as similar to the difference in flavor between cooked and uncooked apples.

Talnua isn’t in Ireland so doesn’t legally have to follow Irish whiskey category laws. They do, however, self-govern to follow them — including by taking the extra effort to use pot stills. 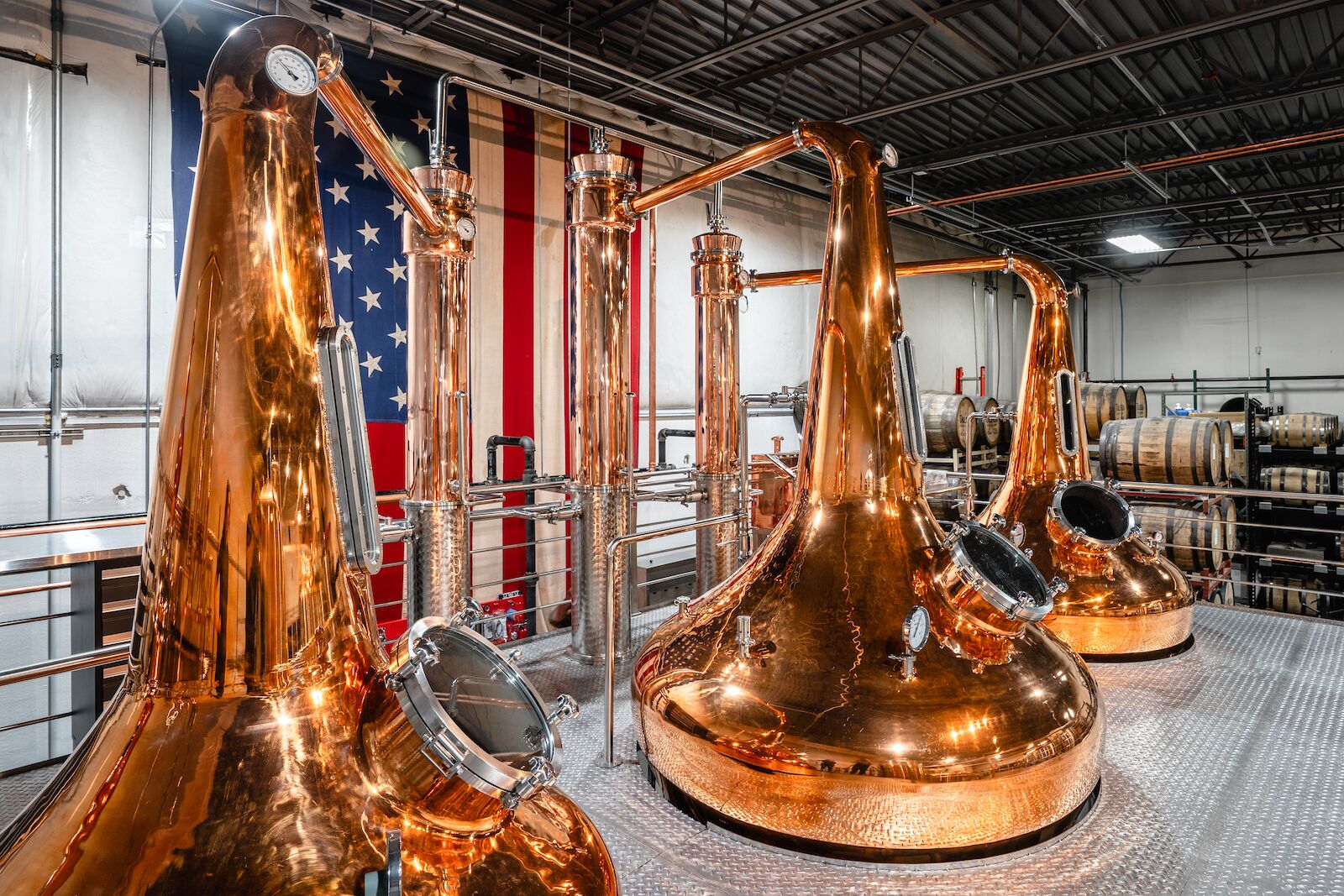 On a trip with Powers Irish whiskey a few years ago to see the Irish Distillers Midleton Distillery (which is where Jameson and Redbreast are made, among others), I felt impossibly small standing next to the three 20,000-or-so gallon pot stills. The experience of standing next to the craft-distillery-sized pot stills at Talnua was of course much different. What came out of those stills, however, was just as enticing.

You can taste a wide spectrum of what the style can do at Talnua. The distillery’s Heritage Selection Whiskey, made with a blend of Irish grain whiskey and Talnua’s own whiskey, is light and easy drinking. The Continuum Cask is a blend of whiskeys at least 18 months old that are continuously added as more whiskey is bottled so that the barrel never empties. The Bourbon Cask & Stave and Virginia White Oak Cask whiskeys may be more familiar to bourbon drinkers thanks to the aging process, while the Peated Cask has a hint of smoky peat from aging in barrels that used to hold Scotch whisky. All are triple distilled in traditional copper pot stills with a 50-50 malted to unmalted barley ratio (the same as the ratio that Dublin’s Teeling Distillery used for its first release).

At the distillery, a tasting room and cocktail bar has indoor and outdoor patio seating. A window wall provides a look to the distilling equipment and aging barrels in the back.

A visit wouldn’t be complete without a taste of Talnua’s other spirits. The Dutch-style gins, made with a base that uses the same 50-50 malted-unmalted barley as Talnua’s whiskey, are enjoyable sipped neat or mixed into one of the bar’s cocktails. At the distillery, you can grab a drink, sign up for a tour of the distillery, and buy some bottles to go. You can even bring your dogs. 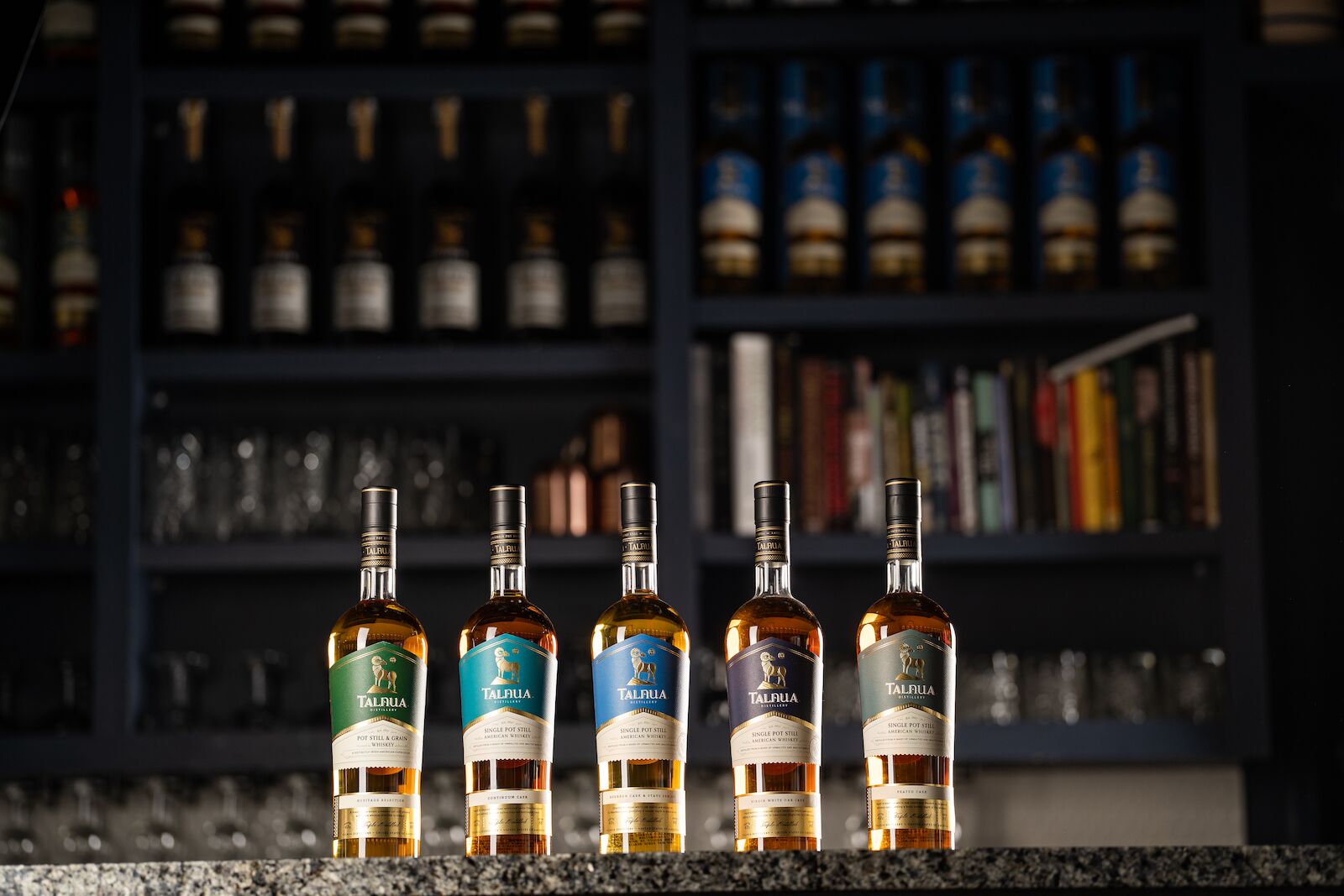 It’s a good time to be making Irish-style whiskey. Irish whiskey is one of the fastest growing whiskey categories in the US, and drinkers are becoming more open to trying traditional styles produced in parts of the world other than what has been historically available.

“The past five years have been an amazing time for single pot still whiskey because it marks a true revival for a historic style of whiskey making,” Miller says. “From a distillers standpoint, it is always exciting to pioneer a category and to be known as a producer of origin. We have a once in a lifetime opportunity to define a category and grow that into something truly special. From a drinking perspective, people are able to engage with whiskey history for the first time in nearly a century and rediscover a style that nearly went extinct.”