The first time we’re introduced to The Crown & Anchor pub in season one of Ted Lasso, the titular character and Coach Beard are reading notes from a suggestion box they’ve set up in the locker room of the football club they’ve been, controversially, put in charge of running. The adorably clueless Midwesterner arrived at the home of AFC Richmond oblivious to even the most basic rules of football. Lasso hoped the suggestion box would help the players feel comfortable with their new boss, but all the suggestions in the box contain rude — or, to borrow a word from the show’s sports commentators, “fruity” — language. That’s when the matriarch of The Crown & Anchor approaches Ted with a vital life lesson.

“You don’t want to let them call you a wanker, Ted. It’s bad,” she says, performing a hand gesture to demonstrate the meaning of the word “wanker.”

Mae is the bartender at The Crown & Anchor, a die-hard AFC Richmond fan, and a maternal figure to the rough and rowdy young men who frequent her establishment. The most fervent of these fans are of course Baz, Jeremy, and Paul. The trio of friends think of Mae’s pub as their second home where they can play darts, down pints, and scream abuse at the TV during AFC Richmond matches.

Mae embodies the energy of The Crown & Anchor: Comforting but rough around the edges; friendly but a little intimidating. Lasso quickly makes the pub his home base. It’s where he gathers the team, strategizes with Coach Beard, and where he defeated the villainous Rupert at darts in front of a crowd of awe-struck onlookers. And it’s at The Crown & Anchor that fans of the show will fall in love with English pub culture. 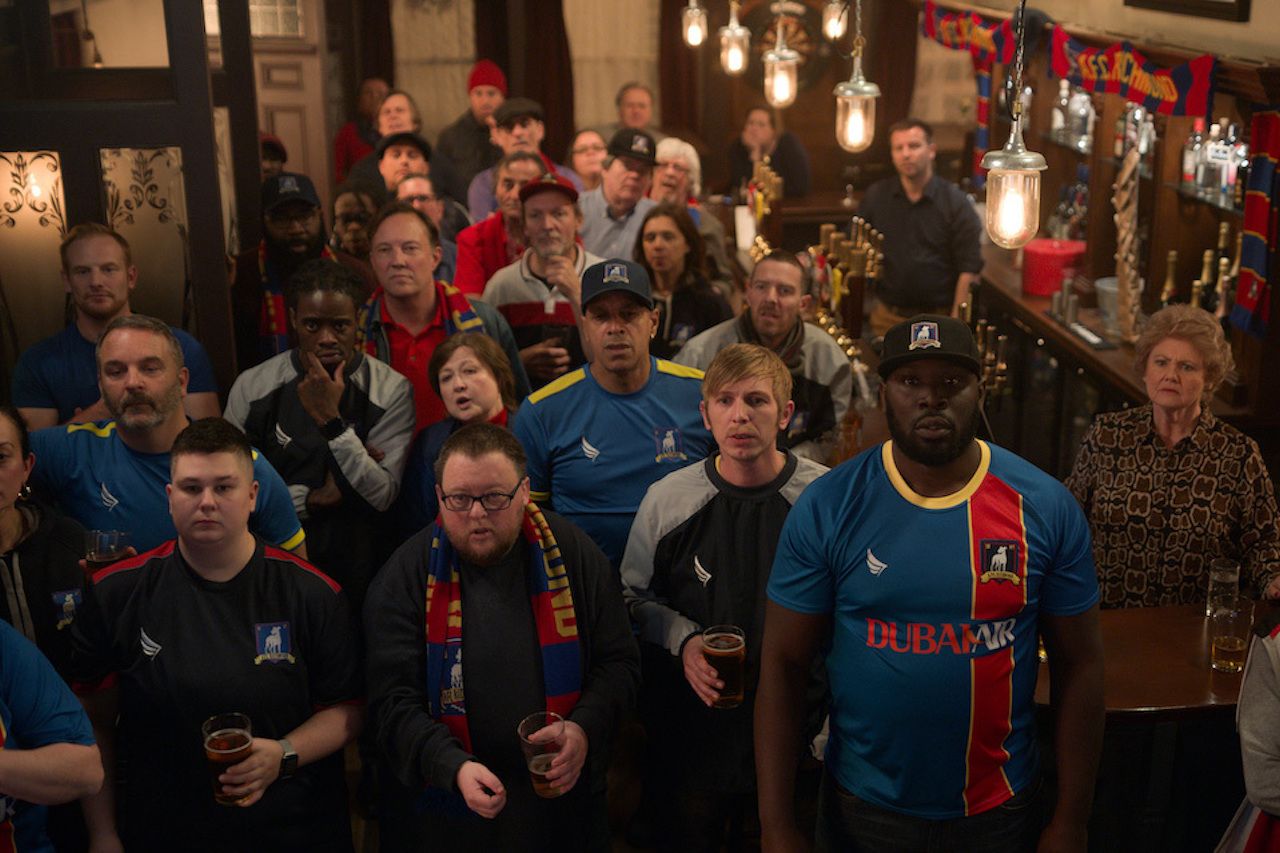 The Crown & Anchor’s charm is further bolstered by its location. The lush pink potted flowers that hang over the windows, the paved sidewalks and picnic tables, and the pair of classic red telephone booths just outside the doors create a cozy atmosphere. It perfectly captures the quaint village life vibes that make England such a desirable place to visit. If you’ve been itching to travel, the homey, comfortable atmosphere of not just The Crown & Anchor but of Ted’s little corner of Richmond in general might tempt you to hop on the next available flight.

There are many pubs like The Crown & Anchor in England. It’s often quiet (unless there’s a match on), and there’s soft carpet underfoot and low yellow lights that add warmth to the dark wooden walls. The hum of conversation and a foamy pint of beer in front of you is completely within reach for any visitor to England. The pub is a staple of British social life, and no matter where on the isle you’re visiting, you won’t have trouble finding one that fits your mood. 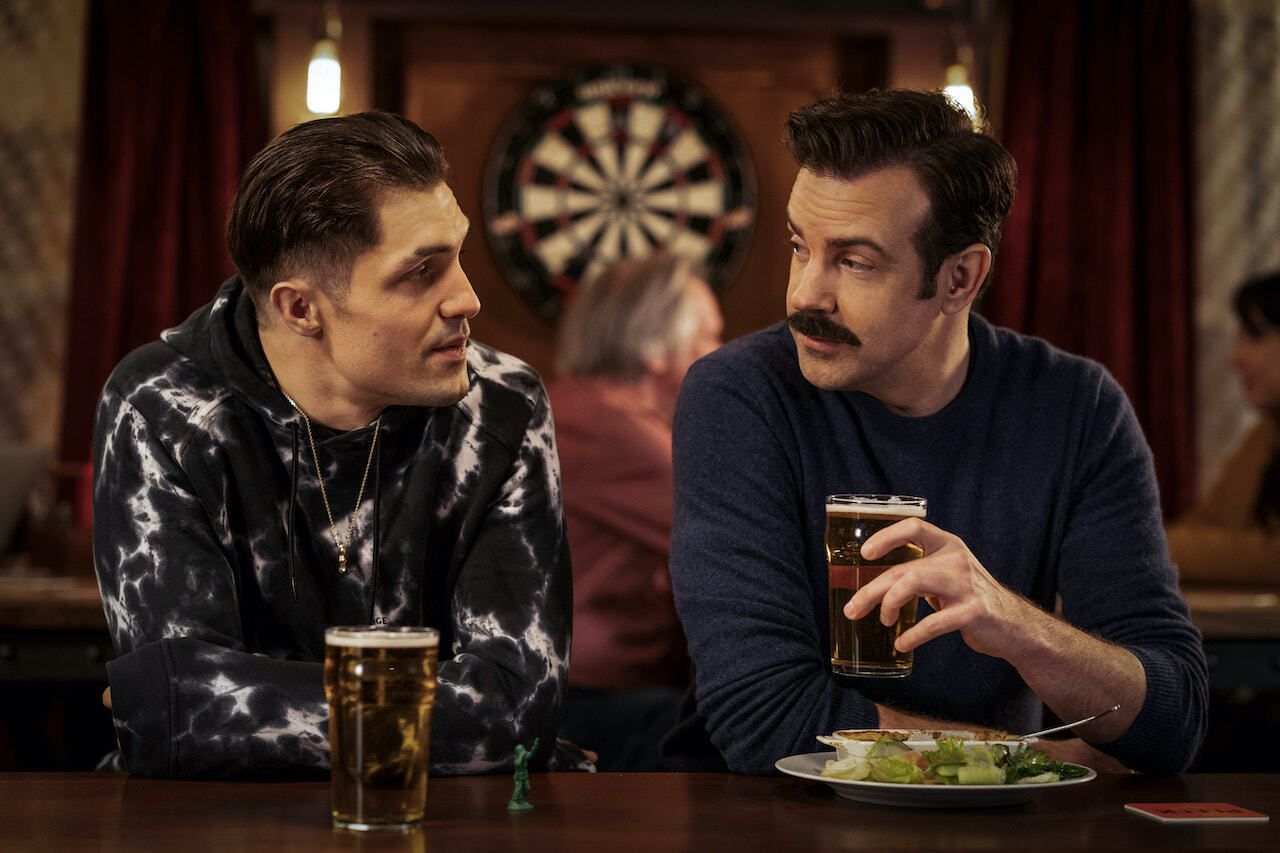 The pub is an unlikely refuge for the misfit Lasso, who has trouble adjusting to English culture (well, mostly just the tea). It might be for you, too. Part of what helps Lasso eventually feel at ease is the all-are-welcome, egalitarian attitude of The Crown & Anchor, which I would wager is common at most real life pubs too. Just about everyone in Richmond is deeply skeptical of Lasso’s American ways and have no problem voicing their dislike of him to his face. Yet there’s the very real sense that when someone steps inside the pub, they become a member of an unyieldingly loyal family united around sports and beer.

This might sound like an idealized depiction of the typical British pub. It also might sound intimidating — especially if you’re walking into a room full of regulars and friends who don’t necessarily look kindly on strangers encroaching on their territory. But speaking from experience, that chilly atmosphere quickly thaws once you settle in and order a drink. It’s well-worth braving an initial bout of perceived hostility to inevitably experience the very warm and pleasant feeling that you’re at home in this country of boots (cleats) and gaffers (coaches). 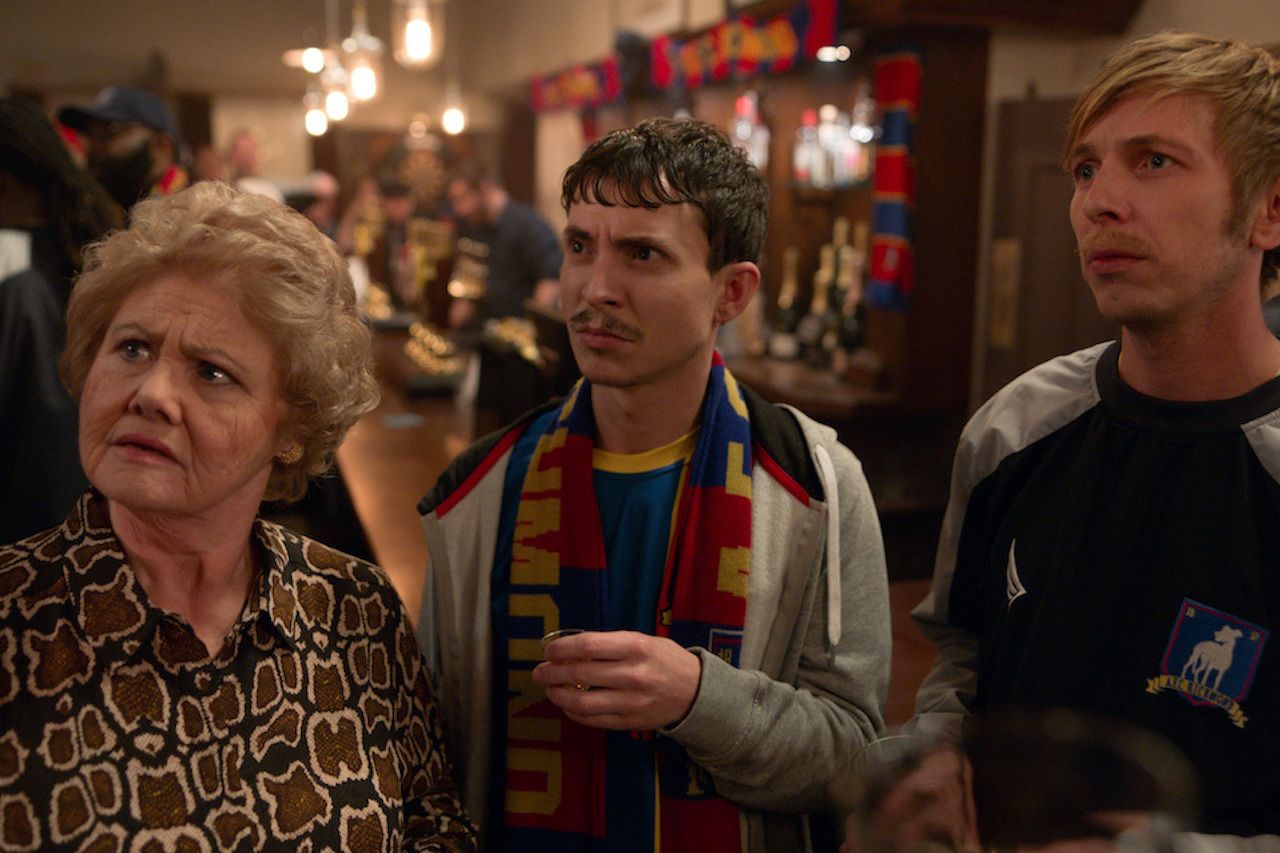 The appeal of The Crown & Anchor in Ted Lasso is that Lasso himself — despite the fact that he’s the manager of a prominent football team — is not a celebrity in the pub. He’s just another guy. English pubs are the perfect place to blend in, sit in a dark corner with a drink, and pretend like you belong even if you’re a little lost. After a long day of exploring, what better way to unwind than among the locals. Within the confines of the pub, it’s easy to shed that tourist label and adopt the gruff-but-kind attitude the Brits are known for.

Ted Lasso may make you feel a lot of things. It may inspire you to behave with more kindness and compassion — even, or especially, toward people you don’t particularly like. It may uplift your spirit, or help you find humor and hope in difficult, even heartbreaking situations. It’s a powerful show that way. At the same time, it also offers a view of England as a place full of creature comforts and simple things — like a public house packed full of your friends or your potential friends. In that, it brings a lot of joy in a time that can sometimes seem desperately hopeless. That’s the sort of place that I would like to visit.