In Northern Ireland nothing says cozy like countryside cottages and whiskey in the winter. Especially in a town synonymous with Irish whiskey itself.

Spirits fans have likely heard a thing or two about Bushmills Whiskey, located in the town of Bushmills. Both pay homage to the nearby River Bush, as well as the large, 17th century windmill erected alongside it.

Though, naturally, Bushmills town has become synonymous with the globally recognized whiskey brand. Bushmills, the distillery, is the oldest licensed distillery in the world, with roots dating back to 1608. Today, Old Bushmills Distillery is best known for its Black Bush blends, as well as its 10, 12, 16, and 21-year-old single malts, all of which use water from the Saint Columb’s Rill, a tributary of the River Bush, as its main source.

For a small town escape filled with whiskey and history, there’s no place like Bushmills.

Things to do in Bushmills 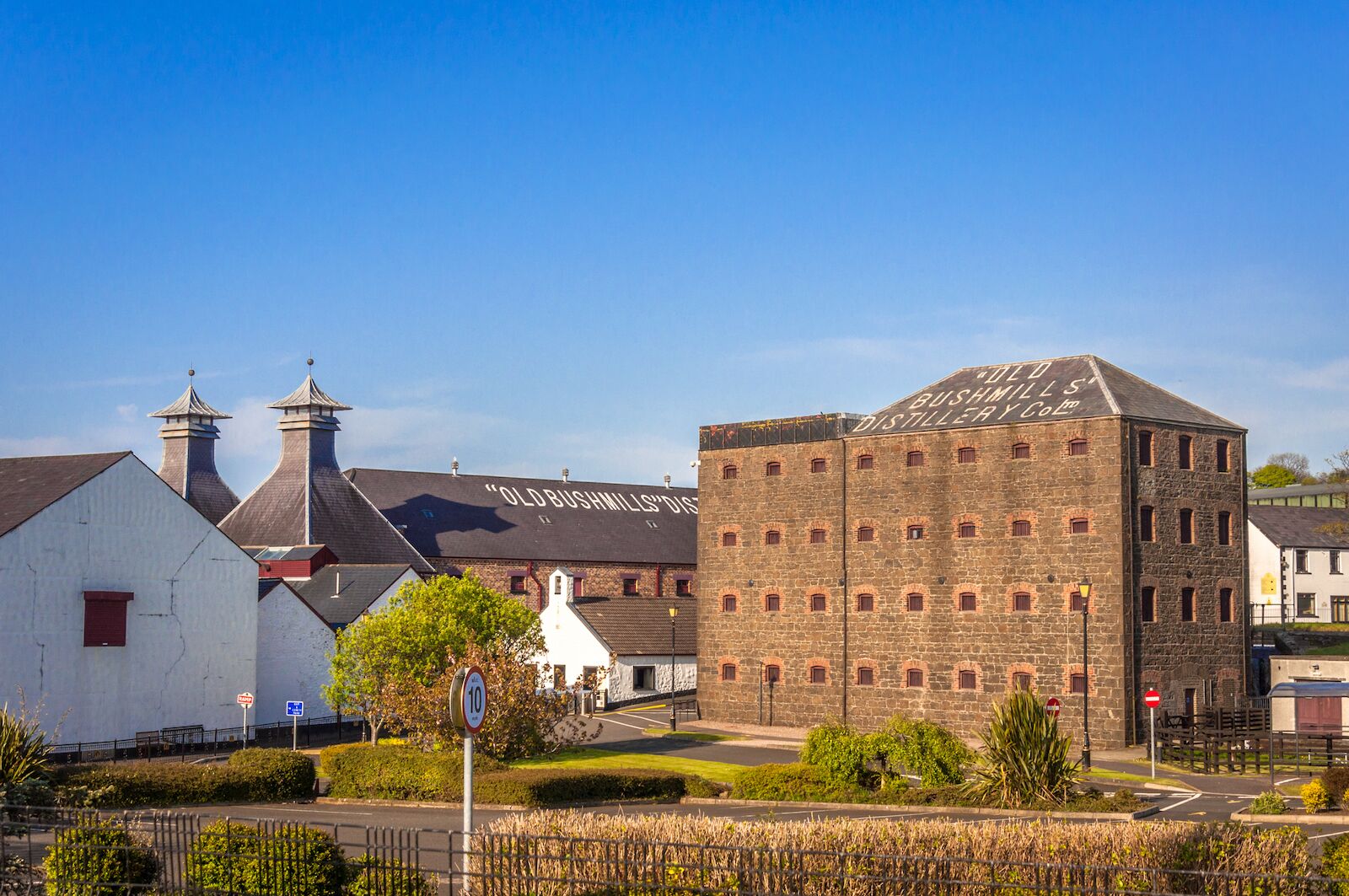 Whiskey lovers, this one’s for you. For those interested in learning more about what’s behind the bottle, head to the historic Old Bushmills Distillery, the oldest licensed distillery in the world. With more than 400 years of know-how passed down through generations, these triple-distilled, 100 percent barley whiskeys are approachable and versatile in cocktails. Grab a guide, learn more about the history and process, and enjoy a few drams along the way. 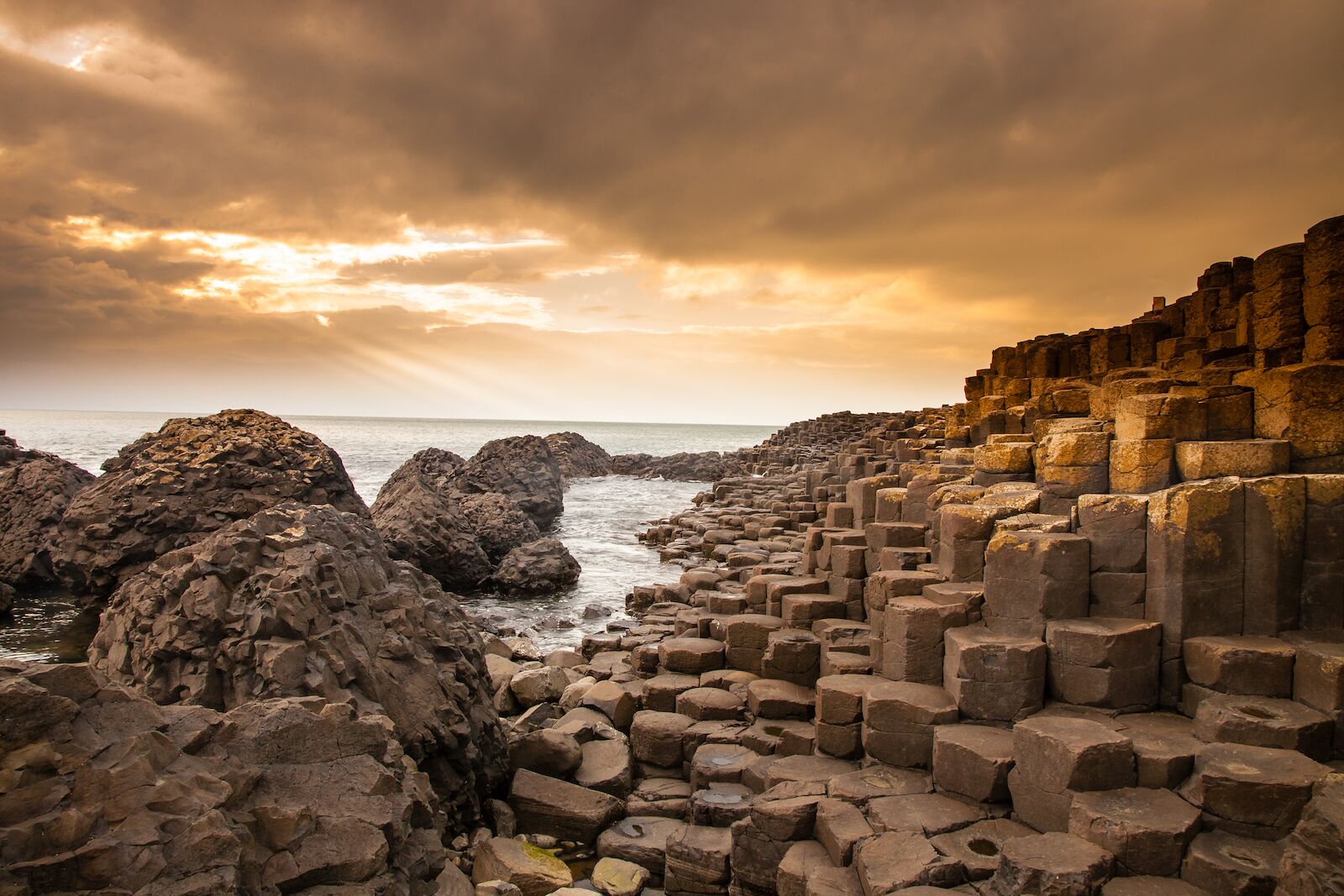 No trip to Northern Ireland is complete without a walk across Giant’s Causeway. Composed of approximately 40,000 connecting basalt columns, this UNESCO World Heritage Site (1986) just a few miles from Bushmills was named the fourth greatest natural wonder in the United Kingdom. Take in the views, breathe in the salty sea air, and be sure to snap a photo in front of the solidified lava columns that stand up to 40 feet high.

Pay a visit to Dunluce Castle 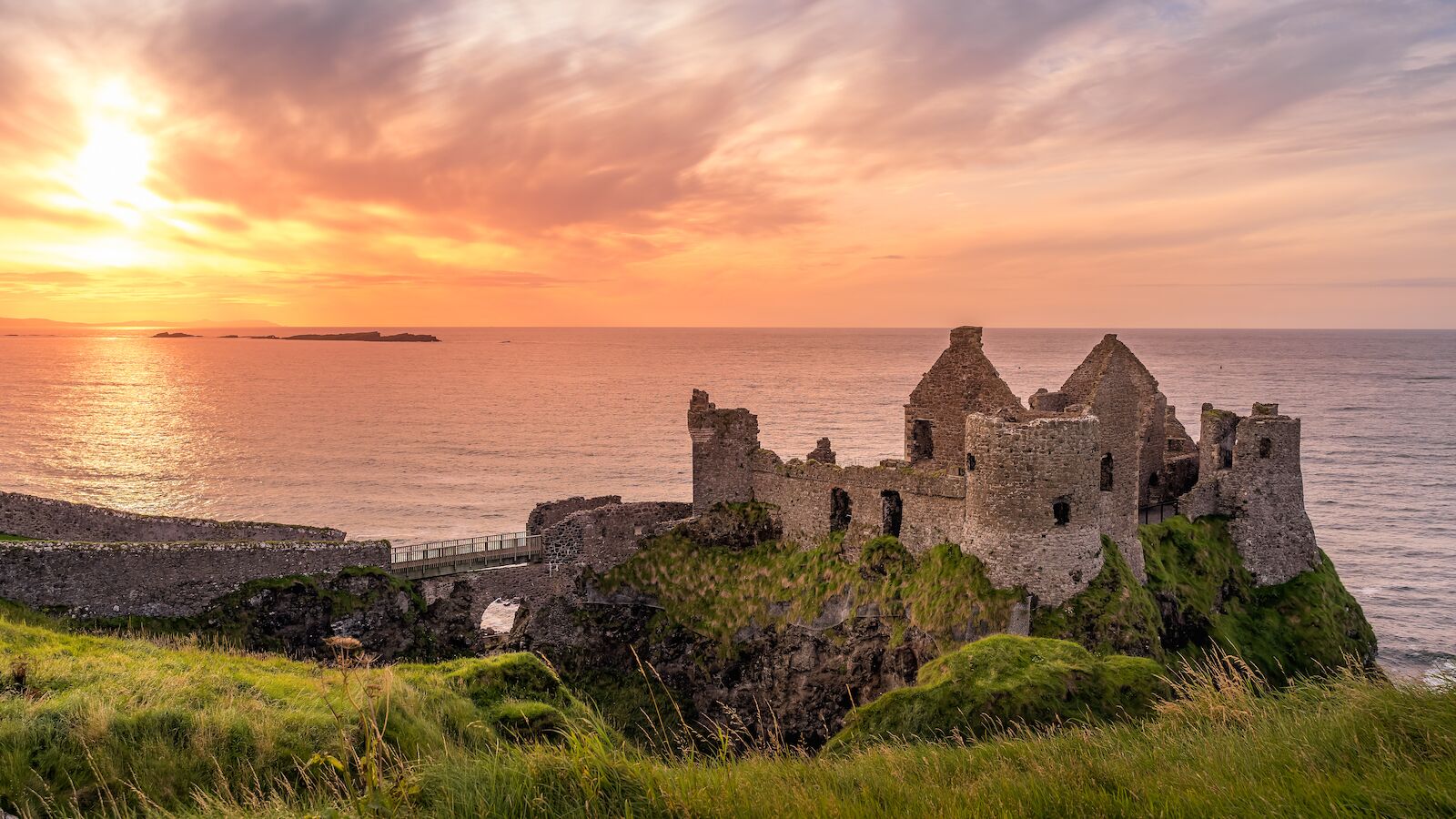 Fans of all things medieval will take delight in a visit to Dunluce Castle, located just a few minutes drive from Bushmills center. Accessible only by footbridge, this now-ruined 13th century structure is home to breathtakingly steep drops and loads of Christian and Viking history. Take a tour with one of the castle’s on-site guides to learn all of the secrets of this medieval treasure.

Stroll along the River Bush 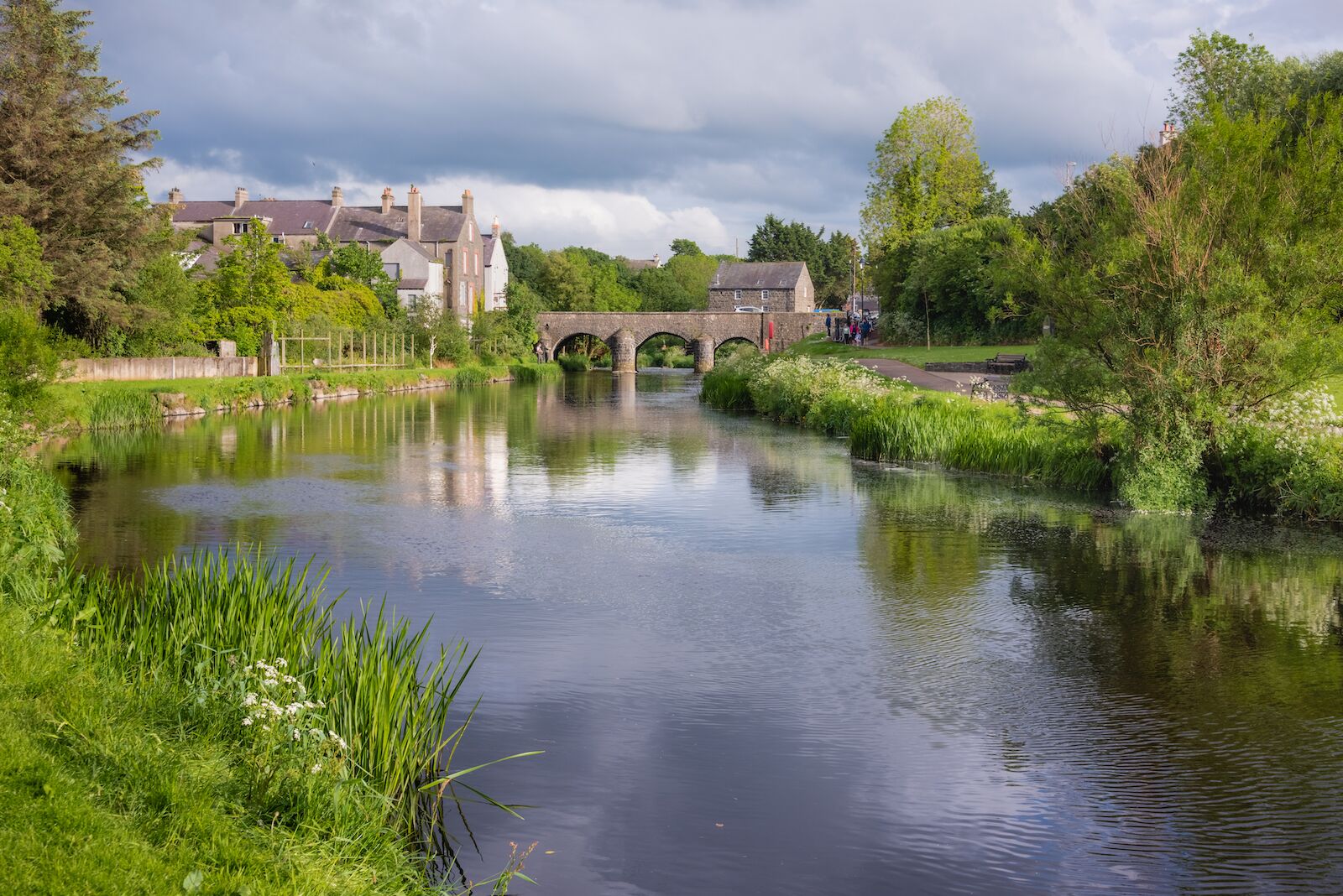 What trip to Bushmills would be complete without a casual stroll along the River Bush? Stretching 33.5 miles, this picturesque river’s source is found at high altitudes in the Antrim Hills, eventually dumping into the sea at Portballintrae. Most importantly for Bushmills, the River Bush gives way to the Saint Columb’s Rill, which is the main water source used for distilling Bushmills whiskey. Take in the green landscapes, enjoy the peaceful atmosphere, and don’t forget a flask of Bushmills to enjoy along the way.

Gaze at the Dark Hedges 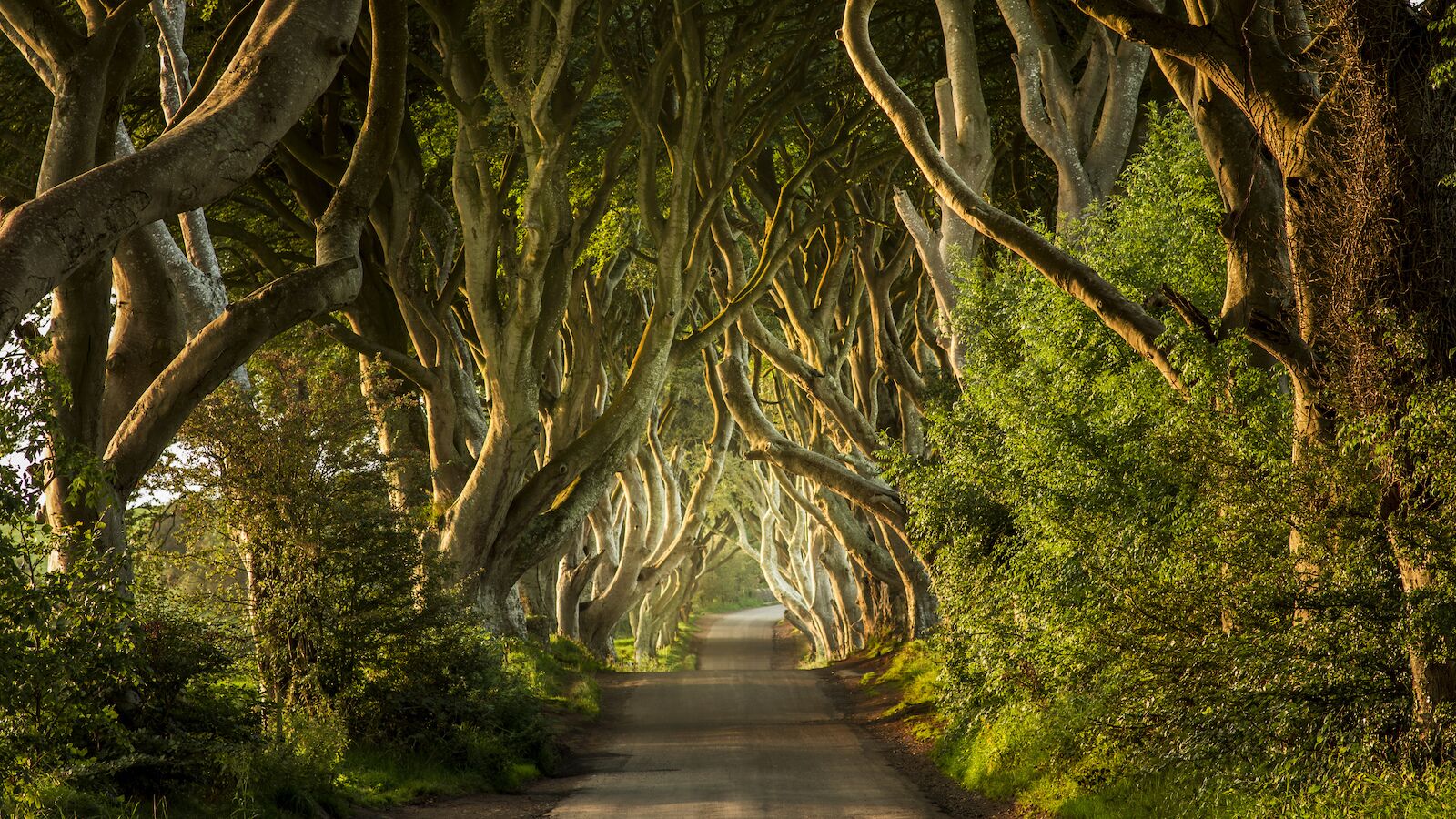 A 20-minute drive from Bushmills, a visit to the Dark Hedges promises an unforgettable experience. This breathtaking street of beech trees was first planted in the 18th century to impress visitors bound for Gracehill House, the mansion of the Stuart family who planted said trees. More recently, the Dark Hedges were one of a handful of Game of Thrones filming locations in Northern Ireland. The trees were depicted in the first episode of the second season of Game of Thrones, when Arya Stark is pictured in a cart on the street after escaping from King’s Landing.

Where to stay in Bushmills

Located in the heart of the Causeway Coast in the center of town, The Bushmills Inn offers luxurious comfort and a seriously affordable price, no matter what time of year you visit. Set in a 17th century Coaching Inn, this 4-star accommodation is warm, welcoming, and nothing short of delightful. In addition to spacious rooms, the Inn is home to a number of cozy fireplaces, as well as an on-site restaurant, bar, and patio, which set the perfect backdrop for enjoying numerous hearty libations. This holiday season, The Bushmills Inn is hosting a variety of seasonal activities, including Christmas Movie Evenings in the Still Room Cinema every Monday through Friday throughout the month of December, as well as daily Festive Afternoon Tea, Christmas Day Lunch, a New Year’s Eve party, and a traditional New Year’s Day Carvery lunch.

Where to eat and drink in Bushmills

For cozy (and convenient, for those staying at the Inn) eating and drinking, Bushmills Restaurant and Bar at The Bushmills Inn is known for all-day dining and a focus on seasonal ingredients. This soulful restaurant is situated across an original 17th stable and wine cellar, with a good number of outdoor tables for al fresco dining in the spring and summer. For a snug, gaslit ambiance perfect for enjoying drams of whiskey, check out The Gas Bar. Whether Bushmills neat or pints of Guinness are your go to, one thing’s for sure—this idyllic atmosphere, complete with a peat fireplace, is nothing short of great craic.

Bilberry Mill Cafe has smoothies, breakfast sandwiches, and a variety of caffeinated beverages. Open from 8:30 AM to 4 PM daily, this convenient coffee shop offers on-site or takeaway breakfast and lunch items, from savory sausage rolls to vegan superfood salads to a variety of frappés, milkshakes, and simple coffees.

Flash in the Pan

Although other nearby fish and chip places look a bit more welcoming from the outside, rest assured, Flash in the Pan is where it’s at. This award-winning, hole-in-the-wall spot is known for its piping hot — and extremely large — portions of fried fish and perfectly “chippy” fries.

Tartine at the Distillers Arms

A post shared by Tartine At Distillers Arms (@tartine_at_distillers_arms)

Located in the original home of the Bushmills Distillery owners, this lodge and pub hybrid consists of three separate dining areas adorned with local artists’ paintings, photographs, and more. Expect hearty fare made with seasonal ingredients, such as baked scallops, Irish lamb shank, pan-seared sea bass, and more. Sunday lunch, a well-curated childrens’ menu, and a variety of wines and cocktails are also available.

While not walkable from Bushmills, the 15-minute drive to this coastal restaurant is absolutely worth it. Expect breathtaking seaside views from this two-story restaurant, as well as ample outdoor seating, should the weather cooperate. From flaky fish and chips to a variety of salads, sides, and other basic lunch staples, this simple-yet-delicious restaurant is perfect for casual lunches with a view.