Northern Ireland’s Atlantic northern coastline is one of striking beauty. A land where wild waves crash against craggy headlands, monolithic sea stacks rise above the foamy tides, and meadows and rolling glens give way to tree-lined paths ambling towards rural cottages and farmhouses. Yet while the arresting scenery is par for the course around here, the aesthetics are just the beginning. The coastline is also studded with parochial seaside towns, eateries dishing out superb local cuisine, iconic pubs, and a world-renowned whiskey distillery, all coalescing to inject real life into the area. If you’ve only got a day to spend on Northern Ireland’s north coast, here’s how you can maximize those 24 hours.

Note that for convenience’s sake, a car is the best way to get around. If you like a drink, consider booking a hotel or Airbnb for the night in Portrush town where you’ll begin and end your tour. 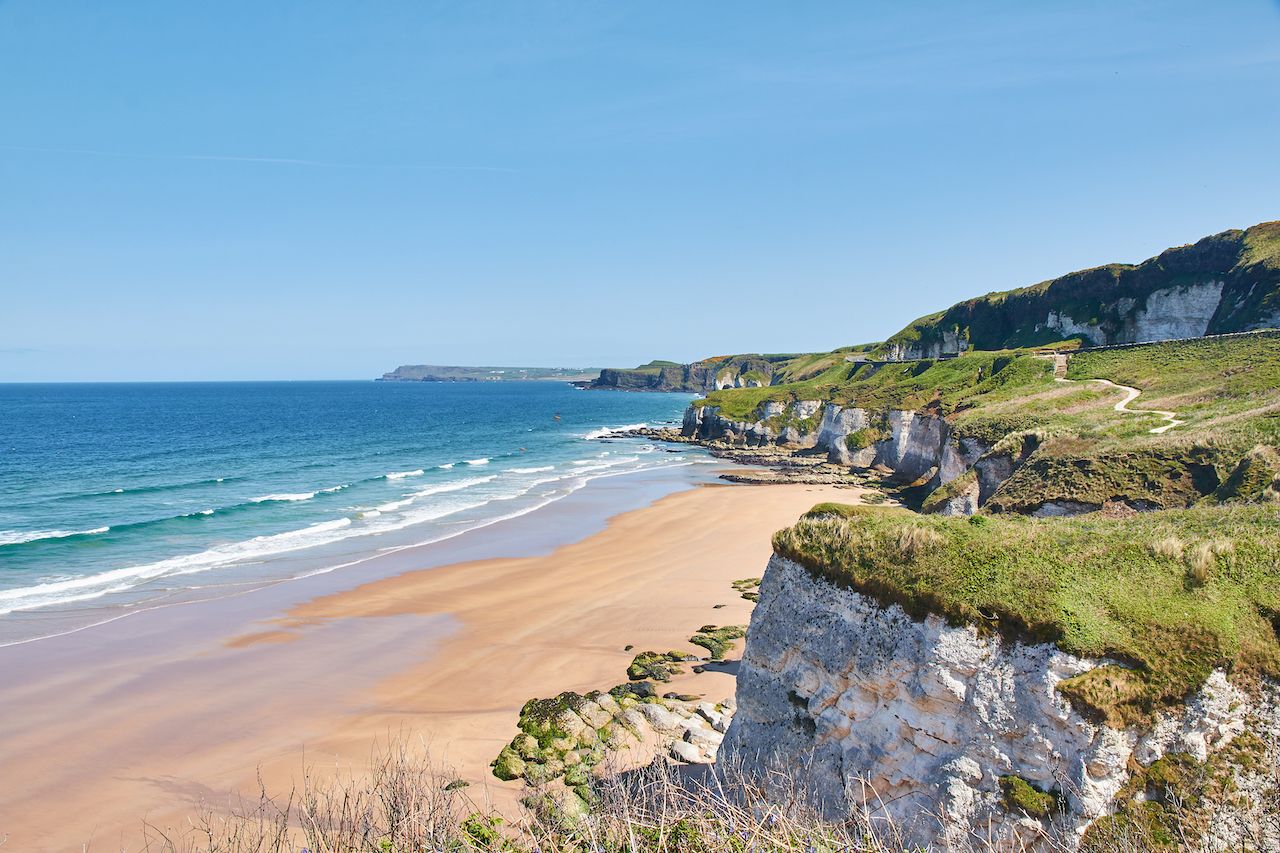 Kick-off the day in Portrush, a seaside town built into a mile-long stretch of peninsula called Ramore Head. The town is banked on either side by two vast beaches, namely the East and West Strands. Park your car and take a stroll along the latter of these towards Babushka Kitchen Café, a one-room breakfast and lunch deli that sits on a small outcrop of land jutting into the Atlantic Ocean.

You can soak up views of the seascape from the café floor or from a scattering of outdoor tables provided the weather allows, which is invariably difficult to predict in this part of the world. Order the slightly fancified recreations of the local “Ulster Fry,” which is made of bacon, eggs, sausages, a selection of breads, and sides.

Assuming that you haven’t been immobilized by the breakfast feast, head back to the car and set course for the fabled Giant’s Causeway, just a few miles along the coastal road to the east. The Causeway, Northern Ireland’s one and only World Heritage site, is a formation of hexagonal basalt columns created by a volcanic fissure eruption 60 million years ago. 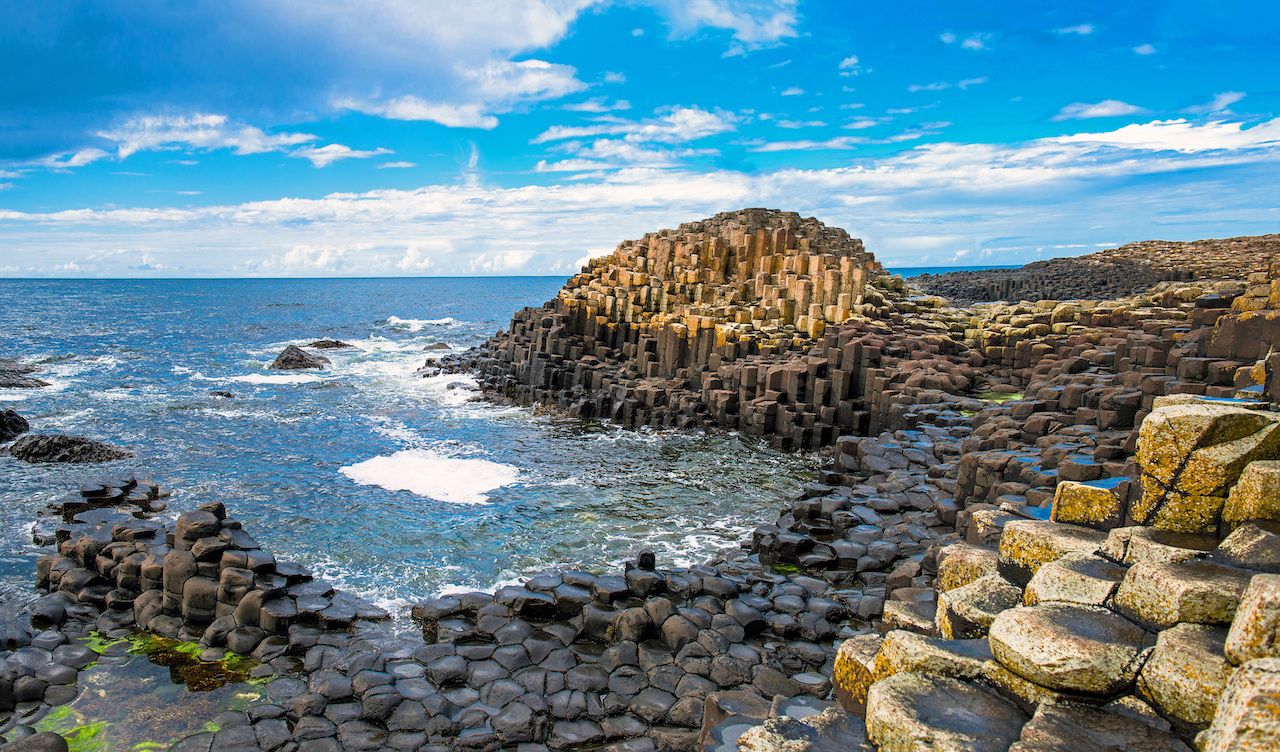 Local folklore suggests that the causeway was actually formed when a battle ensued between two giants: Finn MacCool of Ireland and Benandoner of Scotland. MacCool built a causeway across to the Scottish mainland so that the two, presumably incensed, giants could batter each other. Who actually won the gargantuan brawl is still a matter of contention, but from this myth the causeway was named.

In any case, there are some stellar hiking trails here. The main coastal path guides you along the ocean shore and onto the causeway itself. For the best views, make your way up the set of weather-beaten steps etched into the cliff face just beyond the basalt columns. From here, how long you wish to continue hiking is at your own discretion; the trail could take days to cover in its entirety. There are, however, several promontories along the path providing wild vistas of the ancient coastline, with views as far as the most northerly tip of the Irish mainland: Inishowen Peninsula. These can be accessed within an hour or so from the Causeway, including time to stop for essentials or take a breath of fresh air. 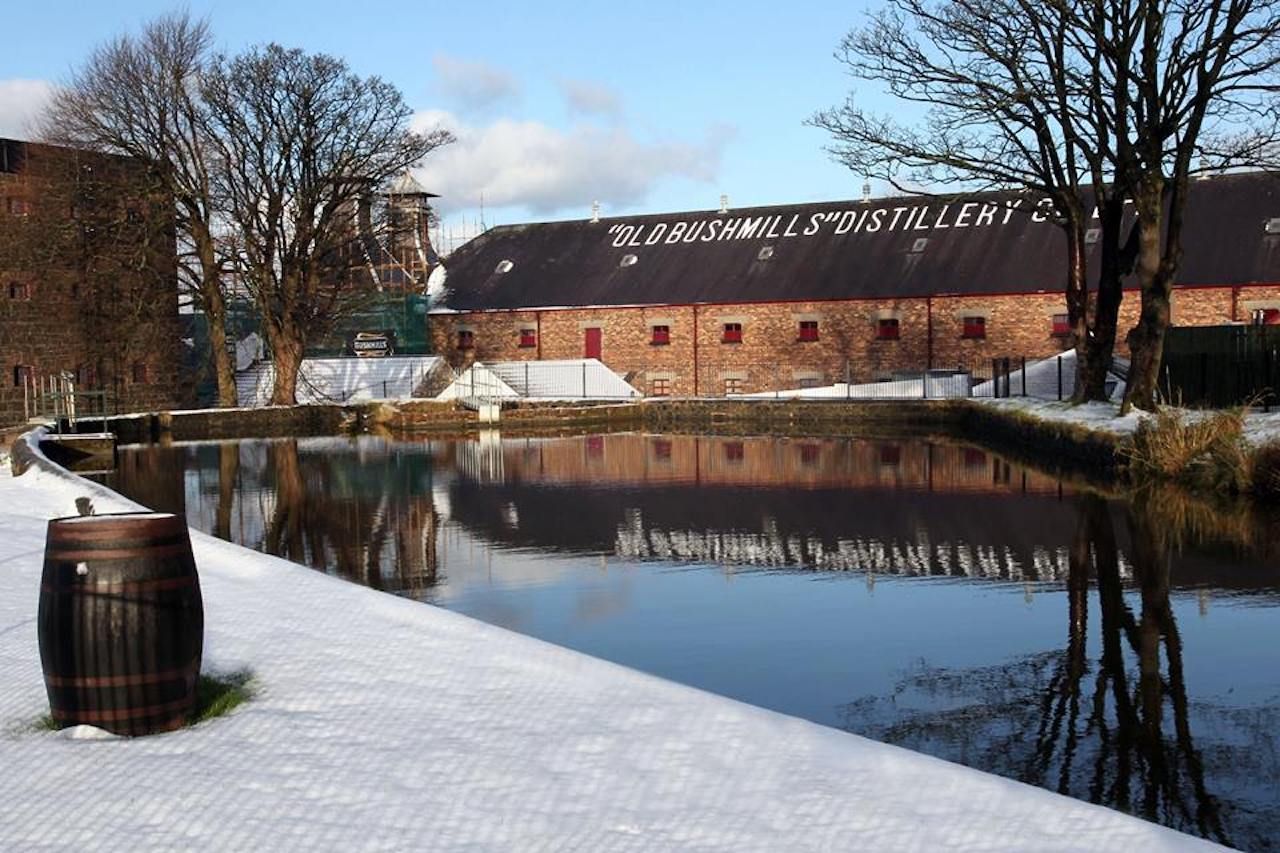 Once you’ve walked up an appetite, retrace your steps to the entrance of the Giant’s Causeway. There’s an old Victorian schoolhouse of greyish stone, surmounted by a miniature belfry that has been gentrified into a bar and restaurant called The Nook. The menu showcases a “taste of Ulster” through classic dishes made with locally sourced ingredients. The seafood chowder is particularly good, as is the coffee and draft beer selection.

With your lunch settled, drive a couple of miles inland to the town of Bushmills, home of the eponymous Bushmills whiskey distillery, which has been crafting whiskey since 1608. The distillery offers tours for less than $13, which can — and in the case of big groups should — be booked in advance. Of course, if you’re the unlucky one behind the wheel, you may miss out on the indulgence of sampling the distillery’s signature blends, but you can stock up on a bottle or two for a later date. 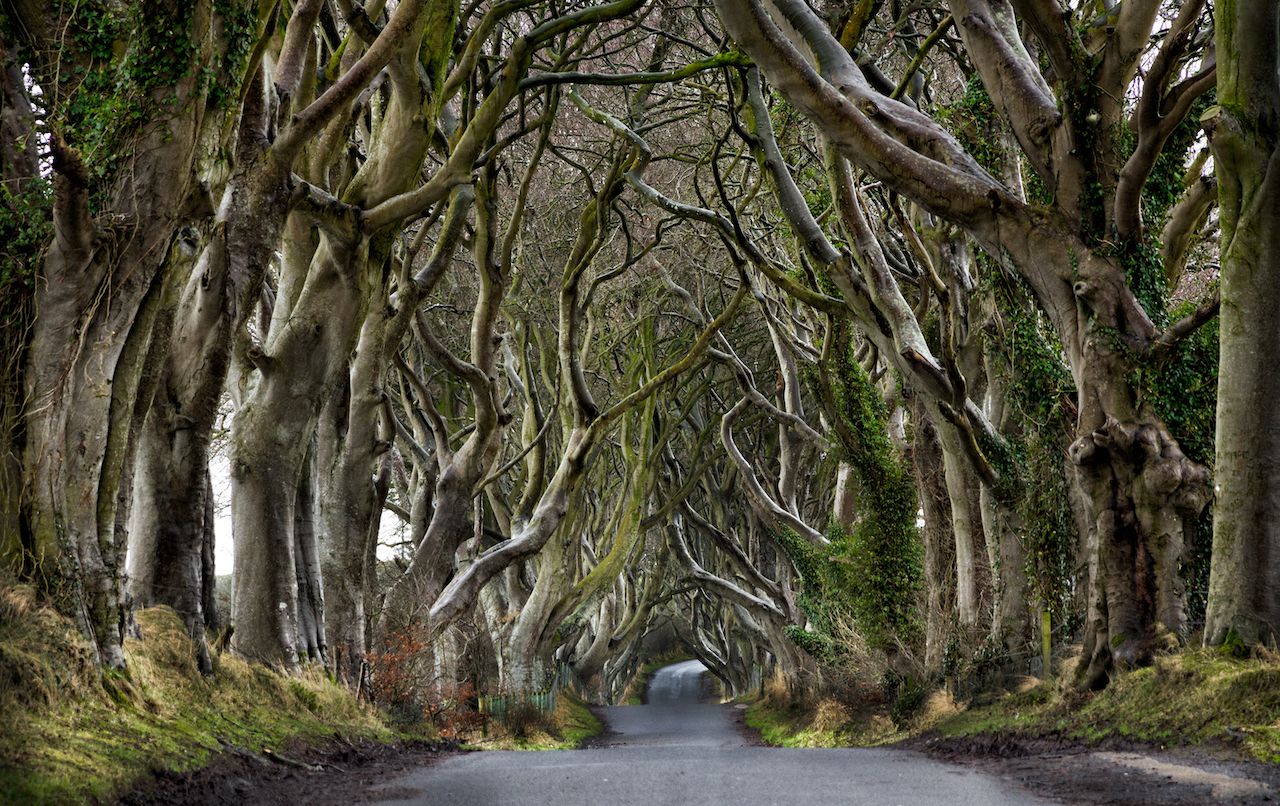 Now it’s time for a slight detour to get your Game of Thrones fix. The Dark Hedges at Stranocum, about a 15-minute drive from Bushmills, have been immortalized as “The Kings Road” in HBO’s hit series.

Located in a rather anonymous stretch of pastoral farmland, the famous procession of over 150 beech trees is immediately recognizable, casting shadows over a long avenue below. Though the trees were planted as an ostentatious entrance to the home of local aristocrats in the late 1700s, they spent much of their life in relative anonymity. In 2019, however, they are one of the top tourist attractions in Northern Ireland. 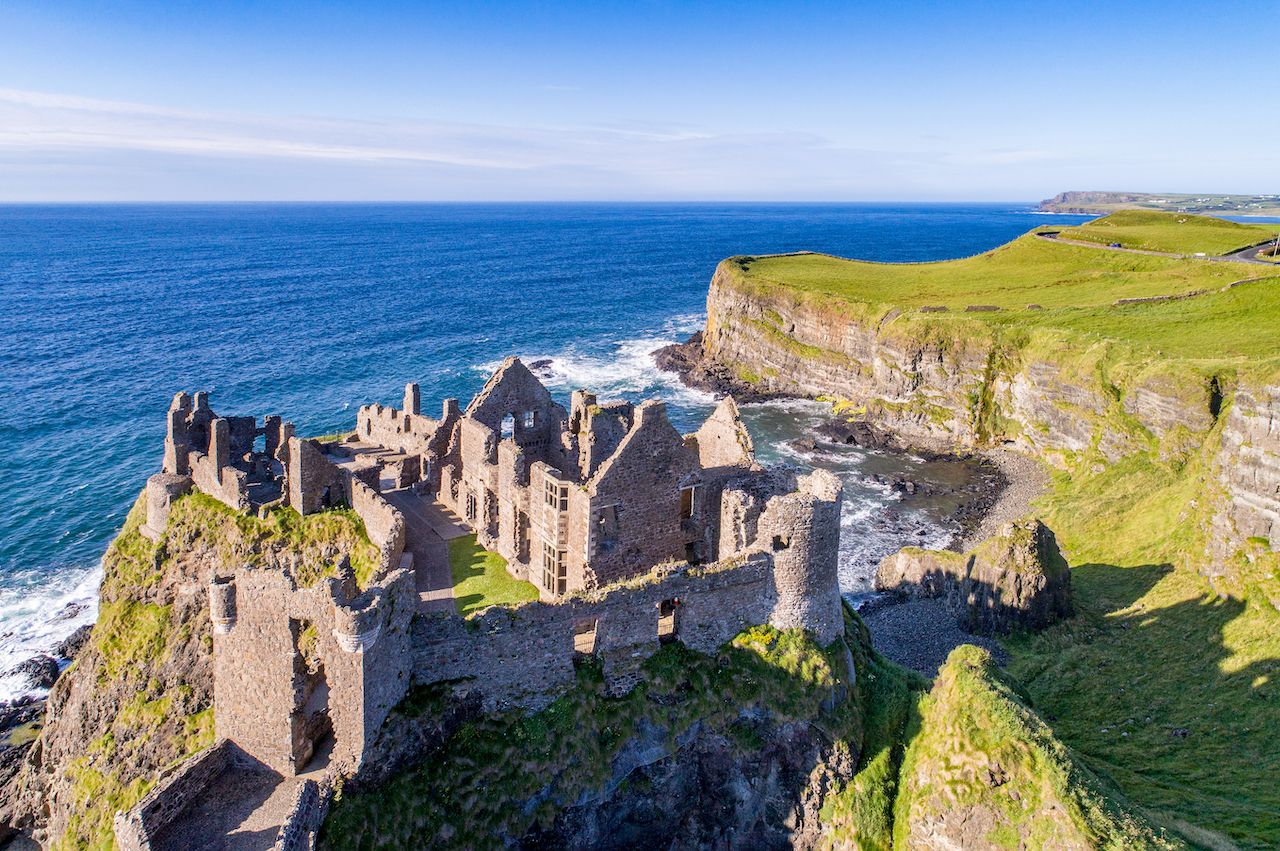 Next, make your way back to Portrush for the evening’s festivities. Taking a direct route north then driving west along the coastal road is your best option. This allows you to catch sight of Dunluce Castle, an ancient ruin sitting on a basaltic outcrop between Portrush and Portballintrae. Approaching the castle from the east, particularly when the sun is setting over its head, provides one of the coastline’s most dramatic views. On seeing it, it will become pretty clear why HBO selected it for the set of House Greyjoy in Game of Thrones. 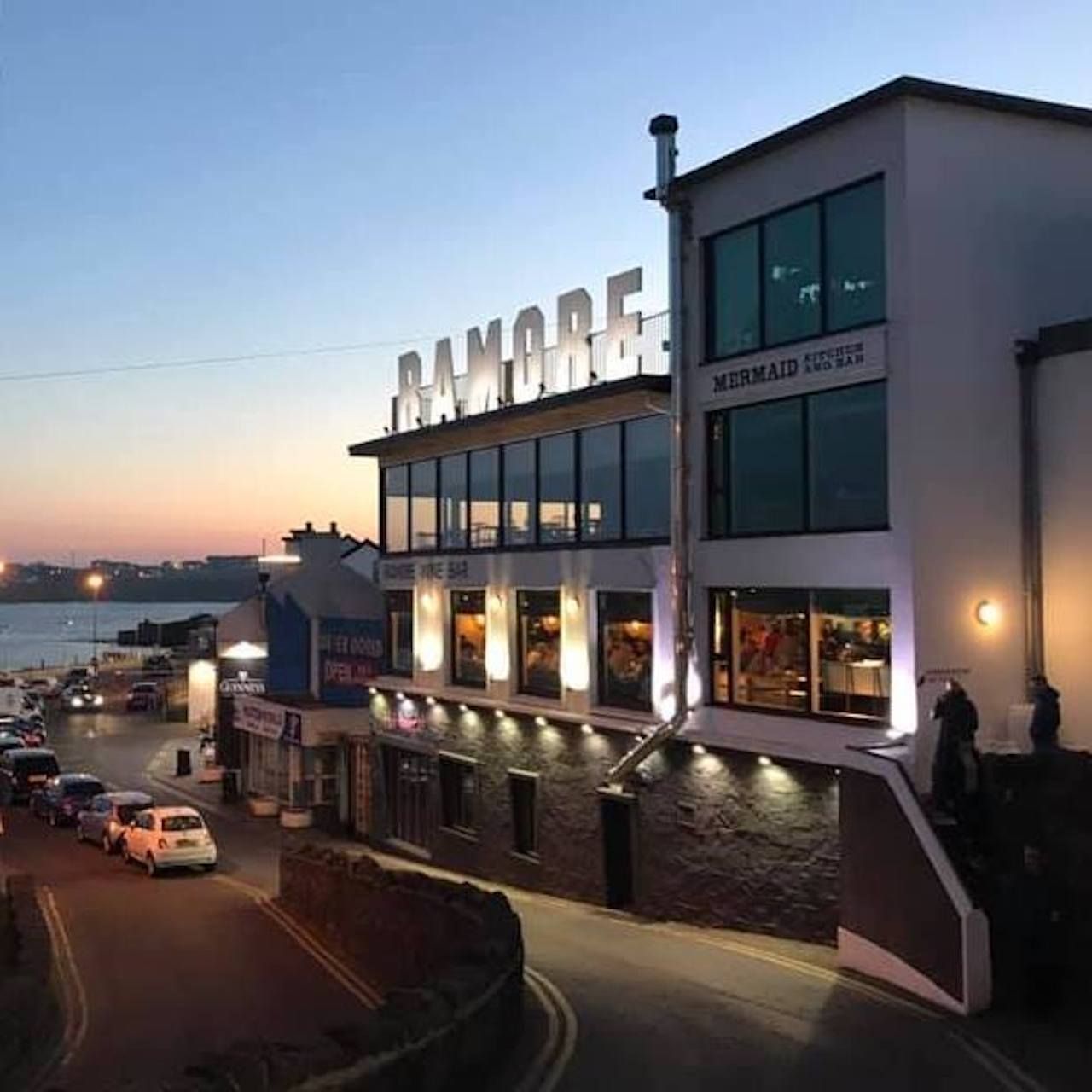 Portrush was the center of the world sporting stage in July when it hosted the 2019 Open Golf Championship at Royal Portrush Golf Club. What endeared the town to so many was not only the fine links setup of the golf course but also the lively drinking and dining scene. Given the festive scene, we highly recommend leaving your car at the hotel before embarking upon the evening’s activities.

The Ramore complex, named after the peninsula on which it’s located, is a hive of activity in the evenings, with a host of homey restaurants and bars by the water’s edge. Spoiled for culinary choice though you may be, a T-bone steak in the Ramore Wine Bar is hard to beat — with all the trimmings and homemade pepper sauce, of course. The rest of the menu is beefed up with local stalwarts, and dishes inspired by continental European and Asian cuisine. Prep yourself for a satisfied, yet marginally distended, stomach; the portions are extremely generous.

After dinner, head next door to the Harbour Bar for a liquid dessert. Located on the ground floor, this iconic pub exudes the warmth and salubrious character you’d expect in a traditional Northern Irish watering hole: cramped, cosy confines; ramshackle furniture; alcohol memorabilia and paintings by local artists covering up the aging paintwork; and a buzzing atmosphere, wall to wall with imbibers and raucous laughter. On the weekends, local musicians and singer-songwriters fill the bar with sounds of Ulster, while a famous face or two may populate the tables. A pint of Guinness in here is a must.

If you fancy something a trifle more urbane, head up to the first-floor gin bar where the environs, dressed in maritime memorabilia and illuminated craft spirit bottles, are somewhat classier. Whichever place you choose, the merriments are likely to continue long into the night.

Restaurants + BarsThe Best Non-Touristy Pubs in Dublin To Drink at Instead of Temple Bar
Tagged
Travel Insider Guides Northern Ireland
What did you think of this story?
Meh
Good
Awesome

Hilarious ‘Derry Girls’ Now Have Their Own Derry Mural