To many around the world, Qatar is somewhat of an enigma. The small country of 2.8 million people in the Persian Gulf is barely visible on a world map beside the hulking landmass of Saudi Arabia. Despite its size, however, Qatar is the fourth wealthiest country per capita in the world, and much like Dubai, it is a beacon of progress in the Middle East. This is partly why Qatar was chosen to host the 2022 World Cup, taking place from November 21 to December 18. The illustrious international competition might have put the tiny country on your radar for the first time, and maybe you’re even considering making the trip overseas for a match or two. The good news is, Qatar’s size isn’t indicative of its level of fun. Whether or not you’re a huge soccer fan, there are plenty of things to do in Qatar to keep you busy here when you’re not at a World Cup match. 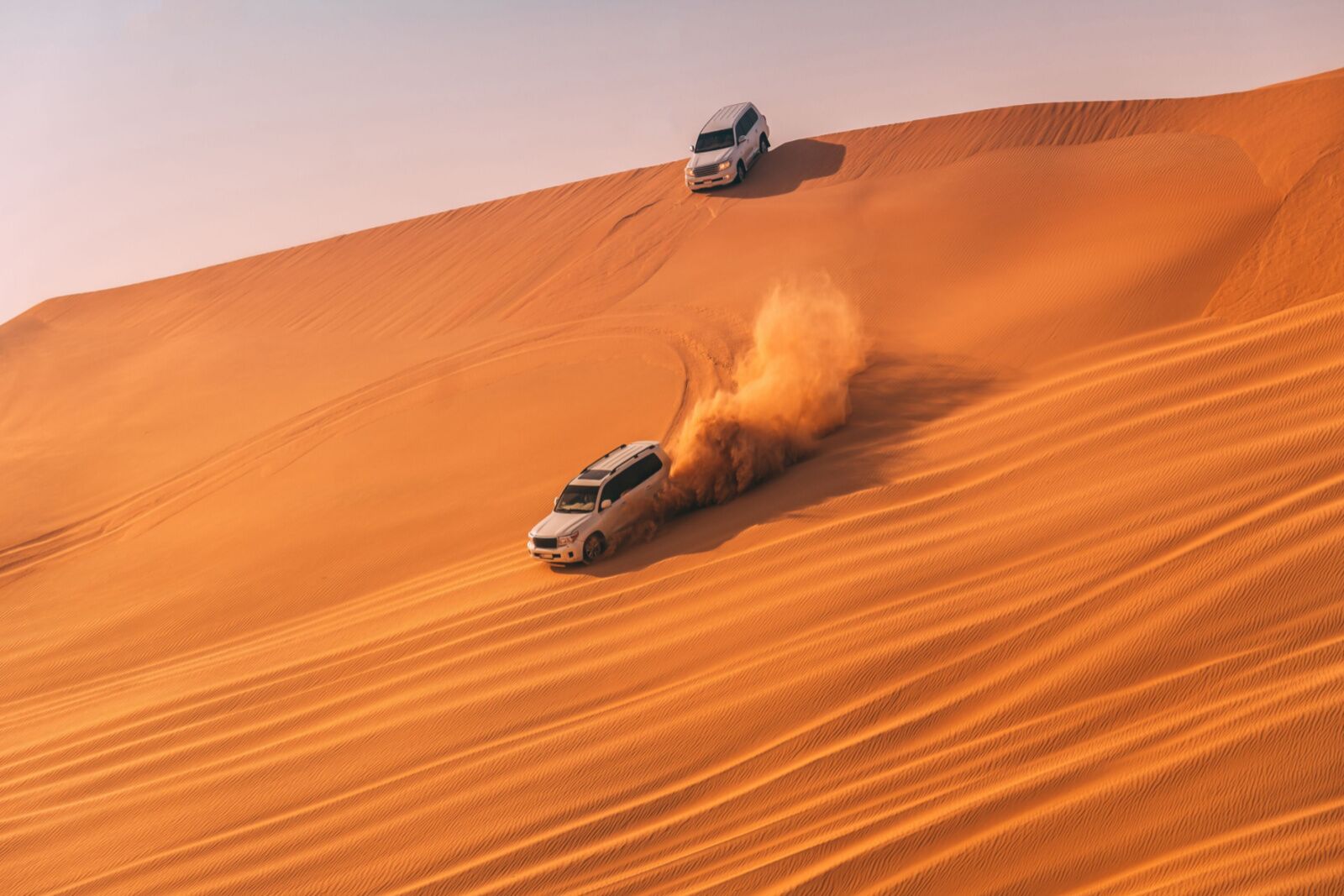 Dune bashing probably conjures images of swinging a huge wrecking ball through mounds of desert sand, but it’s not quite that extreme. In Qatar, dune bashing means riding along the dunes and bracing yourself for all the bumps that come with it. It’s not exactly a Mad Max-style, life-or-death proposition, but it’s still quite an adrenaline rush. Tour operators will usually pick you up right at your hotel and bring you into the desert for the thrill ride. Many even choose to extend the experience by camping in the desert – either in glamping-style luxury or in a self-pitched tent. Either way, a desert excursion is an absolute must for any visit to Qatar. 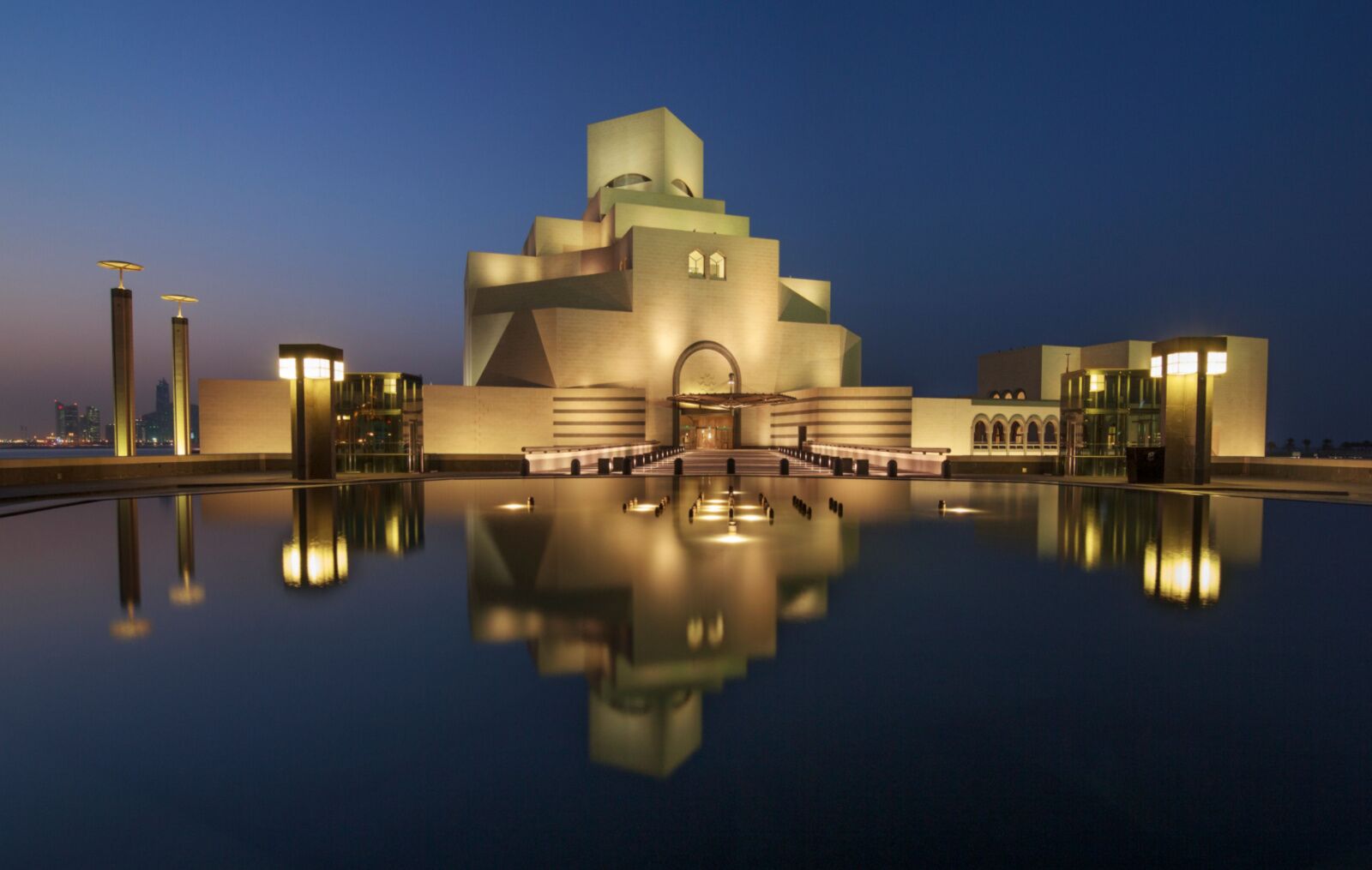 Those interested in Qatari culture will find no shortage of museums in the country, particularly in Doha. The Museum of Islamic Art is one of the most popular museums in Qatar, containing Islamic patterns, jewelry, textiles, and calligraphy from three continents. Many of the items date all the way back to the 7th century. There’s also a restaurant with an outdoor terrace on the top floor of the museum, with stunning views of Doha. The National Museum of Qatar is another museum you should visit in Doha. Looking like a spaceship crossed with a blooming flower, the museum tells the story of Qatar’s development from the desert to the contemporary age, and is perhaps the best way to learn about Qatar’s history. 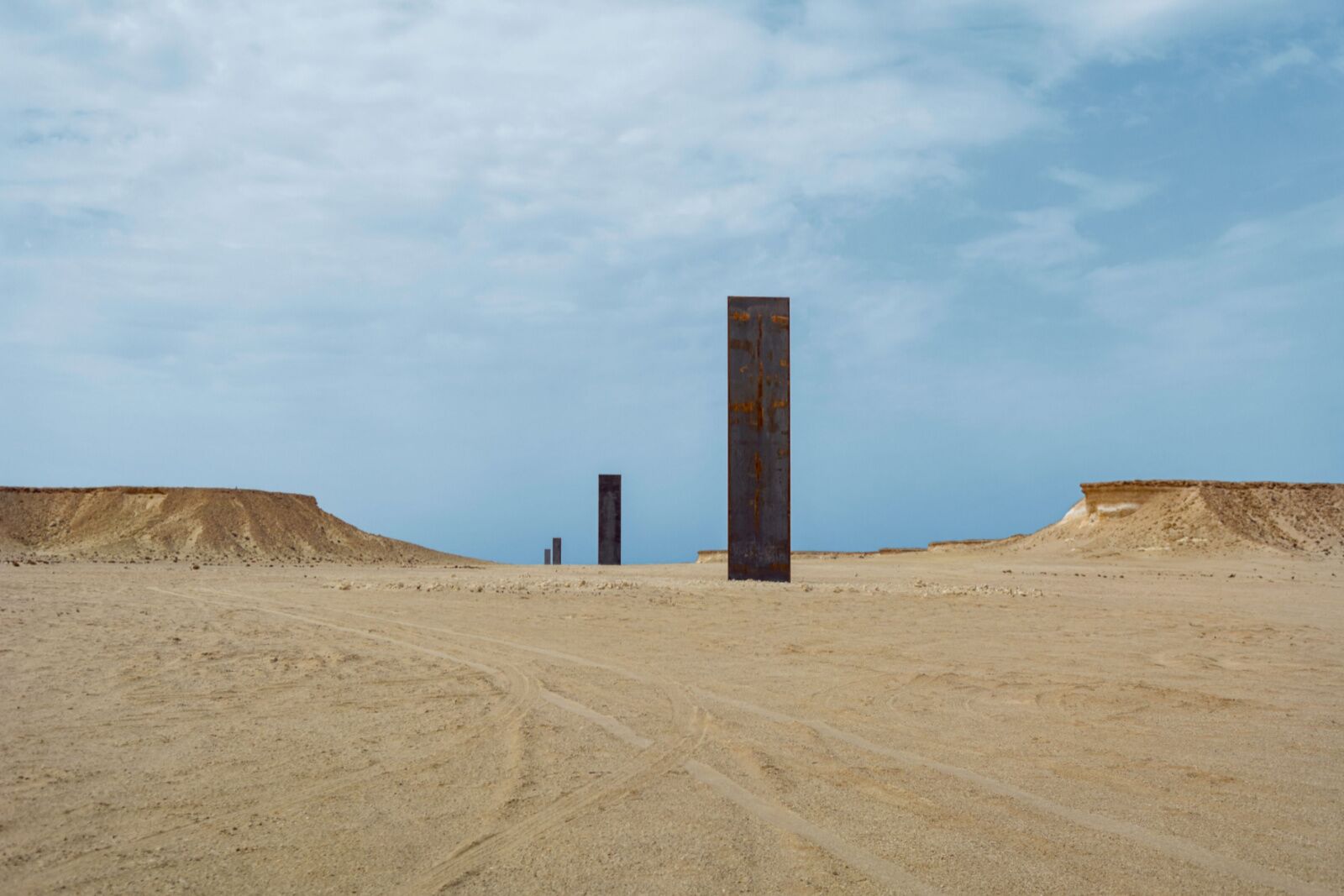 In the Brouq Nature Reserve, about 30 miles northwest of Doha, you’ll find Qatar’s best-known art installation, created in 2014 by sculptor Richard Serra. The East-West/West-East installation is composed of four pillars, each 50 feet tall, lining the desert corridor to the sea. The height of the plates represents the height of the old sea levels. The area is now immensely popular with visitors, particularly those interested in art and culture. A Fatbike tour is one of the best ways to see the installation, with tour companies operating off-roading adventures into the desert. 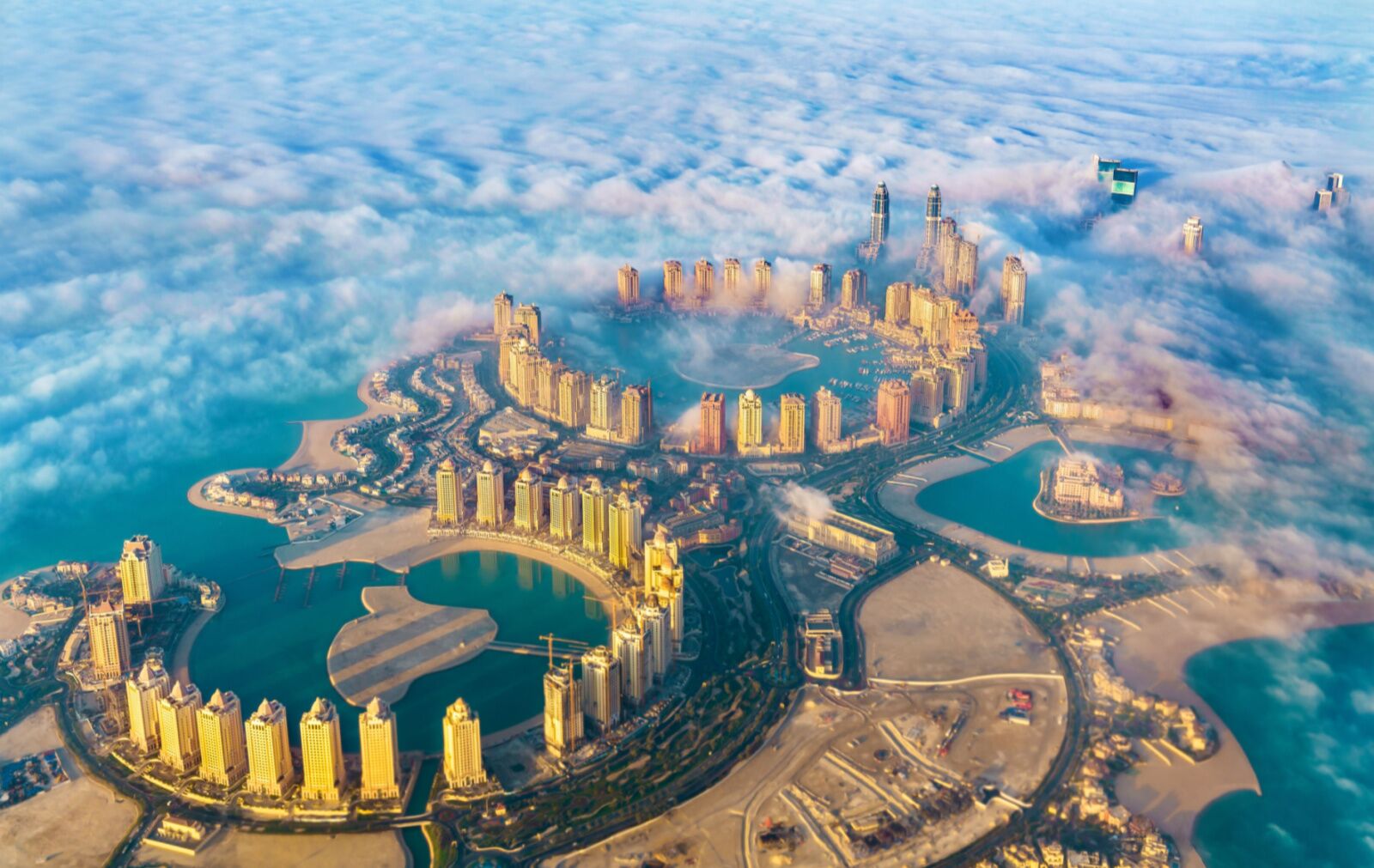 The Pearl is an artificial island 1,100 feet off the coast of Doha’s West Bay Lagoon. The pinnacle of luxury and extravagance in Qatar, The Pearl is defined by its expensive townhouses, resorts, beaches, upscale restaurants, and entertainment venues. It will be composed of 13 islands once construction is complete, making it one of the largest real estate developments in the Middle East. The Taliamare Beach Club at Qanat Quartier Beach is one of the most luxurious places to stay on The Pearl, as well as the Marsa Malaz Kempinski hotel, located on its very own islet. 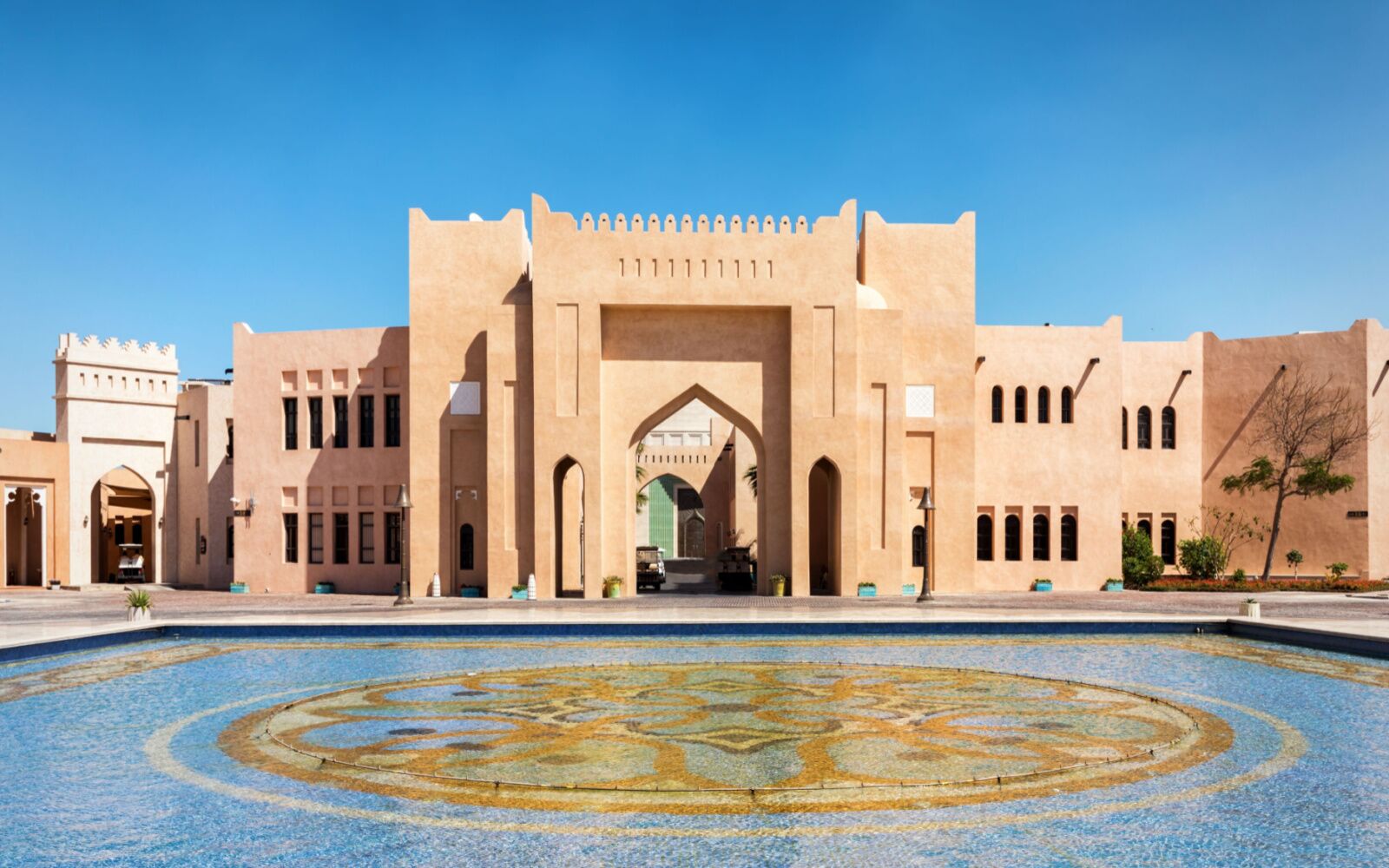 Those looking to dive into Qatari culture can’t skip the Katara Cultural Village. Also known as the “Valley of Cultures,” the village opened in 2010 as part of the Doha Tribeca Film Festival, and remains immensely popular with visitors. In addition to hosting festivals like the Traditional Dhow Festival and the Palestinian Heritage Festival, the village is home to several international restaurants and kiosks, beaches, and a maze of passages and waterways often utilized by artists and filmmakers. There’s also an opera house, which the Qatar Philharmonic Orchestra calls home, and an outdoor amphitheater overlooking the sea. 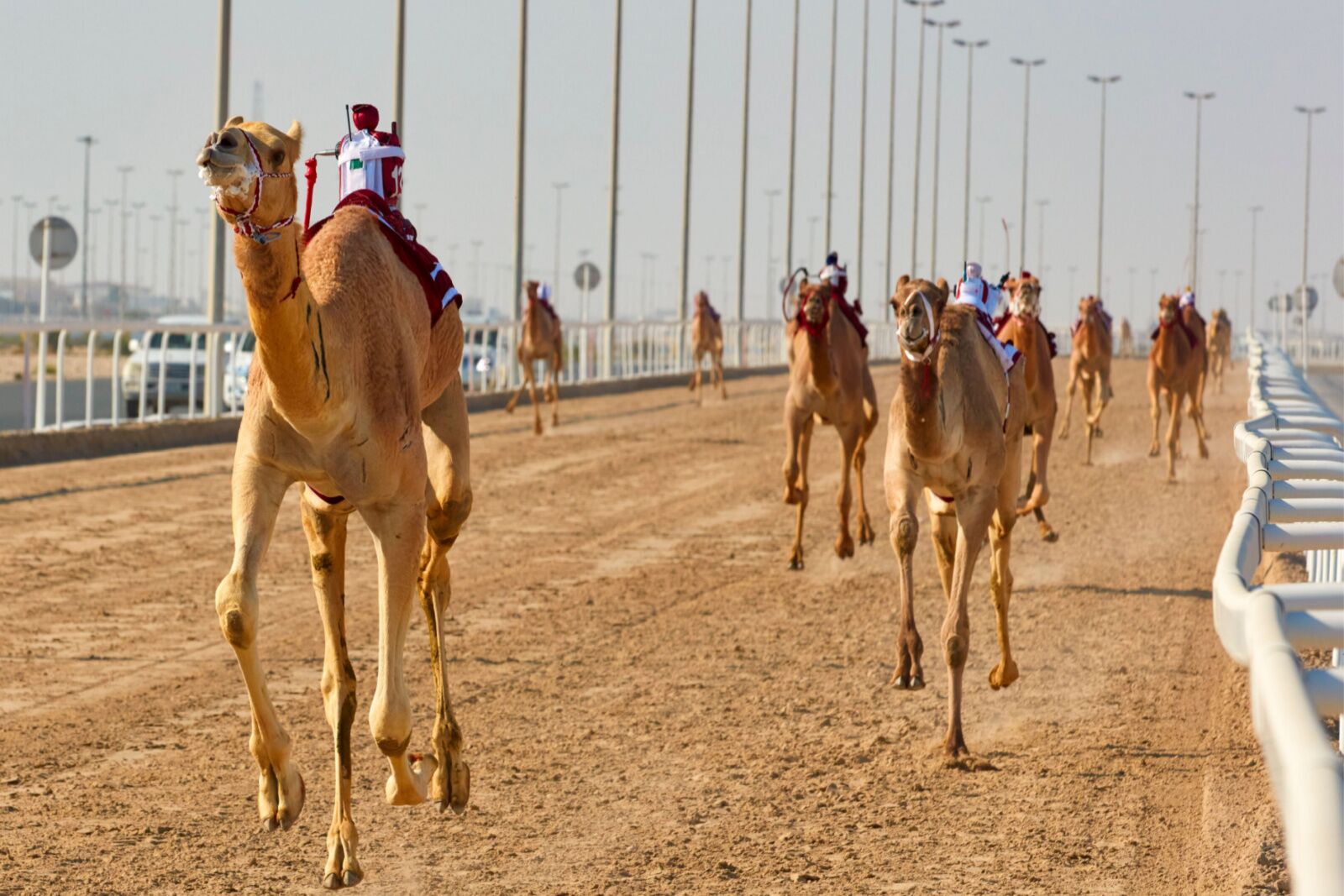 If World Cup soccer matches don’t quite stoke your enthusiasm, how about camel racing? About an hour from Doha, in Al Shahaniya, camel racing is the big draw, and it’s one of the most beloved events among Qataris. Camels run at speeds of up to 40 mph in short sprints, and are ridden by remote-controlled robot jockeys dressed in colorful racing clothes. A traditional sport of the country’s sheikhs, it’s now a popular public event, with tracks holding tournaments every Friday from November to February. Even if there are no races going on when you visit, the public is still allowed to stop by and observe the camels in training. 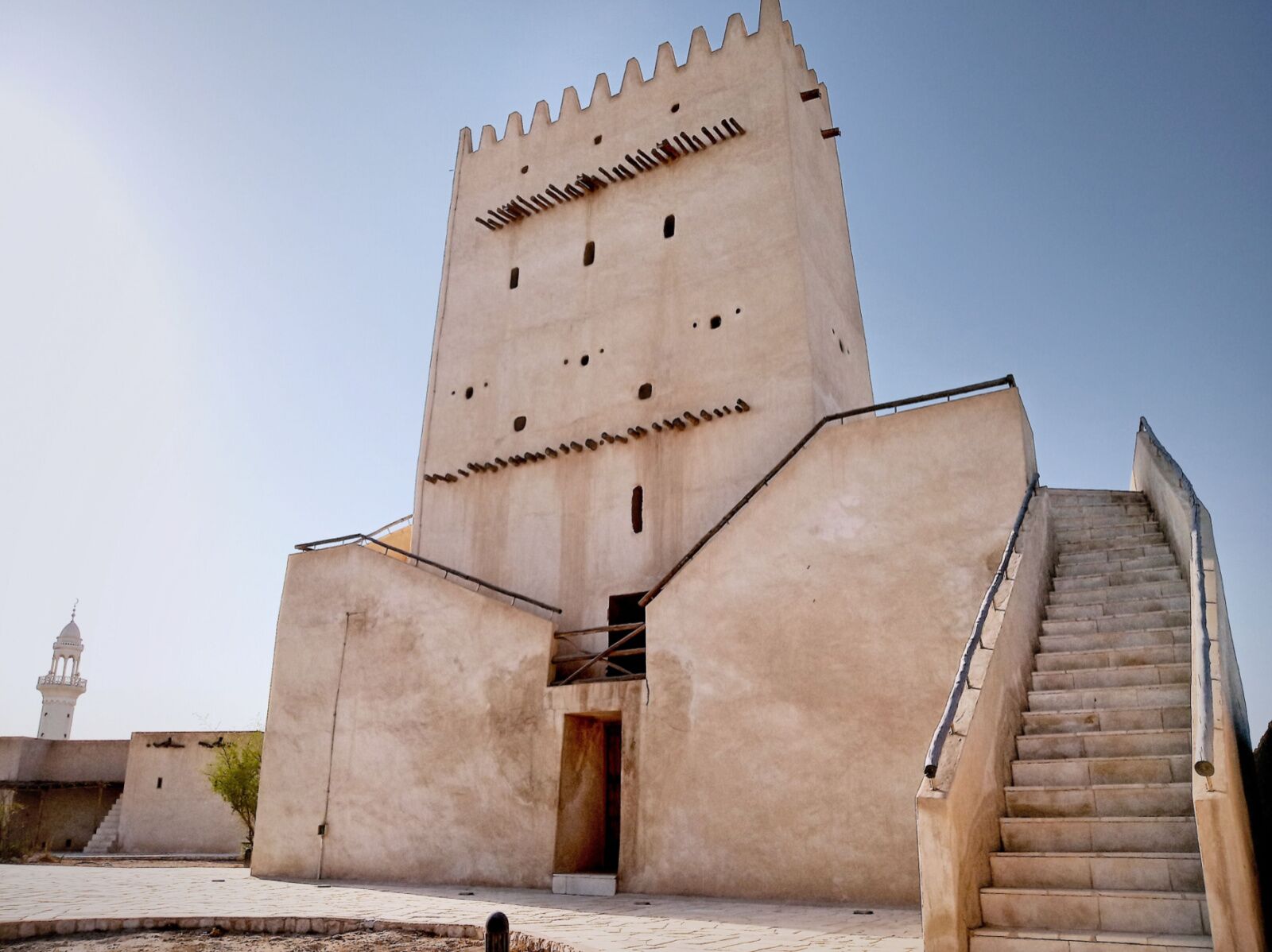 Built in the late 19th century as watchtowers, and renovated in 1910, the Barzan Towers are located about 12 miles from Doha, and were originally meant to protect the Rawdat valley. At 52 feet tall, they’re built with coral rock and limestone—a traditional Qatari design—and are arranged in the shape of a “T.” The towers now function as a museum open 24-hours to the general public, and serve as a vital educational resource for learning about the history of Qatar and the cultural importance of state monuments.

Unique experiences you should try when visiting Doha, Qatar
Tagged
Culture Lifestyle Qatar
What did you think of this story?
Meh
Good
Awesome

Notes on Temperatures in a Warzone

Unique Experiences You Should Try When Visiting Doha, Qatar

This Floating Luxury Hotel Generates Its Own Electricity

It’s so Hot in Qatar, the Country Is Installing Outdoor Air-Conditioners

How To Visit Doha, Qatar on a Budget

Why Are We Giving World Sporting Events To Russia, China, and Qatar Anyway?