Booking a trip to San Diego means a fun vacation is in store, filled with sunshine on your face, toes in the sand, and plenty of meals of margaritas and fresh fish tacos.

But knowing the best things to do in San Diego can make your trip even better. These suggestions for the best places to go, eat, and play, plus tips on packing and what to know before visiting will help make sure every moment of your San Diego vacation counts.

Tips for a San Diego vacation 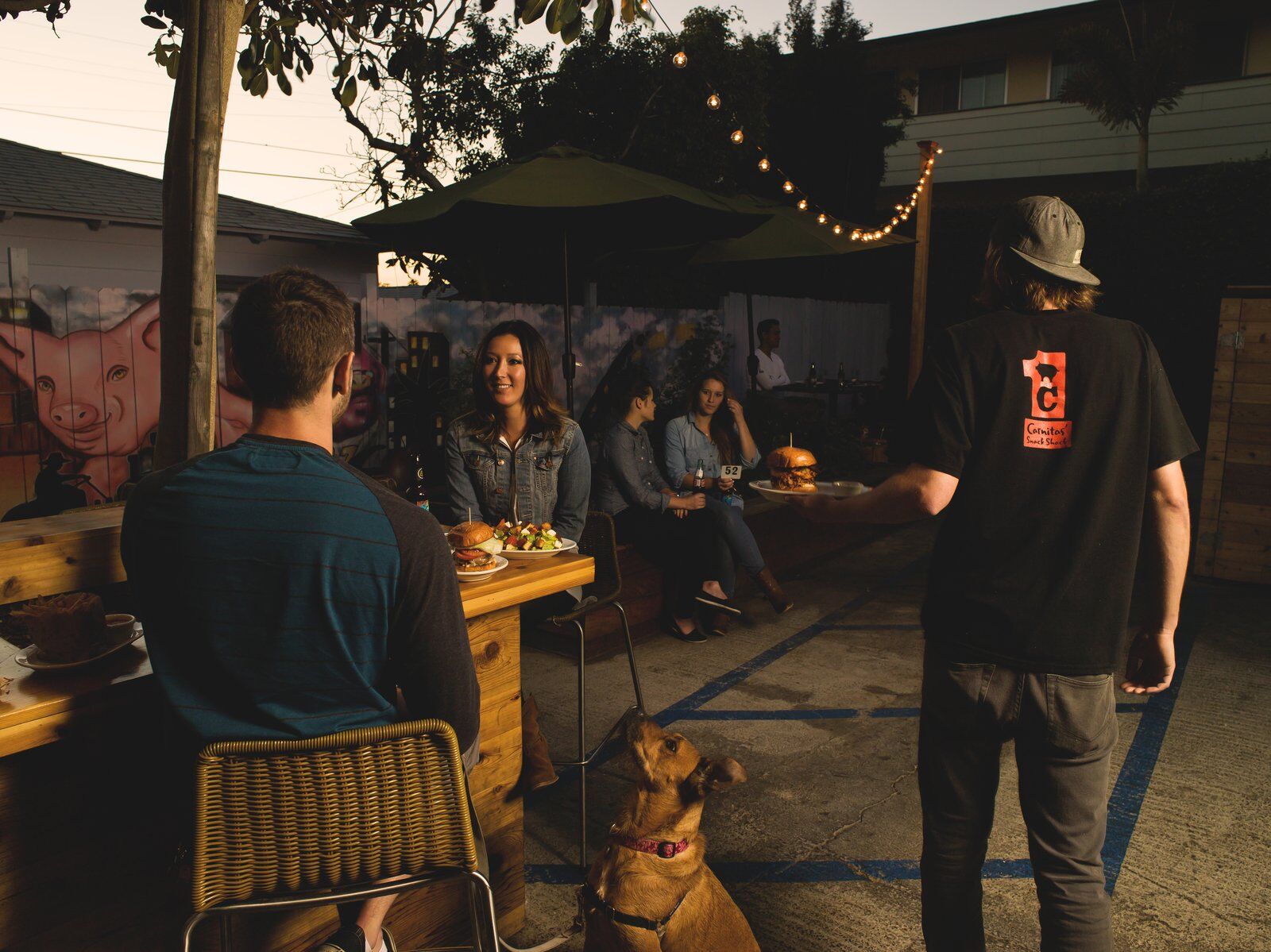 It gets colder than you’d think in San Diego, especially if you visit during “May gray” or “June gloom.” It’s not unusual to walk by outdoor cafes or breweries and see T-shirt-clad surfers shivering as they sip on the city’s award-winning brews after the sun goes down.

If you think southern California is always warm, think again. While it’s easy to find the perfect SoCal sweatshirt or windbreaker at any gift shop, it’ll save time if you just bring layers for evenings spent outdoors. A thick sweatshirt is not overkill, and you’ll probably want to have a pair of jeans handy year-round.

Finding (or escaping) the sun 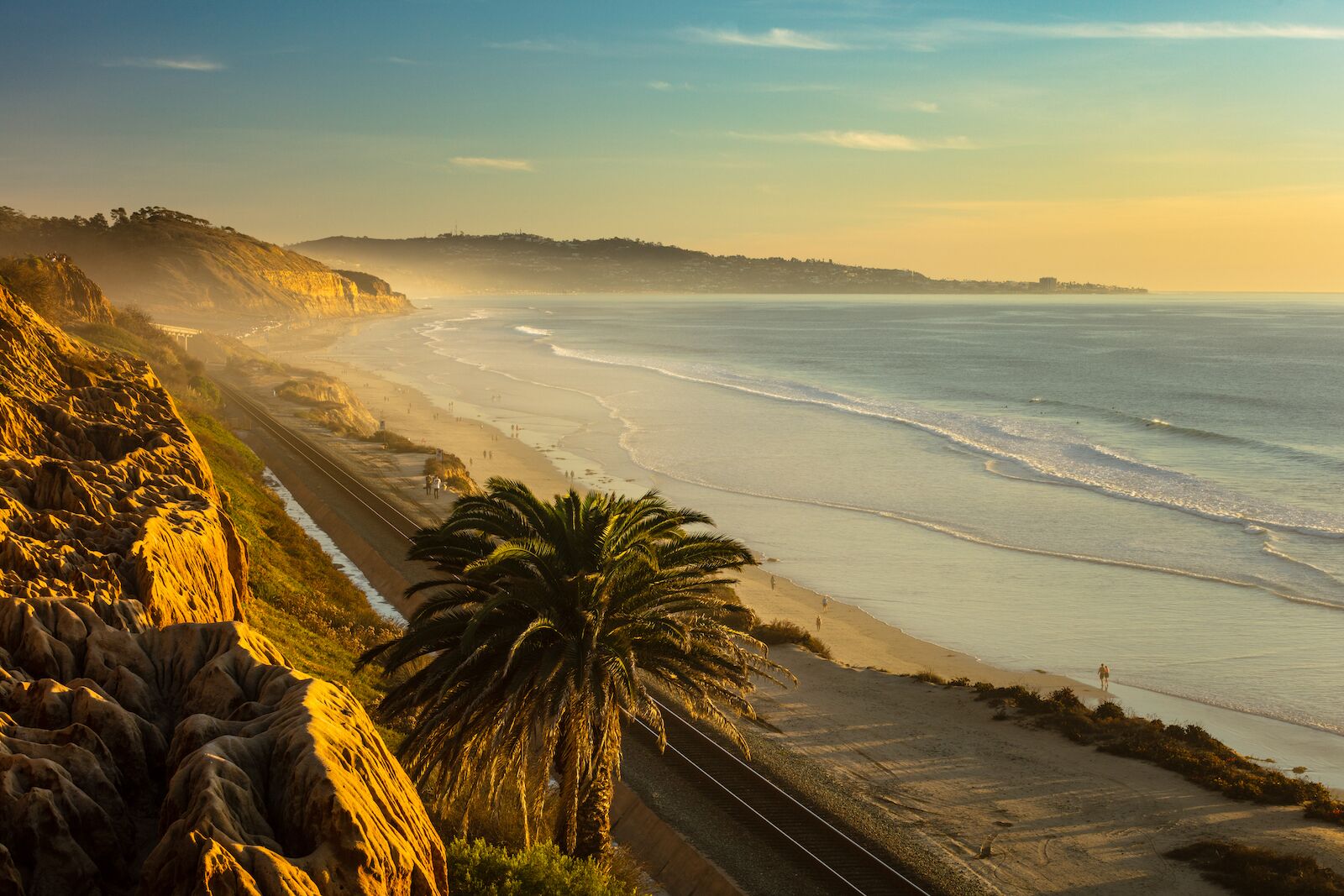 One of the best things to do in San Diego during a heat wave is to choose activities close to the beach to enjoy the ocean breezes, like coastal hikes.

If the marine layer (a low fog layer over the ocean, most common on fall and spring mornings) chills your bones, rest assured that it usually burns off by midday. Or you can just move inland: it’s not unusual to have persistent gray skies near the coast while neighborhoods just a few miles inland are 5 to 10 degrees Fahrenheit warmer. An ideal place to escape the coastal fog is Murray Reservoir, just a few miles east, to hike Cowles Mountain or take the meadow trail into Penasquitos Canyon. 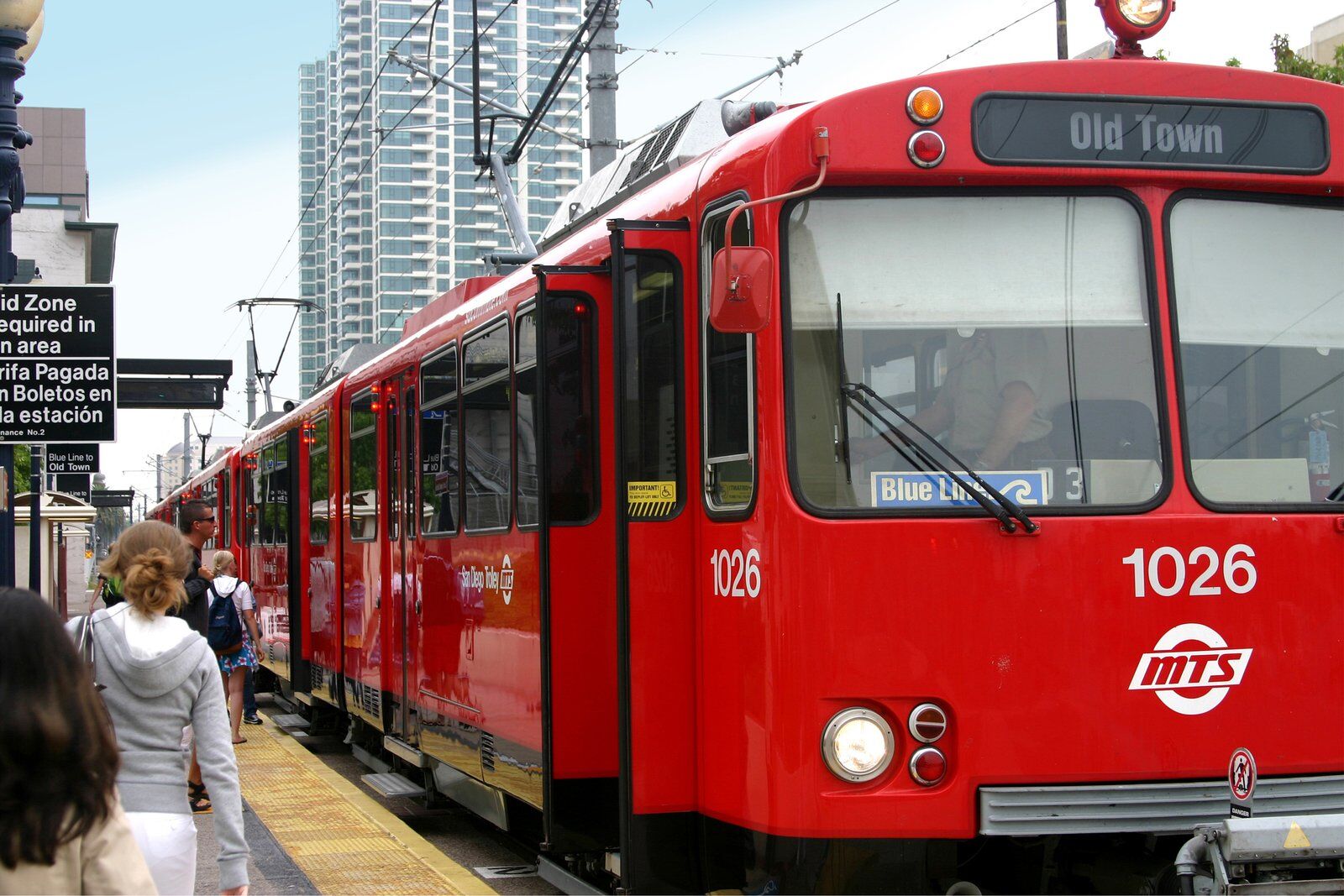 San Diego has rush hours. That’s no secret, but the surprise is how early the roads can lock up, especially when driving between Oceanside and downtown or from the beach into East Country.

Plan to get out early (by 7:30 AM or after 9 AM) if you’re going north to Legoland or the Safari Animal Park or east to hike Mission Trails Regional Park. Likewise, returning along main highways can be slow between 2:30 and 5:30 PM.

However, a good option is to travel via the San Diego trolley; the city added nine new stops in 2022. It’s a great option, especially when heading downtown, where parking can be expensive and hard to find.

The best things to do in San Diego around the beach

Spend the day at Pacific Beach 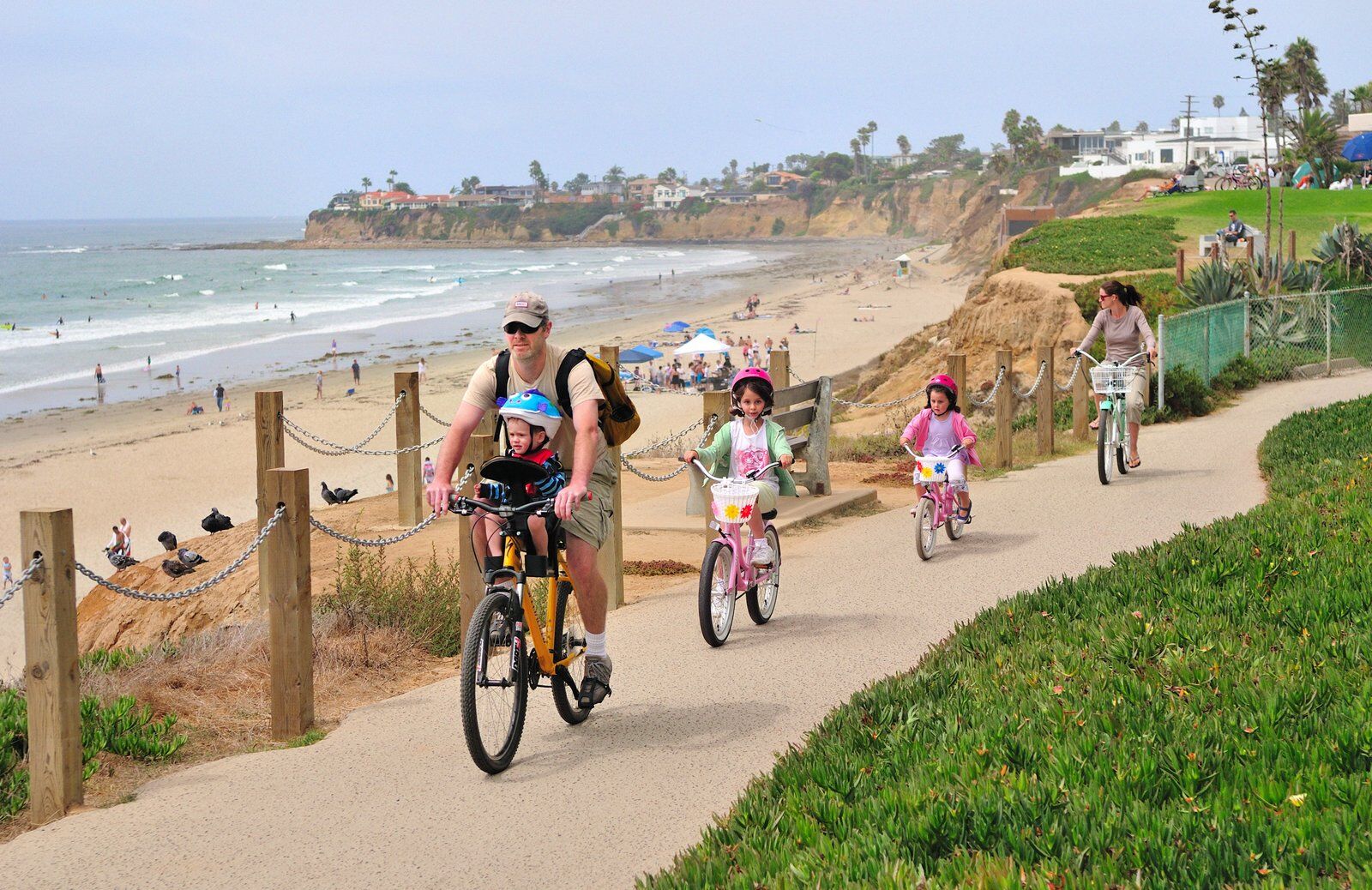 Pacific Beach overflows with beachy style and energy – and crowds. There’s a three-mile pedestrian boardwalk along the coast just steps from where waves break along the sandy strand. Visitors can watch surfers carving choice waves from the pier, walk and people-watch along the boardwalk, stop into stores that mix both modern beach style with traditional coastal garb, and even rent a bike or scooter. But whatever you do, expect to jockey for space, especially on weekends.

These two adjacent and popular beach areas have very different personalities. The Cove is a tiny curve of swimmable beach accessed via a short stairway from the parking area. Walk south to admire the antics of seals lounging near the Children’s Pool or stroll north where sea lions commandeer the rocky bluffs. There’s great birdwatching, too, as scores of cormorants and pelicans nest along the cliffs.

La Jolla Shores is a short drive north. Take to the sand, snorkel with docile (and usually sleeping) leopard sharks off the beach in front of the Marine Room Restaurant, or sign up for kayak tours in the village. Don’t miss taking pictures under Scripps Pier, especially during golden hour. 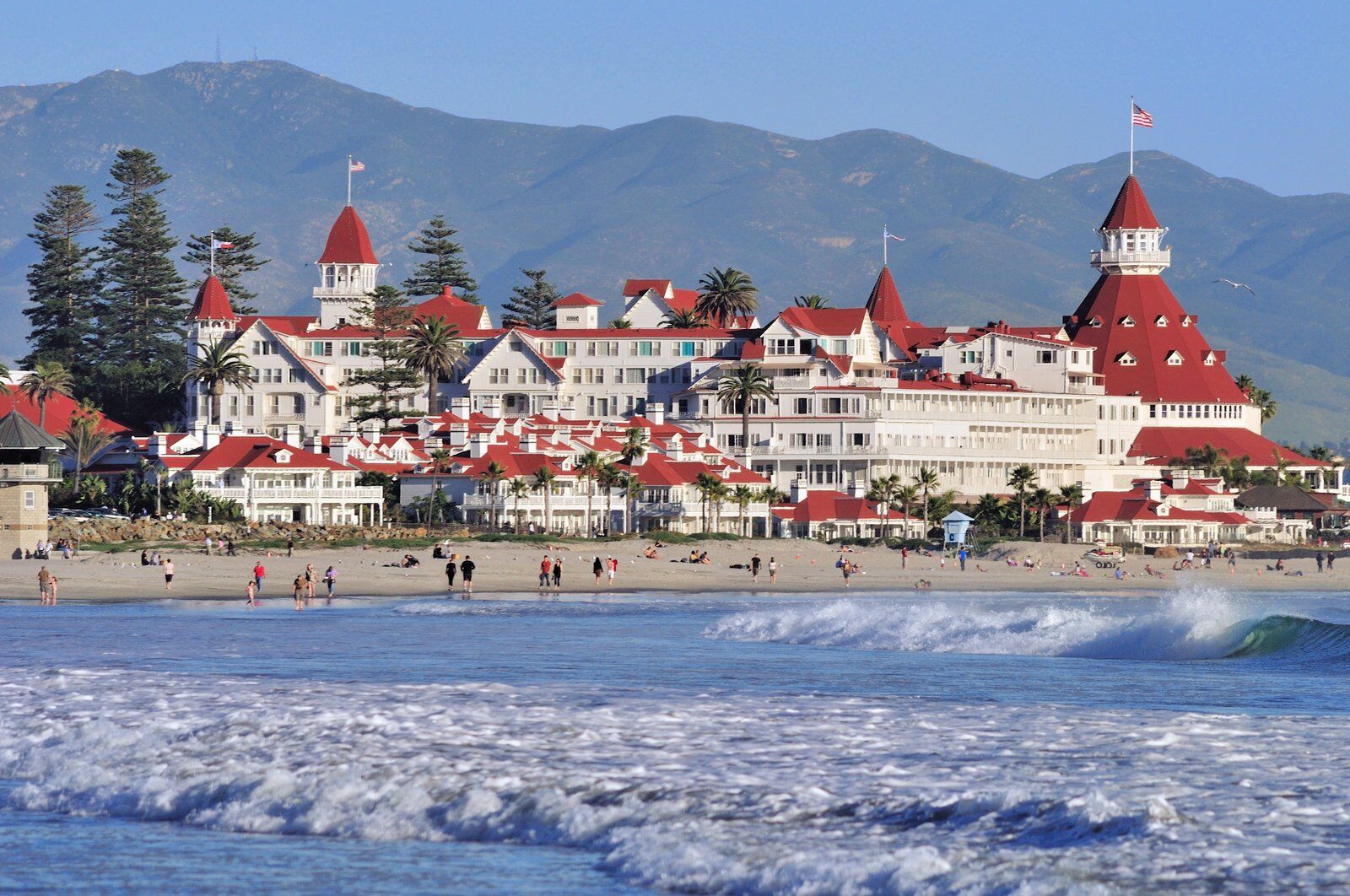 Colorado Island is reachable by car via the sweeping Coronado Bridge, which offers beautiful harbor views before dipping down to Orange Avenue. The historic lane runs parallel to the island’s long beach made famous by numerous films, from 1959’s Some Like it Hot to 2022’s Top Gun: Maverick.

One of the best things to do in San Diego for an afternoon is to spend a few hours playing in the water and dunes or cycling along the 24-mile Bayshore Bikeway, then grabbing a snack or drink in the quaint village at restaurants like Brigantine Seafood & Oyster Bar or the historic Coronado Hotel’s Serea Coastal Cuisine.

Other outdoor things to do in San Diego

Spend a day at Balboa Park 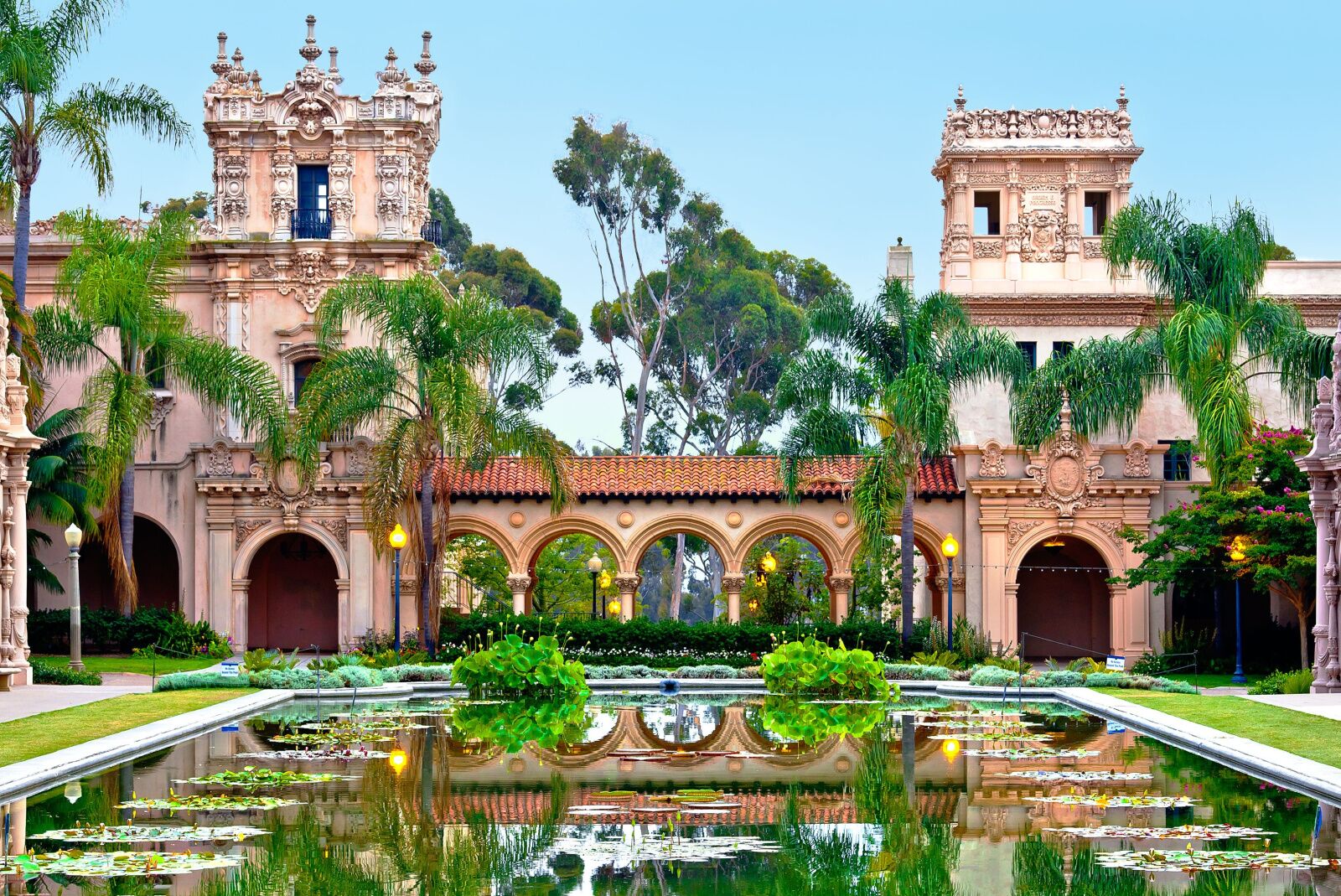 Balboa Park is packed with so many things to enjoy that you could spend several days there, especially if you see a show at the historic Balboa Theatre.

Balboa Park is nearly two square miles and has 17 “museums and cultural institutions,” including the Museum of Us, a unique anthropology museum. The park also has great trails and picnic spots, especially in the Marcy Sculpture Garden and Japanese Friendship Garden, which also has a traditional tea house.

Adults may want to claim a bench and enjoy a free concert at the Organ Pavilion, while families will likely want to stop by The San Diego Zoo. It’s one of the biggest in the world and recently welcomed a baby white rhino, Neville, in the fall of 2022. Hop a ride on the aerial tram on your way out to save yourself a long walk back through the park. 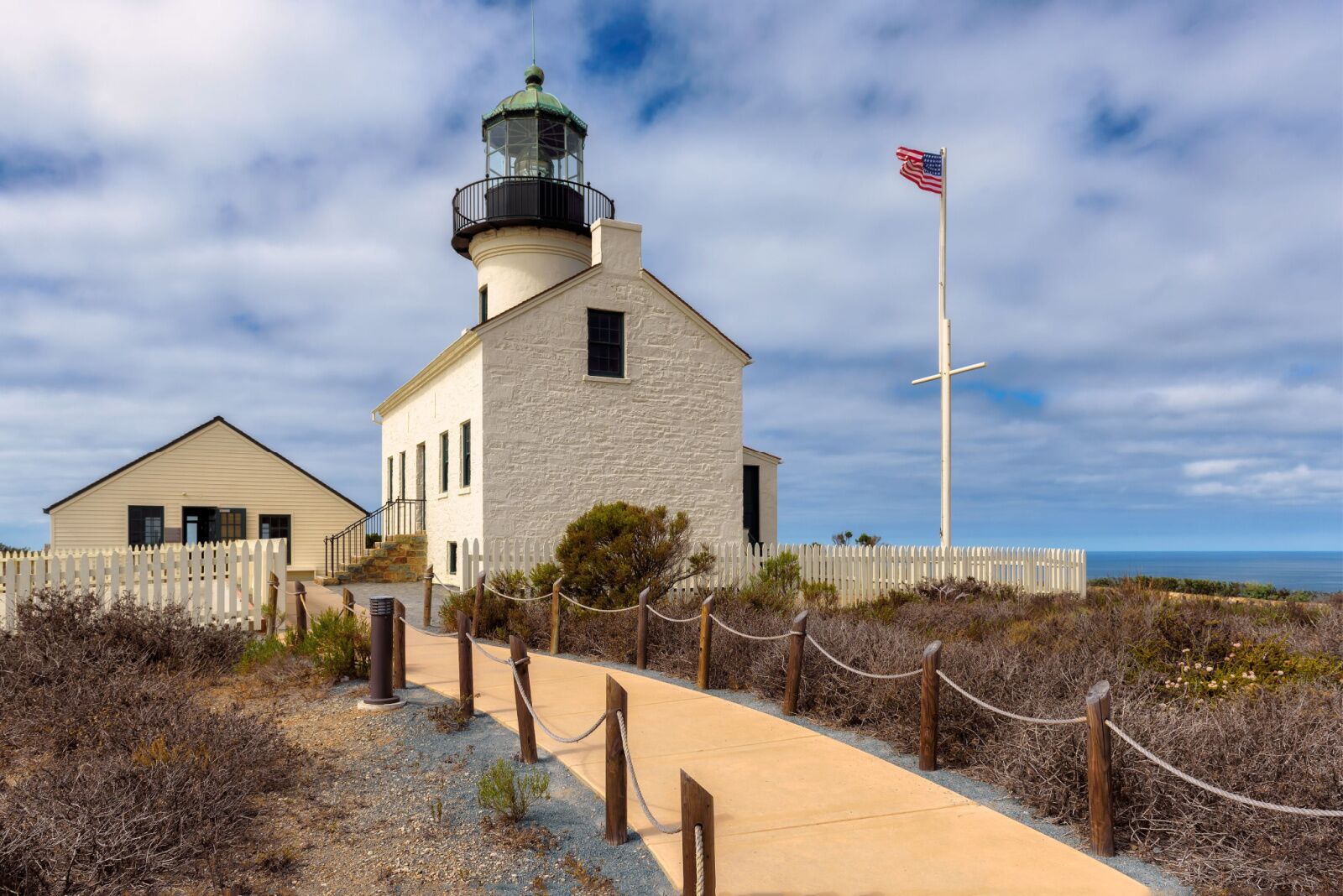 This state park covers the highest and southernmost tip of the Point Loma Peninsula. One of the best things to do in San Diego is to walk through the old lighthouse (once one of the most remote in the country), visit the museum commemorating the 1542 landing of Juan Rodriguez Cabrillo, and admire the views west to the Coronado Islands and, eventually, the Tijuana hillsides.

The newer lighthouse sits above the rocks on the western side of the point. While that’s not open to the public, visitors can claim one of the few nearby parking spots and walk along the Coastal Trail to reach the side pools on the park’s western shore.

Wander through the Gaslamp District 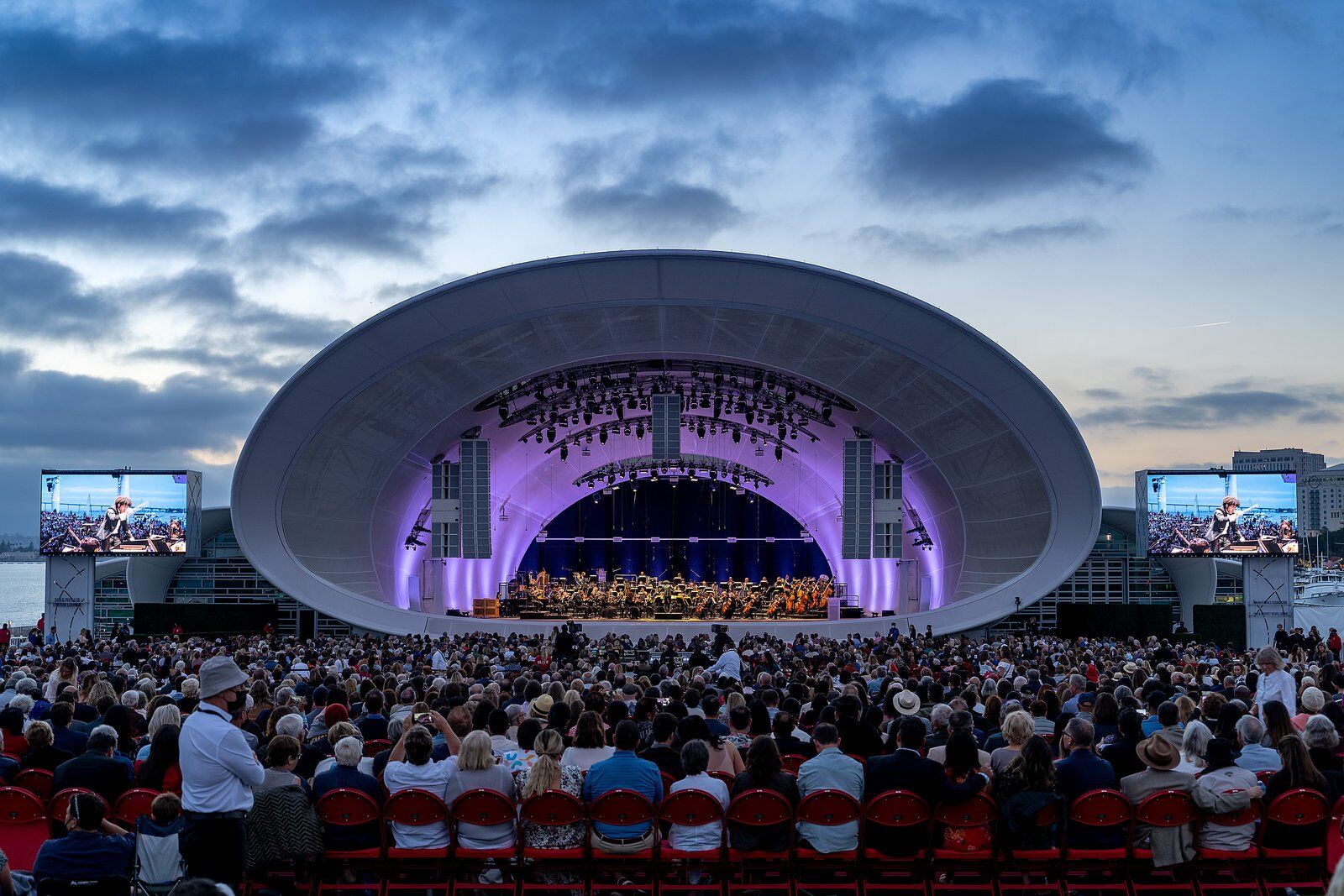 In general, the whole Gaslamp area is the spot for a more urban experience in San Diego, whether that means catching a concert in the outdoor amphitheater of Jacob Park (often referred to as the “Symphony Shell”), bar hopping along Fifth Avenue, or trying your luck at getting a table at one of many award-winning restaurants.

Culture, Art, and Museum things to do 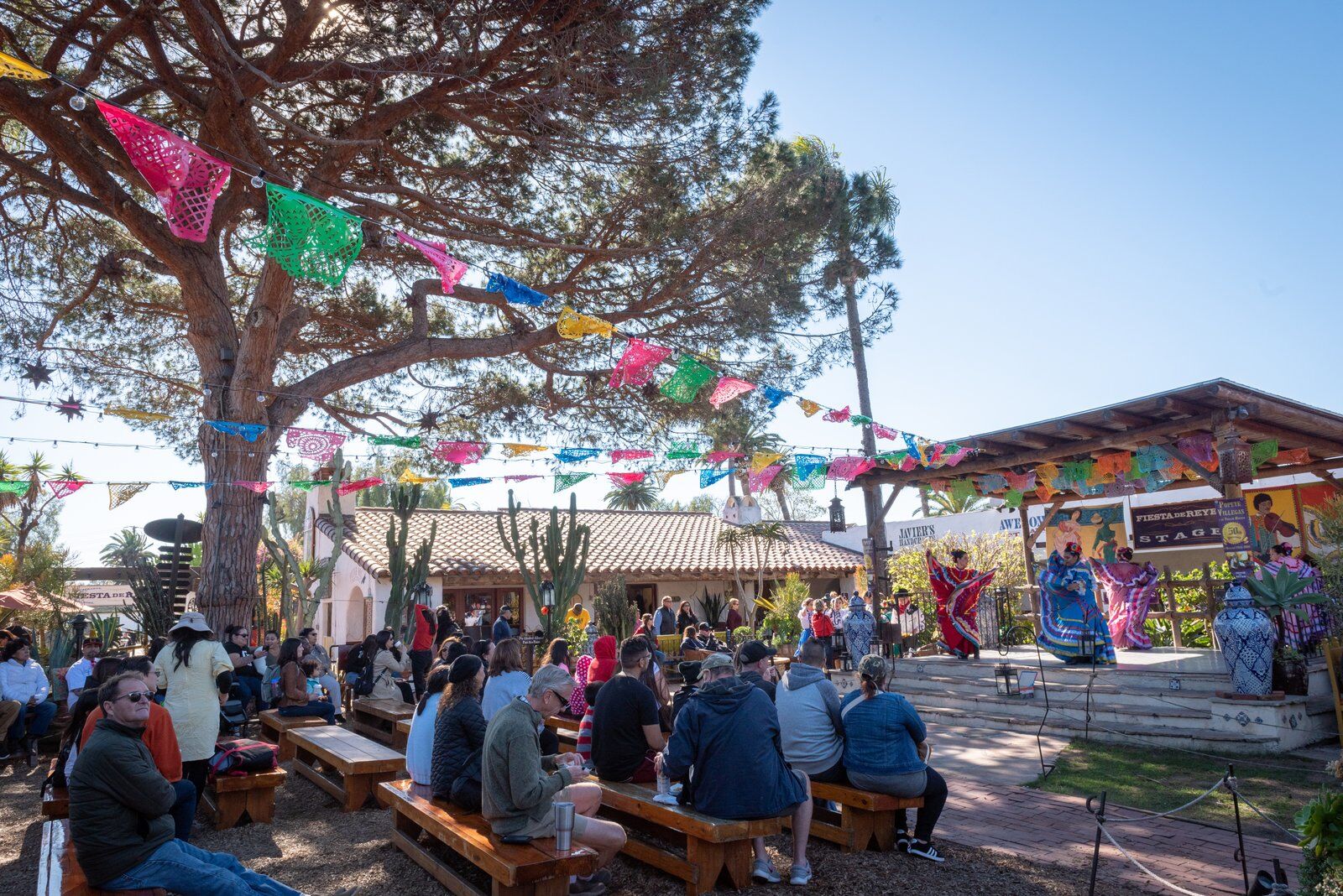 Being a border town has seeded San Diego with rich art and architecture. The Old Town historic district is an open-air park and home to the historic (and supposedly haunted) Cosmopolitan Hotel, more than 20 restaurants serving Mexican and Latin American cuisine, unique shops, and historic sites like the Whaley House. There are also free historical talks and walking tours offered on Thursdays and Fridays. And around the corner are the Bazaar del Mundo and Old Town Market; the latter is home to the colorful (and highly rated) Casa Guadalajara Restaurant. 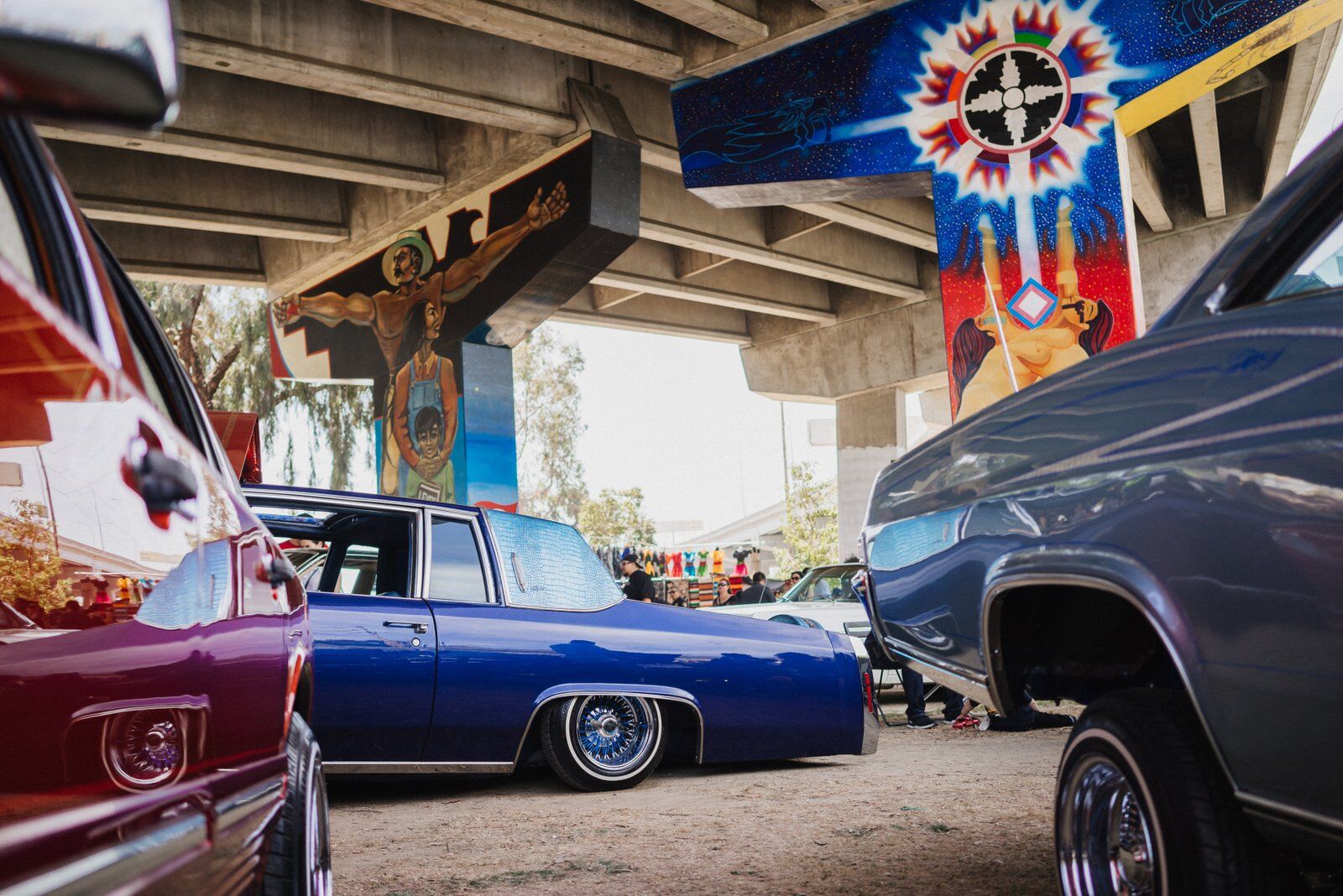 A bit further south (and now a national landmark), Chicano Park flourishes between the pillars of the Coronado Bridge in Barrio Logan. Monumental murals adorn the bridge stanchions; in fact, the area (known collectively as Chicano Park and Cultural Center) is home to the world’s largest collection of Chicano murals (around 80). It just opened to the public and is one of the most exciting new developments in the city. It’s a great place to make an afternoon of it, strolling past the galleries and shops along Logan Avenue. 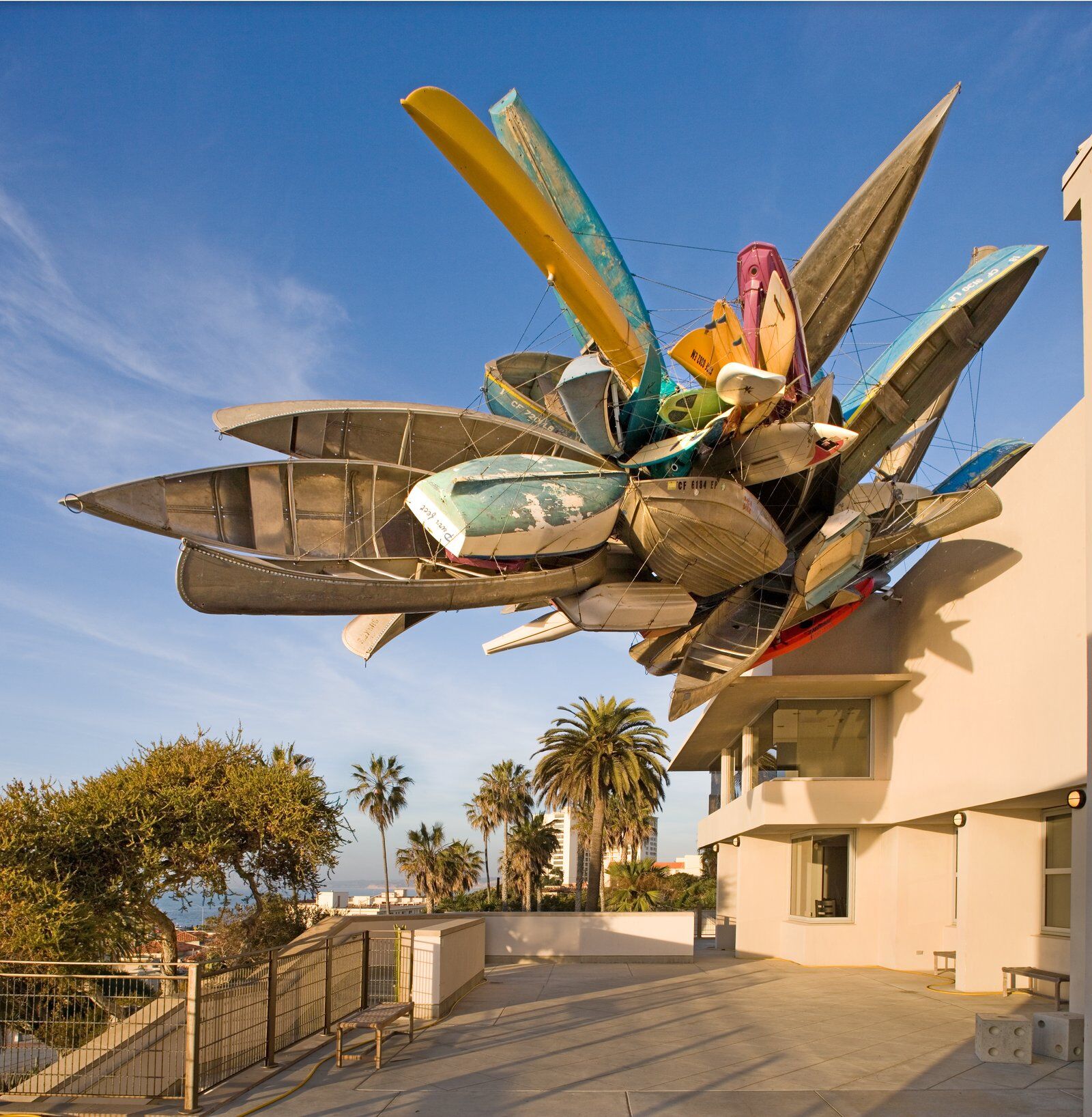 Glance up from the La Jolla Children’s Pool and you’ll notice a jumble of steel rowboats, canoes, and surfboards jutting out from the angular Museum of Contemporary Art. It’s a famous installation by artist Nancy Rubins and gives a taste of what visitors will find in the museum’s interior galleries, which hold other site-specific works.

Gallery-hopping is one of the best things to do in San Diego for travelers who like creative arts, and the La Jolla MCASD isn’t the only place (though it was recently expanded, so plan a bit of extra time). There’s a second satellite gallery near the USS Midway in downtown San Diego, next to the Santa Fe Railroad Station.

The Maritime Museum and Midway Museum 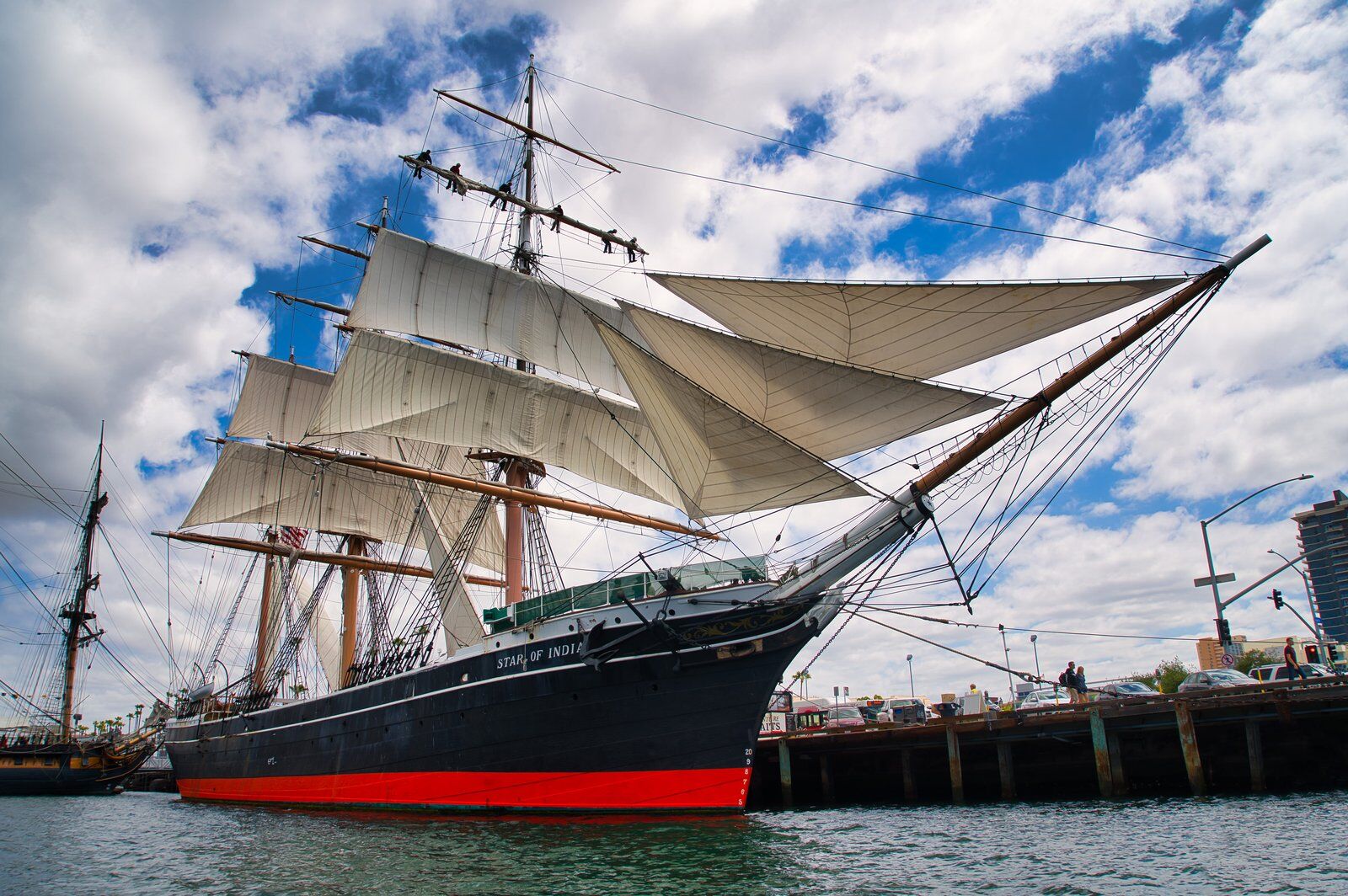 Sailing is part of what put San Diego on the map and the city proudly keeps the tradition alive. Today, visitors can step aboard the ‘world’s oldest active sailing ship:’ The Star of India. The double-masted ship is part of the San Diego Maritime Museum, where visitors can also wander through a ferry boat and submarine.

A few feet away is the massive USS Midway Museum, where the eponymous USS Midway aircraft carrier towers over the waterfront. Visitors can ride flight simulators inside the cavernous ship, sit in on historical films, or walk the “chow line” through the ship’s galley. There are also plenty of other exhibits, memorabilia, and equipment commemorating military accomplishments. 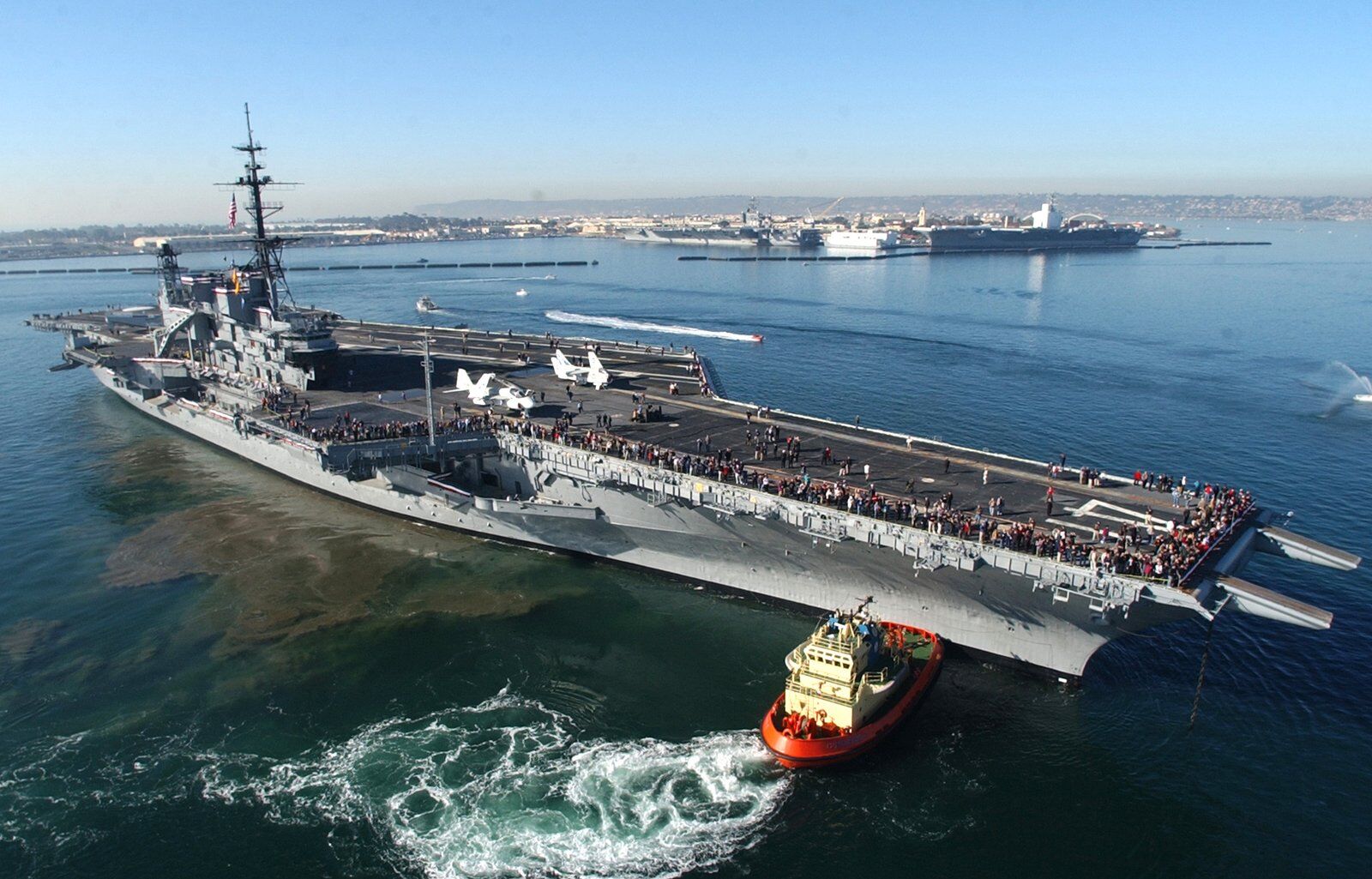 Visiting the USS Midway Museum and the Star of India are some of the most popular things to do in San Diego, so it’s best to buy tickets online in advance if possible.

Top food and drink things to do in San Diego 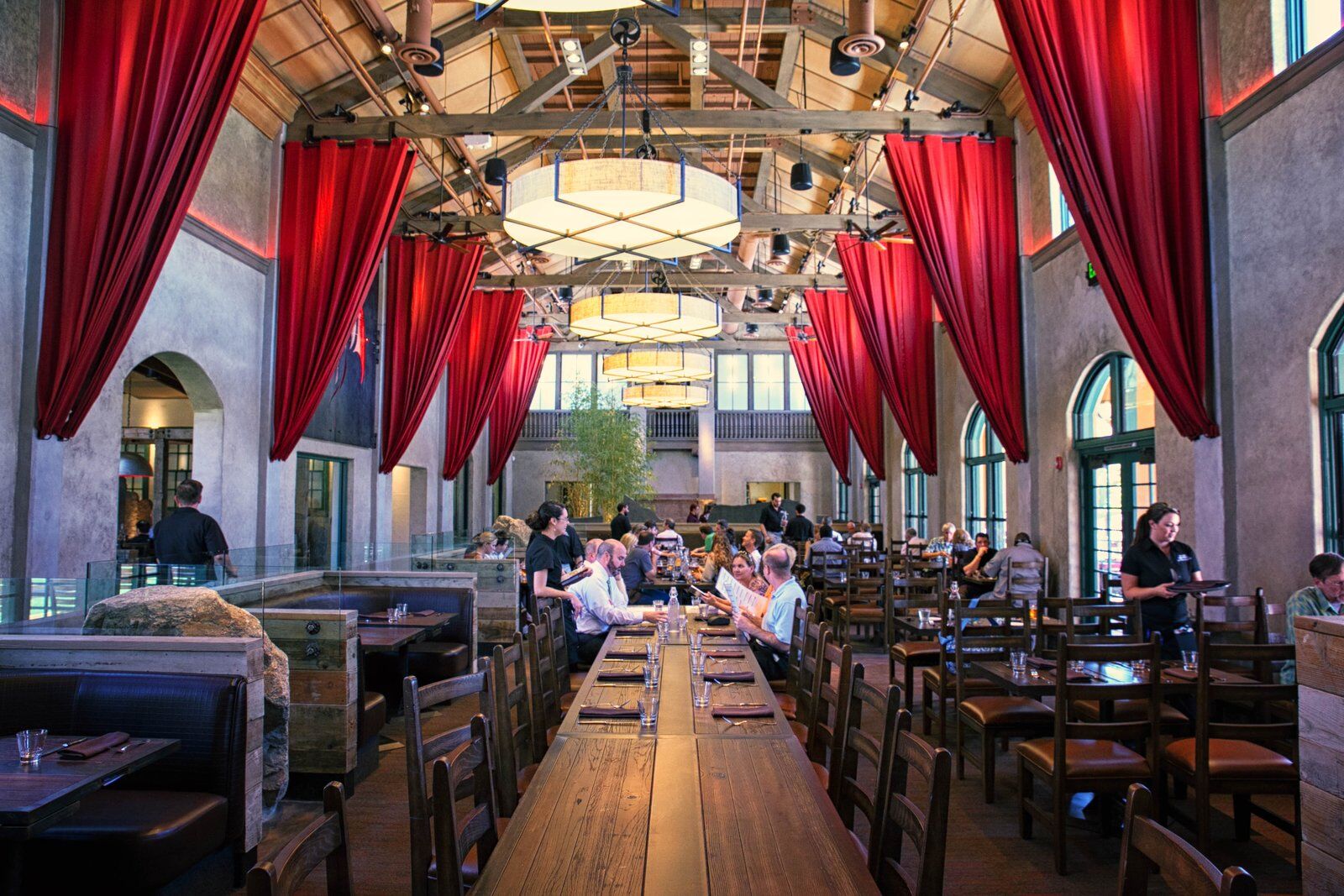 The San Diego beer scene is constantly reinventing itself, but a few locations consistently have the most popular brews available. Top spots to imbibe include the courtyard or beer hall at Stone Brewery in the city’s Liberty Station development, Coronado Brewery (on Coronado Island), and the Miramar neighborhood in North Country, home to breweries like Alesmith and Duckfoot. In fact, it’s home to more than a dozen breweries and is called “Beeramar” by locals. 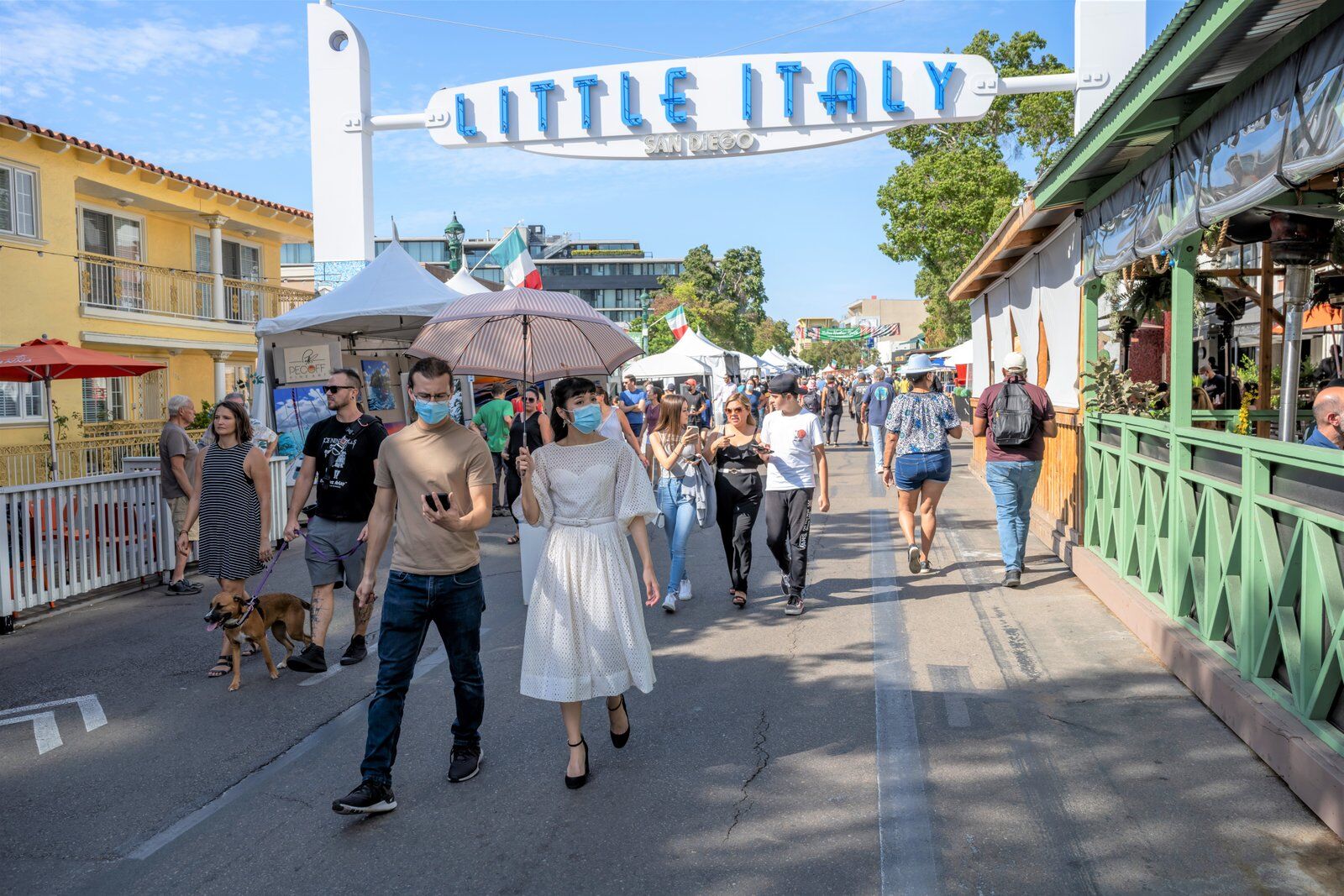 Little Italy has managed to hold onto its historic character while still bringing in new energy. Diners can choose from traditional fare, like the southern Italian options at Cico 1845, or opt for something more cutting edge, such as the fresh, seafood-heavy dishes at Ironside.

Fortunately, visitors who can’t make up their minds don’t need to, thanks to the Little Italy Food Hall inside at the Piazza della Famiglia, which has a food hall with stations ranging from donuts to lobster to pizza, naturally. On Wednesday and Saturday mornings, this area hosts the city’s largest farmer’s market, Mercato. Parking can get tricky. 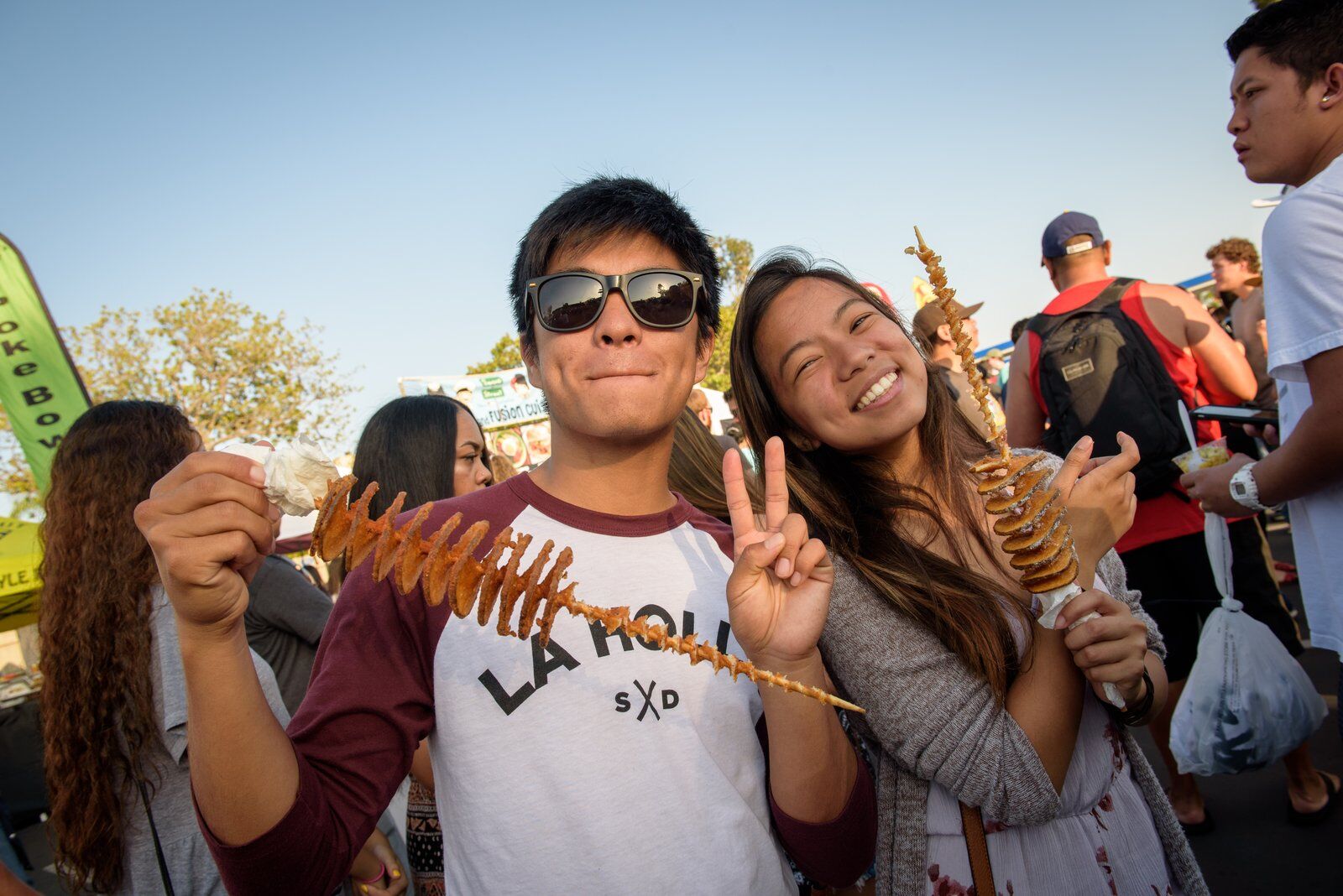 The Convoy District, north of downtown, is packed with dozens of traditional and trendy-without-being-pretentious Pan-Asian dining options. Shanghai Saloon is one of the largest and is noted for Chinese dumplings, while Shabu Shabu House is a simple but bustling hot-pot dinner spot. For dessert, swing by Somi Somi, serving Korean ah-boong: a fish-shaped waffle cone filled with pudding and soft-serve ice cream. 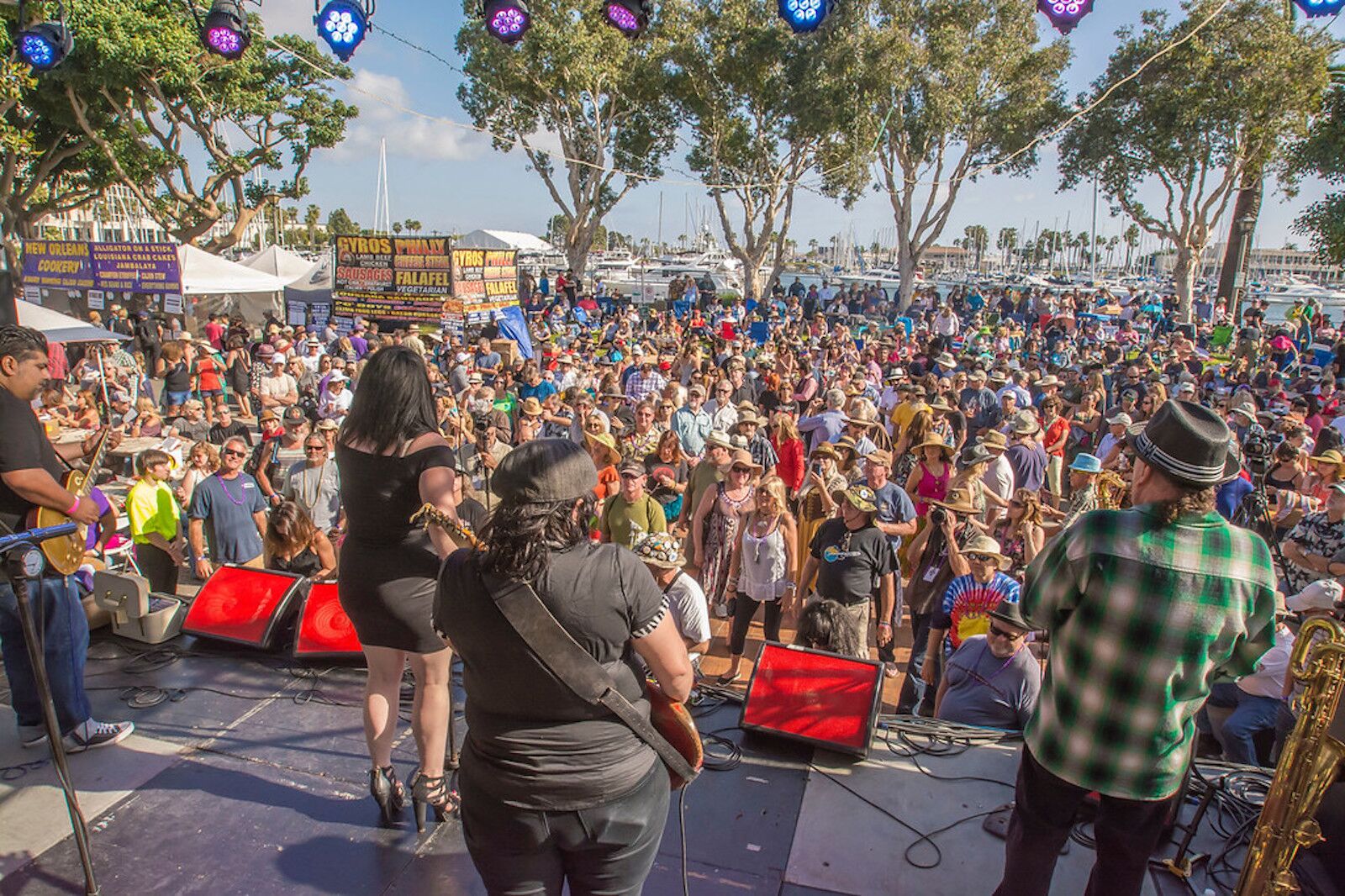 Epic StaysThese Beautiful San Diego Airbnbs Put You Close To the Beach and Downtown
Tagged
Insider Guides
What did you think of this story?
Meh
Good
Awesome

5 Great Spots To Eat and Drink at in San Diego