La Paz, Mexico, is fewer than 100 miles north of vacation hotspot Cabo San Lucas, but the two cities might as well be light-years apart. Though La Paz is the capital of Baja California Sur, Cabo has long been the state’s go-to vacation destination — and it shows.

Free from Cabo’s resort sprawl and never-ending nightlife, La Paz is a reminder of what Mexico’s beach towns can be like before tourism reaches critical mass. Its growing popularity is slowly ushering in boutique hotels and hip eateries, but the city is still clinging to a particular type of traveler — one that wants to spend the majority of his or her time outside.

All of the most thrilling things to do in La Paz revolve around outdoor activities, including laid-back options like boating and beaching and more active adventures like scuba diving, windsurfing, and sandboarding. If those are the type of experiences that fuel your love of travel, here are eight reasons you should choose La Paz over Cabo next time you’re in Baja California Sur.

Scuba dive or snorkel in the “world’s aquarium” 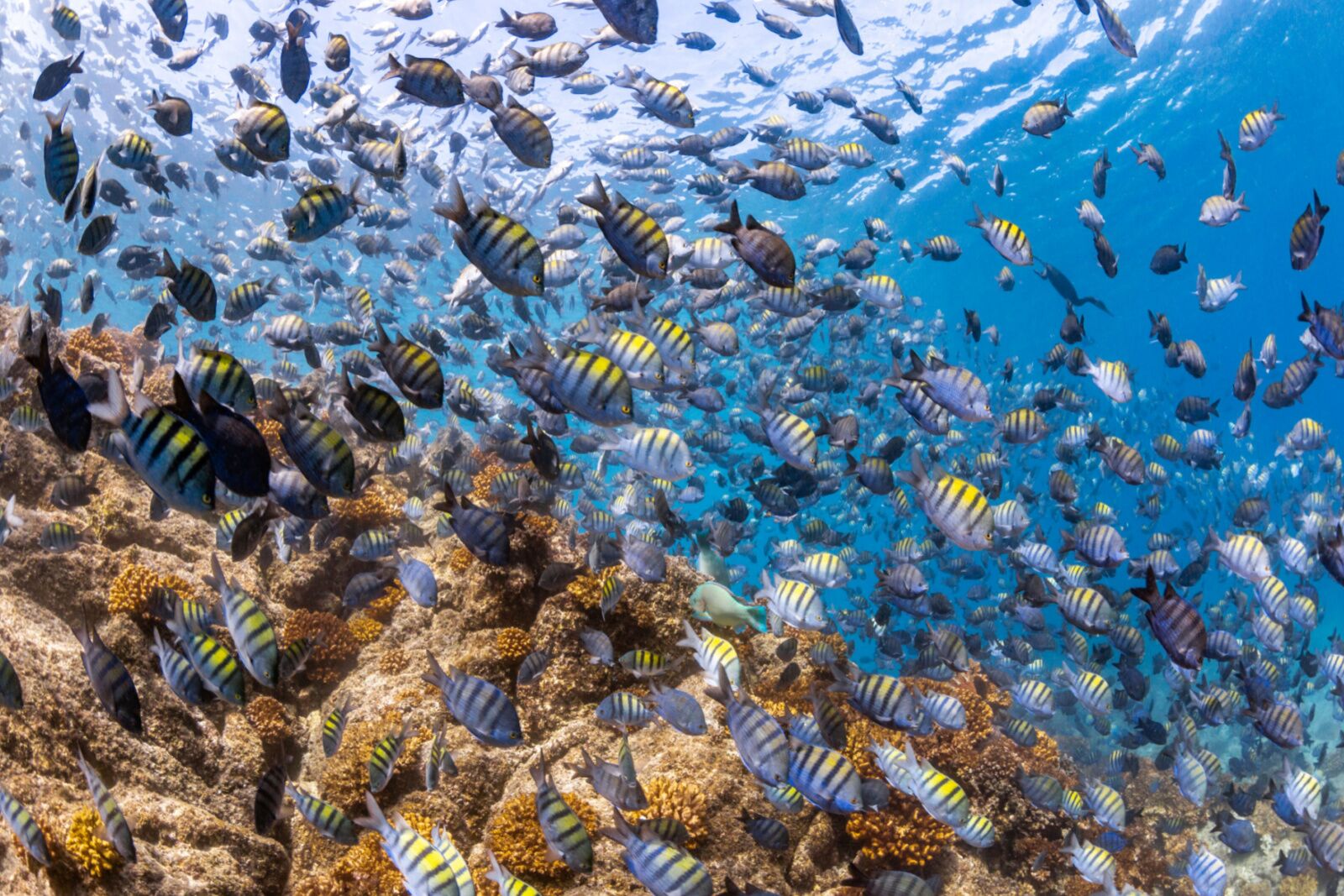 La Paz sits on some premium real estate on the Gulf of California (a skinny inlet separating the Baja Peninsula’s east coast from the rest of Mexico’s west coast). Also known as the Sea of Cortez, the gulf is one of the most biodiverse water bodies on Earth. Nearly 40 percent of the world’s marine mammal species and almost 1,000 different fish species live in the waters just offshore of La Paz. The sea life is so rich — think dolphins, whales, sharks, rays, and turtles, to start — that Jacques Cousteau once dubbed it the “world’s aquarium.”

There are plenty of reputable dive shops in the La Paz area. But you don’t have to miss out if you’re not certified — snorkeling is also one of the best things to do in La Paz, Mexico, especially since the water tends to have an average visibility of around 90 feet (which means it’s very clear). You can also do an easy “Discover Scuba” dive with most shops, even if you’re never tried it before.

Stroll along the most beautiful malecón in Mexico 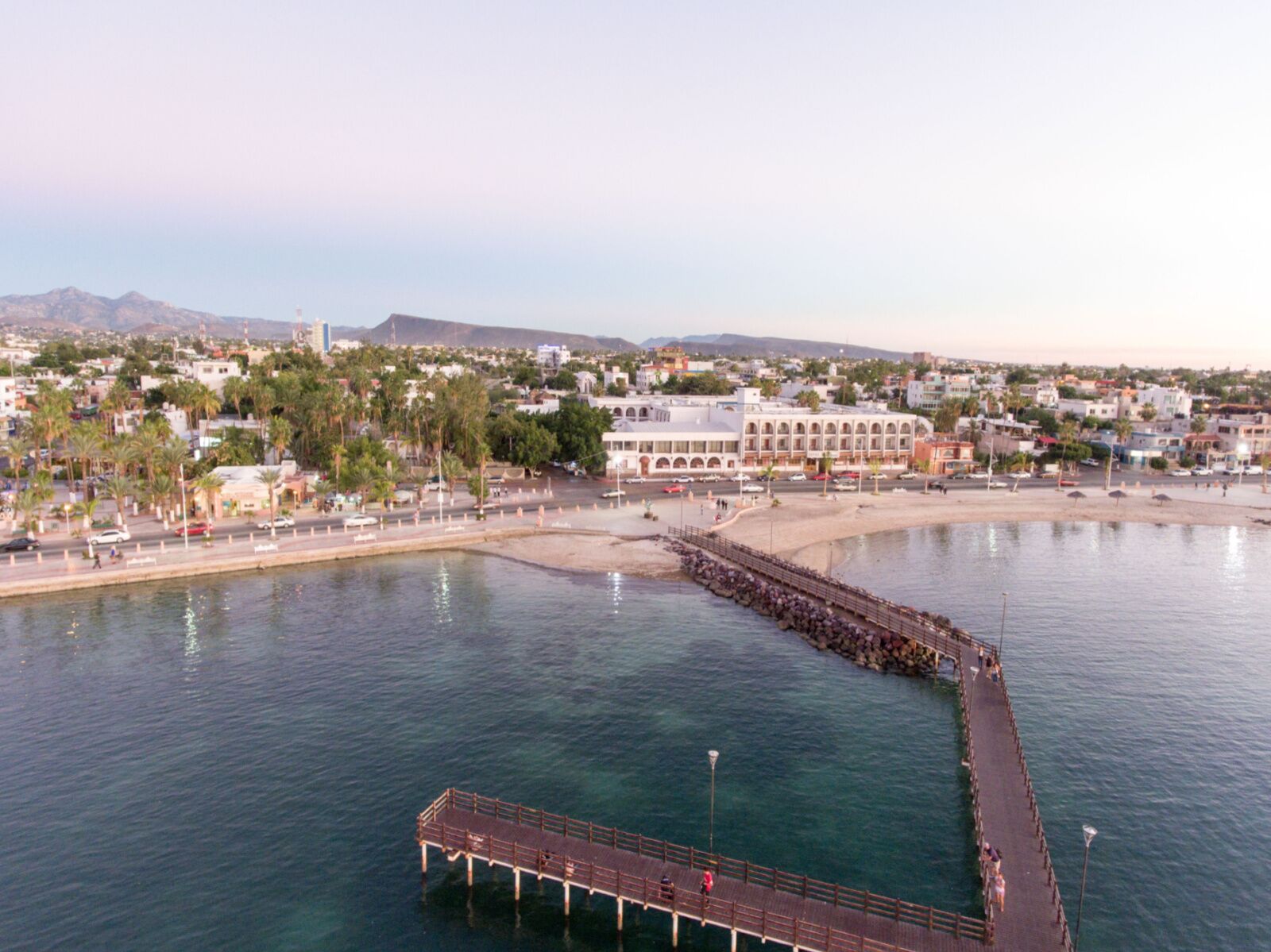 The only thing separating downtown La Paz from all that marine biodiversity is a three-mile malecón, akin to a boardwalk. Locals insist it’s the most beautiful esplanade in Mexico, and they make a good case.

Sculptures honoring the region’s ecological and cultural heritage, including one of ocean explorer Jacques Cousteau, appear every hundred yards or so. Palm trees crop up every few feet, and a string of thatched-roof palapas provides shade for beachgoers. There’s also a bike path, skateboard park, and volleyball courts, all of which are popular well into the evening.

While most things to do in La Paz are heavy on adventure, walking the malecón at sunset is a peaceful alternative and a great way to end an active day. It’s also the best way to acquainted with the city and its scenery (and an ideal place to launch a paddleboard).

You can sleep under the stars on an uninhabited desert island 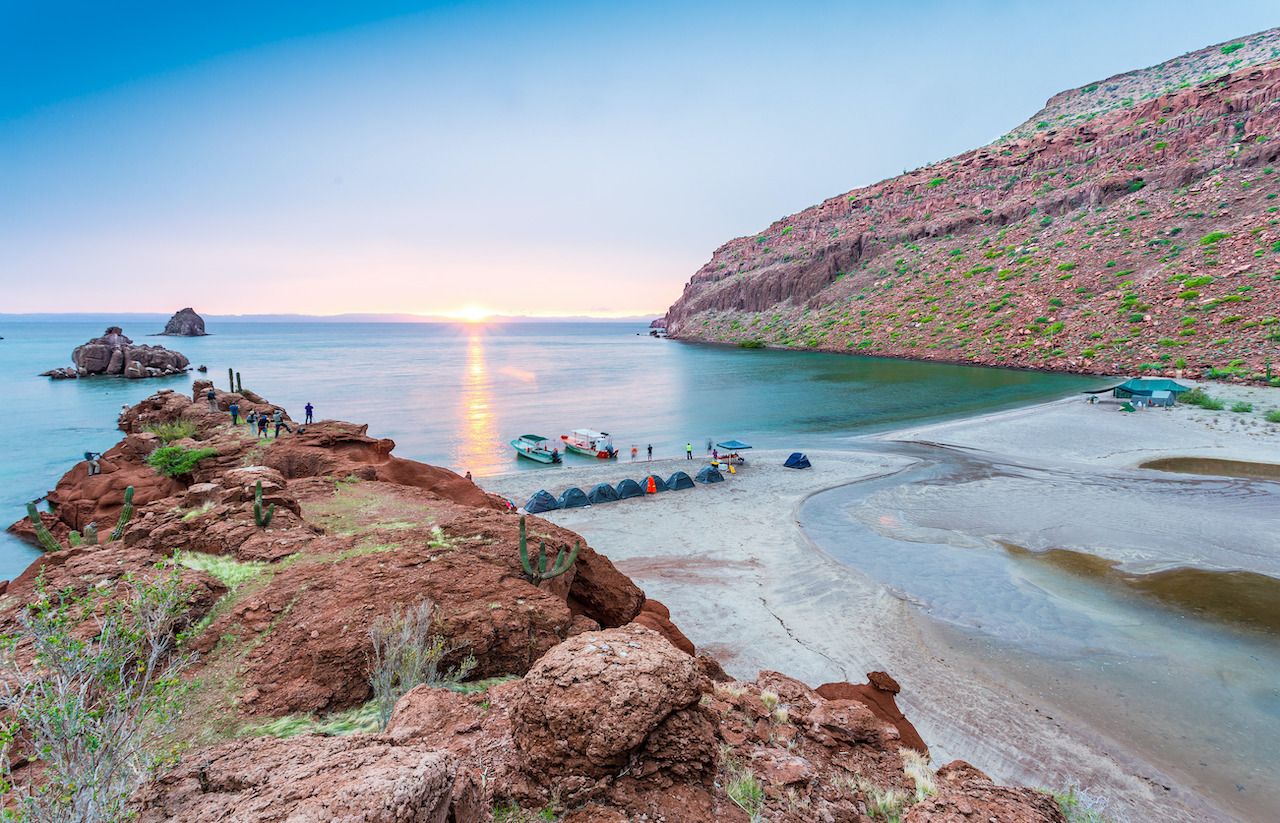 Of all the memorable things to do in La Paz, experiencing Isla Espiritu Santo might be the most indelible. A national park and UNESCO World Heritage Site, the lava-and-limestone island reaches into the Sea of Cortez with fingerlike formations webbed together by small pearl-white beaches. The surrounding water is so clear that you’ll hardly notice it’s there — until you dive in and feel its bathtub-warm touch against your bare skin. In a word, Espiritu Santo is magic.

Thirty-two reptile species and 98 bird species, including the elusive blue-footed booby, inhabit the island alongside desert flora like giant cardon cactuses. The last humans to live there were the indigenous Pericu people, who called it home some 10,000 years ago. But today, travelers can sleep there. Select tour operators, such as Baja Expeditions, manage glampsites on the beach, though you can also visit for just a few hours.

Because Espiritu Santo is a protected area, only authorized boats can access its shores. Several operators run day trips to the island from La Paz’s marinas and the pier off the malecón. BACO (Baja Adventure Company) is a good choice for a half-day visit, complete with an hour-long boat ride, paddleboarding off Espiritu Santo, an on-board lunch of ceviche and tacos from a local La Paz restaurant, and a snorkeling excursion at Los Islotes (more on that below).

In total, there are 11 reef and wreck sites open to snorkelers and scuba divers within Espiritu Santo National Park, which includes the archipelago’s namesake island, as well as neighboring Isla Partida and a handful of smaller islets and promontories in the Sea of Cortez. 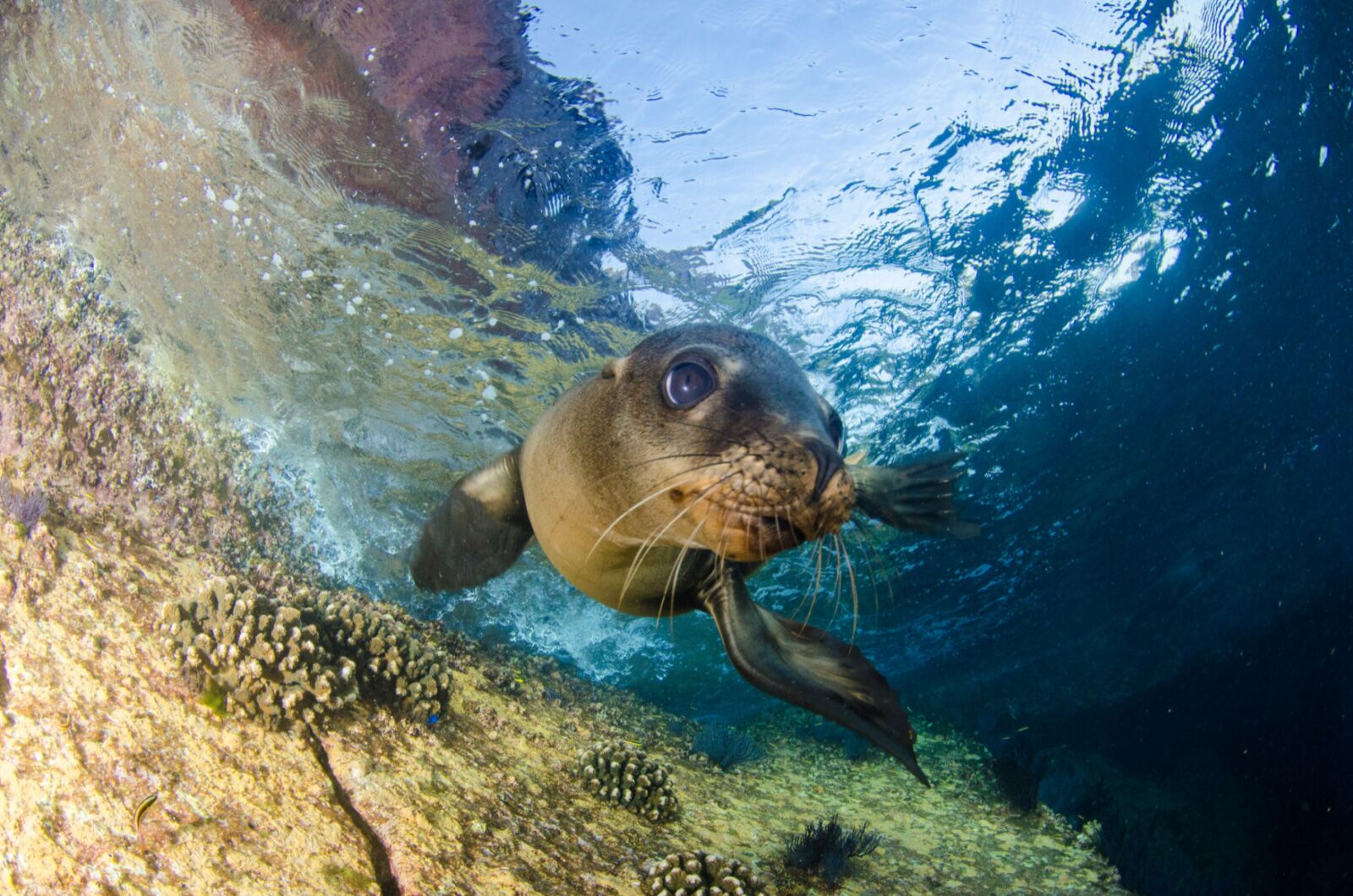 If you’re going to choose just one snorkel or scuba excursion around Espiritu Santo, choose Los Islotes, a miniature island just north of Isla Partida. In fairness, Los Islotes is more of a rock than an island, and almost every inch of its surface is covered with sea lions.

When they’re not sunbathing, the sea lions of Los Islotes circle the shallow reef that rings the island — as do many tourists who come to see the colony. Swimmers are instructed to keep a close yet safe distance from the sea lions, but the animals follow no such rules. Occasionally, some may approach closely enough to visitors that they can count their cute little whiskers.

Relax on a pristine beach capped at 200 visitors 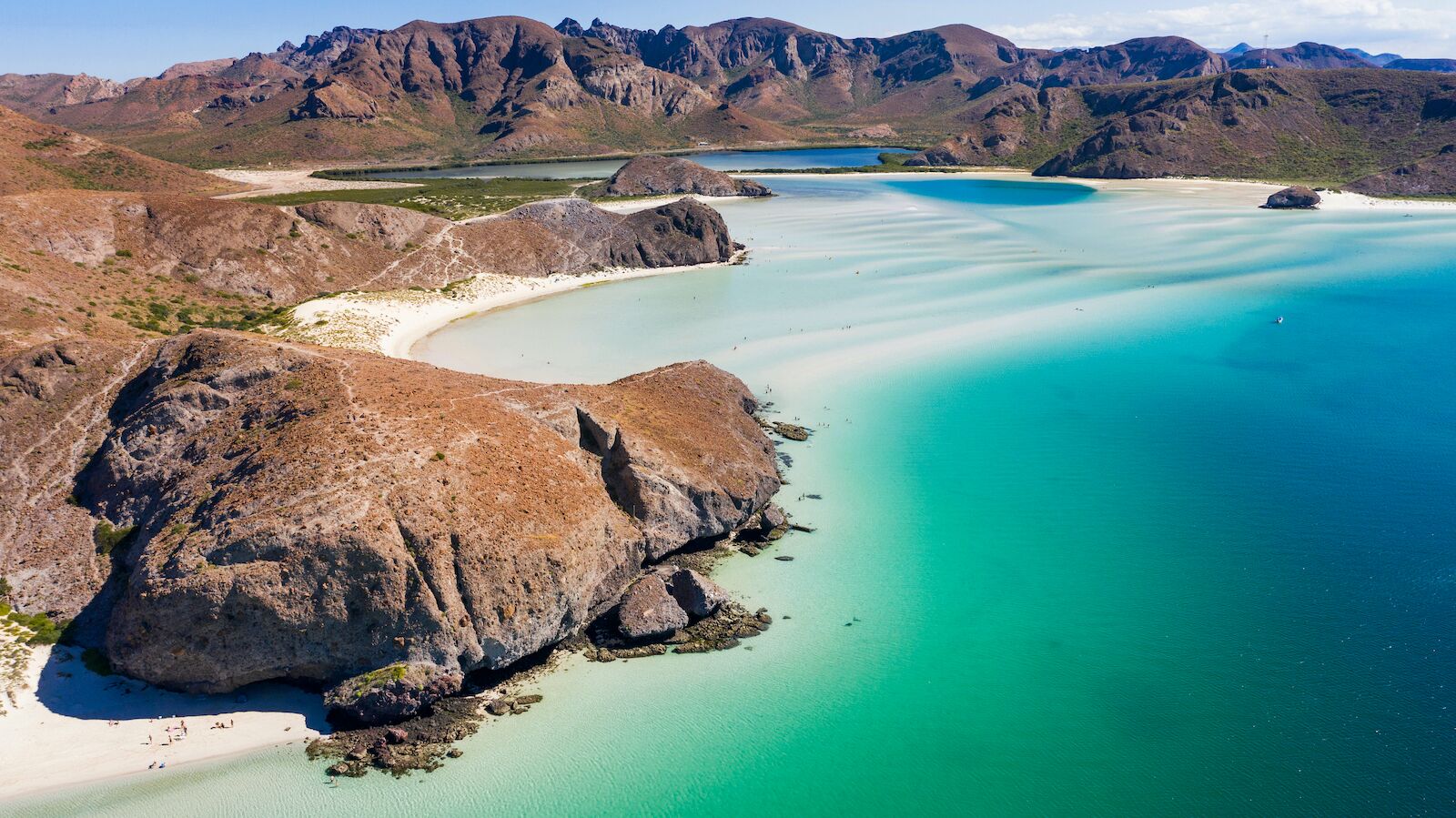 Nowhere is the overtourism problem in coastal Mexico more visible than it is at the beaches of popular resort destinations like Cabo. But just 30 minutes north of La Paz is Balandra Beach, a natural protected area and a safeguard in the face of growing tourism thanks to one thing: visitor caps. The exact number of visitors allowed daily waffled a bit during the pandemic, but the limit is currently 200 visitors per three-hour time slot. Visitors can choose between 8 AM to 11 AM or noon to 3 PM.

If you do drive to the beach, be sure to bring $50 for the entrance fee and pack everything you might need for the day. Part of what makes Balandra seem so remote is the lack of restaurants, beach bars, and other tourist amenities in the vicinity.

Snowboard on sand in the dunes 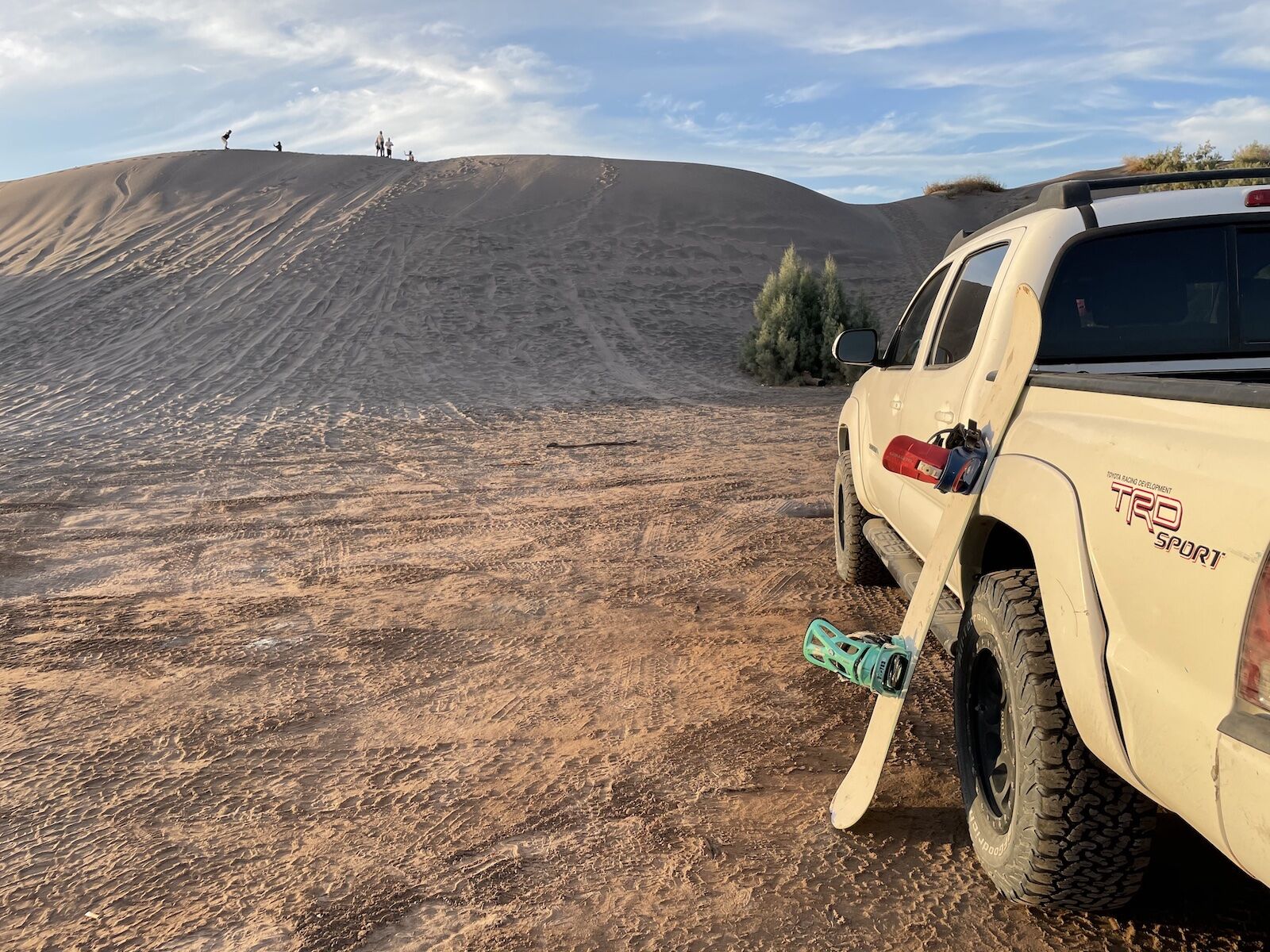 I had the pleasure of visiting La Paz recently, and I planned to go paddleboarding on my first afternoon there. But the wind had other plans for me. Instead of gliding across the glassy waters of Balandra Bay, I wound up gliding down the silky sand dunes of the El Mogote Peninsula, about 45 minutes northwest of the city.

My group of four hopped in a truck at the On Board Baja headquarters in downtown La Paz and headed for the dunes around 6:30 PM. Another duo met us there in their own 4WD vehicle, and we saw others off-roading UTVs nearby. Everyone in my group was a beginner, except for one person who was a proficient snowboarder. But after a few trial runs — and accompanying wipeouts — even the most nervous novices were able to board down the easiest dune without falling. Most were emboldened to try more the difficult runs a few feet away.

After an hour or so of sandboarding, the sun began to set over the Bay of La Paz and the greater Sea of Cortez, both of which frame the dunes. As I stared at the waters where I had planned to paddleboard, I was thankful that the weather had disrupted my plans and encouraged me to try a new sport — one I’d highly recommend. 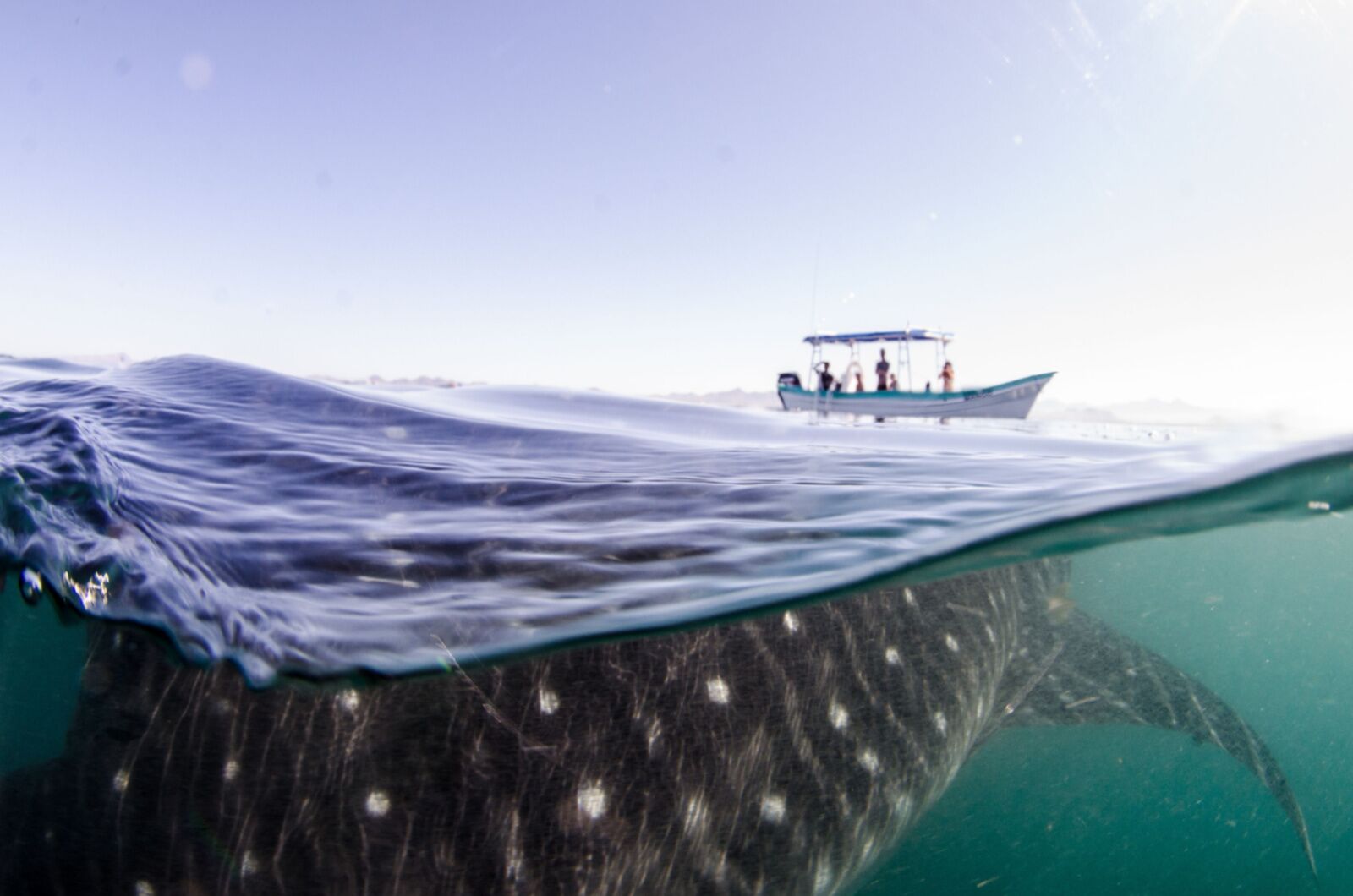 La Paz has yet to see Cabo’s crowds, but it does have a busy season: December through February. It’s not just because the weather is great, with temperatures averaging around 80 degrees Fahrenheit, but also because it coincides with the annual whale shark migration.

From October to April, whale sharks descend on the Bay of La Paz to feast on plankton. Juveniles congregate along the interior edge of the El Mogote Peninsula where the food source is most abundant. Full-grown whale sharks, which are not actually whales but the world’s largest fish, can reach lengths of up to 40 feet, and it’s perfectly safe to swim with the gentle giants. Both Baja Expeditions and On Board Baja host excursions to do just that.

Winter is also whale-watching season in Baja California Sur. Between January and March, grey whales leave the Arctic Circle and swim thousands of miles to arrive in Magdalena Bay and the Ojo Liebre Lagoon north of La Paz. One of the operators that organizes dive trips to Espiritu Santo, the Cortez Club, also facilitates whale-watching excursions from La Paz. 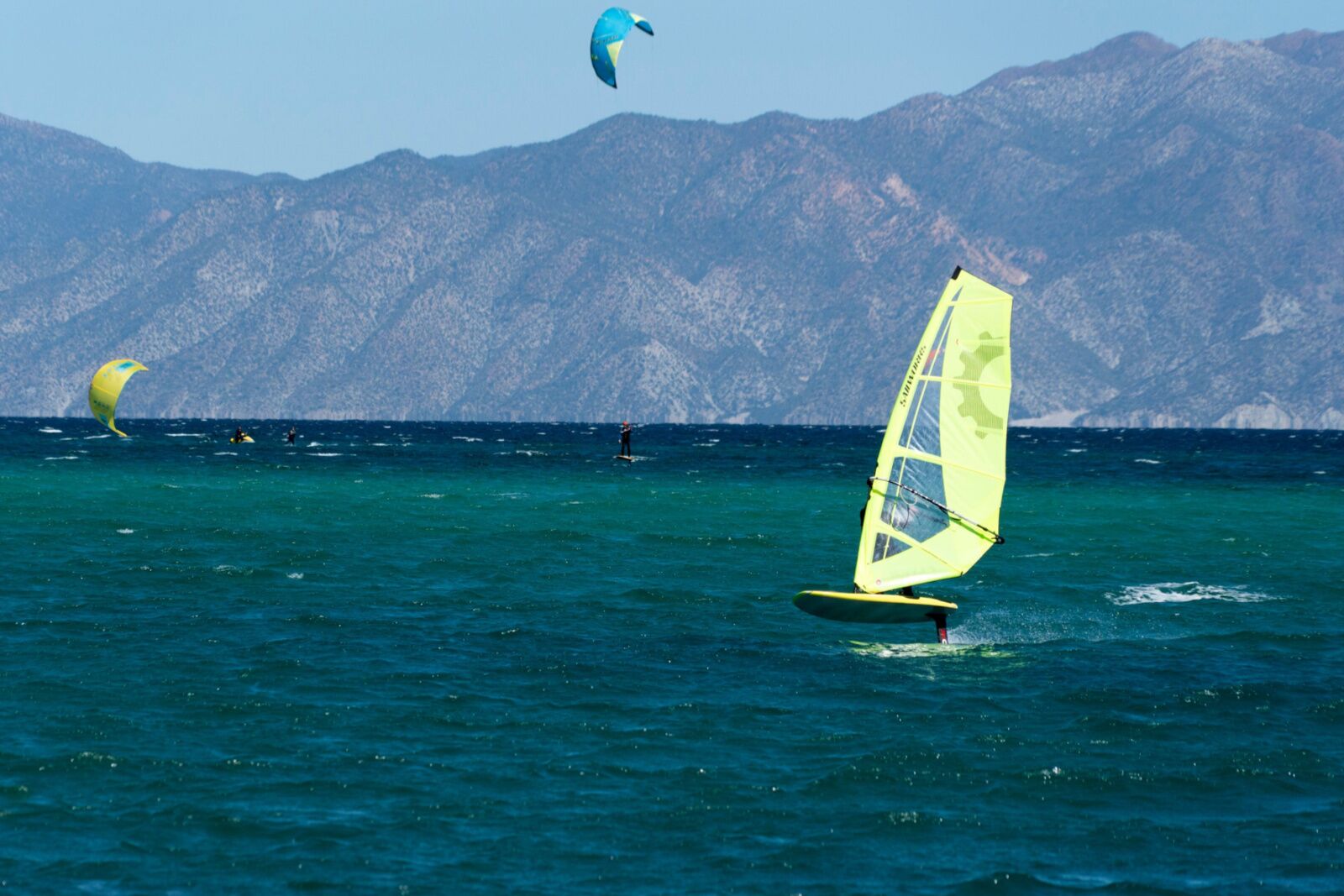 When people say windsurfing is one of the best things to do in La Paz, they’re really suggesting that you plan a day trip to La Ventana or El Sargento. Slightly southeast of La Paz, the twin fishing towns are backed by mountains that create a natural wind tunnel to La Ventana Bay. This spells good news for windsurfers and kitesurfers. The breeze is consistent throughout the year, but the strongest winds blow from November to March.

While there are La Paz-based tour operators that’ll take you to La Ventana, renting a car in La Paz and booking a lesson with an on-site windsurfing school is an excellent excuse to explore even more of Baja California Sur.

How To Plan a Trip To La Paz, Mexico