Smallest is not always a coveted superlative. In Rhode Island’s case, its modest square mileage is all that some travelers know about the state, which measures just 48 miles north to south and 37 miles across. But being the smallest in the United States works to Rhode Island’s advantage when it comes to travel. An easy drive from both New York and Boston, the snug New England hideaway can be toured in a single day, whether you’re day-tripping from a neighboring city or road-tripping through the Northeast. Here’s how to spend 12 perfect hours in Rhode Island.

Breakfast in Providence’s East Side

From the airport: roughly 10 miles, 15 minutes

Rhode Island’s capital city of Providence should bookend your state tour. You’ll want a car to get around for the day, which you can rent at the TF Green Airport or in town, though you’ll spend a majority of the morning on foot. First up on your Rhode Island itinerary: a walking tour of Providence’s East Side and all the best breakfast spots. 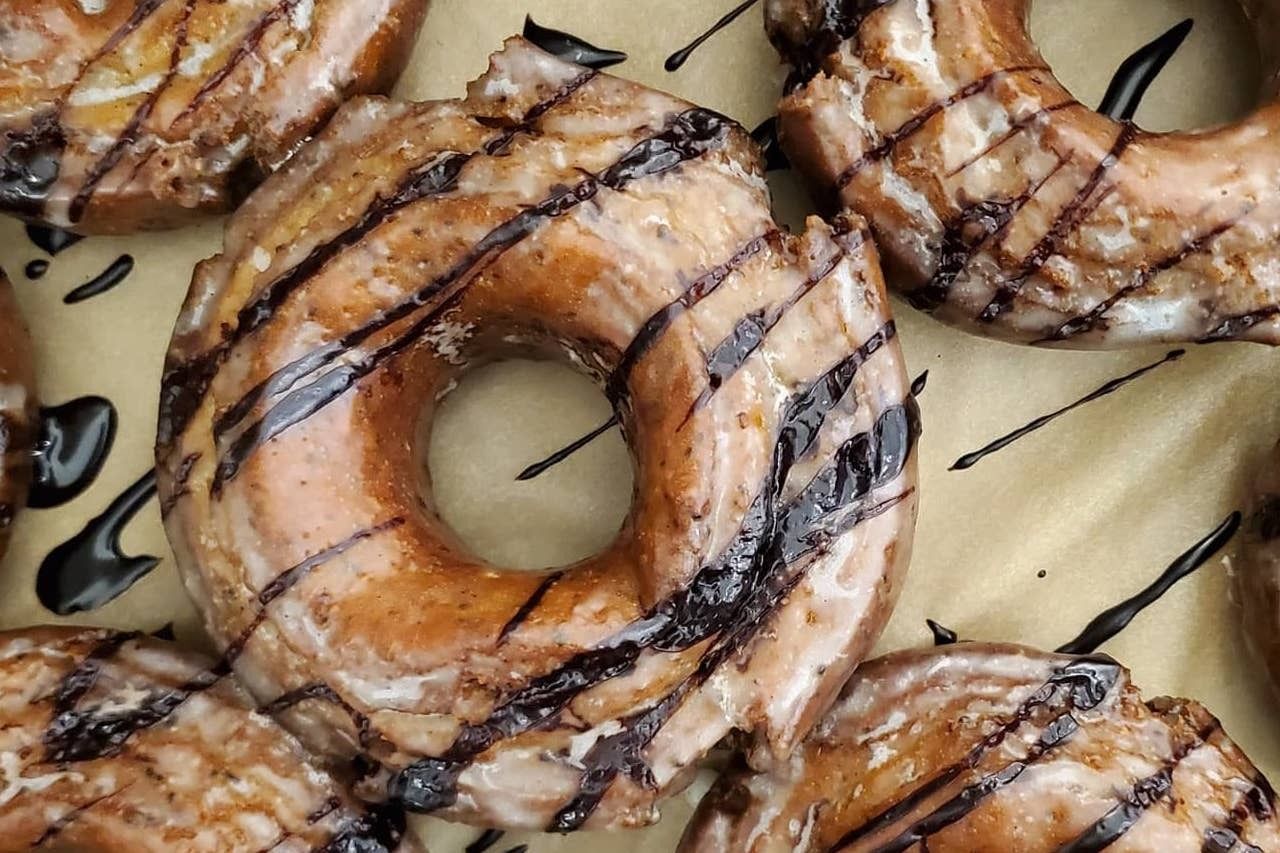 The city’s East Side is comprised of six neighborhoods. Spend the morning focusing on two: north-south neighbors College Hill and Fox Point. College Hill is both old and young. Its National Historic Landmark District is filled with venerable sites like the 18th-century Old State House and the Providence Athenaeum, the nation’s fourth-oldest library. The neighborhood is also where you’ll find both Brown University and the Rhode Island School of Design. Students congregate here and in Fox Point, where they mingle with young professionals and new families in the cafes and thrift stores lining Wickenden Street.

Both neighborhoods are highly recommended for breakfast. If sightseeing in College Hill has you ready to fuel up right away, try visiting The Shop for a coffee and Knead Doughnuts for the perfect coffee-doughnut combo. Both are wholesome, if not the healthiest, and serve direct-trade coffee and vegan and flourless doughnuts, respectively. For something lighter, head to Amy’s Place in Fox Point for a matcha, choconut, tropical, or vegan smoothie and an on-the-go breakfast sandwich, bagel, bolo, or burrito. On the other hand, it’s hard to beat the classic diner fare at Brickway on Wickenden, featuring 15 omelets and eight types of pancakes. It’s going to be a busy day, so you may want to make your first meal a hearty one.

Pop over to Pawtucket 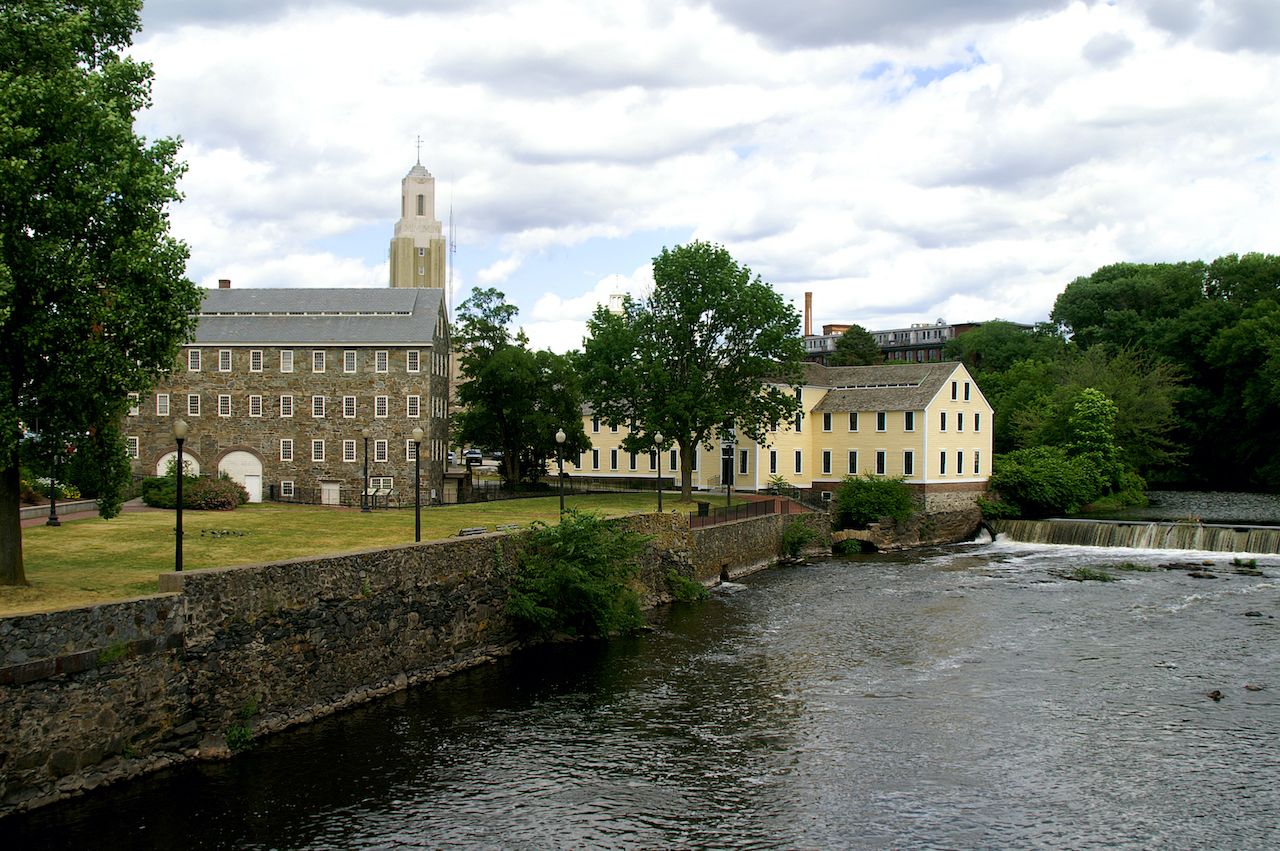 A stone’s throw from Providence is a city on the Blackstone River that’s better known as the birthplace of America’s Industrial Revolution. At the tail end of the 18th century, Samuel Slater built the first cotton mill in North America here in Pawtucket, using a water-power technique he learned as an apprentice in England. This earned him two nicknames: “the Father of the American Industrial Revolution” to people stateside and “Slater the Traitor” across the Atlantic. Joining the Old Slater Mill in the national historic landmark complex are the Wilkinson Mill, an early textile producer, and the Sylvanus Brown House, a precursor to the Slater Mill that dates to 1758. Today, it houses relics of pre-industrial cloth-making like a loom and spinning wheel.

Pawtucket is more than its early American heritage, though. It’s creative, with an annual arts festival and riverfront summer concert series. It’s also outdoorsy, with opportunities to boat downriver to Narragansett Bay and fish below the Division Street Bridge. Pawtucket also hosts Rhode Island’s Music Hall of Fame and an impressive antique mall. There’s even a craft-beer scene. After the Blackstone River Valley National Historical Park, learn more about it at the Isle Brewers Guild, a co-op representing 15 New England breweries and distilleries.

Second to its size, Rhode Island’s 400-mile coastline might be what it’s most famous for. With that comes incredible Rhode Island seafood. Fresh, succulent, and often fried, options range from sausage-stuffed clams and creamy New England chowder to lemon-butter lobster and oysters on the half-shell. Suffice it to say you’re going to want to try some while in town. Enter South County. 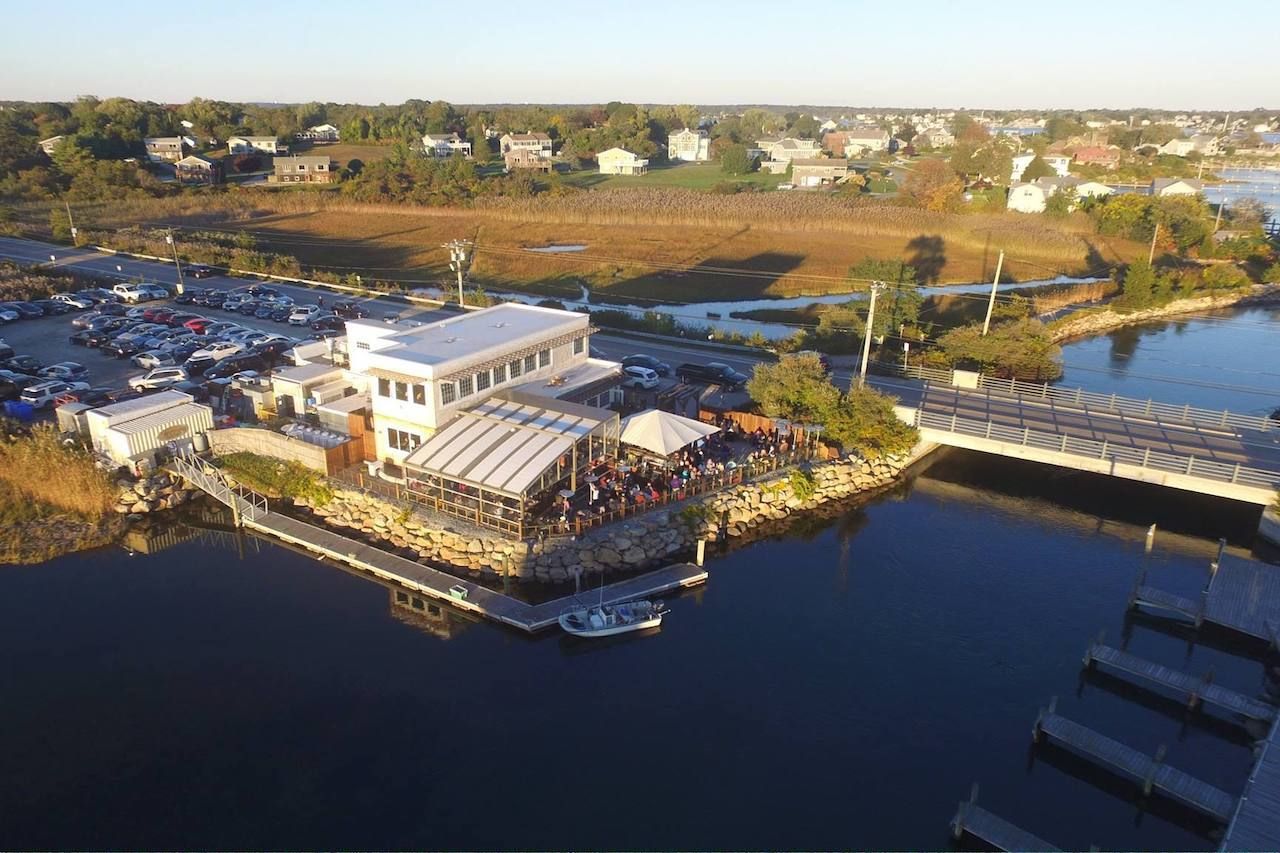 Home to beachfront hamlets like Watch Hill that’ll have you rerouting your summer trip to Nantucket, South County has some must-eat seafood restaurants that are more than worth a visit. If you want to make this stop your base for a bit while indulging in seafood without having to travel, COAST at Watch Hill’s splurgy Ocean House hotel is where to go. If you have to pick just one restaurant on a journey through, go to the Matunuck Oyster Bar in South Kingstown.

Purveyor of some of Rhode Island’s freshest oysters, Matunuck proudly serves homegrown and harvested shellfish alongside locally sourced produce and farm-raised and wild-caught seafood. More than just a place to eat, Matunuck also provides guests the opportunity to learn about their meals, offering hour-long tours of its shellfish farm in Potter Pond. Tours begin with a lesson in aquaculture and fisheries where you can learn about their impact locally and globally. Guests are then shown around the seven-acre oyster farm, where they’ll learn about the pond-to-plate shellfish that’s featured on the restaurant’s menu.

To Newport and Narragansett Bay

No trip to Rhode Island would feel complete without a visit to Narragansett Bay. The same is true of Newport, the state’s second city, conveniently located on Aquidneck Island right there in the water. This gives visitors a couple of options for touring the bay, either on land or by boat. But first: a tour of the lavish, historic Newport Mansions. 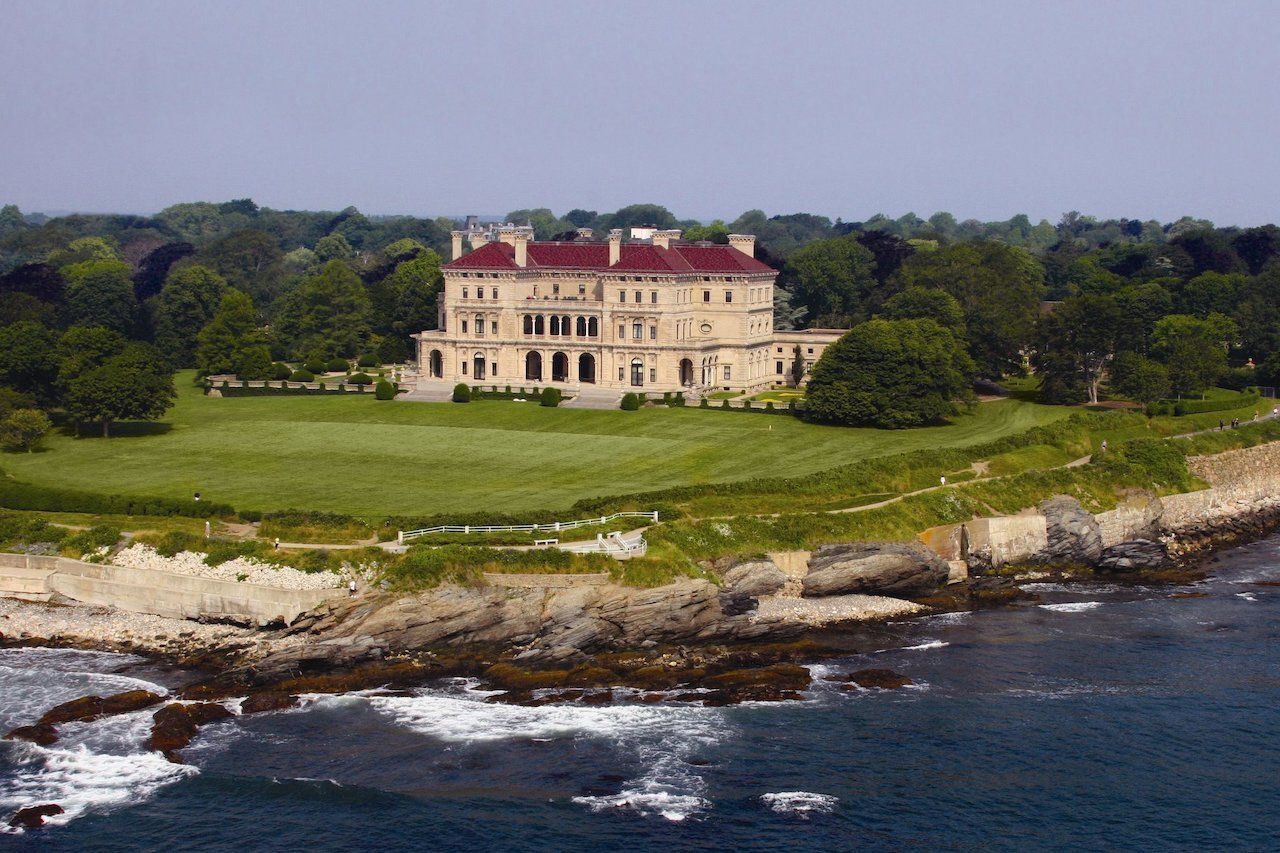 Now protected by the Preservation Society of Newport County, the Newport Mansions were originally built in the late 19th century as “summer cottages” for the East Coast elite. These opulent properties offer visitors a glimpse into America’s glitzy Gilded Age. There are 11 in total. The Breakers and Rosecliff are worth prioritizing if you have a busy schedule. The grandest mansion, The Breakers was commissioned by the Vanderbilt family. It’s now a National Historic Landmark. Baroque, palatial Rosecliff is reminiscent of Versailles. Originally a party estate for silver heiress Tessie Oelrichs and her steamship, the property is still used as an events space for everything from private weddings to the Newport Flower Show every spring. It’s also been featured in films like the 1973 version of Great Gatsby.

To fully appreciate the waterfront estates, tour them on foot following the 3.5-mile Cliff Walk. Then, swap the bay views for the bay itself by chartering a sailboat if your time, budget, and the weather allow. A less costly, on-land alternative to zipping around Aquidneck Island is the peddle-powered Rail Explorers experience operated by the Newport and Narragansett Bay Railroad. You likely won’t have enough time to do it all, but whichever afternoon activity you choose, you’re guaranteed unforgettable scenery and a bit of exercise to boot.

From Newport: roughly 35 miles, one hour

It’s not NYC or Boston, but Providence pulls through with options for every type of traveler. 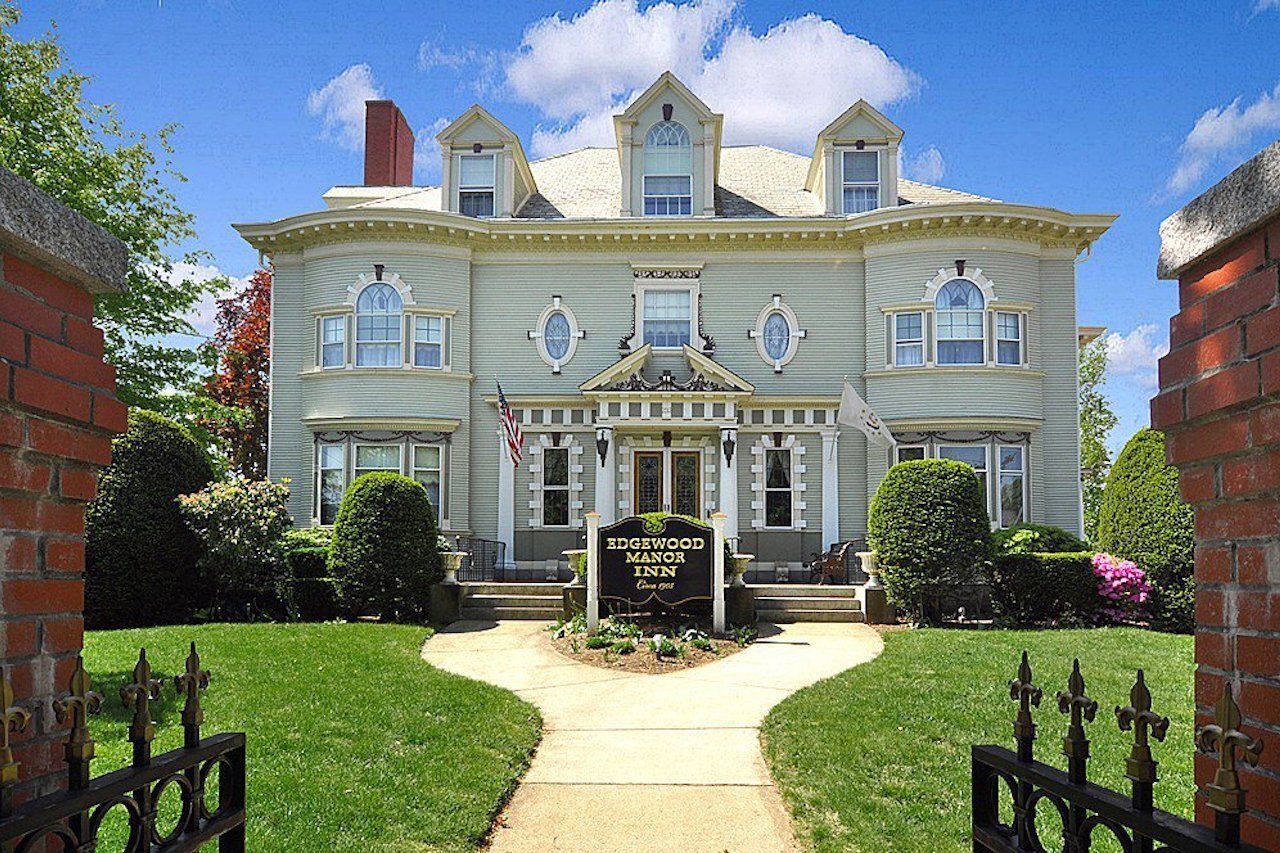 If you’re looking to splurge for your one night in town, the Edgewood Manor Inn is a romantic, Victorian-style bed-and-breakfast housed in an early 20th-century mansion a few miles from downtown. Also spendy, Hotel Providence and The Dean hotel are centrally located, while the NYLO hotel has a boutique experience at a slightly more accessible price. Budget travelers will find reliable chains like Quality Inn and La Quinta near the airport, while Airbnb is a safe bet for finding something affordable in town.

Once you’ve settled in, revisit Providence’s food scene. You’ll find it all here: plant-based everything at the Plant City food hall, done-up tacos at Tallulah’s Taqueria, and Greek eats at Yoleni’s downtown. Some of the best dinner spots are concentrated in Federal Hill, from nonna-approved Italian at Enoteca Umberto to Southern-inspired comfort food at Bucktown. The same is true for bars if you’re interested in a pre- or post-dinner drink. Standouts include speakeasy-style The Avery; the kitschy, Americana-themed Ogie’s Trailer Park; and the Tammany Hall Pub & Parlor, which doubles as a cigar bar.

Wherever you wind up, end your evening on the Waterplace Park Riverwalk. If you visit in summer or fall, you can center your late-night stroll on WaterFire, an epic bonfire installation that stretches roughly two-thirds of a mile through the public spaces lining Providence’s three rivers. Honestly, we can’t think of a better way to wind down your full day in Rhode Island.

10 Things You Grew Up Doing in Rhode Island

Every Type of Clam Chowder, Ranked