DUBLIN AND BELFAST, Cork and Galway. Your trip to Ireland will (and no doubt should) include exploring some of Ireland’s major cities…though, to be fair, they do a great job of preserving a small-town feel. But you shouldn’t leave the island without taking to the country roads and finding your way to some of the villages, hamlets, and towns below. They’re where a lot of the magic that makes Ireland such a special place resides. 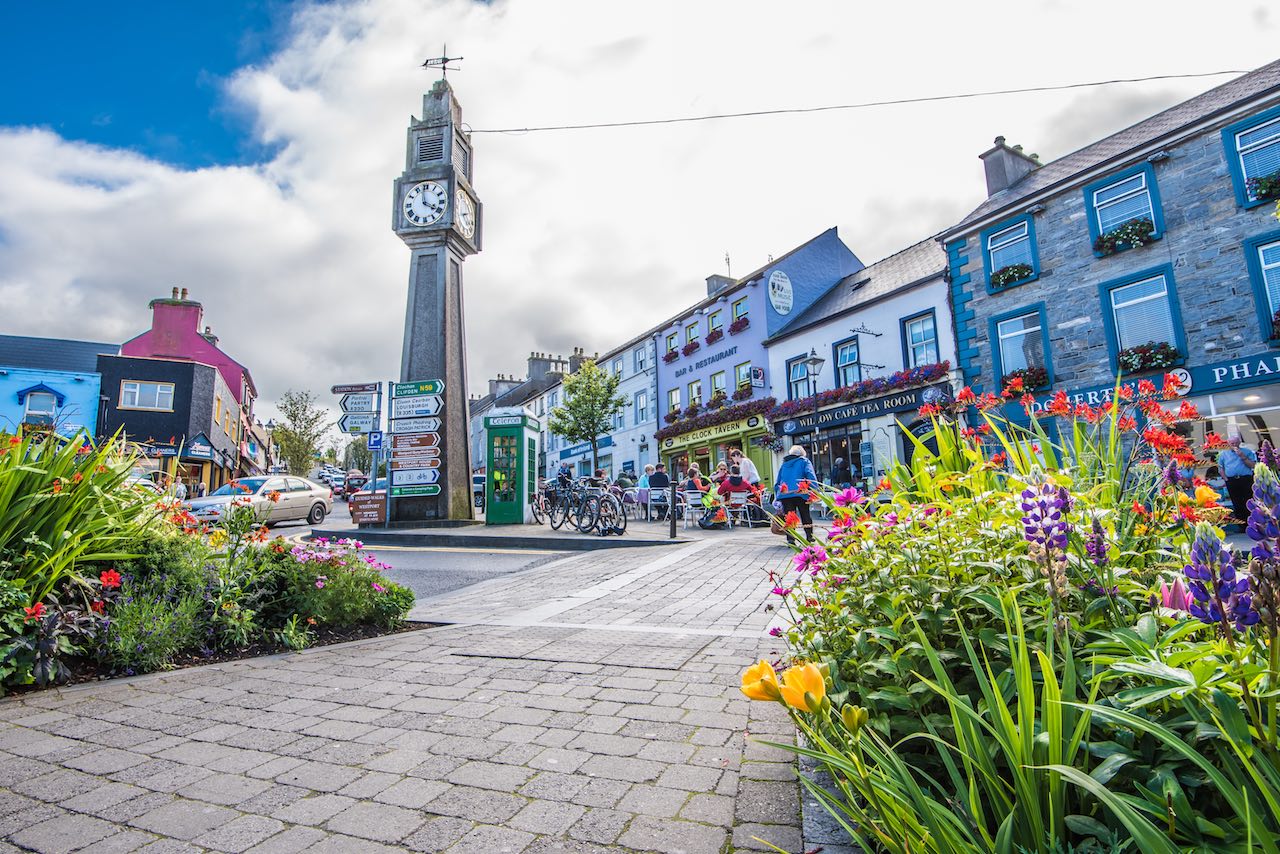 Find it: Roughly halfway between Ballycroy and Connemara National Parks on the Wild Atlantic Way

Westport strikes the perfect balance between country town and lively hub. The vast majority of shops are independent stores, selling goods from Irish knitwear to local art. The pubs always seem to be full, particularly at the weekend — fans of traditional music should head to Matt Molloy’s for live music every night (occasionally led by Molloy himself, member of Irish band The Chieftains).

Just a short walk from the town center is Westport House and Gardens. One of the most treasured country homes in Ireland, the property is filled with lavish touches (the Sicilian marble staircase is particularly impressive). Take a tour of the grand public rooms and you’ll learn all about the building’s legacy and its connection to one of the bravest women in Irish history, pirate queen Grace O’Malley.

Behind Westport House is the serene quay, a quick stroll and calm reprieve from the buzz of town. It’s also one of the best spots for seafood — The Idle Wall has a country cottage feel and serves up local oysters and mussels dowsed in fennel, white wine, and cream. 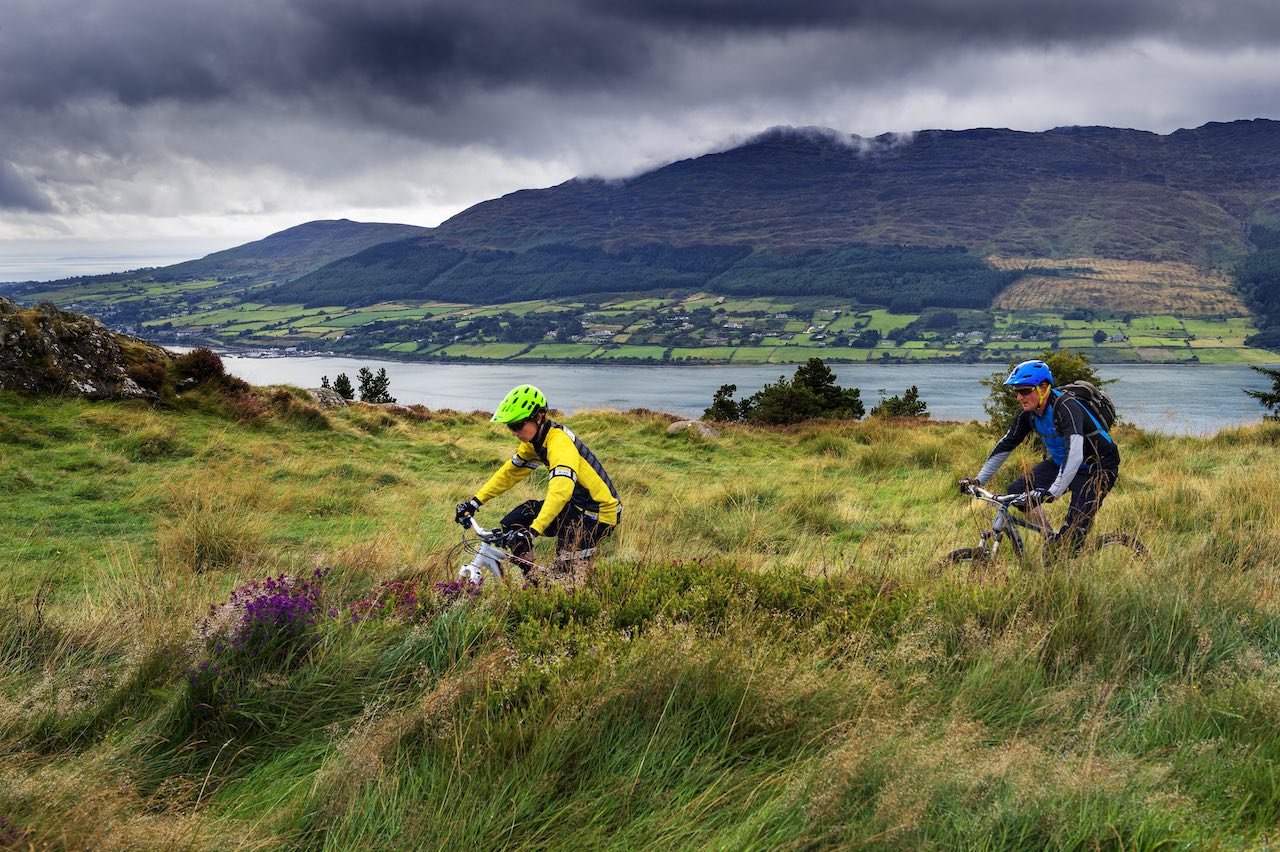 Find it: On the coast an hour south of Belfast

There’s a charmingly retro vibe to Newcastle that’s partly a result of its old-school lidos — outdoor swimming pools that were hugely popular in the 1930s. You’ll see a couple along the shore, and cold weather has never stopped anyone taking a dip. Rock Pool is the one to head for, if you’re feeling brave.

But Newcastle is a coastal town with more than just sand and sea in its favor. The town sits at the base of Slieve Donard (the highest mountain in Northern Ireland), the rest of the Mourne Mountains sprawling behind. A trek is compulsory, the views you get being well worth the effort; plus, when you return to town, you can always rest your muscles in a seaweed bath at Soak. Follow up the spa with dinner at Vanilla, and if you spot Finnebrogue venison on the menu, indulge — this local delicacy is some of the finest across the whole island. 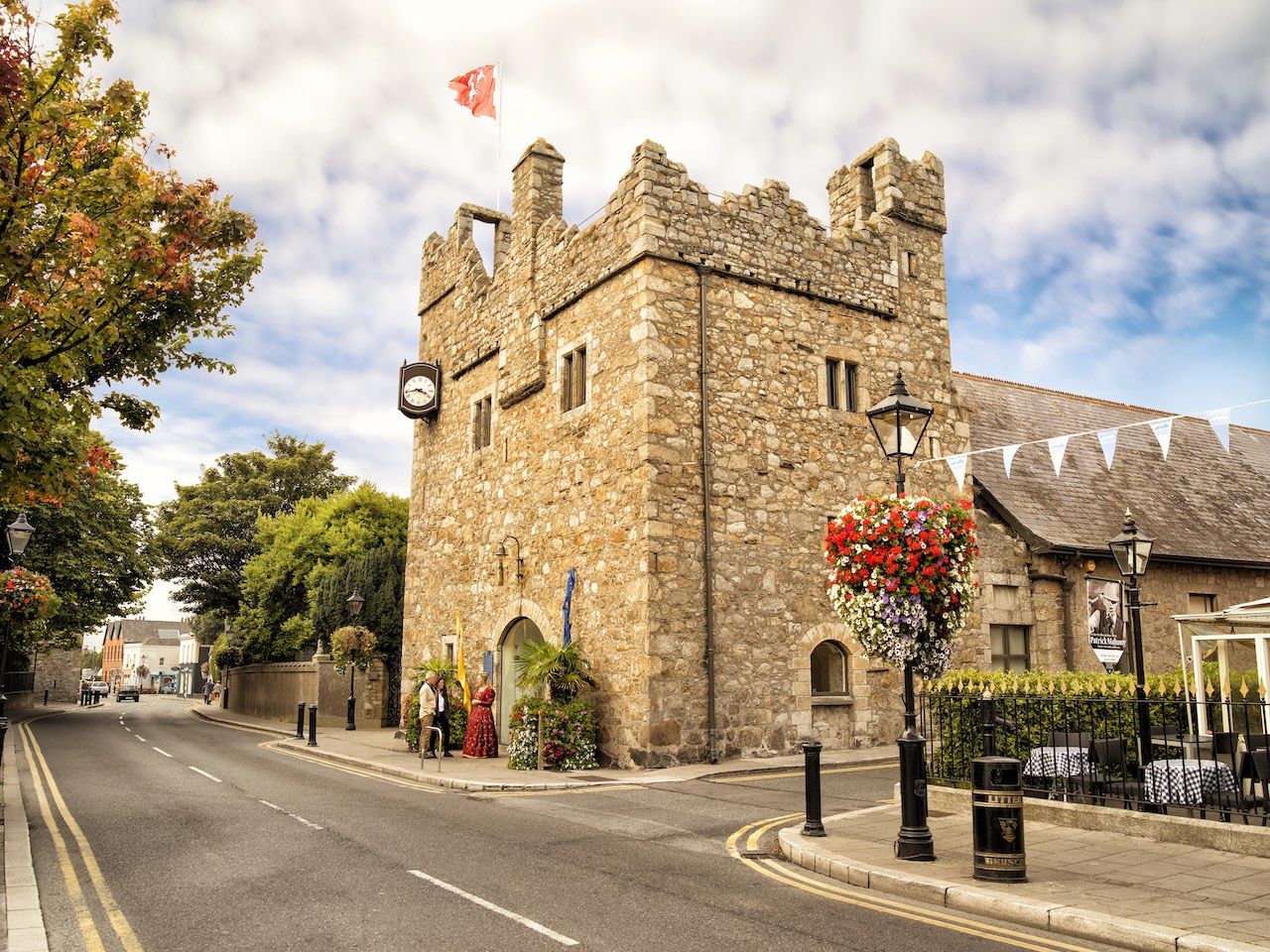 Find it: Half an hour southeast of Dublin city

Home to a 10th-century church, two Norman castles on its main street, and an island of the same name where you can expect to see rabbits, goats, church ruins, and the most expensive one-bedroom home in Ireland — Dalkey Tower — this lively spot is one of the most beautiful towns you’ll find. No wonder Bono, The Edge, and Van Morrison have homes in the area.

There’s so much to do here: Go kayaking around the local harbor and keep an eye out for seals and bottlenose dolphins, try abseiling off Killiney Hill, and — for something fun and traditional — pop into Biddy’s Cottage for a spot of tea, cakes, and Irish storytelling by the turf fire. 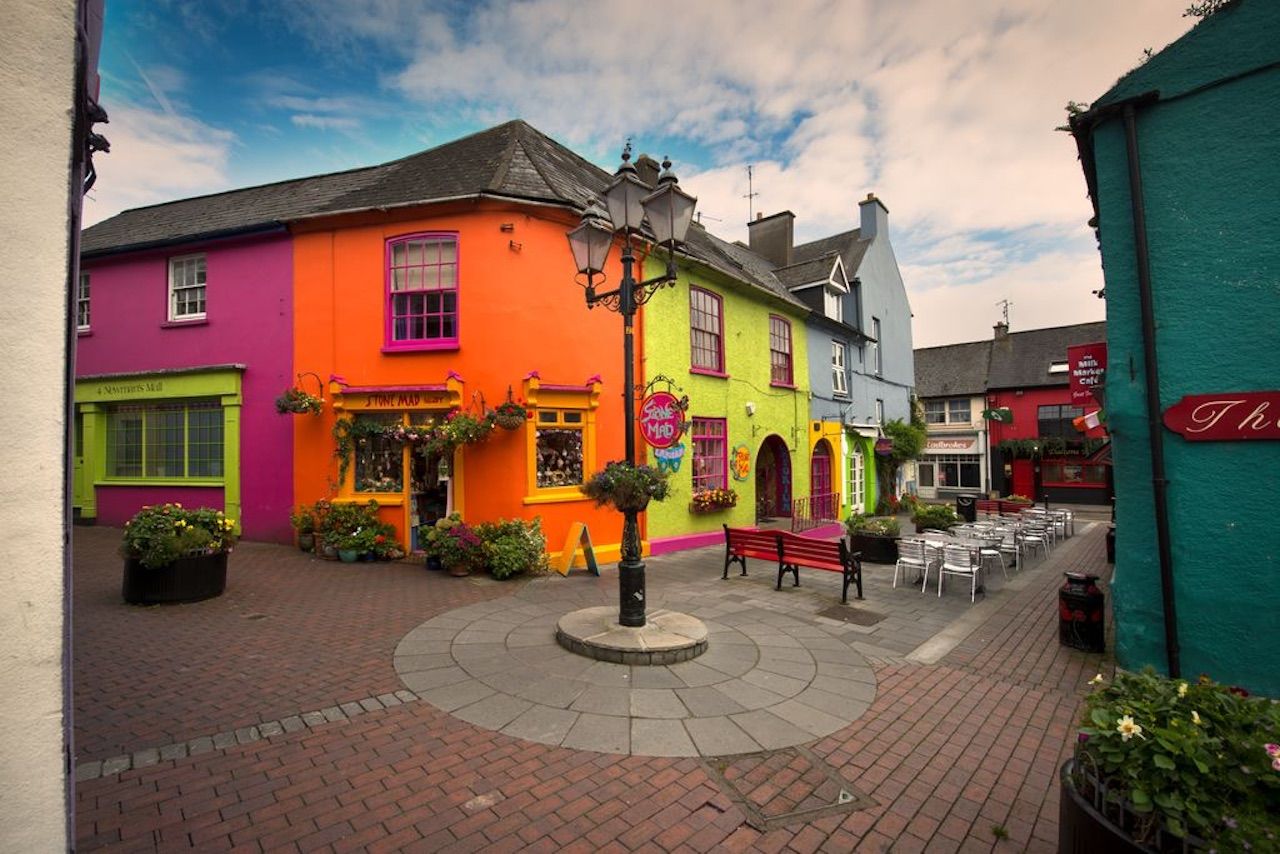 Find it: Half an hour south of Cork city, near the mouth of the River Bandon

With blocks of brightly colored buildings, a thriving harbor, and a serious foodie scene, Kinsale is a picture-perfect Irish small town. It’s also known for its shopping — check out the galleries along Main Street and pop into Giles Norman Photography to see gorgeous shots of the local landscape.

Kinsale has a long-held reputation as a home of impeccable dining, and it has more than its fair share of excellent restaurants. Fishy Fishy is run by renowned seafood chef Martin Shanahan and his wife Marie and is the place to go for fresh, local fish. As you’d expect, the menu is constantly changing depending on the day’s catch, but the seafood found off the southwest coast never disappoints. Think lobster, monkfish, mussels, and oysters. 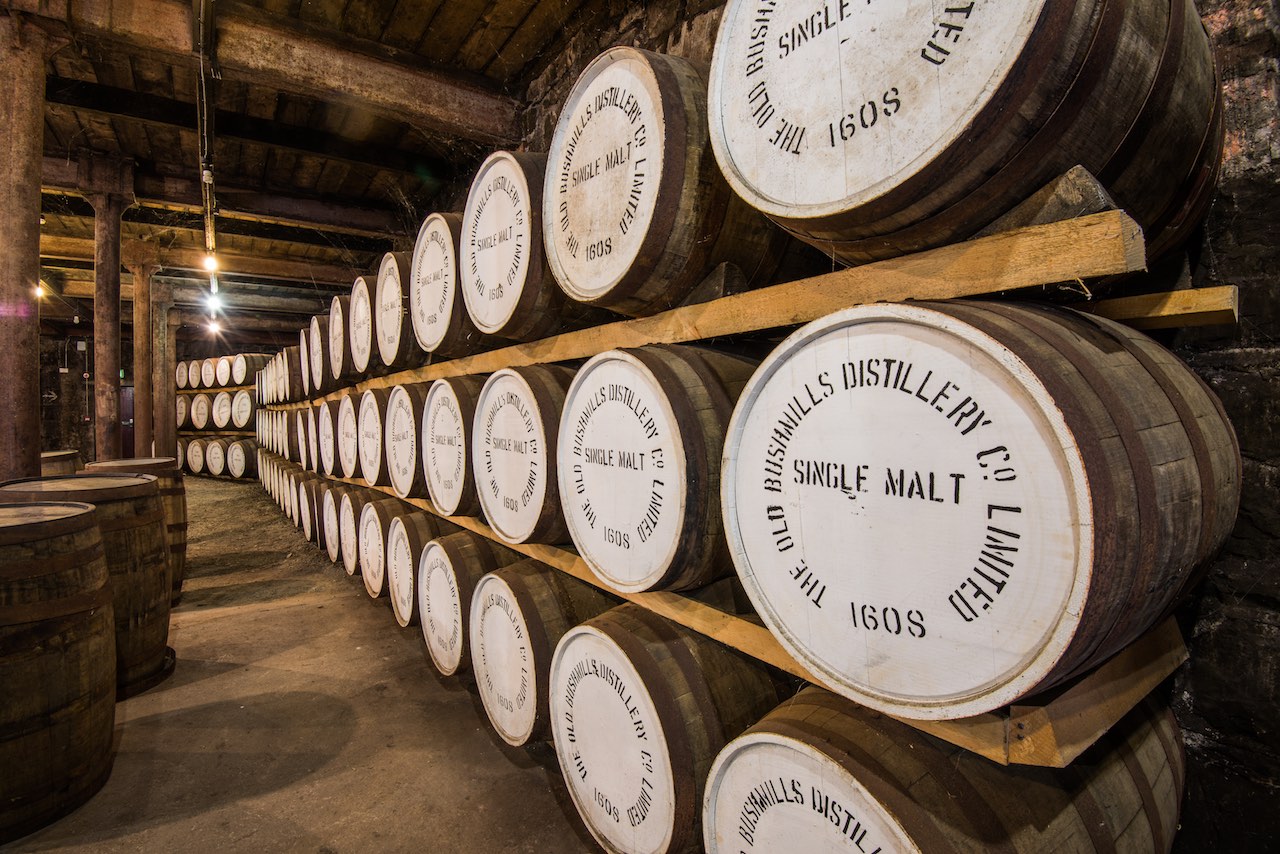 Find it: An ideal location between the Giant’s Causeway and Dunluce Castle on the Causeway Coastal Route

Its name is synonymous with whiskey, but Bushmills is much more than just a distillery — it’s a pretty little town along the north coast of Northern Ireland. Wander its streets and you’ll come across plenty of cute shops and old-fashioned pubs. But most visitors come for the gold stuff, and the tour at The Old Bushmills Distillery is definitely worth the visit. The whiskey produced here is the oldest in Ireland, crafted from Irish barley onsite for over 400 years. You’ll learn just how the uisce beatha (meaning whiskey in Gaelic) is made before sampling the final product in the cozy tasting room.

Bushmills is a short drive from the Giant’s Causeway, a UNESCO World Heritage Site, and a spectacularly striking sight. Legend has it that the 40,000+ hexagonal basalt columns rising from the waves are the remains of a causeway to Scotland built by giant Finn MacCool. Ask a geologist and they’ll tell you volcanic activity was the actual cause, but truth can be a poor storyteller.

Find it: At the head of the long Kenmare Bay, just south of Killarney National Park

The drive around the Ring of Kerry is one of the most popular routes in Ireland, and Kenmare serves as a top stop-off along the way. This is a quintessential Irish market town — visit on a Wednesday and you can browse the stalls at the farmers market, filled by regional purveyors of some truly delicious artisan foods. If you spot Toon’s Bridge Dairy, stop for a taste of their mozzarella — it’s a flavorful blast of creaminess made in West Cork.

Even when the market isn’t in town, there are still plenty of options to keep a belly happy. Mulcahy’s is a frequent star in the respected McKennas’ Guides to the best restaurants in Ireland, and has a carnivore-forward menu — complete with pork belly, halibut with bacon and mussel, beef Wellington, and free-range chicken with butternut and wild mushrooms.

Find it: On the coast north of Dublin, just shy of Northern Ireland

A town whose chief views include medieval ruins and passing fishing boats might often be referred to as “sleepy,” but there’s a whole lot going on in Carlingford. Plenty of restaurants and pubs dot the center, where you can grab a casual bite, and you’ll often find live music and trad sessions in the bars along the main street.

The town sits right on the edge of Carlingford Lough, which makes for both killer views and the opportunity for adventure. It started with the Vikings, who landed in Ireland in the ninth century and, according to archaeologists, hung out right here. These days, adrenaline-fueled sports are big — think kayaking, canoeing, watertrampolining, and windsurfing. Not to mention the wine tasting, bubble soccer, Oyster Festival, and laughter yoga. If any of that piques your interest, you’re going to have to come check it out for yourself. 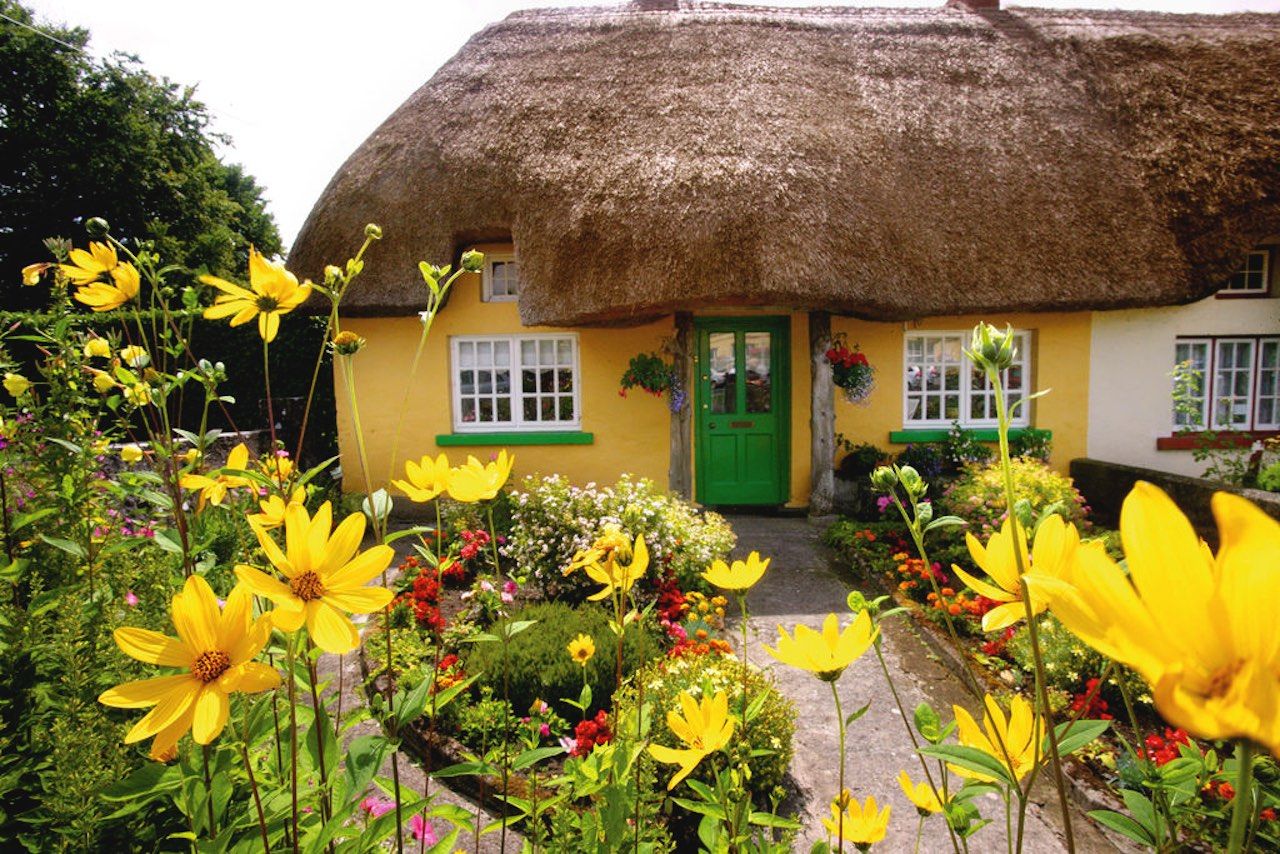 Find it: A 20-minute drive southwest of Limerick city

There’s a chocolate-box feel to Adare, owing mostly to the thatched cottages lining Main Street. The gorgeous houses are all thanks to the Earls of Dunraven, who gave the village a romanticized facelift and built Adare Manor (see below). Today, the whimsical aesthetic remains, though the thatch now shrouds shops and cafés rather than private homes.

There’s plenty to keep you occupied in town — tour the 13th-century Adare Desmond Castle or check out the Augustinian Priory. Nearby Adare Manor is another 19th-century stunner that’s now home to a luxurious hotel (reopening in the fall of 2017, following extensive renovations).

Find it: On the Causeway Coastal Route just west of Portrush

Not far from Bushmills, Portstewart has a genteel feel to it and is beloved by golfers, thanks to that renowned course overlooking the sea (which will host the 2017 Irish Open).

But the real draw, and cause of recent interest in the area, comes down to a tiny seafood hut right on the beach. Harry’s Shack was named the best restaurant in Ireland by McKennas’ Guides just a few months after opening its doors in 2014. This little wooden hut overlooking the rolling waves and golden sands of Portstewart Strand is home to some of the best seafood you could hope to find — fresh haddock with a crisp, buttermilk batter (and chips, of course); prawn tails dripping in garlic, lemon, and parsley butter; and creamy fishcakes with smoked mackerel. You’ll need to stay overnight just so you can experience it twice. 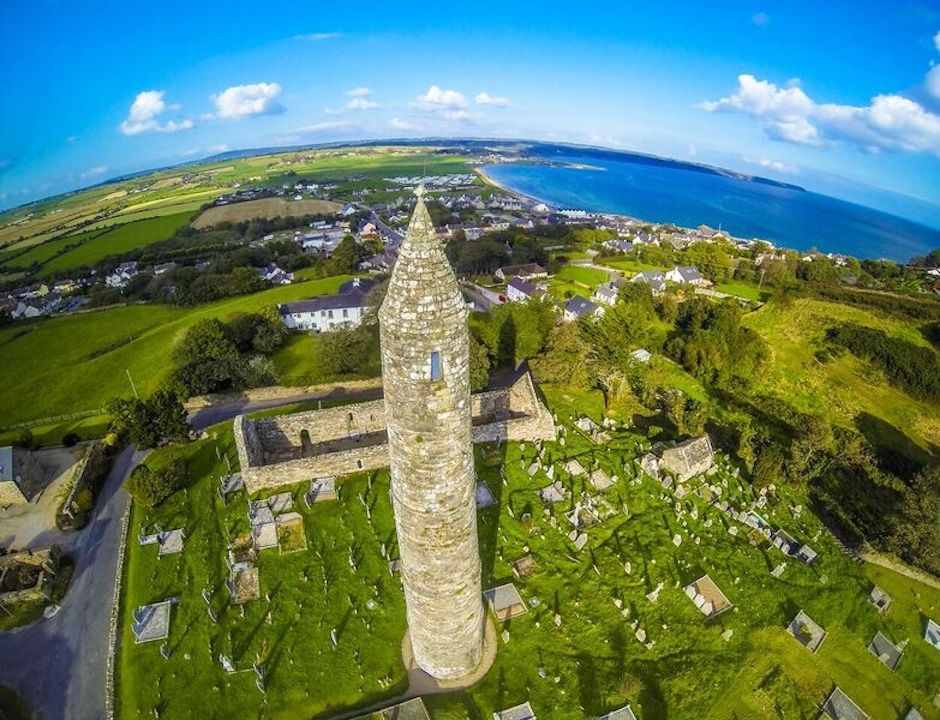 Find it: Right on the southern coast about halfway between the cities of Waterford and Cork

This is a lovely fishing village that’s believed to be the oldest Christian settlement in the country. Home to lively pubs and restaurants and a perfect sandy beach, Ardmore also has its very own 12th-century Round Tower. Local monks once used it as a refuge, bringing their most valuable books and possessions to the tower in the case of attack, then pulling up the wooden ladder to wait out any danger.

While you’re in town, you’ll want to pay a visit to Ardmore Pottery & Craft Shop to browse (and perhaps buy?) works by more than 150 Irish artists. And if your hiking legs are feeling shipshape, you may even want to take on St. Declan’s Way. It’s based on ancient pilgrimage routes and runs for 56 miles from Ardmore to the Rock of Cashel in County Tipperary.