AS SOON AS I moved to Mexico, I started dreaming about traveling to Copper Canyon in northern Mexico by “Chepe” — the only passenger train still operating in the country — and meeting the Tarahumara, indigenous people known for their isolated life deep in, and above, the canyons of the Sierra Madre Occidental.

Almost five years later, my dream came true. I boarded the train in the city of Chihuahua to witness one of the most spectacular views in Mexico and to meet not only one but two of the most mysterious communities in the country: the Tarahumara and the Mennonites. 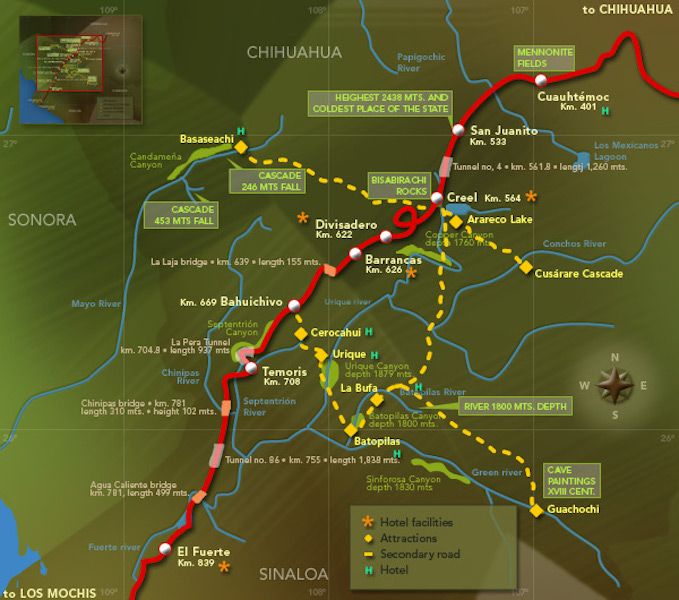 The train connects the city of Chihuahua to Los Mochis on the Pacific coast and crosses Copper Canyon, a group of six canyons that are five times bigger than the Grand Canyon. The route is 673 km long and can be made in less than a day; however, it’s worth making stops along the road. 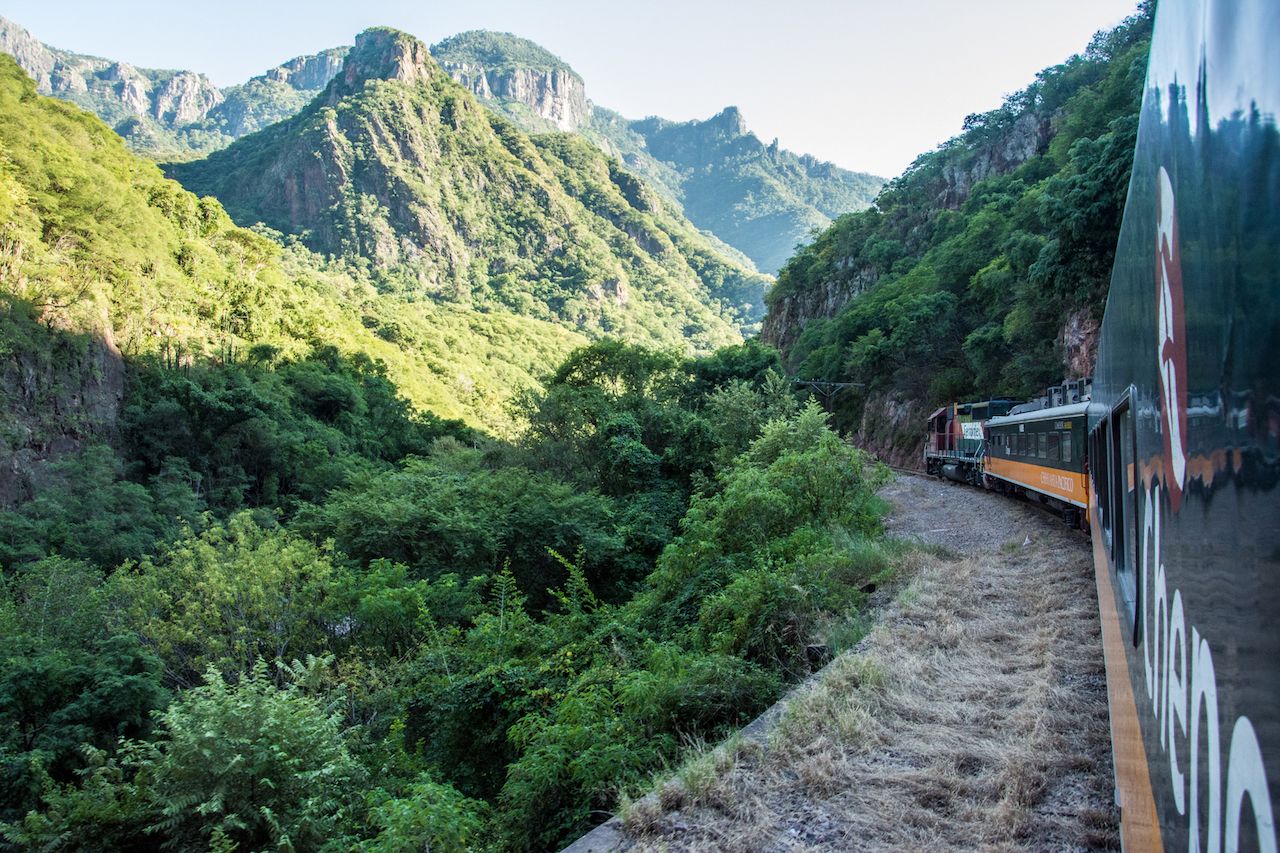 The train has two classes; the first one and the economic one.

The train with first class cars departs every day from Chihuahua to Los Mochis and Los Mochis to Chihuahua at 6:00 AM, arriving at its final destination at 9:00 PM. It stops for passengers boarding at the stations of Cuauhtémoc, Creel, Divisadero, Posada Barrancas, Bahuichivo/Cerocahui, Témoris, El Fuerte and Los Mochis. There are 2 or 3 air-conditioned and heated cars with 64 reclining seats, ecological toilets, dining car and a bar. The ticket for the entire ride costs around $ 170 US, but note that with this ticket, you can get off the train only three times. If you intend to stay at least one day in every single stop to go sightseeing, I recommend you buy tickets separately from one station to another. 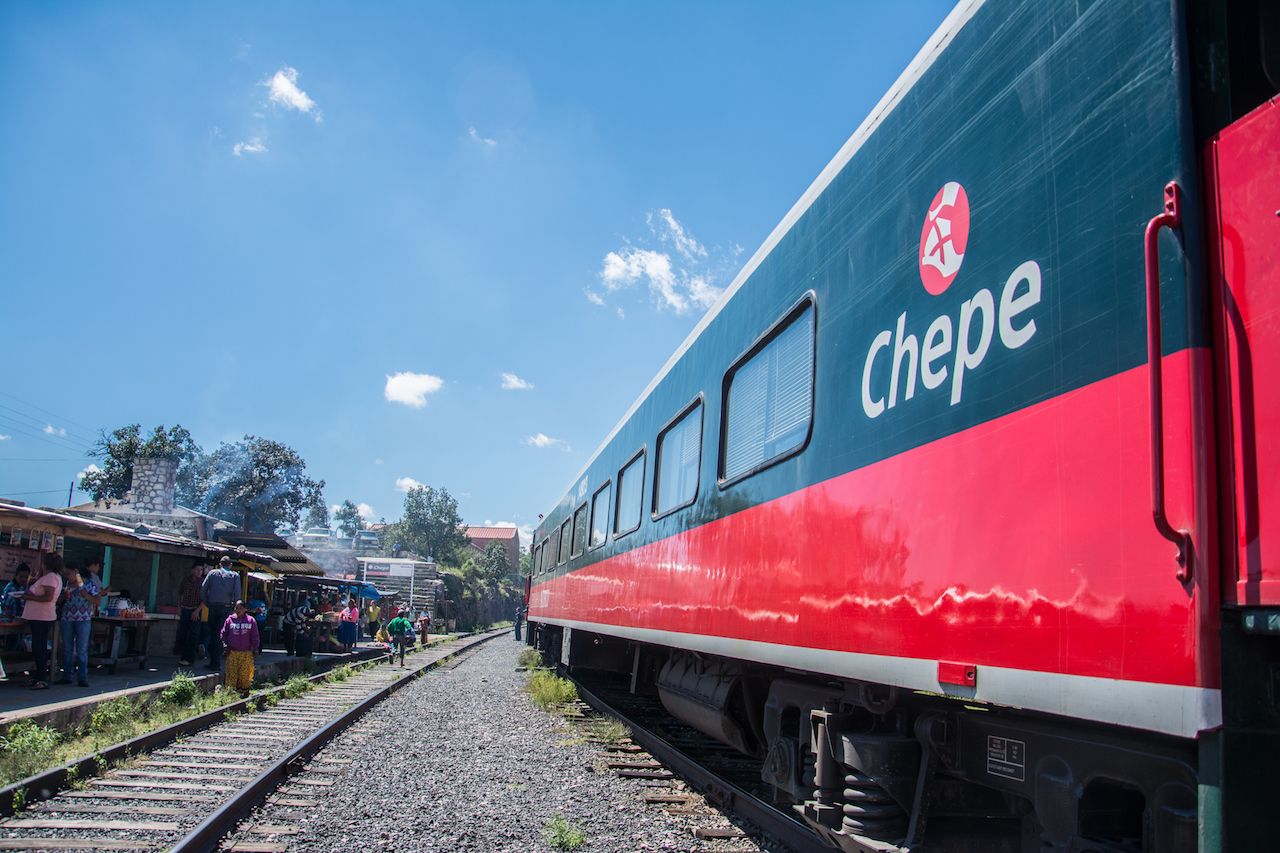 The best time to travel is in autumn. In the summer, the weather is wet and the train gets very crowded, so you may not be able to get on the economic class since the seats aren’t numbered. The temperatures in the winter drop below zero and although the train cars are heated, the hotel rooms aren’t. The spring temperatures are comfortable, but the landscape can be dry after four months of drought.

The city of Chihuahua is interesting to walk through and is home to magnificent architecture, such as the cathedral and Casa de Juarez. Make sure to visit Museo Historico de la Revolucion where General Francisco “Pancho” Villa, one of the most prominent figures of the Mexican Revolution, lived. The museum conserves documents, photographs, weapons, and many other objects related to the time of The Revolution. 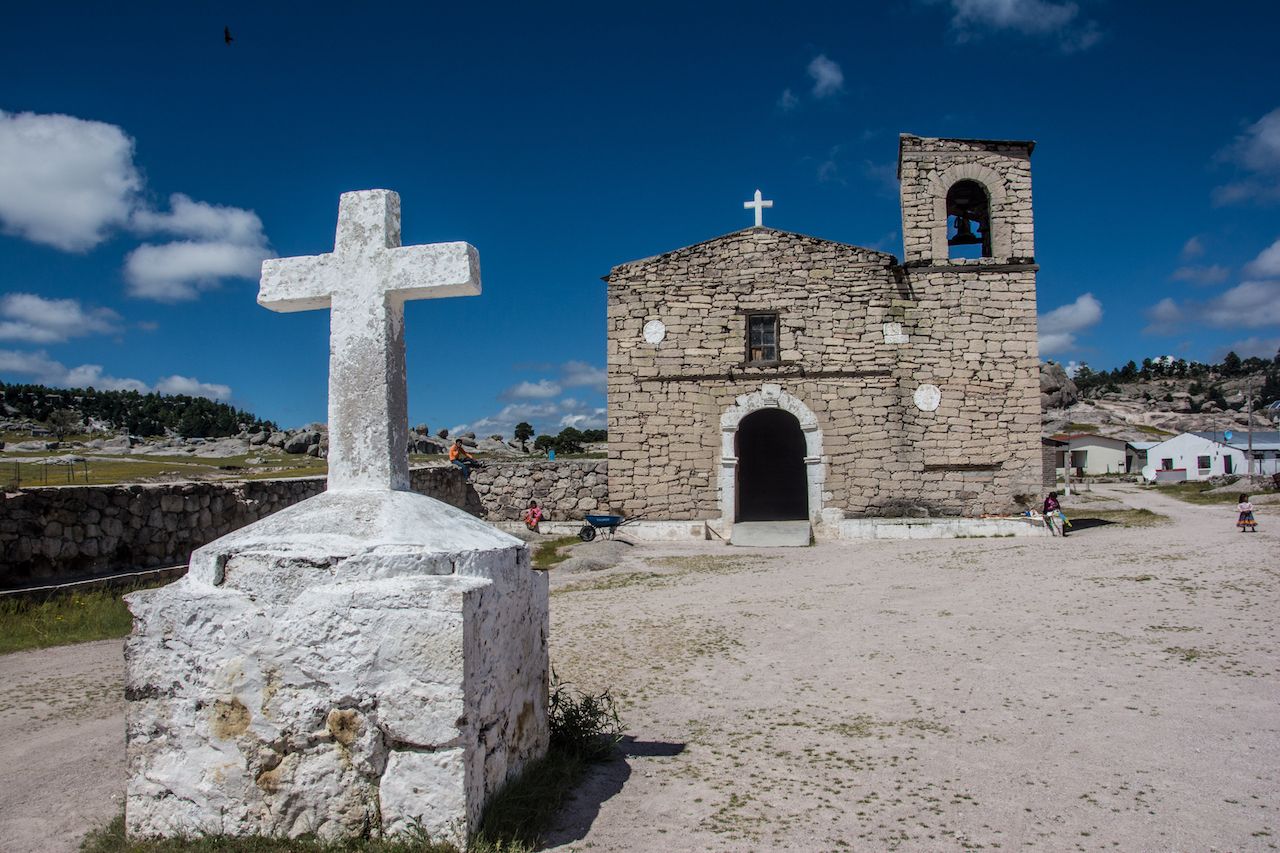 Most train passengers go directly to Creel, but Cuauhtemoc is worth visiting its large traditional Mennonite community. Most of the Mennonites live in campos, small settlements without names, characterized by one wide street, European-style homes, barns and immense fields and orchards. If you’d like to visit them, I advise you to book a tour that will take you to one of the cheese factories, the Mennonite Museum, the school, the church and a Mennonite home where you can have a traditional meal. You can even buy a bag of freshly harvested apples and home-made cookies. 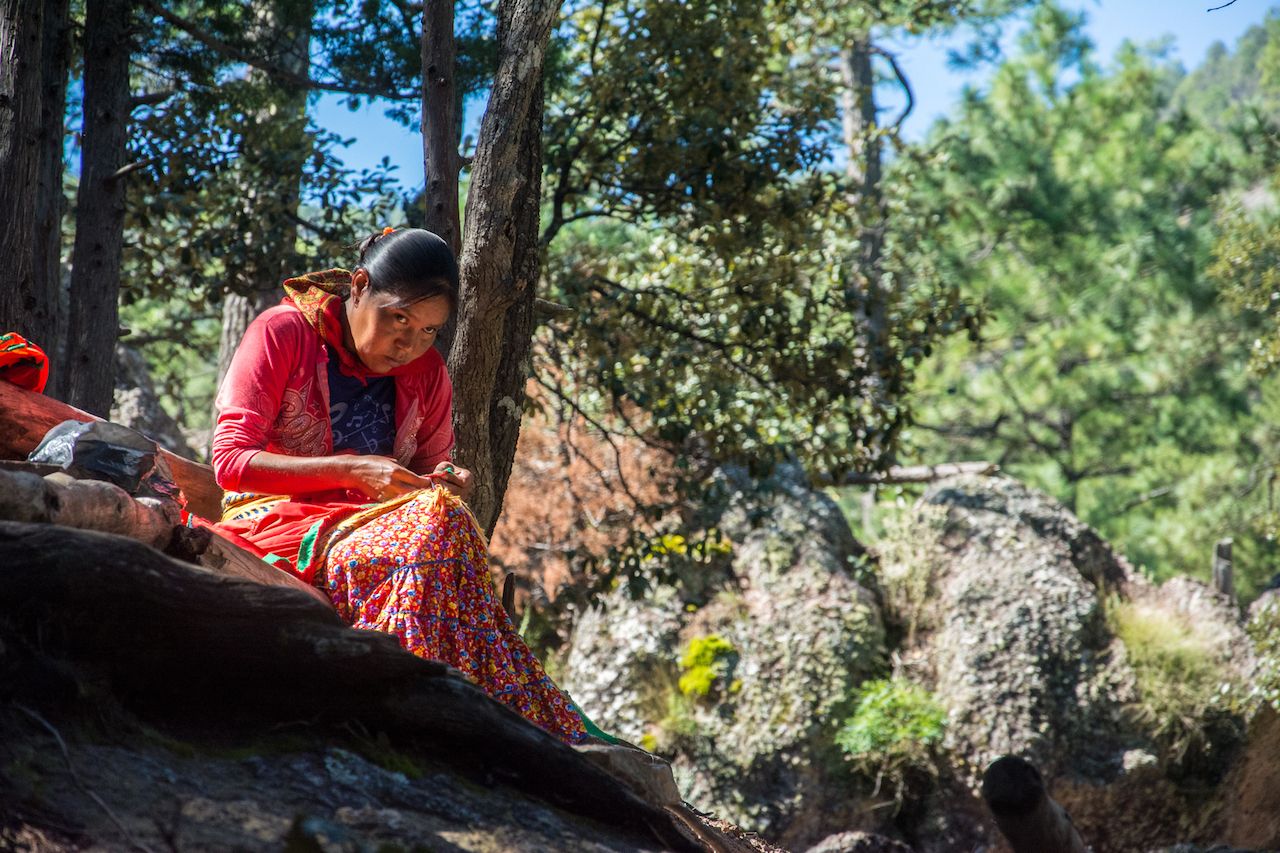 The first tourist stop inside the Sierra Madre Occidental is Creel, a village packed with hotels and tourists. Its main attractions are daily trips into the mountains to impressive pine woods, crags, caves, lakes, falls, rivers, and the homes of the indigenous Tarahumara. Although you might want to explore the surroundings all by yourself, I recommend that you book a tour via a hotel because of security issues and lack of public transport. I also highly recommend you choose the tour that takes you to Valle de los Hongos, el Valle de las Ranas, Misión de San Ignacio and Cusarare falls, with stops in two caves inhabited by Tarahuamara families. Another visit worth making is to the natural thermal spa Recowata. If you decide to visit Batopilas, on old mining town several hours from Creel, you can do it by public bus; however, you’ll have to spend the night there and return to Creel the next day. 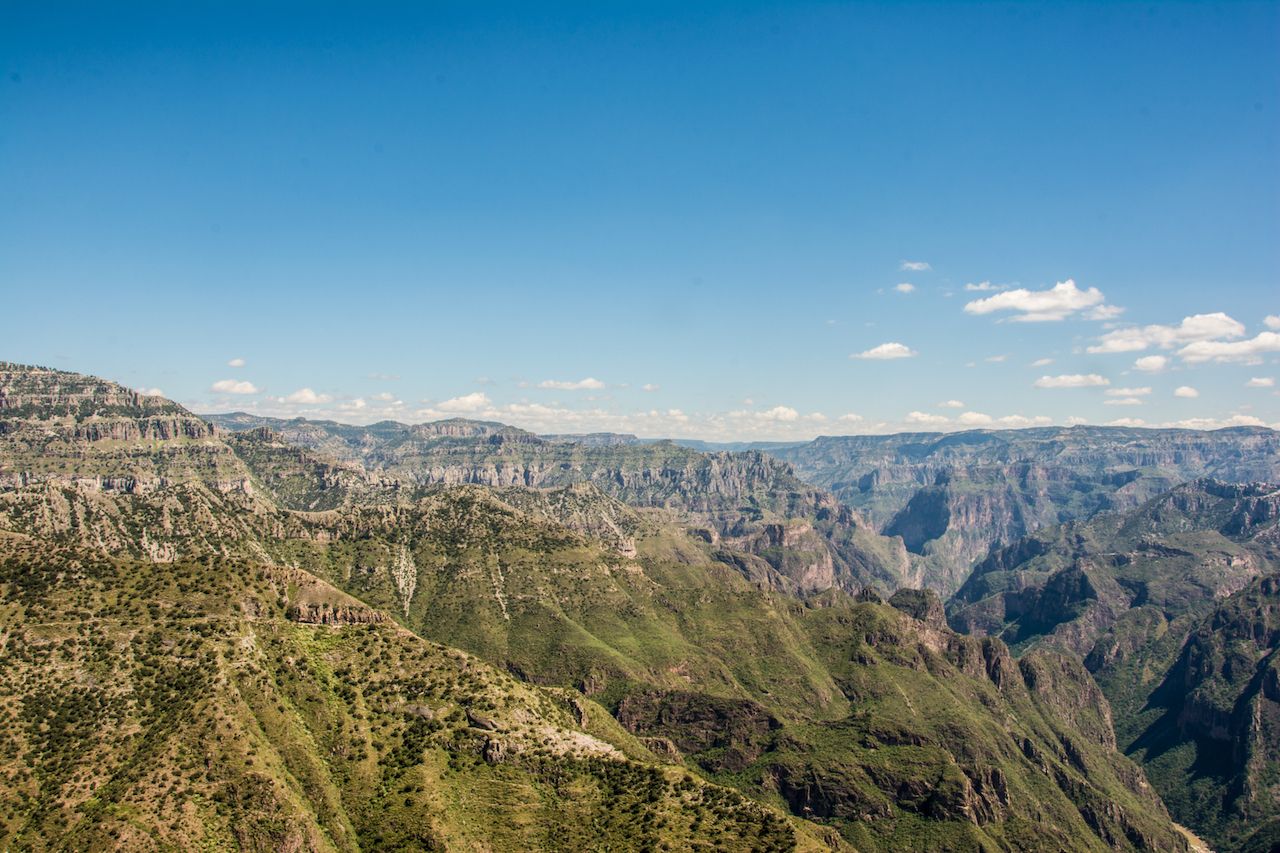 The Divisadero is situated in front of the Copper Canyon, offering impressive views. There’s a cable car for 60 people that transports you across the canyon in 10 minutes, lets you appreciate the view for another 20, and takes you back where you started. For the more adventurous travellers, there’s a zip line making the same trip. There are also many trails worth hiking, so make sure to wear good shoes, a hat, and take some water. In the train station, there are numerous stands with Tarahumara people selling handicrafts and food. Try gorditas, tortillas made of blue corn and stuffed with meat, pumpkin flowers, or mushrooms.

The train stops in Divisadero for about 15 to 20 minutes which is not enough to appreciate it fully. I recommend that you stay in Creel and make a day trip to Divisadero by public bus. Another option is to hire a tour at your hotel that takes you to Divisadero early in the morning, stay there for a few hours, and board the train at 2 PM to head towards Bahuichivo. The most expensive option is to stay at the hotel Posada Barrancas, 4 km away from Divisadero.

This train stop is about 45 km away from the village of Cerocahui, so if you intend to get off the train and stay for the night, make sure to have a reservation in one of the hotels. The owners will send a car for you since there is no regular public transport that takes you to the village.

Cerocahui is a small community set in the heart of Sierra Tarahumara. The view from Mirador Cerro del Gallego Cañón de Urique is worth staying there — you can observe Urique Canyon, the deepest one along the route. You’ll need to book a tour, so ask for it in a hotel. Another option is to hike to the Cerocahuia falls; it’ll take you about an hour to get there. If you decide to visit it without a tour guide, always follow the left path. 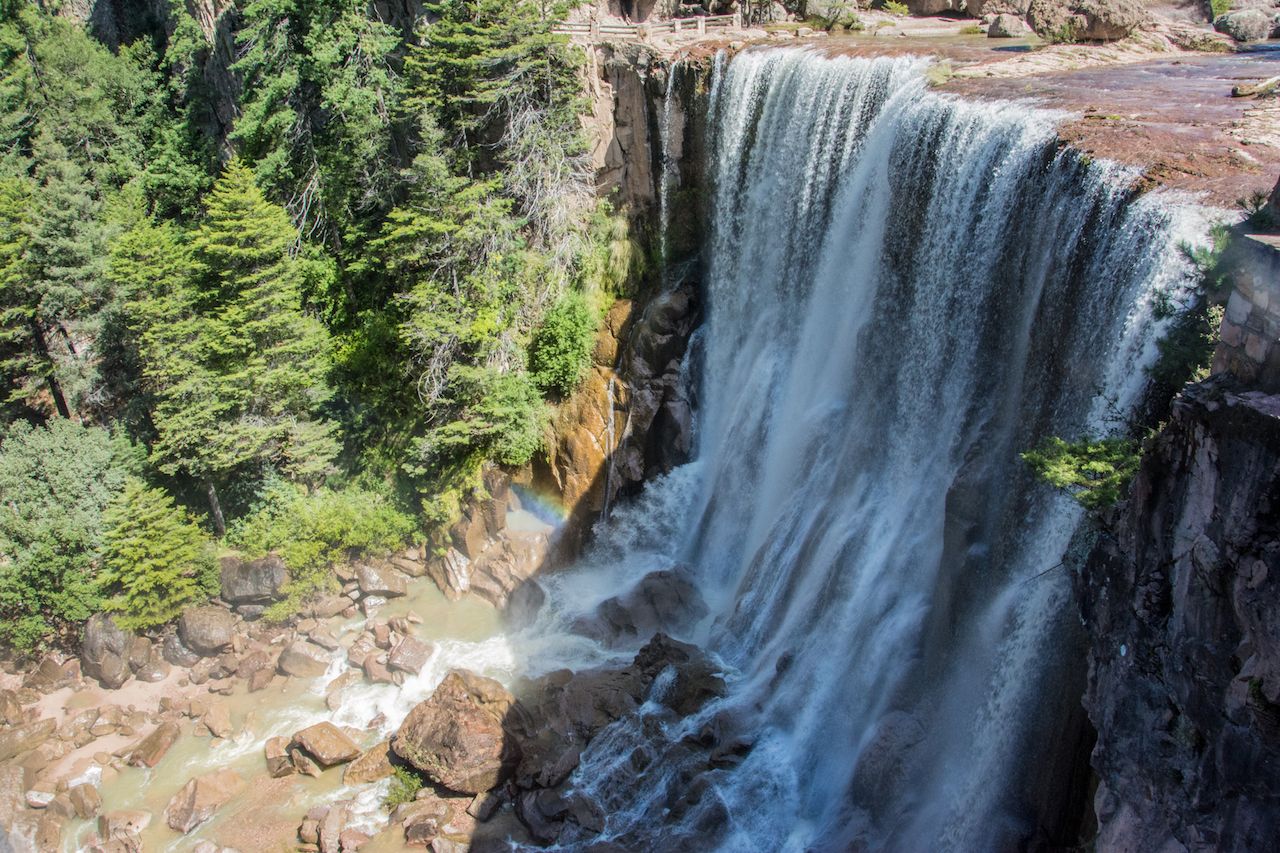 When you leave Cerocahui, make sure to have your camera handy and reserve a good spot beside the window. This part of the route is the most impressive one. The train crosses 686 tunnels, numerous bridges, waterfalls and canyons. 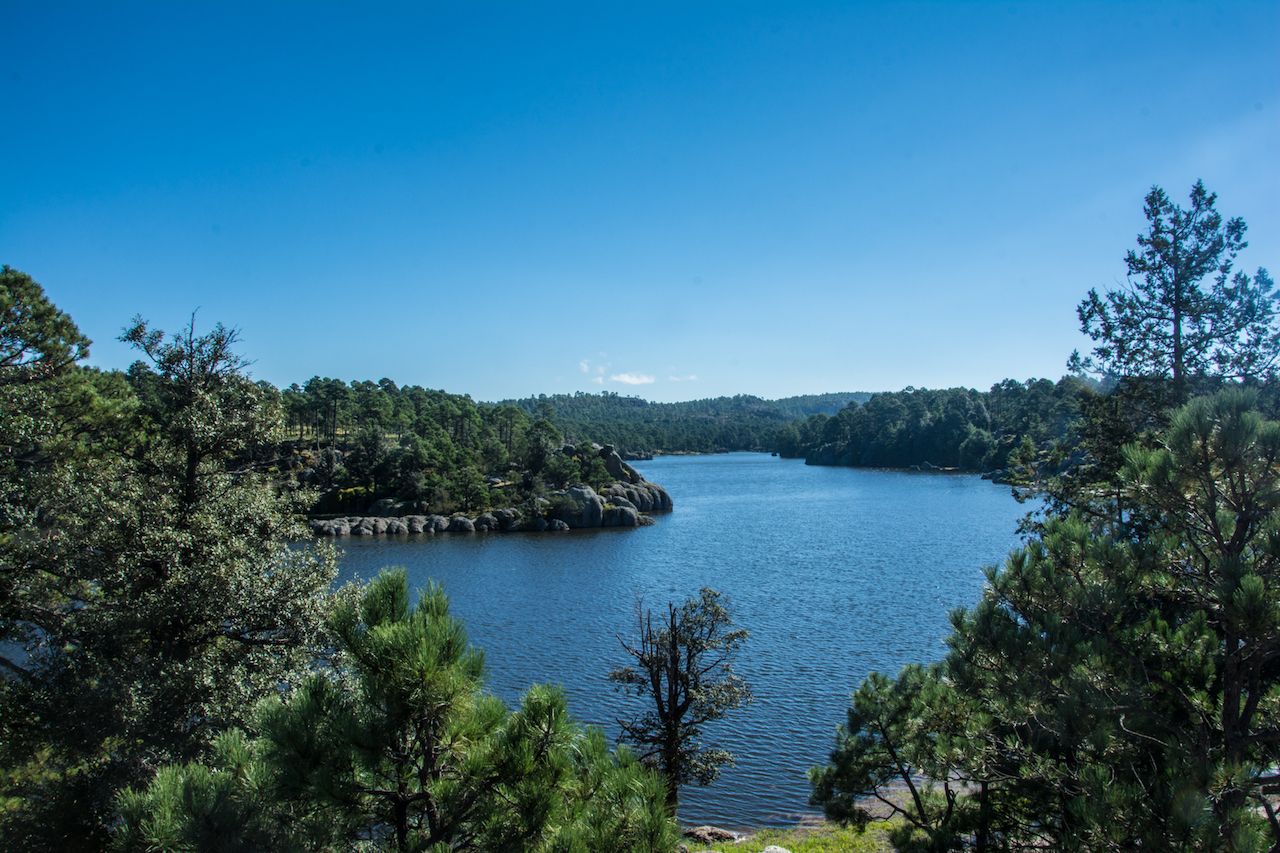 The first train stop in Sinaloa state is El Fuerte Centro, a small village and former mining center situated near El Fuerte river. Check out the Museum El Mirador and ask in your hotel or the tourism office for a boat trip on the river, but keep in mind that the climate is very hot and humid and that the temperatures never drop below 90°. There are also a lot of mosquitos.

Have a hotel reservation and a guaranteed transport to the center. Sometimes there are taxis waiting for unprepared travelers but they tend to get full quickly so you might stay without a ride.

The best part of Los Mochis is the nearby beach. You can go directly to Topolobambo, stay there or spend the night in Los Mochis, and take a bus to the coast. In Topolobambo, you can book a tour to the small island El Farrallon to observe sea lions and other marine animals. Ask for the tour in any hotel or take a walk to the dyke where tour providers offer the trip.

If you prefer eating excellent sea food and relaxing on the beach, go to Playa El Maviri. You can use public transportation from Los Mochis but have in mind that the last bus to the city leaves at 6 PM. After that, you’ll have to return in a taxi. Try the famous pescado zarandeado, a grilled fish marinated in a chili and herb sauce.

Travel12+ of the World’s Most Spectacular Train Journeys
Tagged
Insider Guides Mexico
What did you think of this story?
Meh
Good
Awesome