A new rail project in Mexico is good news for travelers in the Yucatán Peninsula who want to see more of the region in a fraction of the time – and who don’t want to rent cars or sit in traffic. But a recent proposed change to the route poses a risk to the world’s largest underwater cave system and surrounding jungle, both of which could be damaged or destroyed if the project moves forward.

The Maya Train, or Tren Maya, will cover 932 miles and run through five states in the southeastern part of the country: Chiapas, Tabasco, Campeche, Yucatán, and Quintana Roo. The project is led by Mexico’s National Fund for Tourism Development, also known as FONATUR — part of the federal government. One of the main goals of the Tren Maya is to connect more rural areas to tourist hotspots like Cancún, which will ideally bring tourism money to smaller communities and help them benefit from tourism-related economic opportunities. 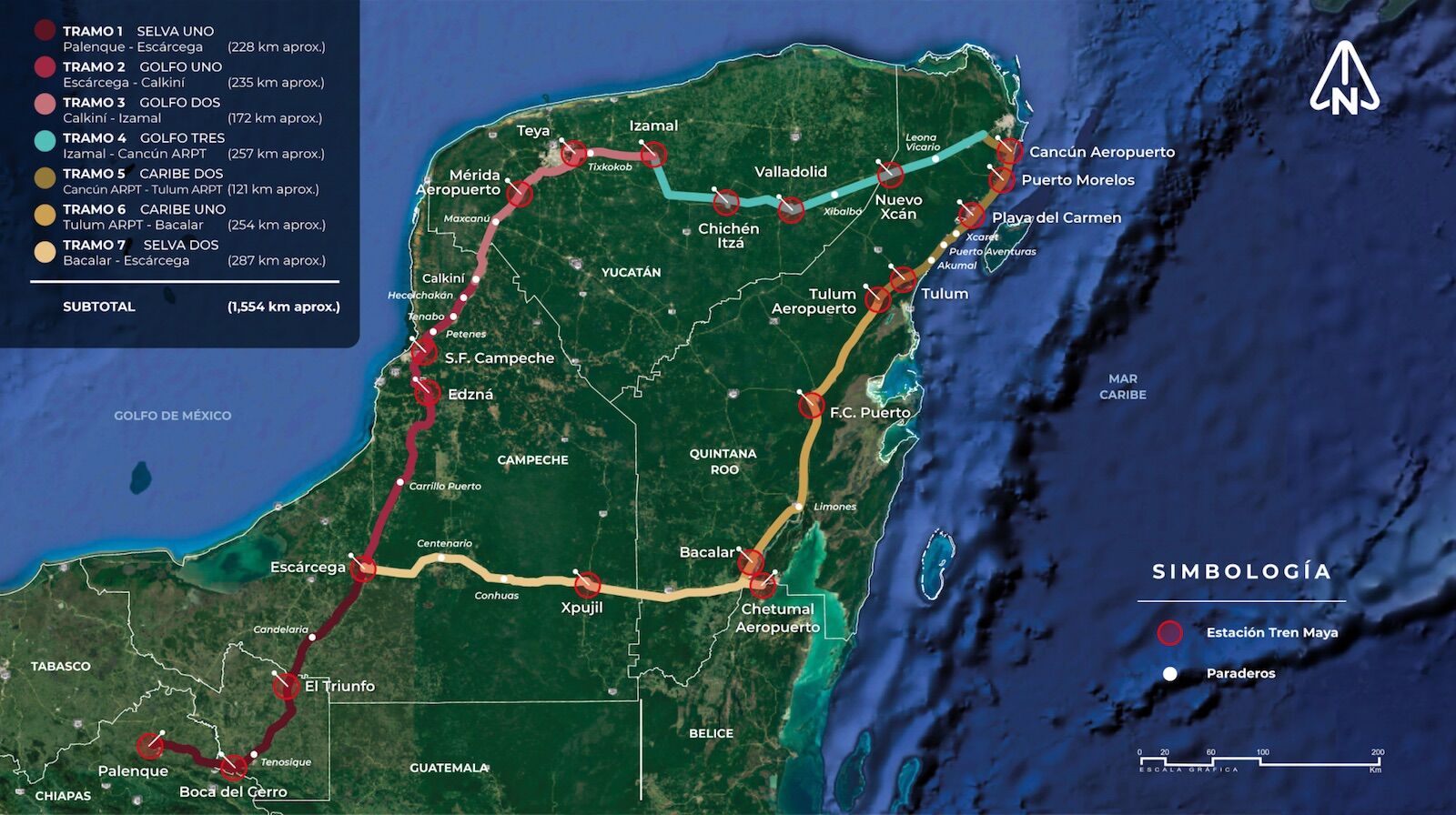 The full route of the Mayan Train. Photo: Tren Maya/FONATUR

Construction began in June 2020, roughly two years after Mexico’s President Andrés Manuel López Obrador announced the Tren Maya project. Though developers still claim the project will be finished by 2024, it’s currently a few months behind schedule. That may be because ongoing lawsuits from environmental groups have led federal courts to order construction pauses to protect sensitive ecological and cultural areas.

Environmental concerns over the Tren Maya 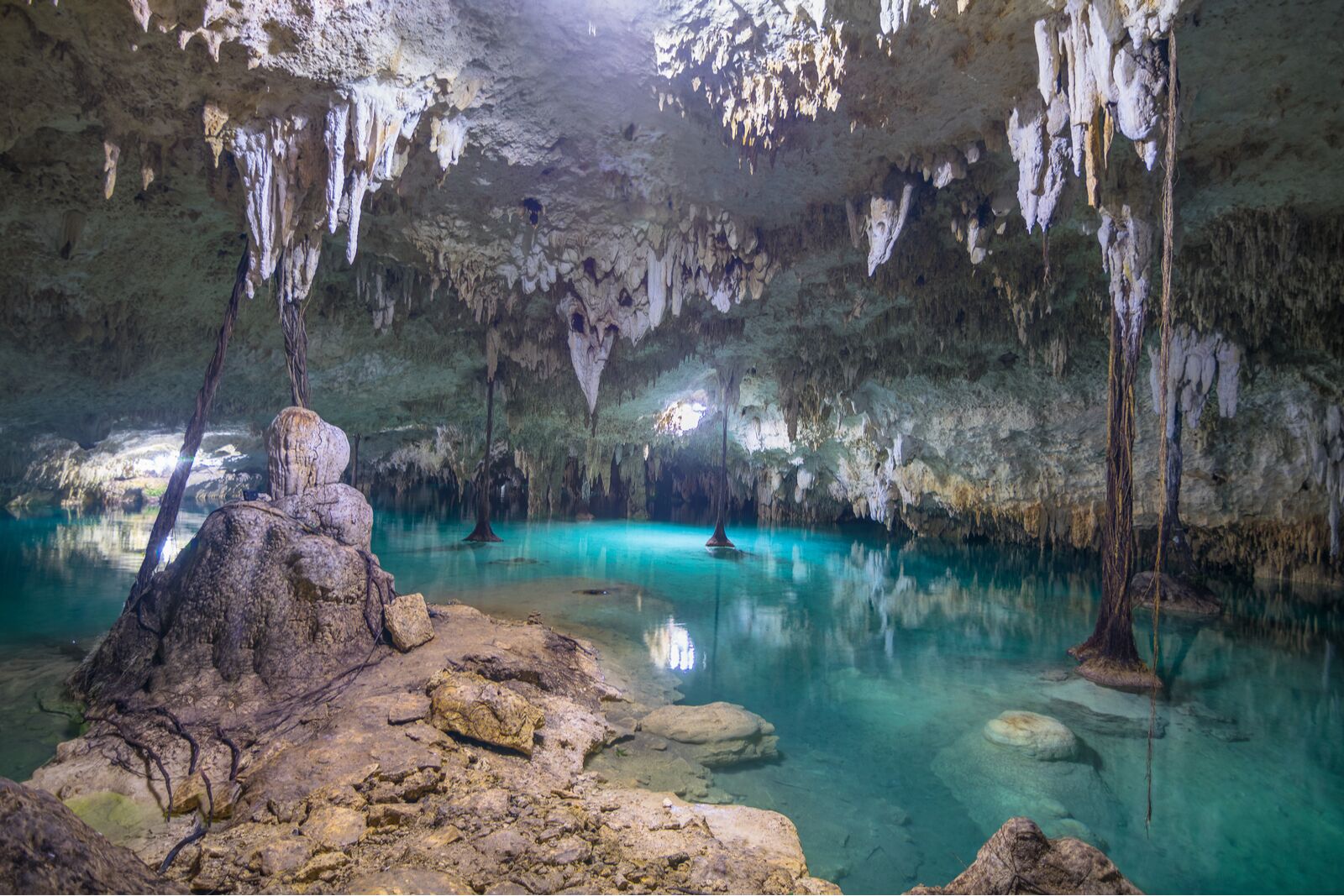 Cenotes like this are part of the larger cave system and are at constant risk of collapse and deterioration. Photo: Nido Huebl/Shutterstock

Most of the environmental concerns about the Train Maya come from a change announced in January 2022 on a section of the route running between Cancún and Tulum. The tracks were originally supposed to run parallel to the current four-lane highway on an elevated platform. But the new route goes inland, laying the track at ground level roughly 2.5 miles inland of the highway – putting them squarely in the dense Mayan jungle. The government gave several reasons for changing the route, citing concerns about potential traffic and highway interruptions during construction, potential lawsuits from private landowners along the route, and the high cost of construction in Playa del Carmen.

One of the most concerning aspects of the new route to critics is that it would pass over Sac Actun, the largest underwater cave system in the world. Most travelers and Mayans know the system best for its cenotes: natural sinkholes filled with fresh water. Mexico’s Yucatán Peninsula has the highest concentration of cenotes in the world. In addition to being a massive tourism driver, especially for scuba divers and snorkelers, cenotes are sacred to the Mayan people.

Mayans believe that cenotes are sacred as gateways to the underworld. Maya tradition tells that the god of rain, Chaac, lives at the bottom of the cenotes. This may explain the many archeological and anthropological artifacts found within the cenotes, which many researchers think were sacrifices to Chaac in hopes of rain and agricultural fertility. Fossils found within Sac Actun date back to the Ice Age and include the skeleton of Naia, believed to be one of the oldest and best-preserved skeletons ever found in the Americas. The fossils and discoveries have aided research into human history, and only a tiny fraction of the cave system has been explored so far. 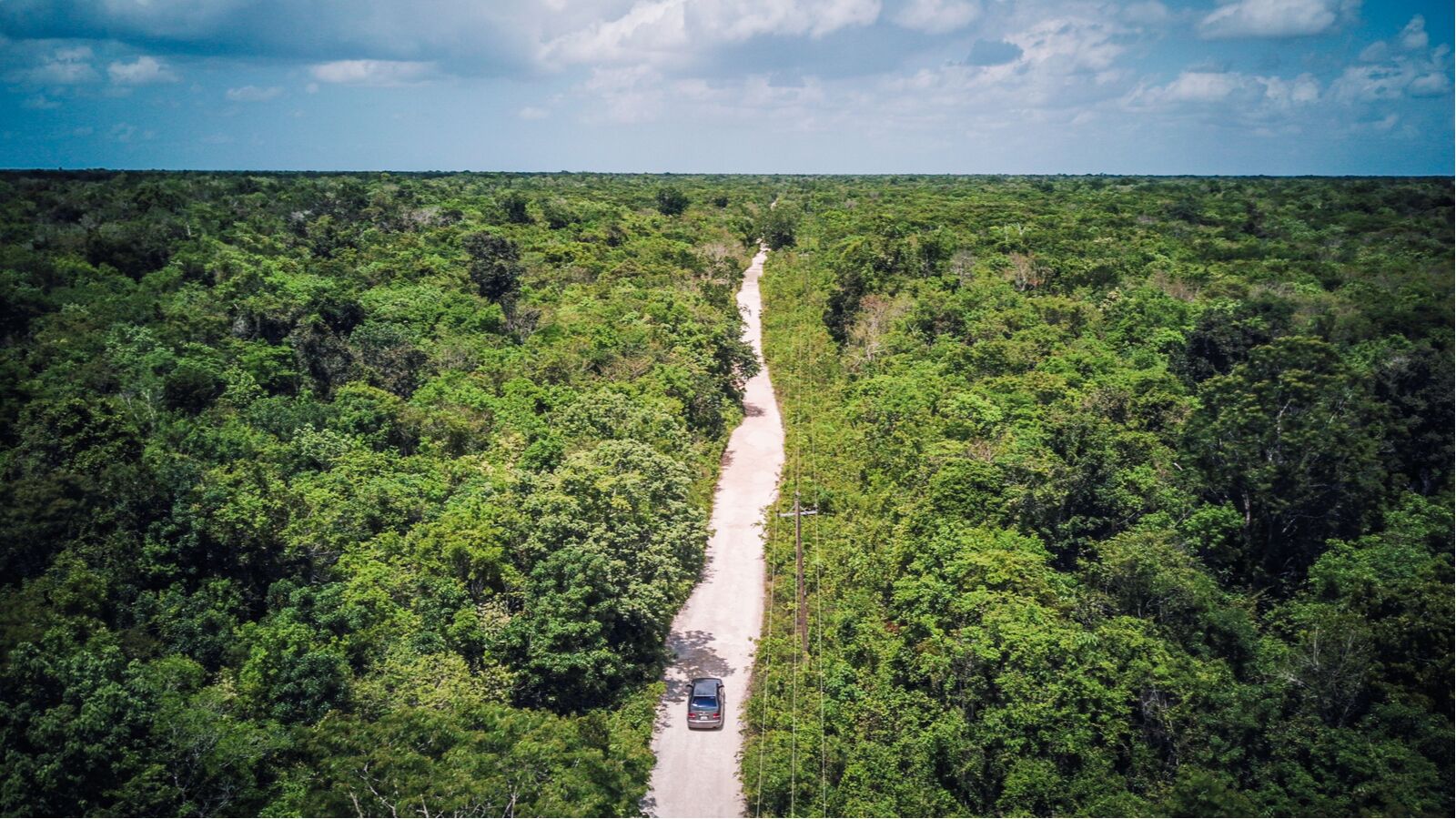 Much of the jungle just a few blocks in from Tulum and Playa is undeveloped and dense. Photo: Crystal Egan/Shutterstock

Environmentalists and cultural advocates are concerned that having the high-speed Tren Maya run directly above the cave system multiple times a day would put Sac Actun in danger of collapse. Environmentalists also point to concerns that the noise and vibrations will be significant, which will scare wildlife and change the area’s ecosystem and food web.

Despite the judicial blocks, the government has already cleared massive areas of jungle to accommodate the new route. That’s further driving ire among environmentalists, who say that President López Obrador already broke a promise he made in 2018: “No se va a tirar ningún árbol,” he said. “Not one tree will be knocked down.” Environmental activities predict that the train will require deforestation of more than 6,170 acres of jungle, leading to an extirpation (local extinction) of endangered species like the jaguar, howler monkey, and ocelot. Research on the cave system also shows that the cenotes are (via translation)” highly susceptible to contamination due to their geological composition].”

Cultural advocates are also generally against the new route, pointing to the cenotes’ historical and cultural significance. The cenotes were the Mayan people’s only source of freshwater and remain the only freshwater source for people living in the region. The country’s National Institute of Anthropology and History estimates that there are 2,288 archaeological sites in proximity to the route, many of which could be destroyed by a combination of foot traffic, construction, and environmental degradation.

The government announced the Tren Maya route change without an environmental impact assessment, something required by law for a project like this. The train has been called the “signature project” of President López Obrador, who has been criticized for pushing too hard to complete the train before his term ends in December 2024. Several significant courtroom challenges to the Tren Maya question its legality in light of failing to do the required environmental diligence. 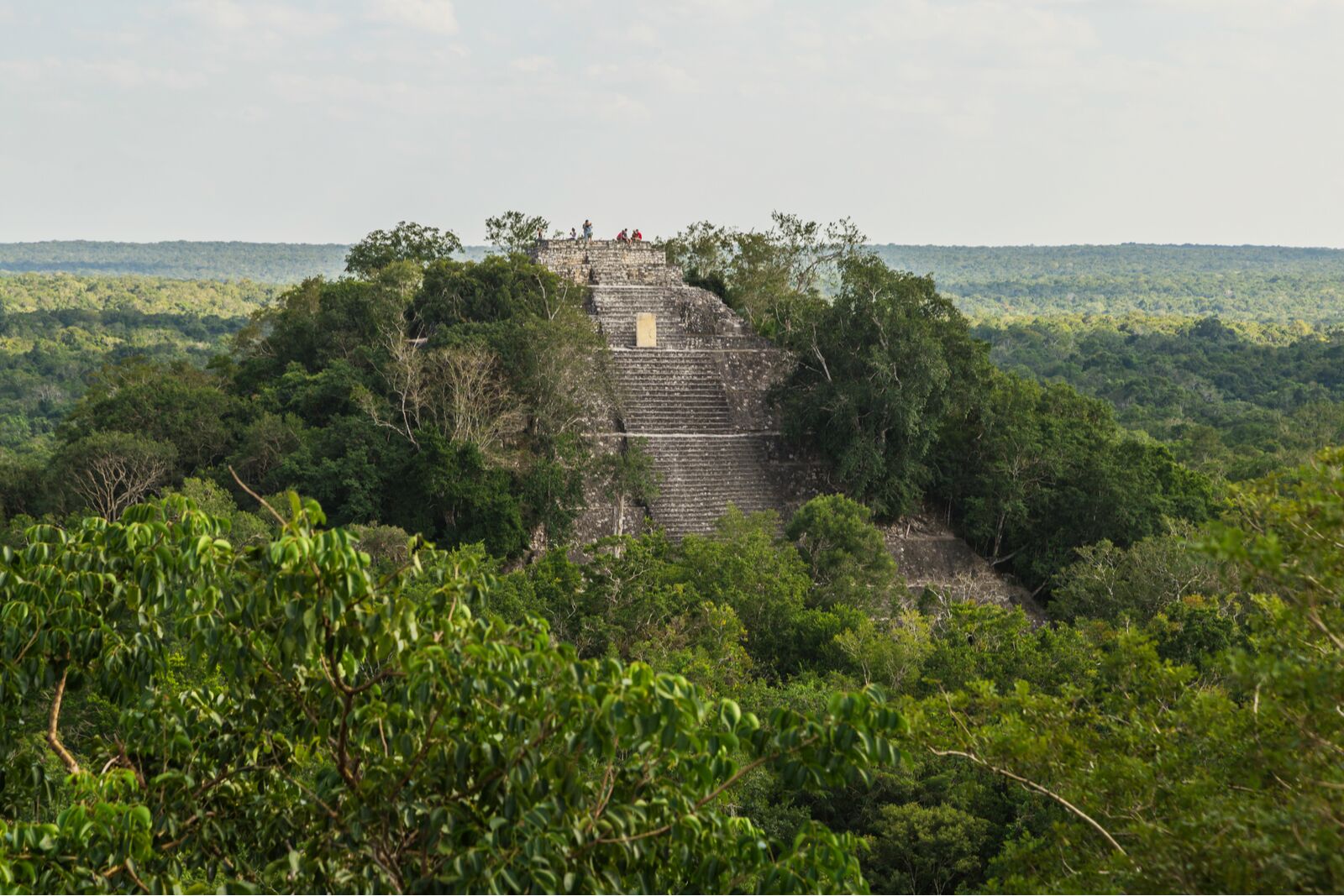 Calakmul is one of many Mayan sites along the train’s route. Photo: Iren Key/Shutterstock

A group called Tren Sobre Cenotes No, which means “No train over cenotes,” has organized several protests in Playa del Carmen and areas where deforestation is underway. Greenpeace advocates also chained themselves to construction equipment in late March in protest of the train.

Aside from environmental and cultural concerns, anti-train advocates also question the promised economic gains and whether they’ll benefit smaller communities. In an open letter to President López Obrador, Indigenous communities of the Yucátan Peninsula wrote, “It’s a tourism project that will only benefit the wealthy and foreigners. We, who are the owners of the land, will only see it pass by.” Some Mayan communities raised concerns over their ethnic name being used for something they don’t support.

The case for the Tren Maya 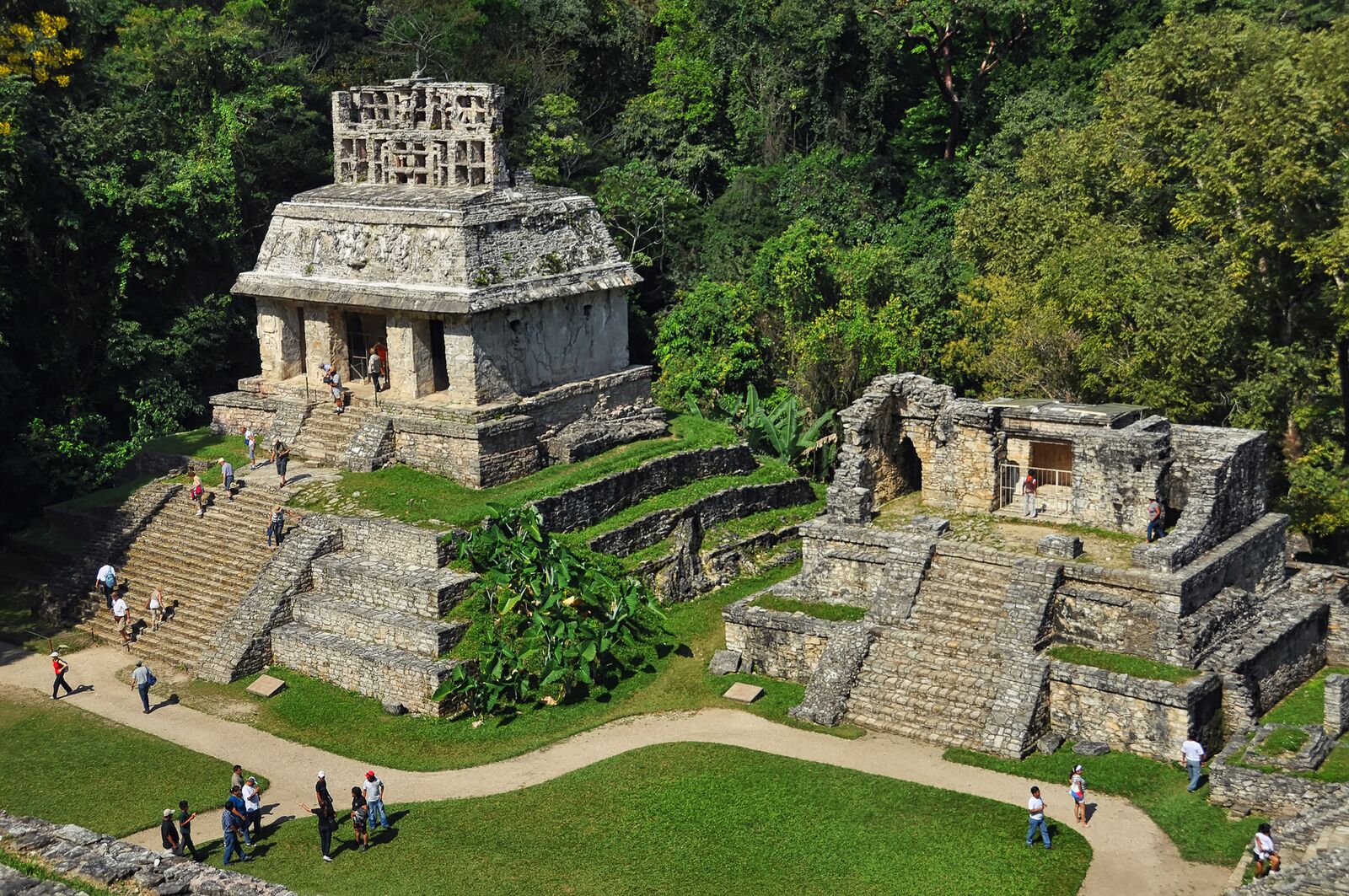 With the new train, destinations like Palenque will be much more accessible to tourists without any additional car traffic or pollution. Photo: Madrugada Verde/Shutterstock

However, not all locals are against the train. Many are in favor of it for the new jobs and economic opportunities it could bring. The United Nations Human Settlements Programme predicts that economic growth will double around the route and that poverty in the region will decline 15 percent by 2030. And given the poor quality of roads and heavy traffic in towns like Tulum, the Tren Maya could actually ease some of the over-tourism and environmental problems faced by popular towns along the route.

While critics argue that those positives don’t outweigh the negatives, proponents of the Tren Maya argue that the state needs to sacrifice some environmental protections to drive economic progress. Huge areas of the Mayan jungle were cleared beginning around the 1980s for mega-hotels and highways, and proponents say this is no different. Proponents also claim that the environmental concerns around potential cavern collapses won’t come to fruition and that the cenotes will still be open, healthy, and enjoyable for tourists and locals. The train will also speed up travel in the region, allowing passengers to go from Palenque (a Mayan ruin site in the state of Chiapas) to Cancún in four hours, rather than the current 10 it takes by car.

Many advocates against the new route are not necessarily against the entire Tren Maya project, but want an environmental impact assessment and reliable assurance that the government will protect the cave system before it moves forward.

Interest parties can learn more about both sides of the issue from the official page of the Tren Maya and from organizations opposed to the new routing, like the Mexican Center for Environmental Law or the Regional Committee for Cave Diving, Ecology and Regulation (CREER).

DivingA Surreal Look at the Underwater World of Mexico’s Cenotes
Tagged
Beaches and Islands Outdoor Sustainability Cancún, Mexico
What did you think of this story?
Meh
Good
Awesome