The start of summer just isn’t the same without the Triple Crown races. It feels downright unnatural not being able to show up to a local Derby Party looking like a colorblind Mr. Moneybags or wear a garish yellow sundress you only break out once a year. Even though those extravagant Derby hats are great social-distancing tools, the coronavirus pandemic has made the Triple Crown races impossible to hold in their traditional form.

The Kentucky Derby has been postponed until September 4, the Preakness to October 3, and the Belmont Stakes — typically the last of the Triple Crown races — until June 20 (without crowds). But just because you can’t go to the racetrack in person doesn’t mean you can’t pour one out for the Triple Crown at home and get in the spirit for when the races eventually resume.

Each race has an official signature cocktail that’s designed to make you seriously consider donning a striped purple suit and staking your last student loan payment on a horse with a cool name. They are, without a doubt, the most popular cocktails in horse racing. 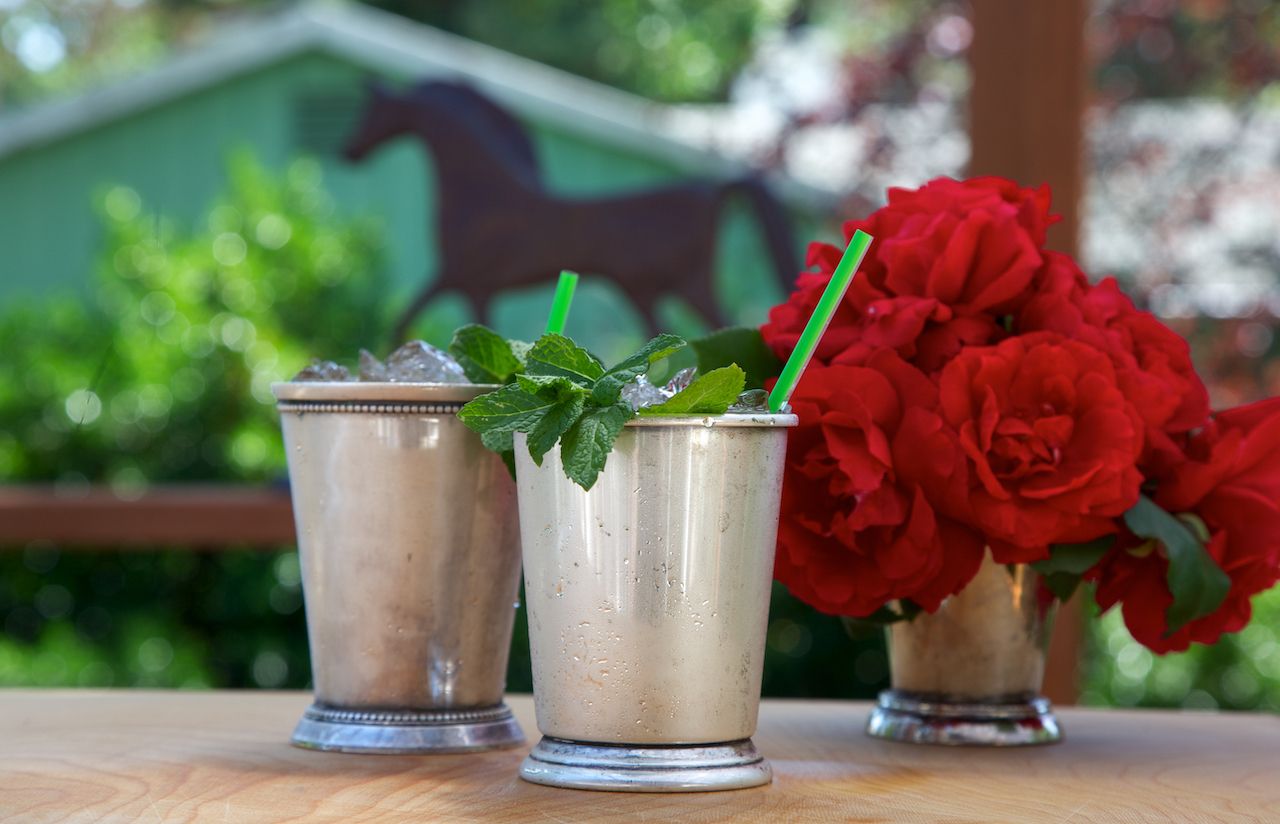 Much like the Kentucky Derby itself, the mint julep is the drink most widely associated with horse racing. It’s been popular in the American South since the late 1700s and was initially used as medicinal remedy for stomach aches. Mint juleps have always been surrounded by an air of wealth and prestige, as not many people had access to ice or pewter cups in the 18th century.

It was named the official drink of the Kentucky Derby at Churchill Downs in 1938. In a typical year, around 120,000 mint juleps are sold over a weekend, which requires 1,000 pounds of mint and 60,000 pounds of ice. The juleps are sold ready to drink in plastic, or classed up in pewter cups inscribed with the names of all the Derby’s previous winners (there’s also a $1,000 option). You probably don’t have one of those cups lying around your kitchen, but you can order one online.

For all the fanfare surrounding the mint julep, it’s actually a pretty simple drink to make. A typical recipe calls for bourbon — Churchill Downs uses Old Forester or Woodford Reserve — simple syrup, some mint leaves, crushed ice, and a mint sprig for garnish. 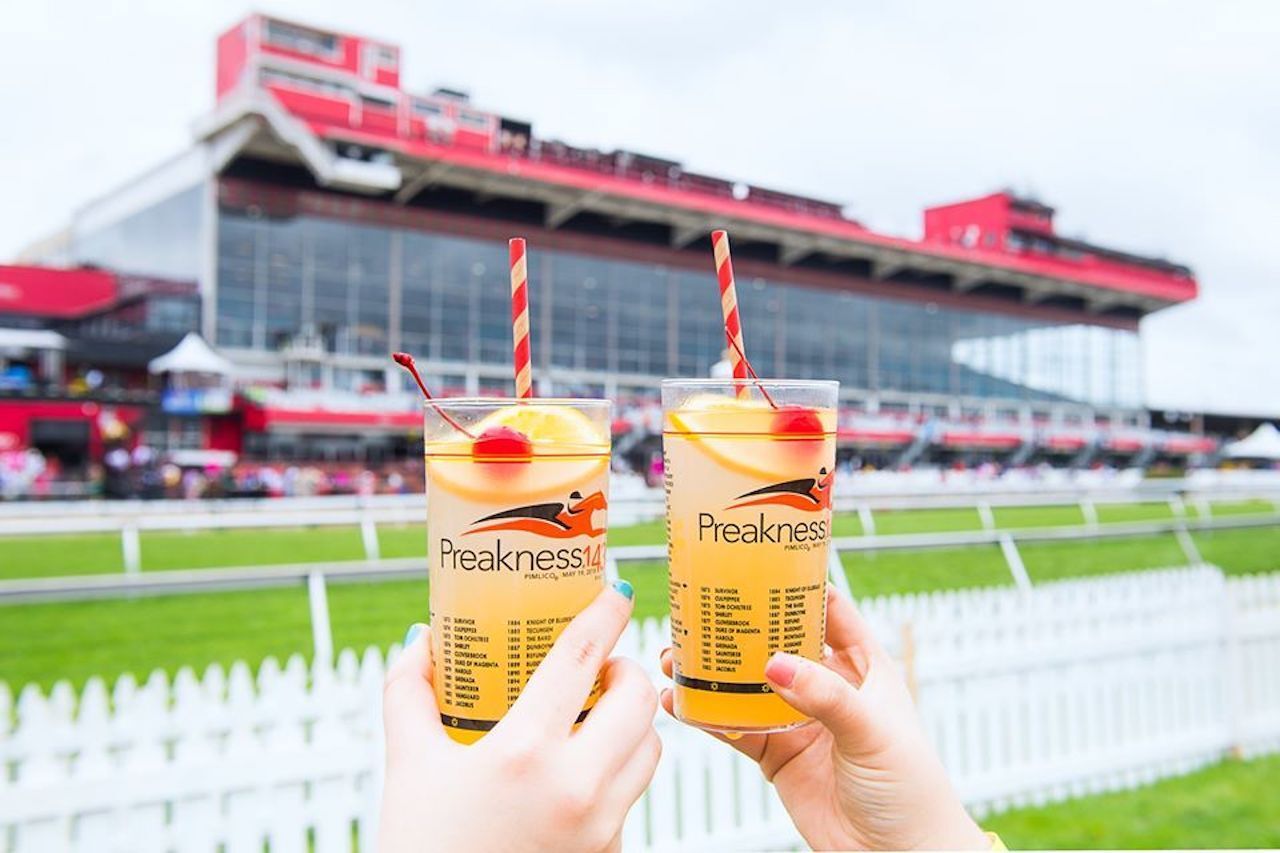 The black-eyed Susan has been the official drink of the Preakness Stakes since 1973, but unlike the mint julep, it’s yet to achieve truly iconic status. It’s undergone several iterations since it was first served at the Baltimore track. Early versions consisted of vodka, rum, and triple sec mixed with orange and pineapple juice. More recently, bourbon and sour mix make an appearance, as well as the occasional peach schnapps and grapefruit juice. Usually a cherry serves as the “black eye,” but some contemporary versions have substituted the cherry for a blackberry. As the Black-Eyed Susan has cycled through many identities over the years, it’s more of a novelty drink than true symbol of this leg of the Triple Crown.

The youngest of the Triple Crown cocktails, the Belmont jewel was born in 2011. It’s the oldest of the three races and dates back to 1868, but the jewel wasn’t the Stakes’ first signature drink. The Belmont Stakes has had not one, not two, but three official drinks throughout the 20th and 21st centuries.

At first, the Belmont’s official drink was the white carnation, named after the garland of flowers draped over the winning horse. That concoction of vodka, peach schnapps, orange juice, club soda, and a splash of cream lasted until 1997 when it was replaced by the Belmont breeze. The breeze was designed by renowned bartender and cocktail book author Dale DeGroff and was made with bourbon, sherry, lemon, orange, cranberry juice, and seltzer water.

The Belmont breeze lasted for 14 years but was eventually phased out in 2011 in favor of the Belmont jewel — a simpler drink thought to be more fan-friendly. The jewel, now coming up on its 10-year anniversary, is made with bourbon, lemonade, and pomegranate juice served on the rocks.