“You’re going to have to walk from here,” our cab driver said after her fifth attempt trying to turn up a steep, narrow driveway in the Tuscan countryside. We had just made the 25 minute journey from the center of Florence, Italy, to Bagno a Ripoli, a hilly, verdant comune a little more than four miles southeast of the city. As we stepped out of the cab and made our way up the driveway, Brunelleschi’s Duomo was still visible in the distance.

“Buongiorno e benvenuto!” we heard as we walked toward the farmhouse at the top of the small hill. There to greet us was Giulio Benuzzi, the man we came to see on that cool, sunny morning. Better known as Giulio the Truffle Hunter, we were meeting him for an excursion to find one of the most sought-after culinary delicacies in the world: Tuscany’s black truffles.

As we stepped into the farmhouse, his love for truffle hunting was clear. Artwork dedicated to the fungus, painted by Giulio himself, hangs on the walls. As he outstretched his hand to explain one of the works — a colorful, abstract piece depicting a man overlooking a tree with truffles at the end of its craggy roots — I noticed that even the large ring he wears is designed with an embedded truffle. 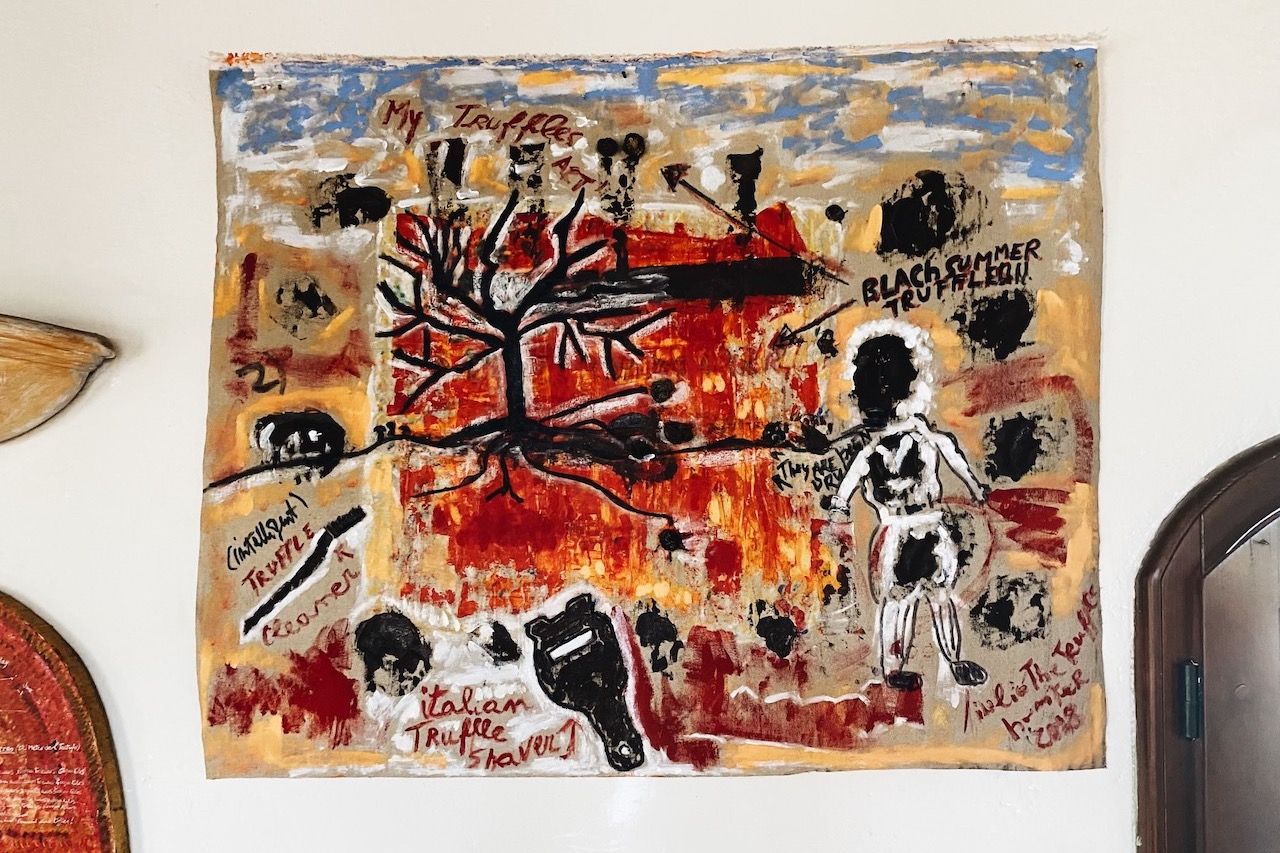 Giulio’s ardor for truffles goes back generations, and his grandfather brought him truffle hunting as a child. “I became a truffle hunter in 2003 and was one of the first to plan an experience like this,” Giulio said as we sat around a long wooden table.

While Giulio has been leading culinary excursions for decades, he recently partnered with Hotel Savoy Florence, a stylish property conveniently located in Piazza della Repubblica, to become the property’s exclusive “truffle concierge.” Guests can book the half-day experience directly through the hotel, which gives a taste of the Tuscan countryside without straying too far from the city center — a luxurious perk for anyone who’s interested in truffle hunting but also pressed for time.

It starts with a crash course on how truffles grow and the seasonal varieties. 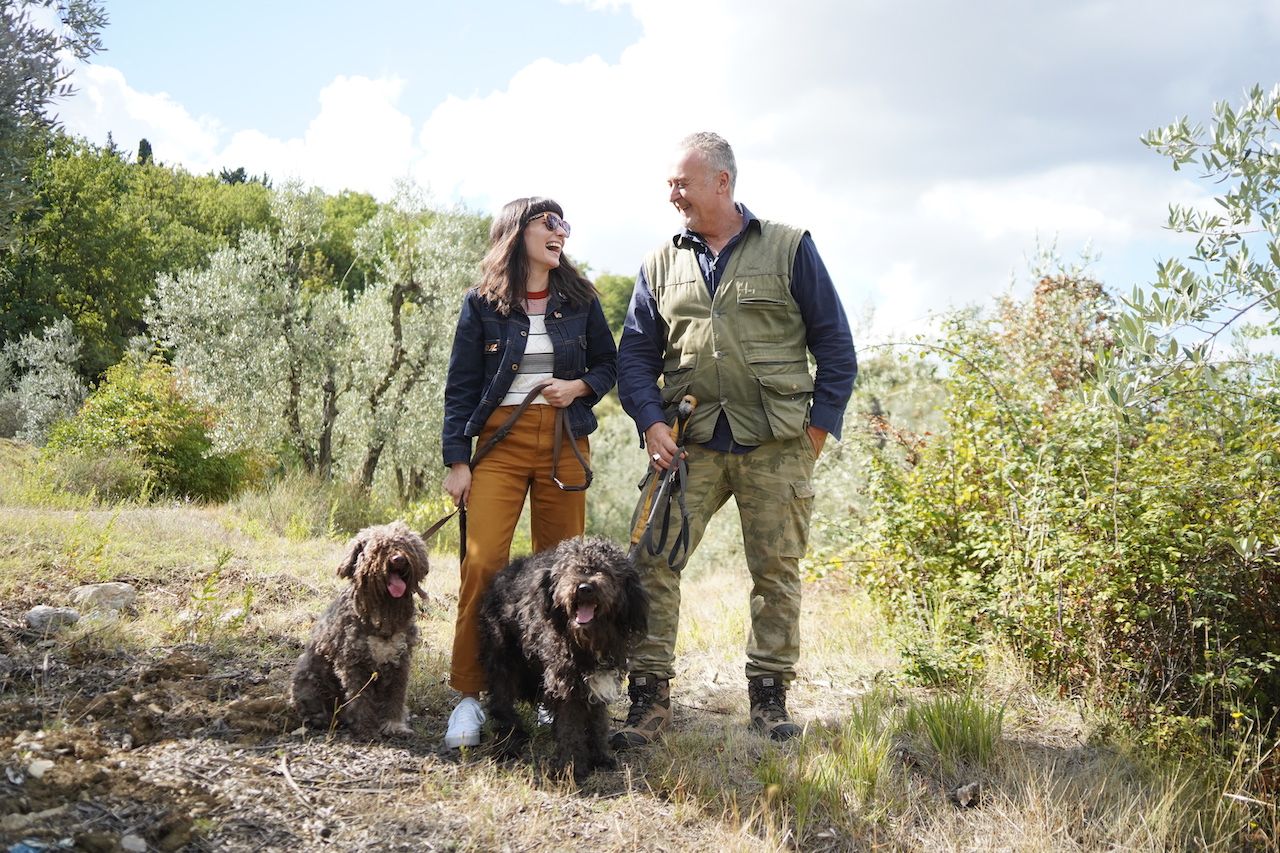 “I need to scout out about 150 to 200 hectares for each season, and it’s difficult to visit the same area more than twice in a season, which lasts two to three months,” he explained before heading out. Truffles grow underground in the shadow of trees, and they form a symbiotic relationship with the roots called mycorrhizae. Since they don’t grow in the same place every year, truffle hunters have to seek new trees every season.

When I visited Giulio in mid-September, black autumn truffle season had just begun. Nero pregiato (meaning “precious black”) truffles are typically found from September to the end of November, and sometimes they grow around the tree roots, taking on a curved shape. Giulio explained that the variety has a medium mushroom smell and are more rare than black summer truffles.

“The way you tell the difference between black truffles is the flesh,” Giulio said. “The darker the flesh, the better the quality. Black winter is black inside and it’s the best. Black autumn is mid-brown inside, and black summer is light brown inside.”

After our truffle 101 discussion, it was time for the main event. Giulio disappeared into the garden to fetch his two Lagotto Romagnolo dogs, Maga and Scott. Maga has been hunting truffles with Giulio for about four and a half years, and newbie Scott has been training for about one year. Curly and energetic, they greeted us exuberantly on the porch while Giulio laced up his shoes. 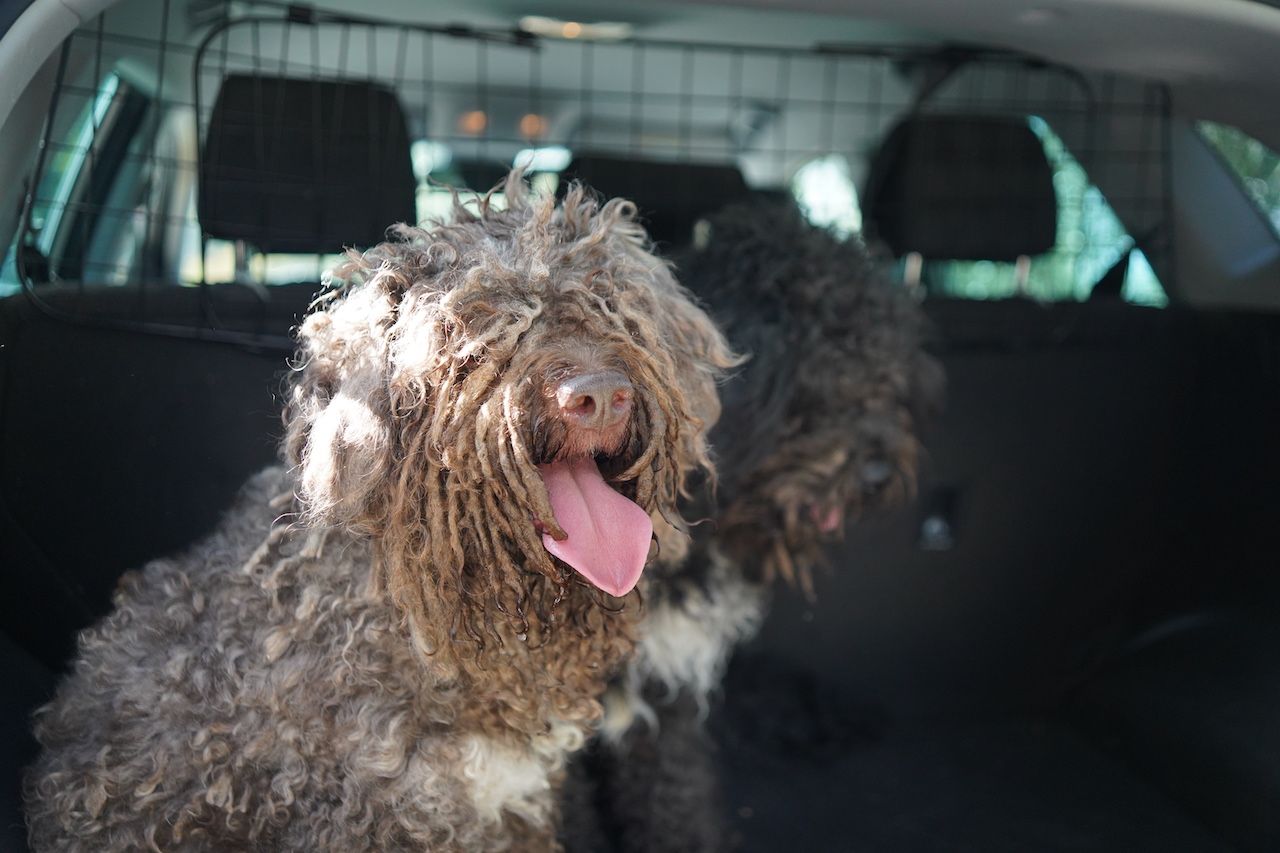 We secured the dogs in the back of Giulio’s SUV and took a short drive up the hill to begin our excursion.

“When truffle hunting, the dog does 70 percent of the work and the human does 30 percent,” he explained. “The human has to know where to go, or the dogs would never find [the truffles].” We stopped for a moment to snap photos of beautiful Florence in the distance before stepping into the woods. And then the hunt was on.

“A truffle spore grows in 24 to 48 hours, then needs about three months to mature,” Giulio said as he led Maga through the trees, with me and Scott following closely behind. “The dogs can only smell them when they are ripe because that’s when they release gas.”

A lot of people associate pigs with truffle hunting, but they’ve been banned in Italy since 1985 because they were tearing up the forest. Plus, dogs are easier to train, have more endurance, and are much easier to get in and out of your vehicle than a pig that weighs hundreds of pounds.

Suddenly, Maga veered off the path and started sniffing vigorously at the roots of a tree. “I think she found something,” Giulio said with excitement. “But we have to dig it up before she does because she’ll eat it.”

Giulio placed his foot over the spot and handed me his spade, a truffle hunting tool that’s designed with a metal, spade-shaped tip at the end of a wooden stick. He showed me how to carefully place the spade in the dirt at the right angle and push down on the handle to lift the truffle out of the earth.

“Two, oh my god!,” Giulio said as I lifted a duo of black autumn truffles from the forest floor. “Brava!” he said to Maga as she looked up at him proudly. Giulio inspected the truffles by pressing them lightly between his fingers and holding them close to his nose for a whiff. After deciding that one of the truffles was too old to use, he tossed it to Maga as a reward for a job well done. 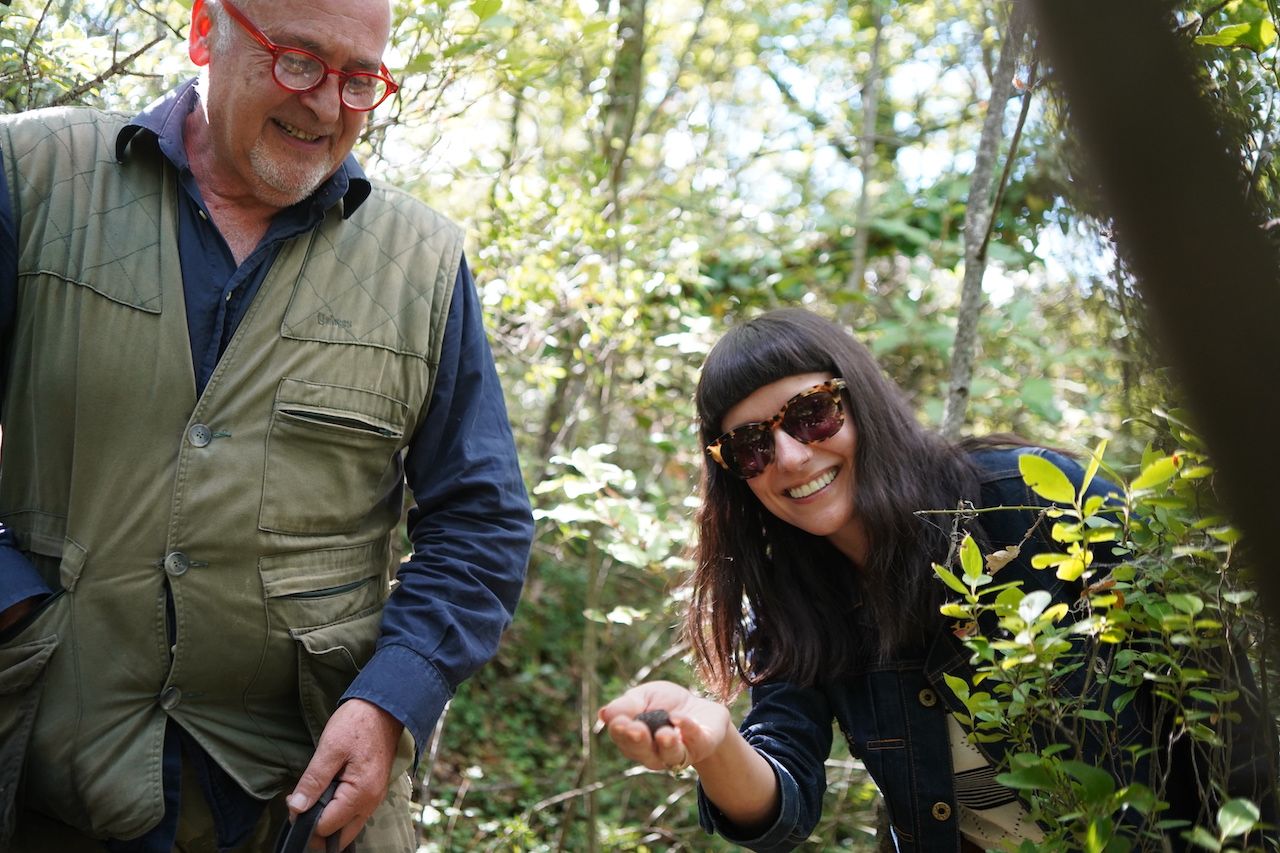 Maga led us to one additional truffle before we retreated from the forest to enjoy lunch at Giulio’s. This special part of the Truffle Concierge experience started with Giulio pouring us glasses of sparkling wine while we snacked on pizza fritte (fried pizza dough), lonzino (a cured pork loin meat) his neighbor made, and an aged cheese speckled with Giulio’s truffles. That trio of antipasti was one of the most succulent and satisfying things we ate during our time in Italy — I mean it when I say I can’t stop thinking about it. We all chatted and Giulio sang while he prepared a buttery linguine. He poured one of his favorite red wines and served us hearty bowls of pasta, topped with copious amounts of shaved black autumn truffles. 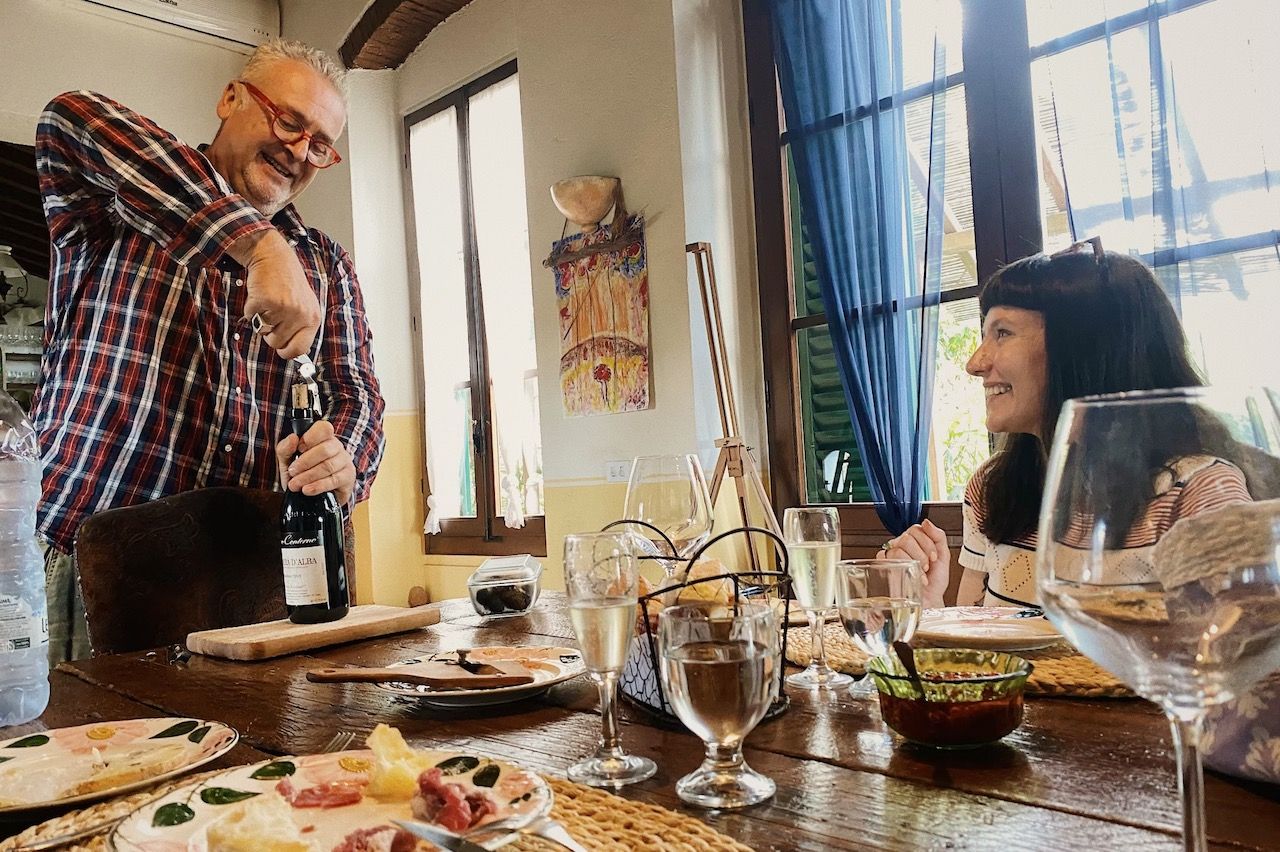 As we ate, Giulio played a couple of songs from a truffle musical that he dreamt up, which is coming to life this November during a four-course dinner with live entertainment at Hotel Savoy’s restaurant, Irene. It’s clear after spending a few hours with him that he’s enthusiastic about truffles, but in his heart of hearts, he’s an entertainer.

We left our truffle hunting excursion full and satisfied with having found one of the most sought-after delicacies in the world—and completely joyful after hanging out with such a charismatic character who’s passionate about teaching the truffle way.

Visit Hotel Savoy for more information on Giulio the Truffle Hunter and the Truffle Concierge experience.

Food + DrinkThe Difference Between White and Black Truffles
Tagged
Food + Drink Lux Travel
What did you think of this story?
Meh
Good
Awesome

7 Fascinating Artisan Shops You Must Check Out in Florence

6 Historical Adventures and How To Conquer Them Today

How To Totally Botch Your Trip To Florence