The humble burger is America’s favorite sandwich. It’s the go-to basic meal for quick grilling sessions, the menu item at the center of some of the largest fast-food chains in the world, and a favorite menu item when chefs want to elevate a familiar dish. Yet the burger isn’t just an American phenomenon.

At its most basic, today’s burger is a type of sandwich with ground meat in between two buns. There are classics, like Jimmy Buffett’s “Cheeseburger in Paradise” made with lettuce, tomato, Heinz 57, and French fried potatoes, as well as meatless burgers. Pretty much wherever you can find buns, you can find a type of burger. Usually, the only difference is what’s inside, but some cuisines have distinct variations that stand out from the standard American fare.

Consider these burger variations from around the world as inspiration to up your next barbecue.

Note: While searching for types of burgers around the world, you will no doubt come across plenty of stunt burgers. You know these: ramen burgers, okonomiyaki burgers, doughnut burgers, Twinkie burgers, etc. Here, we focus only on styles that make regular menu appearances. 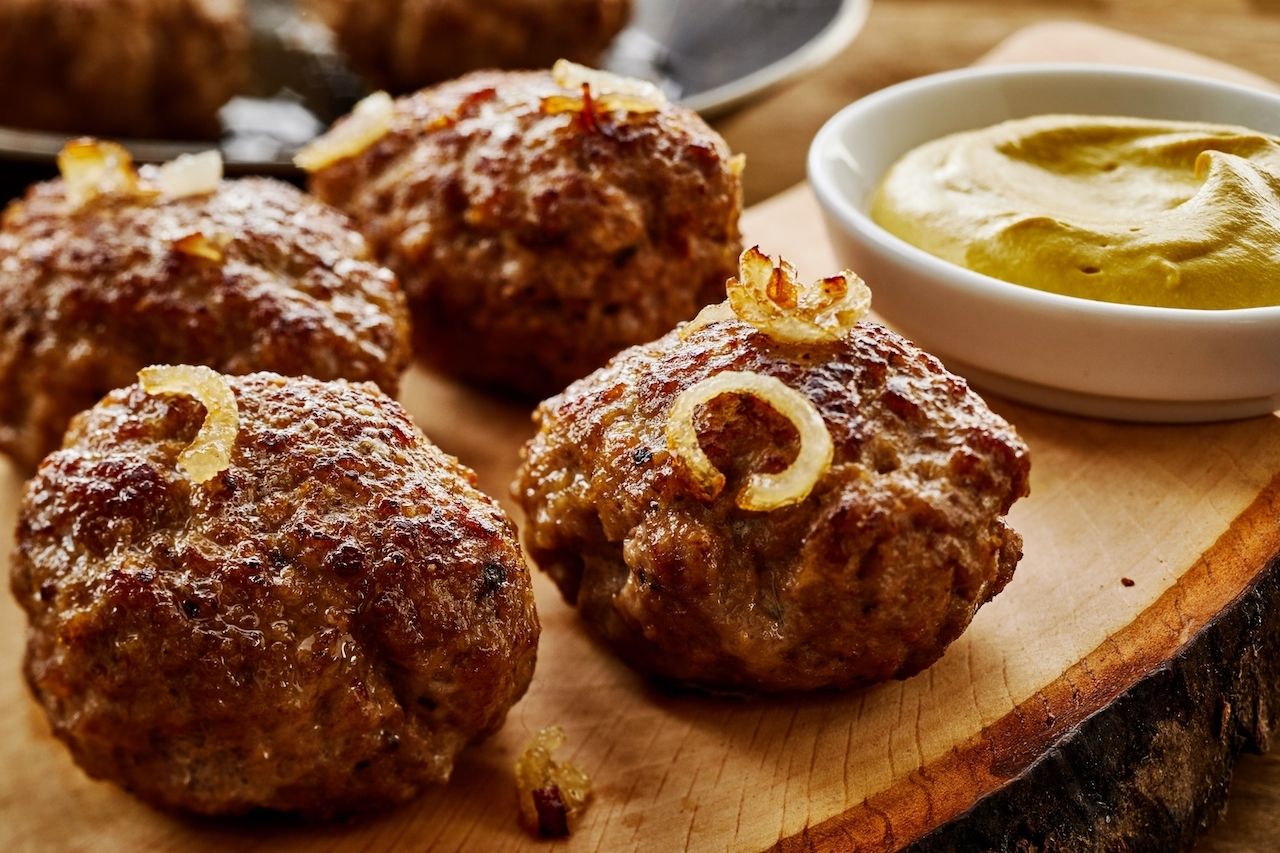 The ur burger itself. Depending on the region of Germany, it’s known as a buletten or a frikadellen, but outside of Germany it’s called a Hamburg steak. While the Hamburg steak has no buns (though it is often served with soft rolls called brötchen), it gets a pass because of its status as the dish that influenced all burgers. Hamburg steaks are from Hamburg, Germany, and are made with minced beef and spices and served as a patty that looks like a slightly flattened meatball. Consider it not just the original burger, but the original bunless burger as well. It’s believed that the idea for the dish came from Russian sailors who brought steak tartare (raw minced meat mixed with spices) to the port of Hamburg in the 1600s. The cooked version likely made it to America thanks to immigrants from Europe leaving from the very same port of Hamburg. In New York City, where many immigrants landed, “Hamburg-style” steaks appealed to Germanic tastes.

Today, Hamburg steaks are just as popular, if not more, in Japan as they are in Germany, though the steaks in Japan are often made with a high pork-to-beef mixture. 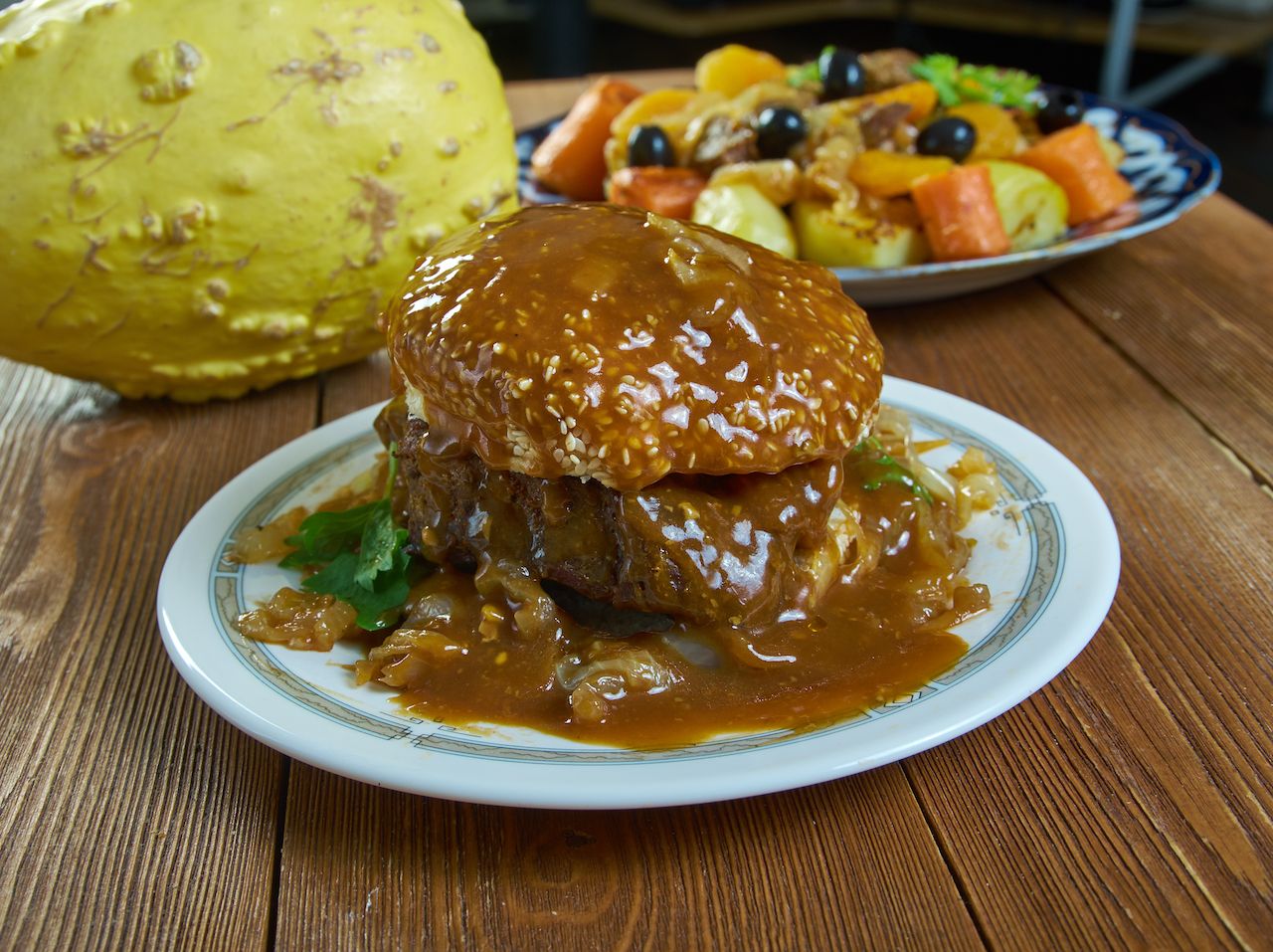 A bøfsandwich (“beef sandwich”) is made with spiced ground beef in between bread, and it’s a common street food item. Ketchup, mustard, remoulade, raw and cooked onions, and pickles are typical additions between the buns. The main thing that makes Denmark’s bøfsandwich stick out is how it’s plated and eaten: The bøfsandwich is served swimming in gravy, which eliminates the on-the-go handiness that makes burgers so easy to eat in the United States, but adds an extra level of savory meatiness.

In Canada, a similar gravy soaked burger is called the hot Hamburg sandwich. 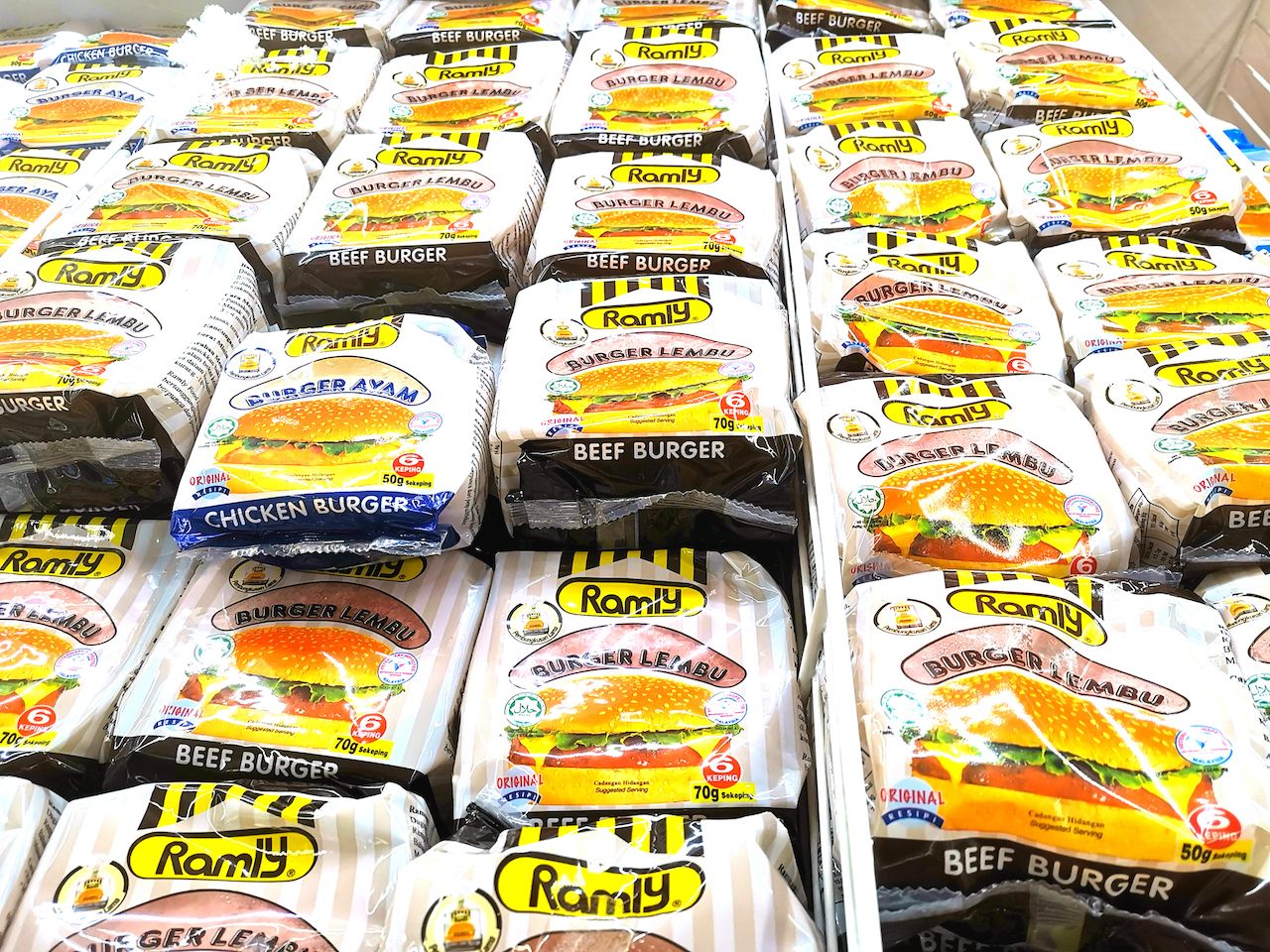 A Ramly burger is a meat patty that’s spiced with black pepper sauce and Maggi, cooked, and then placed on a thin layer of egg that’s been cooked on a flat surface. The egg is maneuvered to completely cover the patty, kind of like an omelet. Finally, the meat-in-an-egg-blanket is covered by a bun with cheese and other condiments of choice.

The burger gets its name from the popular Ramly Burger fast-food chain, and you can find the egg-wrapped burgers at street stalls and in the frozen food aisles of grocery stores. 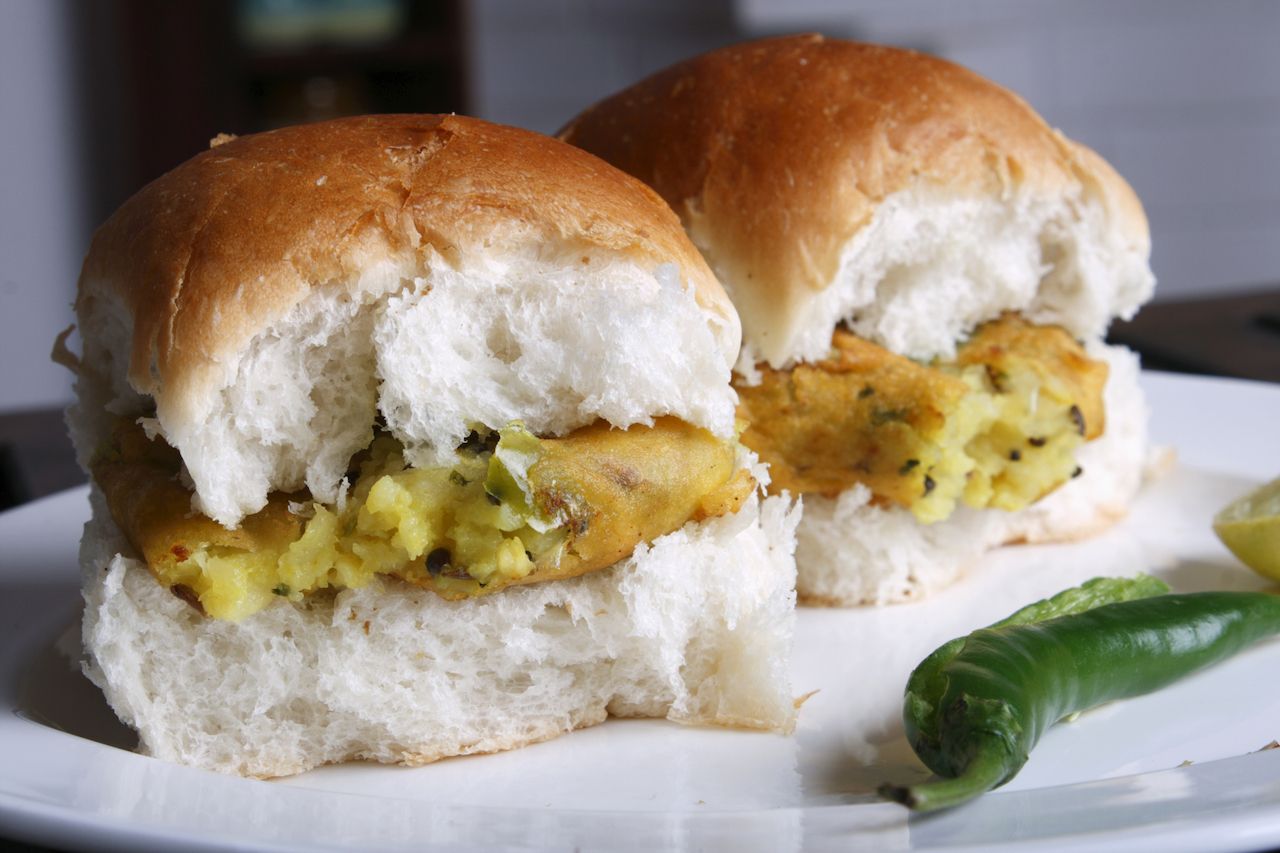 If veggie burgers fall into the wider category of burgers, then vada pav should be considered a leader in the realm of veggie burger sliders. This Mumbai snack is made with a ball of mashed potatoes that’s spiced and covered in chickpea flour before being fried and put in a chutney-covered bread called pav. The soft bread and potatoes come from the Portuguese, who colonized western India for centuries. Today, pav is an important component of Mumbai street food. 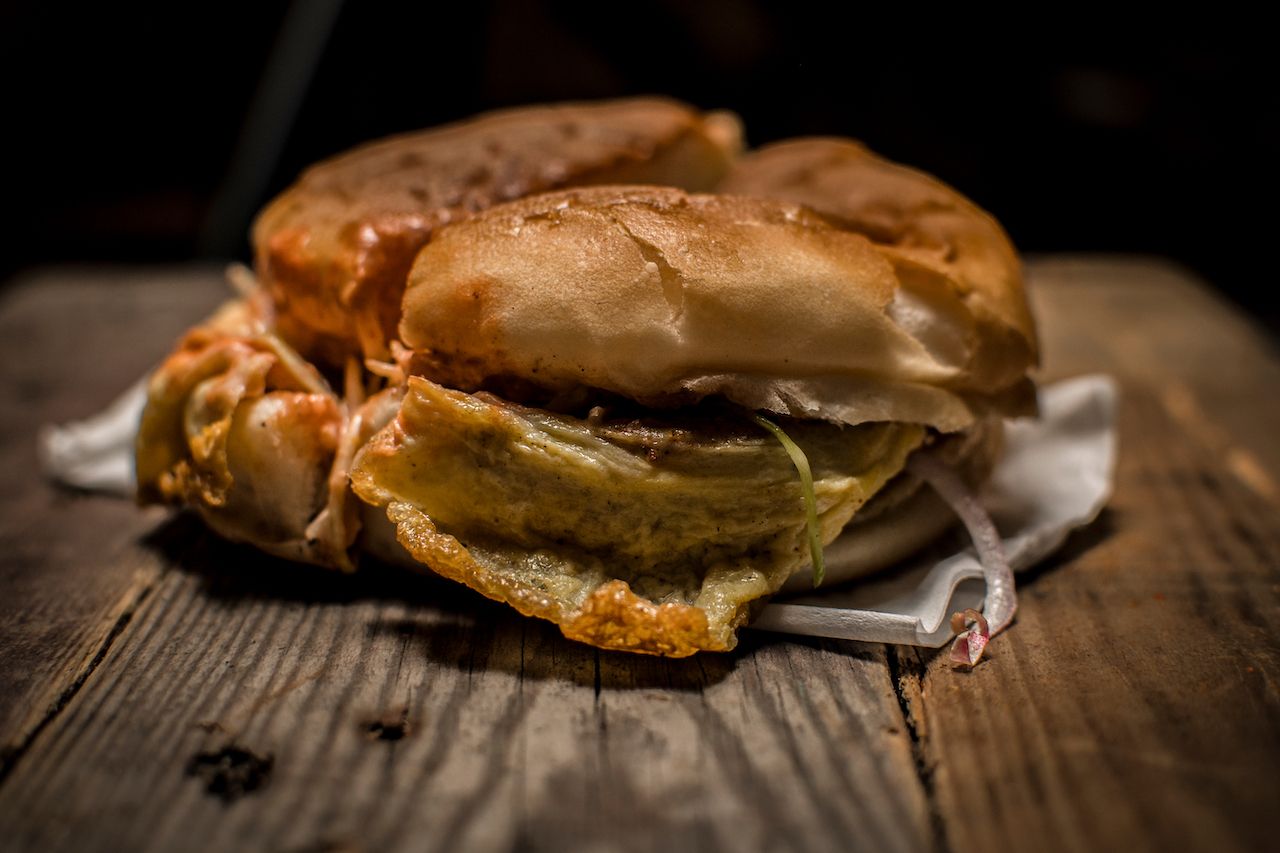 Bun kebabs are exactly what they sound like: minced kebab meat in a bun. Which, when you think about it, really isn’t all that far from a burger. While what goes in between the buns can vary (beef, lentil, mutton, chicken, and potato patties are popular), a core set of spices and ingredients stay the same: onions, chutney, chilis, and egg. After the patty is formed, it’s fried. One common style is anday wala, which has an egg on top of the patty. Bun kebabs are a popular street food in Karachi, Pakistan, but can be found across the country.