The three countries that make up the Baltics — Estonia, Latvia, and Lithuania — all gained their independence in 1991. Since then, they’ve pretty much been an uninterrupted Eastern European success story. The region’s newfound status as an economic and cultural hub — combined with the appeal of its expansive forests, sandy beaches, and medieval town squares — have attracted visitors from all over the world. Add in hospitable locals and a strong commitment to traditional cultures, and you have the recipe for an incredible summer road trip. Here are the details. 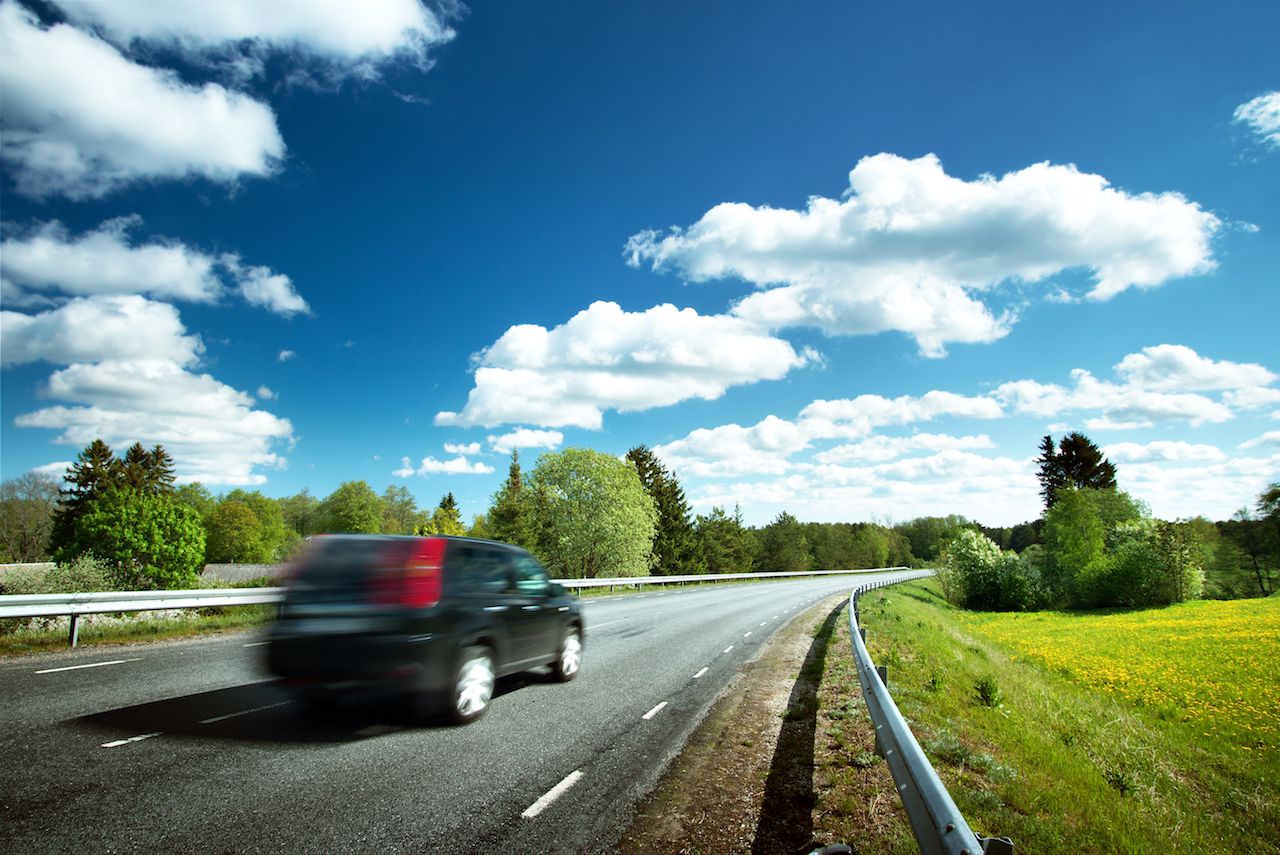 First, there’s a bit of an elephant in the room here. The Baltic countries are just to the south of Finland and west of Russia. That probably doesn’t sound like the most appealing climate to spend your summer holiday in. In reality though, you can expect up to 20 hours of sunlight per day during the height of summer, as well as temperatures to rival their more southern European neighbors.

For this itinerary, ideally, you’ll be renting a car. There are other ways to get around. Hitchhiking is pretty common in the Baltic region, as well as ride sharing. There’s also the regional bus company Lux Express.

Still, a road trip isn’t quite the same without the feeling of being in control of your own schedule, and it’s hard to capture that without your own set of wheels. All of the major rental companies operate in the region, so be sure to shop around before you arrive to find the best deal at the time.

On a very practical level, Estonia, Latvia, and Lithuania have all been in the EU since 2004. That means that they all use the euro, and you only need one visa to travel freely between all three. You also won’t need any extra drivers license accreditations or insurance to go back and forth across the borders during your trip. And yes, they drive on the right-hand side of the road — but you may find renting an automatic vehicle to be significantly more expensive.

Now, let’s get to the fun stuff. We’re working our way from south to north. We’re also accounting for a minimum week-long road trip, but the more time you can spend in each stop the better. 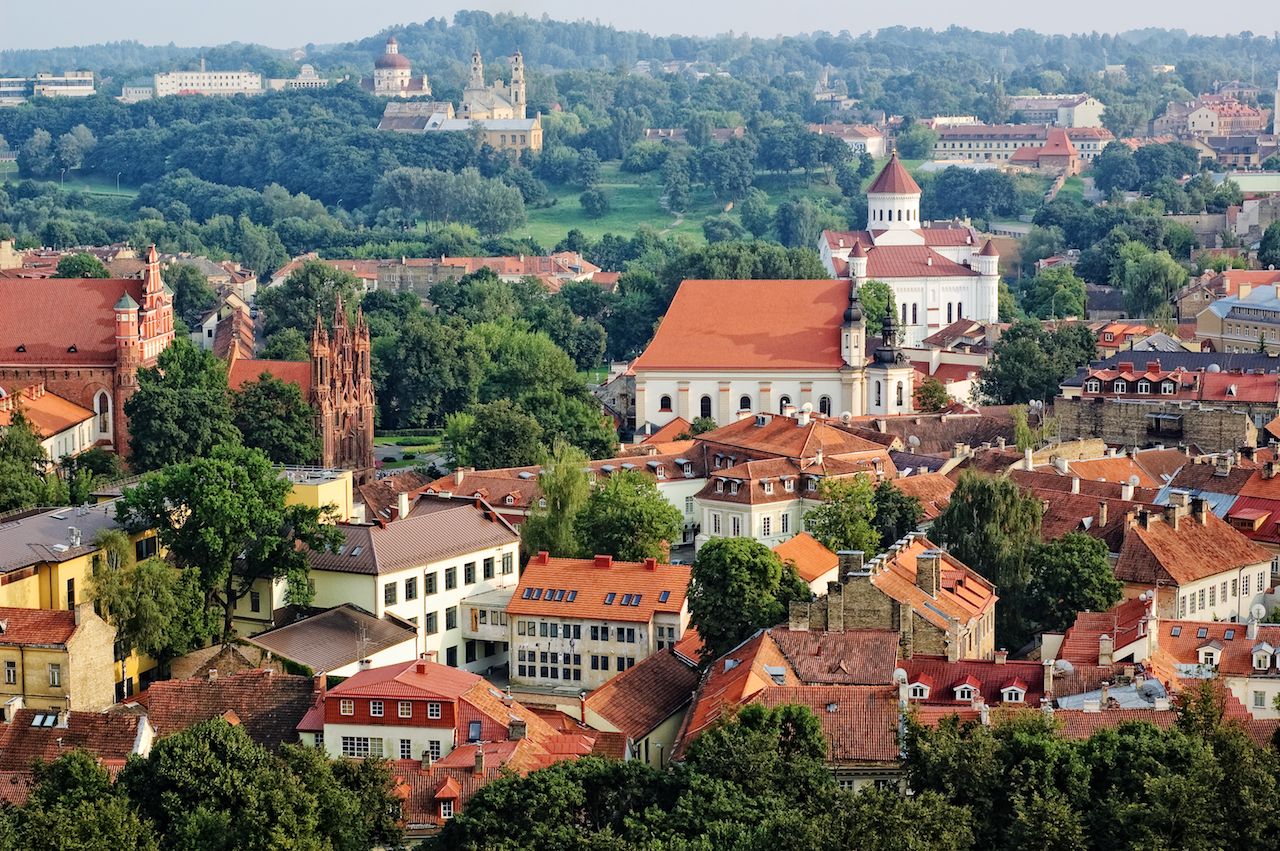 Lithuania’s capital city, Vilnius, is a strong start to your Baltic road trip. Its leafy old town is Europe’s oldest and has even been designated as a UNESCO World Heritage site. Its medieval churches and cobbled streets are an ideal Insta opportunity. Or, if you prefer to do things a little more old school, their old-fashioned beauty can be enjoyed in the here and now. In any case, Vilnius is the type of city where simply roaming around the streets is an experience in and of itself.

Vilnius is also one of Europe’s cheapest capital cities, so it’s a chance to splash out and live a little bit more luxuriantly than you usually can on a road trip. For a high-end spin on traditional Lithuanian favorites, look no further than Amandus. The tasting menu and wine selection are about as good as you’re likely to find anywhere but for a fraction of the cost of the bigger European capitals.

While Vilnius is rich in street art and statues, special mention has to be given to the slightly bizarre bust of prog-rock hero Frank Zappa decorating the top of a tall metal pole. 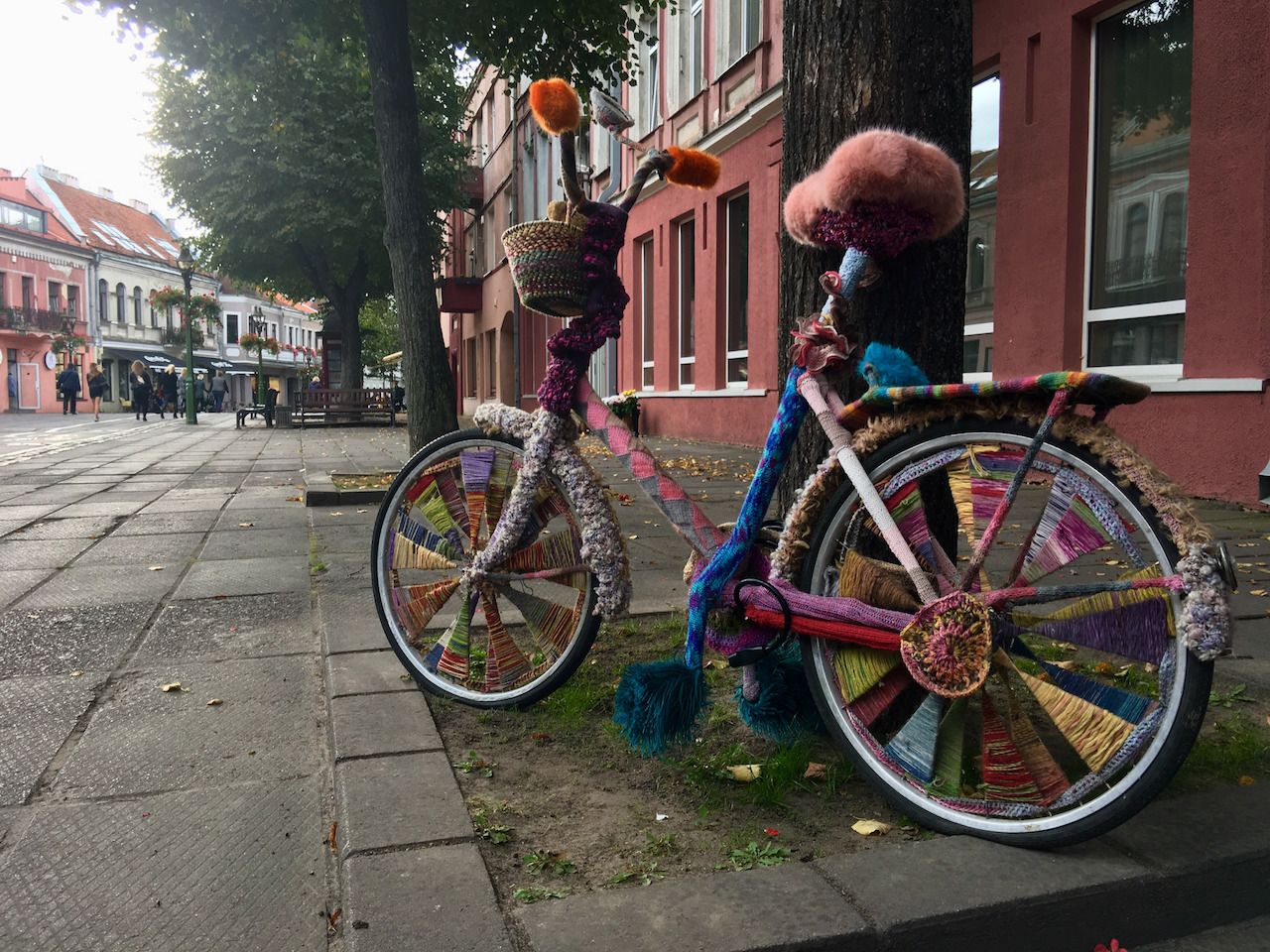 The student city of Kaunus is just over an hour northwest of Vilnius. While the city itself has a lot to offer, the absolute must-see is the haunting Ninth Fort Monument and Museum in the northern outskirts.

The 105-foot-tall monument was erected in 1984 to commemorate the suffering faced by Lithuanians during the Second World War and subsequent Soviet occupation. The fort and its surrounding grounds were used as labor camps during both periods. While this isn’t exactly the most light-hearted of experiences for your Baltic road trip, it is nonetheless a vital and enlightening stop. 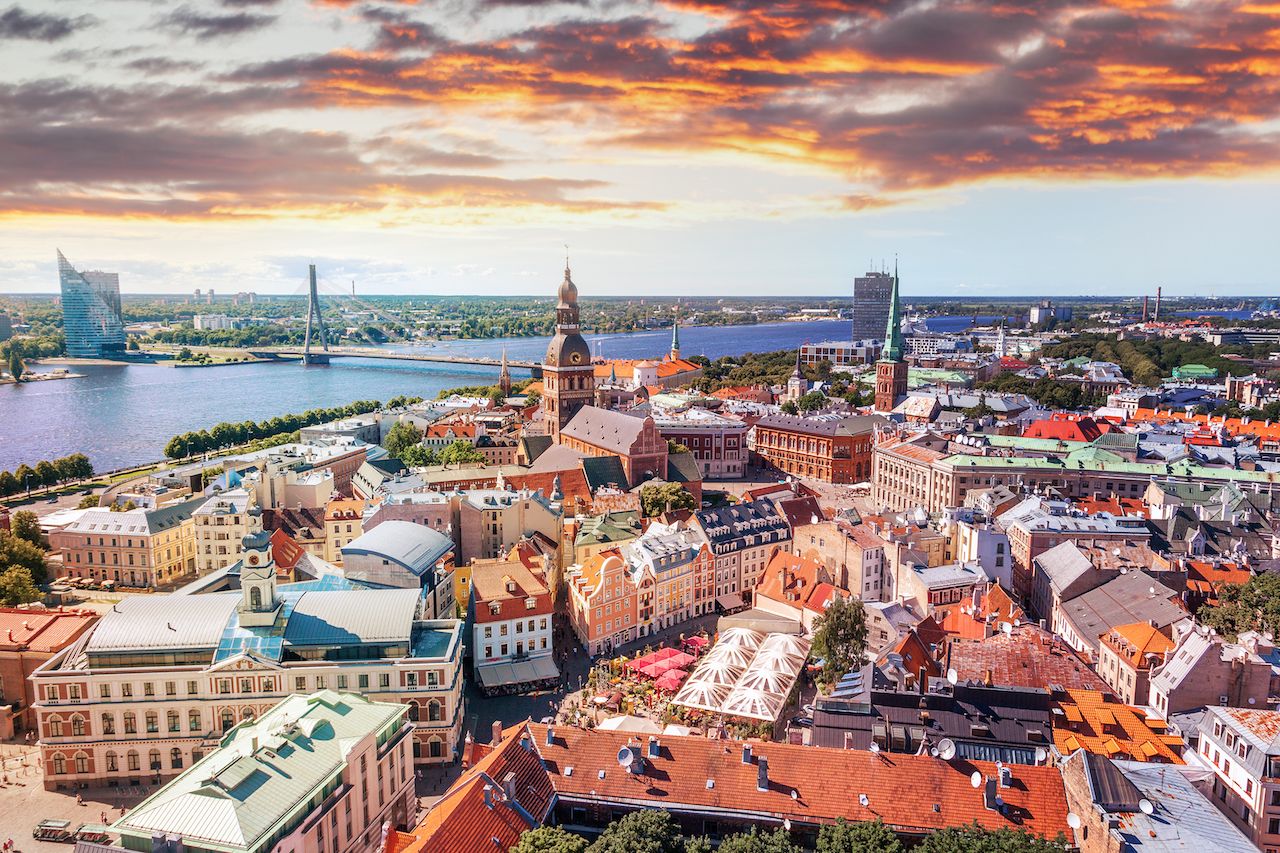 Around three hours north across the border, you’ll find yourself in Riga, the capital city of Latvia. The largest city in the region, Riga has stood on the coast of the Baltic Sea since the year 1201. You observe this fact just by looking at the city’s skyline, with a mixture of medieval, art nouveau, and brutalist styles, as well as glass skyscrapers and traditional log houses.

You can also experience this rich history, as well as more recent international influences, in Riga’s Central Market. Inside the market’s four former zeppelin hangars, you’ll find local produce and generations-old recipes for traditional dishes, including all kinds of cured meats and rye bread. This is also a fantastic opportunity to pick up some unique souvenirs like handspun knitwear.

Riga has developed its very own trendy and hip districts. None stands out more than Miera Iela and the surrounding streets. Here you’ll find some of the best craft beer joints in Eastern Europe, as well as innovative cocktails featuring the iconic Riga Black Balsam, a Latvian herbal liqueur. 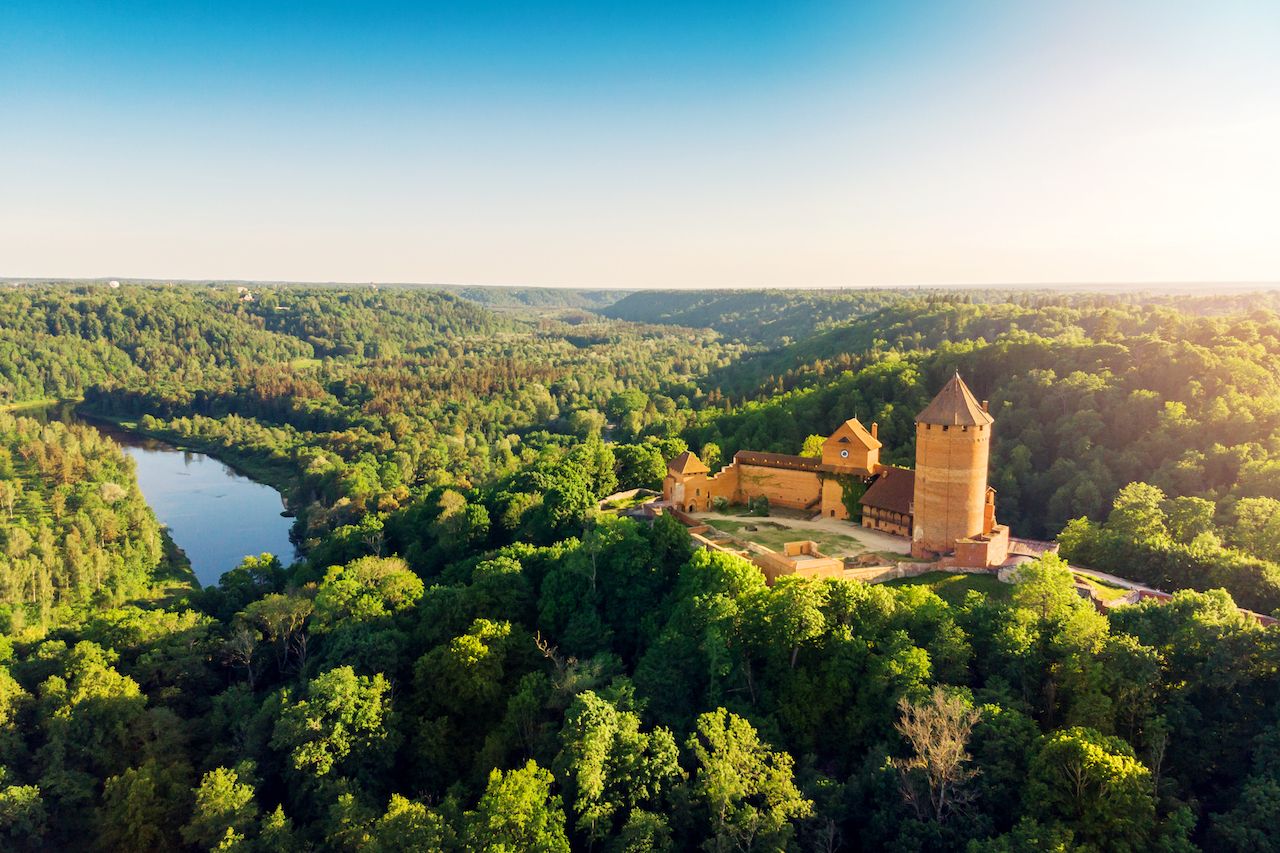 After time spent in the big city, you’ll be ready for something a little different. No road trip is complete without a chance to unwind in the countryside, and you’d be hard-pressed to find a better place to do just that than Sigulda, arguably the most scenic area in the Baltics.

A visit to the Turaida Museum Reserve should be your priority. The reserve covers a large area of a medieval manor, with a castle, church, and other sites of historic, artistic, and archaeological interest spanning as far back as the 11th century. Aim to be there around June 21 to enjoy the famous Summer Solstice party. Summer nights don’t get any better than that.

For a little bit more excitement, check out the Sigulda Bobtrase, the former USSR’s only bobsled track. The wheeled summer bob can reach speeds of up to 53 mph during a one-minute ride. For a more family-friendly experience, there’s also the “soft-bob,” which reaches more moderate but no less adrenaline-inducing speeds. 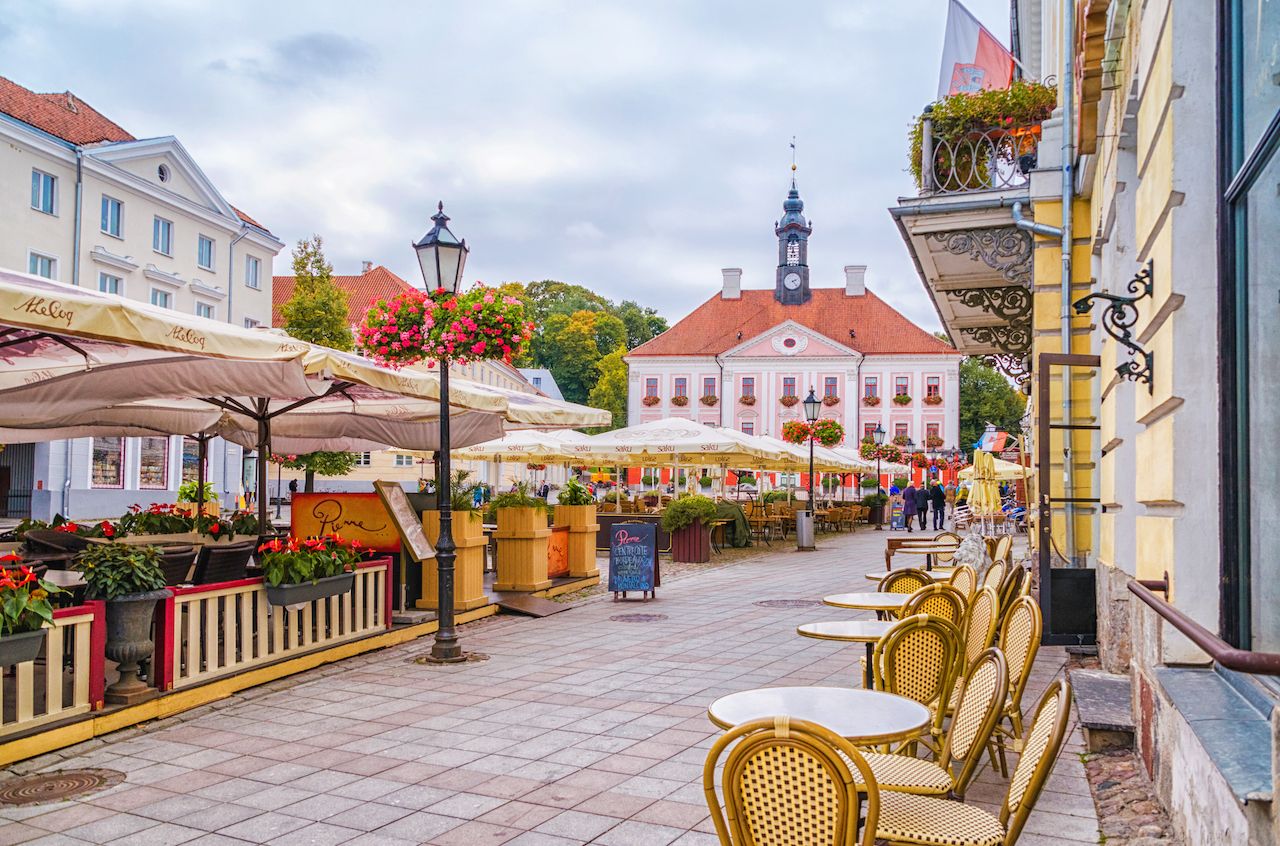 The first Estonian stop on this Baltic road trip is Tartu, the region’s intellectual capital. About a fifth of Tartu’s 100,000 residents are students, many of whom come from far-flung corners of the globe. In fact, Tartu has been a center of learning for close to 500 years.

Naturally, though, all that studying also means that Tartu is kind of a party town. In the city center, pretty much every other storefront is a bar or cafe. There’s everything from long-standing, authentic Russian dives to ritzy modern night clubs.

However, the firm favorite with just about everyone in Tartu is Moku, which offers vegan food and an extensive range of beers and spirits at student-friendly prices. Even better, it’s something of a novelty in that they’ll willingly turn a blind eye to people drinking their own alcohol in the surrounding alley and courtyard. In the summer months, this is duly taken advantage of. 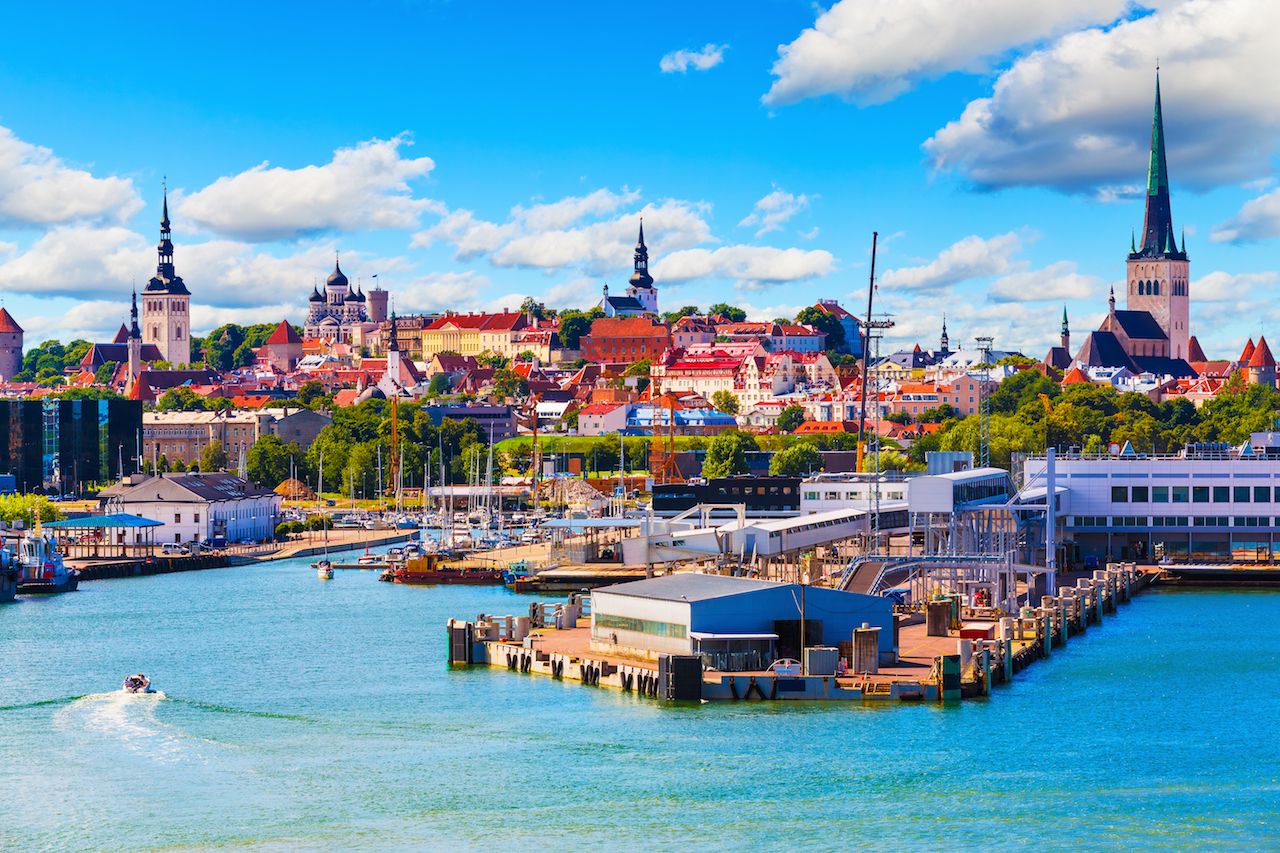 Finally, there’s Tallinn, Estonia’s capital. Located on the Gulf of Finland, this is the most upmarket destination in the Baltics. With a boom in tech start-ups over the last two decades, Tallinn is something akin to Eastern Europe’s Silicon Valley.

As you might expect, there are plenty of attractions suited to young professionals who have flocked to the city for work. Check out Estonia’s art museum, Kumu, for everything from traditional folk art to cutting edge contemporary creations.

For a moment of quiet reflection on everything you’ve experienced on your Baltic road trip, head up to Kohtuotsa viewing platform. Looking north, you can take in the city’s terracotta roofs, and on a clear day, you can gaze across the gulf to Helsinki.

Road TripsHow To Plan an Epic Road Trip Through the Scottish Highlands
Tagged
Road Trips Insider Guides
What did you think of this story?
Meh
Good
Awesome