Poor New Year’s Eve. While people will climb all over each other to proclaim their love for Christmas or Halloween, mention NYE and most people respond with a drawn-out tirade about “crowds” and “amateur hour,” ending with “I’m probably just going to stay home.” But they never do.

Because New Year’s Eve, if done right, is a lot of fun. And every year we try and find a way to make it more enjoyable. So now that we’ve all admitted we’re doing something for NYE, perhaps it’s time to find a destination that will bring a good party without any of the price gouging and stumbling idiots we find at home. A place where we can experience this global celebration with another culture — or at least with a drag queen getting lowered from the side of a building instead of a crystal ball. From the tundras of Alaska to the desert palms of Aruba, here are seven places with phenomenal NYE parties you’ve probably never thought to visit. 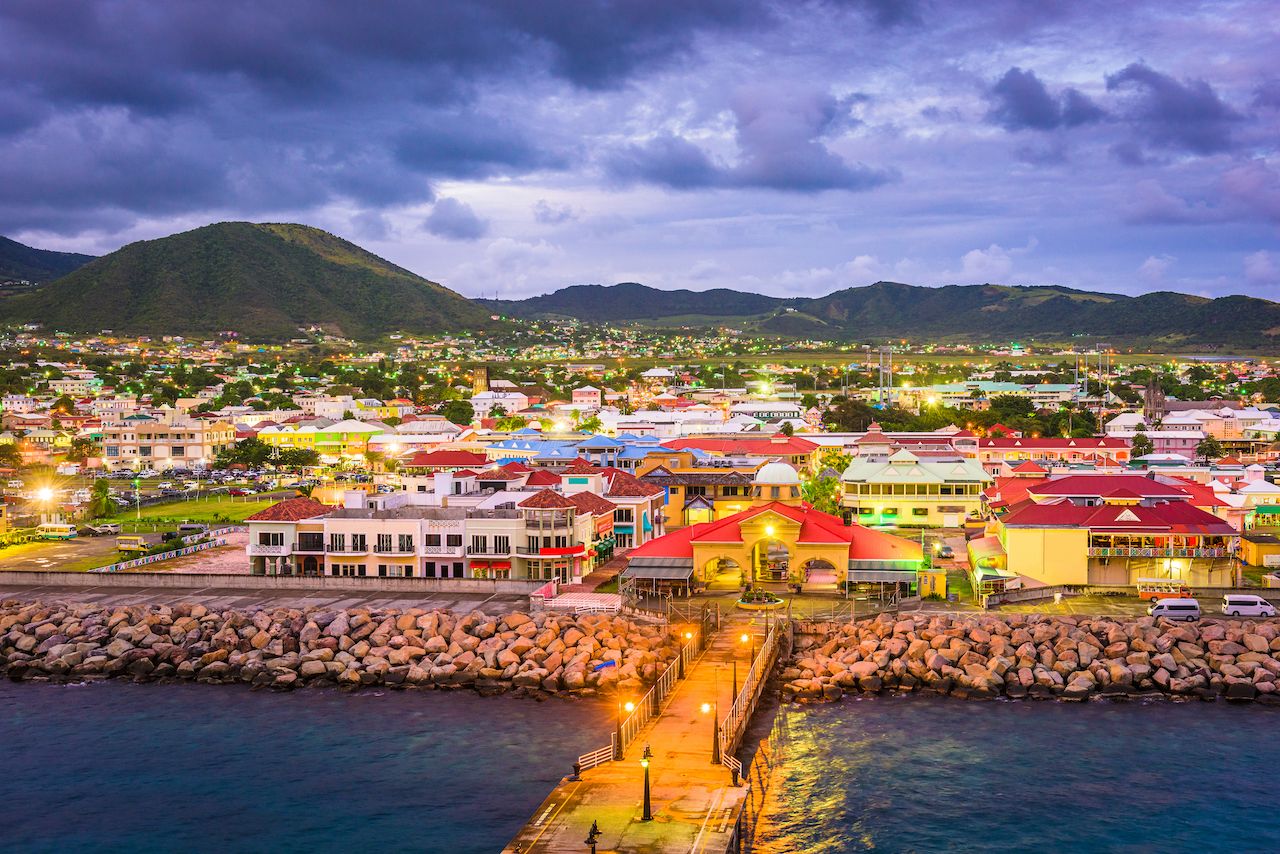 Combining a Caribbean carnival with New Year’s Eve is pretty much insanity squared, and that’s exactly what you’ll find in St. Kitts and Nevis at the end of December. NYE coincides with the last weekend of Sugar Mas, the islands’ annual carnival marked by calypso performances, parades, and loads of live music. New Year’s Day on St. Kitts is Parade Day, effectively the massive closing celebration to Sugar Mas where revelers in bright feathered costumes march through the streets of Basseterre. In addition to scantily clad dancers, you’ll also get a heaping dose of Kittian folklore, with moko jumbies, clowns, and masqueraders joining in the fun. There’s also the inherent appeal of ringing in the new year on a beach under a volcanic island in the Caribbean, but the party just makes it that much more inviting. 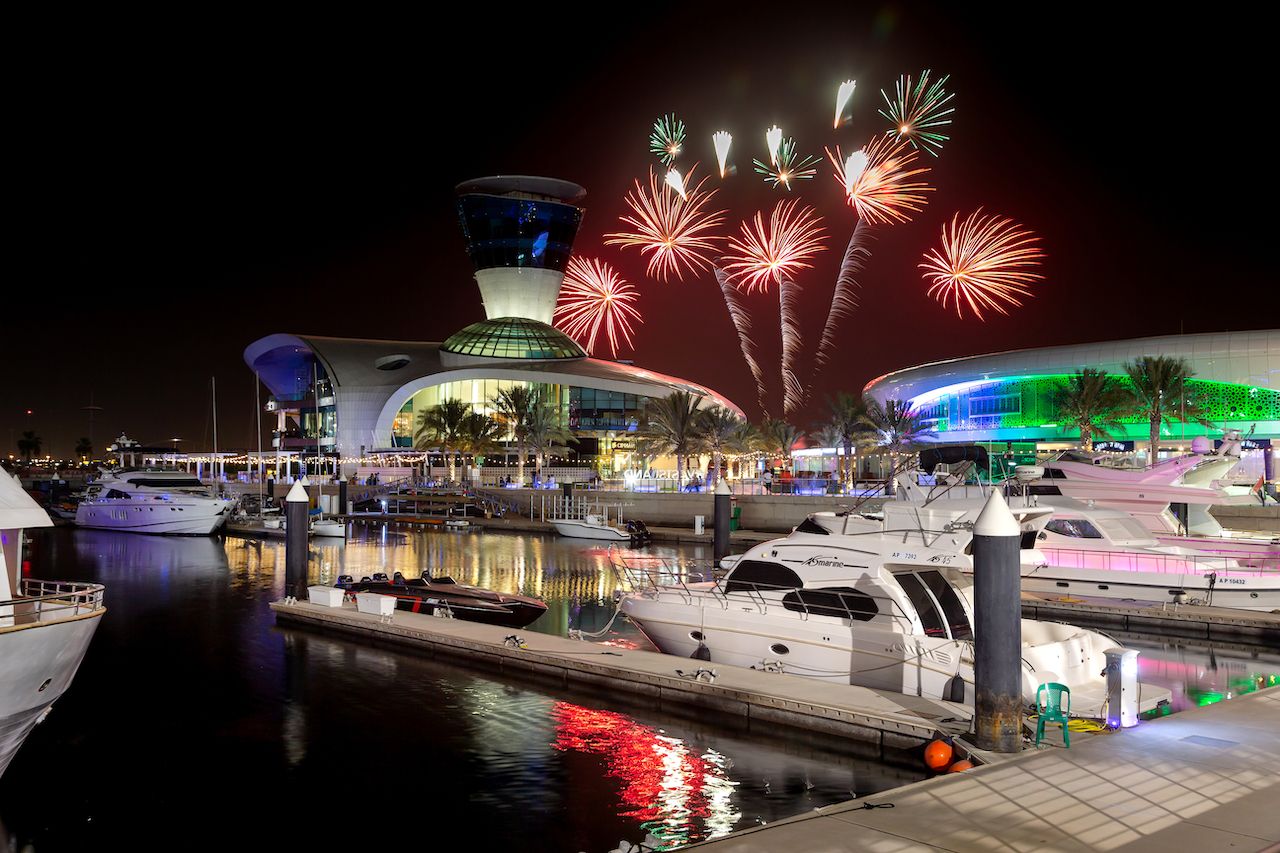 While Dubai gets the lion’s share of New Year’s attention in the UAE, don’t sleep on Abu Dhabi. Not that anything about this city on the Arabian Gulf is even a little bit subtle, but if you’re looking for a warm-weather desert adventure for New Year’s that will be a less-crowded, more enjoyable alternative, with Etihad Airways nonstops from four US hubs. From December 31 to January 1, the Resolution festival takes over Yas Island, with Bruno Mars headlining this year’s festivities on the 31st. That night you’ll witness one of the largest fireworks displays in the world over the Gulf, best viewed from the beach at the Emirates Palace. The next day, you’ll find an island full of family-friendly activities like The Monster, a 984-foot inflatable castle with 40 obstacles and a 60-foot slide. 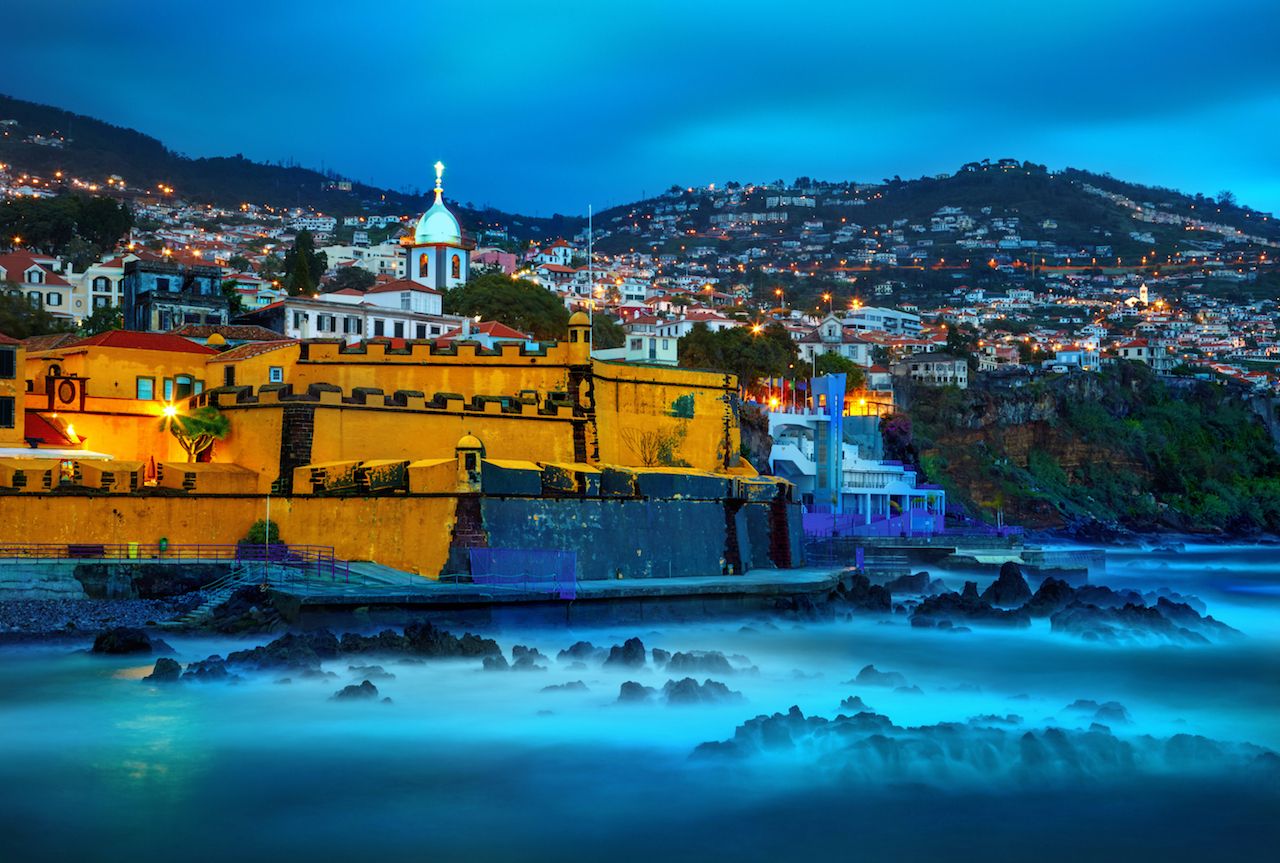 When planning island escapes for New Year’s Eve, Portugal isn’t exactly the first place that comes to mind. Nor is this little archipelago off the coast of Africa a top destination for NYE Eurotrips. But it should be. The islands are a renowned wine region, so the parties here are endless flowing bacchanals of diverse, local wines. Residents flood the streets for all-night parties that go until well after the midnight fireworks over the Atlantic have dissipated. And oftentimes that celebration flows over onto the beach, where you can dance in the sand until sunrise. 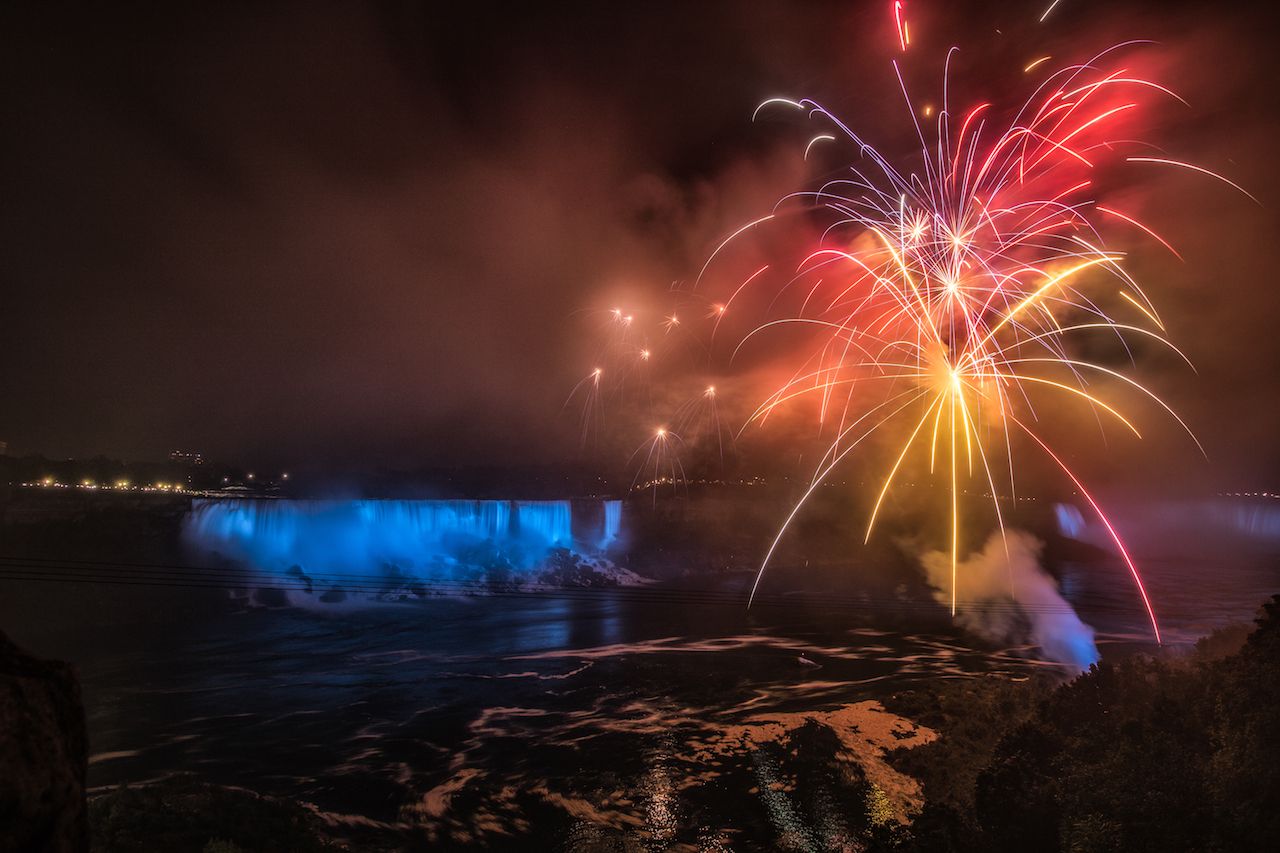 “But Ontario is COLD in December!” Well, that never stops a gazillion people from packing into Times Square to watch a ball drop, so frigid temps are never an excuse to miss a great New Year’s Eve party. The Canadian side of the falls hosts the biggest NYE in Canada, a daylong celebration along Clifton Hill that ends with an all-Canadian concert at Queen Victoria Park. As the sun goes down and evening approaches, you’ll see two fireworks shows, plus an impressive light show against the thundering water of the falls. Then you can finish the night sitting out on the patio at Niagara Brewing, watching the madness in the streets below. 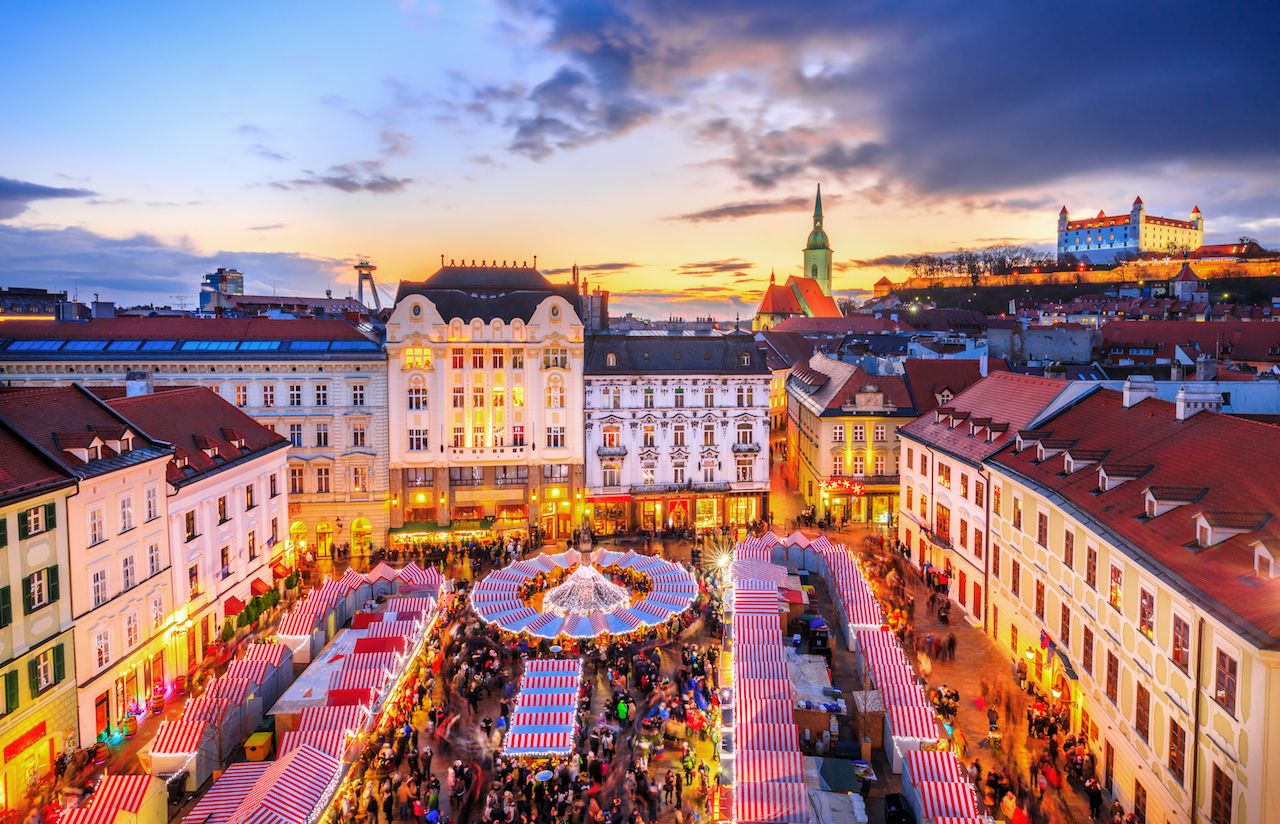 Not only is New Year’s revelry in Bratislava hands down the best in Eastern Europe, but the city is also one of the cheapest capitals on the continent. Meaning once you arrive, your night will probably cost less than it would back home. And it’ll definitely be a better party. Bratislava strikes a stark contrast to stuffy neighbor Vienna; instead of confining the best parties to high-society balls, it closes the streets of the city center and turns it into a giant pedestrian party. You’ll spend the day sipping inexpensive beers and watching live concerts on the Main Square and Hviezdoslavovo Square, the music blending with the traditional rehtacka noisemakers used to chase away the previous years’ bad juju. As the day rolls on, the crowds fill in, and it all culminates with midnight fireworks over the Danube. 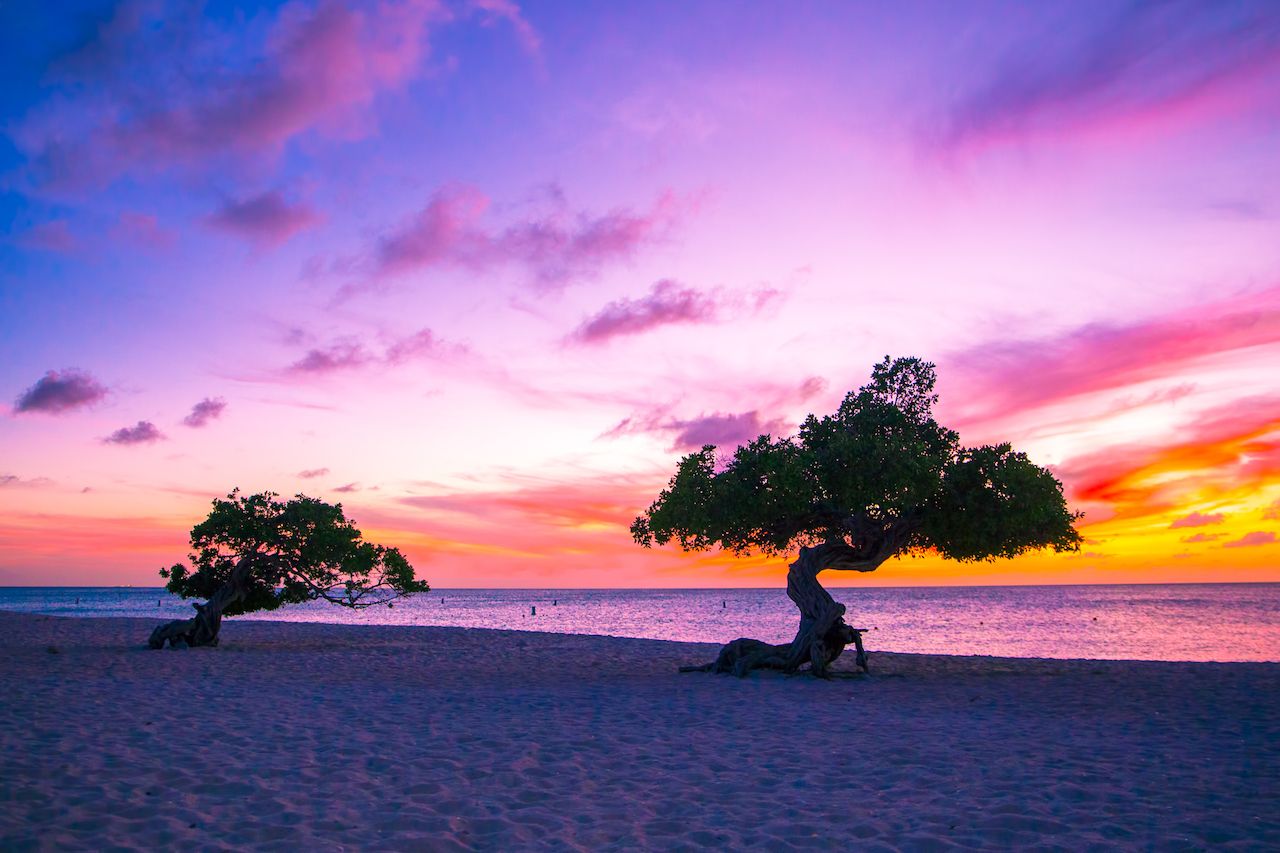 Watching the last sunset of 2019 over pristine Eagle Beach is a helluva way to end the year. And while most of the Caribbean is a good bet for NYE, desert-covered Aruba guarantees your party won’t be rained out. The grand tradition on the One Happy Island is lighting off pagara, little firecrackers you’ll see bursting all over the streets of Oranjestad. Their smoke is said to ward off bad vibes, or fuku, for the upcoming year. There’ll be a whole line of them going off along the entrance to the Hilton Aruba, which in addition to throwing a huge New Year’s Eve celebration also hosts the biggest fireworks show on the island at the beach in front. 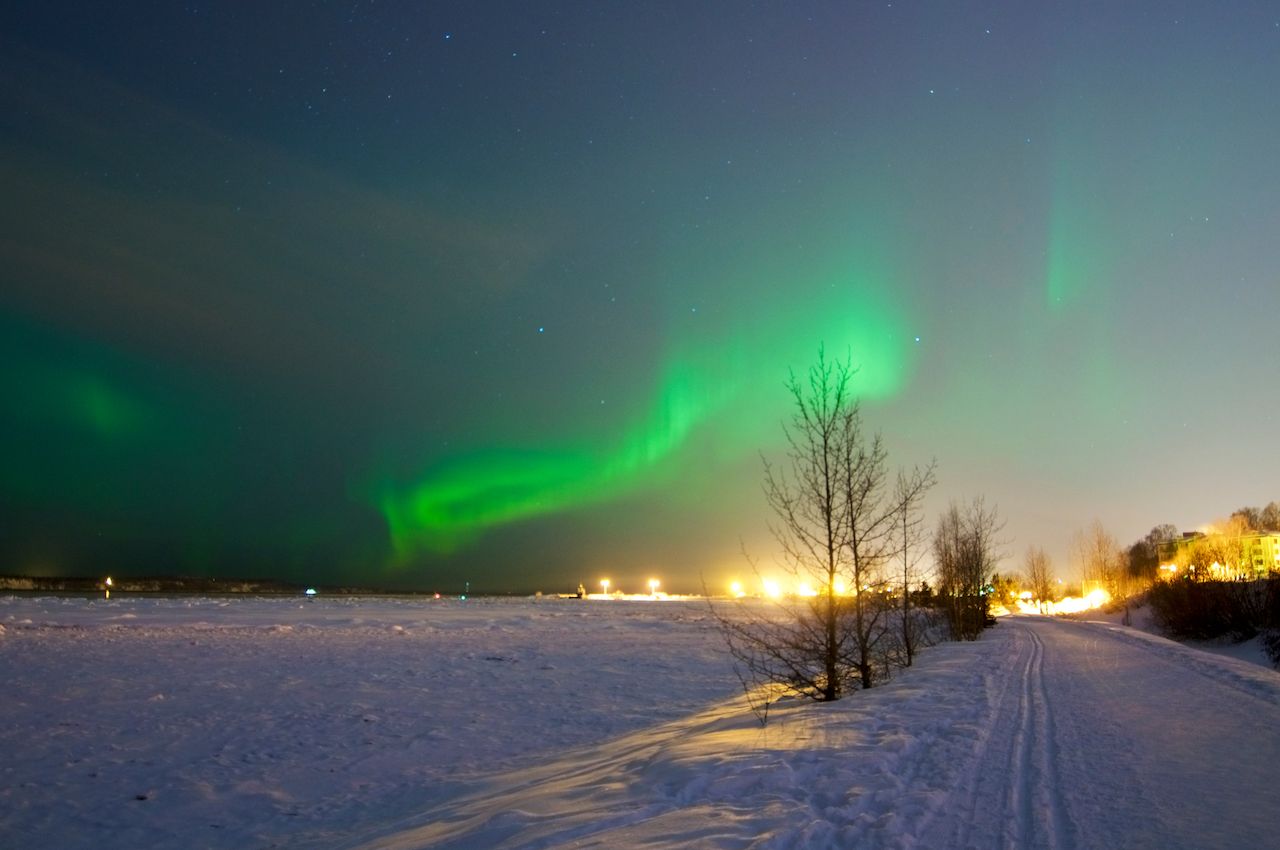 If you’re looking for a New Year’s ski excursion, Anchorage is a less-crowded alternative that boasts one of the coolest NYE events in America. This Alaskan city has emerged as one of the hottest ski destinations on the continent, and the slopes at Girdwood 2019’s final night will bring a torchlight ski parade where skiers and snowboarders will careen down the mountain with flaming red torches in hand. The sight at the Alyeska resort is one of the more surreal New Year’s images in the world, leading up to midnight fireworks and the best late-night après ski you’ll ever attend. Plus, there’s always the chance you may see the aurora borealis this far up north. In the city, you’ll find a big party in Town Square Park where fireworks go off at 8:00 PM to honor the hour when 2020 first reaches America. Also because when it gets dark at 3:50 in the afternoon, staying up until midnight is tough. 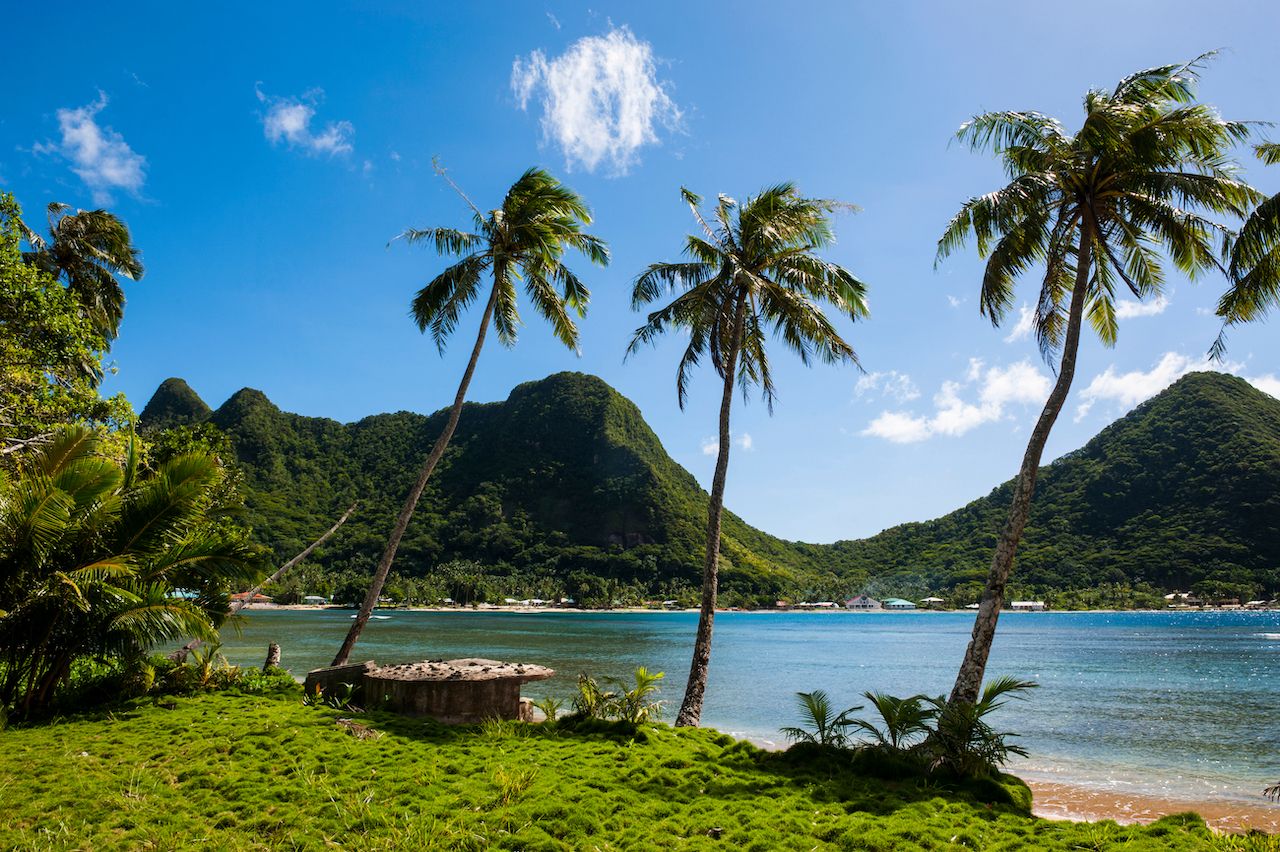 Can’t get enough of 2019? Don’t want to see the best year of your life end so quickly? Then wait until the last possible moment to let it go and head to American Samoa, a US territory in the far South Pacific that — along with Nieu — is the last place in the world to welcome the new year. You won’t find a wealth of parties here as these far-flung islands haven’t become a major tourist destination. The main events will mostly be at churches, where families create 10- to 15-foot trees and decorate them with candy, cash, and more as offerings for the new year. If you’re not hellbent on partying, there’s also plenty to do during the day, including one of the region’s more underrated beaches at Two Dollar Beach, hiking through the National Park of American Samoa, and catching the last sunset of the decade at Poloa village. 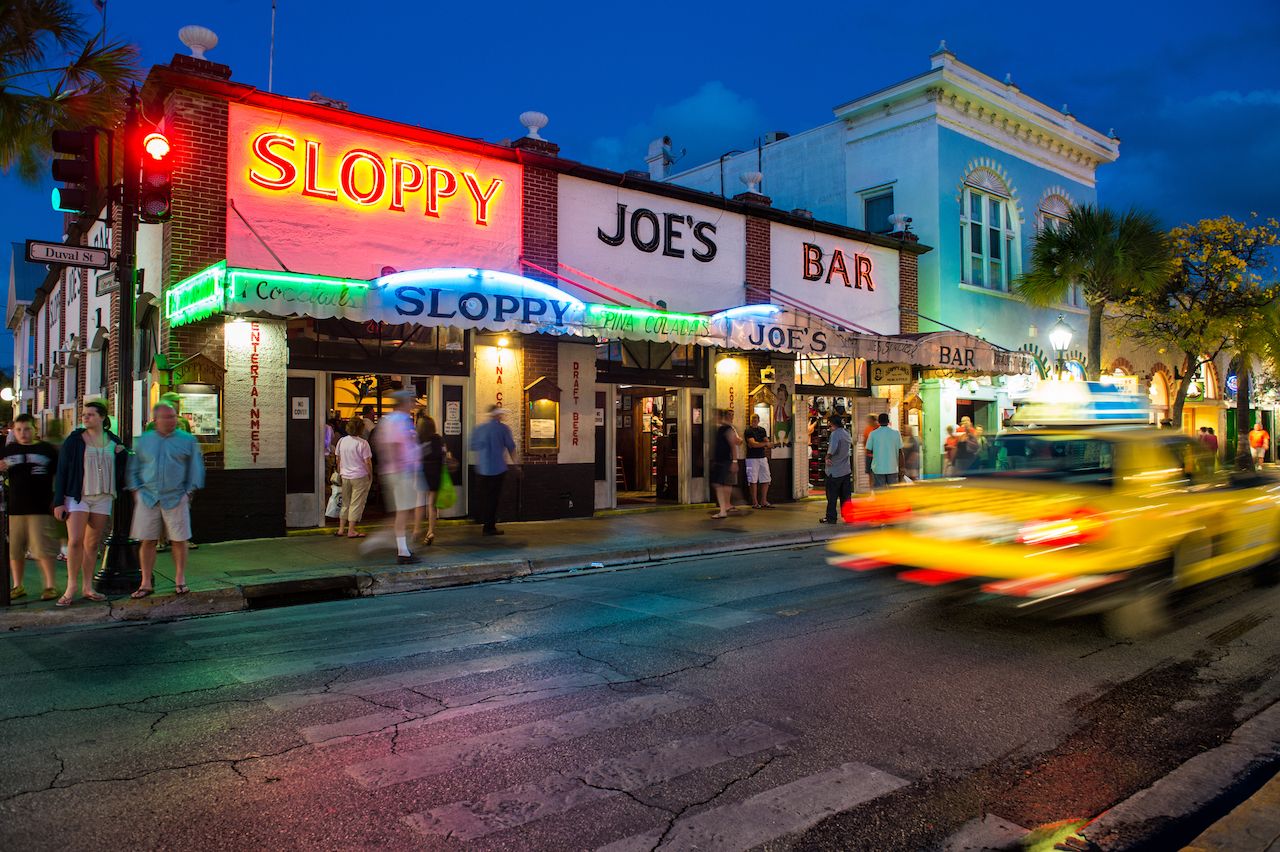 Though Miami might have Pitbull dropping a giant orange on national TV, the Sunshine State’s best New Year’s party is still in quirky, funky Key West. It’s fully recovered from 2017’s storms, and as an average weeknight here is better than NYE in a lot of places, it’s the perfect place to go for an uninhibited end-of-the-year celebration. You’ll find the traditional collection of street performers, artists, and musicians playing at Mallory Square. But the most unique tradition in the Conch Republic is at the Bourbon Street Pub where instead of dropping a ball they drop a drag queen named Sushi, who descends from the side of the building in red high heels as the countdown commences. It’s an only-in-Key-West sight that’s exponentially more enjoyable than anything on the mainland. 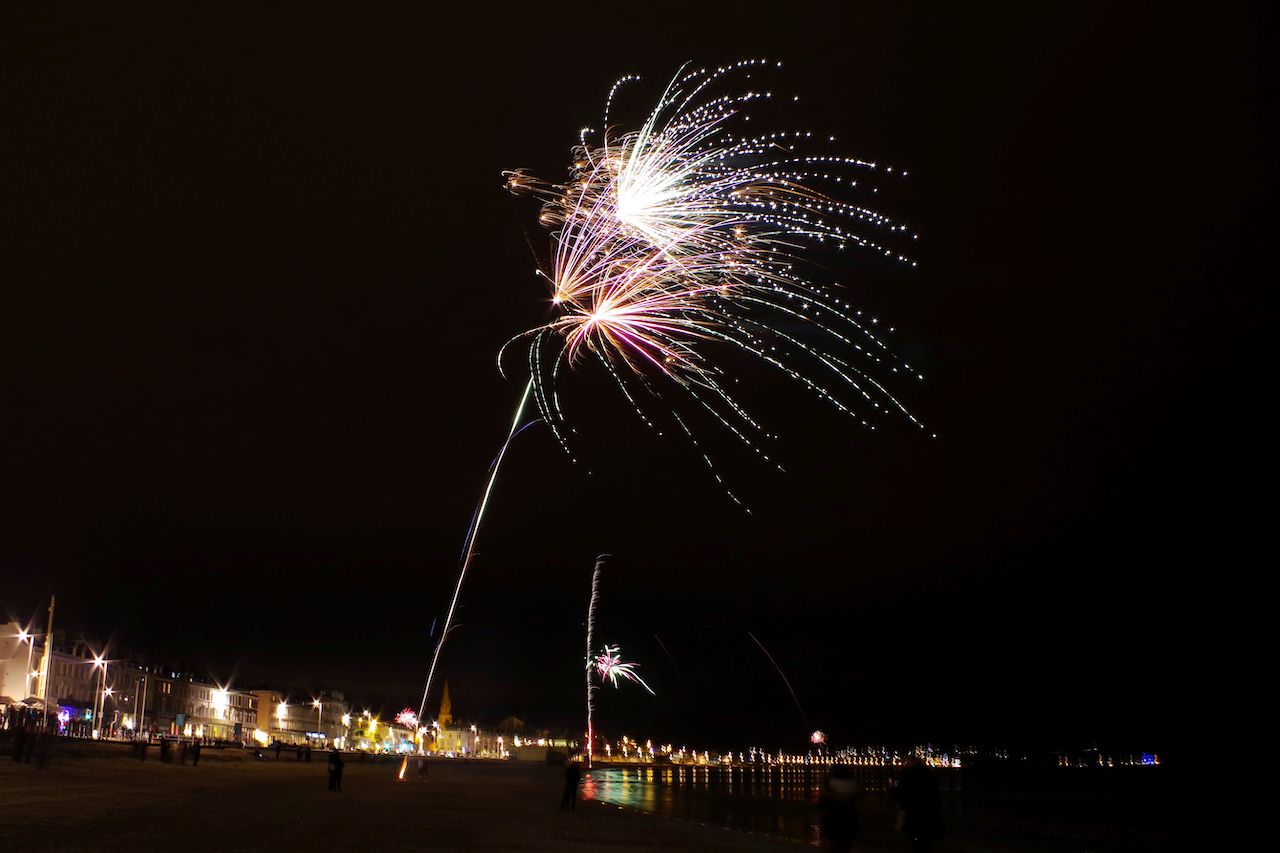 England’s Dorset Coast — also known as the Jurassic Coast — is one of the most stunning stretches of sweeping coastline in the UK. Of course, winter being winter in England, it may not be as stunning in December as it is in July, but it’s still worth a visit if you’re the type who likes to throw on a costume for New Year’s. Weymouth, a city of about 58,000 on the eastern end of Dorset Bay hosts its annual fancy dress extravaganza, where costumed denizens flock to the Town Clock and count down around its four sides, creating an epic street party of people in creative attire. You’ll find free-flowing beer and plenty of food on hand too, and though it may be a little windswept, it’s a great alternative to the big bashes in London. 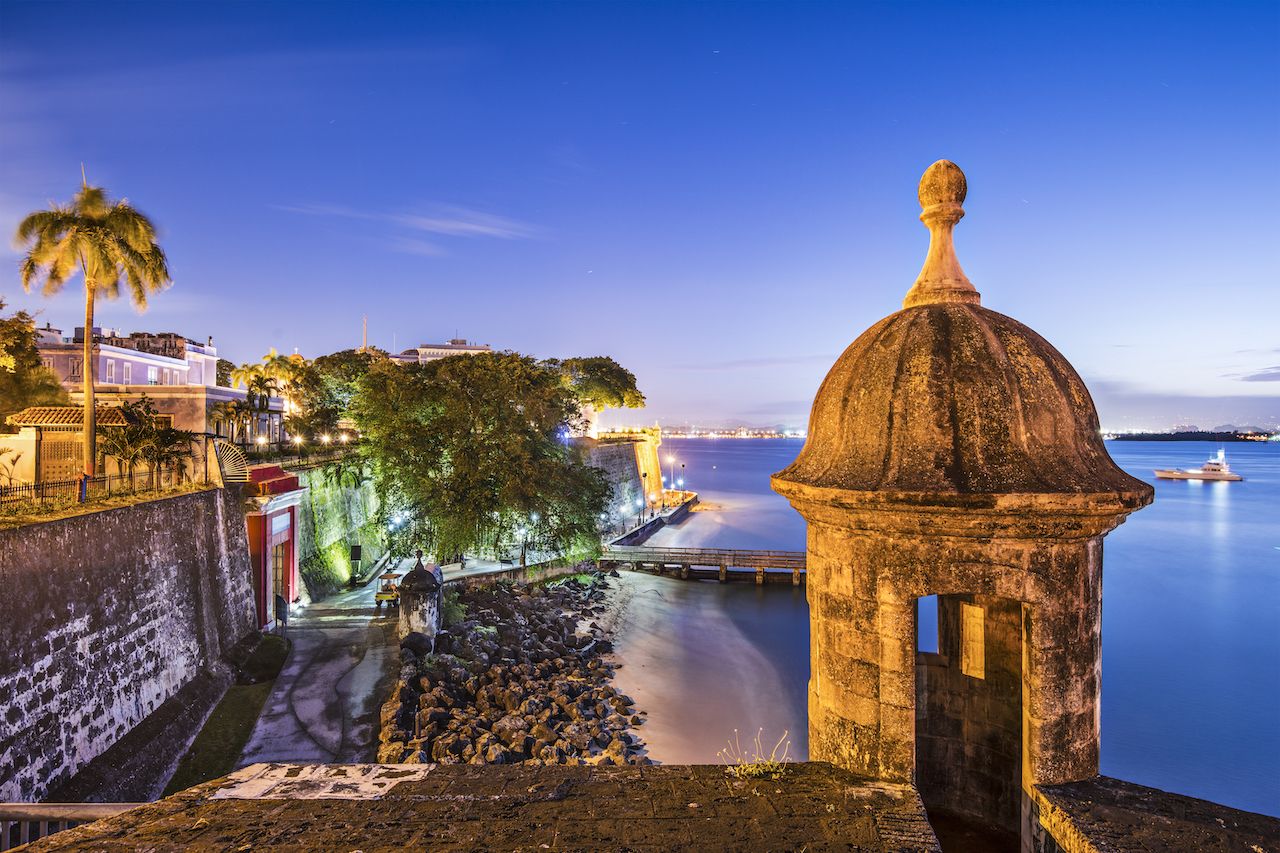 Perhaps the greatest thing about traveling to Puerto Rico for Americans is the ability to immerse oneself in another culture without actually leaving the United States. Never is this more apparent than when you spend New Year’s in San Juan, where the streets of the old city turn into a blocks-long salsa and meringue party as the bars set up on the street and dancing on the cobblestone continues well past midnight. San Juan also has better prices than you’d find in other countries with big, fancy parties like the one at the Caribe Hilton, which is under $100 a ticket. Nonetheless, attending isn’t necessary to make the most of New Year’s here. Just stroll along the waterfront and catch the fireworks over the Caribbean, reflecting off the walls of the historic forts behind you. 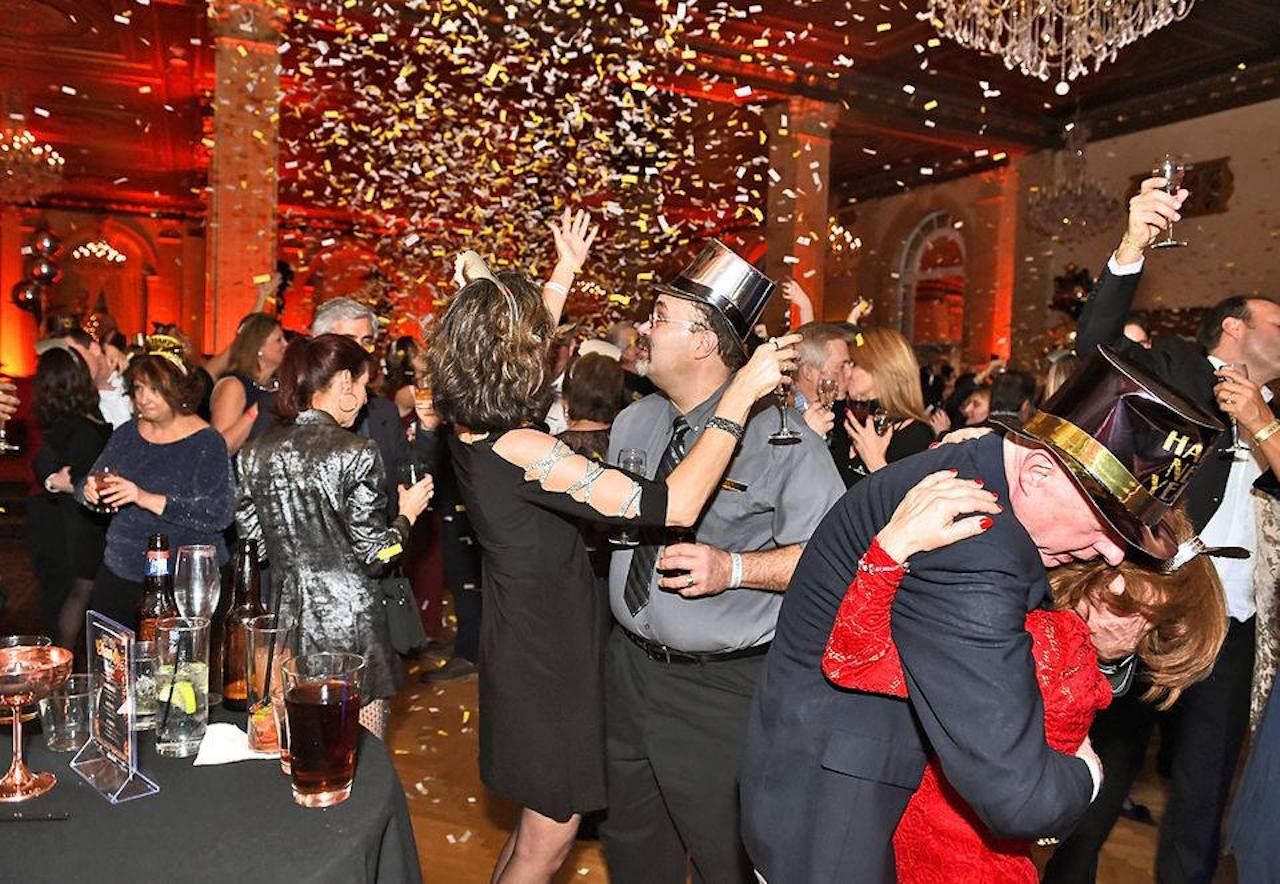 Granted the Finger Lakes aren’t exactly balmy in December, but at least here you can spend all day December 31 gearing up for the big moment by touring the over 130 wineries in the region. Just not all at once. If the weather is tolerable, you can also get in one great last hike through the “Grand Canyon of the East” in Letchworth State Park, which in winter looks a little like the Arizona original blanketed in white stuff. To cap off the evening, you can hit the Marriott Syracuse Downtown, a few miles from the Finger Lakes. It has one of the more surprisingly grand New Year’s celebrations in America with full-on circus performers and casino tables along with a live funk band.

NewsTake This Flight and Ring in 2019 Twice on Two Continents
Tagged
Festivals Holidays Trip Planning
What did you think of this story?
Meh
Good
Awesome