If you’ve been to any of the most popular Canada national parks on a summer weekend, you’ve probably noticed a problem: crowds. The parking lot at Banff National Park’s Moraine Lake can fill up by 7:00 AM, and traffic jams, shuttle lines, and relentless crowds don’t exactly spell summer fun. So instead of fighting to get into Banff, why not dedicate the coming year to some of the lesser-known Canada national parks — the ones that have plenty of crowd-free spots?

Especially in western Canada, many of the national parks look like stock desktop wallpaper, practically offensive to the rest of the planet with their outrageous beauty. And much like your average screensaver, there’s no people in the photo.

The below Canada national parks and provincial parks (the latter of which are free to visit) are all in British Columbia or Alberta, concentrating on the Canadian Rockies. Each of them has a fraction of the visitors you’d find at Banff or Yellowstone or Yosemite, for that matter. Even if you can’t get here soon, here’s where to point your dreaming. 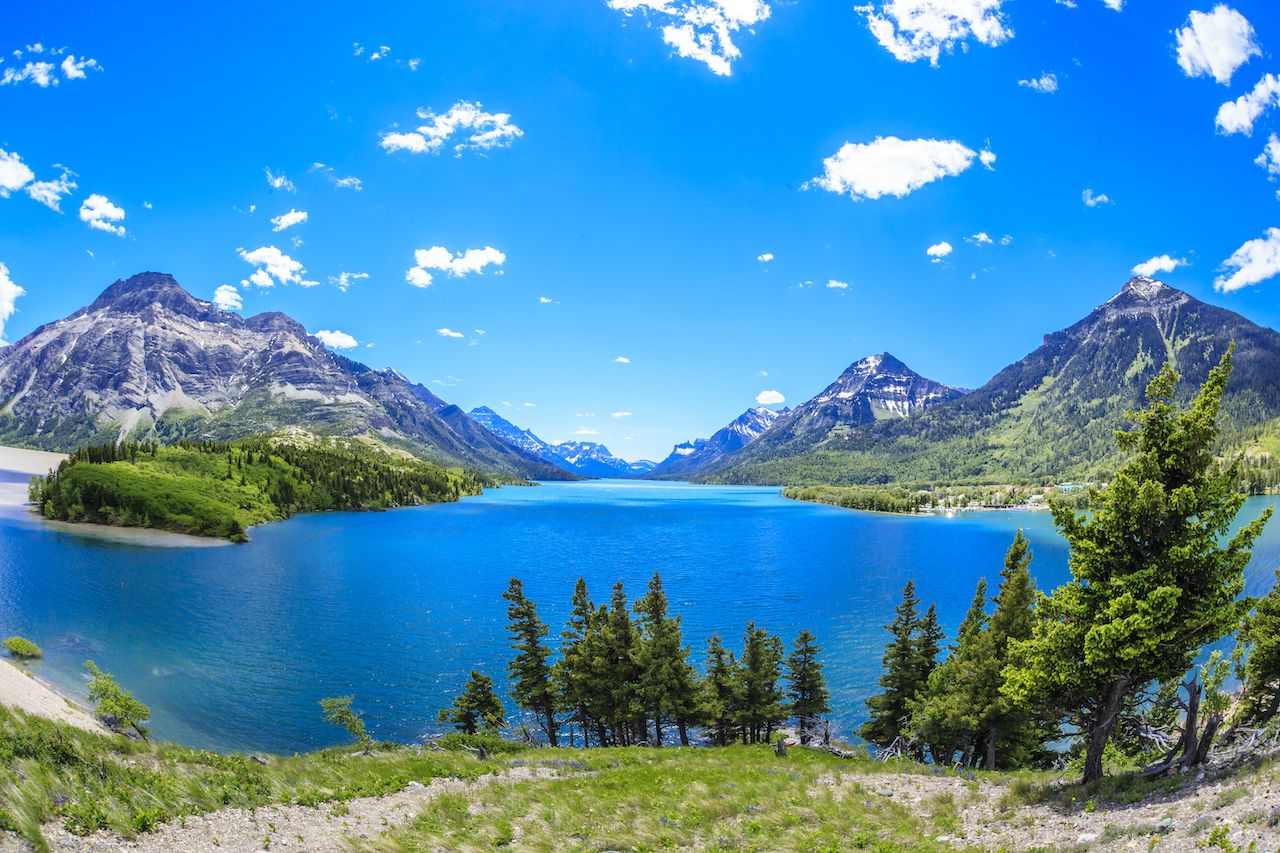 Glacier National Park’s twin just across the border, Waterton Lakes, somehow gets 2.5 million fewer visitors than its identical American counterpart. The beauty, though, certainly doesn’t care about the flag change.

True to its name, Waterton Lakes is as much about the water as it is the mountains. Visitors can hop on a classic Waterton Lake boat tour or take the scenic Akamina Parkway all the way to Cameron Lake. From there, you can turn around or take the 12-mile Carthew-Alderson Trail past four other lakes to Carthew Summit. For something a bit more casual, the 8.7-mile Red Rock Parkway is another scenic drive absolutely worth your time. Plan to take it slowly so you can keep your eyes peeled for wildlife, like bears, deer, and bighorn sheep. 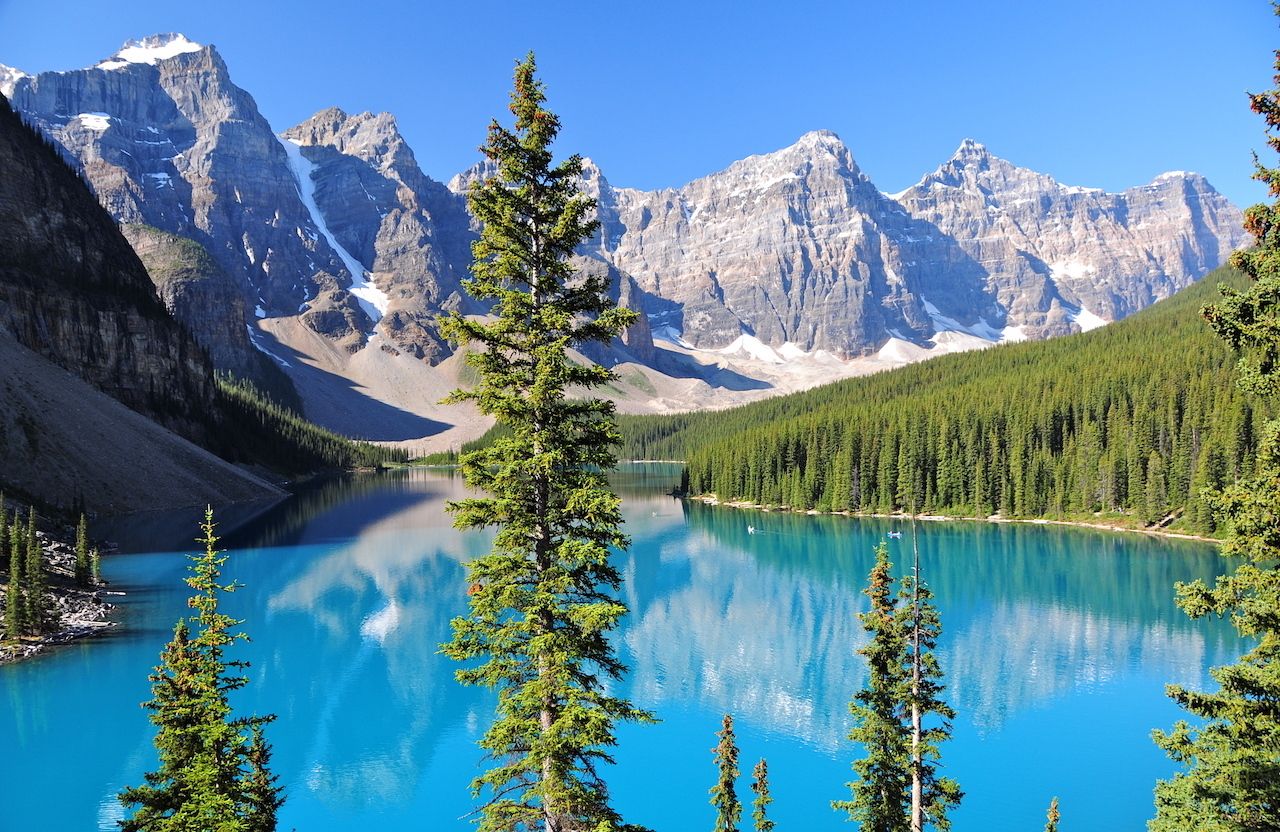 Mount Revelstoke. Giant Cedars boardwalk. Meadows in the Sky Parkway. Inspiration Woods — the fairytale-ish names at this national park are well-deserved. This is one of the best Canada national parks for pure mountain adventures. In the park, you can walk among giant trees, summit mountains, and paddle jade-green waters. If nothing else, you’ll definitely — wait for it — revel.

Mount Revelstoke’s summit is reachable via hike, bike, or car. It’s worth spending the night so you can be there after sunset, when the night sky is almost as bright as the day (because of stars, not light pollution). On your way to the summit, stop at the Monashee Viewpoint on the aforementioned parkway for a bird’s-eye view over British Columbia.

Tip: Heading east out of Revelstoke takes you along Highway 1 across Roger’s Pass to Glacier National Park of Canada and Yoho National Park. It’s a 2.5-hour drive but home to some of the prettiest landscapes in Canada, so budget plenty of time to make stops. 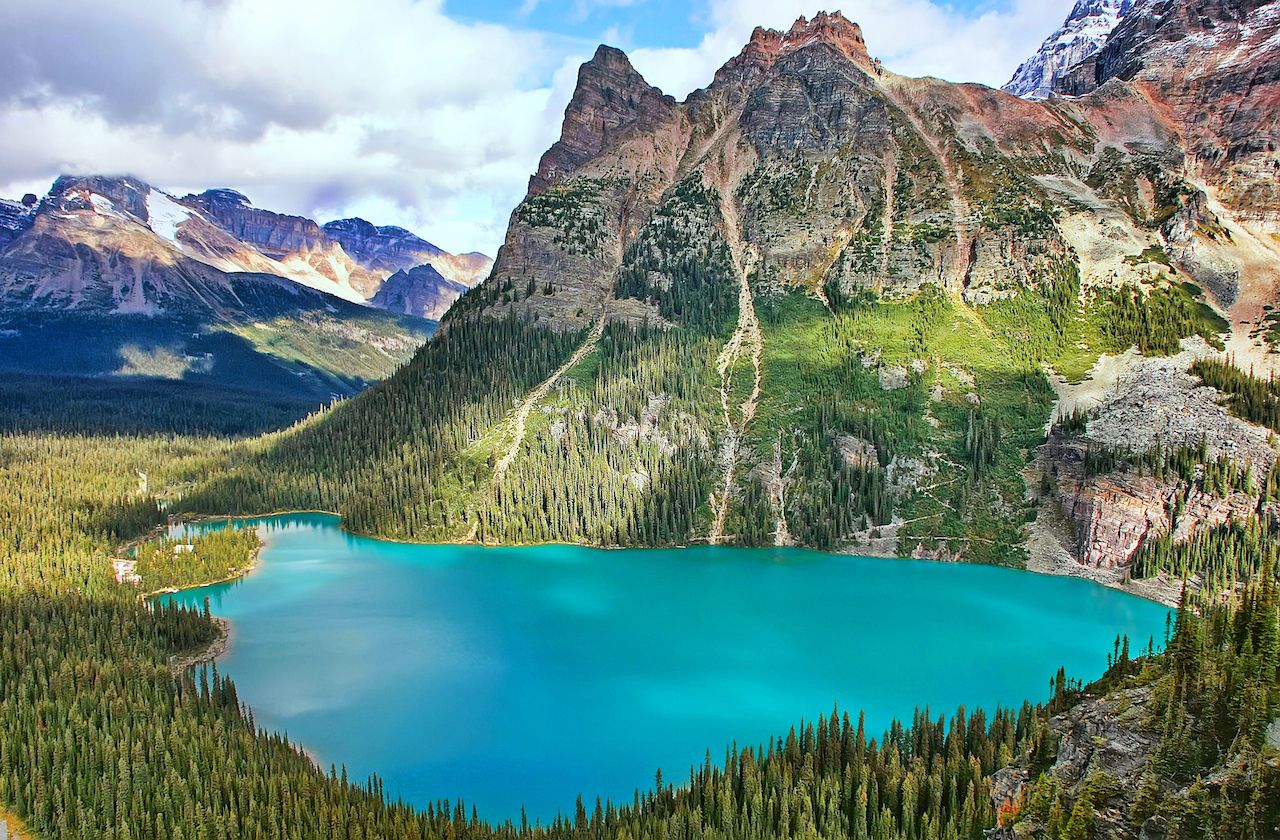 Just 45 minutes from the town of Banff is Yoho National Park, which gets only 20 percent of the tourists that visit Banff. The word “Yoho” comes from a Cree word to describe amazement or awe, which is quite fitting. If you were to compare images of both Canada national parks, you wouldn’t be able to tell which is which. Glittering lakes, snowy peaks, northern lights, thundering waterfalls –the both serve up the works.

Lake O’Hara is can’t-miss stop, though you’ll need a reservation to shuttle in (otherwise it’s an eight-mile hike). There’s also Emerald Lake, true to its name, and the impressive Takakkaw Falls, Canada’s second-highest waterfall at 1,250 feet. You can drive directly to the base of that one.

As for hiking, consider the 10-mile trek to Twin Falls, the easy three-mile loop around Emerald Lake, or the two-day, 12-mile Iceline Trail. In certain parts of the park, you’ll be hiking along Burgess Shale, known for its insane sea-creature fossils from the Cambrian Explosion. Keep your eyes peeled. 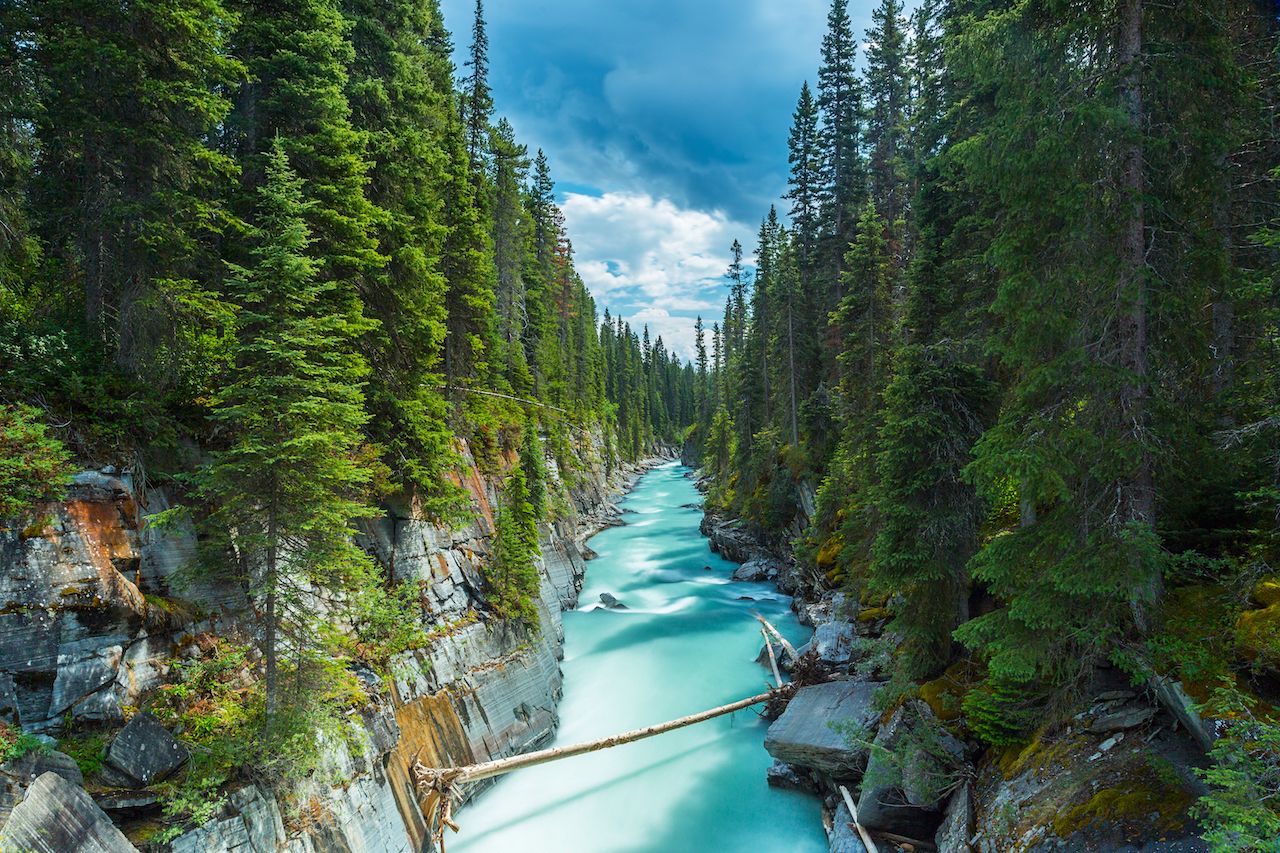 Kootenay sits in Banff’s shadow (a mere 30 minutes away) and is yet another underrated Canada national park. It has all the glorious glacier-capped peaks and turquoise lakes of Banff with a fraction of the crowds.

If you’re coming from Banff, you’ll hit the Vermilion Pass Area first — you’ll want to make the 5.2-mile round-trip trek to Stanley Glacier or the shorter one-mile hop to Marble Canyon. From the south, it’s easy to spend the day hanging out around Olive Lake or soaking in Radium Hot Springs. The Sinclair Canyon and the stretch of Highway 93 along the Kootenay River offer great photo opportunities, too. 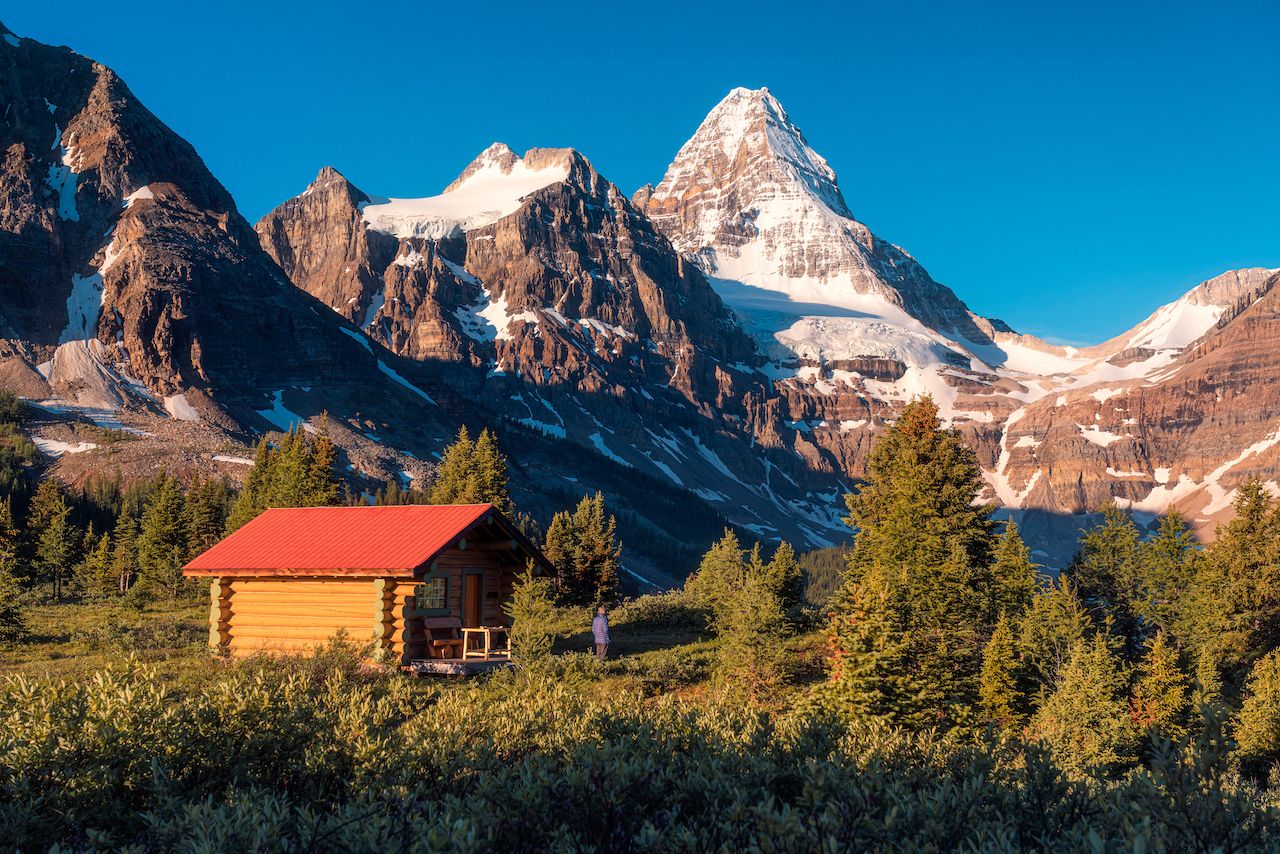 You guessed it: Mount Assiniboine is just south of Banff, and if you read the Canada national park recommendations above, you probably know what to expect: views that look like they’re in Banff. Nicknamed the “Matterhorn of the Rockies,” Mount Assiniboine is the peak to know. It has barely a fraction of Banff’s visitors, partially because it doesn’t have any roads.

To get in, you’ll be hiking, taking a helicopter, or some combination of both, and you’ll definitely be staying the night. You’ll have a few hiking options regarding routes, each about 20 miles. Once you’re there, you’ll spend your nights camping, staying in hostel-esque huts, or taking it easy in the remote Assiniboine Lodge. You’ll spend your days hunting for the most beautiful lakes you’ve ever seen with no overcrowded parking lots in sight. 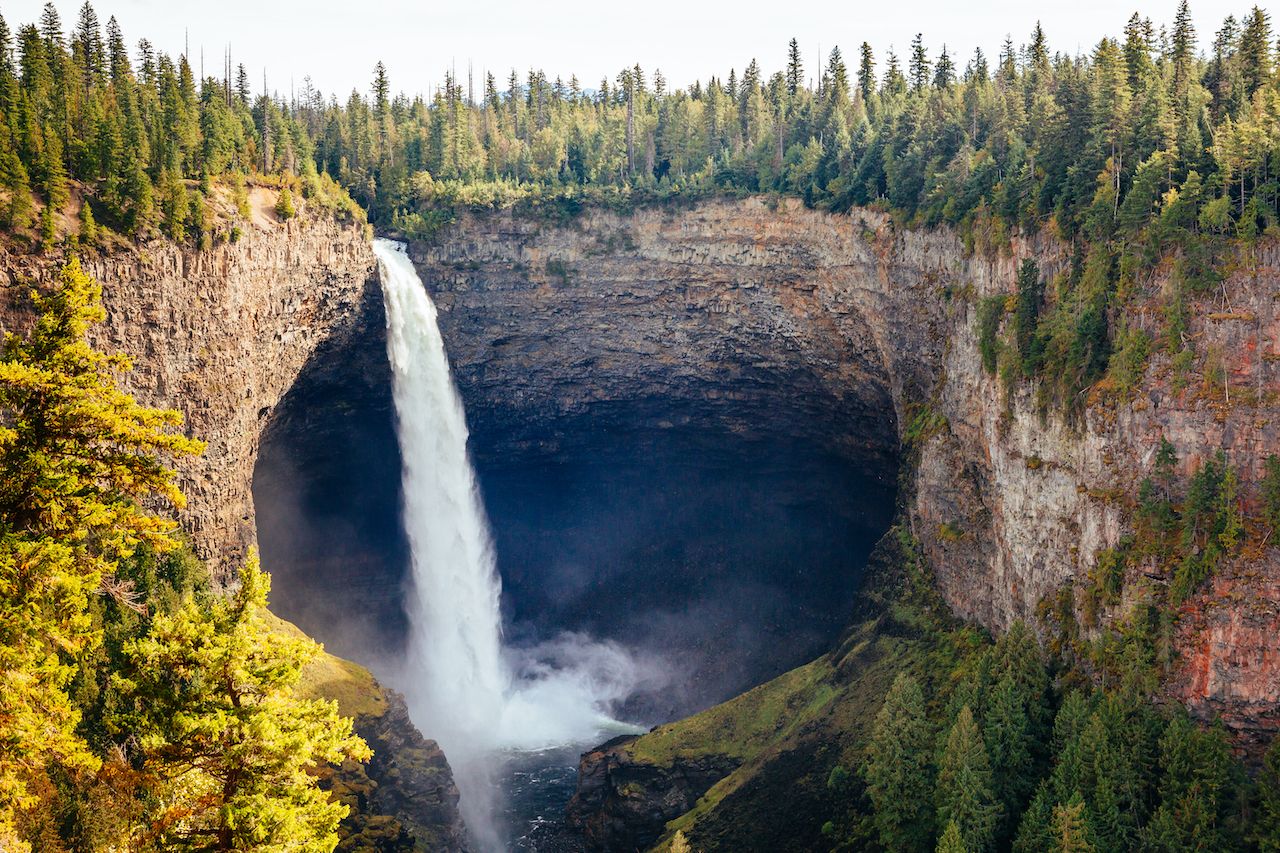 Wells Gray’s volcanic, waterfall-tumbling landscapes, still in the Canadian Rockies but a solid six hours from Banff, mix this list up a bit. It’s closer to Jasper National Park, though close still means three hours away. The southern quarter of the park is the only truly accessible section; it’s a the 21-mile corridor leading to trailheads, campsites, and millions of acres of potential.

While there, you’ll want to see the twice-as-high-as-Niagara-Falls Helmcken Falls, paddle Murtle Lake, and hike Pyramid Mountain. The latter’s eight-mile, round-trip hike to the summit provides spectacular views over the province as lovely as any you’d find in Canada’s national parks. 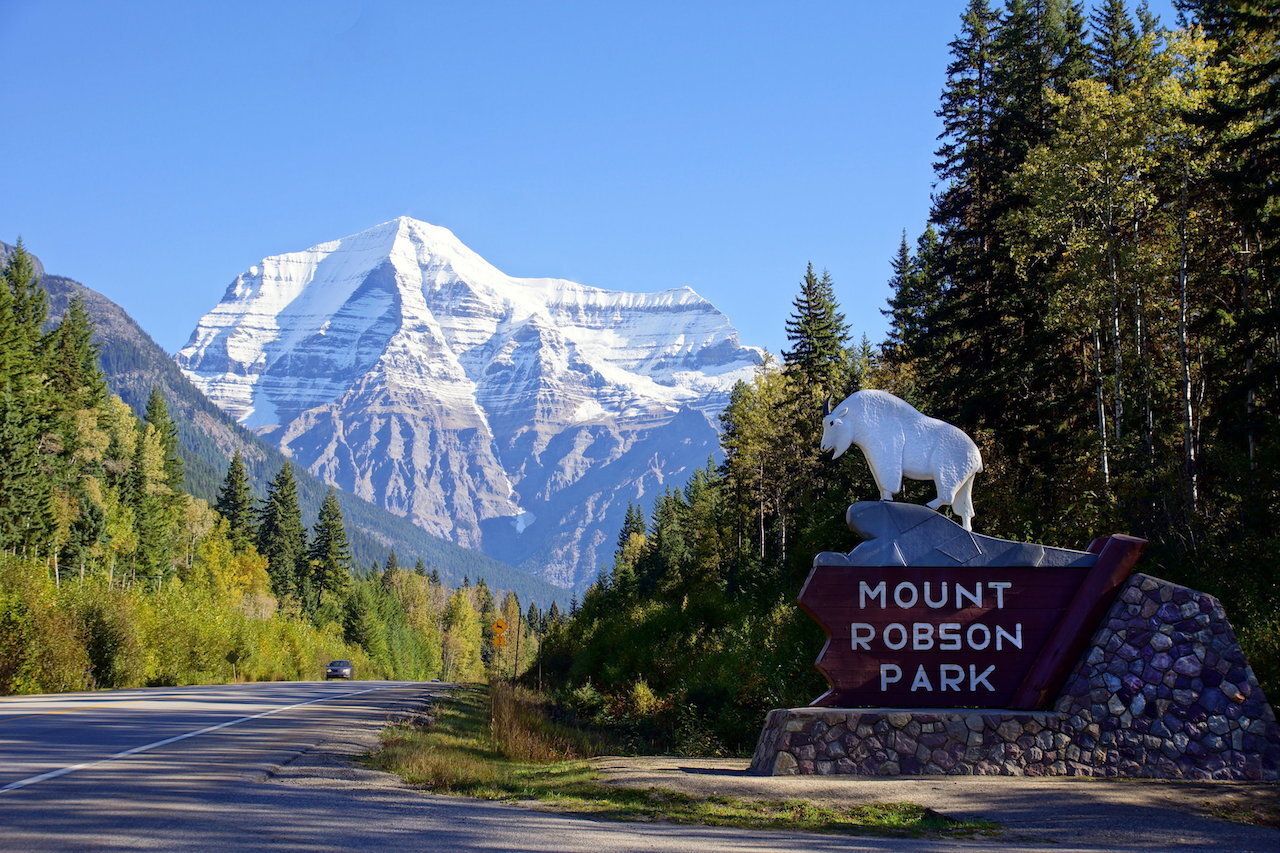 The highest peak in the Canadian Rockies, the 12,972-foot Mount Robson is a giant among giants. The stunning Berg Lake Trail is well known in Canada, rising 2,600 feet over 14 miles — most do the picturesque trek across several days, though you could do it in a day if you move fast and ignore most of the viewpoints (not recommended).

If you’re not one to backpack, check out the headwaters of the Fraser River, hike to the spectacular Kinney Lake, gaze at Rearguard Falls, and go for an afternoon paddle on Moose Lake. This may not be as popular as some of the Canada national parks, but you’ll still need a permit if you want to do an overnight on the Berg Lake Trail. Note that some campsites were damaged in flooding, so keep an eye on what campsites will be open before making your backpacking plans. 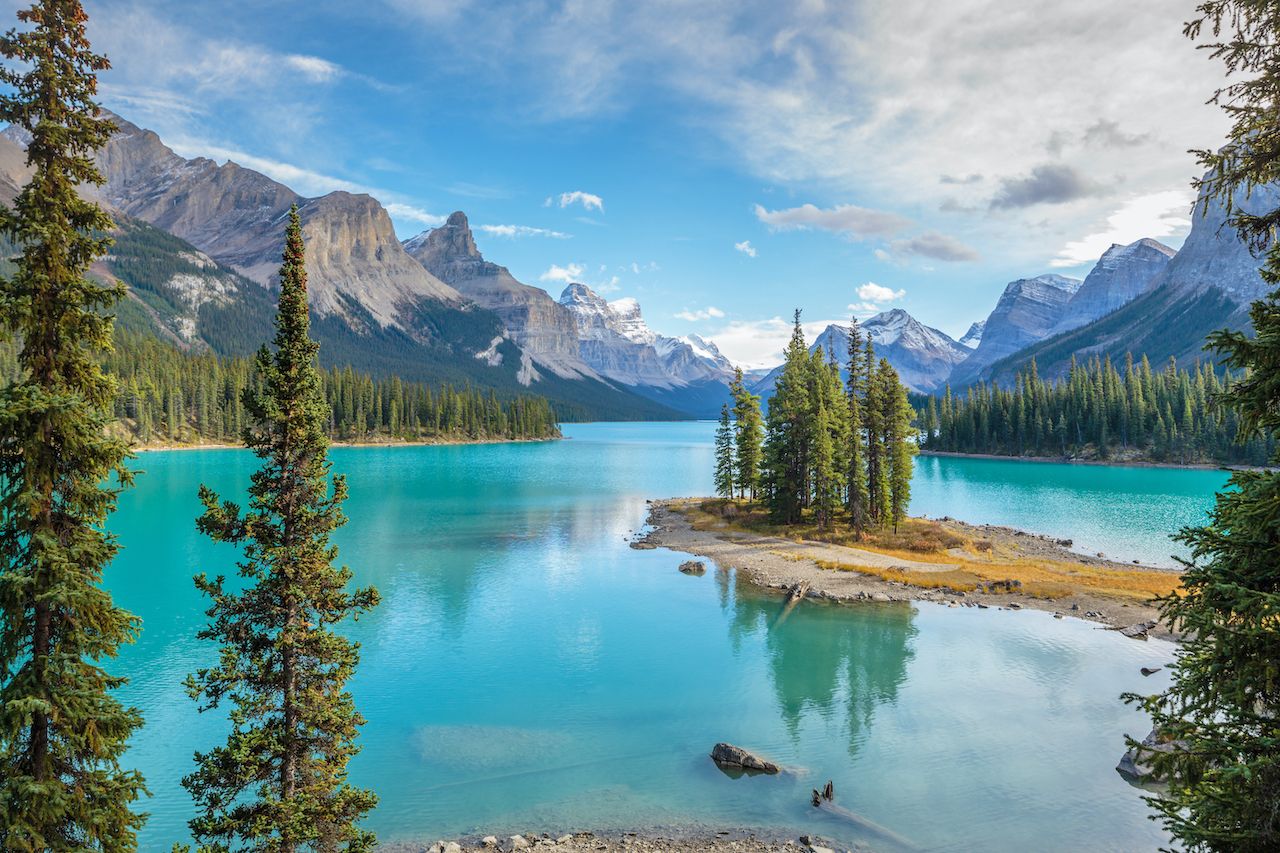 At well over 4,000 square miles, Jasper is the largest Canada national park in the Canadian Rockies. Its views would cement it near the top of this list, but with 2.4 million visitors in 2019, you can’t quite call it crowd-free — even if it does have almost half the visitors of nearby Banff.

That being said, it’s absolutely worth your time, and with its size, it shouldn’t be too difficult to find a corner to yourself. Backpackers and campers can easily avoid the crowds; those who prefer waking up to Italian espresso should look to the 32-room Glacier View Lodge (the only glacier-view resort in Canada) and sign up for a private morning glacial tour of the Columbia Icefield Skywalk. 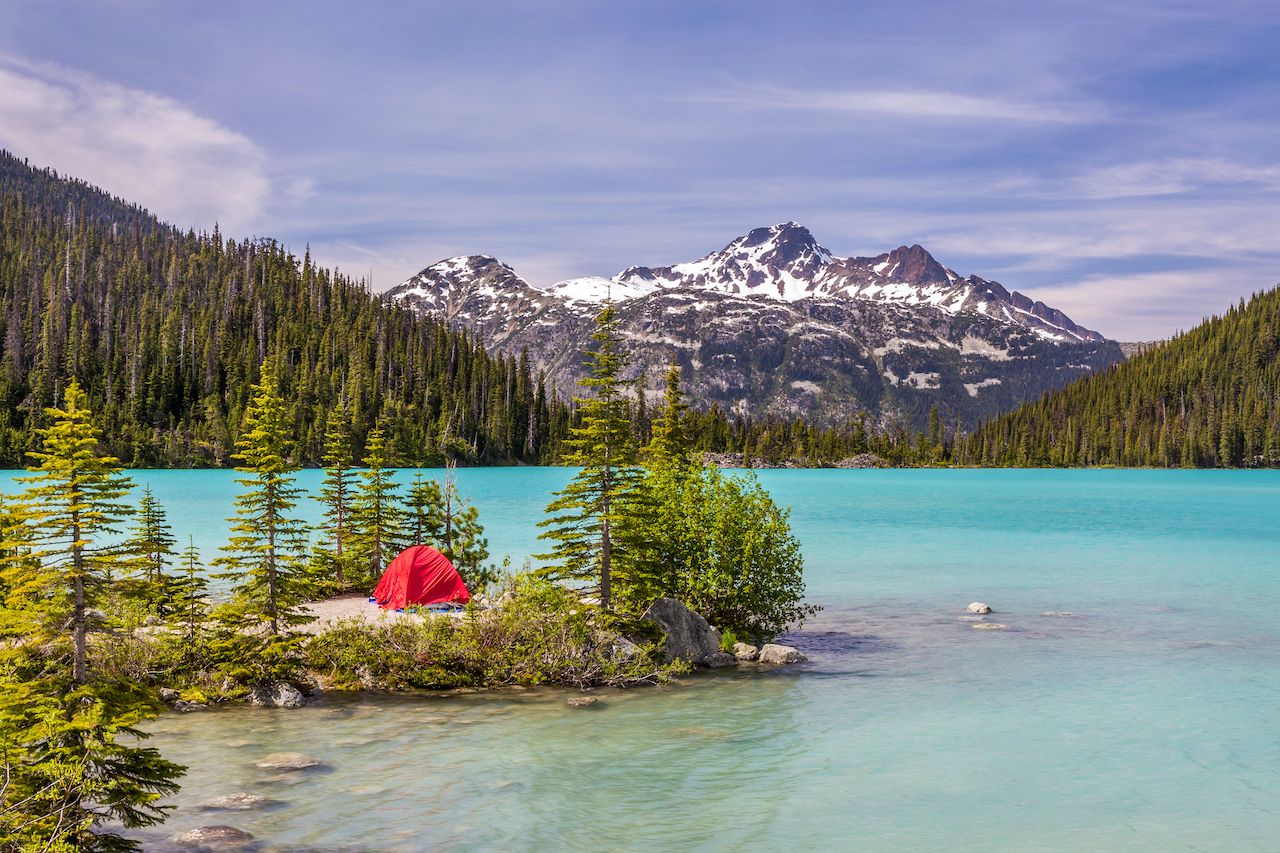 Three glacier-fed lakes — Lower, Middle, and Upper Joffre Lakes — give this park its name, though “park” is a tiny bit of a misnomer. Yes, it’s a park, but for all intents and purposes, it’s a hiking trail. Park five minutes south of Lower Joffre Lake, and in about 2.5 hours, you’ll be resting along the edge of Upper Joffre Lake, where you can camp for the night or picnic on the water before heading back to civilization. 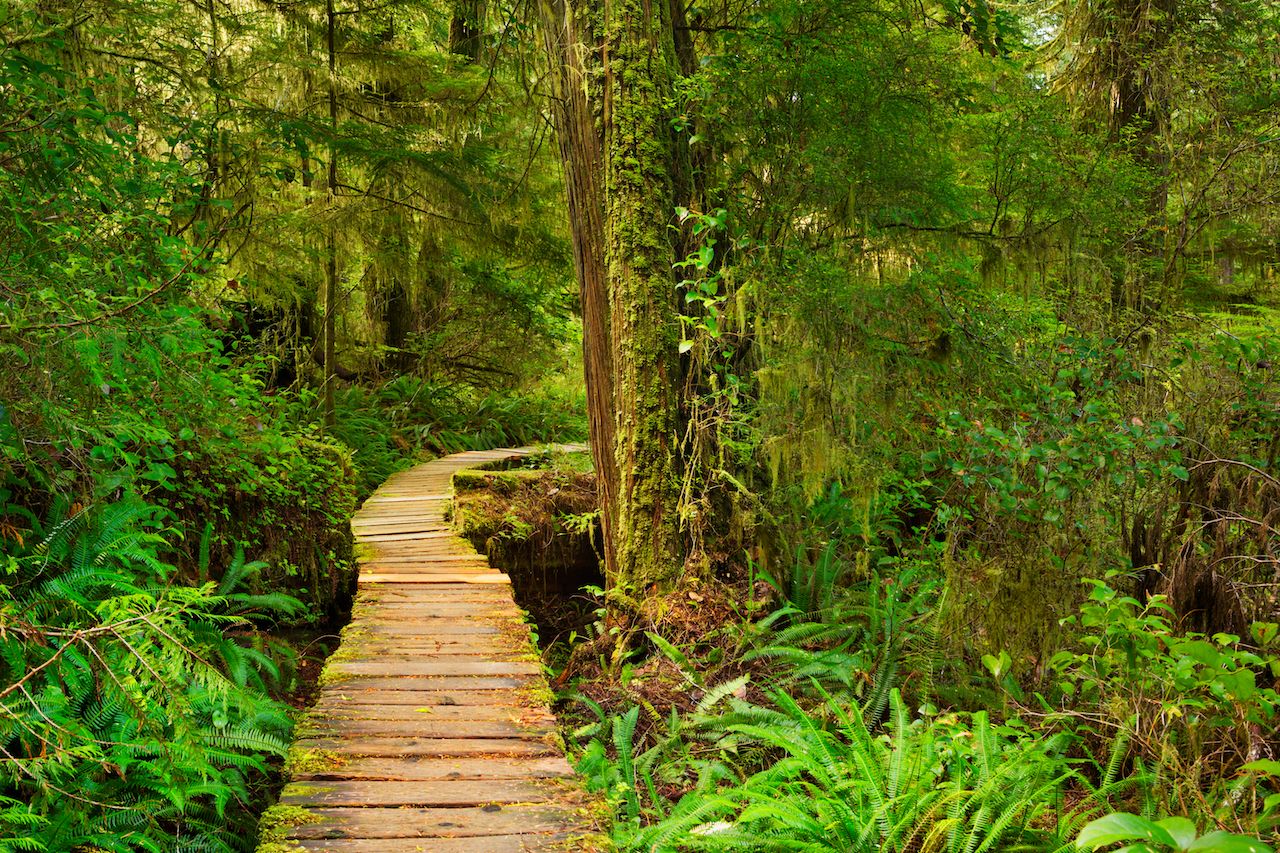 Pacific Rim passed the one-million-visitor mark last year, making it one of Canada’s more popular parks. It’s on the southwest side of the famously wild Vancouver Island, known for its epic storms and ultra-dense rainforest. But paddle out to the Broken Group Islands or go for days on the West Coast Trail, and those million-plus visitors will be a distant memory. You can stay in any number of towns to access it, but Tofino is one of the most popular. 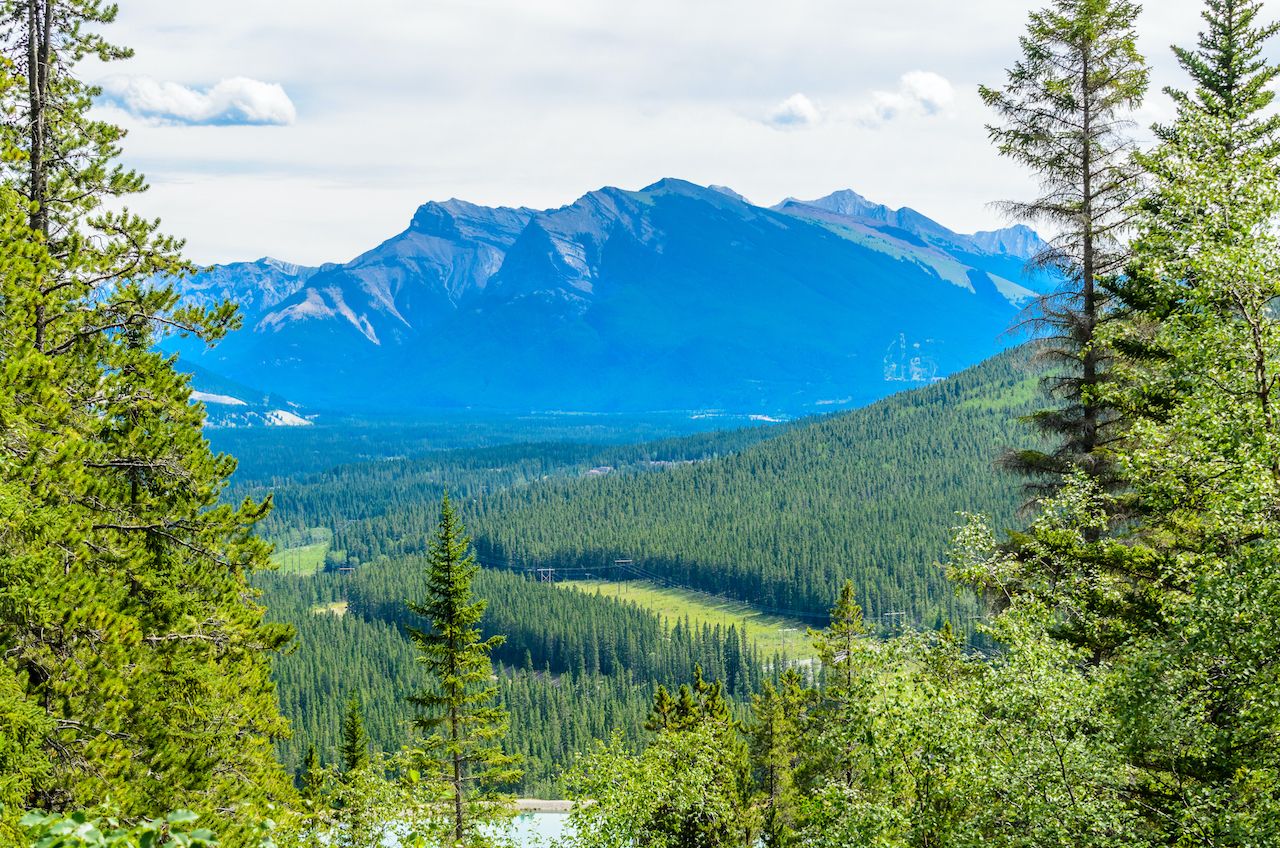 Kananaskis Country doesn’t make this list because it’s not a park — but it used to be part of Banff before it was downsized in the 20th century.

Now, it’s parks, plural — 11 to be precise. Because of its confusing designation (and its proximity to Banff), the trails are rather quiet. The four-mile Read’s Tower hike feels like a Norweigan fjord, the six-mile trek to Sarrail Ridge would be one of the best if it was in Glacier National Park, and the easy 2.5-mile Grassi Lakes hike will get you your own private Moraine Lake-esque experience. And there are dozens more, each tucked into a corner of the Canadian Rockies that could be all yours.

CampingFrom Tents To Glampsites, Camping Will Be Our Savior in 2020
Tagged
National Parks Canada
What did you think of this story?
Meh
Good
Awesome