Hear the name Valencia and most likely you’ll think of oranges. Oranges were first brought to Valencia by Muslims, aka the Moors, in the 10th century. They loved their colorful aromatic properties and used orange trees to decorate mosques, palaces and courtyards. Nowadays fewer farmers work their orange fields in Valencia, but the fruit is still a symbol of the city. Orange blossoms are included in bridal bouquets, the color appears on football jerseys, and the word orange is even used as a term of endearment. In Valencia, food is part of the city’s identity.

Valencia’s old town center Barrio del Carmen is packed with churches, restaurants, towers, pastelerías (cake shops) and narrow alleyways leading off in all directions. An enticing blend of Roman and Arabic architecture is a nod to the city’s early residents, but of the most impressive buildings in the city is the Mercado Central.

At just over 86,000 square feet, this vast cathedral-like space with a roof made of iron girders, glass panes and wood, contains 1500 food stalls. There’s a feast of delights to taste, including paper thin slivers of jamón ibérico, gooey cheeses, acres of olives and of course, oranges by the bag full. Valencia food is hearty and savory, with Mediterranean flavors and a heavy reliance on seafood.

Valencia is also home to the futuristic City of Art and Sciences, a sprawling complex built on the banks of the river Turia, and a raft of pretty palm trees line the beaches in this area. Local residents say the paella served at the beachfront restaurants is some of the best to be had in Spain. It’s not surprising because the first rice grown in Spain was in the Valencia region.

Lunch is an important meal in Spain and shouldn’t be rushed. Reasonably priced menu del dias, three course fixed menus, are the way to go. Given most restaurants don’t reopen until 8 p.m. at the earliest, because dinner is typically served later in Spain than other parts of the world, you’ll want to set yourself up with enough energy to get through the rest of the day. Or at least until it’s time for a mid afternoon snack.

Whatever the time of day, make sure you leave space on your itinerary and in your stomach for these 7 dishes that make Valencia one Spain’s most legendary food regions. 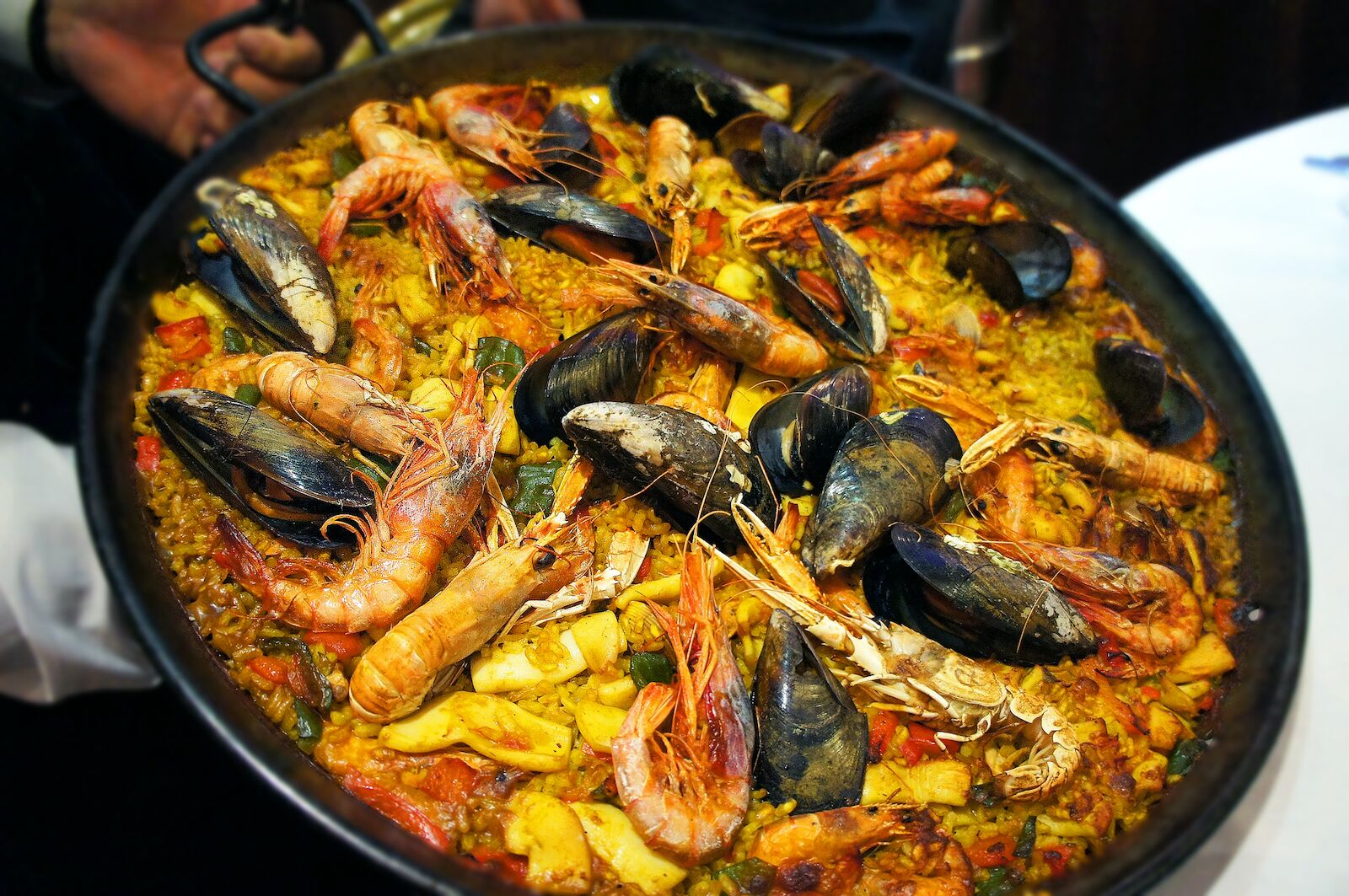 Valencia is indisputably the birthplace of paella, and its certainly the region’s signature dish. Fresh paella is made at lunchtime in paellera, flat round two-handled pans the dish is named for and served in. Traditional versions of this one time agricultural workers’ meal contain chicken, rabbit or snails, and sometimes local white beans called garrafó. Contemporary versions feature shrimp, mussels, and other seafood cooked in squid ink and vegetarian combinations. Make sure to try the socarrat, the crispy layer of rice caramelised onto the base of the pan. 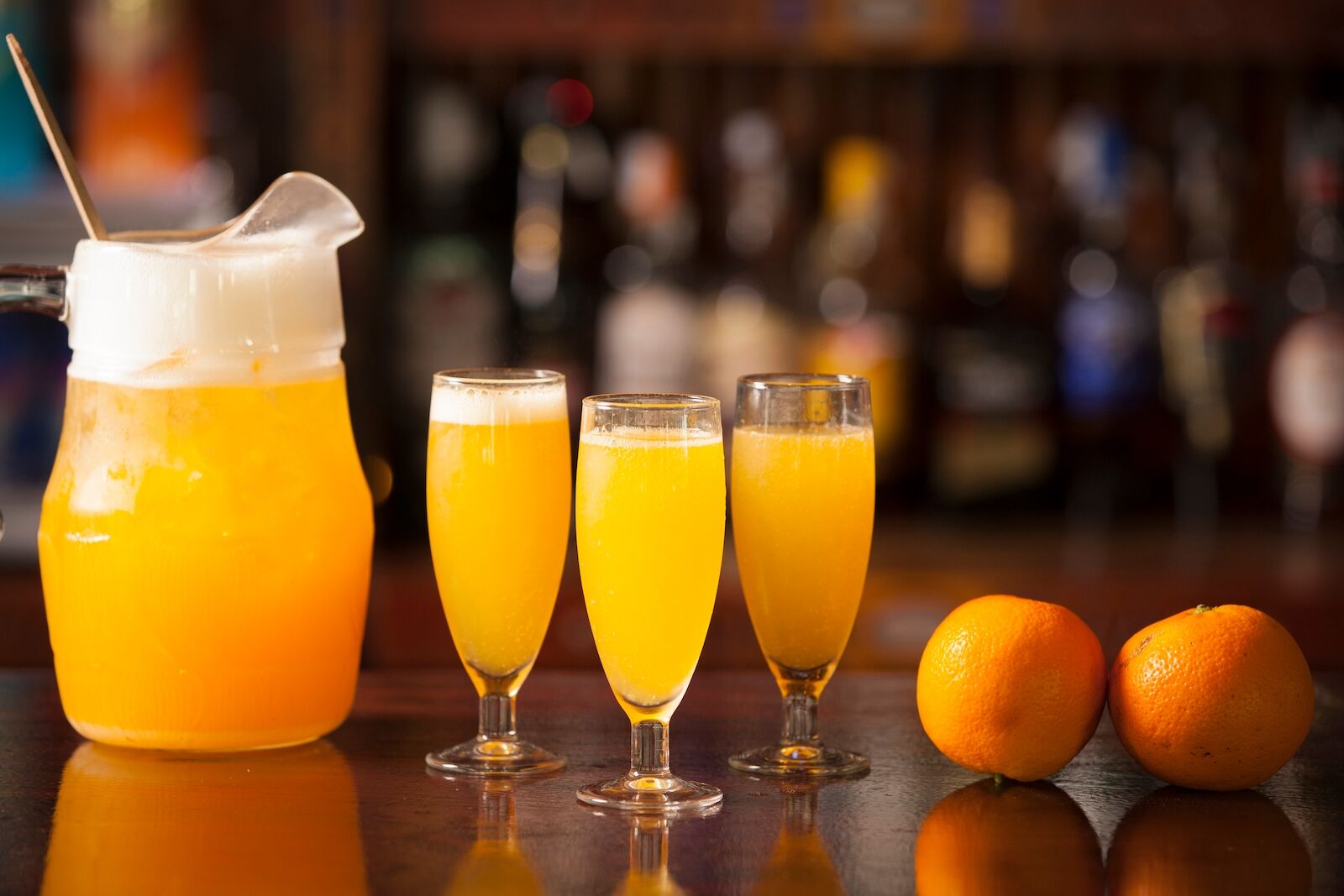 It’s an established fact that oranges are one of the most iconic symbols of Valencia, but in this part of Spain they’re even better when imbibed in a glass of agua de Valencia. The name is slightly misleading because while the name means the water of Valencia, the drink is actually a refreshing cocktail. Cava, a sparkling white or rosé wine originating from Spain, vodka, and gin, are combined with orange juice. It’s comparison to water just goes to show how much the people of Valencia must love to sip this bubbly cocktail. 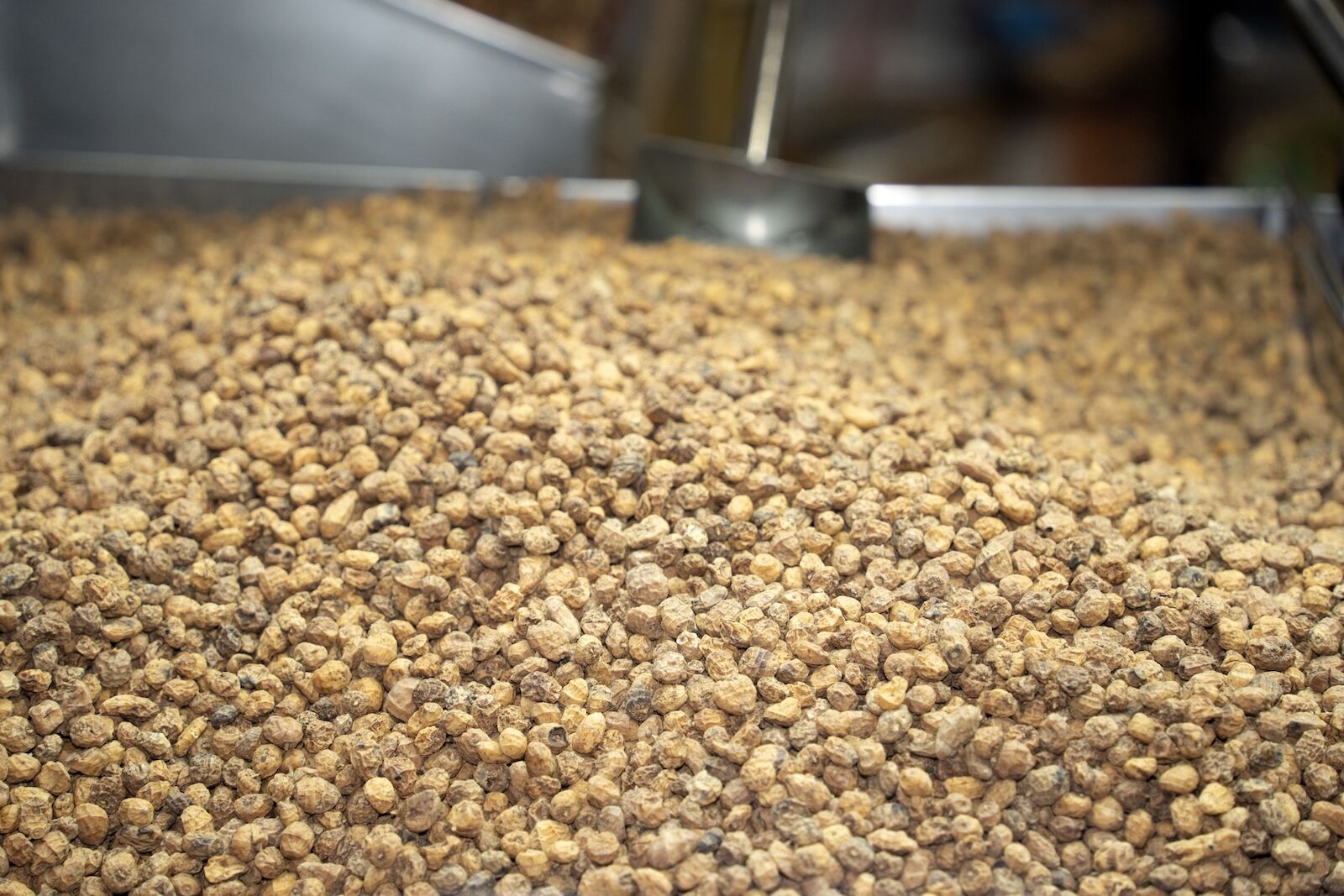 Also known as tiger nuts, chufa are a popular snack sold by vendors in the Plaza de la Virgin and other parts of town. Like agua de Valencia, the name is another misnomer as these so-called nuts are actually a type of edible tuber. Originally from Egypt, they have a wrinkly texture, a sweet almost almond-like taste and are highly aromatic. 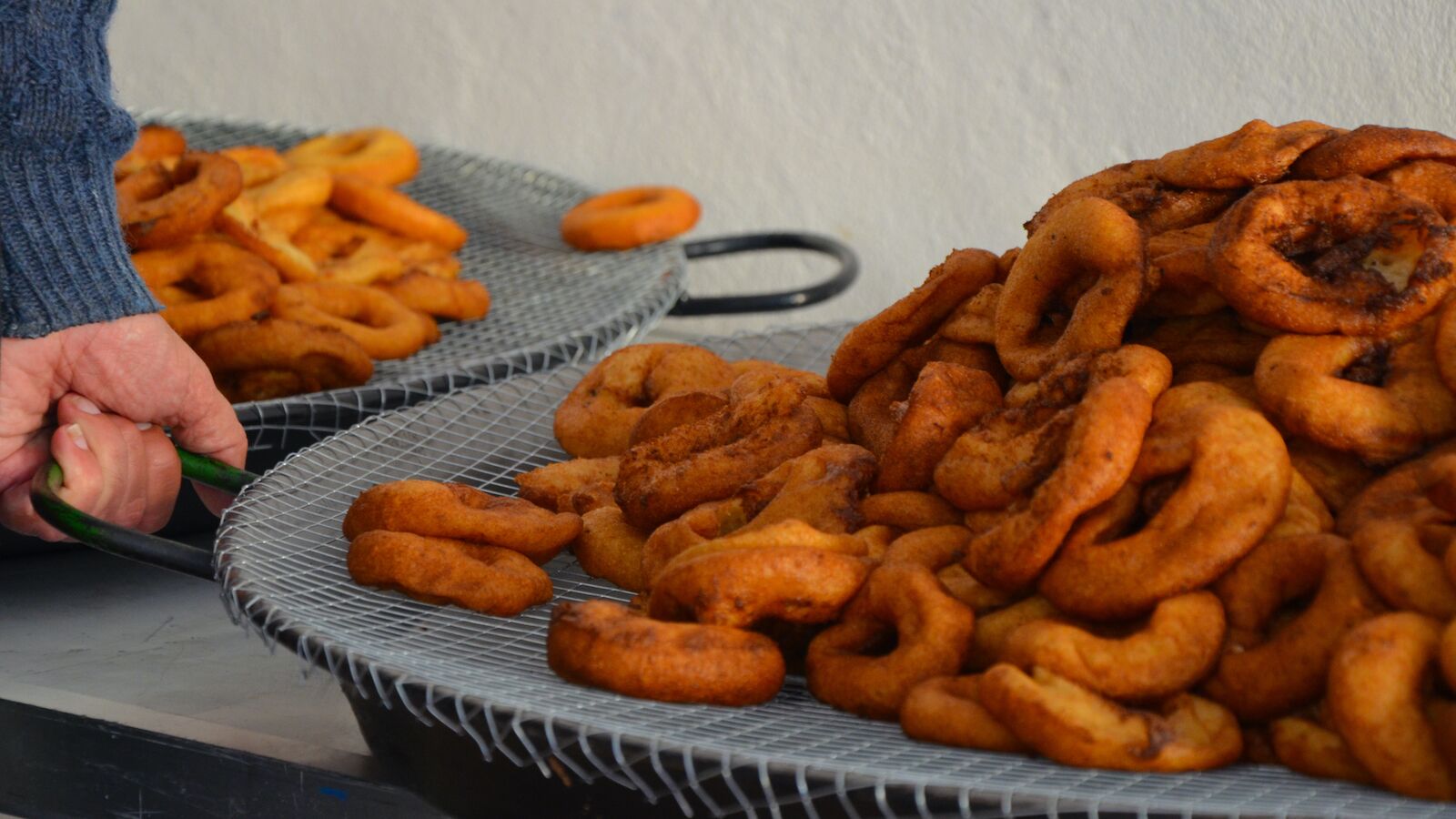 March in Valencia is associated with parades of floats called fallas carrying ninot, giant figures made from wood and fabric, and eating bunyol. Bunyol are a deep fried pastry in the shape of a ball or a ring, liberally sprinkled with sugar. They’re also associated with Lent and the traditional version lists pumpkin as one of the ingredients. 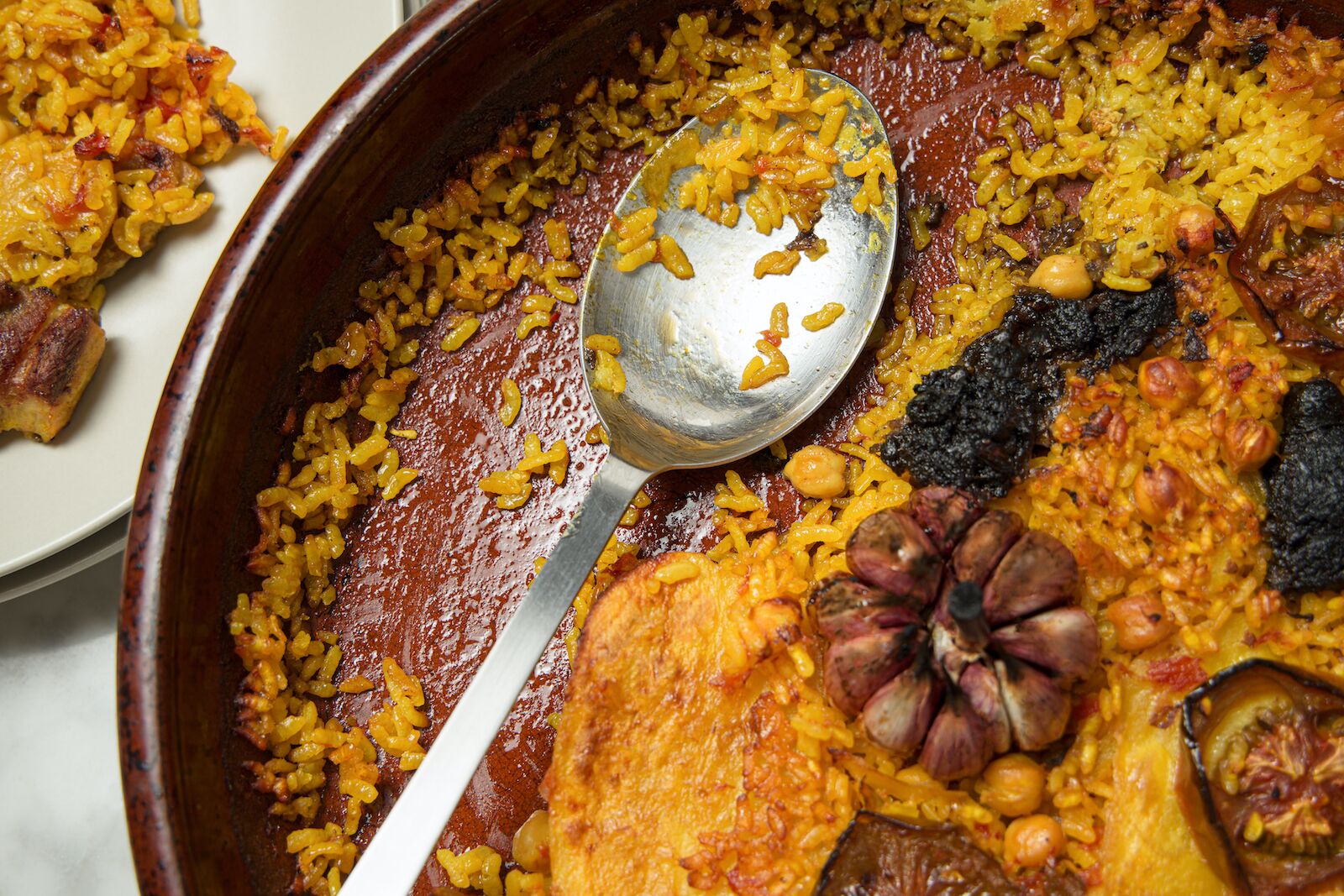 This hearty meal is one of many rice based Valencian dishes. Slabs of pork rib, chunks of sausage and slices of bacon are baked in the oven with a mix of chickpeas, tomatoes, garlic and onion. It’s spiced with bay leaves, a couple of sprigs of fresh rosemary and thyme, and coloured with a sprinkling of saffron. Best consumed at lunch, followed by a long siesta. 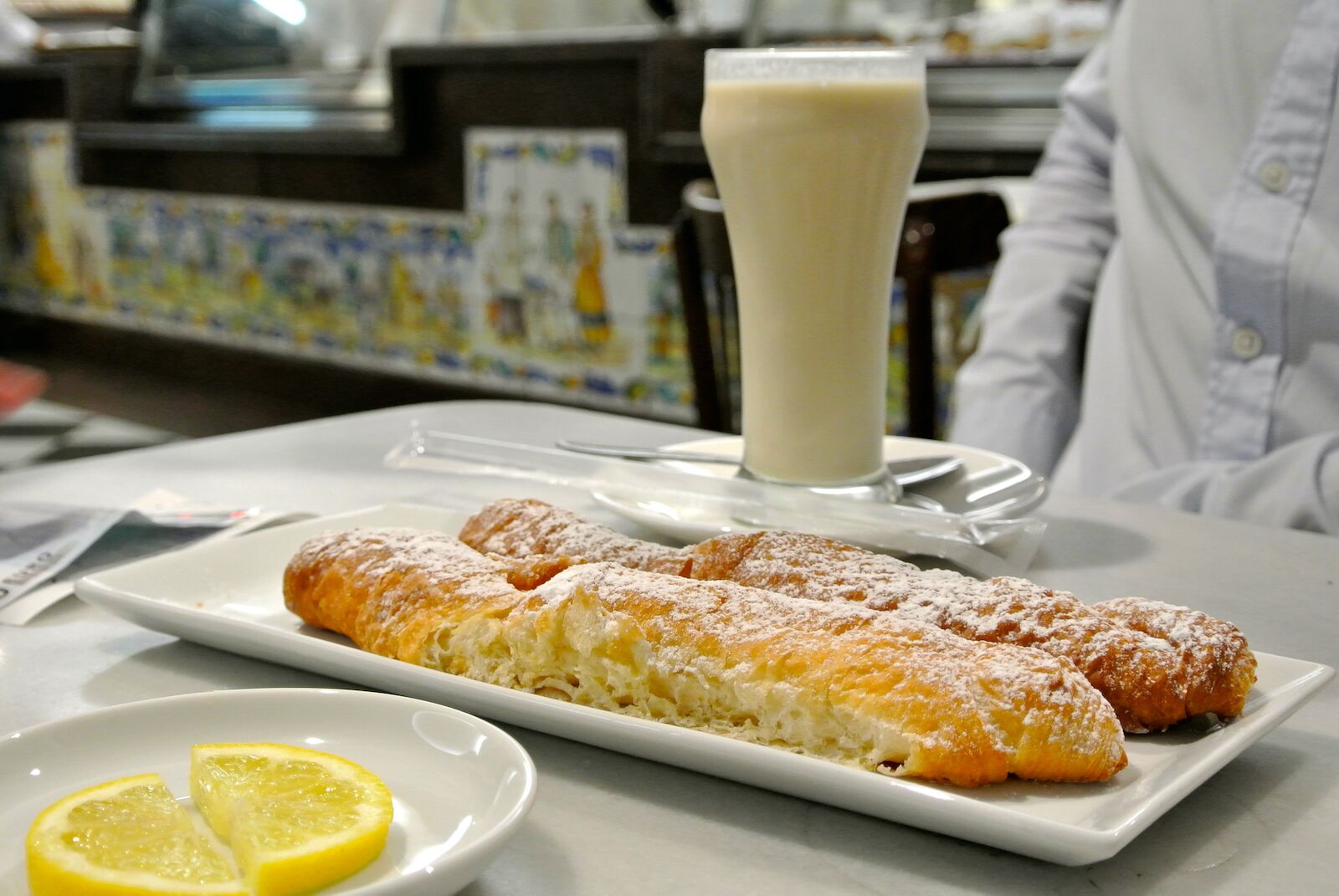 Horchata is the specialty drink of Valencia, known for its refreshing cinnamon flavor that’s best enjoyed throughout the summer. Called orxata in Valenciano, the local language, horchata has a milk-like texture and look to it, but it’s completely non-dairy. Made from tiger nuts, Valencians take this drink very seriously, with numerous small cafes called horchateria throughout the city only selling horchata and sweet treats to go with them. 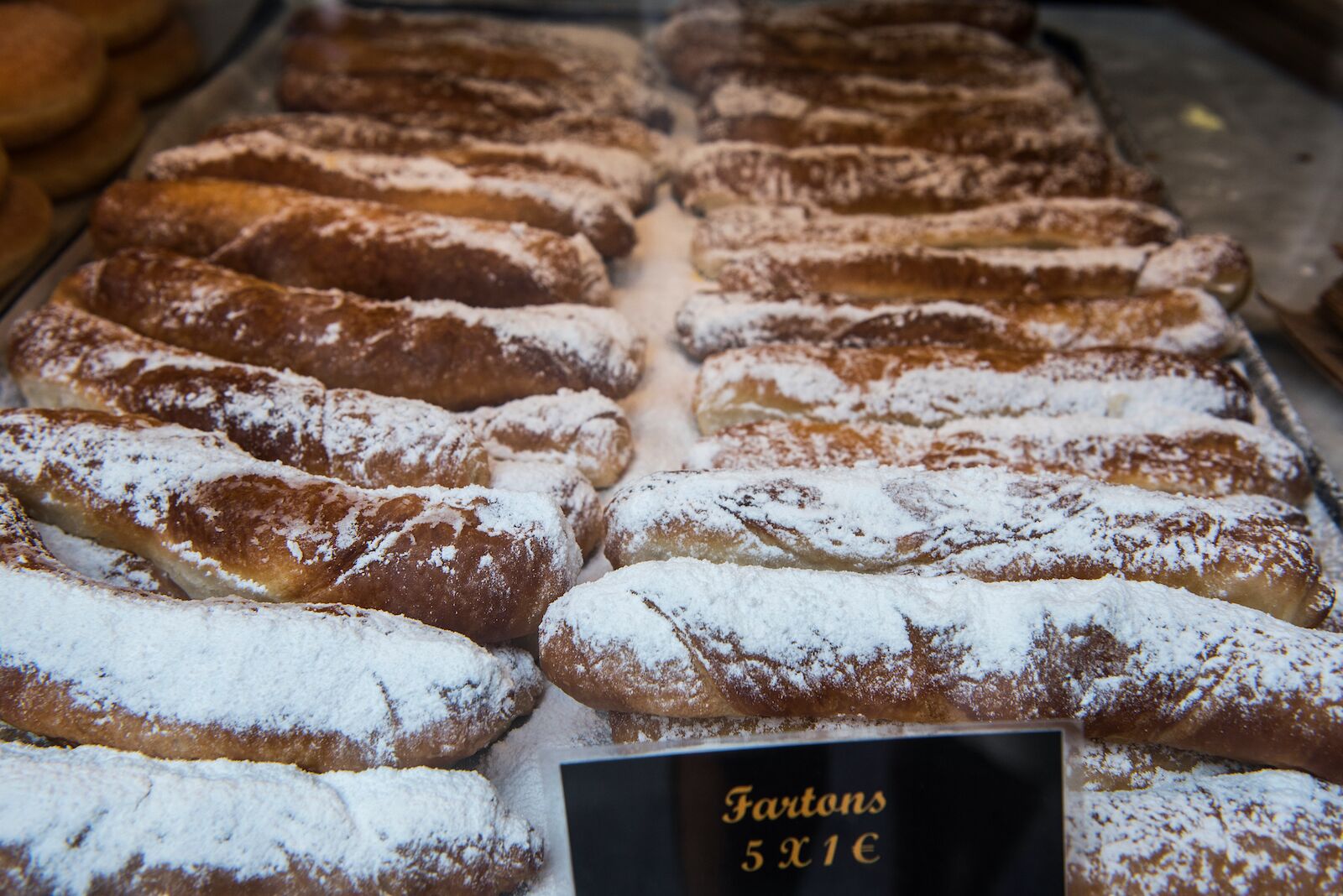 Farton go with horchata like peaches go with cream. The name comes from the word fart, but don’t be embarrassed to say it. In the local dialect this means fed. These thin sweet extra long pastries were specially designed for dipping into glasses of horchata. The light and airy dough means they absorb more of the liquid.

LanguagesFollow This Guide To Catalan To Better Navigate Barcelona Like a Local
Tagged
Food + Drink
What did you think of this story?
Meh
Good
Awesome

Valencia Is the Best City in Spain To Escape Barcelona's Crowds

10 Biggest Parties Around the World