Few Americans might have been aware that Wuhan, China, is known as “The Chicago of the East” before the first half of 2020. Now it’s the most talked-about city on Earth, and there’s a growing interest in understanding more about Wuhan and how people live there, both before the pandemic hit and now that quarantine restrictions have relaxed.

Of course, going there to find out isn’t realistic right now, but a chance to learn about Wuhan — from a local — seemed enticing enough to try out one of many virtual tours being offered now that physical travel is off the table.

So I joined a group of 50 people with Walks — a walking tour company that typically runs tours in cities around the world — for an hour trip through Wuhan. Our guide for this journey was Zhou Akim, an English teacher enrolled at the University of Sydney who, when she’s not in school, calls this city on the Yangtze River home.

Her hour-long slide presentation was both fascinating and somehow calming. Over the course of her virtual tour, Akim showed us that Wuhan is a massive, modern city full of people who do everything outdoors — from drinking tea to conducting business — and prefer noodles for breakfast. 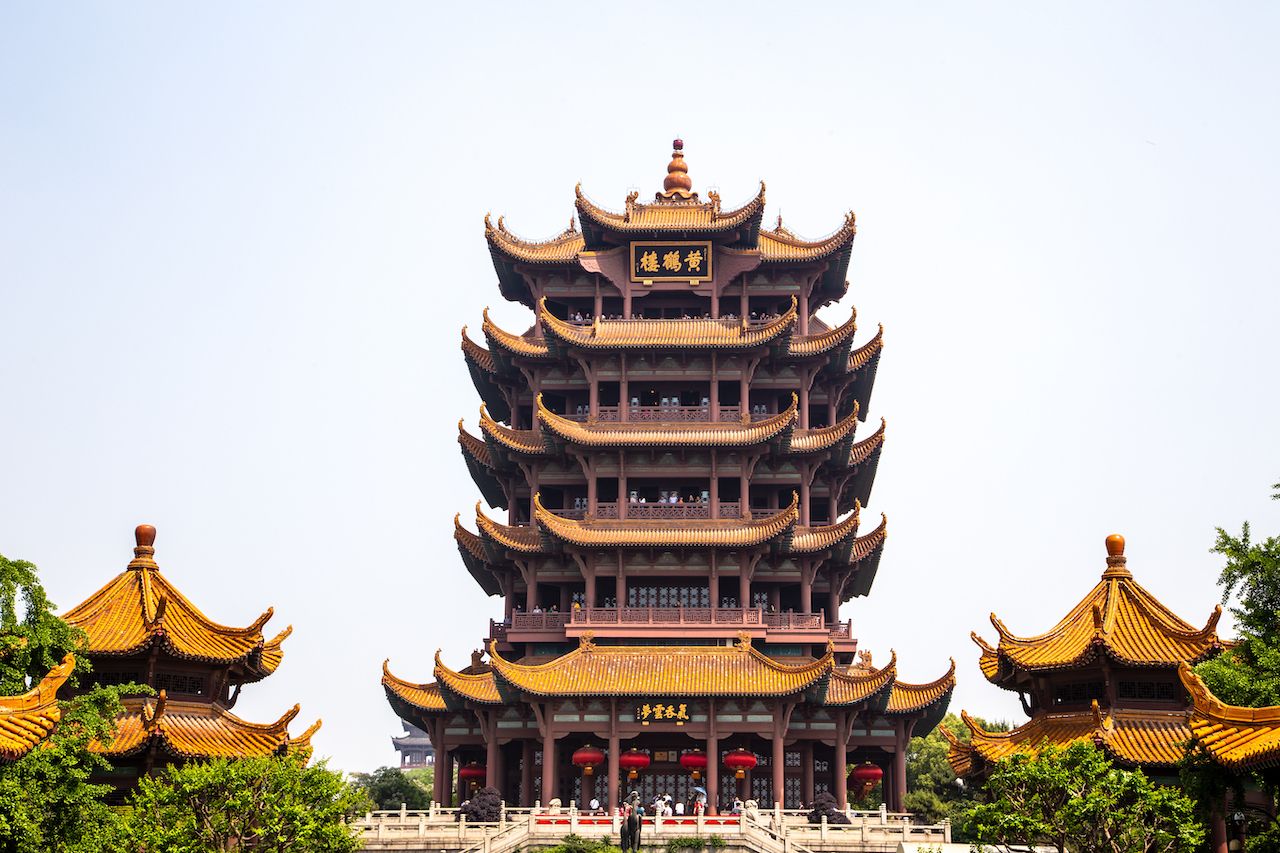 From the start, we got an idea of how truly big Wuhan is — five times the size of London — with a population of around 11 million. The skyline is an impressive lineup of glass towers, centered by the Tortoise Mountain TV tower, making it look almost like a smaller version of Shanghai. Between the modern skyline and the city’s historic landmark Yellow Crane Tower flows the Yangtze River, which glittered bright blue against the green trees on either side.

Akim led us over the Yangtze River bridge, the city’s main bridge, which supports both cars and rail. “The local legend says that if you walk across the bridge with someone special, you find love forever,” she said. 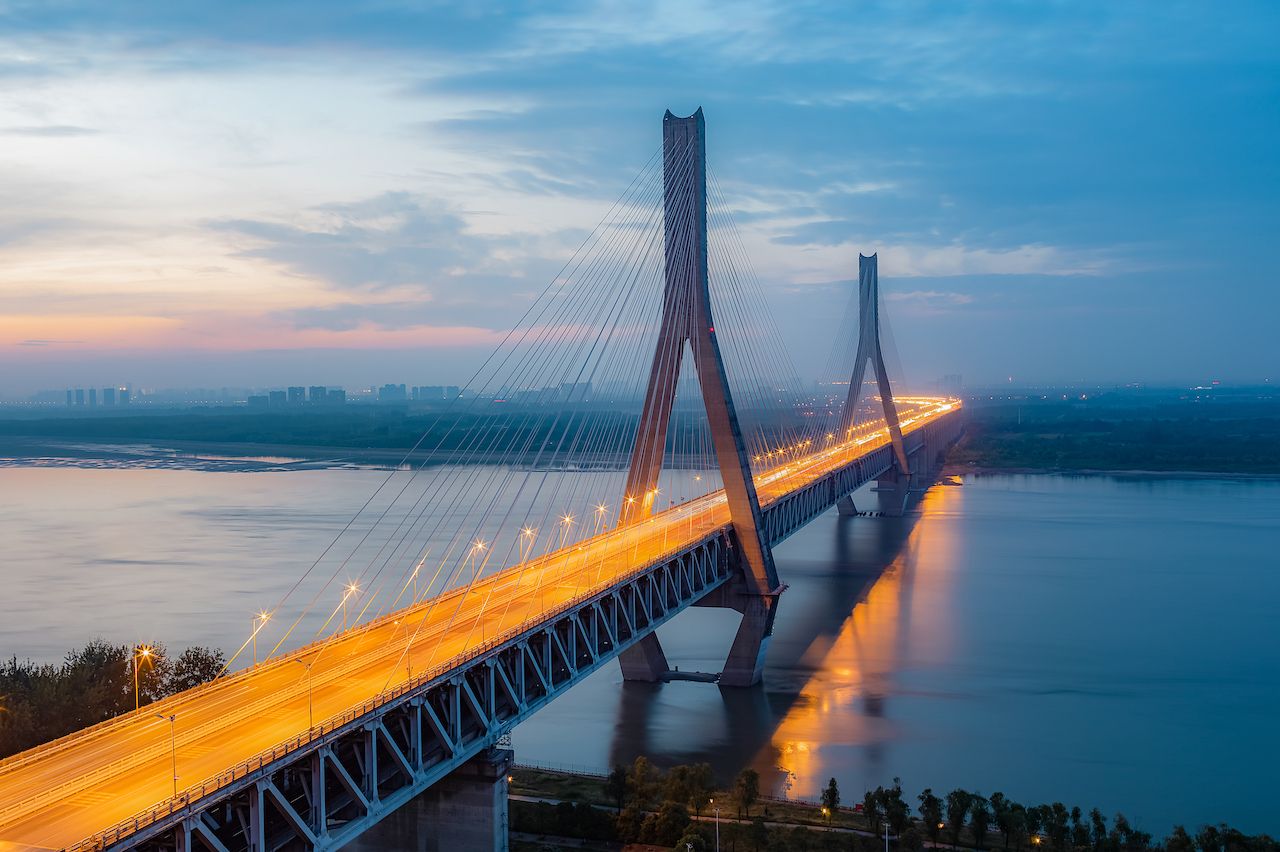 From the bridge, we continued across to the Wuchang district of the city (it was once three separate towns separated by rivers) and Wuhan’s most famous structure, the Yellow Crane Tower.

“According to legend, it began with a wine store owner,” she said of the glorious golden pagoda, which has stood in some form for 1,800 years. “One day a beggar came to the store and asked for drinks, and the owner’s son was a generous man and gave the beggar food and wine. One day the beggar decided to repay his kindness and drew a crane on the wall of the store. The crane was a magic crane that danced on the wall. People came to see it, and the family grew rich and built the tower in the spirit of kindness.”

She then told us that, in truth, the Yellow Crane Tower was actually built as a military watchtower, but it was a nice piece of local flavor and legend — the story you’re looking for when you’re traveling to a new place.

An outdoor culture forced inside 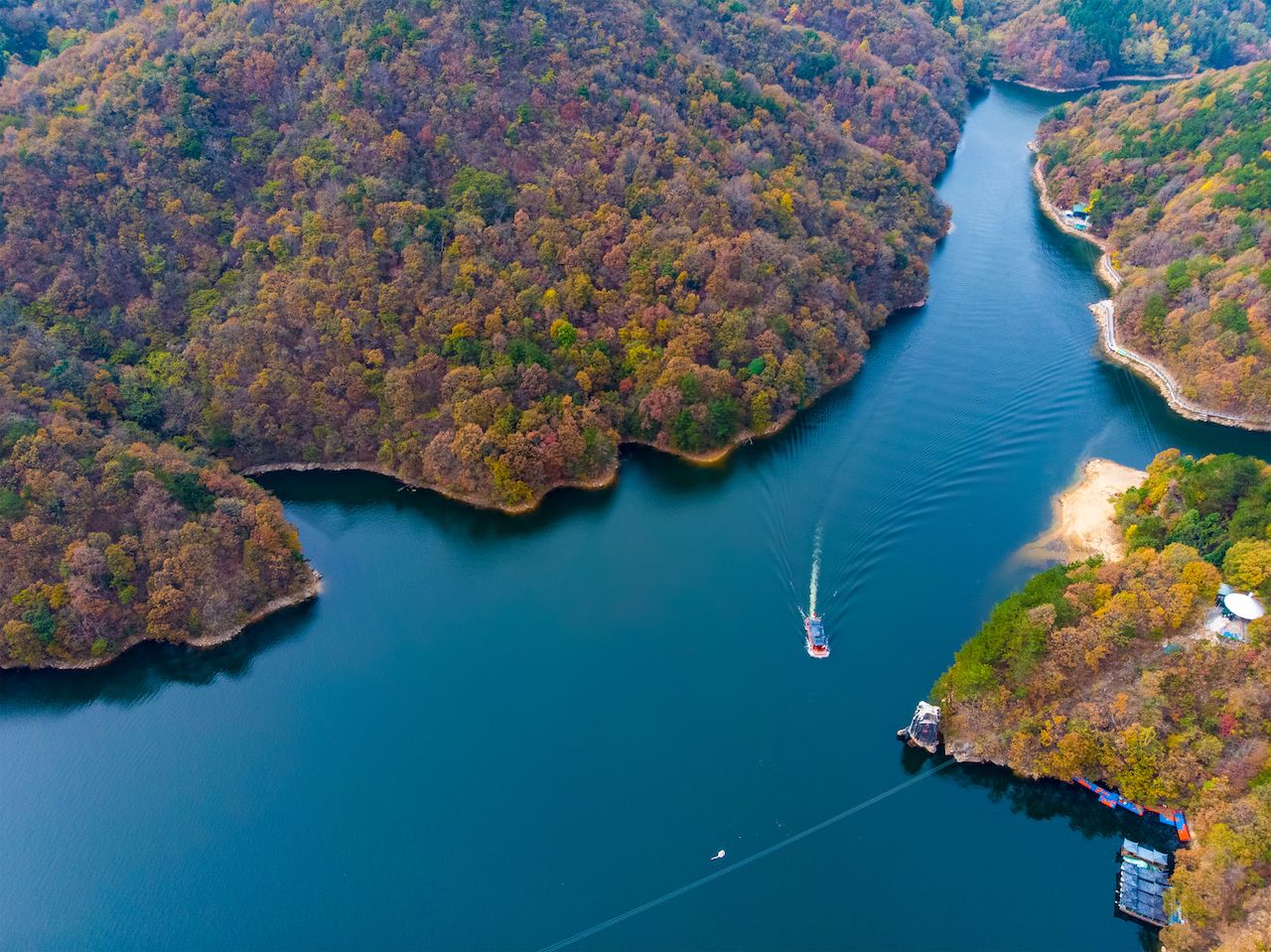 Akim then led us out of town to Mulan Mountain, named after the female military hero who most Westerners will know from the Disney movie of the same name. Akin filled us in on Mulan’s backstory (she dressed as a man to fight in the army), and we also learned that the actress depicting Mulan in the upcoming live-action film hails from Wuhan.

Akim also used the opportunity to tell us about the outdoors spirit of the city. Many residents of Wuhan flock out of the city to hike around the mountain and even prefer to be outside once they’re back in town.

After that, she led us through the Hankou district, “the most amazing place in Wuhan, and also where I live.”

We saw photos of the bustling outdoor antique market where people buy cookware, jade, books, and other household goods. We saw food markets in the open air, similar to those you might find in other places in Asia, like Thailand or Indonesia. 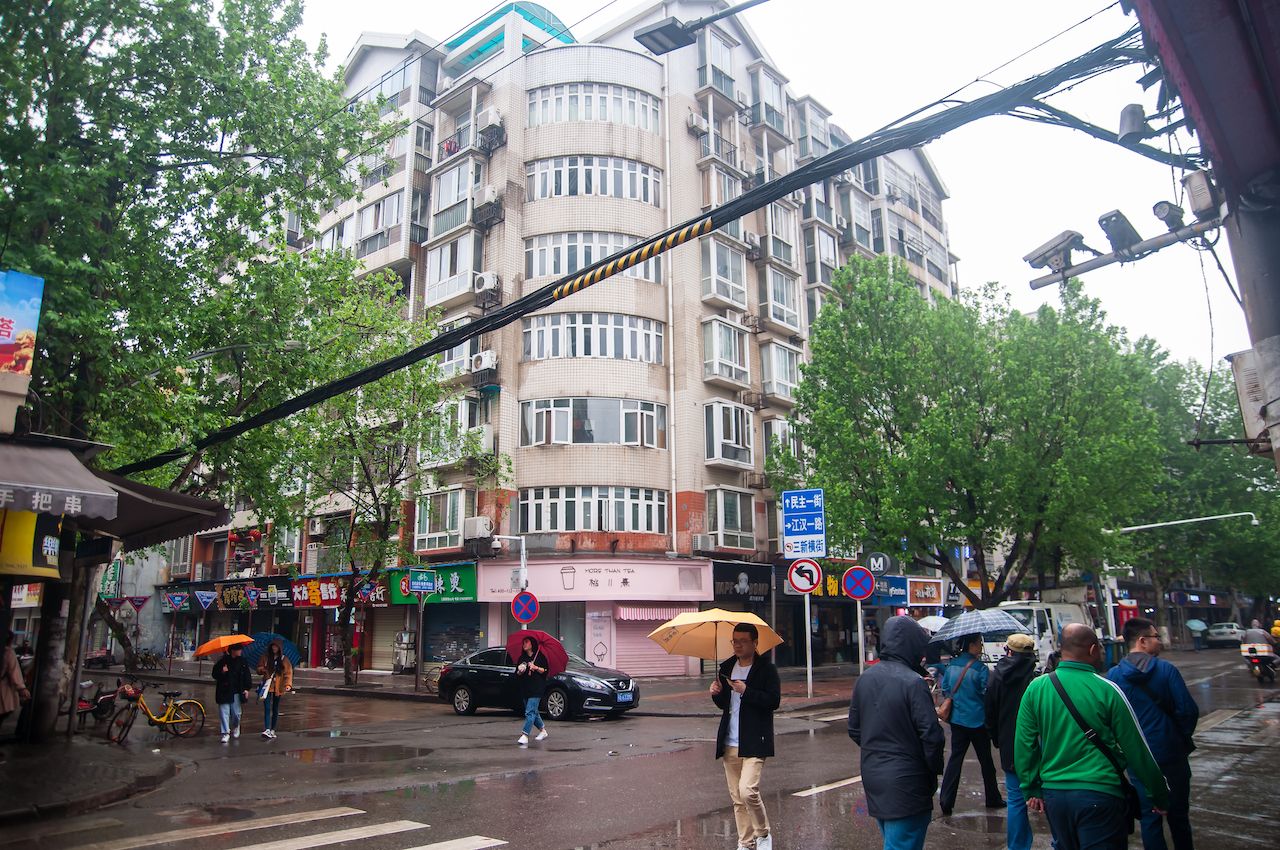 “People live kind of an old-fashioned lifestyle here,” Akim said, sharing that most people prefer shopping in these outdoor markets than grocery stores.

Next, we learned of Wuhan’s breakfast culture and how in this city breakfast is traditionally a meal eaten outside, often at one of the hundreds of tiny breakfast vendors.

“You find a chair to sit in, then you find a larger chair, and that’s your table,” she said, showing images of people enjoying breakfast in alleys between apartment buildings, on pedestrian streets, and in front of breakfast shops. It seems clear that most people in Wuhan are eager to get back to the city’s bustling café culture. 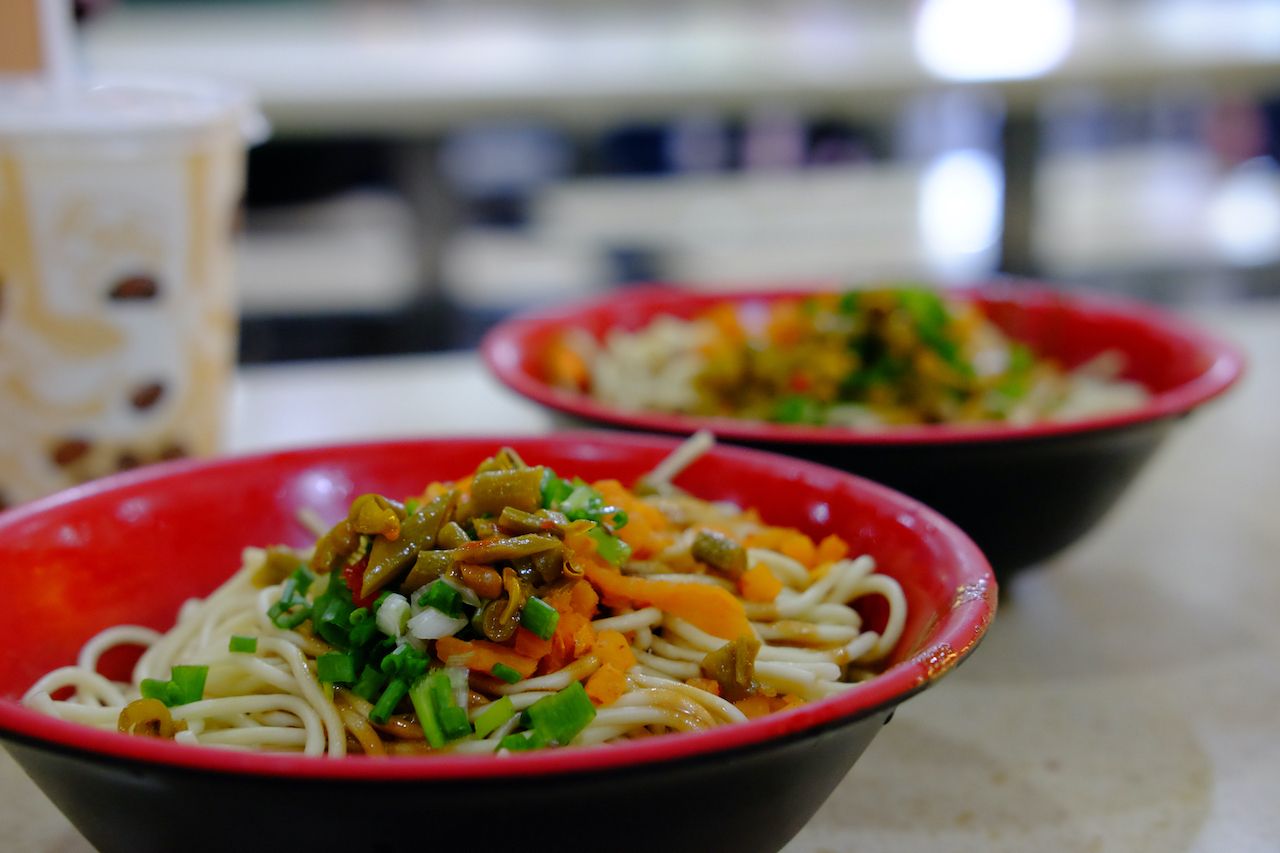 “There are 30 different kinds of breakfast you can have in Wuhan,” Akim said proudly. “That means you can go a month without repeating your breakfast.”

The traditional breakfast foods she showed us are all part of China’s rich culinary heritage: Bean curd, rice cakes, rice wine with eggs, and the famous hot dry noodles.

Lunch was an equally eye-opening experience, with a slide of delicacies like pig knuckle stew, Wuchang fish, duck neck, and steamed pork with rice flour filling our screens.

Barbecue is the most popular food in Wuhan, with stalls lining the streets grilling mostly lamb but also some tofu and vegetables. The style was brought there from the nomads of inner Mongolia who migrated to east-central inland China. It’s become a regional staple here much the same way it would be in Memphis or Kansas City. 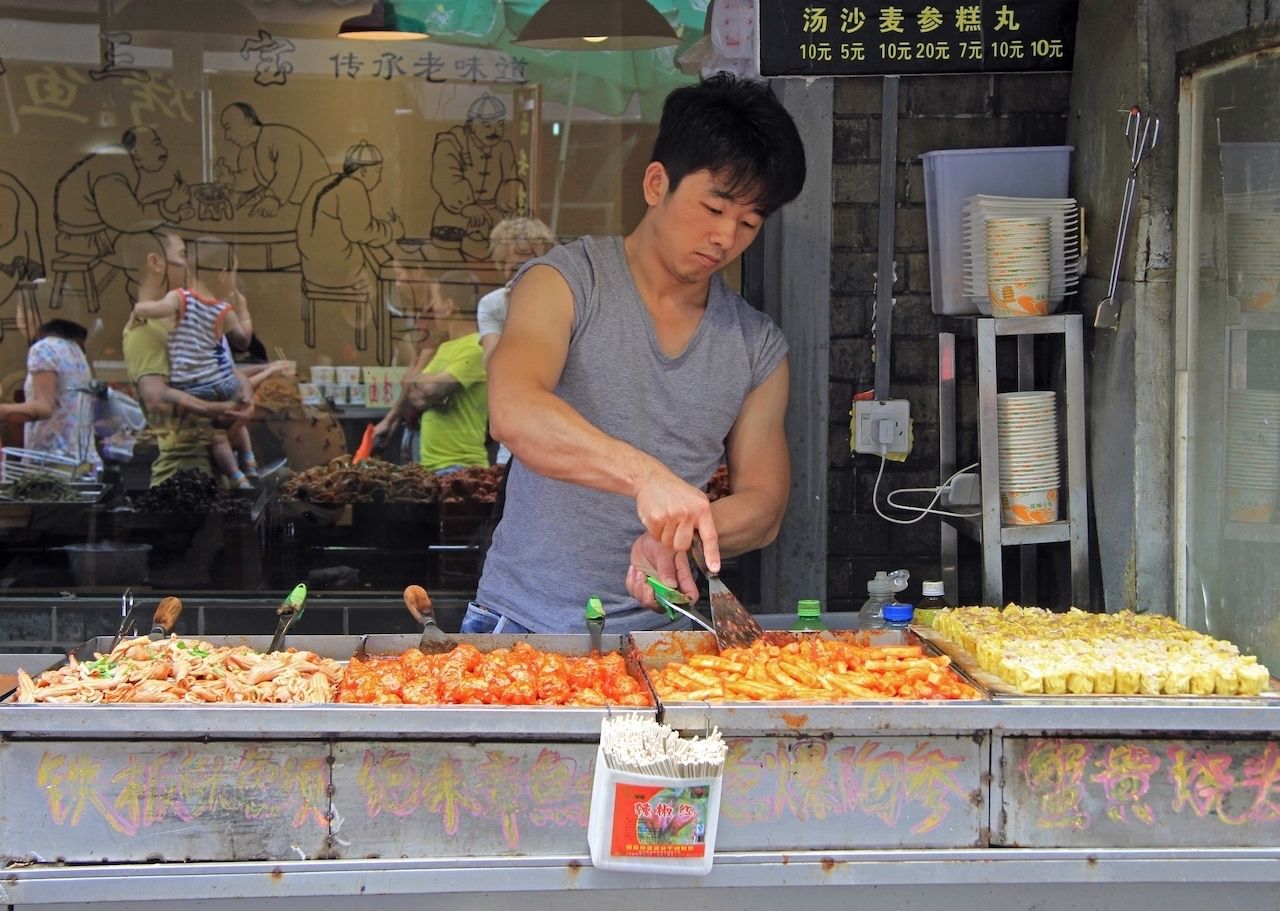 We also learned about the ubiquitous lotus root, the foundational starch in most Wuhanese cuisine. Lotus and rib soup is Wuhan’s local stew, and lotus root soup is the steaming cure-all for whatever ails you. For dessert, Wuhan specializes in a steamed pumpkin rice cake, which has a slightly sour taste.

“My mom was watching TV with me one day while I was babysitting my nephew,” Akim told us. “And she pointed to the screen and said ‘What is that cartoon you’re watching with the steaming rice cake who can talk?’ I said ‘You mean Spongebob?’”

From there we ventured into Wuhan’s maze of tea houses and tea markets, a family business for our guide and a cultural institution. We saw images of people sipping tea and playing mahjong in the shops, some of them clearly European or American laughing and smiling like they were on the deck of a cruise ship.

“People come to the tea market and sit outside,” she said, elaborating on the city’s obsession with the outdoors. “We even do business outside. These people might be having a business meeting. In Wuhan if we can do something outside, we do it outside.” 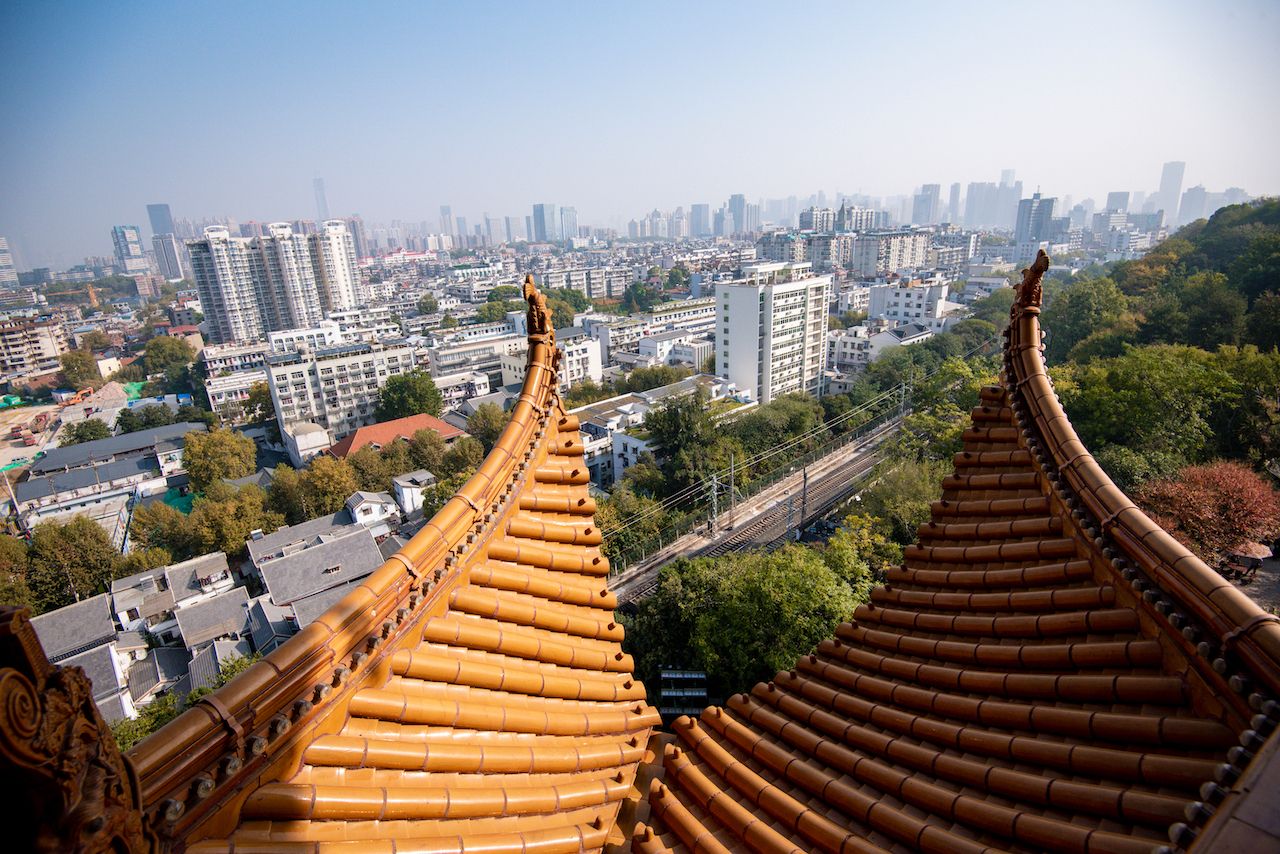 Finally, Akim hipped us to a few local colloquialisms and language nuances.

“People say our dialect sounds grumpy or rude,” she said of the local language. “But that’s not what it’s meant to be. It’s just how we talk.”

She said that people in Wuhan sometimes fight over restaurant checks as a sign of love and admiration for friends and family, and warned us that the local word for zebra — gebama — also borders on profanity.

Finally, we saw some images of life in Wuhan during the outbreak. Akim had been a volunteer during the height of the pandemic, delivering groceries to people, and we saw how she — and others in similar positions — wore white hazmat suits to go about their daily business.

“I remember the first day I went to work, the whole neighborhood was empty, no one walked the streets,” she said. “And the only ones I saw were wearing white protective suits and police.” 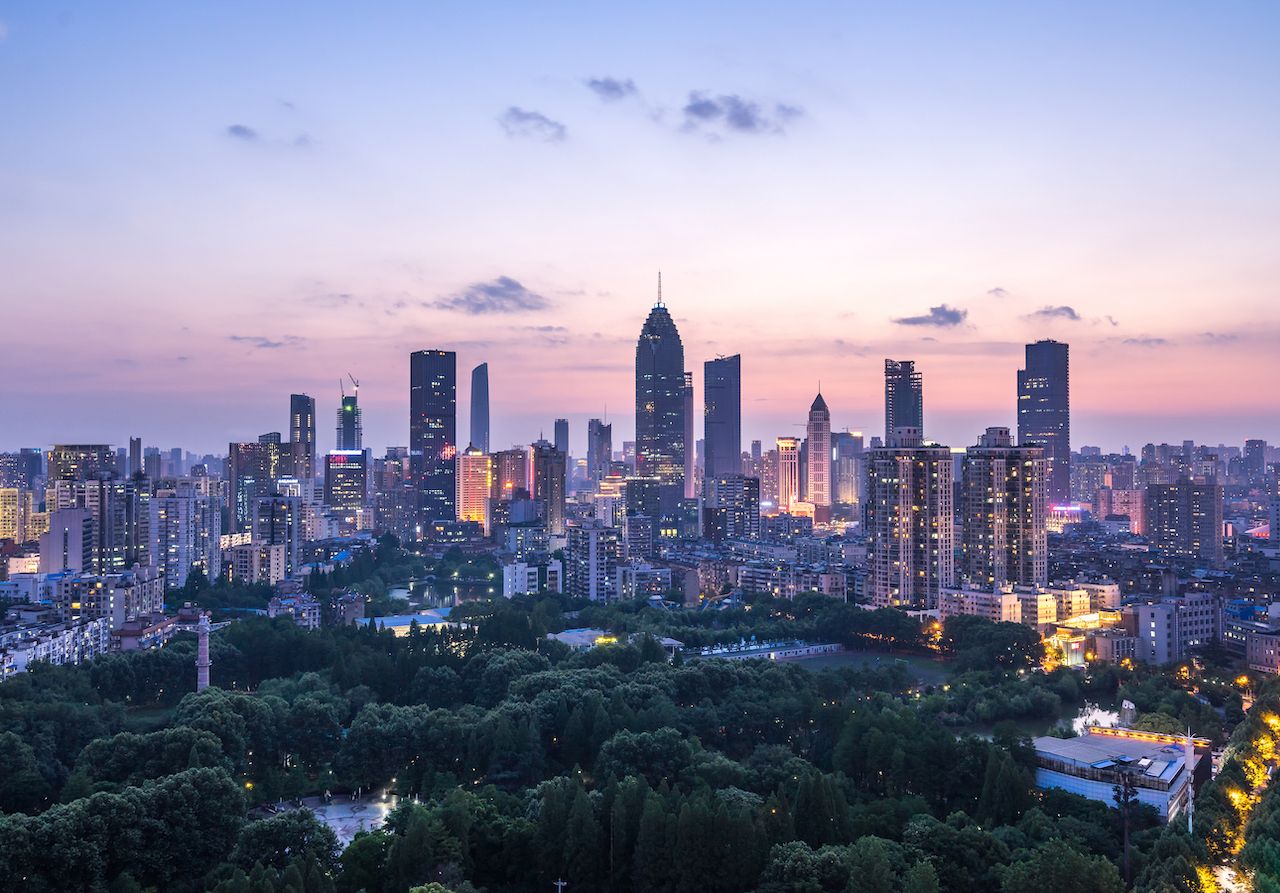 Since April 10, she said, the city has started to slowly return to normal. She showed us a video of the streets, which weren’t totally empty but not how one would imagine a city of 11 million people to look either.

“People are starting to eat breakfast again,” she said hopefully. “But everyone needs to be patient.”

Though our trip through Wuhan was limited to photographs and the words of a local guide, it still gave us a look into a city that’s somehow dominated the news without telling us anything about the place itself. The virtual tour showed us all that Wuhan is a city in which tradition meets technology, where people love to go hiking and take breakfast very seriously.

Walks has two more virtual tours this month — Thursday, May 7, and again on May 14. And if you’d like a virtual tour that sheds some serious light on a place it’s worth getting to know since it became famous, it’s worth the 10 bucks and hour of your time.

In Wuhan, Hot Dry Noodle Vendors Reopening Is a Welcome Sign of Normalcy

China's Phoenix Towers Will Be the Tallest, Greenest Buildings in the World