Though Jamaica is now the land of reggae, colorful coastal towns, and laid-back beach vibes, it was early Indigenous peoples who first inhabited Jamaica. They’re known as the “Arawaks,” or sometimes “Tainos,” and named the island “Jamaica” from an Indigenous word meaning “land of wood and water.”

That name is quite fitting today because there are nearly 100 rivers and at least 50 waterfalls in Jamaica scattered across the Caribbean island’s mountainous interior.

However, most tourists stick to visiting well-known Dunn’s River Falls. It’s beautiful, but hundreds of tourists climb it daily, and it always feels a bit crowded. Fortunately, travelers can beat the crowds at these lesser-visited but equally unmissable waterfalls in Jamaica. Some are easy to find, while others will take travelers deep into the lush greenery and humble villages of the island’s interior. And pack accordingly in terms of water and snacks: there are very few concession stands at these stunning waterfalls.

Note that the hiking distances below are estimates, as there can be multiple trails to different areas of each waterfall, and the exact route may chance seasonally. 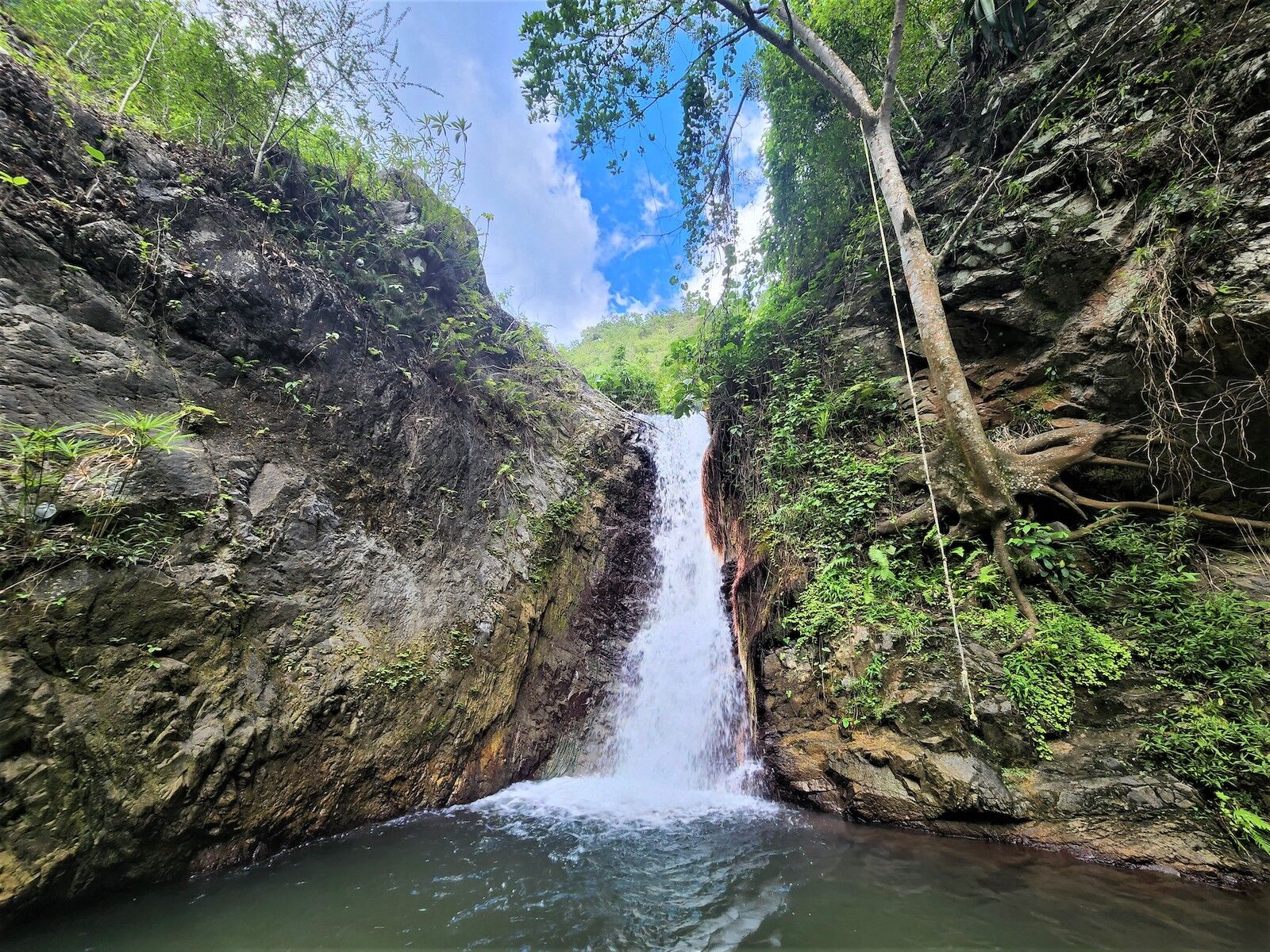 Penfield Waterfall is in Gordon Town, a semi-rural district at the foot of the Blue Mountains near Kingston. This waterfall is three cascades that create three neat swimming pools. There’s a rope swing for jumping into the second pool, usually occupied by local children with no fear as they make impressive jumps into the water. An afternoon swim in the cold refreshing water at Penfield Falls is the perfect way to escape the heat of the city, especially as it’s only about half an hour from Kingston.

From the trailhead, take the trail to the left, which crosses two footbridges over the course of about a 15-minute walk. 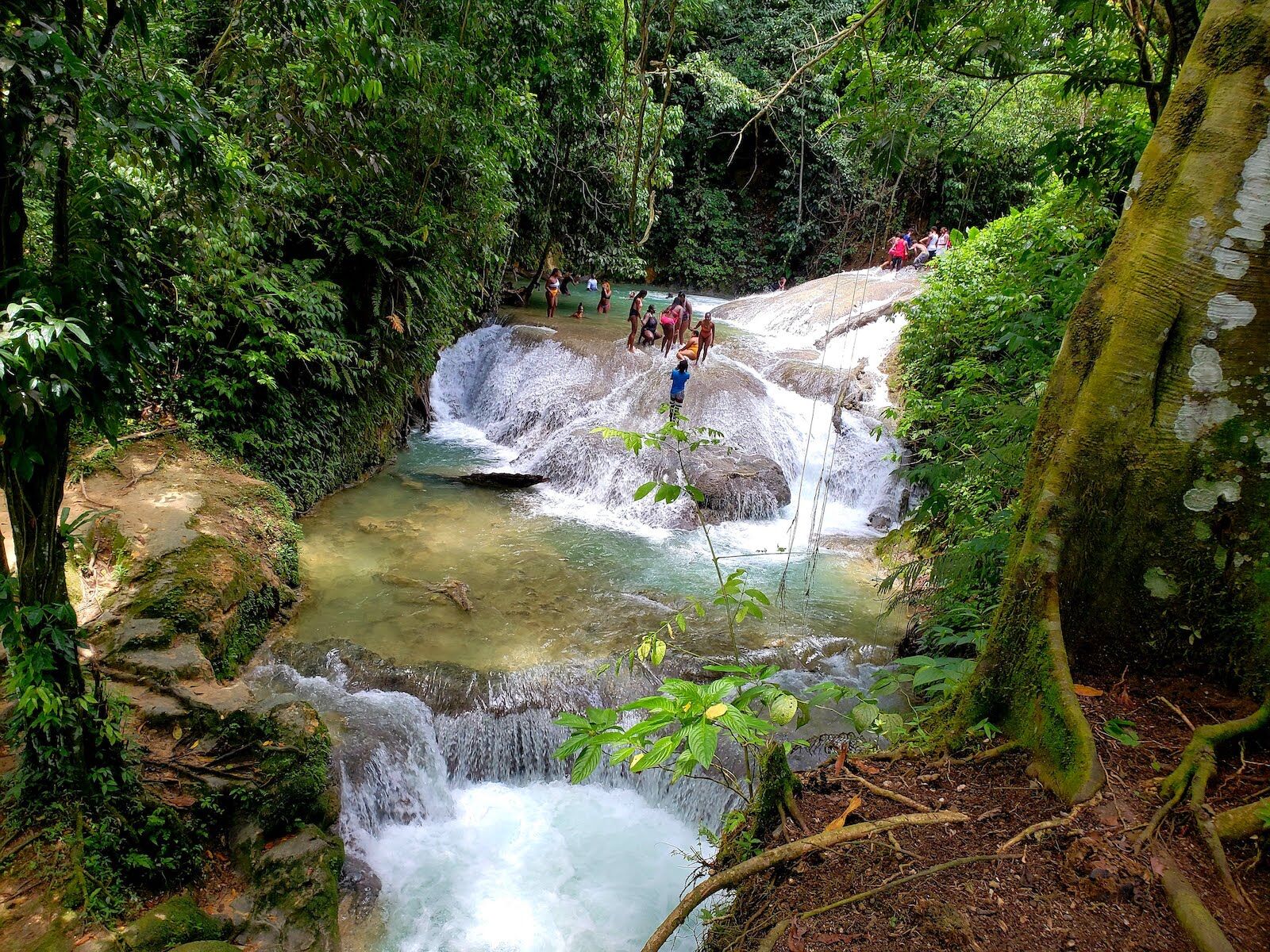 Benta Falls is on the verdant outskirts of the resort town of Negril. It’s where you’ll find not just one of the best waterfalls in Jamaica, but seven. All seven cascades flow under a canopy of tall bamboo stalks, ferns, coconut trees, and other tropical plants.

Visitors can swim and jump into the falls or take a nature walk winding along the river to admire the greenery and surroundings. Very little has been done to modify Benta Falls, and the few surrounding buildings and staircases are eco-friendly. That said, it’s still $20 per person to visit. 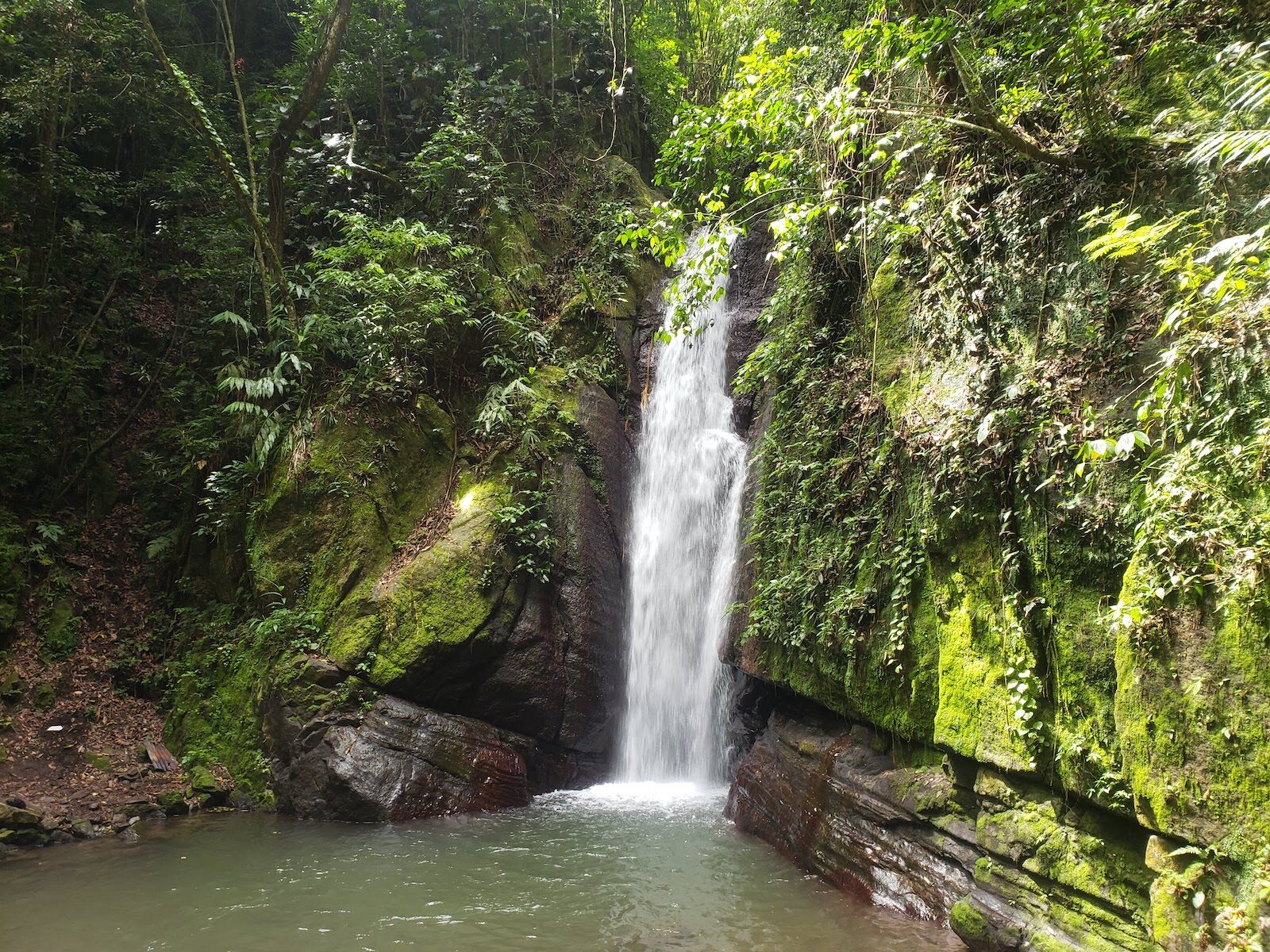 In the semi-rural community of Stony Hill, Falling Edge Falls is another one of the waterfalls in Jamaica still somewhat unknown to most tourists. It’s on the outskirts of Kingston but in the opposite direction of Penfield Waterfall.

Falling Edge Falls is accessible via a short, gentle hike through a lush rainforest of ferns and other tropical plants. This area of Jamaica experiences a high level of annual rainfall, which means it can have a lot of mosquitos. Make sure you pack the repellent.

The hike starts off Airy Castle Road just behind the Bowden Hill Primary School. There’s usually a fee of around $5 to visit, which goes toward trail maintenance. Oh, and it’s also called “Bowden Hill Falls,” depending on who you ask. 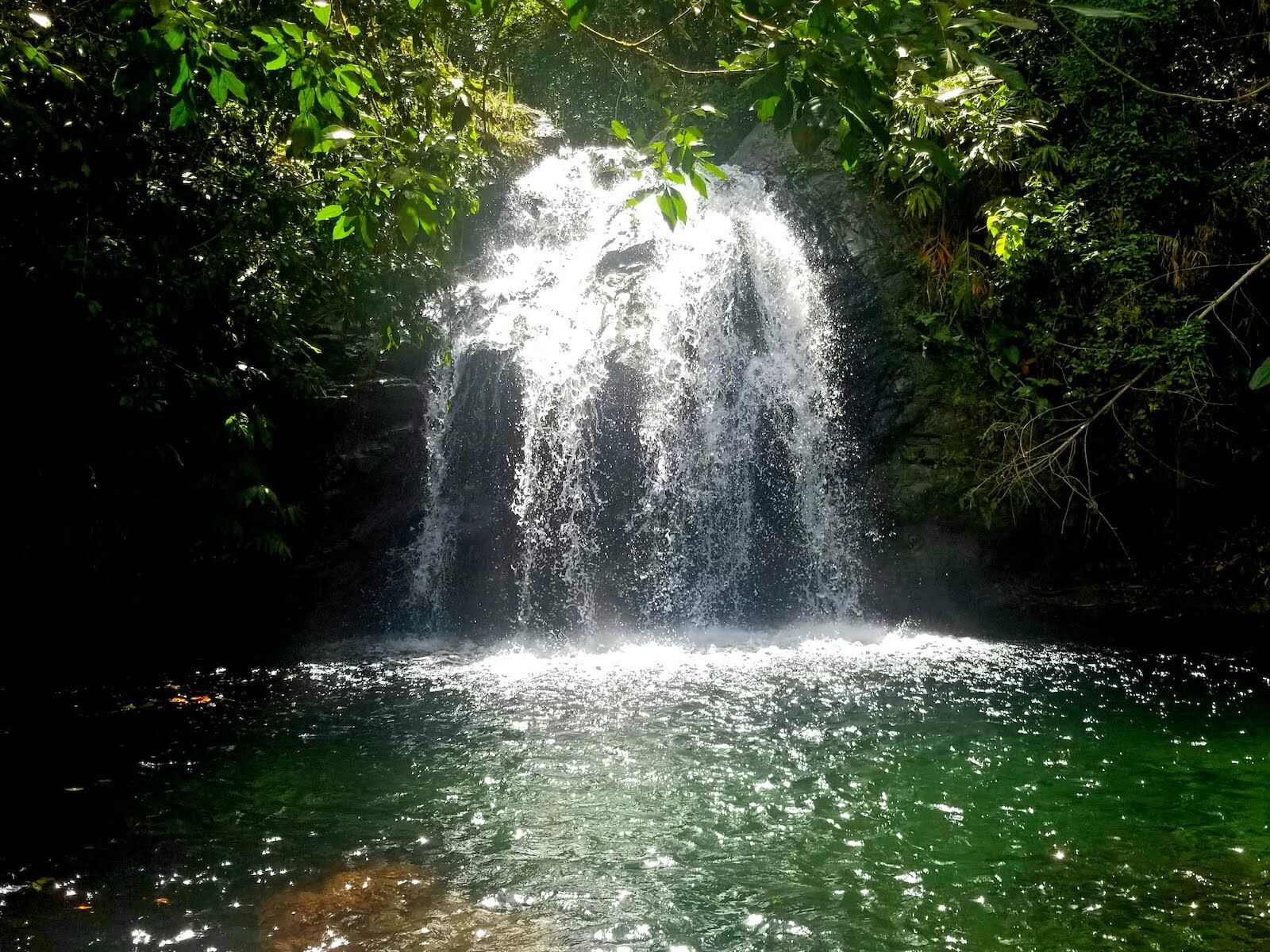 Fish Done Falls is next to the B1 road in the Blue Mountains. It’s the scenic, winding main road connecting the major towns of Kingston and Port Antonio, but it’s primarily one of Jamaica’s main cycling roads.

Fish Done is one of the prettiest waterfalls in Jamaica and is sometimes spelled as Fish Dunn Falls – and yes, there are some harmless fish scuttling around here and there in the deep blue water. You can swim here, but the water is a bit cold, and the falls can be strong, so use caution if you swim near or under the cascade. While there’s no hiking to get to the falls, there are lush surrounds that will remind you you’re deep into the island’s interior. 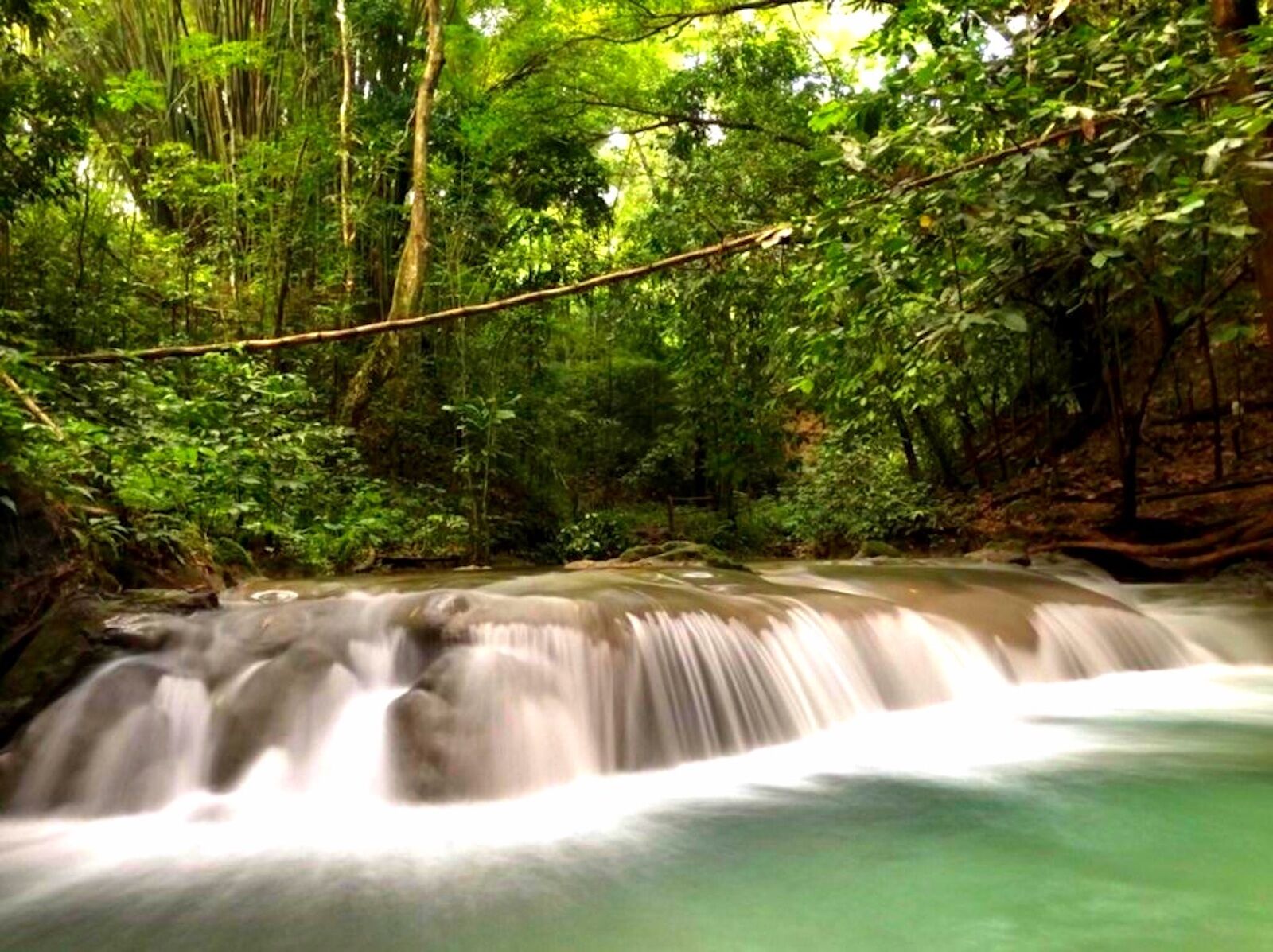 Another waterfall on the outskirts of Negril is Mayfield Falls. Mayfield Falls consists of 21 cascades on the Mayfield River, a tributary of the larger Cabarita River. Visitors need to cross a rustic bamboo footbridge to reach the falls, creating a beautiful photo backdrop.

Mayfield Falls is one of the few waterfalls in Jamaica on this list that does have a few amenities, including lockers, a small info stand where you can rent water shoes or hire a guide, and occasionally someone selling fresh fruit drinks. There’s also an entrance fee of $20 US.

This waterfall is both climbable and swimmable, and  if you hire a guide, you may even get treated to a complimentary foot massage or scrub with clay from the river banks. Mayfield Falls deserves a place in your next Jamaica itinerary if you’re anywhere remotely close. 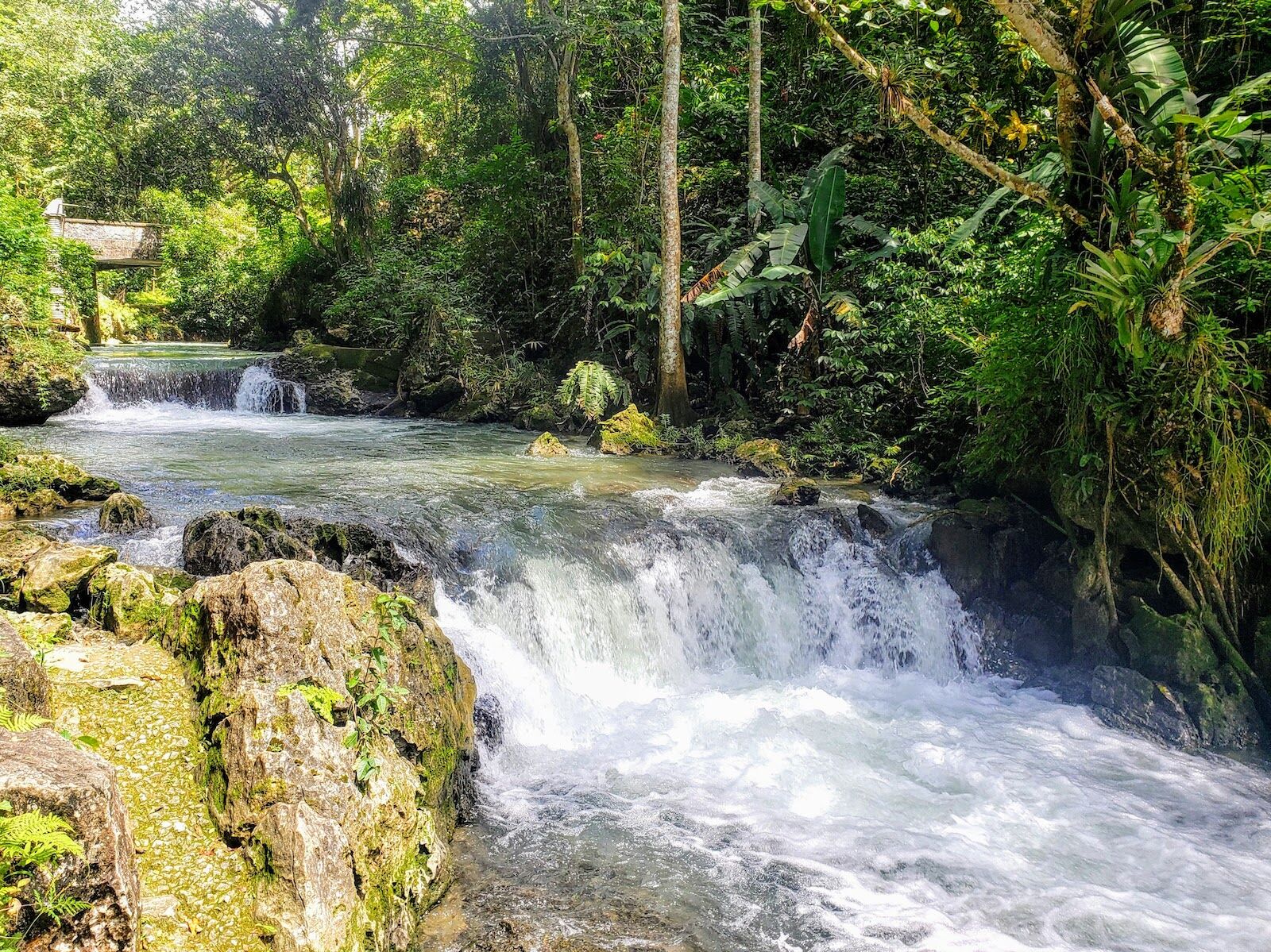 Noisy River Falls is in Manchester, one of Jamaica’s south-central parishes. Tourists seldom visit southern Jamaica, but these parishes are teeming with history, quaint towns, and secret swimming holes.

This waterfall is next to the B10 road in the remote district of Oxford. It gets crowded with locals on the weekend, and there are occasionally street parties taking place on the river on public holidays. While in the area, look at the old Oxford Bridge, built in 1869. 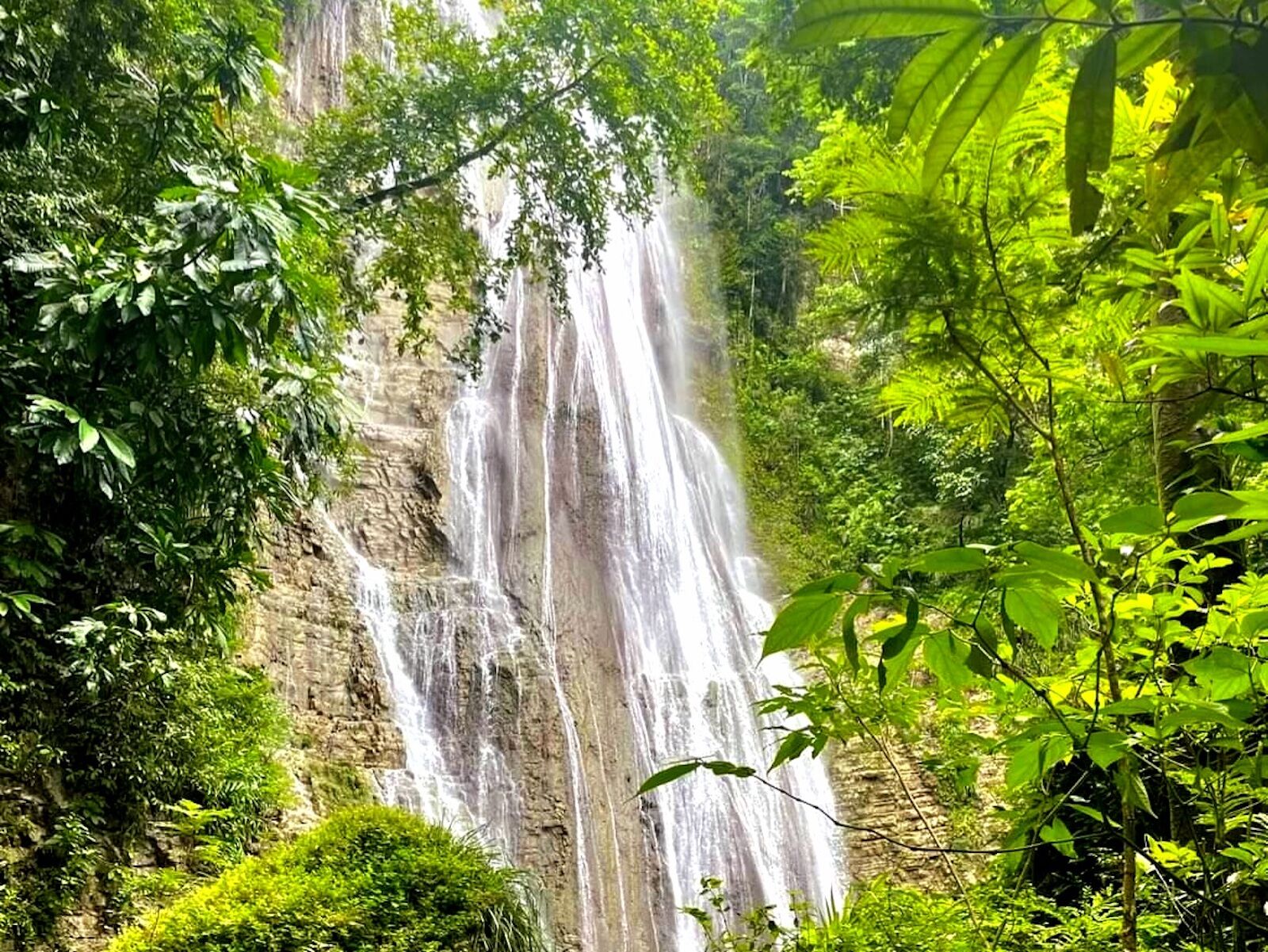 Okay, this is one of the few waterfalls in Jamaica you may find listed here and there in guidebooks, but for good reason: Nonsuch Falls is Jamaica’s tallest waterfall at 290 feet high.

It’s an adventurous hike to reach the falls as it’s in the thick Portland jungle near Jamaica’s north coast. A shorter trail leads to the top, but you can only appreciate the full grandeur of this waterfall from its base.

On the hike, travelers will usually spot endemic Jamaican birds, and if you go with a guide, expect to learn about the area’s rich Maroon and natural history. The Maroon people are proud descendants of runaway enslaved Africans who have lived in the rugged mountains for more than 300 years. Going to the bottom of the falls is only possible on a guided tour, which costs about $45 per person and should be booked online in advance. 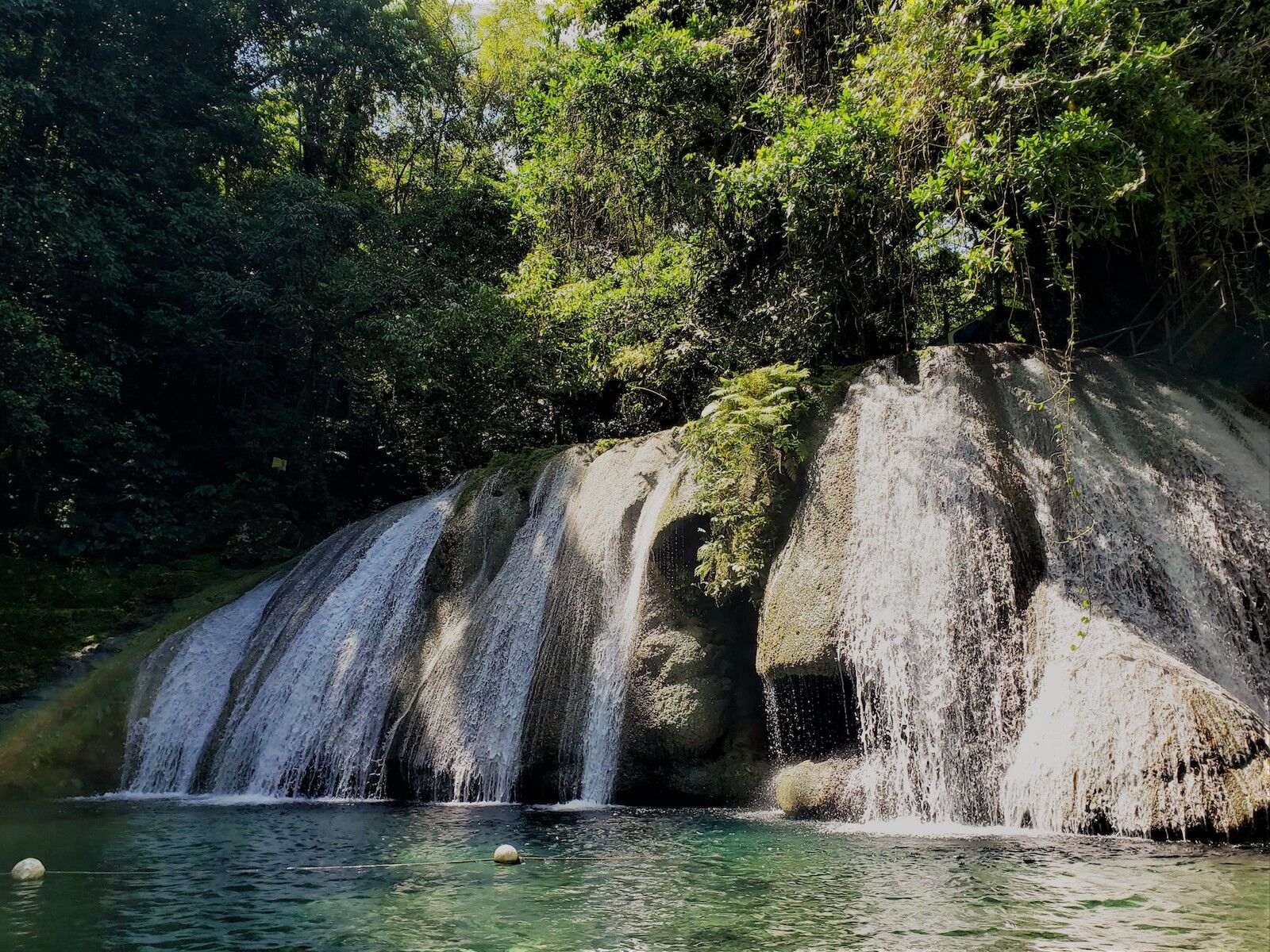 Reach Falls is in the montane forest of the Blue and John Crow Mountains in east Portland. It’s fed by the nearby Drivers River and is wider than it is tall. There are numerous swimming spots and underwater caverns at this waterfall, including a popular spot upstream known as the Rabbit Hole. You can also stand behind or under the main waterfall as it’s not too powerful.

There’s no hike to get to Reach Falls – only a staircase from the parking lot to the falls, winding through lush vegetation (and a $10 entrance fee). While there, it’s sometimes possible to spot wild boars charging through the hills if you’re lucky. Related: it’s said that this is also where Jamaica’s jerk style of cooking, often made with pork, originated. 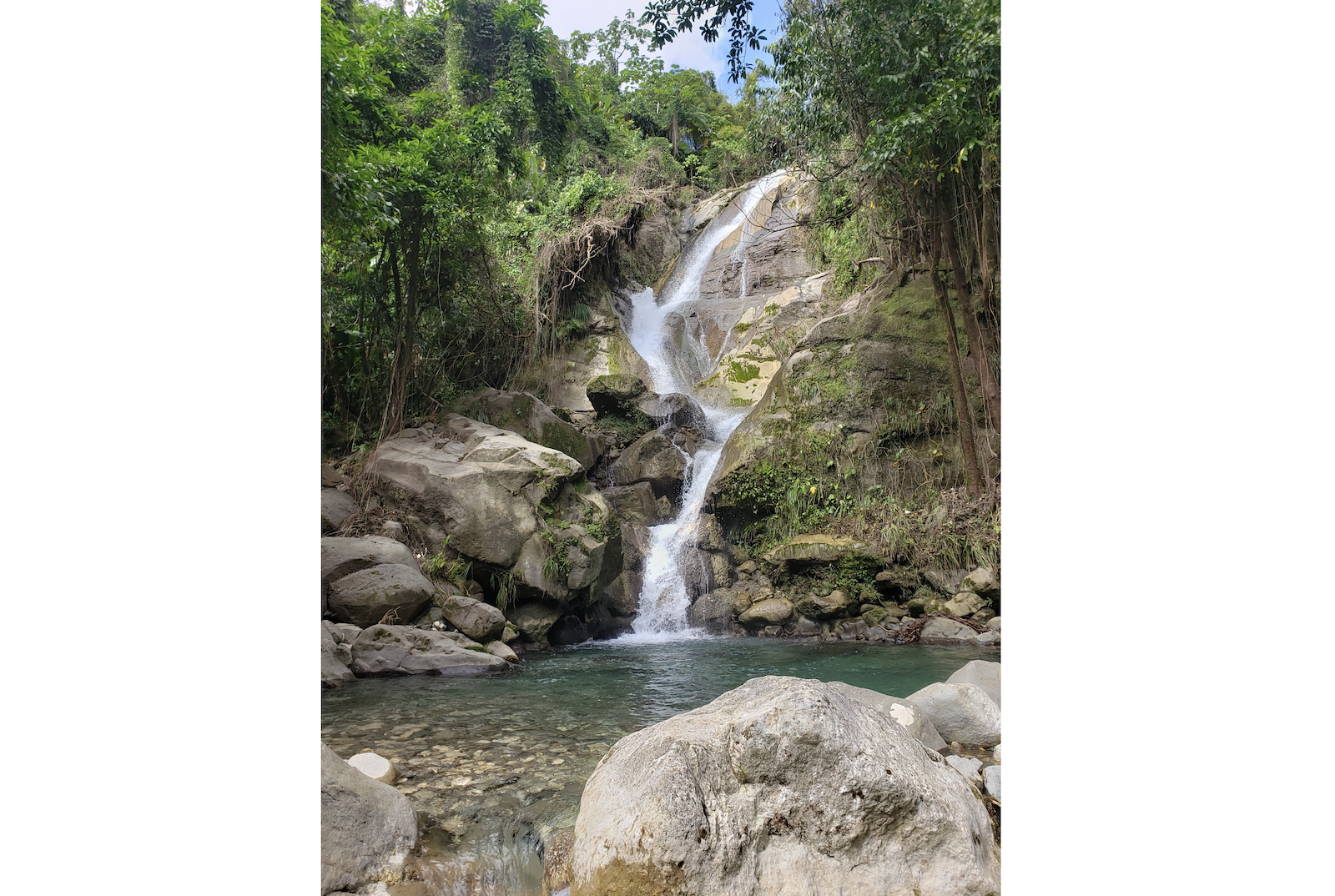 The falls in Millbank are the most remote waterfalls on this list and possibly in all of Jamaica.

Millbank is one of the secluded Maroon villages deep in the Upper Rio Grande Valley near Portland. This section of the Rio Grande river has twelve waterfalls, many of which are at least an hour’s hike apart and visited almost exclusively by Millbank residents and, occasionally, very adventurous tourists. You’ll probably want to find a guide online in advance since the hike is rather uphill and not always well marked. (I’ve used On the Edge Adventure Tours.)

Millbank is a great spot for birdwatching and you’ll likely pass places to try new tropical fruits (such as Otaheite apples) that grow wild on this side of Jamaica. Millbank is a beautiful part of the island, containing one of Jamaica’s last remaining untouched rainforests. 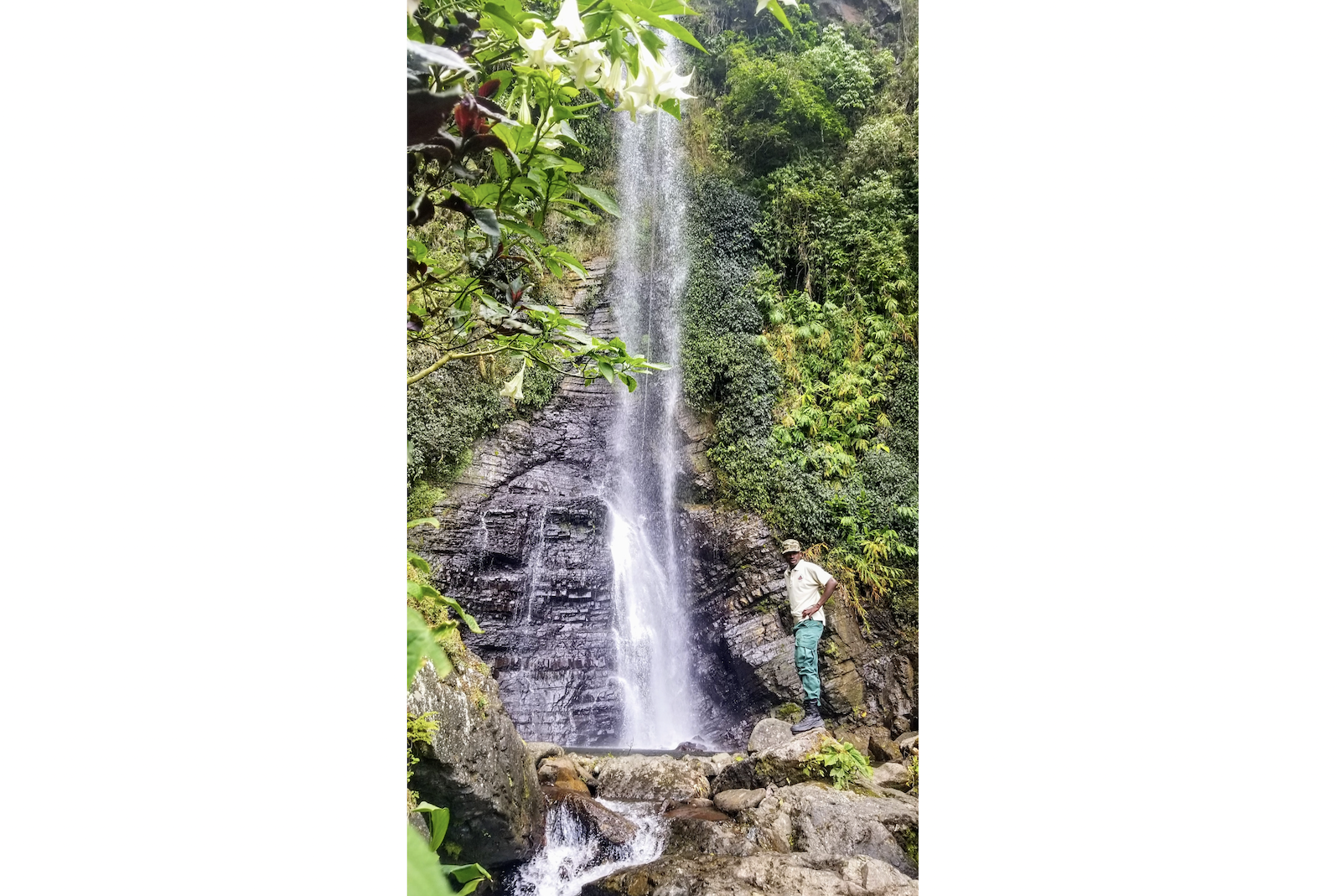 There’s no false advertising with the name of this community. The village of Cascade is home to numerous waterfalls, several of which are visible from the B1 road. The largest waterfall, also known as One Drop Waterfall, is 100 feet tall and accessible via a 20-minute hike from the main road.

Alternatively, you can also reach Cascade Falls via the nature trail from the nearby Holywell mountain park. And if you get hungry, no problem: you’ll find temperate fruits such as peaches and strawberries growing wild at this higher altitude.

Food + DrinkJamaica’s Jerk and Festival Bread Is the Ultimate Caribbean Pairing
Tagged
Beaches and Islands Outdoor Jamaica
What did you think of this story?
Meh
Good
Awesome